It wasn’t until I got married to Ren that I realized just how many interesting Filipino dishes I had missed out on as a child.

Unlike the kids from school who got excited over dishes like dinuguan, arroz caldo, and chicken tinola, I didn’t even know what many of those dishes were. Not that I was deprived or anything, it’s just that my brothers and I were never forced to eat Filipino food as children. We rarely even had adobo, growing up instead on a more western, kid-centric diet of fried chicken and pork barbecue.

I remember often seeing very Filipino dishes like bahay guya and stewed fish heads at the dinner table, but they were usually reserved for my parents and grandmother. I wasn’t forbidden to eat them, but as a kid, given the choice between a pig’s boiled uterus or crispy fried chicken lollipops, making that decision was never difficult. Add to that the fact that I was sent to the US for school at a young age, it became apparent that I wouldn’t develop a taste for Filipino cuisine until a much later time in my life, if at all.

Now a grown man, married, and again living in the Philippines, that time has clearly arrived. Thanks to this beautiful little tornado named Reneelicious, who lovingly whips up inspired dishes week after week, I finally get to catch up and enjoy all the delicious, culturally rich foods that I so missed out on in my youth.

I’ve said it before and I’ll say it again, I am, without a doubt, the luckiest man in the world. 😉 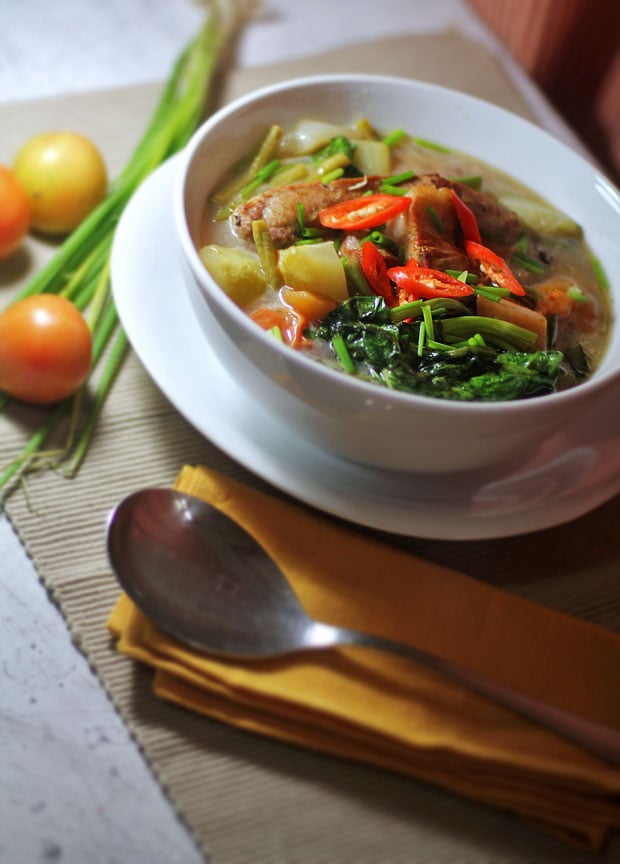 With all the recent frustrations surrounding the RH Bill, plagiarism, and that ridiculous cybercrime law, this Reneelicious sinigang dish provided much needed comfort from all the madness. Absolutely dee-licious, especially with the browned pieces of pork belly. 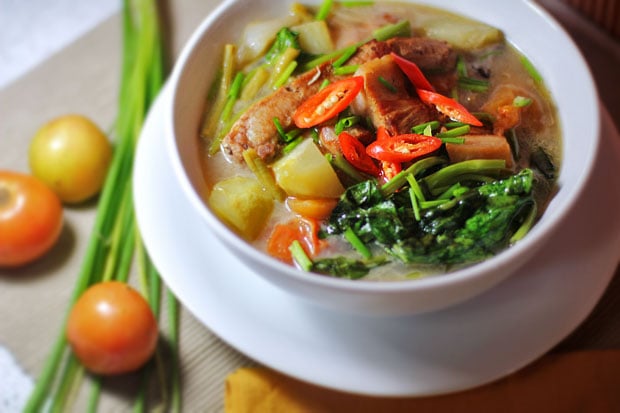 That though traditional Filipino sinigang is tamarind-based, some versions derive their sourness from ingredients such as guava, calamansi, bilimbi, or unripe mangos? Regardless of the souring agent, one ingredient that is never used to make sinigang sour is vinegar, because doing so will classify your dish less as a sinigang and more as a paksiw.

So, I just stumbled upon your blog today, and I have to say it's wonderful! This post, in particular, made my mouth water. Haha!

I too grew up not eating too much Filipino food. My Dad's not Filipino (French-Indian), and my Mum has been a flight attendant for a European carrier for a long time (meaning she has developed her taste in European food dramatically) which resulted in me knowing what prosciutto was before some Filipino dishes (I don't even know what bahay guya is. Sorry!). But when my Mum does cook Filipino food, something that has been happening more often, sinigang is one of my favourites. I love the idea of the coconut milk. I'm imagining it would be a bit like tom yum goon. Interesting idea!

Thanks for stopping by and the kind words Allie! We really appreciate it. :)

Yes, exactly! Ren meant it to be a Filipino-Thai fusion dish combining sinigang and tom yum goong. Are you a fan of both? If so, then you should definitely try it! Let us know how it goes. :)

Bahay guya is the term for immature chicken eggs. It's not a very common dish and I don't think a lot of Filipinos eat it. My mom loves it though. I've tried it and it's pretty good! You can find more information about it here:

That's great to hear Hilary! Glad you and your family enjoyed it. Thanks for trying it and letting us know. :)

Did you disable right clicking/context menus? That's how I look things up when I need to, and for some reason I can't right click/search like I usually do :-(

Otherwise, dig this - trying to learn to cook more Filipino dishes as the only white guy in a Filipino household, and I love this recipe!

Thanks for stopping by and trying the recipe Mike! To clarify, Ren's version isn't a traditional Filipino sinigang but her own Filipino-Thai version. Glad you enjoyed it. :)

Yes, I disabled right clicking on images but you can still copy and paste the text though. Hope that helps. :)

The Philippines is achingly beautiful with amazing, interesting food! You'd love it! :)