Thanks to the Parasite movie, ram-don became an internationally famous dish overnight. It refers to a Korean ramyeon or instant noodle dish called chapaguri, but made more luxurious with the addition of steak.

Sometimes referred to as “Parasite noodles”, ram-don is an absolutely delicious Korean dish that’s quick and easy to make at home. In this article, we’ll share with you a simple ram-don recipe and talk briefly about ramyeon and the significance of ram-don in the Parasite film.

No time to read this recipe for ram-don? Click on the save button and pin it for later! 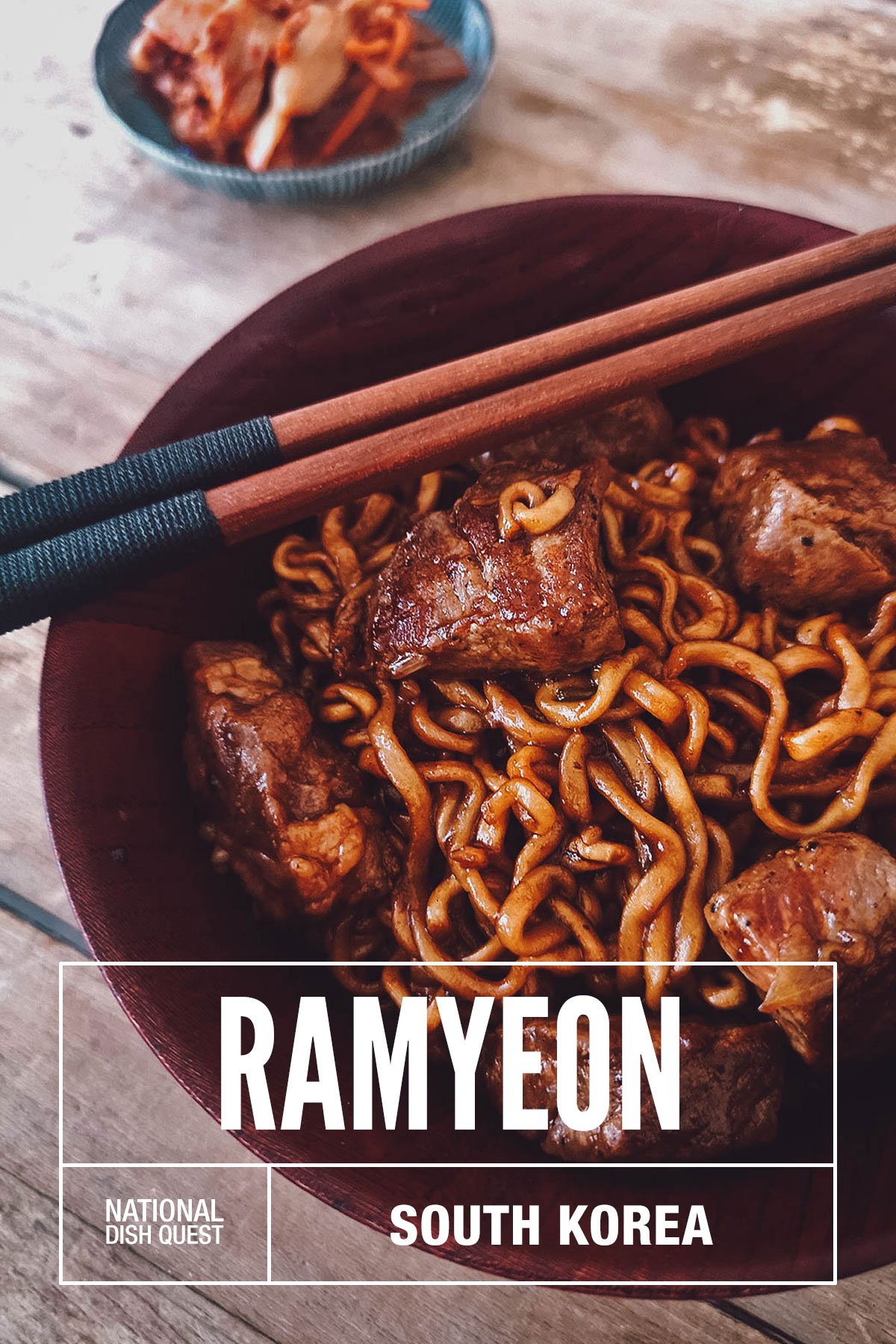 Ramyeon (or ramyun) is the Korean word for instant noodles. In Japan, ramen can refer to both instant or freshly made noodles but in South Korea, ramyeon always refers to instant noodles. Koreans consume so much ramyeon that it’s considered by many to be a South Korean national dish.

The biggest manufacturer of ramyeon in South Korea is the Nongshim company. They produce the two types of ramyeon – Chapagetti and Neoguri – that are used to make ram-don.

Chapaguri (or jjapaguri) is a hybrid dish made by combining two popular types of ramyeon – chapagetti and neoguri – into one dish. Chapagetti is a ramyeon version of the popular Korean-Chinese dish jajangmyeon, while Neoguri is a spicy seafood ramyeon made with thicker udon-style noodles.

As you may have noticed, “chapaguri” is a portmanteau word derived from chapa-getti and neo-guri. The dish started to become popular in 2013 after the combination was featured on a Korean TV show.

Based on what I’ve read, the translators of the Parasite film couldn’t translate chapaguri into something non-Korean speakers could relate to, so they referred to it as ram-don in the subtitles. “Ram-don” is a portmanteau word derived from ram-en and u-don, and from what I understand, it didn’t exist before the movie came out.

As it turns out, other meanings may have been lost in translation as well. In the movie, the ram-don was made with Hanwoo Beef, which is one of the most premium and expensive brands of beef in South Korea. In the subtitles, it was referred to simply as “sirloin”. More on why this is significant in the next section.

WHAT’S THE SIGNIFICANCE OF RAM-DON IN PARASITE?

Parasite is a film about social inequality and wealth disparity. It was clear from watching the movie that ram-don was meant to magnify the chasm between rich and poor. But I didn’t know what chapaguri was at that point so I didn’t fully grasp the symbolism at the time. (Warning: Spoilers ahead)

Chapaguri is made with two humble ingredients – Chapagetti and Neoguri. Ram-don is made with chapaguri and ultra-premium Hanwoo Beef. These three ingredients – two simple and one luxurious – are mixed together in a bowl to create ram-don, a symbolic dish that’s meant to represent the three families living together in the movie (two poor, one rich).

Knowing this, “sirloin” doesn’t seem like a strong enough translation for Hanwoo Beef.

Ram-don is quick and easy to make at home. You’ll need just three main ingredients – Chapagetti, Neoguri, and steak. (Please note that the links below are Amazon affiliate links)

Chapagetti is a type of ramyeon made by Nongshim. It’s the instant noodle version of jajangmyeon, a popular Korean-Chinese dish of wheat flour noodles topped with a thick sauce made from chunjang (sweet bean sauce), diced pork, and vegetables. Korean grocery stores and large supermarkets should have Chapagetti, but if you can’t find any, then you can order it from Amazon.

Also made by Nongshim, Neoguri is a type of ramyeon that’s known for its thicker udon-style noodles and spicy seafood flavor. You should be able to find it at Korean grocery stores and large supermarkets but if you can’t, then you can order it from Amazon.

We used rib eye but any cut of beef used for steak – like sirloin, rib eye, or New York strip – should be good.

Because ram-don is made with ramyeon or Korean instant noodles, it’ll take you no more than 10-15 minutes to prepare from start to end.

First, cut your beef into cubes.

Season the steak cubes with salt and pepper.

Add the steak cubes into a pot in one layer and then sear for about 40-45 seconds on each side. Set aside when done.

Pour the water into the same pot together with the vegetable flakes and just half of the Neoguri seasoning base. Adding in the whole packet will make it too spicy. Let it come to a boil.

Empty both packets of noodles into the water and allow it to cook for 4 minutes. Loosen and separate the noodles using tongs.

After 4 minutes, while there’s still some water left in the pot, add in the Chapagetti powder and oil. Mix thoroughly and toss until the sauce is fully incorporated with the noodles.

Turn off the heat and add the steak cubes. Toss again until mixed.

Serve the ram-don in a bowl with a side of kimchi. Enjoy!

If you like, then you can add other toppings as well like a fried egg. Personally, we love ram-don with the crispy edges of the fried egg. It’s so good!

Did you make this ram-don recipe? If you did and you enjoyed it, then we’d love it if you could give it a 5-star rating below. Kamsahamnida!

If you can't get a hold of Neoguri, then you can substitute it with another type of ramyeon like Shin Ramyun. The thicker the noodles the better.

As an Amazon Associate and member of other affiliate programs, I earn from qualifying purchases.

The nutritional information in this ram-don recipe is an estimate based on third-party calculations. It should not be considered as a substitute for a professional nutritionist’s advice.

Did you try this recipe?

We'd love to hear what you think! Leave a comment below and tag us on Instagram @_willflyforfood_

This recipe for ram-don contains affiliate links which will earn us a small commission if you make a purchase at no additional cost to you. We really appreciate your support as it helps us make more of these free user guides. Thank you!