Whenever we meet new people, we ask them this hypothetical question: “If you were to die tomorrow, what would your last meal be?”. It’s basically just a more colorful way of asking “what’s your favorite dish?”

The vast majority of people name dishes that remind them of their childhood. Something that brings them back to simpler times and gives them a sense of comfort.

For many Filipinos, that would be dishes like sinigang or pork barbecue. For me, it would be silog. Specifically, longsilog.

I’ll get to it in more detail in this article but silog refers to a family of Filipino dishes that are typically eaten for breakfast. If you’ve been turned on to silog and want to learn more about this delicious and comforting Filipino breakfast dish, then you’ve come to the right place.

No time to read this article on Filipino silog? Click on the save button and pin it for later! 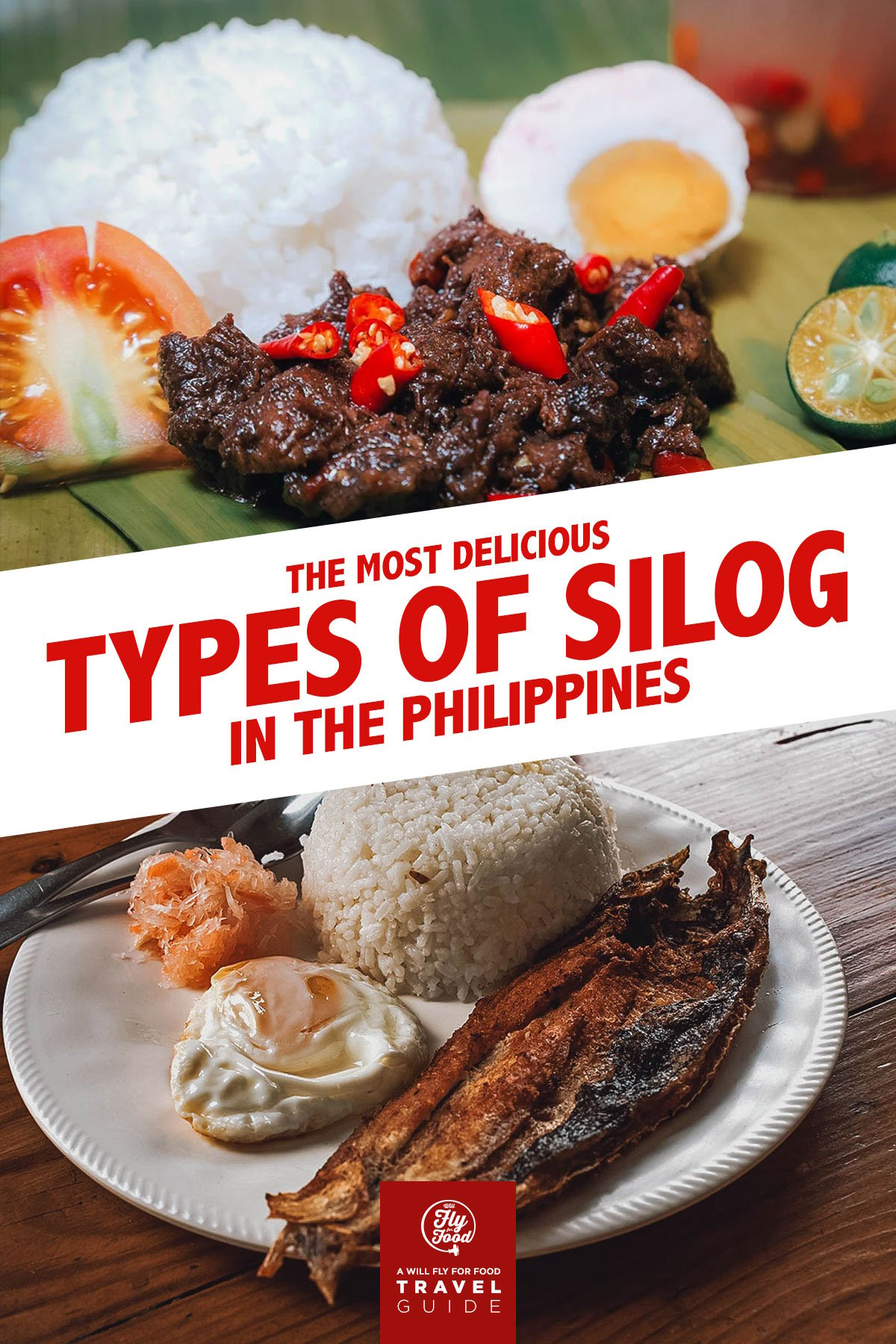 Photos by aldarinho and MDV Edwards

WHAT IS FILIPINO SILOG?

Silog refers to a family of Filipino breakfast dishes consisting of some type of meat, garlic fried rice, and a fried egg. If you’re familiar with Malaysian or Singaporean food, then you can think of it as the Filipino version of nasi lemak.

There are many different types of silog. The dish takes the name of whatever meat it’s made with so silog served with beef tapa (cured beef), for example, is called tapsilog. Longsilog features longganisa (Filipino sausage), bangsilog is made with bangus (milkfish), and so on and so forth.

The full name of the dish is actually a portmanteau word for the three main ingredients that make up the dish. The Filipino word for garlic fried rice is sinangag while a fried egg is called itlog. Put them all together with the viand and you get something like this:

Here’s a quick breakdown of a silog’s components:

Some Type of Meat (Viand)

Silog can be made with pretty much any type of meat or fish. I’ll talk about some of the more common versions of silog later in the article but the three most popular are beef tapa, longganisa, and tocino (cured pork).

As described, sinangag is the Filipino word for garlic rice. It refers to a delicious type of fried rice made with steamed white rice, salt, and lots of garlic.

Itlog, in Filipino, means “egg”. It can refer to any type of egg – hard-boiled, soft-boiled, poached, scrambled, etc. – but silog is usually made with sunny side up fried eggs.

Silog is typically served with a spicy vinegar dip. Some people may enjoy it with other side dishes and condiments as well like pickled papaya or slices of fresh tomato.

THE HISTORY OF SILOG MEALS

Aside from tapsilog being the very first type of silog, I didn’t know too much about the history of silog so I did some digging. According to Esquire Philippines, the term “tapsilog” was coined by a restaurant owner named Vivian del Rosario in the mid-1980s.

In 1986, she opened a canteen (humble restaurant) in Quezon City that catered to the working class. Called “Tapsi ni Vivian at Bulaluhan”, she offered bulalo (beef marrow soup) and a garlic rice dish with beef tapa and fried eggs. She called this garlic rice dish “tapsilog” and the rest is history.

Filipinos enjoyed tapsilog so much that over time, many other variations like longsilog, tocilog, bangsilog, and spamsilog would become just as well-known throughout the Philippines.

THE MOST POPULAR TYPES OF SILOG

Because silog meals can be made with any type of viand, there’s no limit to the number of silog variations you can make. You can throw a bunch of Cheetos on a plate with garlic rice and a sunny side up egg and call it cheetosilog.

I don’t think you’ll find cheetosilog on any restaurant’s menu soon, but here are some of the most popular types of silog you can enjoy in the Philippines.

Any Filipino restaurant that serves silog will likely offer these first three options.

As described, tapsilog is the OG when it comes to Filipino silog. It consists of beef tapa that’s been pan-fried and served with garlic rice and fried eggs.

Tapsilog is by far the most popular type of silog in the Philippines. If you’re trying silog for the first time, then I recommend ordering the tapsilog.

Photo by aldarinho via Depositphotos

Tapsilog may be the most popular but for me, longsilog is the best. It consists of Filipino longganisa sausages served with garlic fried rice and eggs.

One of the reasons why I prefer longsilog is because of the variety. There are many regional types of longganisa sausage in the Philippines, unlike beef tapa where the only real difference is in the quality of the meat.

Some of the most popular types of Filipino longganisa include Lucban, Calumpit, Pampanga, and Chorizo de Cebu, but my hands down favorite is Vigan longganisa. It’s a small but intensely garlicky type of longanisa from the city of Vigan in Ilocos Sur.

Pictured below is a plate of longsilog with Vigan longanisa. This was from a hotel in Taal Heritage Town so it’s a little fancier than normal. Aside from the main components, on the plate is a seasoned fresh tomato, adobong kangkong (water spinach), and pickled shredded papaya.

Tocilog is the third of the big three silogs. It’s made with Filipino tocino, which is sweetened and cured pork belly. The pork is cured for several days in a saltpeter mixture that tenderizes the meat and gives it a characteristic pinkish red color when cooked.

As a kid, tocilog was my favorite type of silog because of the sweetness and softness of the meat. The sweet-savory flavor of the pork goes so well with the spicy vinegar dip.

Photo by junpinzon via Depositphotos

OTHER COMMON TYPES OF SILOG

The previous three are the most common but if you’re lucky, then you may be able to find these other types of silog in the Philippines as well.

Bangus (milkfish) is the national fish of the Philippines so it’s no surprise to find it on a plate of silog. If the big three silogs were to become a quartet, then bangsilog would be the fourth.

Bangsilog is made with marinated milkfish that’s been butterflied and fried. If you see bangsilog on a restaurant’s menu, ask if the bangus is boneless. Bangus that hasn’t been deboned can be a pain to eat.

Dangsilog is another of my favorite types of silog. It’s similar to bangsilog except it’s made with a different type of fish called danggit (rabbitfish). Danggit is much smaller and less meaty than bangus so it becomes supremely crispy when fried.

As you can probably guess from its name, spamsilog is a type of silog made with every Filipino’s favorite brand of luncheon meat – SPAM®.

Cornsilog refers to another type of silog made with meat from a can, this time corned beef. You can make it with just pan-fried corned beef but for the best experience, I suggest throwing in some diced potatoes, onions, and a dash of Tabasco sauce. Seriously YUM.

Like spamsilog, it’s pretty obvious what hotsilog is made with. It’s made with commercially produced Filipino hot dogs that have been tinged bright red with food coloring.

I don’t know how or when the practice started, but I believe these hot dogs are tinged red to make them more appealing to children. Like sweet Filipino spaghetti, they’re a staple at children’s parties in the Philippines.

Hotsilog is one of the few silogs on this list that may pair better with banana ketchup than vinegar. As its name suggests, it’s a sweeter type of Filipino ketchup made with bananas.

Can I please shake the hand of the person who first thought of this? Bacsilog is a genius type of silog made with crispy bacon as its main component.

As previously described, silog is like the Filipino version of nasi lemak. My favorite versions of nasi lemak are made with a piece of fried chicken, so it’s no surprise that crispy chicken wings or drumsticks work great with silog as well.

Adobo is the national dish of the Philippines so it only made sense to throw some on a plate with garlic rice and a fried egg.

For the uninitiated, adobo refers to a dish and cooking method that involves slowly simmering meat (usually pork and/or chicken), seafood, or vegetables in a braising mixture of soy sauce, vinegar, garlic, bay leaves, and black peppercorn.

If pork chops are your jam, then go for a plate of porksilog. It’s a type of silog made with golden brown hunks of pork loin deep-fried to crispy perfection.

Last but definitely not least is sisilog, a type of silog made with pork sisig as its meat component. Pork sisig is a hugely popular Filipino bar chow dish made with chopped pork face, ears, and chicken liver served on a sizzling plate.

If you’ve never had Filipino food, then the one dish I’d advise you to try first is pork sisig. It’s an incredibly delicious dish that tastes even better with garlic rice and a fried egg.

Every type of silog has its appeal but first-time visitors to the Philippines should definitely try one of the big three first. They’re widely available throughout the Philippines so you should have no problem finding them.

Of the three, tocilog may be the weirdest. The pork’s sweet flavor and pinkish-red hue may be off-putting for non-Filipinos, so you may want to go with something more familiar first like tapsilog or longsilog.

No matter the type, Filipino silog is a delicious and filling breakfast dish. It’s a great way to start the day no matter where you are in the Philippines.