Big flavor, bright colors, amazing textures and aromas, and most of all, loving family to share it all with: who wouldn’t want all these things?

Now, with the arrival of Filipino food on the mainstream food scene, all this and more is in reach. But what is Filipino food really? What makes it so great? Not to worry, dear reader. Your questions will soon be answered: this is your guide to Filipino food, the next big food trend. 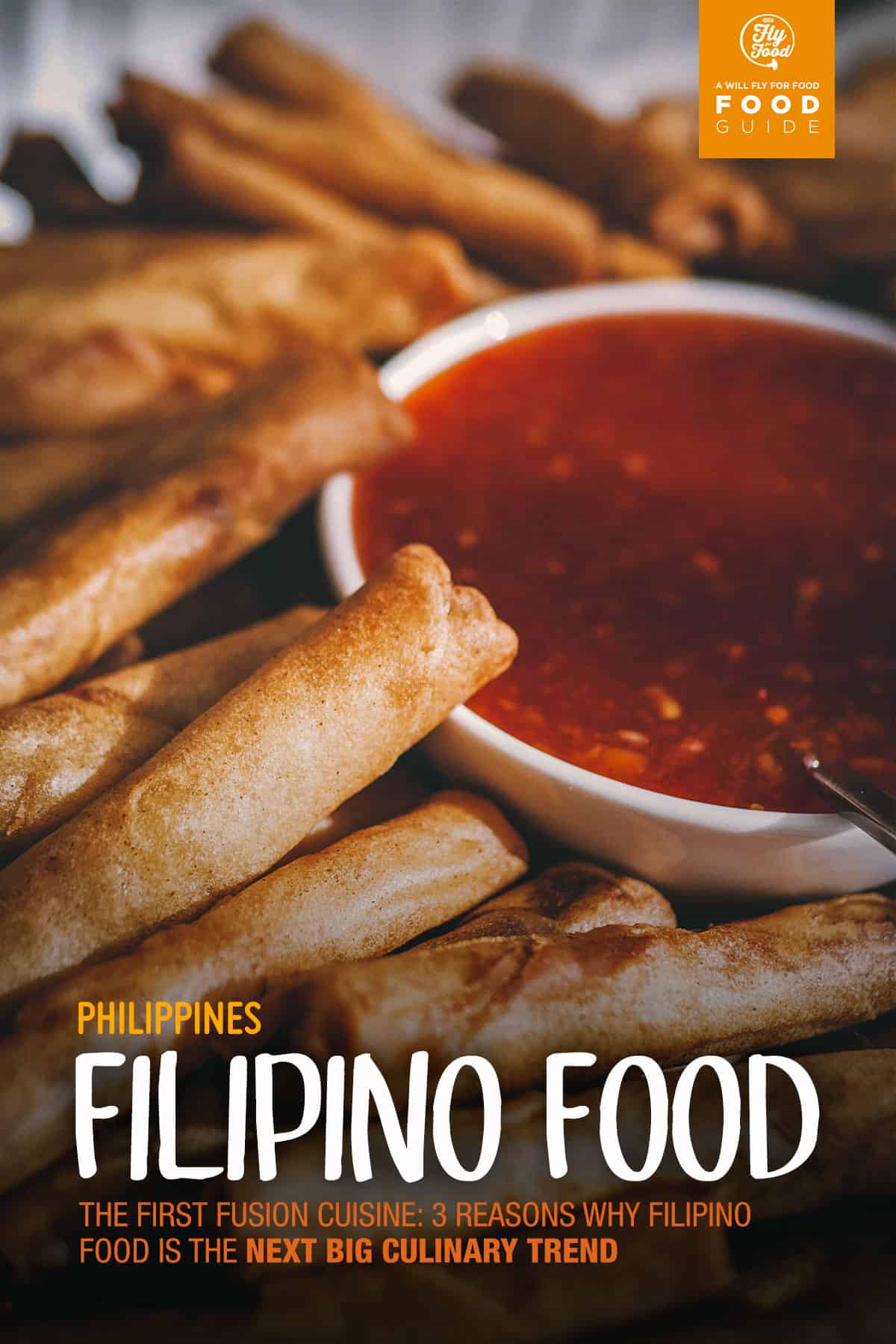 AN INTRODUCTION TO FILIPINO FOOD

What’s referred to as Filipino food is actually an umbrella category for all the different kinds of food located throughout the Philippine archipelago. And because the country is built the way it is – three groupings of islands spread north to south – the various peoples who populate the country have very different approaches to food.

Coastal areas often have great access to fresh seafood; consequently, they often serve their food raw, or with some lemon or vinegar on the side. On the other hand, inland dwellers have a practice of food preservation called buro, in which rice, vegetables, or fruits are buried and allowed to ferment, to intensify their flavor and prolong their shelf lives.

As a former Spanish colony, the Philippines has also been very deeply impacted by Spanish and Latin influences. The last name Cruz is almost ubiquitous in the country, and Christianity is the most commonly practiced religion.

Spanish influences are also unmistakable in Filipino cuisine as well: European techniques such as braising and roasting are applied to local ingredients, resulting in delightfully savory dishes like caldereta, braised beef or goat in a sauce of tomatoes and peppers.

At this point we will skip the clichés, and instead of calling Filipino cuisine a melting pot of Malay, Chinese, and Spanish flavors, and instead refer to it as proto-fusion cuisine. Long before Asian flavors couched in French techniques were made available to western diners, the Philippines had been bringing together indigenously Southeast Asian ingredients with Spanish culinary sensibilities, giving birth to food that satisfied both belly and soul.

SO WHAT’S THE BIG DEAL WITH FILIPINO FOOD?

Always a valid question. Maybe answering this question would be easier if it were taken apart a bit. What makes Filipino food so great? Why the interest in it now, even though it’s technically been around for hundreds of years?

The second question might be easier to answer: an estimated 10% of all Filipinos have permanent or semi-permanent residences in countries other than their own, totaling about 8 million people.

Inevitably, this large immigrant population established little pockets of home in their new countries; Los Angeles, one of the most cosmopolitan cities in the US, actually has a portion of it called Filipinotown. Urban adventurers would wander into these small bites of foreign culture, and would come home with tales of wondrous flavors and new experiences: the birth of interest in foreign food in general, and Filipino food in particular.

As to why Filipino food is amazing, here are some of the best reasons.

Butchers will tell you that the choice cuts of meat are always the most expensive. The loin, small and tender as it is, is highly sought after, and quite expensive per weight. On the other hand, flank cuts are generally very tough, large, and less choice. Consequently, this cut costs less.

Filipino food is comprised almost completely of less choice cuts of pork and beef. One dish – discussed below – even uses peeled pork face as the featured ingredient! These cuts are often simply tossed out, but Filipino ingenuity has turned these rejected parts into something delicious, without putting a major strain on the budget. This characteristic also makes it very popular with caterers.

Sour. Sweet. Salty. Savory, smoky, fatty. Filipino food is all of these things, sometimes all at the same time. Chef, host, and renowned food adventurer Andrew Zimmern has gone on record to say that Filipino food is going “to keep getting more and more popular simply because of the variety of ingredients and European techniques that are found in that food”.

Food writer Claudia McNeilly has cataloged her travels through various Filipino eateries in the US, saying “The palate of Filipino food is entirely its own, relying on acids and sweetness perhaps more than any other cuisine.” Foodies looking for a bold, unique experience will certainly be well-rewarded when taking a stroll through Filipinotown or similar enclaves of Filipino culture.

Individual entrees and solo dining are anathema to Filipino food, which are usually served family-style and are almost universally designed to be consumed with friends and family. Great platters of pancit (noodles with assorted toppings) or bowls of adobo (chicken or pork simmered in soy sauce, vinegar, and various spices) probably weren’t meant to be eaten by a single person.

The effort needed to prepare these dishes can be spread out over the larger volumes of food, compared to the care and attention needed for individual pieces of steak or fish. Cooking many of these for a large family would take many hours of work, compared to whipping up what is essentially a large pot of stew, allowing it to simmer, then focusing on other tasks.

WHAT TO ORDER: A (VERY SIMPLIFIED) FILIPINO MENU

Ready to head over to your nearest Filipino restaurant? Here’s what you should look for when you look over their menu. 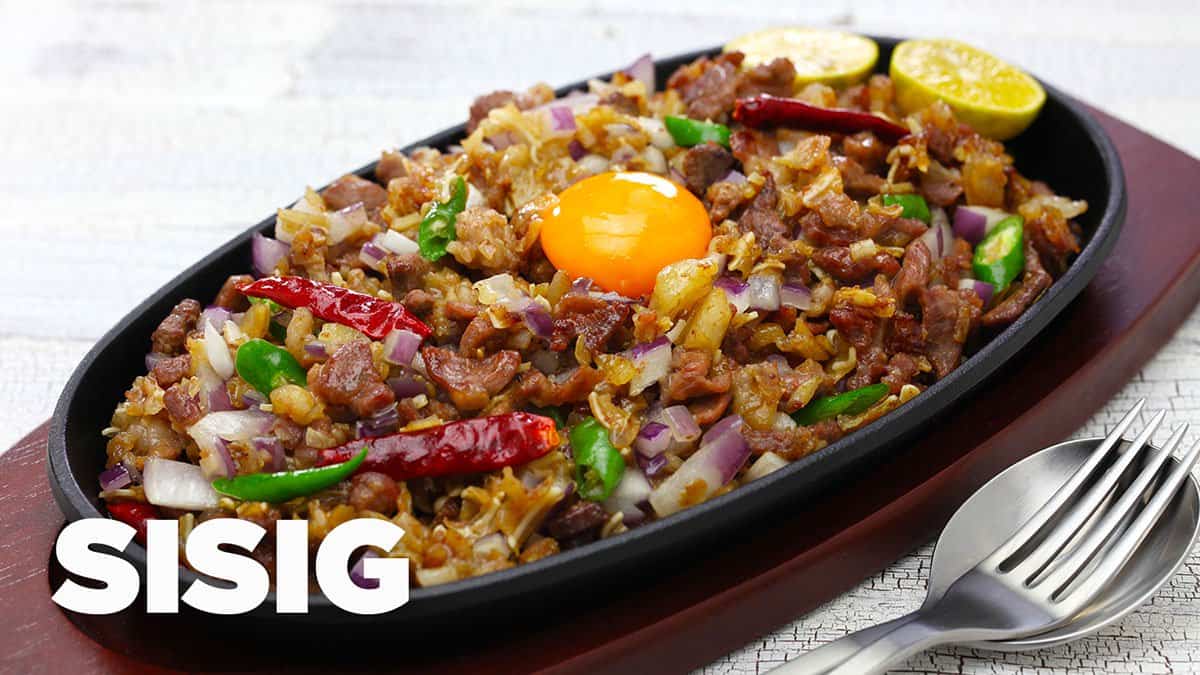 The first dish on this list is probably the one that Filipino immigrants most long for, because its star ingredient – minced pork face – is pretty difficult to come by in the US. Substituting this for other pieces of pork is the preferred alternative.

The pork undergoes a transformation into a grilled, savory dish, after it’s been grilled, minced, and sautéed with onions, vinegar, soy sauce, liver spread, and other secret ingredients. It’s the preferred Filipino beer chow – Filipinos call these dishes pulutan – and has been reimagined featuring other proteins including minced chicken, bits of fish, or even fried tofu. 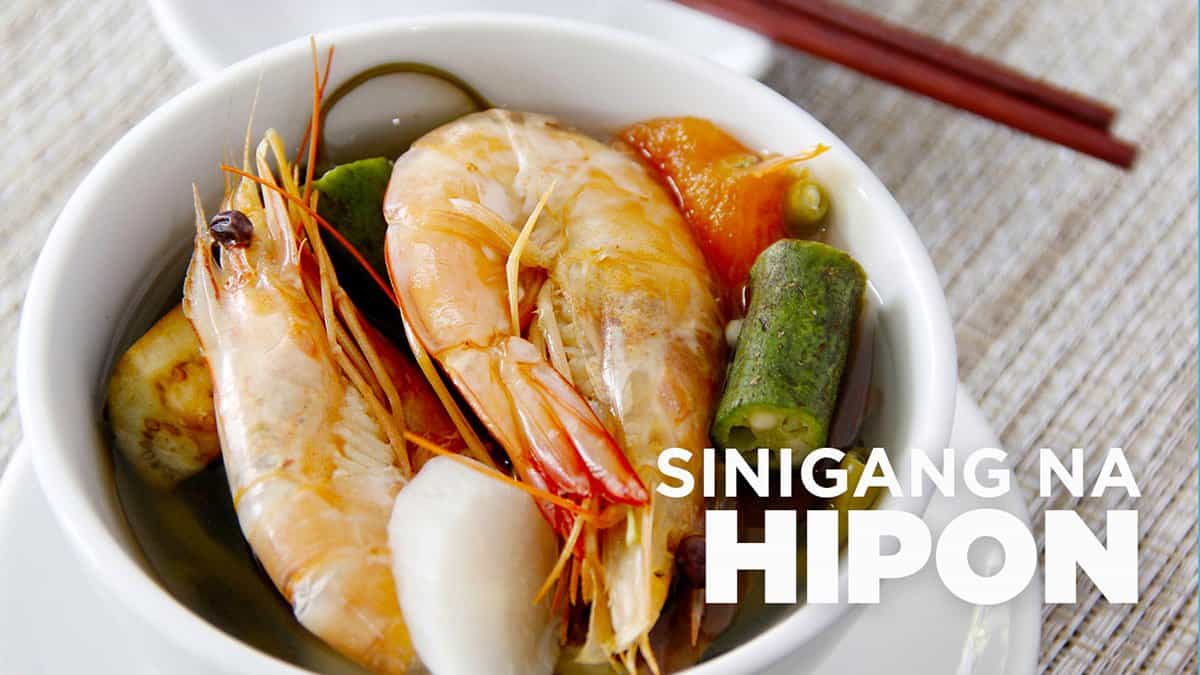 Fans of tom yum or laksa will feel right at home with this nourishing, sour dish. Halfway between a soup and a stew, sinigang always begins as a broth soured with a fruit or vegetable: tamarind, mango, or the endemic lemon calamansi are all popular choices for a souring agent. Into that broth go pieces of beef, pork, fish, or shrimp, adding further complexity to the soup, which is finished with a slew of vegetables. Popular choices are water spinach, jicama, string beans, and sweet potato. 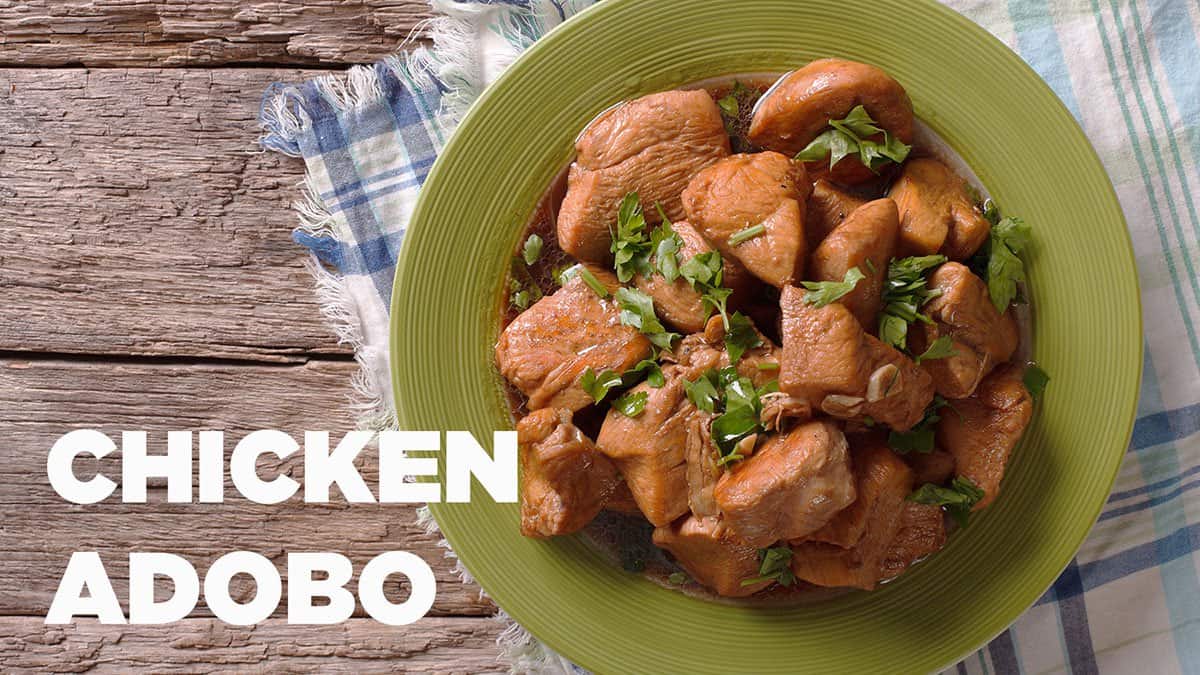 A true fusion dish that takes its name from the Spanish word for marinade, adobo gained prominence after former US President Barack Obama mentioned that he indulged in it from time to time, thanks to the White House’s Filipino-American chef. A stew of braised pork or chicken in a braising liquid of vinegar, soy, and spices, adobo is often served over rice, with a siding of pickled papaya or fresh cut tomatoes. 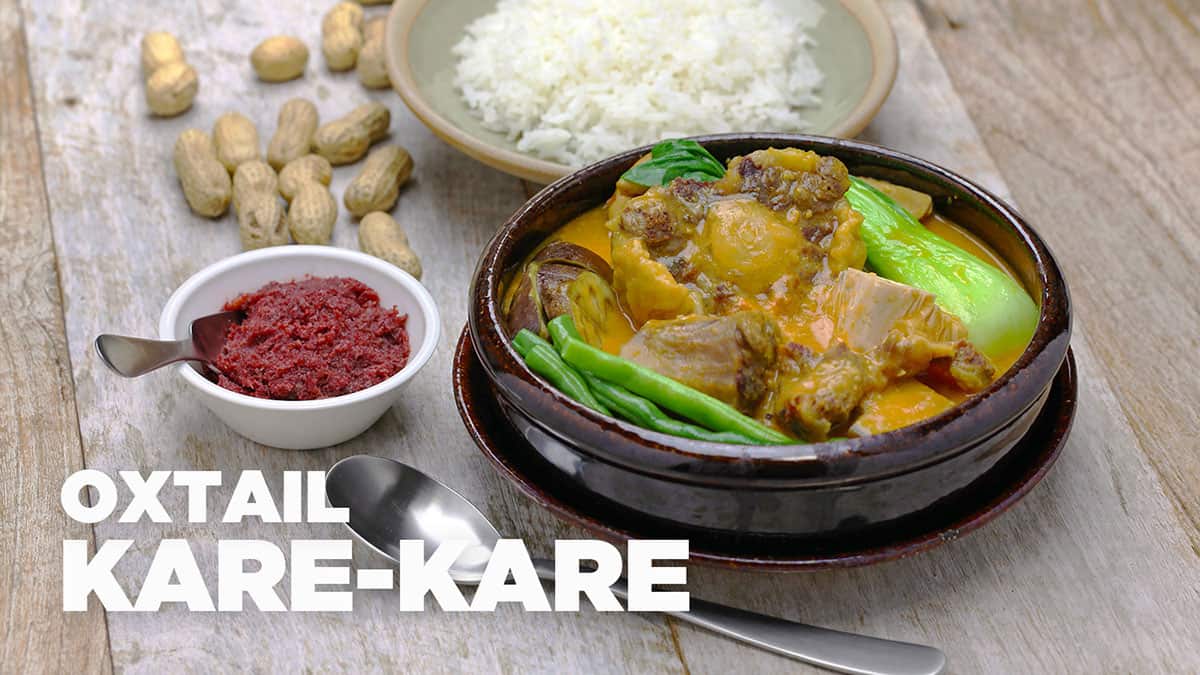 An unctuous, heady stew of oxtail, tripe, and vegetables in a sauce of ground peanuts, kare-kare features offal and rejected cuts of meat much like sisig, making it rather difficult to come by in its authentic form. Substituting shank and other tougher cuts of meat is a popular choice, and results in a sauce that is rich and mouth-filling. This dish is usually served with bagoong, a fermented shrimp paste that adds another layer of complexity to the dish.

Because it’s easy on the pocketbook, complex in its flavor profiles, and great for sharing with friends and family, Filipino food is poised to be the next star of the culinary scene. Add to this the preponderance of Filipinos throughout the world, and it wouldn’t be any surprise if Filipino restaurants soon became as commonplace as pizzerias and burger joints.

Born into a family of talented cooks, Pamela Sanchez is an aspiring chef with an immense passion for cooking. She now pursues that dream of becoming a culinary expert. Currently, Pam is testing out her writing skills and regularly contributes to theurbanpear.com.