Food in the Philippines: 14 Must-Try Dishes

Three years ago, Andrew Zimmern proclaimed Filipino food to be the next great thing. So why hasn’t it really happened yet?

One reason, as food writer Joanne Boston speculated, is that people need to get over the potential “ick” factor that accompanies certain Filipino dishes. She’s right.

It’s second nature to us Filipinos (and Asians in general) to eat things like offal and animal heads but we can’t expect the same from Westerners. Not everyone is like Andrew Zimmern.

Apart from this French guy I went to school with, I’ve never seen anyone devour balut (duck embryo) with as much gusto as Andrew once did on TV. It was glorious.

Filipino food may not be as pretty as other cuisines like Japanese or Korean, but what we lack in presentation we more than make up for in flavor. Bottom line, Filipino food is damn tasty.

If you can get past that “ick” factor, then you’ll realize what Andrew did three years ago — Filipino cuisine is delicious.

Here are 14 Filipino dishes that every first-time visitor to the Philippines should try.

No time to read this Filipino food guide now? Click on the save button and pin it for later! 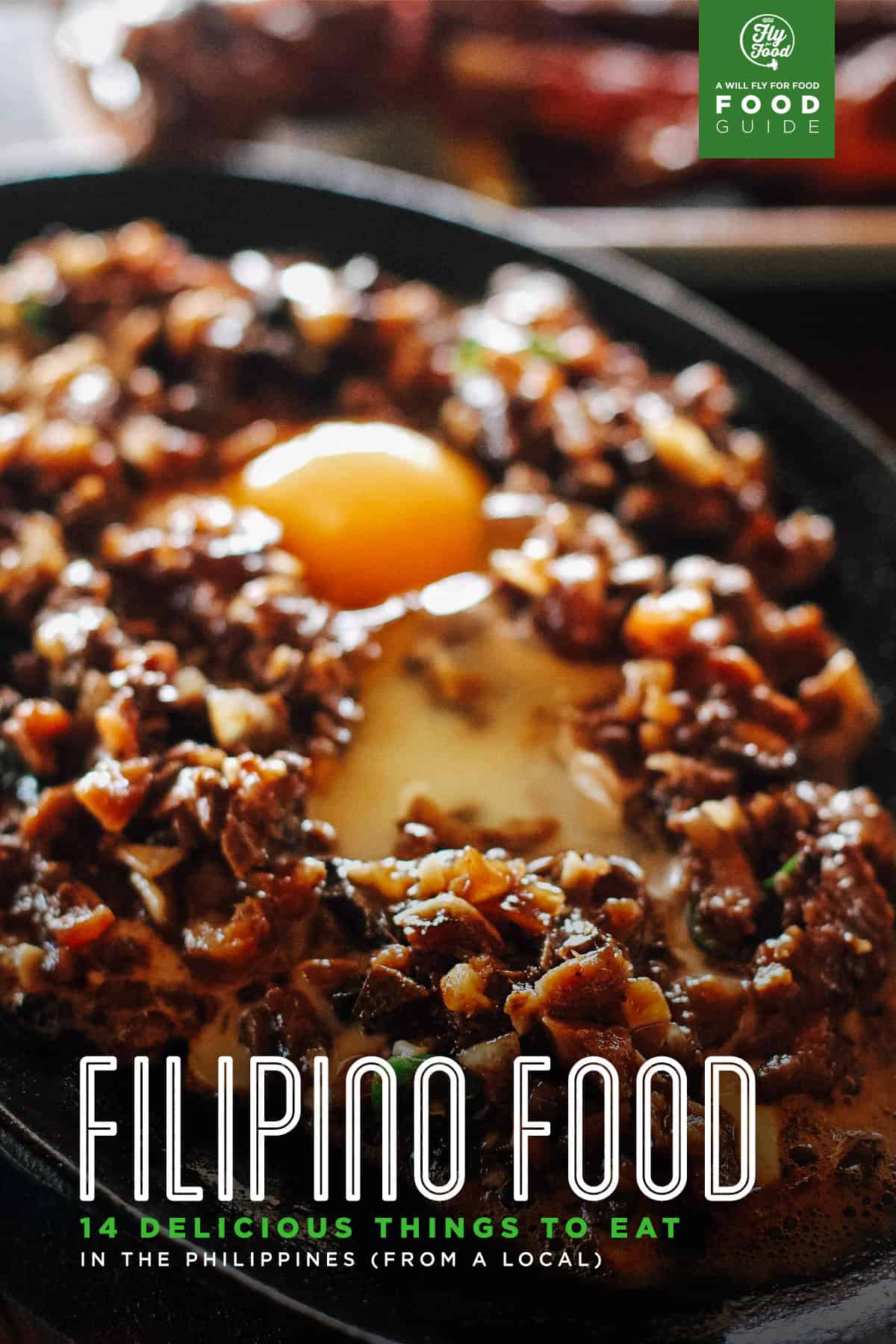 Tapsilog is a beloved Filipino comfort dish. The way we Filipinos feel about tapsilog can probably be compared to how Malaysians feel about nasi lemak. Personally, it’s a strong contender for my hypothetical last meal.

Tapsilog is a portmanteau word for tapa (cured beef) + sinangag (garlic fried rice) + itlog. It’s the most popular type of Filipino “silog” breakfast made up of garlic fried rice, egg, and a protein. 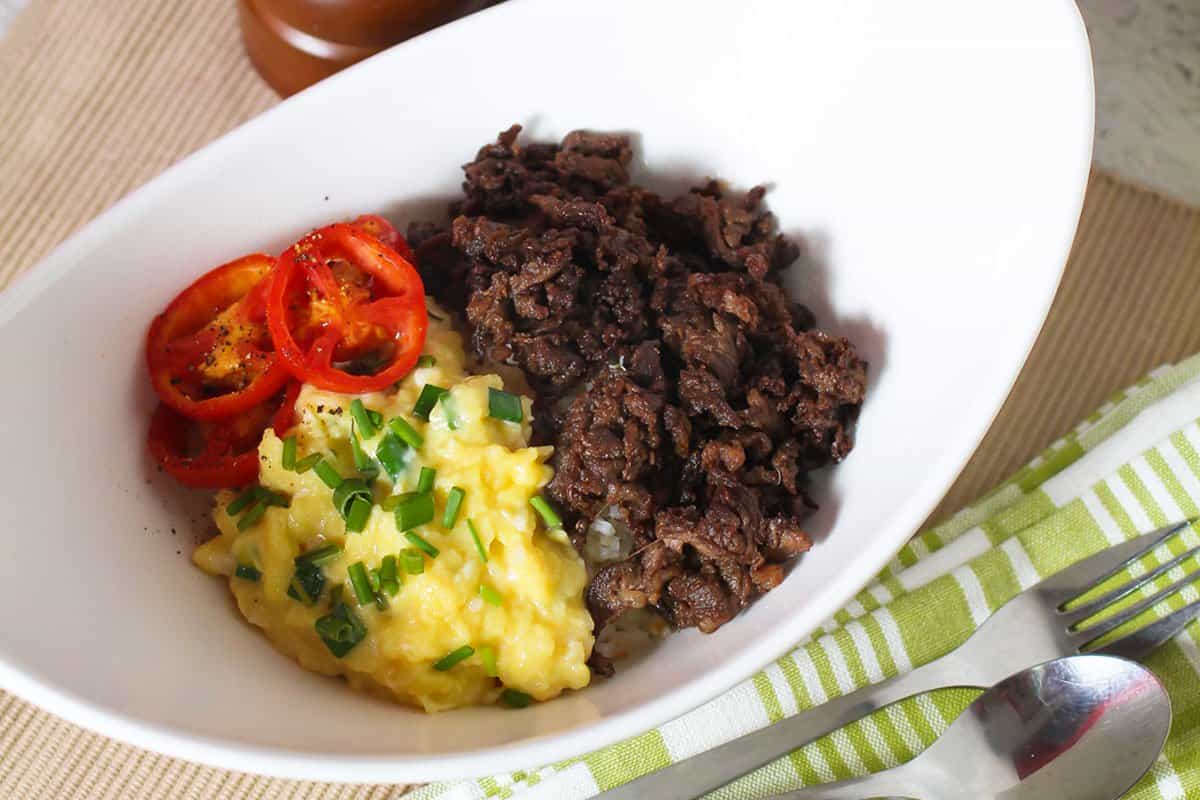 Inasal refers to chicken marinated in a mixture of lime, pepper, vinegar, and annato. It’s grilled over hot coals while being basted with the marinade.

Our favorite inasal restaurant in Manila is a little known place called Bacolod Chicken Parilla. It’s tucked away in a residential neighborhood in Quezon City. 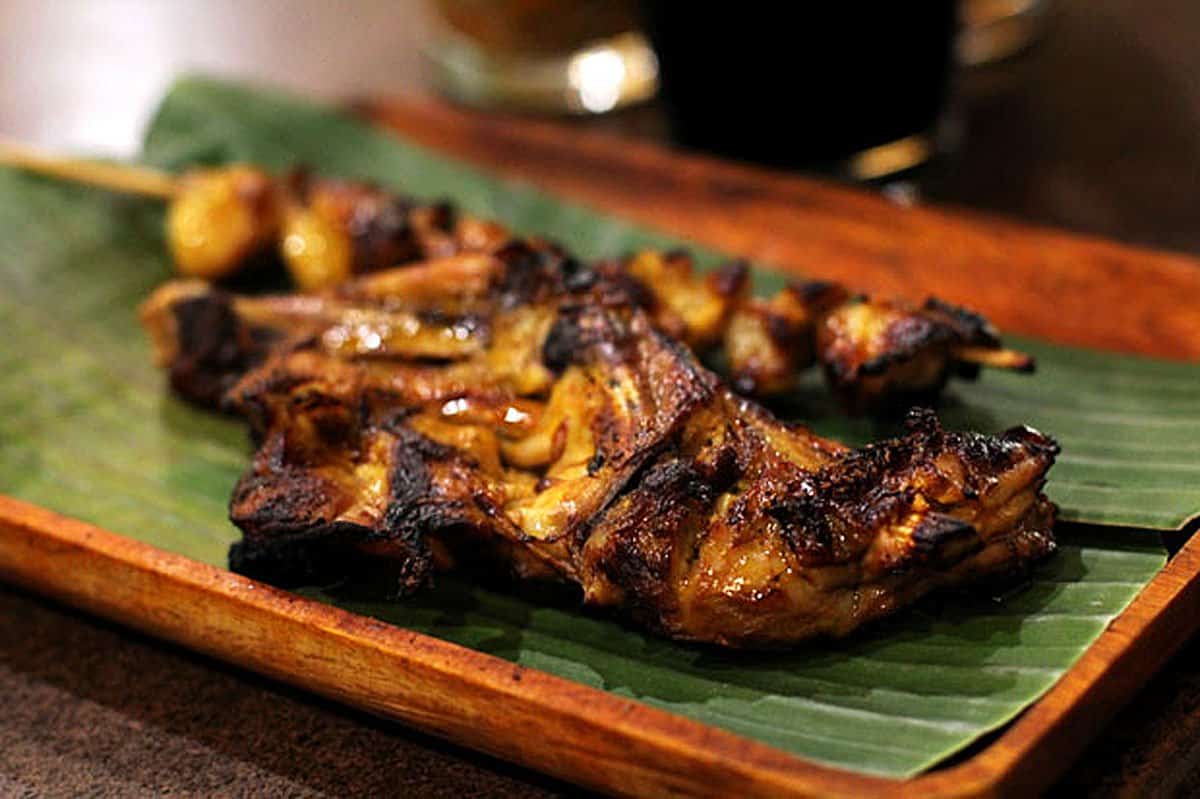 Pork sisig is perhaps the single most iconic Filipino bar chow dish. It’s made from chopped pig’s face, ears, and a generous amount of chicken liver. It’s usually seasoned with calamansi (calamondin) and chili peppers and served sizzling on a cast iron plate.

Originating from the Philippines’ (unofficial) culinary capital of Pampanga, it’s a hugely popular Filipino dish that’s become ubiquitous at bars and Filipino restaurants throughout the country. Andrew Zimmern once called it “one of his favorite dishes period”.

One of the best restaurants to try sisig in Manila is Trellis. It’s a simple Filipino restaurant that was one of the first places to introduce sisig to Manila. For me, it’s still the best. 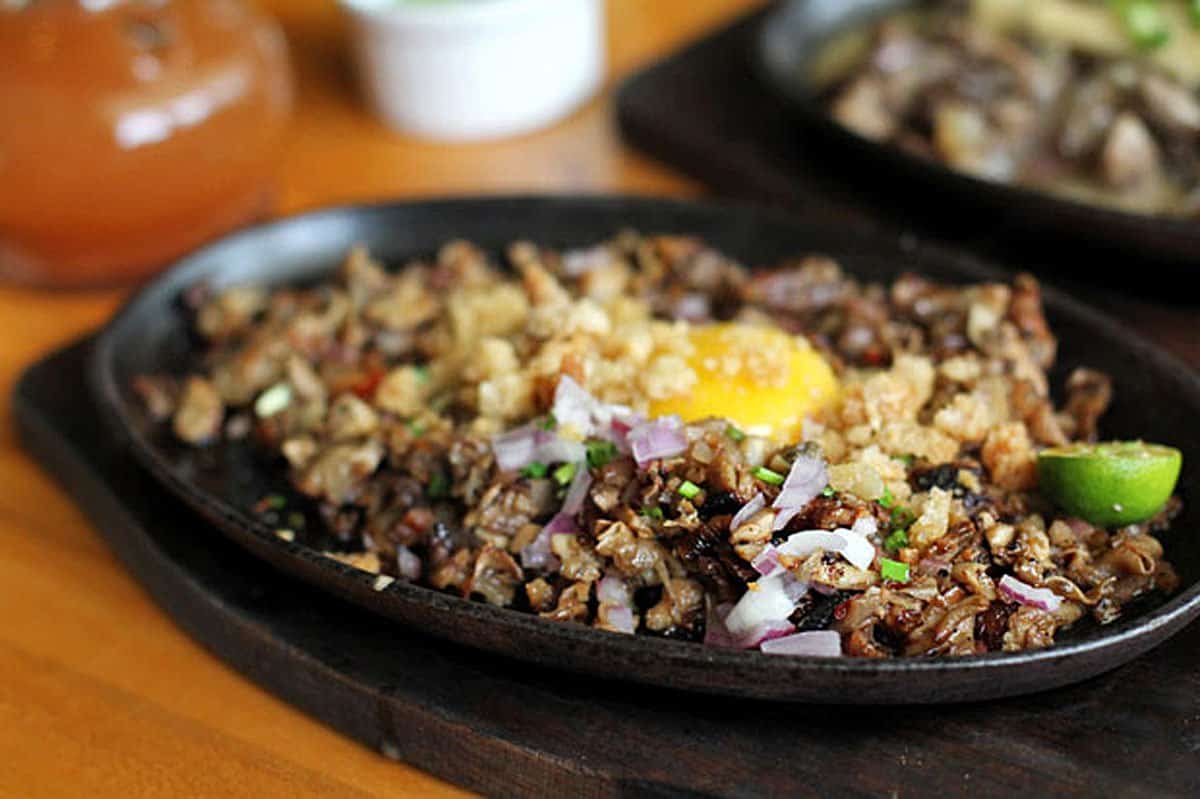 Pancit Bihon Guisado is a Filipino-Chinese dish made with sauteed rice noodles, meat, and vegetables. It’s a staple dish that’s second only to rice. There are several types of pancit, but this is one of the most common and can be found in many Filipino eateries. 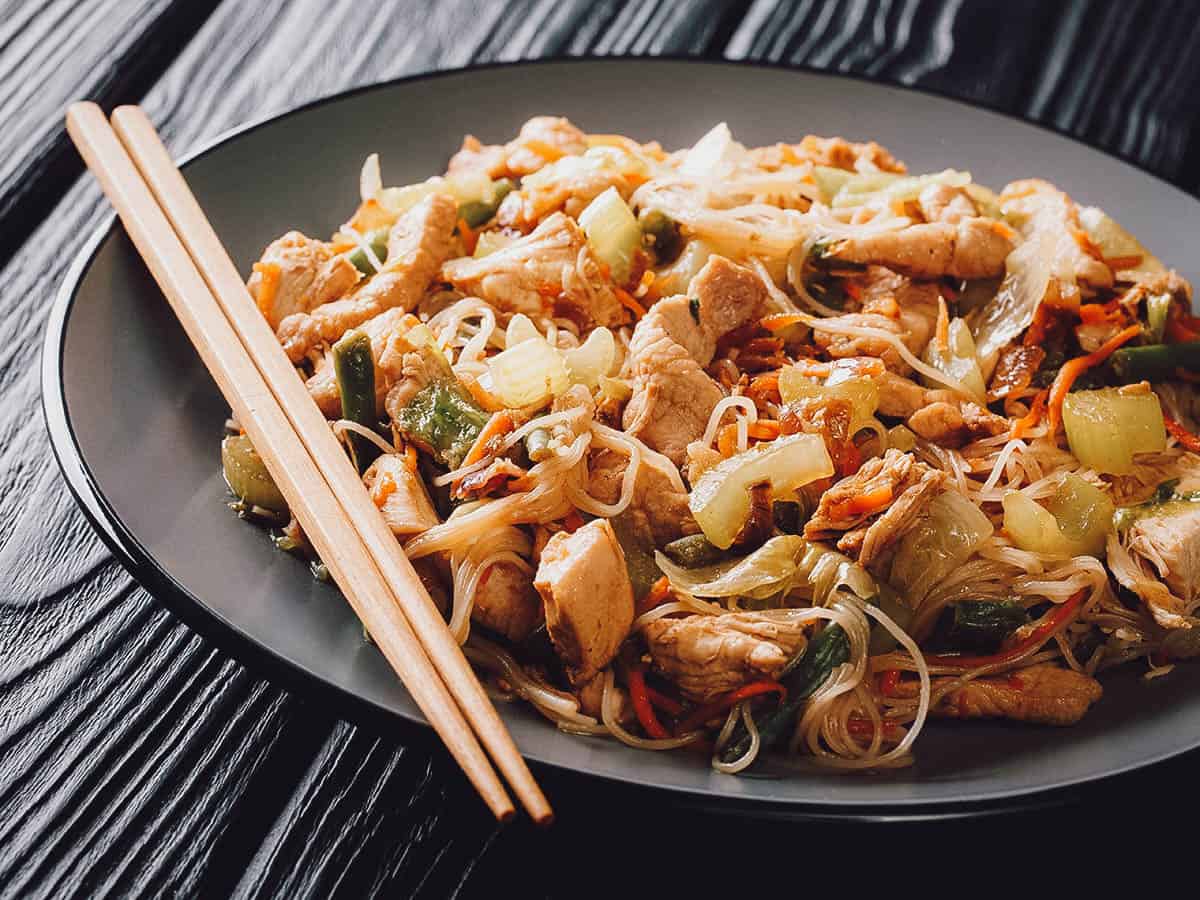 Crispy pata consists of deep-fried pig trotters or knuckles served with a soy-vinegar dip. If you’re a fan of lechon (roast pig), then you’ll love this dish.

You can find crispy pata at many Filipino restaurants but one of the best places to try it is at Livestock. Livestock’s crispy pata is so tender that they use a popsicle stick to cut it up. The meat practically melts in your mouth. 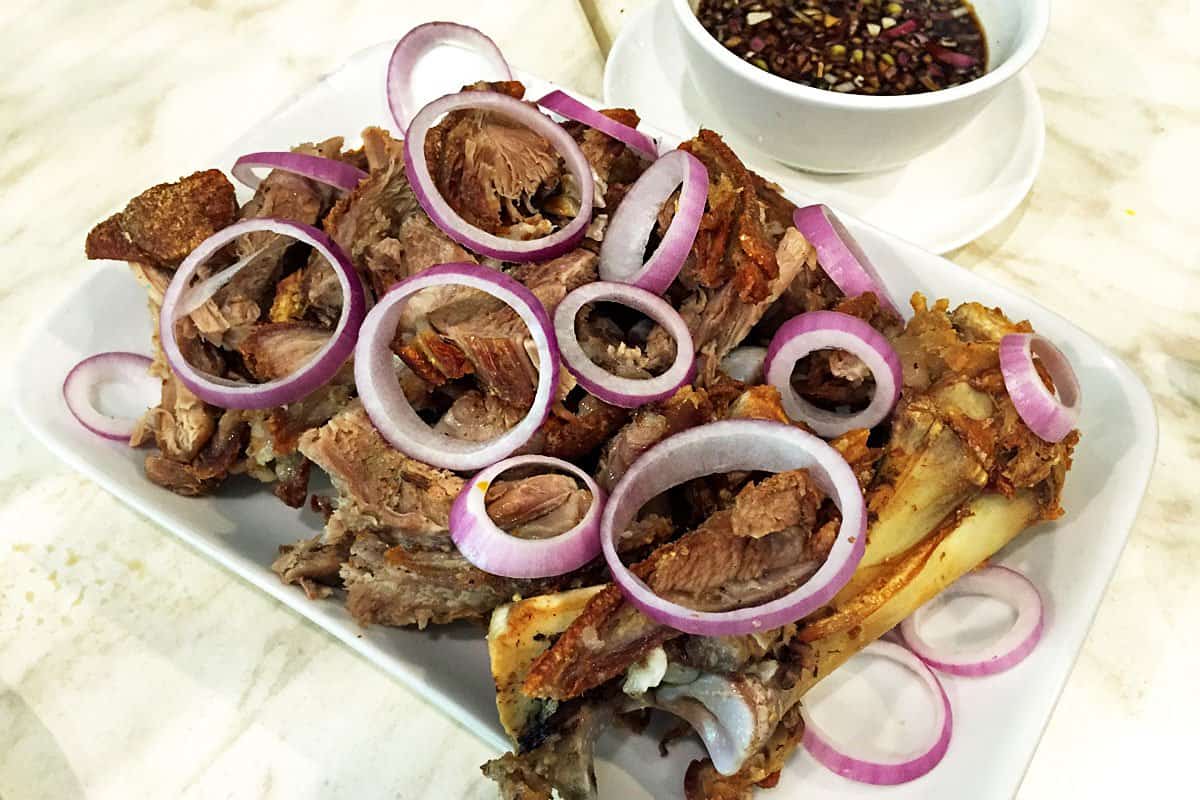 The messentery is the thin, web-like structure that supports the small intestine. When the mesentery is detached, it forms a frill or ruffled-like ornament resembling a flower, hence the name of the dish.

Deep-fried and crisp with a nice chewy texture, Chicharon bulaklak is great dipped in vinegar and washed down with swigs of ice cold beer. Just don’t eat too much of it if you care about the well-being of your heart. 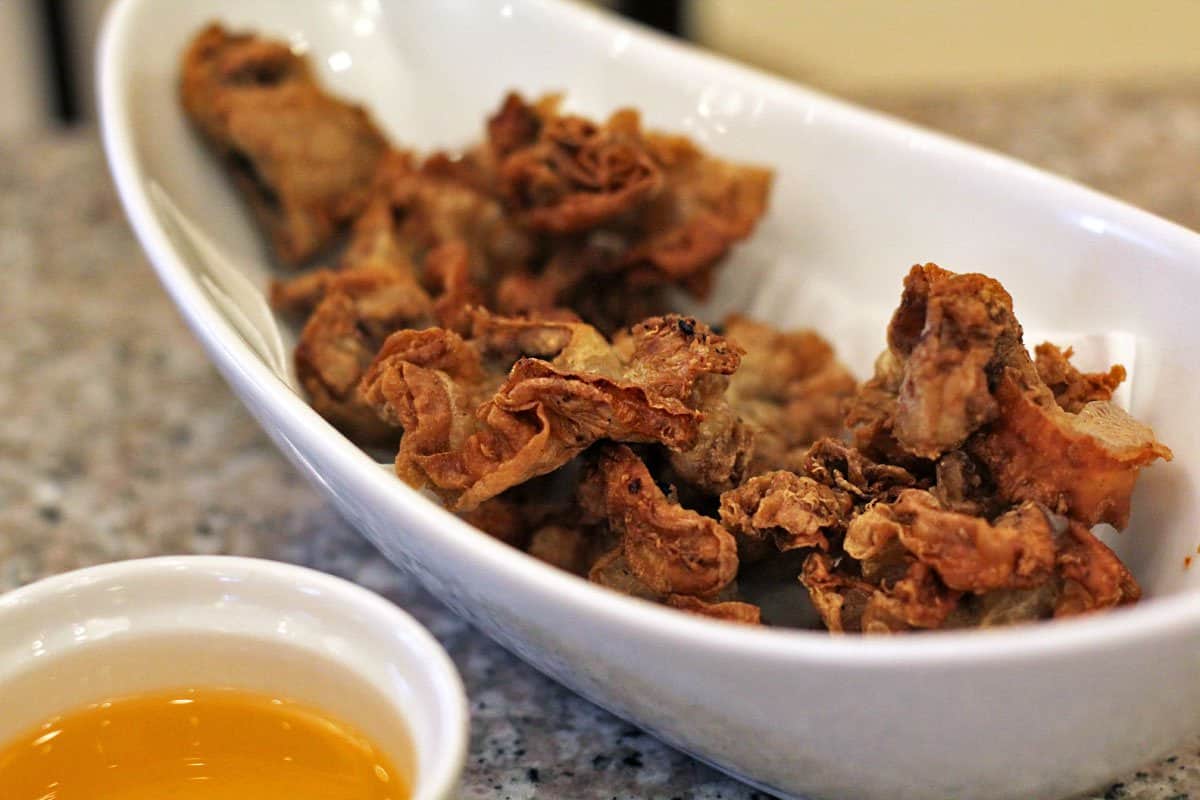 Sinigang is a Filipino soup or stew characterized by its sour and savory flavors. It’s traditionally tamarind-based and can be made with fish, pork, beef, shrimp, or chicken as its protein.

Many Filipinos grew up eating sinigang so it’s a comforting dish for most. It’s similar to Malaysian singgang or Thai tom yum. 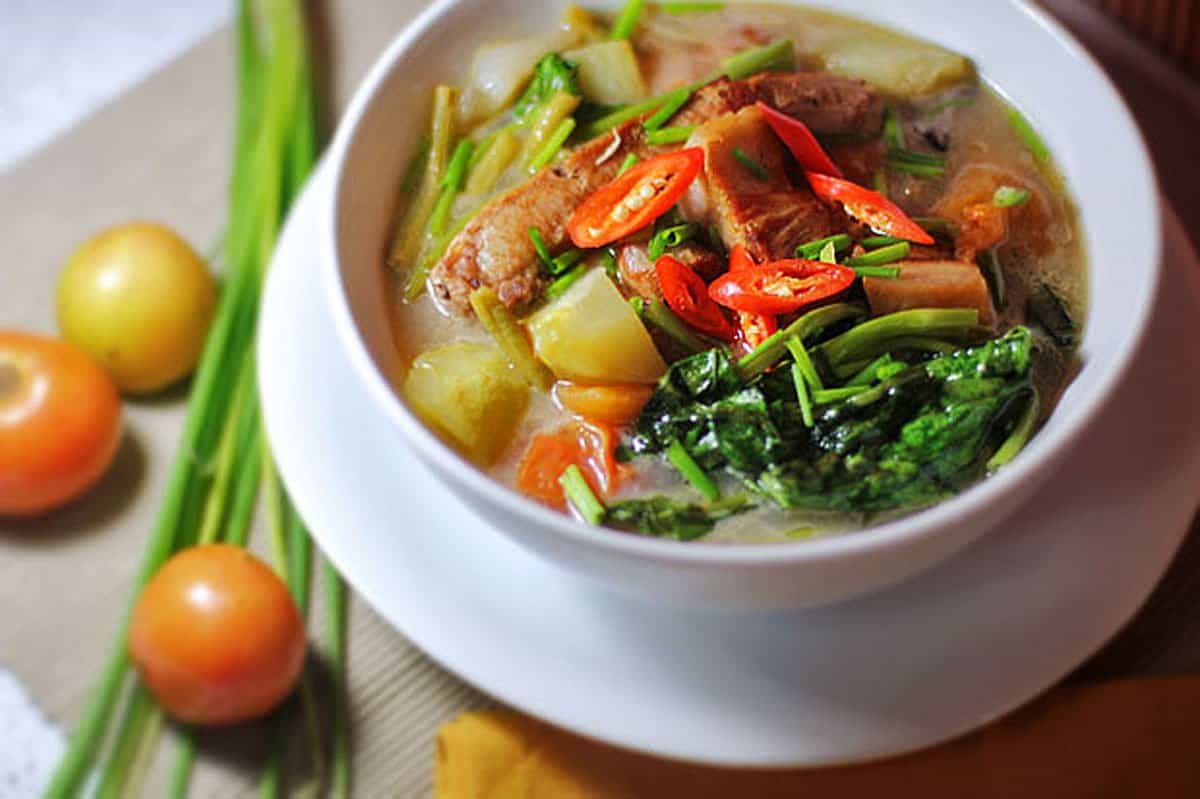 Kare-kare is a Filipino stew commonly made with oxtail, tripe, pork hocks, and vegetables. The stew is flavored with ground roasted peanuts or peanut butter, onions, and garlic before being colored with annatto and thickened with toasted or plain ground rice.

Kare-kare is traditionally cooked and served in a clay pot called a palayok with a side of bagoong or fermented shrimp paste. 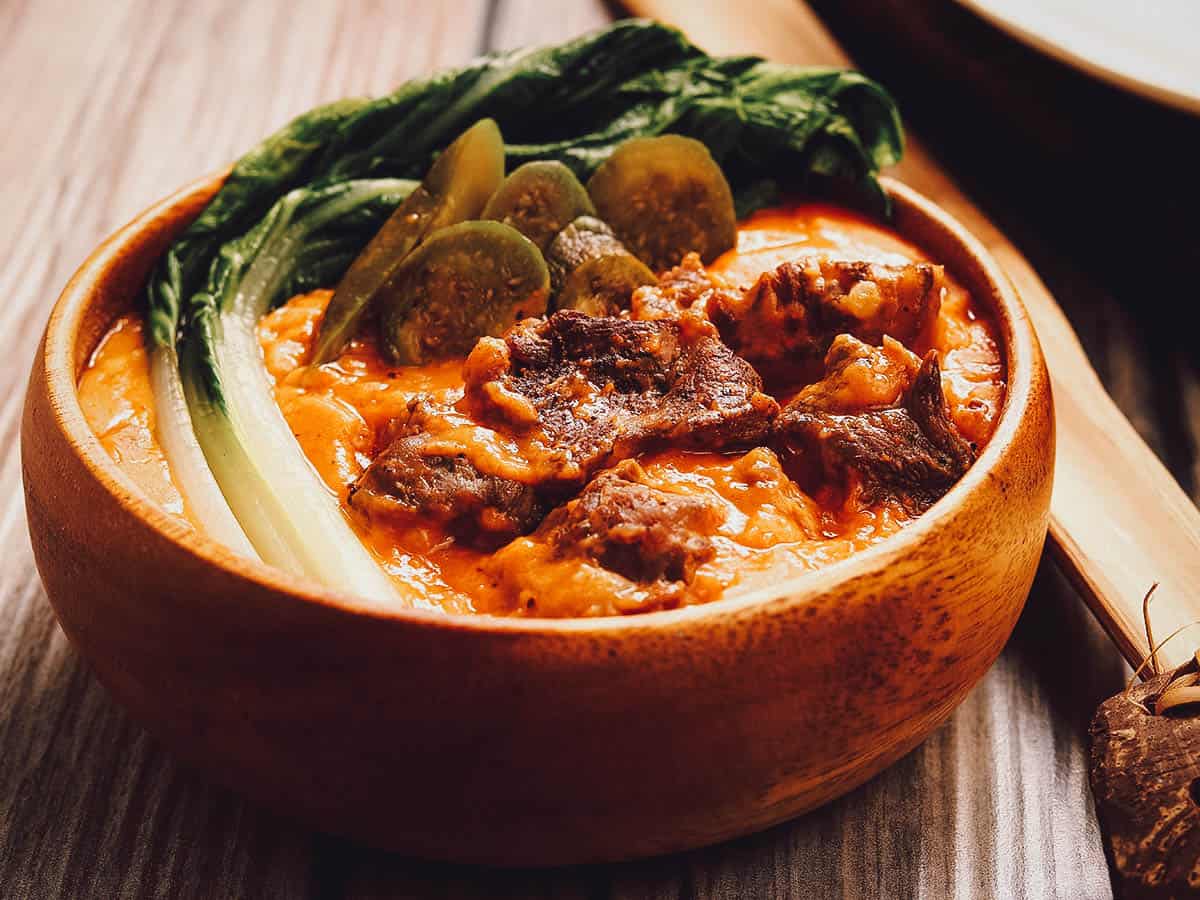 Dinuguan means “to be stewed with blood” and refers to a Filipino savory stew made with pork and/or pork offal — typically lungs, kidneys, intestines, ears, heart, and snout.

It’s simmered in a rich, dark gravy of pig’s blood, garlic, chili, and vinegar and usually served with a side of puto or Filipino rice cakes. 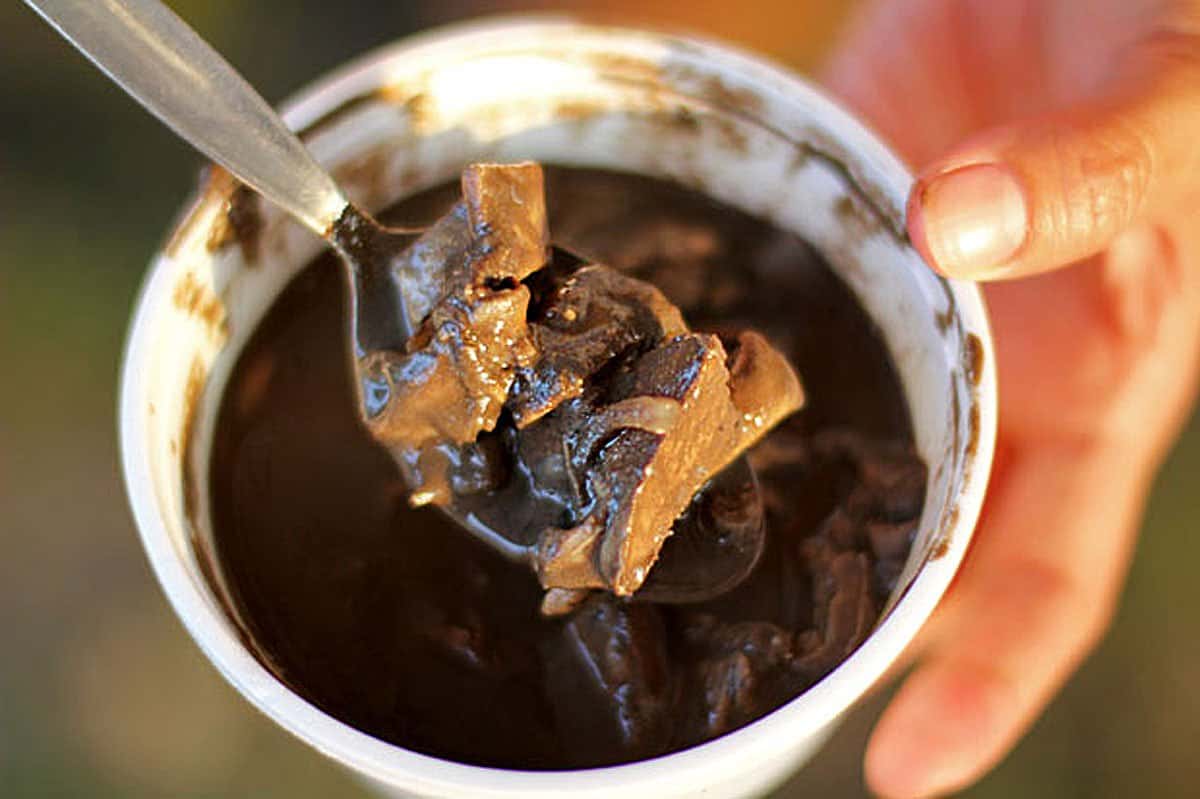 Adobo is arguably the most iconic and well-known dish in Filipino cuisine. Stemming from the Spanish word adobar meaning “to marinate”, adobo is a popular Filipino dish made with chicken or pork marinated in vinegar, soy sauce, black peppercorn, garlic, and bay leaf.

Adobo is so popular that many consider it to be the unofficial national dish of the Philippines. 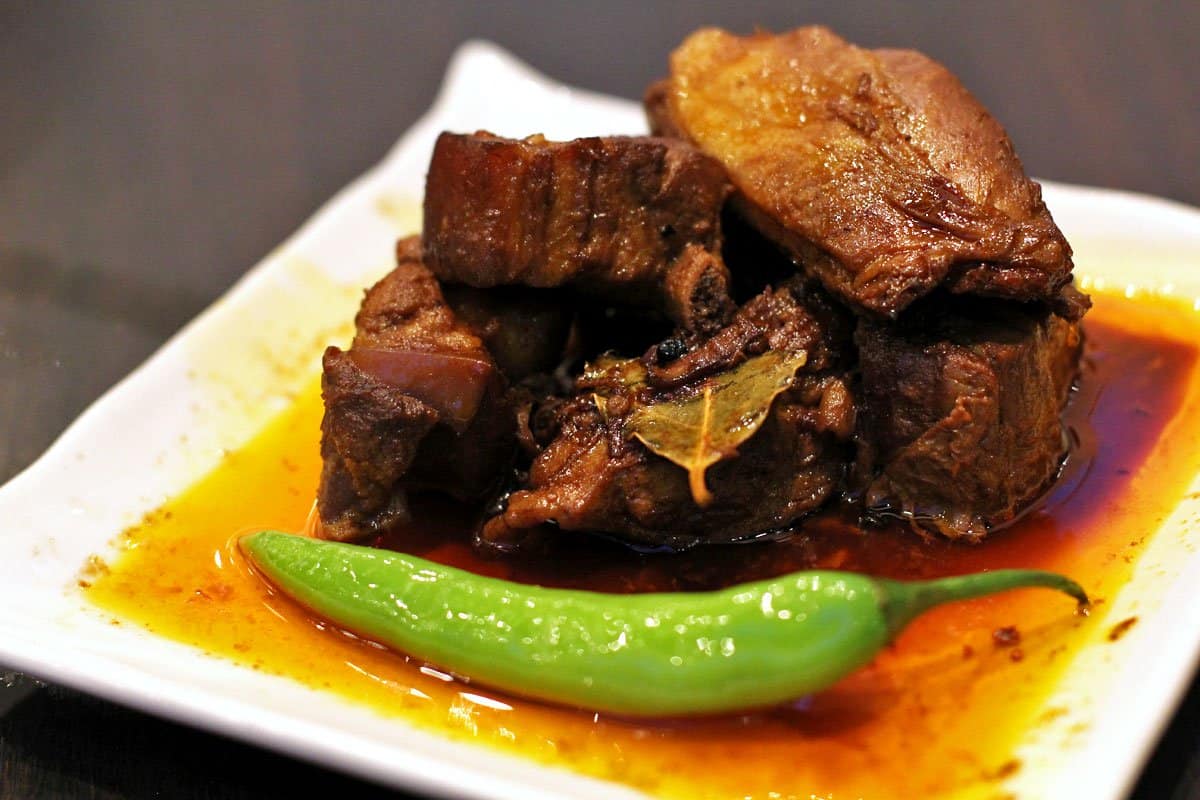 If adobo is the most famous dish in Filipino cuisine, then balut has to be its most infamous. A popular Filipino street food, balut refers to a developing duck embryo that’s boiled and eaten in its shell.

Balut is off-putting even for many Filipinos so I don’t blame you for not wanting to try it. Personally, I think it’s delicious. 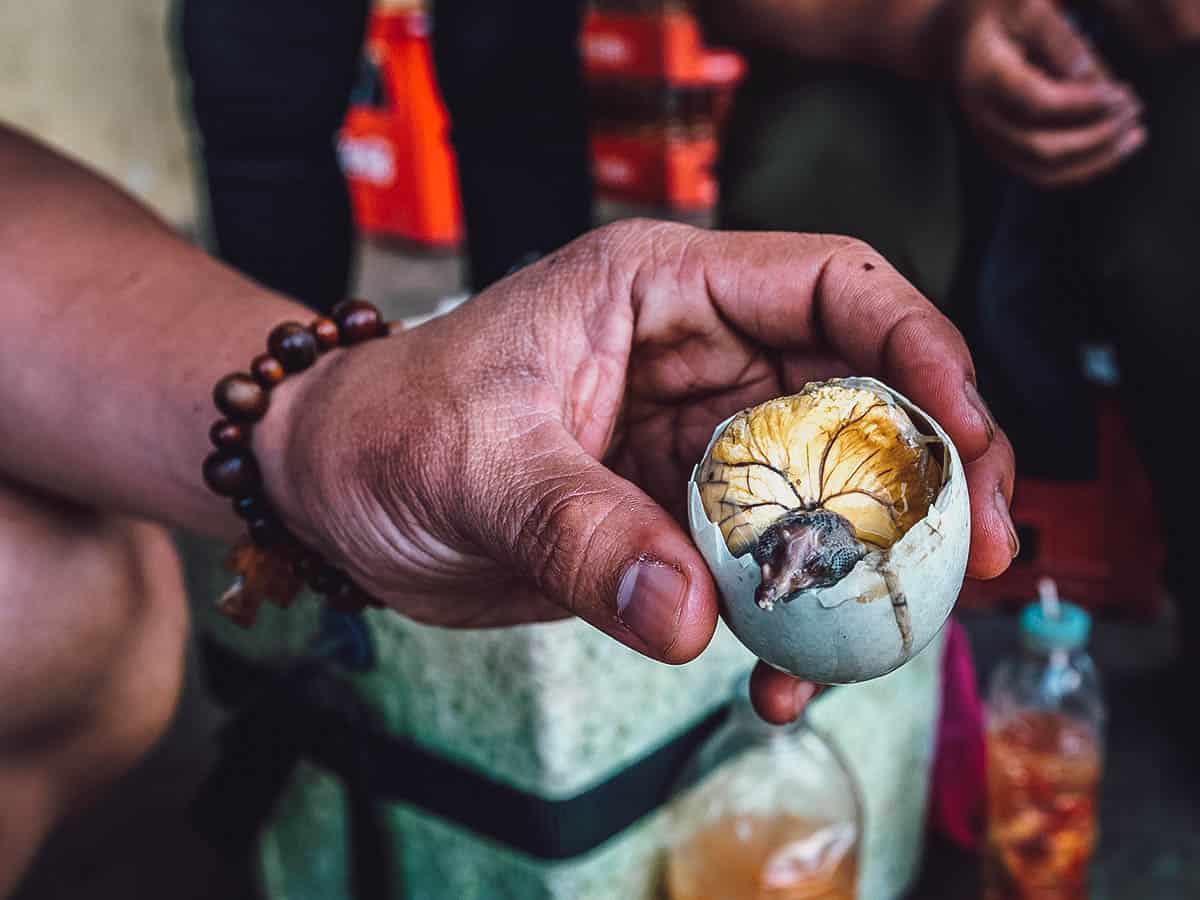 Bibingka is a type of Filipino rice cake traditionally made from galapong (milled glutinous rice), coconut milk, margarine, and sugar.

To prepare, the mixture is poured into a clay pot lined with pre-cut banana leaves. The clay pot is then placed between the layers of a special clay oven that’s lit with charcoals placed below and above the pot for even cooking.

Traditionally, bibingka is a dish that many Filipino families enjoy during the Christmas season. 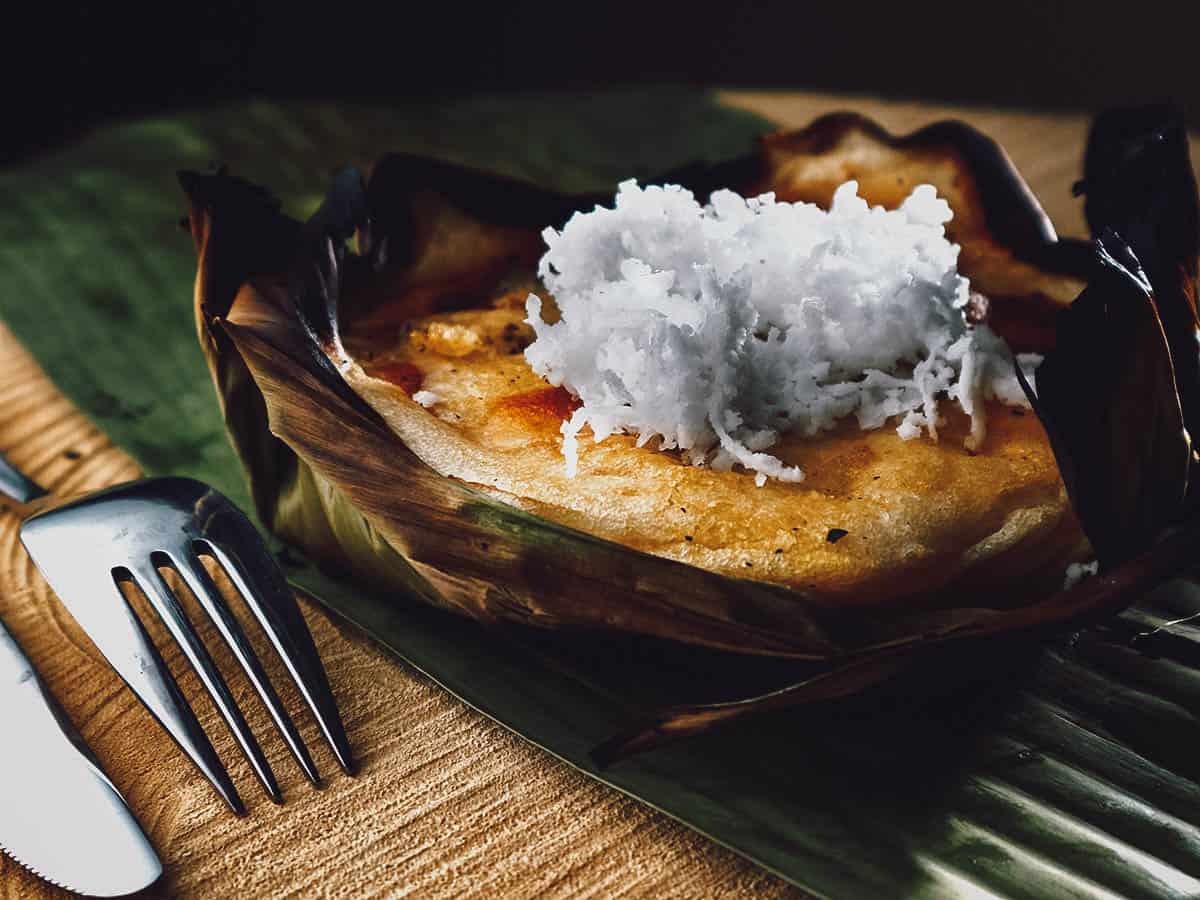 Sans rival is a Filipino dessert cake made with layers of buttercream, meringue, and chopped cashews. A rich, supremely decadent Filipino dessert, its name comes from the French phrase meaning “without rival”. 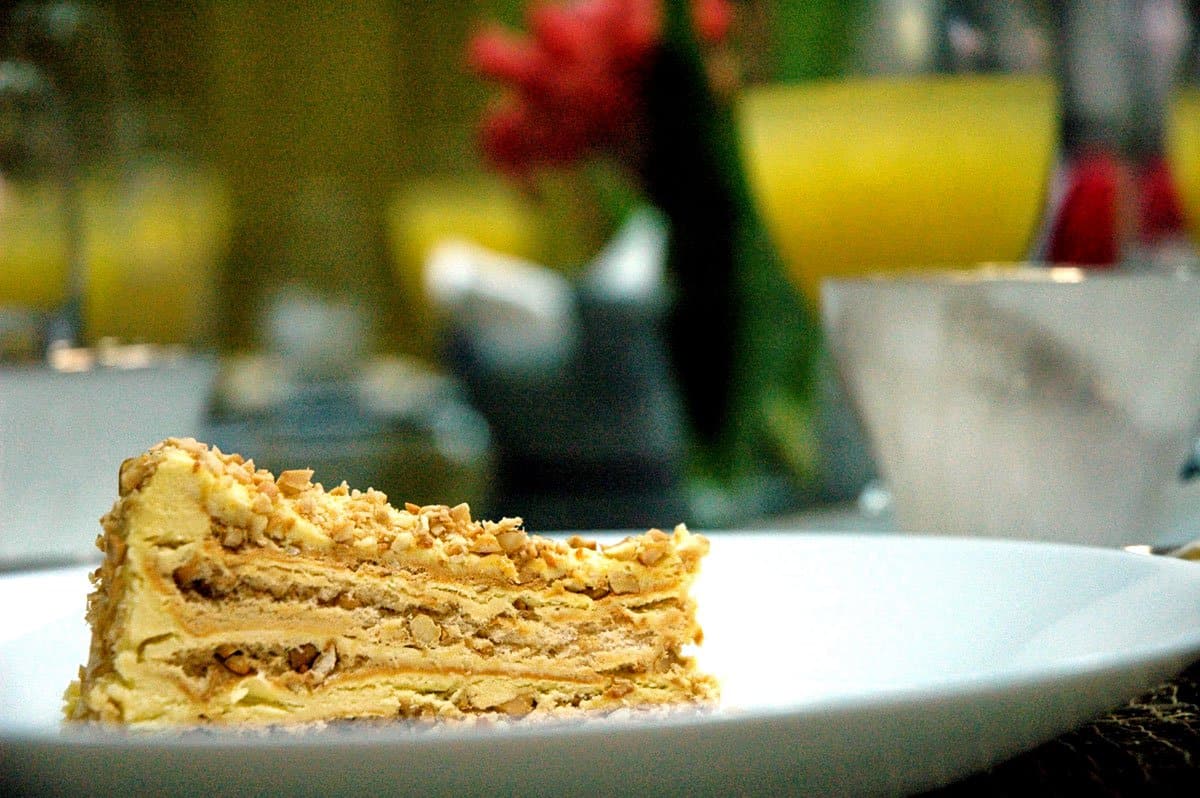 Picture borrowed with permission from the Dude for Food

Halo-halo is arguably the most iconic and well-known Filipino dessert. Meaning “mixed together”, halo-halo is a festive mixture of shaved ice, evaporated milk, and a rainbow of ingredients like boiled kidney beans, garbanzos, kaong (sugar palm fruit), macapuno (young coconut), and plantains sweetened with sugar, among many others.

The ingredients are first placed inside a tall glass, followed by the shaved ice which is then sprinkled over with sugar and topped with either leche flan, ube (purple yam), or ice cream. Evaporated milk is then poured into the mixture before serving. 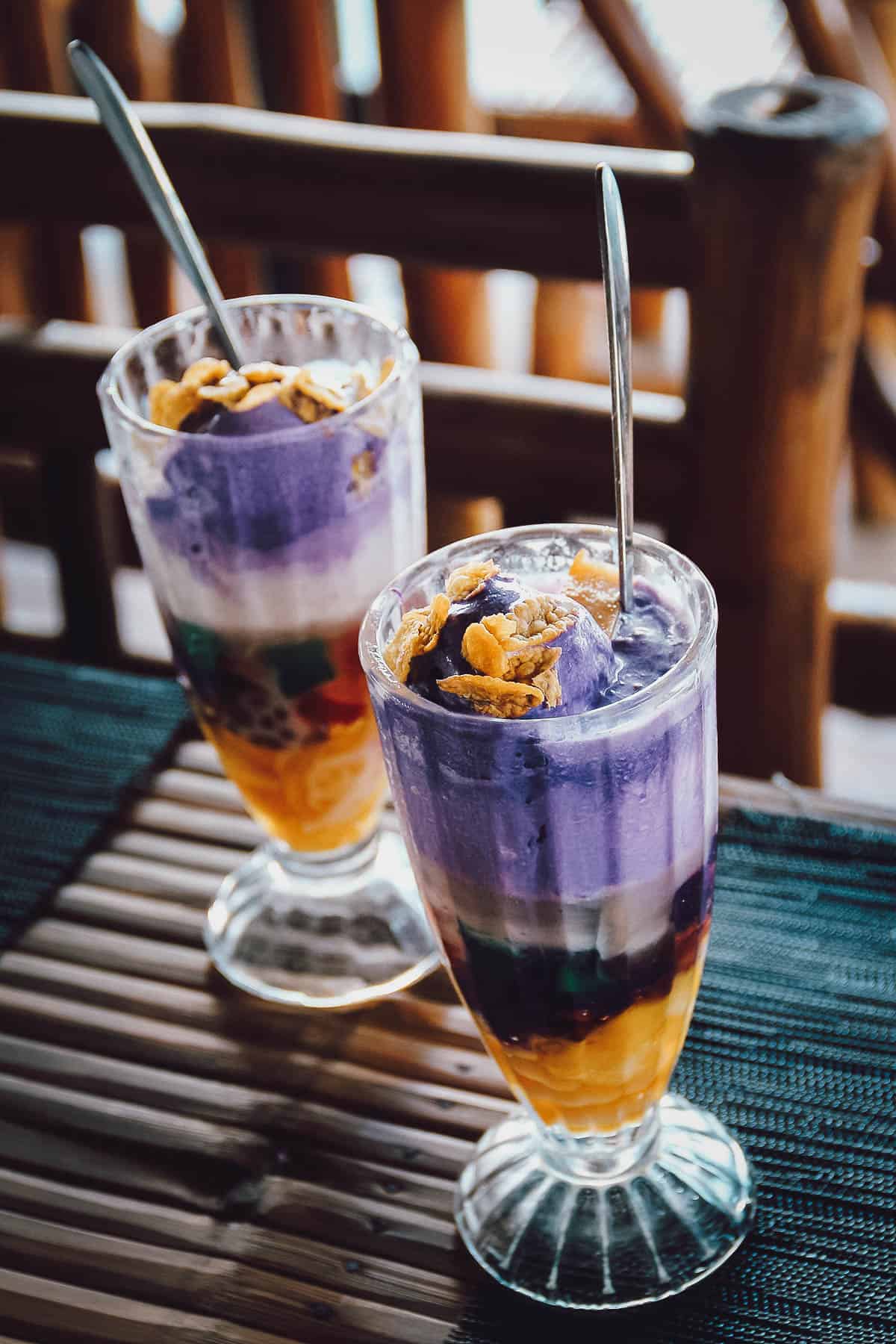 Some Filipinos might balk at this list, questioning why we left off lechon (roast pig) which is one of the most popular and beloved dishes in Filipino cuisine.

I hate to admit it, but neither Ren nor I are fans of lechon. Apart from the skin, we don’t think lechon has much flavor. Filipinos will say that’s what the sarsa (liver sauce) is for but unfortunately, we aren’t fans of sarsa either.

Cebu lechon is the exception so if any foreigners want to try roast pig, then I suggest going for the Cebu variety. It’s very flavorful in comparsion and doesn’t need any sarsa. This is the regional variety of lechon that Anthony Bourdain once hailed as the “best pig ever”.

In any case, have you tried Filipino food? Did you like it? What are your favorite dishes in Filipino cuisine? Let us know in the comments below!

Some of the links in this guide are affiliate links, meaning we’ll get a small commission if we make a sale at no added expense to you. We only recommend products and services that we use ourselves and firmly believe in. We really appreciate your support as this helps us make more of these free travel guides. Thank you!

132shares
Z Hostel: Where to Stay in Manila, the Philippines
← Previous
Take your Pick at Hole in the Wall, an Uber Trendy Food Hall in Makati
Next →
Click here to cancel reply.

This article gives detail about 14 delicious things to eat in the Philippines from a local and this article shared so much information regarding the same… I enjoyed reading while going through this article and this is the best link for gaining all the information about it.

Thanks a lot such an informative submission regarding local foods of Filipino.

Wow yummy food to taste just by seeing the picture I am feeling like carving! Actually I like to have spicy food the one I like most is Chicken Inasal all times favorite. Thanks for sharing some of other food will try for next time.

Crispy Pasta is something which I can’t resist myself to taste. I always look for the new food items, as a foody it’s in blood. However, great article written.

Crispy pata isn't the healthiest but it's delicious James! :)