The Poblacion area is trendy. It’s becoming increasingly popular as a food and arts hub in Makati. Cultured but unpolished, hip but a little seedy, it reminds me of what Malate in Manila used to be.

With all the interesting restaurants popping up in the neighborhood, Poblacion has recently been the subject of local lifestyle shows and blog posts. Going on what’s called a “Poblacion food crawl”, people would visit the area and go to as many restaurants or bars as they could in one night. That’s exactly what we set out to do when we stayed two nights at La Casita Mercedes. We wanted to come up with as much material for this post as possible, so we stayed an entire weekend in Poblacion to explore as many restaurants as we could.

To help us decide which places to include, Ren hopped on Zomato and listed down all the restaurants in the Poblacion area with at least a 4.0 rating. In our experience, people on Zomato are the stingiest when it comes to ratings, so we figured it was a good way of narrowing down the field. Here’s what we ended up with. 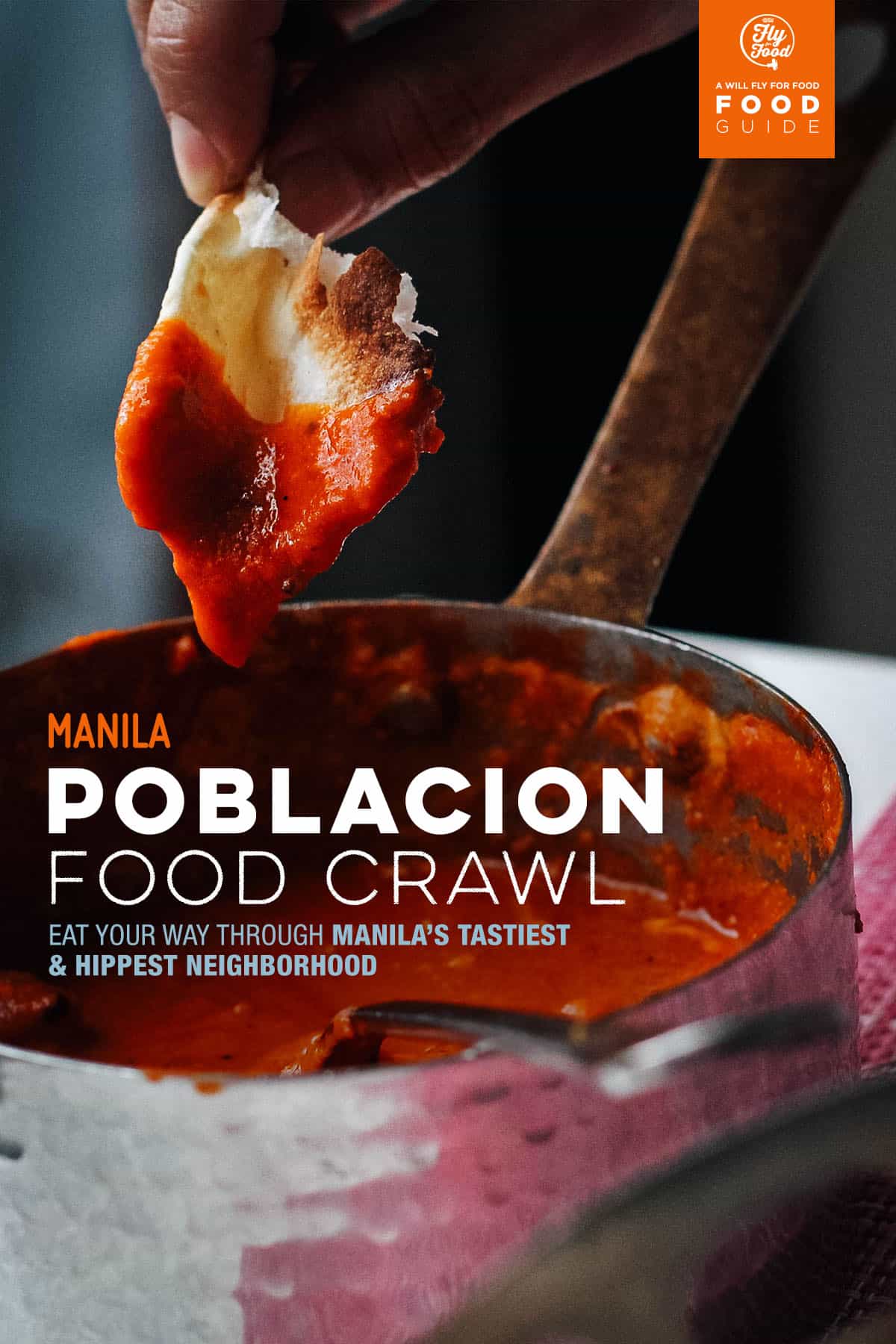 According to Wikipedia, Poblacion is the old downtown area of Makati and its second most important commercial center, after the Central Business District. Home to City Hall, it’s the first settlement in Makati and has long served as the city’s center of local government.

As described in our Manila Travel Guide, we think the Poblacion area is the best place to stay in Manila. It’s centrally located, it’s (relatively) safe, and there are plenty of interesting restaurants to choose from. If you travel for food like we do, then going on a Poblacion food crawl is a must. There are plenty of restaurants here to choose from, but according to the Democratic Republic of Zomato, these are the places you should check out.

Please note that we went on the food crawl in July 2017. At the time, all the places we went to had a Zomato rating of at least 4.0. Some have dipped below that since then, but we included them anyway (for now).

A few people have come up with these Poblacion Food Crawl lists and it always amazes me how different they are from one another. Considering Poblacion isn’t that big of an area, it’s surprisingly uncommon to find the same place on two people’s lists. One notable exception however, is El Cupacabra. This Tex-Mex taco restaurant is on nearly everyone’s list. As far as I know, it’s a pioneer in the Poblacion food scene and remains one of the most popular and cheapest places to get a drink in the neighborhood. 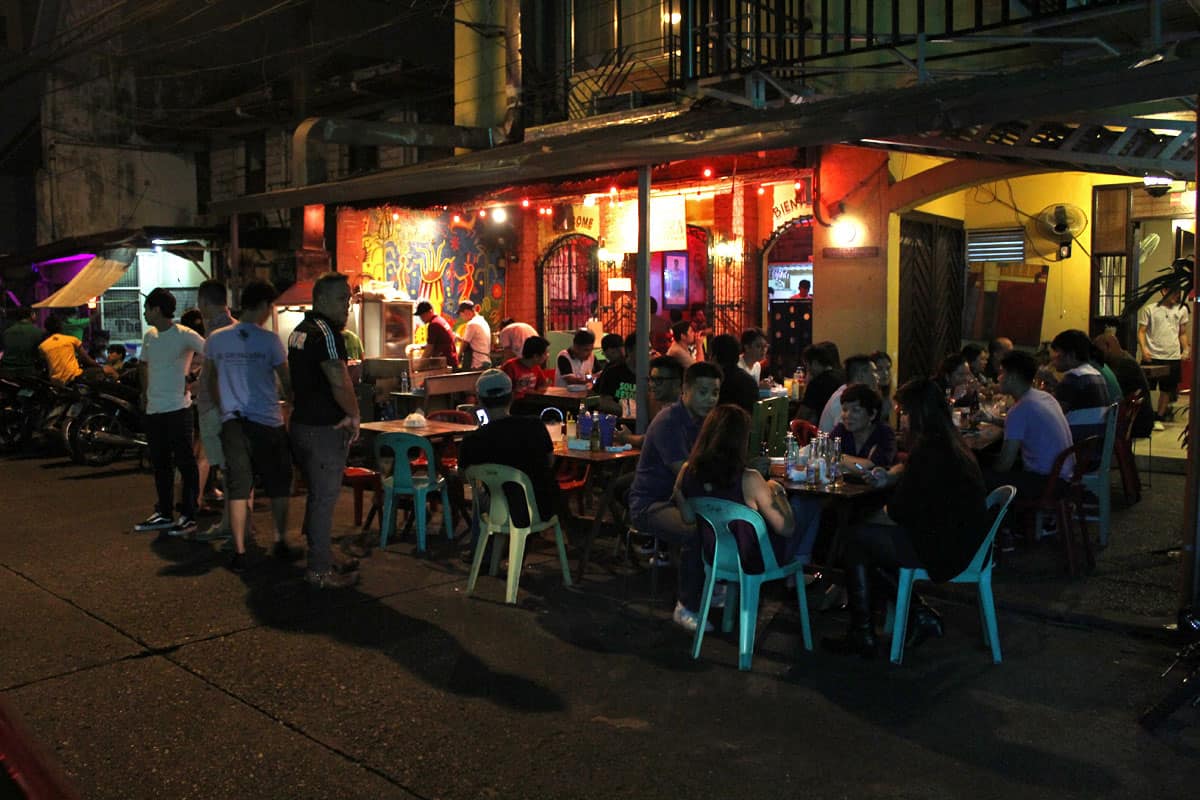 They offer many Mexican-American dishes here like burritos, tacos, and enchiladas. They even give you the option of having their burritos “Mission-style” with Mexican rice, or “San Diego-style” with french fries. Today, we had these delicious street tacos which range in price from PHP 110-170 each. 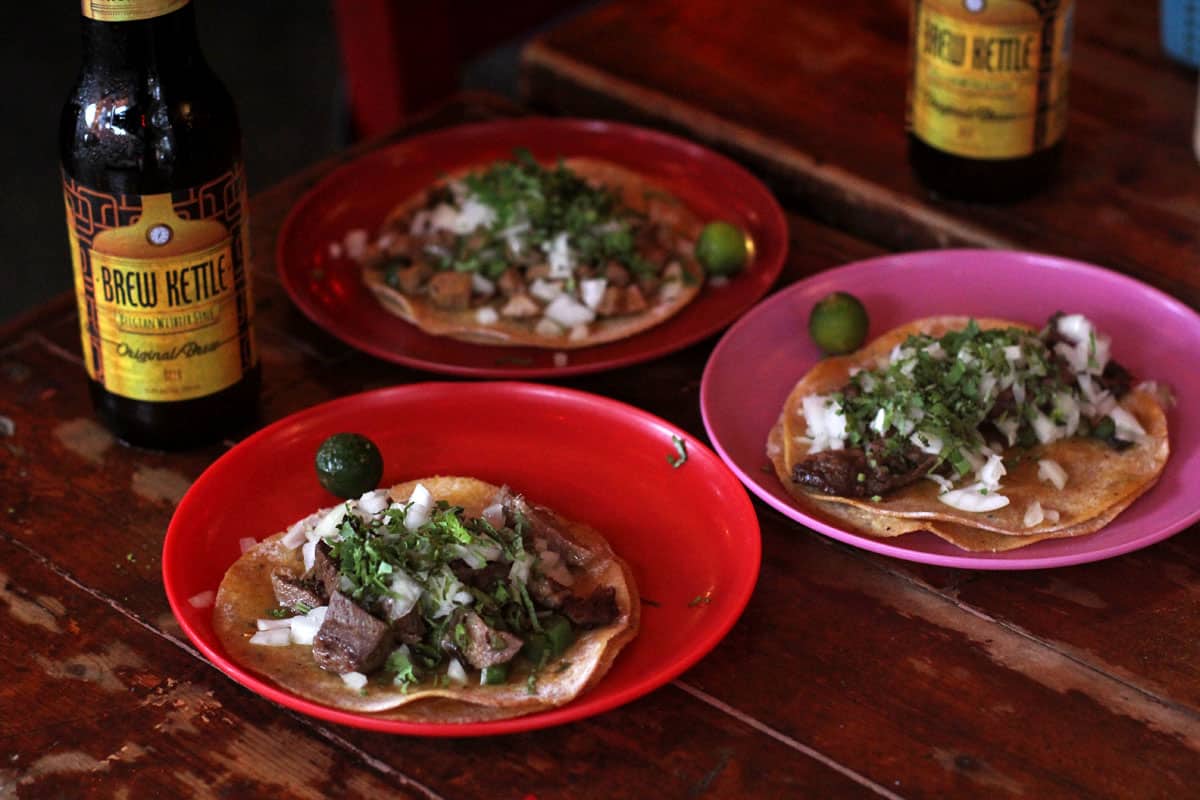 Crying Tiger offers Thai dishes and some of the cheapest local beers in Poblacion. 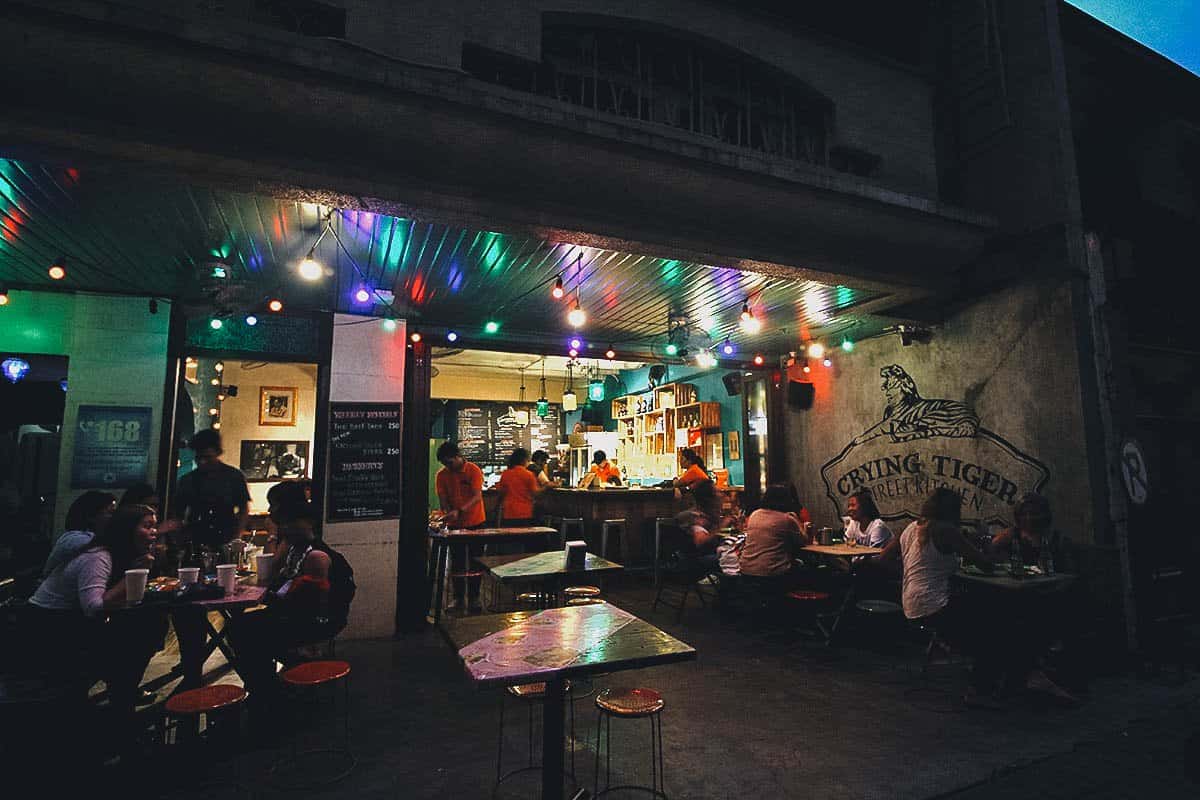 They offer many main dishes but we were here to drink so we stuck with their bar menu. These sticks of moo ping or Thai pork bbq can be had for PHP 35 apiece. They were really good. 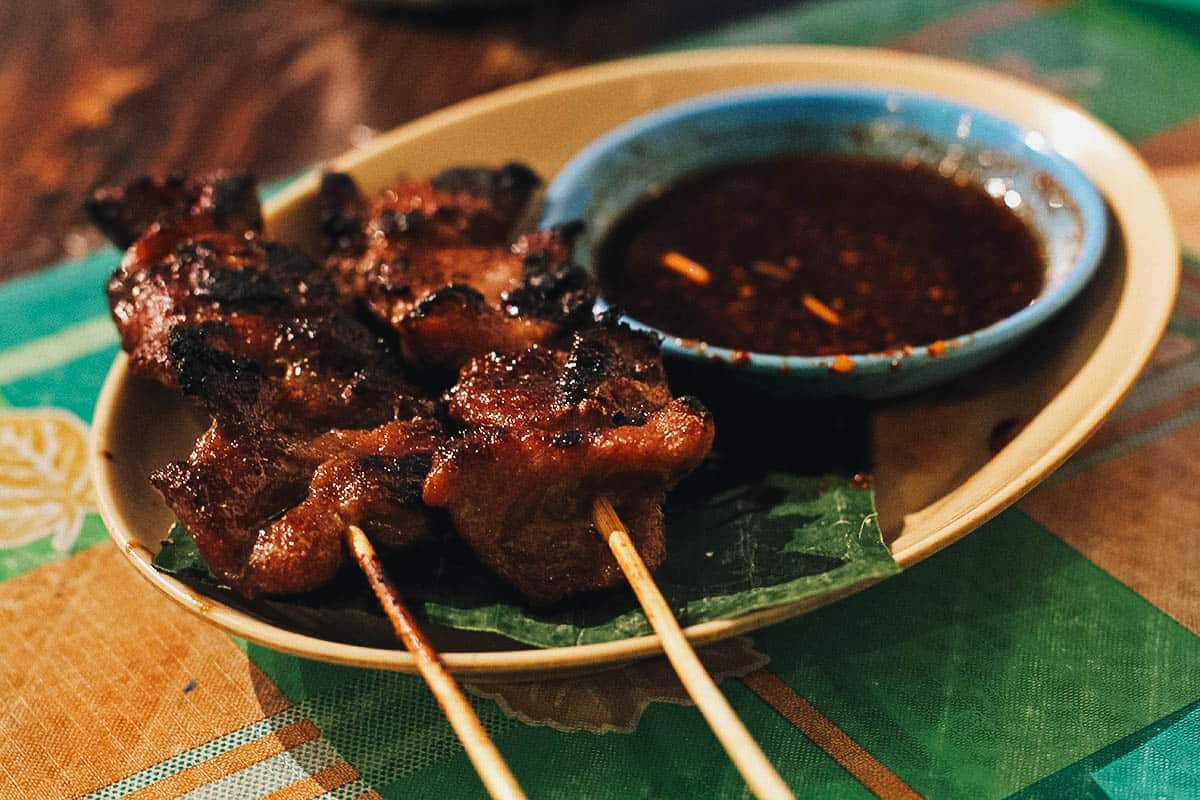 Aren’t these cute? These are fried quail eggs or khai nuk kra ta (PHP 90). They’re fun to eat and a great accompaniment to beer. 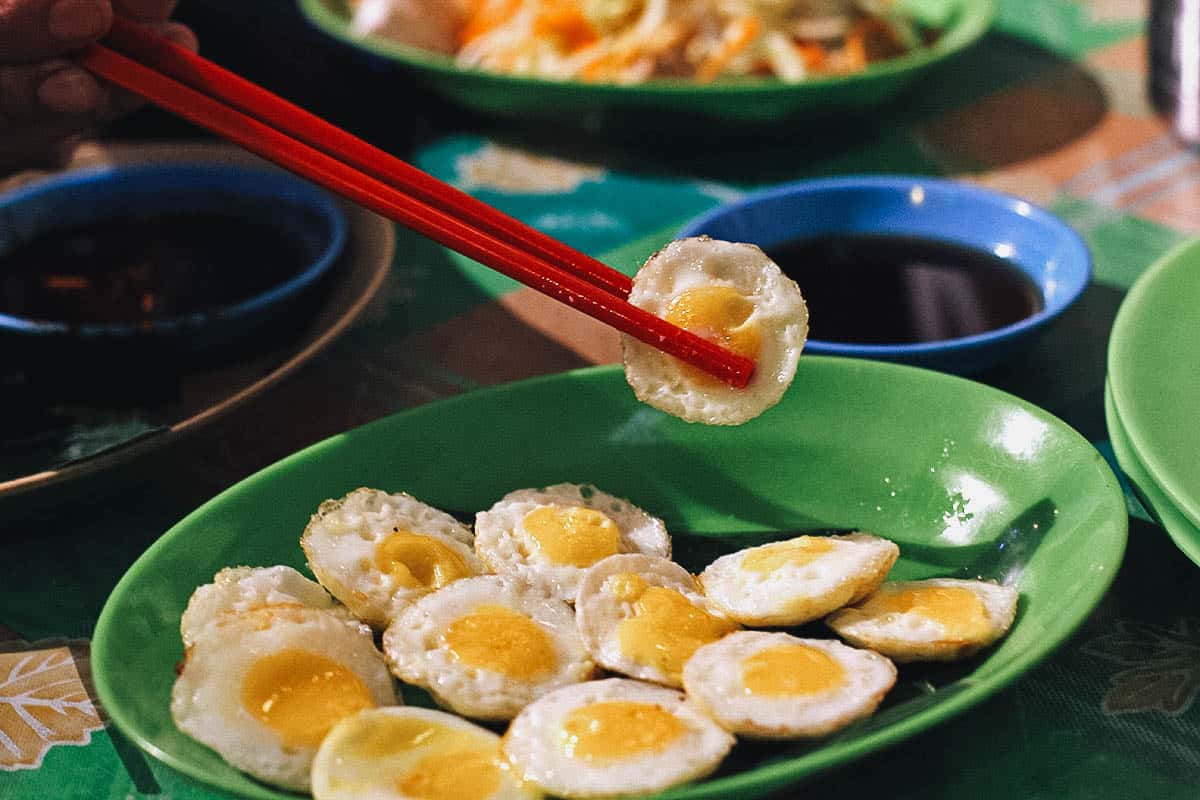 This was one of the aforementioned restaurants that had at least a 4.0 rating in July 2017 but has dipped since then. They offer Latin American cuisine like Peruvian chicken, mofongo, and Cuban sandwiches. 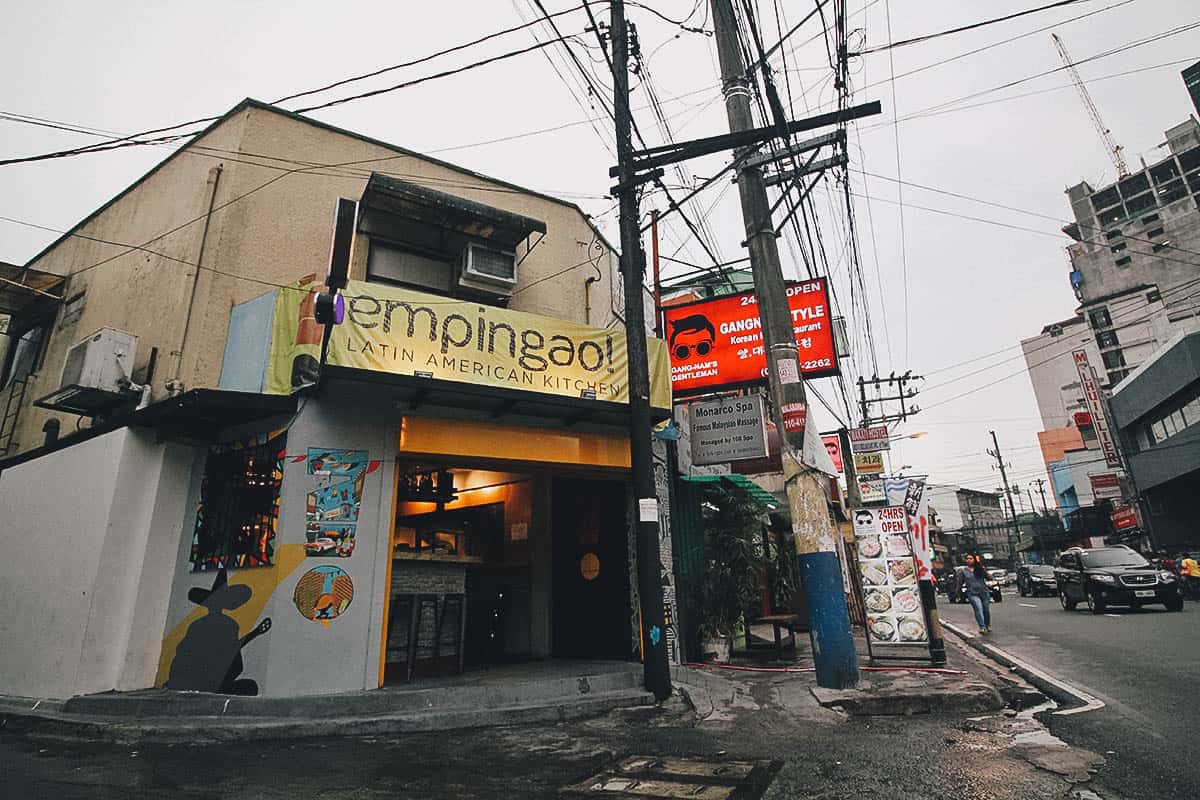 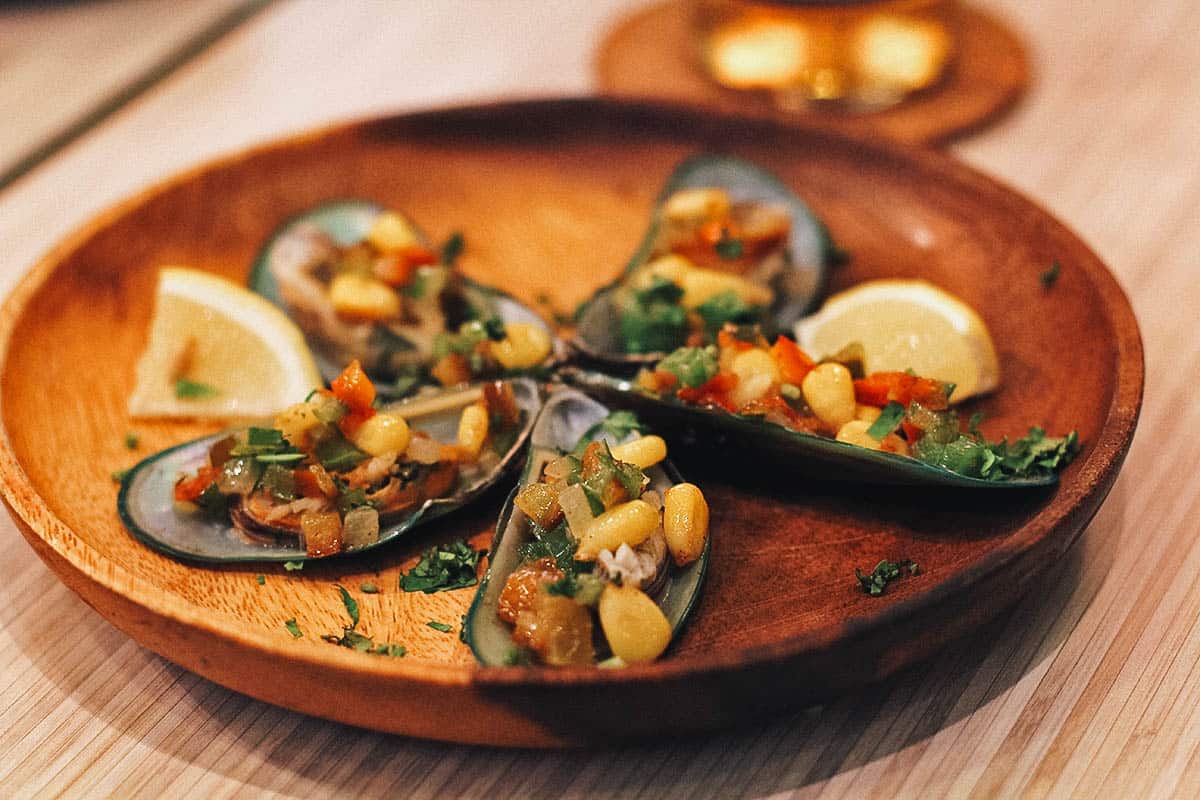 Pollo ala brasa (PHP 210) or Peruvian chicken with chimichurri 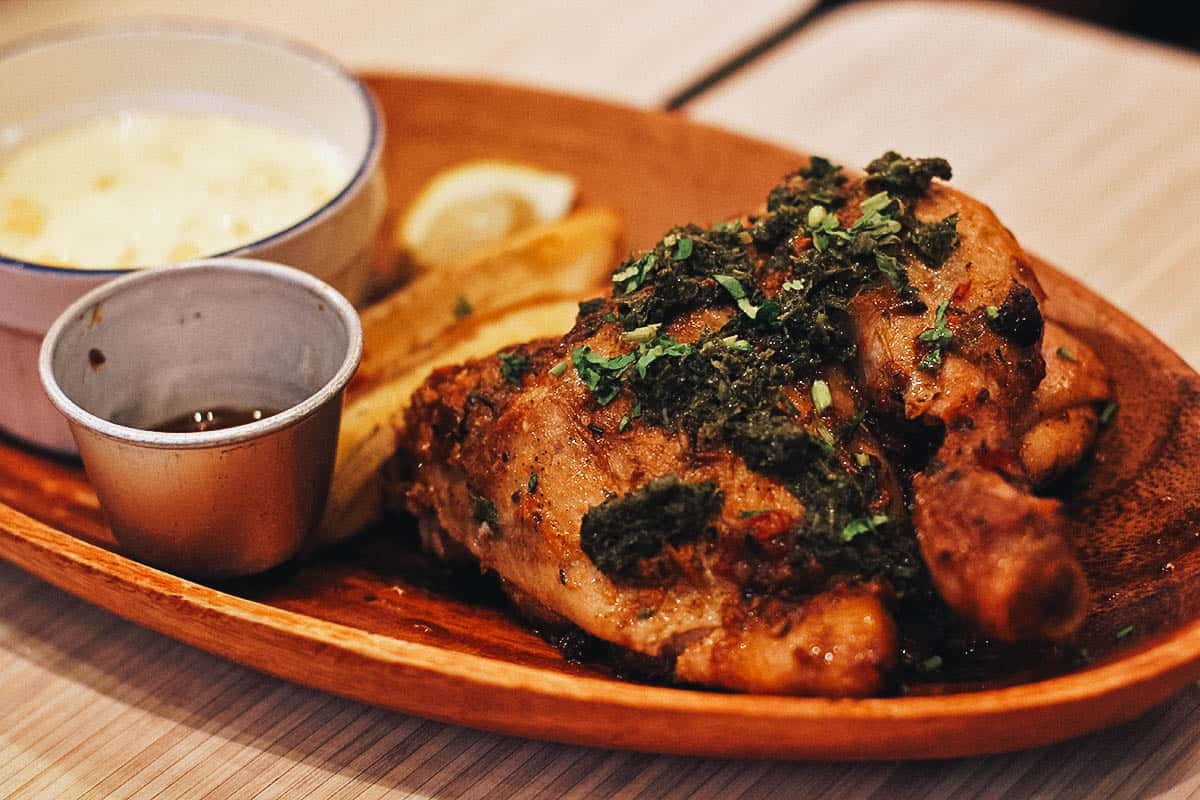 Hole in the Wall – CLOSED

Hole in the Wall is a food hall in Century City Mall. Think of it as an upscale shopping mall food court. There you’ll find many stalls serving different types of cuisine. I wrote a post about Hole in the Wall a couple of years ago. Some of the stalls in that post have since closed but the best places are still open. 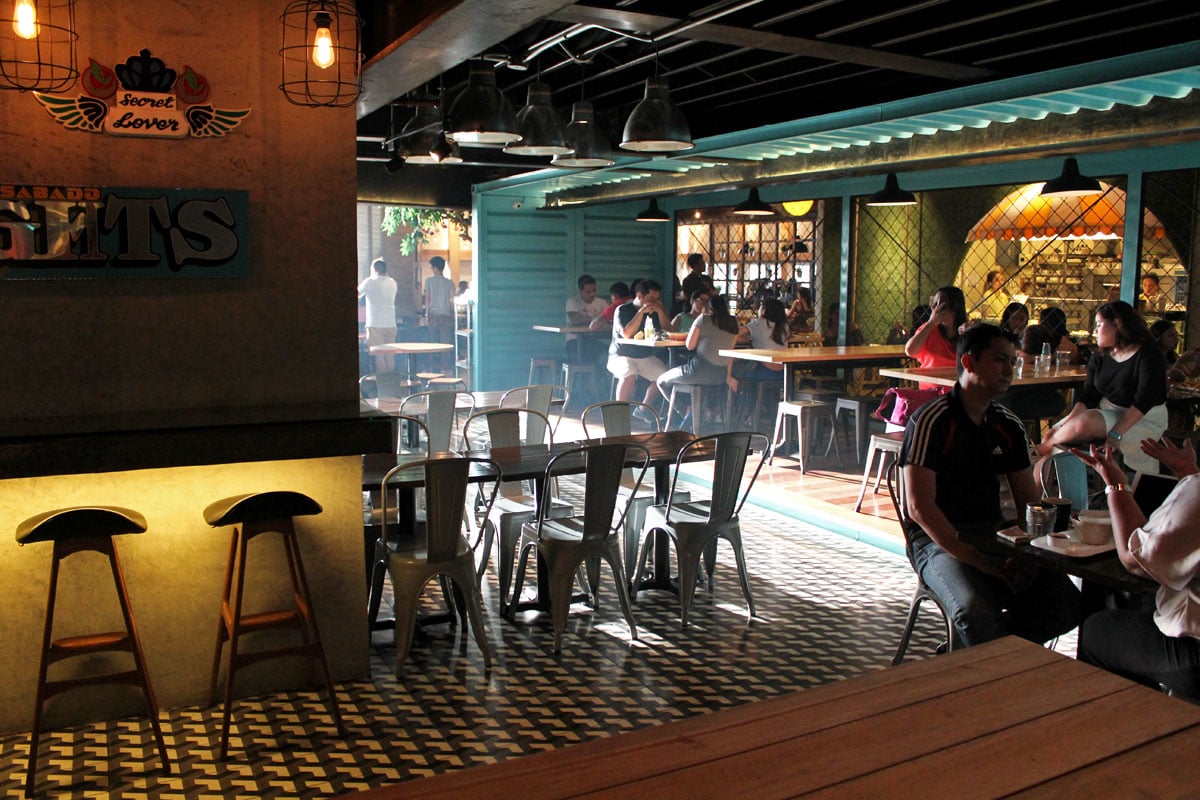 Liberation Shawarma has been here since the start and they have a decent Zomato rating of 3.5 (as of Oct 2017). We had heard about their fried chickpeas so we went and tried them today. 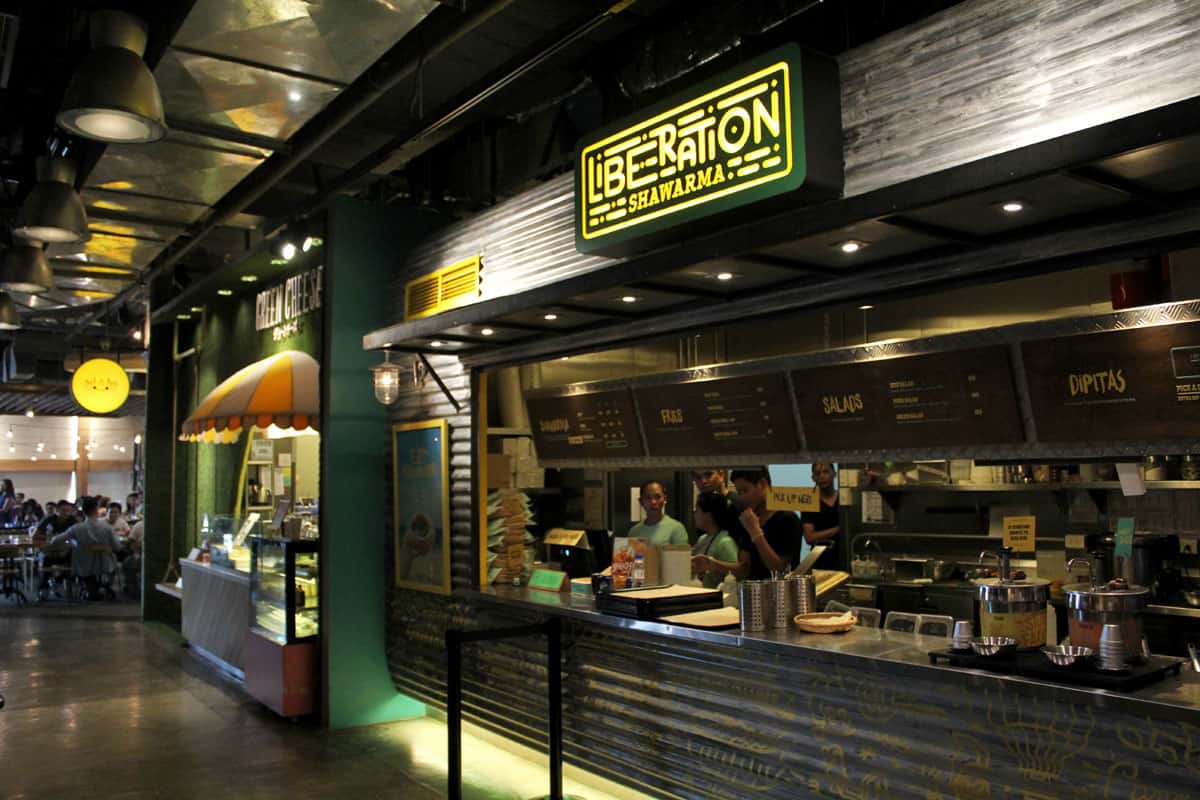 These fried chickpeas (PHP 72) are addictive and great with beer. 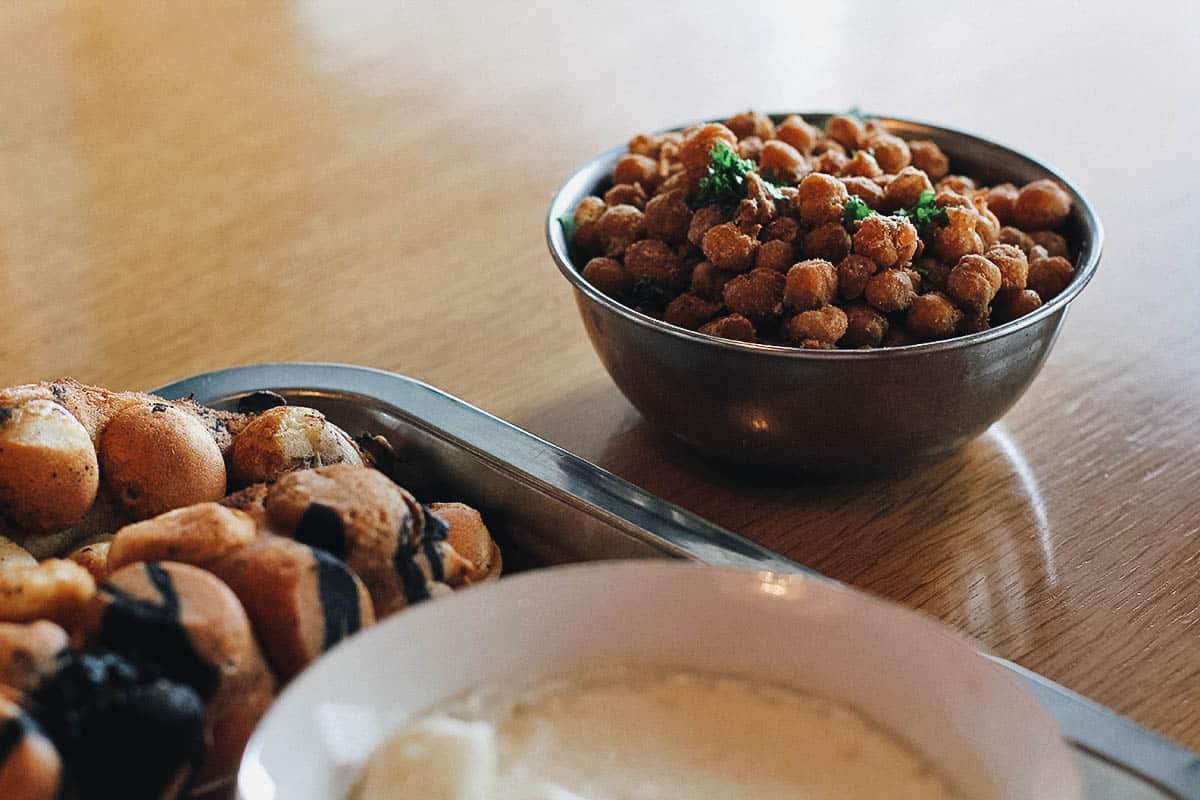 It was nice to see Bad Bird still going strong. Known for their umami fried chicken and waffles, they’ve managed to maintain an impressive 4.3 rating on Zomato (as of Oct 2017). 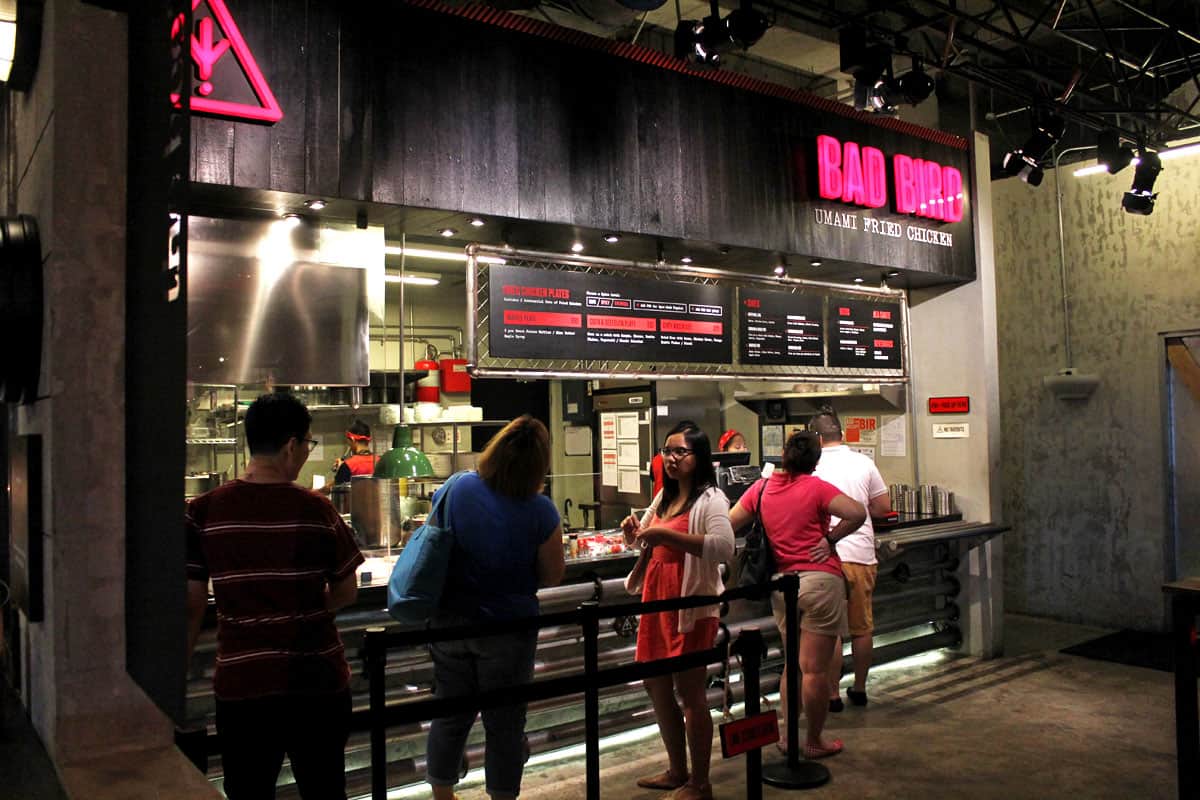 The muy delicioso waffle plate (PHP 350) consisting of two pieces each of their famed umami fried chicken and sweet potato waffles served with miso butter and maple syrup. If I understand correctly, Bad Bird is a Korean-Japanese fried chicken and waffles concept. 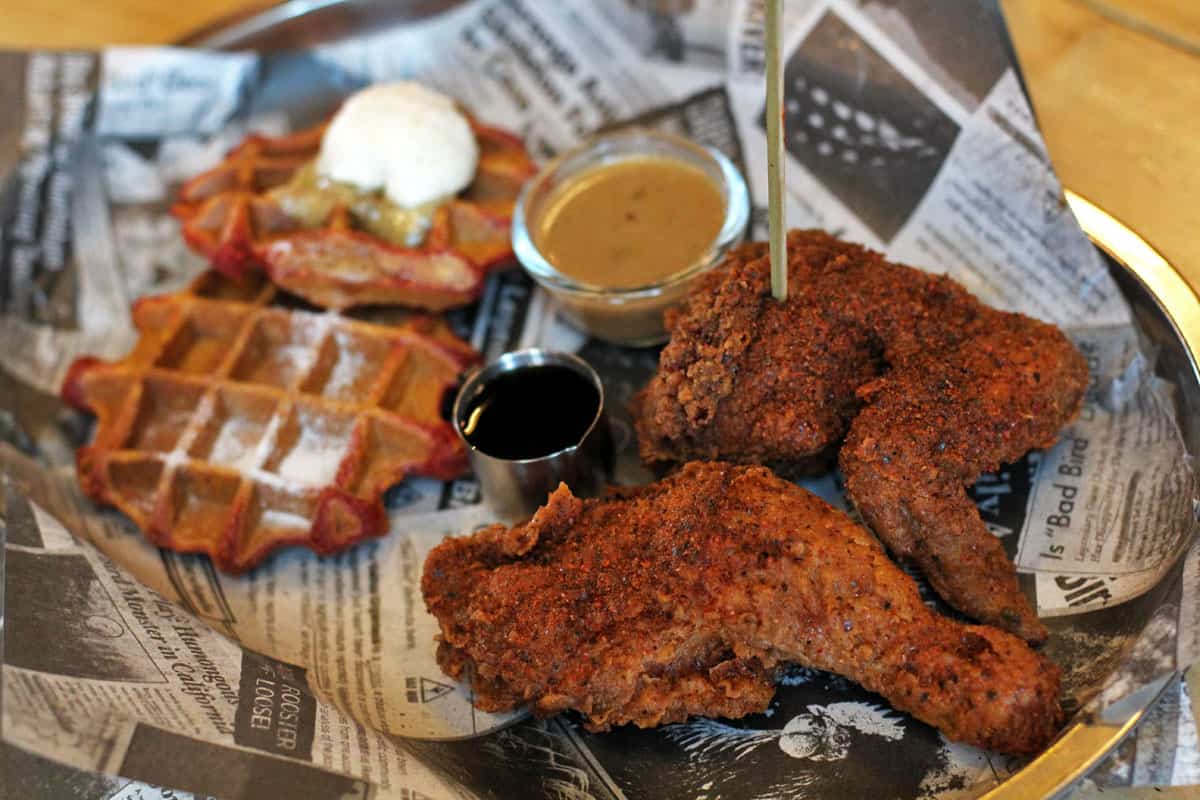 Milk Trade is a newer addition to Hole in the Wall. They offer Chinese steamed milk desserts and eggettes, and have an impressive Zomato rating of 4.0 (as of Oct 2017). We had this eggette with steamed milk set for PHP 150. It was delicious. 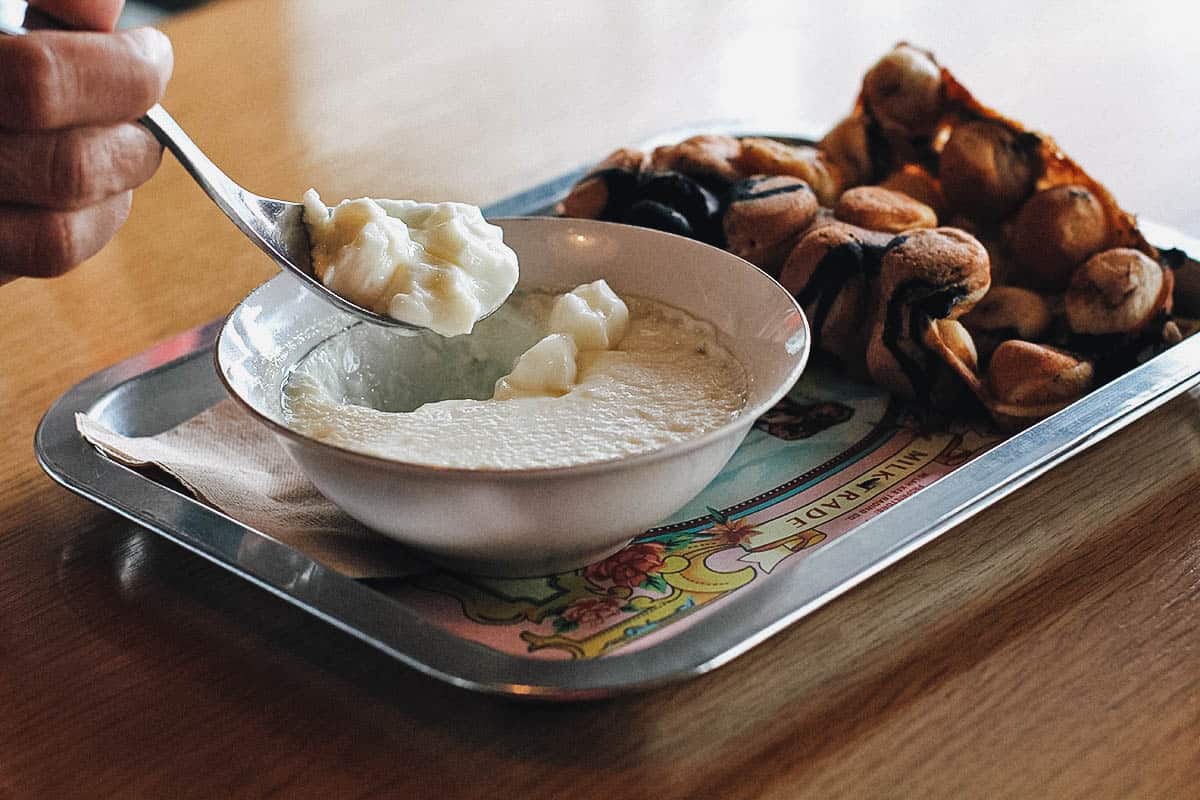 Hole in the Wall – CLOSED

Ren and I both love Mediterranean food and Hummus Elijah is probably one of the most authentic restaurants we’ve been to so far in Manila. You can tell from its largely Middle Eastern clientele that this place is the real deal. 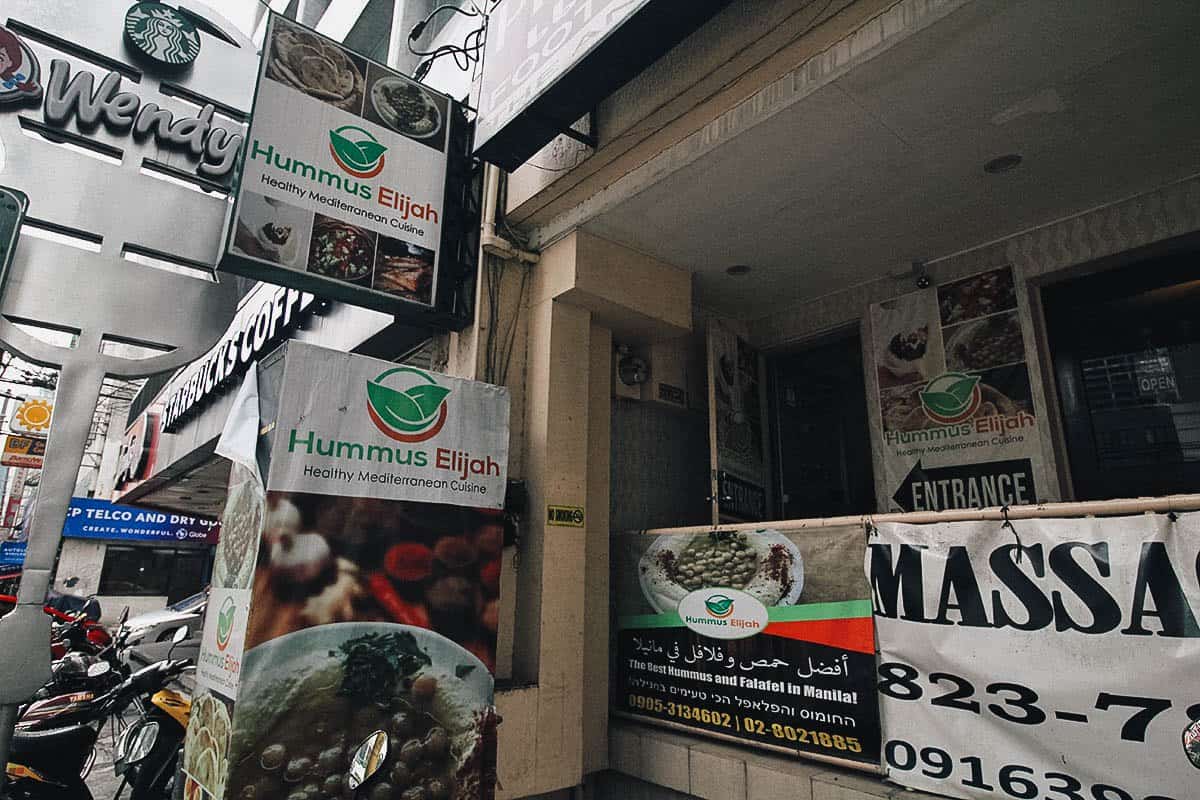 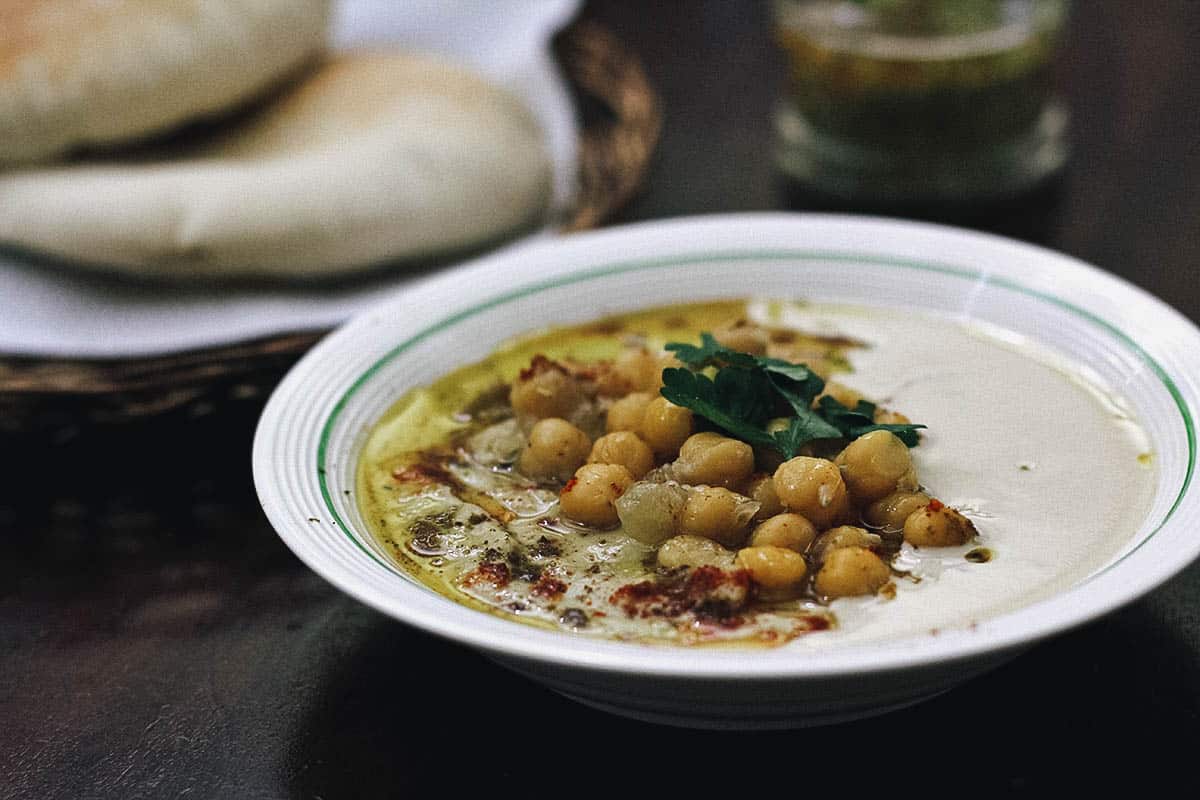 Dan Barmatz contributed an article on Israeli sabich for our National Dish Quest. I’ve been wanting to try it ever since so I was pleased to find it here (PHP 180). A sabich is a pita bread sandwich made with fried eggplant, hummus, hard-boiled egg, and salad. It was delicious and healthy. 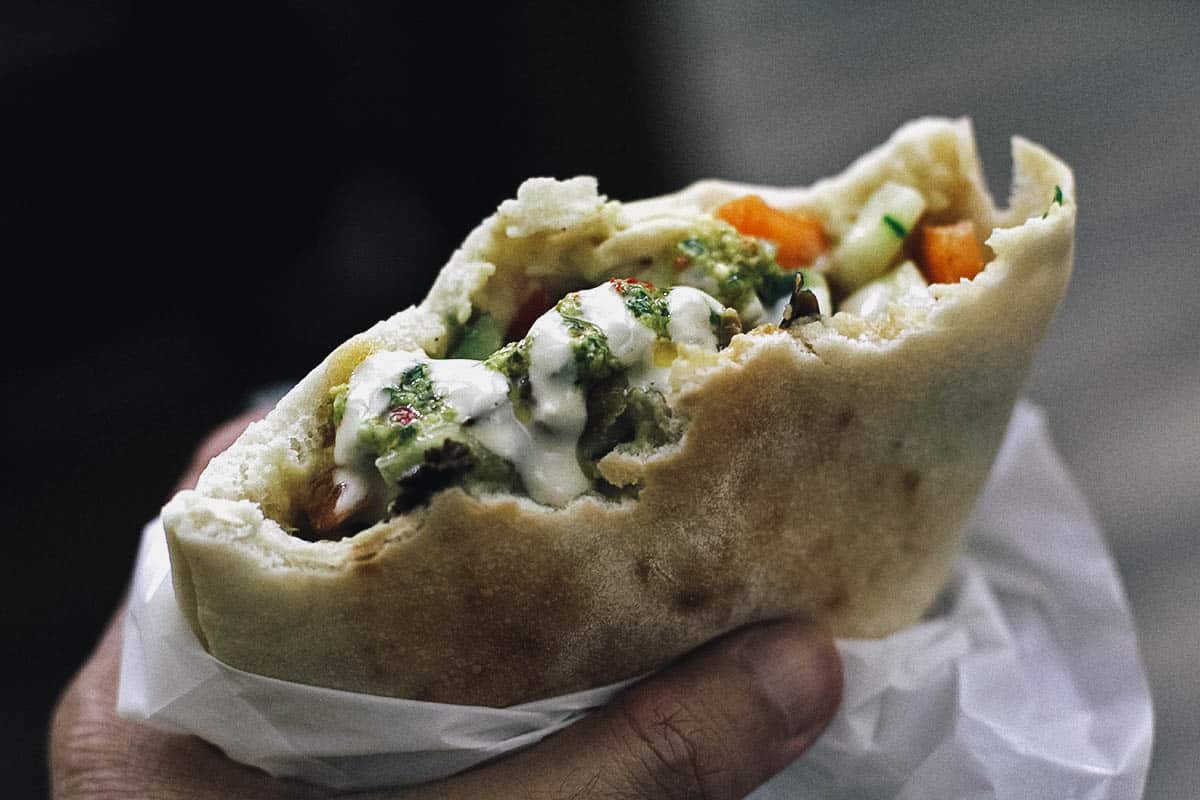 Locals who enjoy cooking Mediterranean food will be pleased to know that Hummus Elijah carries many different types of spices as well. 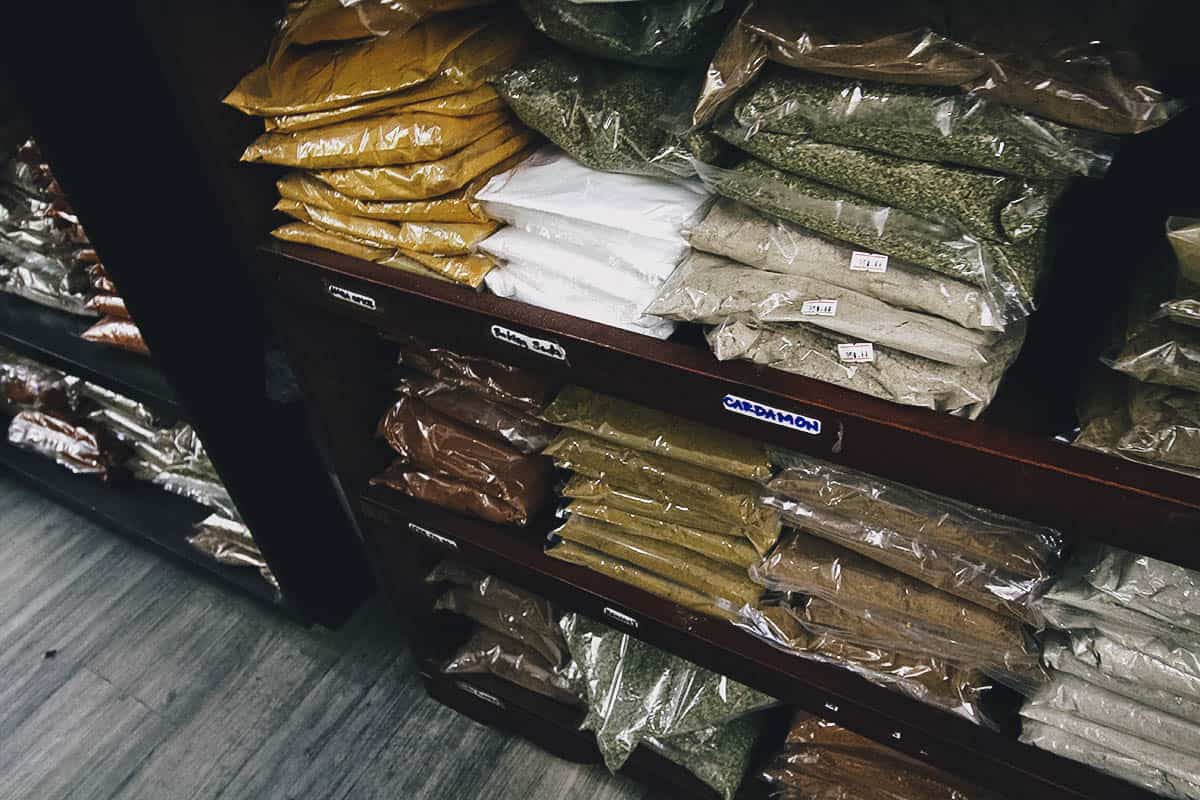 Pura Vida is located to the right of Z Hostel and serves Costa Rican food. We didn’t stay long enough but it looks like they play live music here as well. 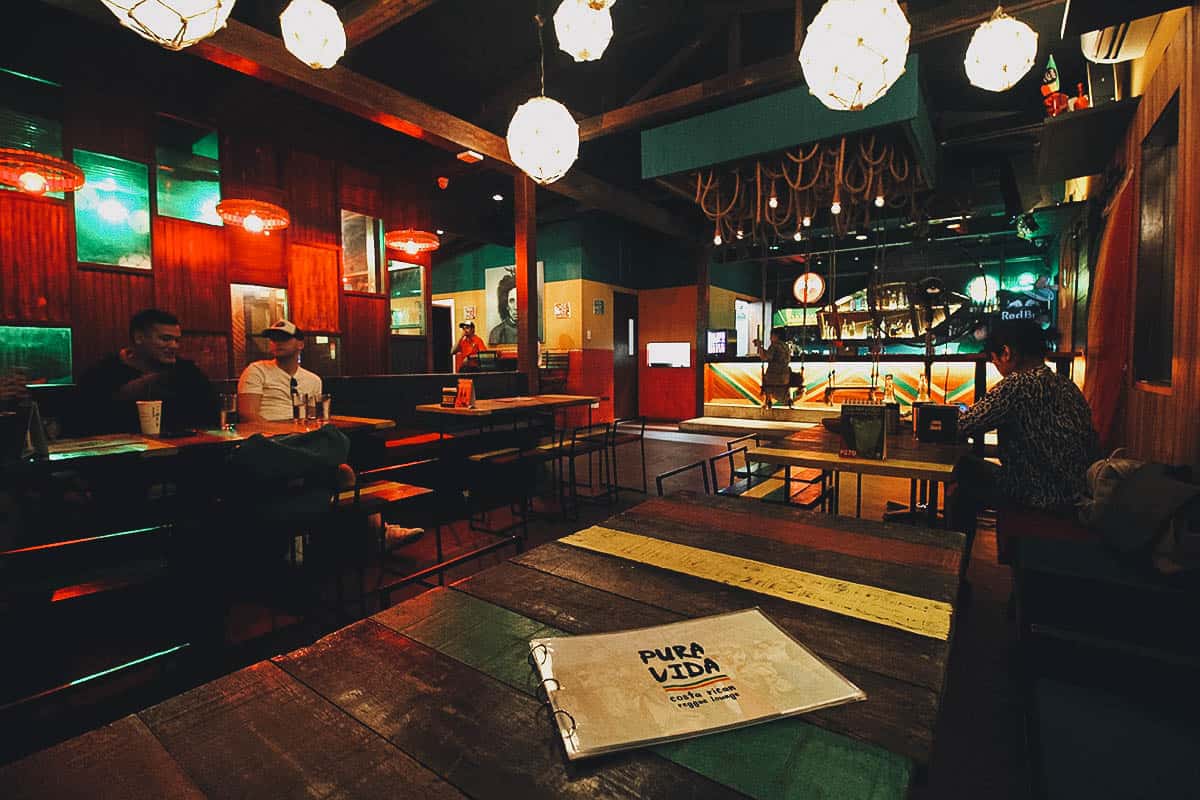 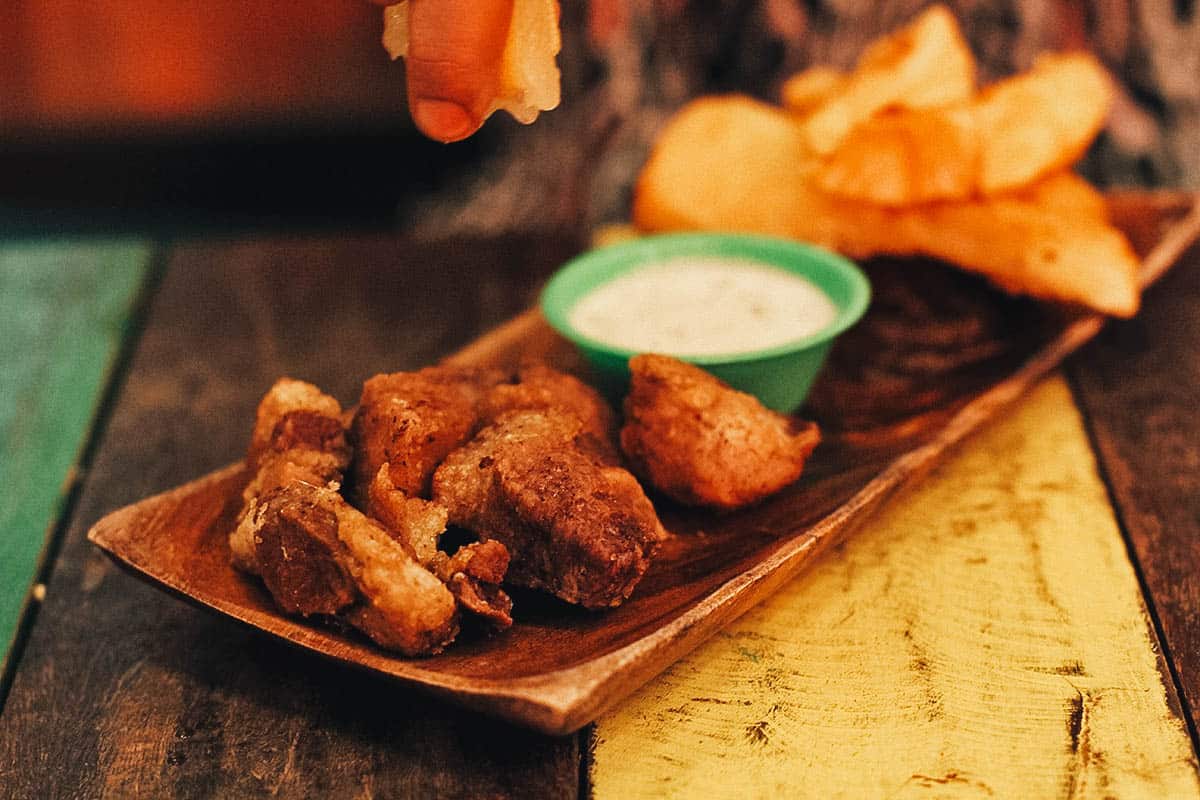 We ordered this casados (PHP 350) because it was described on their menu as being a “typical Costa Rican lunch”. 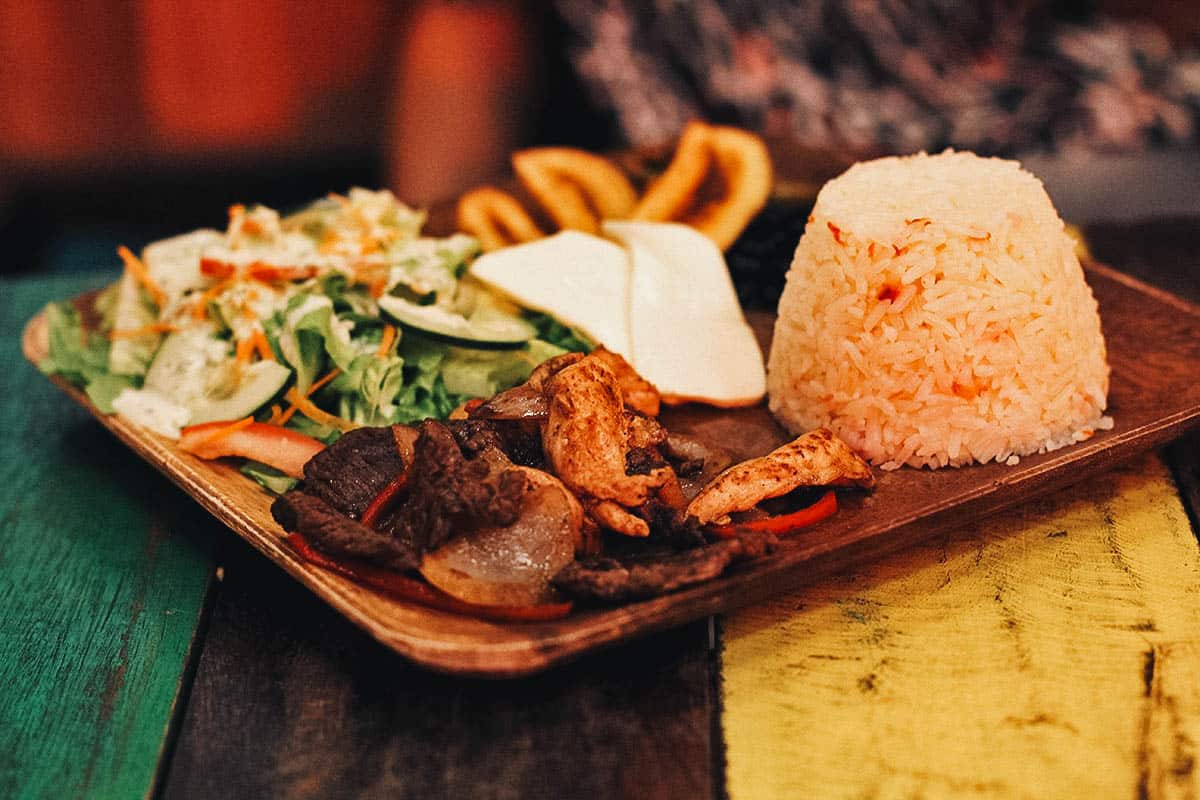 We were super excited to try this place. I love Indian food and Royal Indian Curry House (or RICH for short) has one of the highest ratings we’ve ever seen of any restaurant on Zomato. They did not disappoint. 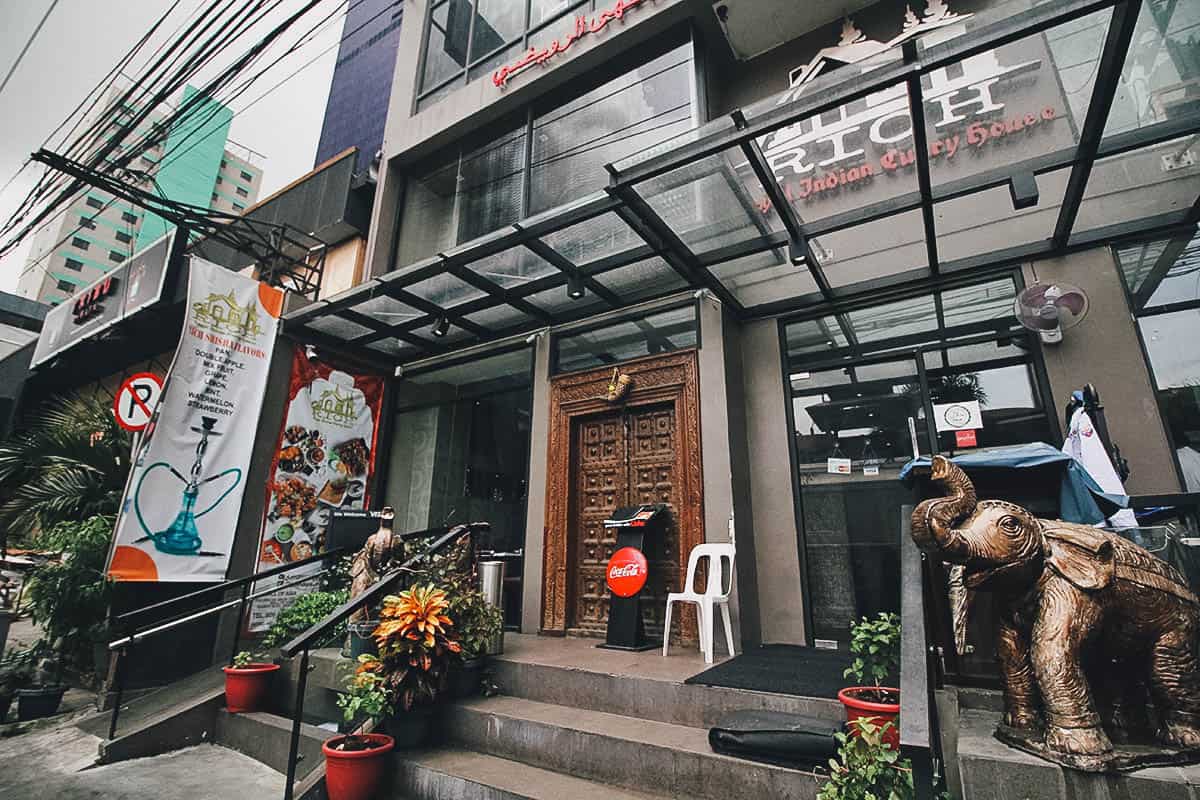 Ren always orders biryani but this was the first time we’ve ever had Hydearabadi biryani (PHP 599). Hyderabadi biryani is a form of biryani from Hyderabad, India. It’s typically served in a vessel sealed with dough. 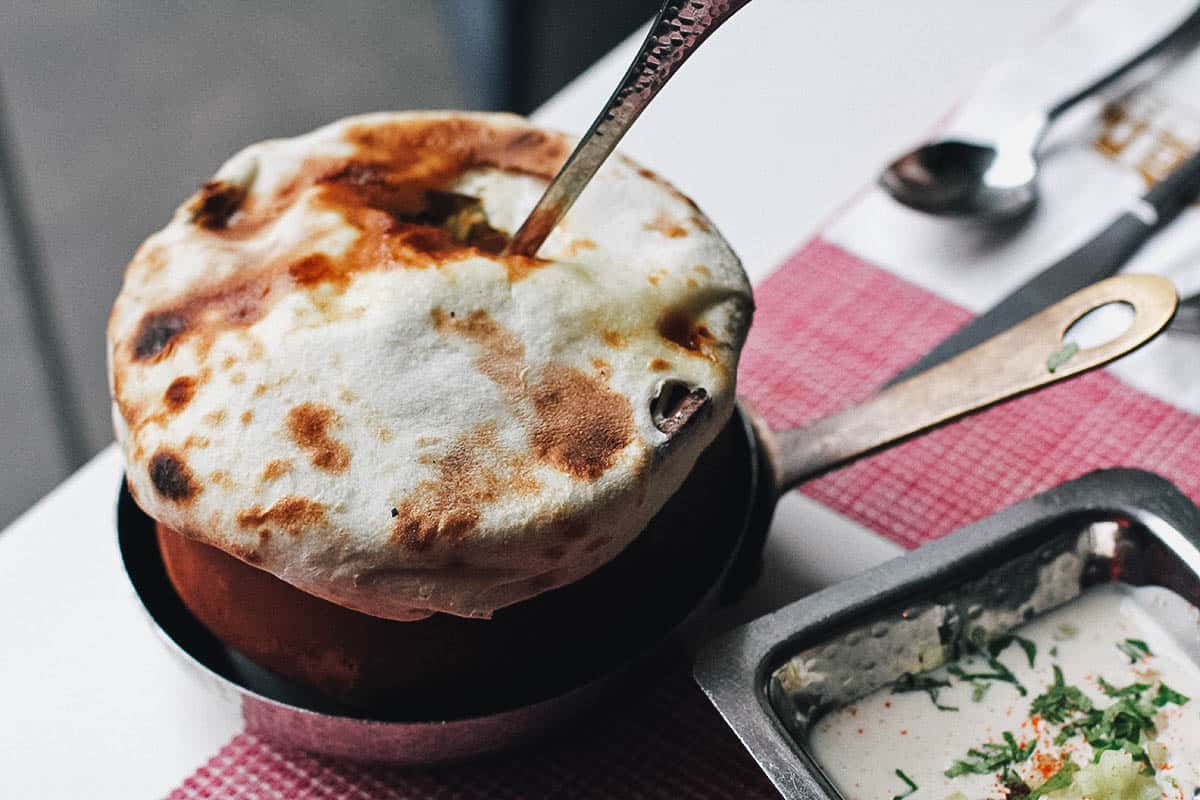 Break through the dough to get to the delicious biryani inside. I’m not as partial to biryani as Ren, but this was by far the best biryani I’ve ever had in my life. Made with lamb and served with a side of yogurt, it was absolutely delicious. 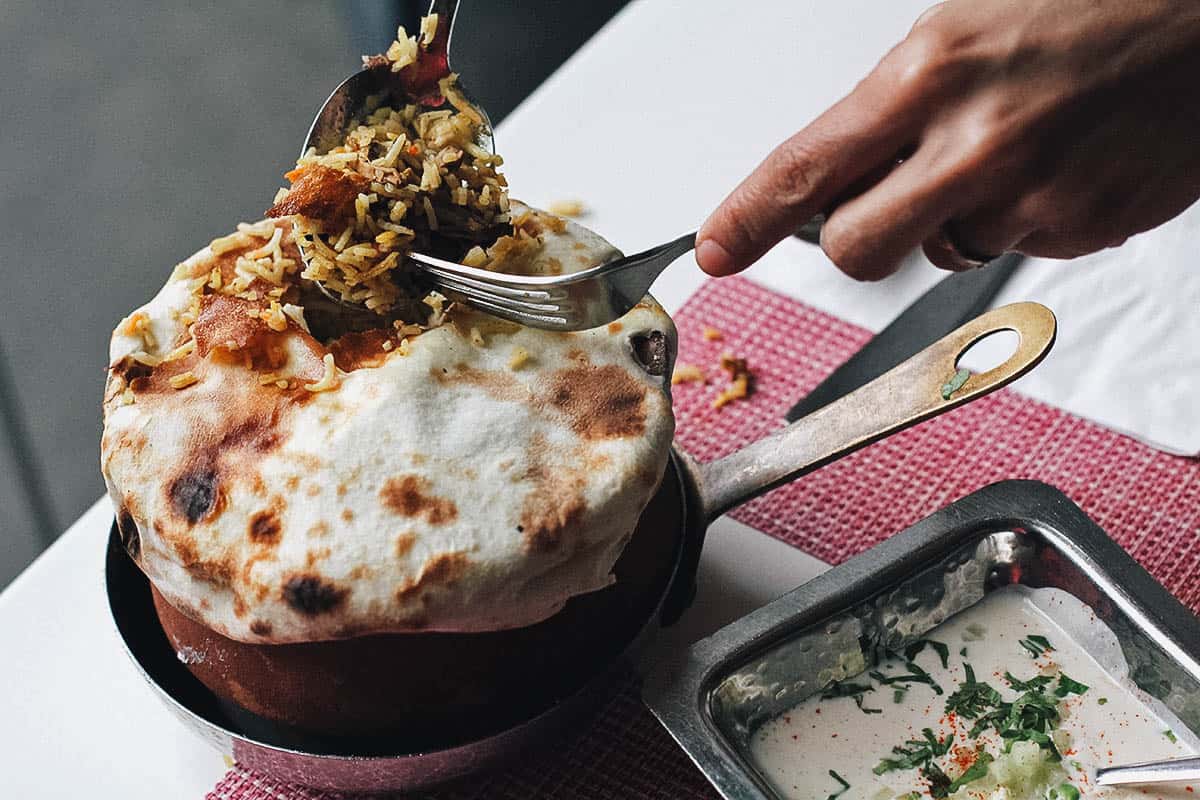 No matter how many items an Indian restaurant has on its menu, you can be guaranteed that I’ll be ordering just one of two dishes – murgh makhani (butter chicken) or chicken tikka masala. Today, I went with the murgh makhani (PHP 439). Yes, it was every bit as scrumptious as it looks below.

Few things give me more joy than dipping pieces of naan bread (PHP 119) in curry. I love it. We enjoyed this restaurant so much that we’ll definitely be coming back. I’ll go for the tikka masala next time. 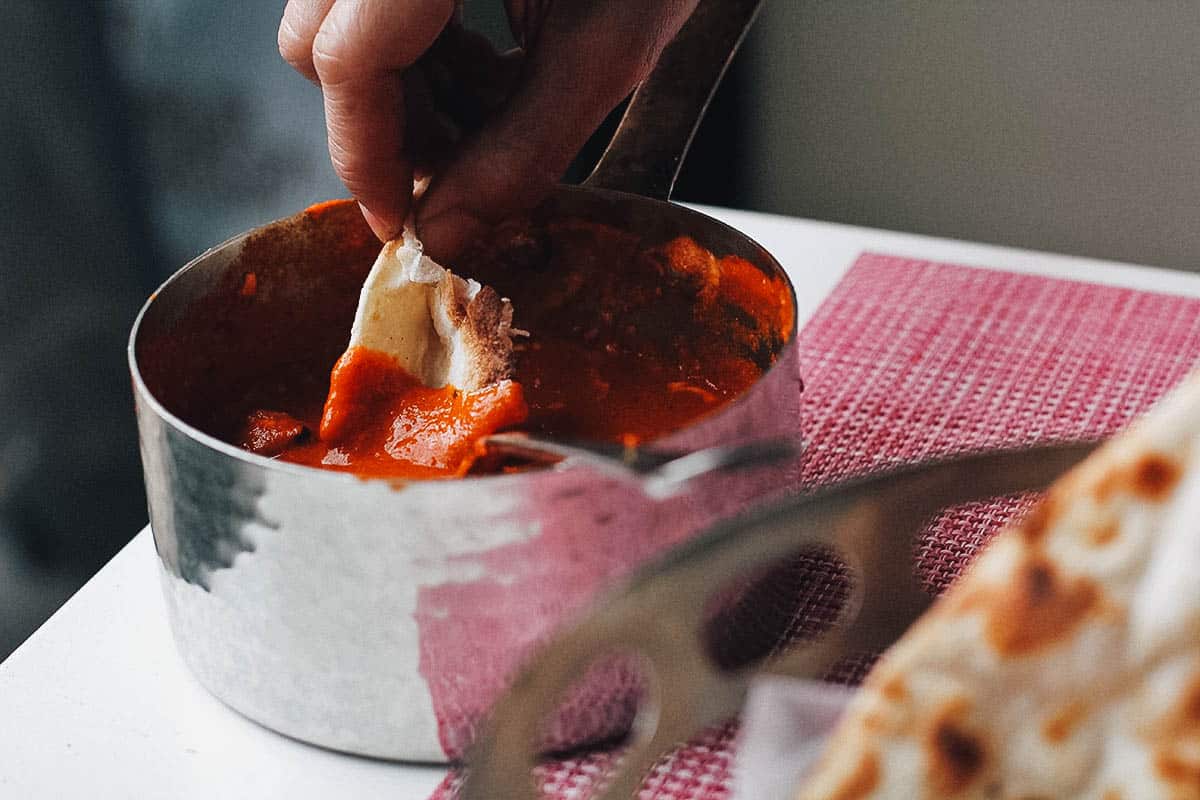 Tambai is one of our favorite places to visit in Poblacion. They’re one of the cheapest places for local beer in the area and their yakitori sticks are the perfect bar food. Of all the establishments here, this is the one place we always go back to on every return trip to Poblacion. 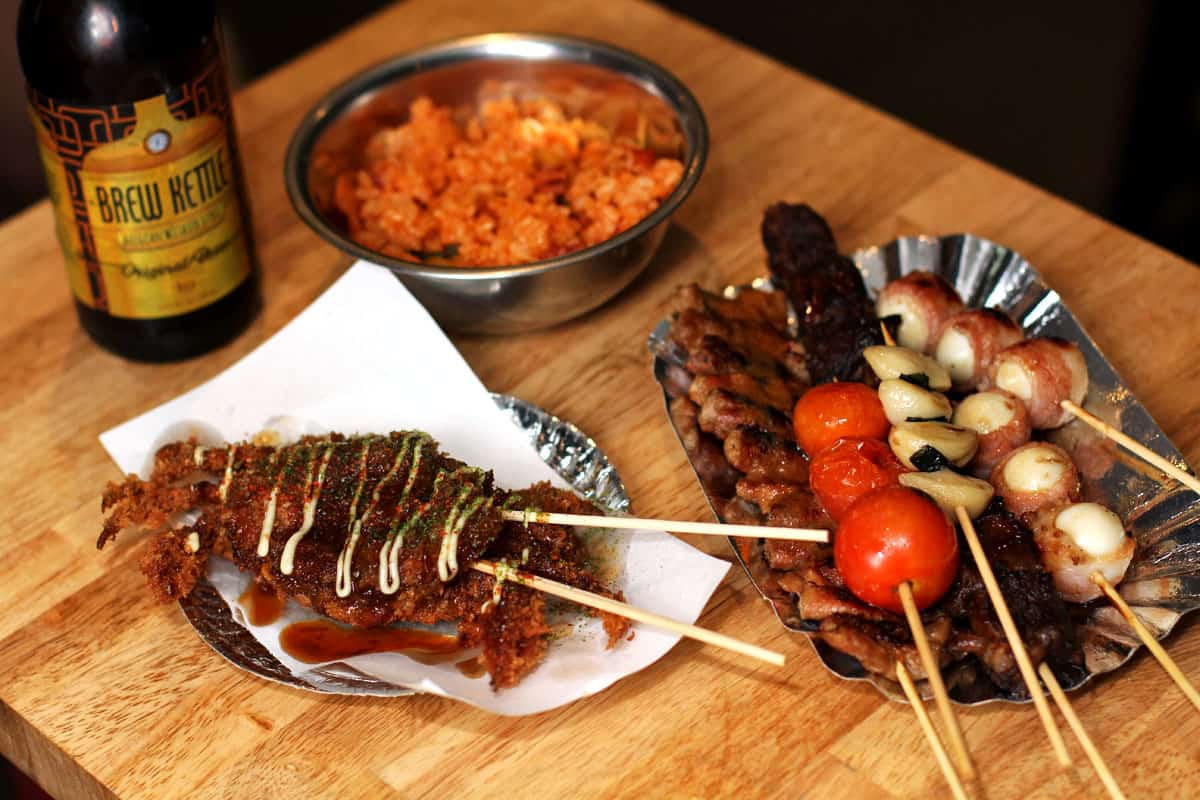 Filipinos love to eat so the restaurant landscape is always changing. As frequently as new places open up, perhaps just as many close down. As described, Poblacion is a trendy area so you can expect many more restaurants to pop up in the neighborhood in the coming years. I’ll be sure to update this list as often as I can.

Please be advised that these weren’t the only restaurants with at least a 4.0 Zomato rating in July 2017. We have limited stomach space so we could only visit so many over one weekend. Food is a subjective experience so I encourage you to do some exploring of your own and find the restaurants that appeal to you. Discovering these little hole-in-the-walls is half the fun.

To better understand the Poblacion area, you can check out the map below. It’ll show you exactly where these places are on a map as well as hotel and shopping recommendations. They’re all walking distance from one another so you never have to hop into a car to go from one place to the next.

I hope this whets your appetite and inspires you to go on a Poblacion food crawl. Thanks for reading and have an awesome time traveleating in Poblacion!

Why is there not a single Filipino restaurant mentioned here?