I thought I had it all figured out. I thought I knew what the difference was between a souvlaki and a gyros.

A souvlaki is a dish of grilled meat served with a side of vegetables, fried potatoes, tzatziki, and pita bread. Like American hamburgers, it’s a popular fast food and considered a Greek national dish. A gyros is basically the same thing, but in sandwich form, right?

When we went to Athens and Santorini, I was surprised to find souvlaki wrapped in pita and deconstructed gyros served on a platter. What sorcery was this?? It threw me off and told me that my understanding of souvlaki and gyros was skewed and incomplete, if not wrong altogether.

Both dishes look the same. So how exactly were they different? That’s what I sought to find out in today’s National Dish Quest post. 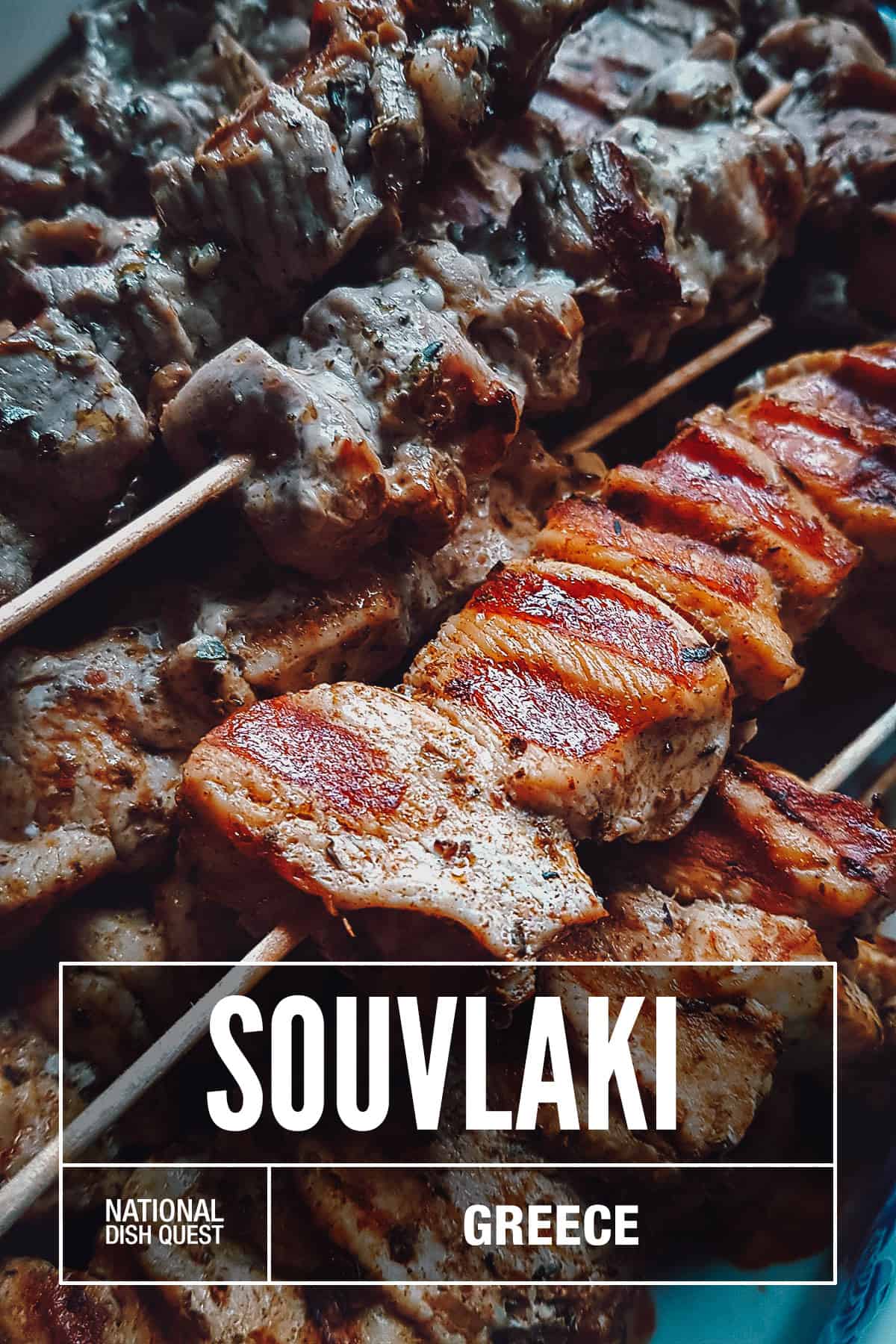 Photo by poulasohn via Pixabay

WHAT IS A SOUVLAKI?

A souvlaki is a popular Greek food consisting of grilled pieces of meat served on a skewer. It’s commonly made with pork or chicken, though other types of meat like lamb or beef can also be used. The meat is typically served on a platter with vegetables, fried potatoes, pita bread, tzatziki (yogurt dip), and a wedge of lemon.

Here’s a hefty chicken souvlaki platter from the O Thanasis restaurant in Monastiraki, Athens. Note how juicy and succulent the skewered pieces of meat look. Delicious! 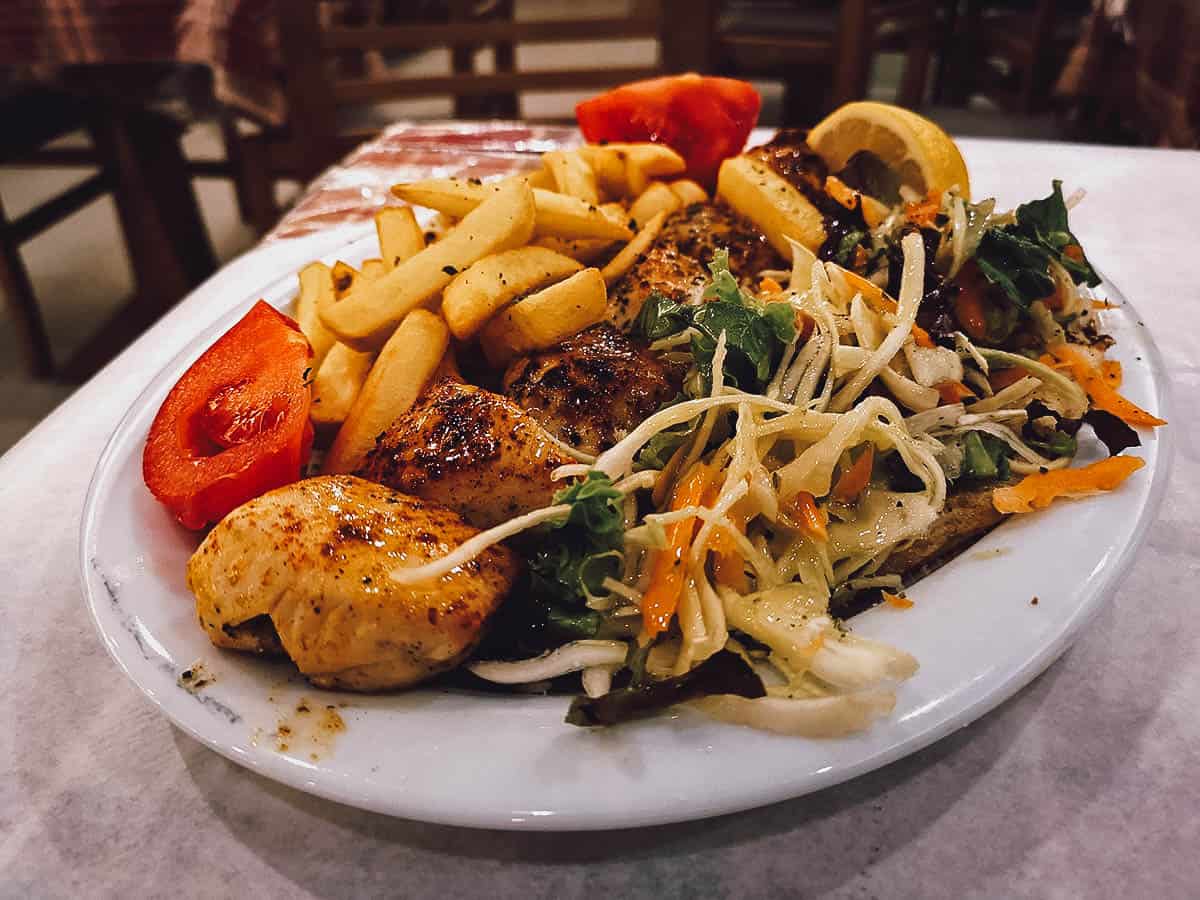 A beautiful portion of pork souvlaki at Tavern Tzanakis in Santorini. 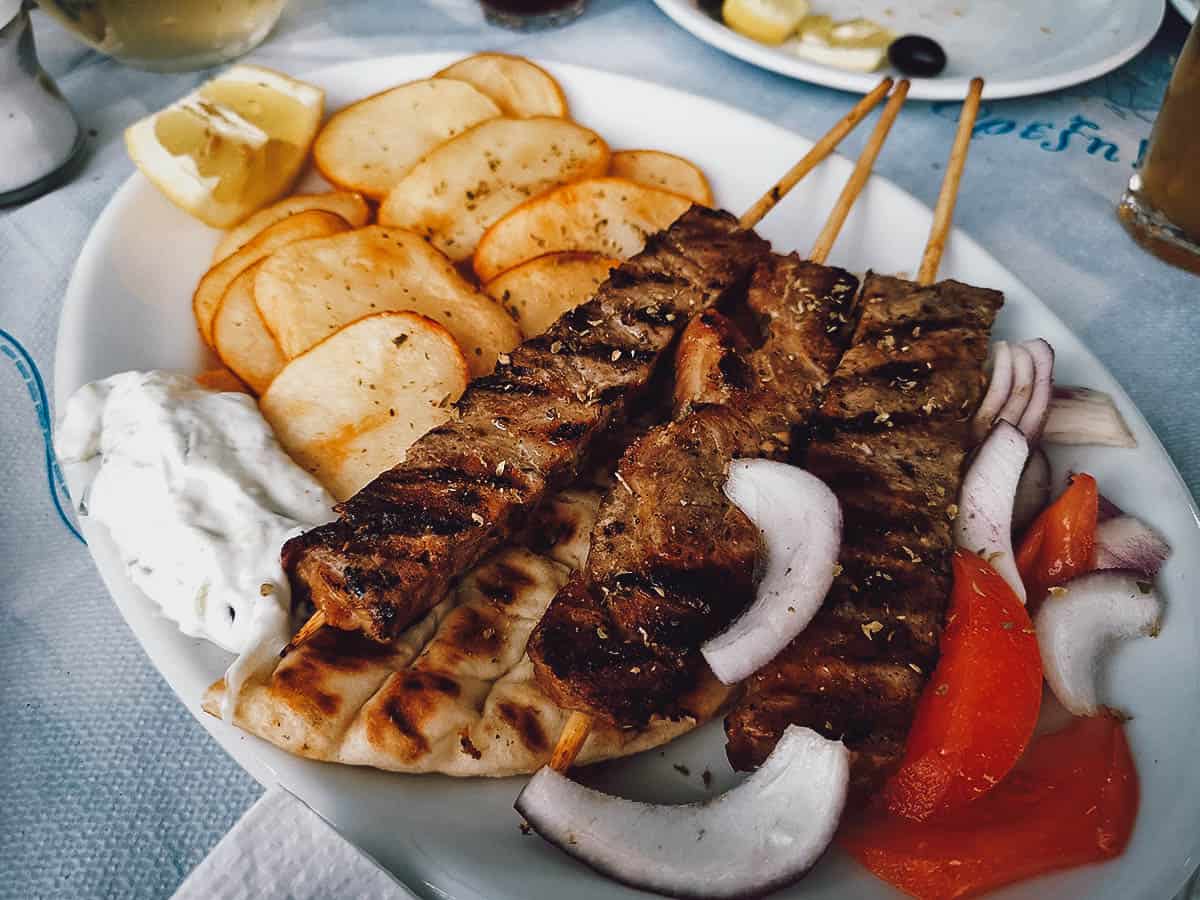 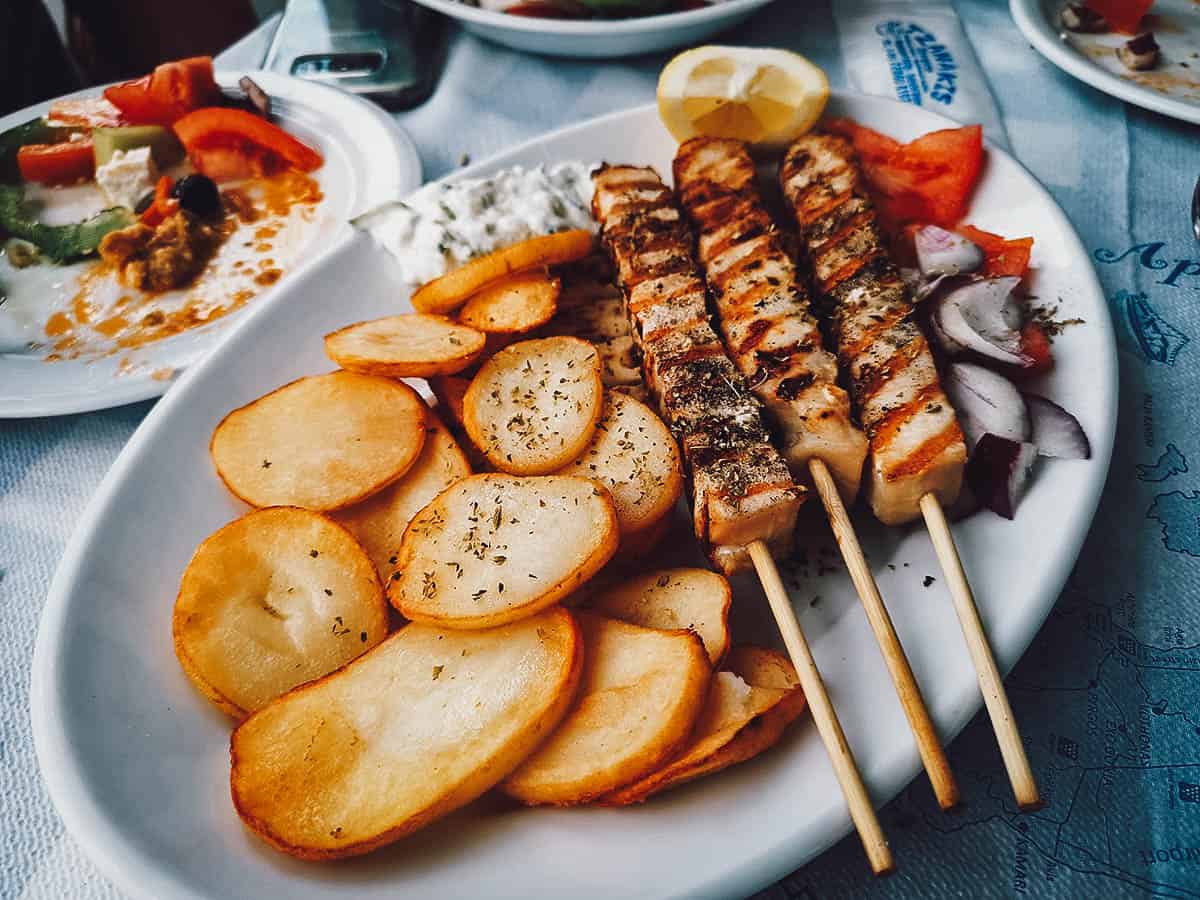 This was the souvlaki pita in Santorini that turned my notion of souvlakis and gyros on its head. Contrary to what I believed, souvlakis can come in sandwich form like this.

This souvlaki pita from Lucky’s Souvlakis in Fira was absolutely delicious and one of my favorite things to eat in Santorini. 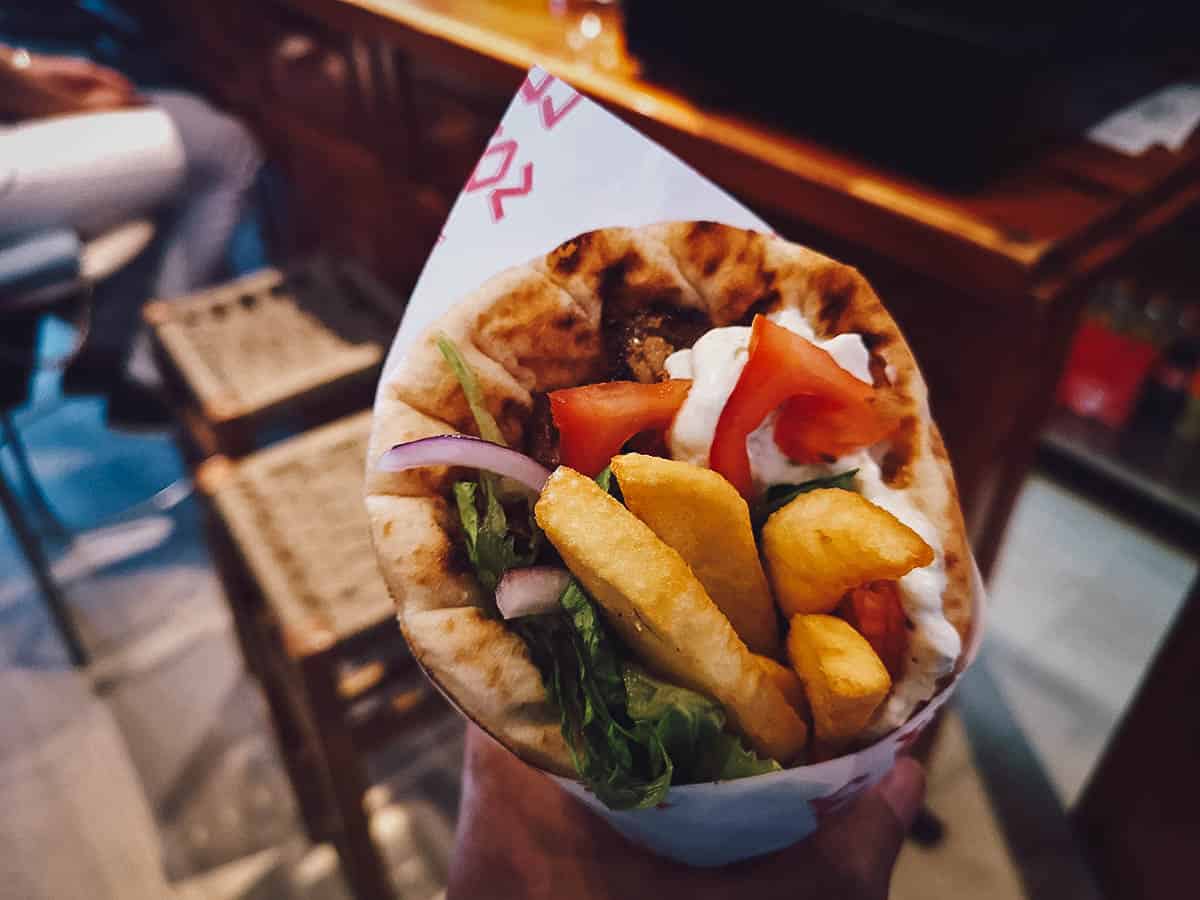 WHAT IS A GYROS?

Like a souvlaki, a gyros is a popular Greek fast food. It’s made by thinly slicing meat grilled on a vertical rotisserie. Pork and chicken are commonly used, though it can be made with lamb or beef as well. Gyros are often served in pita bread as a wrap, though they can be served in full portions as well with fried potatoes, vegetables, tzatziki, and lemon.

Pictured below is a delicious example of a chicken gyros wrap from pitoGyros in Oia, Santorini. Note the shaved pieces of chicken. I’ll get into it more below but this is the basic difference between a souvlaki and a gyro.

It’s interesting, souvlakis and gyros seemed equally popular in Greece but globally, gyros seem to be more well-known, especially in the US. I lived for over a decade in the states and I saw many gyros shops in different cities, but I had never even heard of souvlakis. Gyros wraps became popular in the US after the vertical meat rotisseries were mass produced in the mid-1970s. 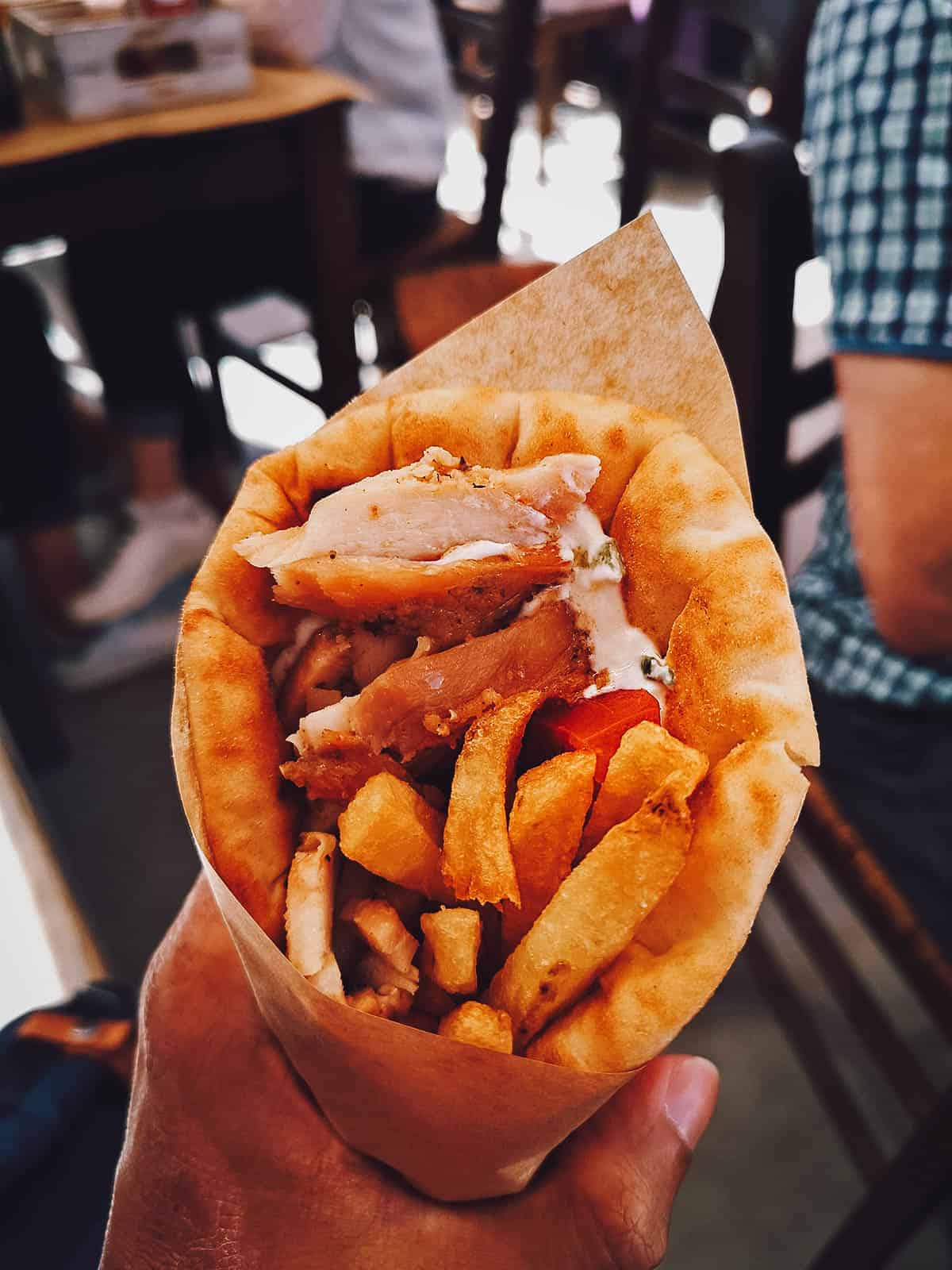 I don’t see this as often but here’s an example of gyros served as a full portion. Like souvlaki, gyros portions are more expensive because they come with more meat. 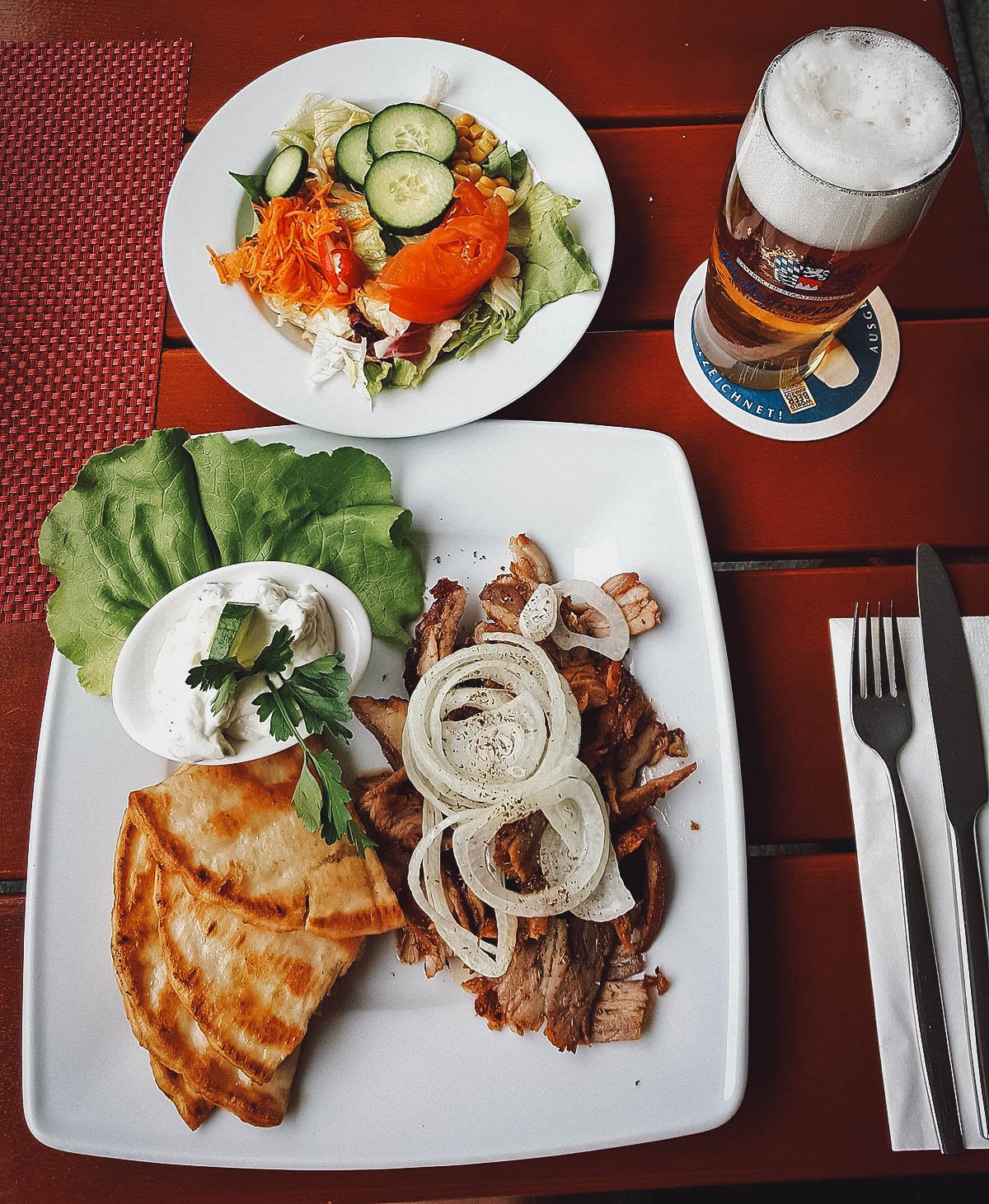 SO WHAT’S THE DIFFERENCE BETWEEN A SOUVLAKI AND A GYROS?

Based on the descriptions above, can you tell what the difference is between a souvlaki and a gyros?

Both are Greek fast foods made with meat. Both are served with vegetables, fried potatoes, tzatziki, and lemon. Both can be served as wraps or as full portions. The difference it seems, is in how the meat is prepared and cooked.

Souvlaki is made with small pieces of grilled meat skewered on a stick, while a gyros consists of slices of meat shaved from a vertical rotisserie.

Google “differences between souvlaki and gyros” and you’ll find much confusion surrounding these two dishes. Sometimes, it even turns into a heated debate! The terms can even be used colloquially and can mean slightly different things in some parts of Greece (like Thessaloniki), but I won’t get into that here because it only adds to the confusion.

Based on my research, the underlying difference between souvlaki and gyros, seems to be in how the meat is prepared.

WHAT ABOUT DONER KEBABS AND SHAWARMA?

Now that we’ve cleared that up, let’s make it confusing again.

If a gyros refers to a vertical rotisserie of meat, then what’s a shawarma? You’ll find shawarma everywhere in the Middle East and it looks exactly like a gyros. What’s the difference? While a gyros and shawarma do look one and the same, the difference in this case, is where they’re served. 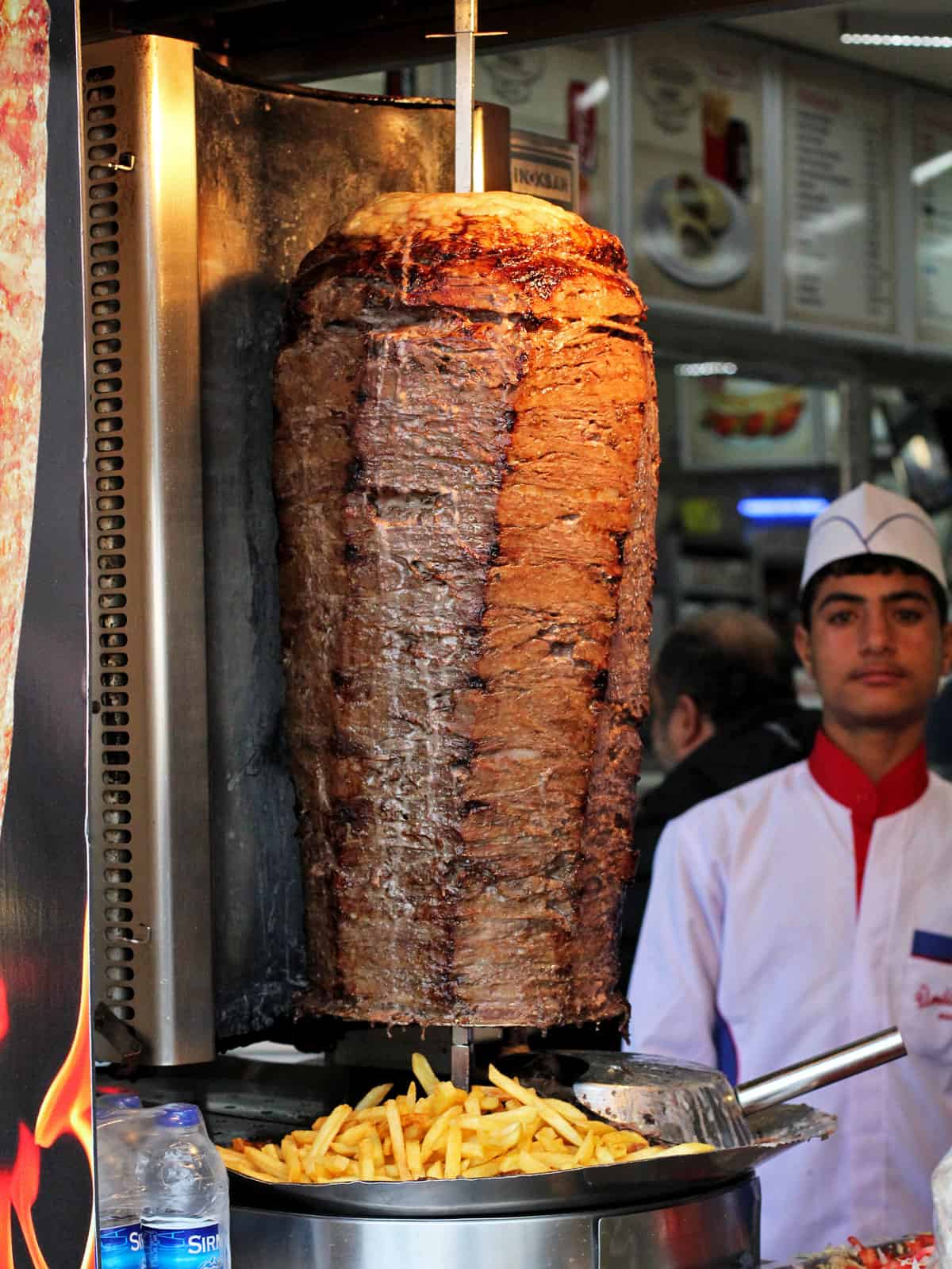 Both are vertical stacks of meat that evolved from the Turkish doner kebab. In the 19th century, the Ottoman Turks developed this unique way of stacking seasoned meat that cooked on a horizontal rotisserie. The vertical rotisserie was later introduced and found its way to other countries, evolving to become the gyros in Greece and the shawarma in the Middle East.

In fact, the words gyros and shawarma both mean the same thing. Gyros comes from the Greek word γύρος meaning “circle” or “turn”, while the word shawarma is derived from the Turkish çevirme meaning “turning”.

Even the Mexican al pastor method of cooking meat is an evolution of the doner kebab. It was brought to Mexico by Lebanese immigrants in the 1930s. Fascinating stuff!

WHICH ONE TASTES THE BEST?

So this brings us to the most important question of all, which one tastes best? That’s easy. All of them!

We’ve had souvlaki and gyros in Greece and doner kebabs in Turkey. We haven’t been to the Middle East but shawarmas are exceedingly popular in our native Philippines because of the large number of Filipinos working in countries like Saudi Arabia, the UAE, Qatar, and Kuwait.

When made well, they’re all absolutely delicious – smokey and juicy and wrapped in the most delectably warm and pillowy pita bread. They’re among our favorite snacks to eat and something we can see ourselves having everyday. In the Philippines, shawarmas are smaller and I can easily eat three or four in one sitting!

Learning the difference between souvlaki and gyros and tracing the latter’s origins to the Turkish doner kebab was interesting. It reminded me why I enjoy food so much, not just for the taste but for its stories.

Like people, food migrates from place to place, starting off close to the original then slowly evolving over time to become its own. Mexican al pastor is the perfect example of this. We’re seeing that now with our Philippine version of shawarma which is already deviating from its Middle Eastern roots, but that’s a story for another post.

I hope you enjoyed reading this article as much I enjoyed writing it. Food, in a cultural context, truly is fascinating.

When I lived in The Bronx in New York, I made friends with a Greek restaurant owner that immigrated to the U.S. in the sixties. His souvlaki he said was a combination of lamb, pork and veal, seasoned then roasted on the vertical rotisserie. It was delicious. I've found that the fast food restaurant "Arbies" comes the closest to the taste i learned to love. I now treT myself to the Abies gyros, weakly.

Thanks for sharing Edward! Love hearing stories like that. Have you tried souvlaki in Greece? I'm curious to see how well it compares to the souvlaki you've come to love.

Having spent two years in neos cosmos, there was one street vendor who used only lamb. When returning to the states, saw a sign in wash, DC for real souvlaki. Wasn't even close. .

@William: Yeah, that's usually the case. Rarely have I found a dish as good as it would be in its native country. The ingredients, climate, etc is just different.

As a Greek, I can confirm that you got it right..!😊 Souvlaki is pork (usually) or chicken pieces of meat, skewed and grilled over charcoal or electric grill. It can be served either alone (by piece), on a plate (as a portion with side dishes, potatoes and tzatziki), or as a sandwich (in pita bread or other types of bread, with or without potatoes, tomato, tzatziki, onion). Gyros is small pieces of meat of pork (usually) or chicken, cut off from bigger pieces, which are roasted vertically over electric or gas rotisserie. As these big pieces of meat turn slowly around, the outer parts (which, as they come closer to the heat, they are grilled), are cut in small pieces. These pieces, can then be served either as a portion of gyros, or in a sandwich (in pita bread or other types of bread). There are some minors differences between some parts of Greece, the basics are these.

Thank you Nikos! That's really great to hear from a local. :)

And by the way there was never a hint of patates mesa!

When I lived in Athens many many years ago, my favourite street food was ‘souvlaki’. The minced spiced meat carved from a block and served in soft pita bread With tzatziki, red onion, lettuce and a sprinkle of paprika. Heaven! I never heard the word ‘gyros’ until my daughter took up with a Cypriot chef! Is it possible that the word emanated from Cyprus maybe?

Thanks for sharing June! :)