In Indonesia, you’ll find two groups of soup dishes – soto and sop. There’s actually a third called sayur, but it’s considered more of a stew than a soup so we won’t get into it here.

Throughout Indonesia you’ll find many different variants of soto and sop dishes, with a clear distinction made between the two. They looked the same to an outsider like me but some soup-like dishes were clearly labeled “soto” and others “sop”. Why is that? And why the need to make that distinction between soups? 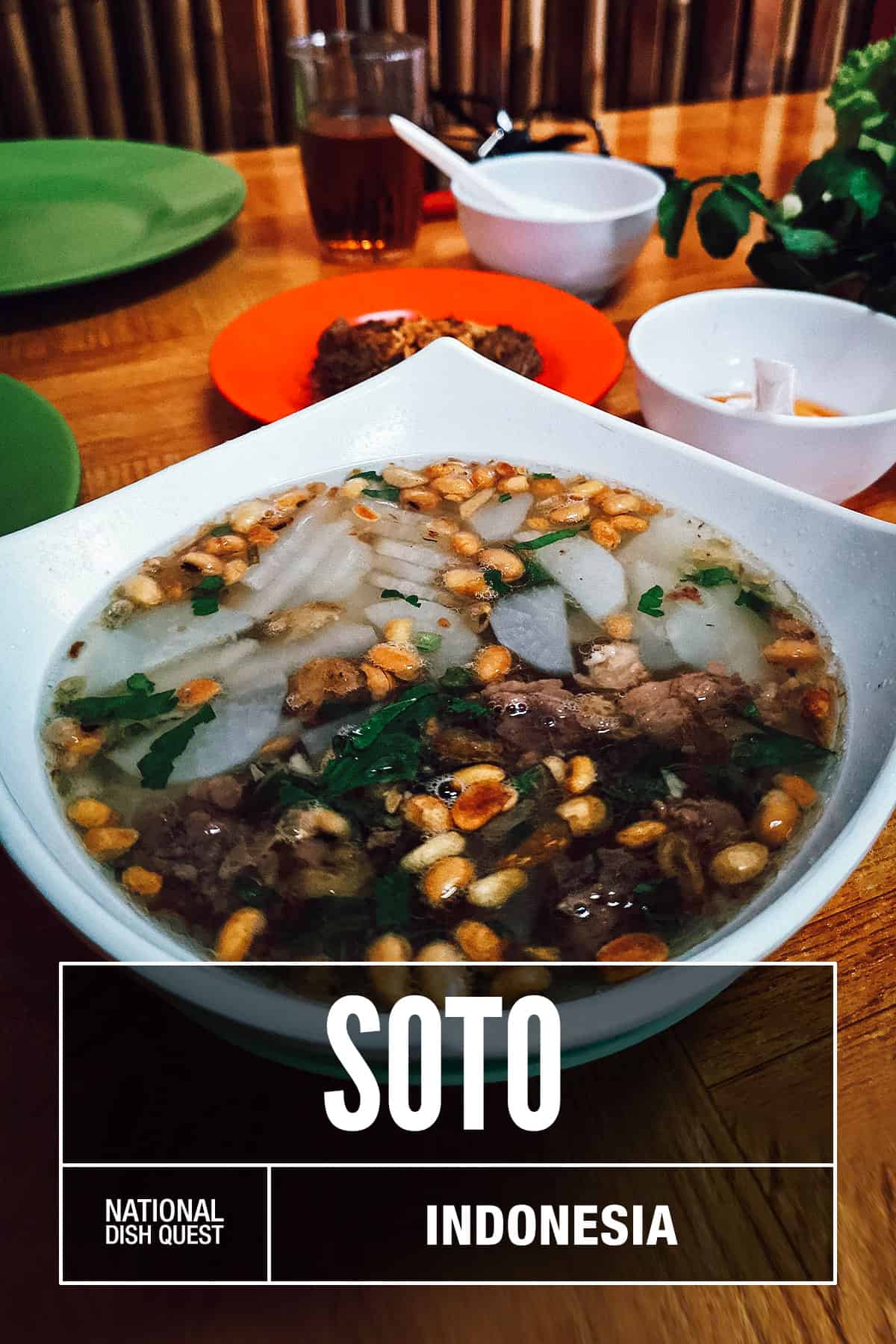 Soto is a traditional Indonesian soup made with different types of meat and vegetables. It’s consumed throughout Indonesia in many forms, its myriad variations named after the region where it’s from or the primary ingredient used.

Soto is most often made with chicken or beef though other types of meat like mutton and buffalo can also be used. Because of its predominantly Muslim population, pork is rarely used except in non-Muslim-majority provinces like Bali and North Sulawesi.

Like many Asian soups, soto can be a full meal served with copious amounts of meat, rice, noodles, crackers, and egg.

Googling the definition of sop is where things get interesting. According to Wikipedia, the only difference between soto and sop is that soto is a traditional Indonesian soup whereas sop is a soup with foreign influences. I don’t know how accurate that is because I can’t find other sources to back up that claim.

Even locals seem to be confused by the distinction. Some say sop refers to clear soups while soto contains coconut milk. One person claimed that soto is never made with pepper but many recipes seem to contradict that. In truth, no one seems to really know.

As is often the case with food, the true story of its history is lost over time. But if Wikipedia were to be believed, then the distinction as defined by influence makes for a much more interesting conversation.

What is the relationship between food and national identity? Are we truly defined by what we eat?

Wikipedia’s definition of soto and sop raised questions I never before thought of asking. For instance, why is it so important for us to eat dishes that are “authentic”? Why do we get so protective when another culture tries to claim our food as their own? What is it about food that makes us so territorial?

Ren once published a Thai fusion recipe for a Filipino dish called sinigang that included coconut milk and readers were up in arms about it. “Why did you add coconut milk? What kind of sinigang is that?! That’s not sinigang. No one puts coconut milk!” Simmer down people. It’s just an ingredient she was experimenting with. Why all the emotion?

I used to think it was only because of taste but reading up on food and national identity, I realize now it’s about so much more than that.

For many of us, food isn’t just for sustenance. It isn’t just an indulgence. Like language, art, and music, it’s a symbol of our cultural heritage the distortion of which can threaten our national identity.

Whether we’re aware of it or not, we assert our national identity through our food so to some people, coconut milk in sinigang isn’t just an ingredient. It’s a dilution of who we are.

Which brings me back to soto and sop. If it’s true that sop is indeed defined as Indonesian soup with foreign influences, then I can see the need for the distinction, especially when the conversation is about identity and cultural heritage. For a country like Indonesia that’s been under European influence for three-and-a-half centuries, having achieved their independence only in the last 75 years, then the time to assert their national identity is now.

The reason for the distinction may be debatable, but one thing is clear – soto and sop are must-try dishes in Indonesia, each with a seemingly limitless number of variations. I’m not so sure about sop, but different types of soto are named after the region they’re from or the primary ingredient used to make them. Here are a few examples.

Soto Bandung is one of the most well-known variations of soto. It’s a clear beef soup from Bandung, the capital of West java province. It’s noted for its use of white radish and fried soy nuts which I believe is unique to the region. 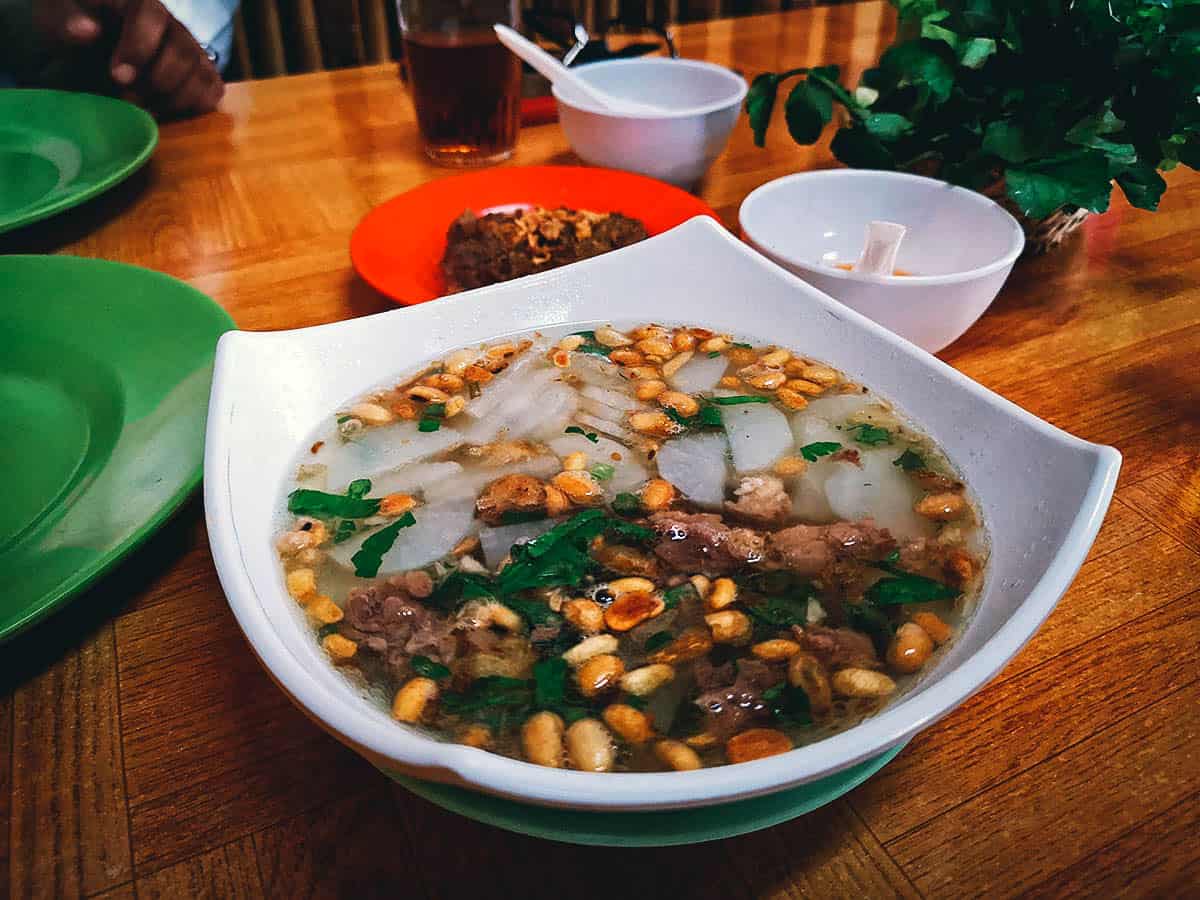 Soto Banjar is from Banjarmasin, the capital of South Kalimantan province. It’s a type of chicken soup made with potato pancakes, rice cakes, and hard-boiled eggs. 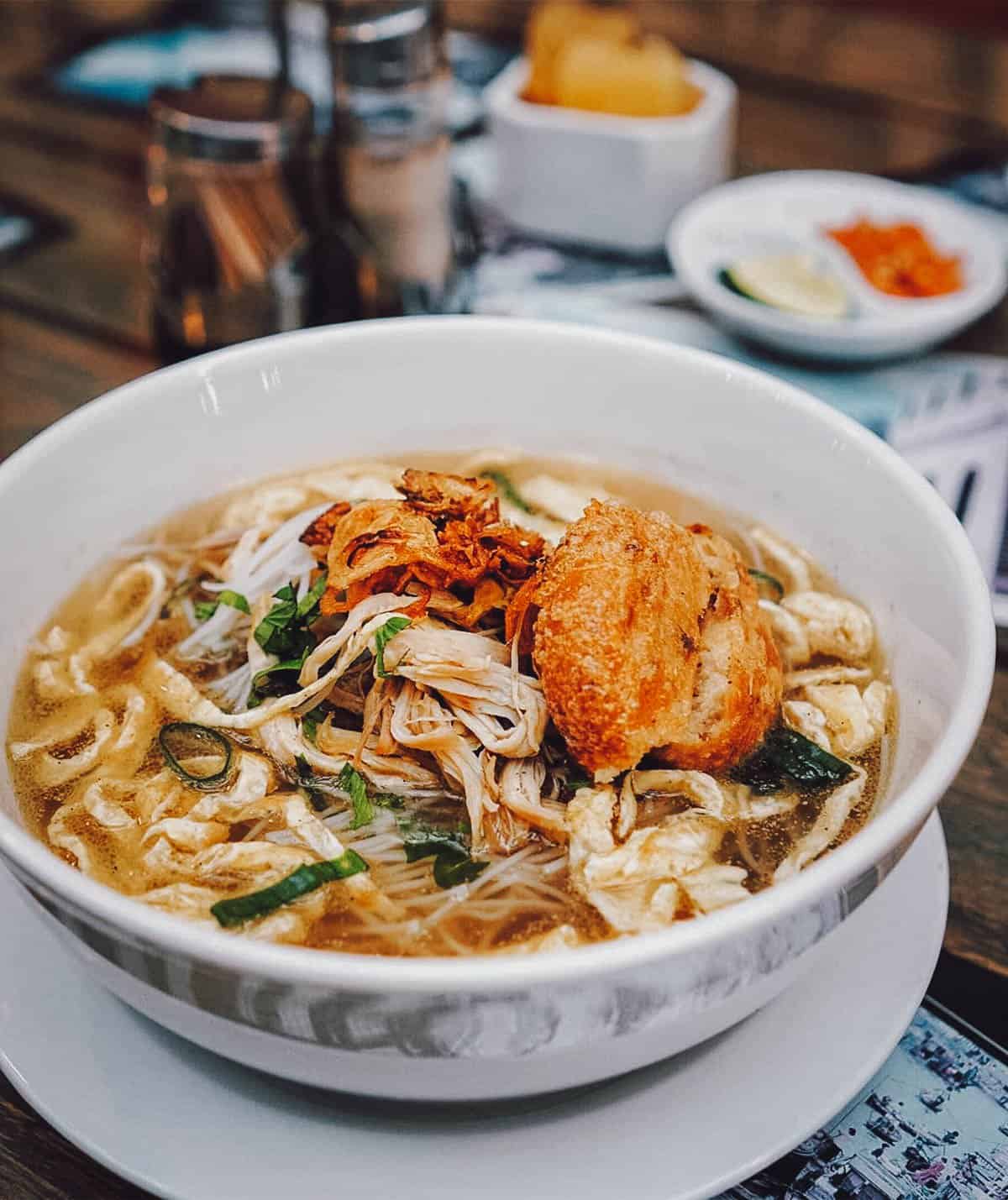 If you’re visiting Jakarta, then you may want to try Soto Betawi. It’s a native Jakartan beef soup made with coconut milk or fresh cow’s milk. 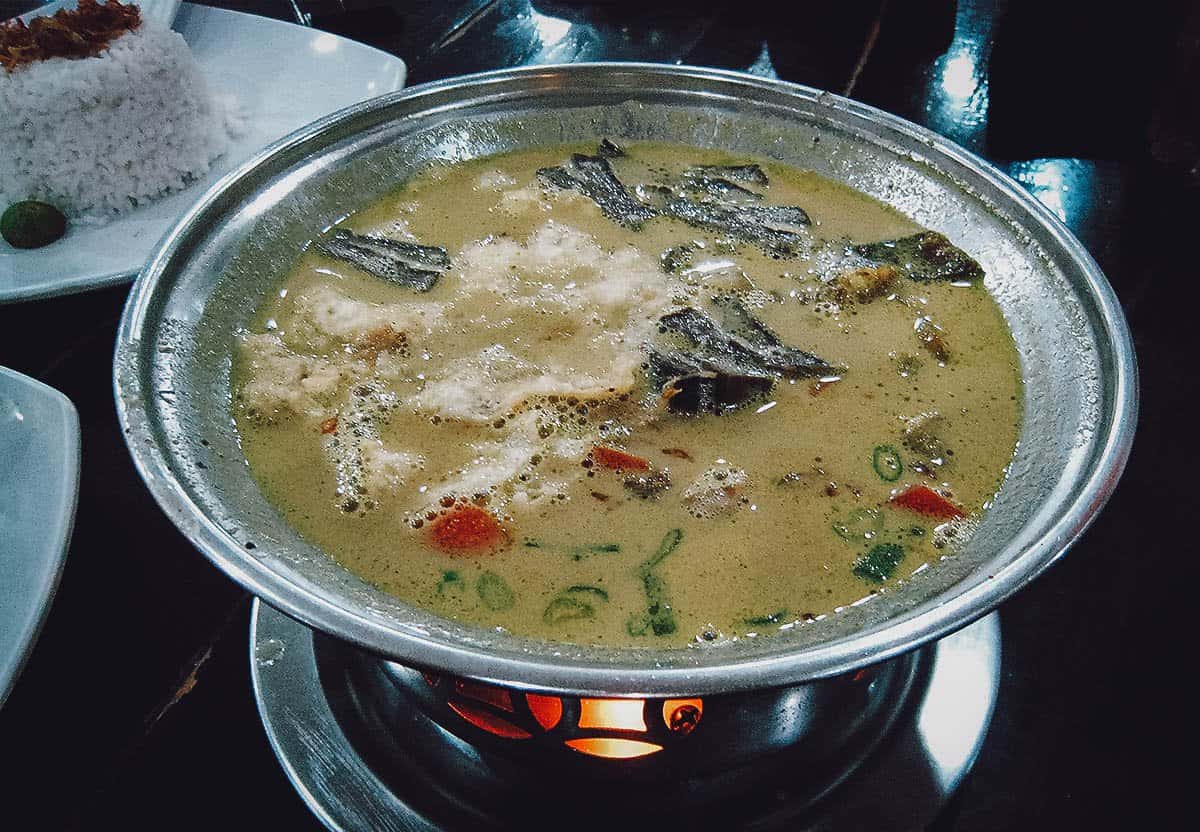 Soto Kediri is a type of chicken soup from Kediri Regency made with coconut milk. 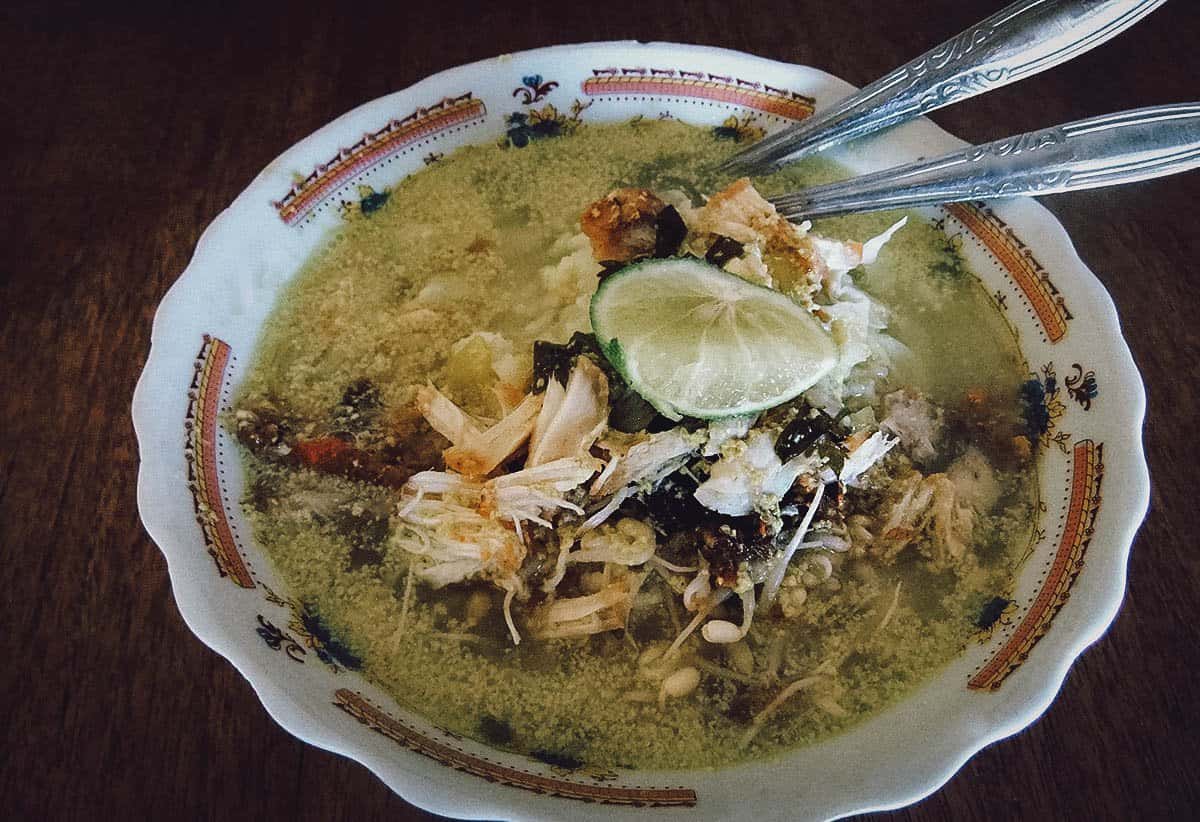 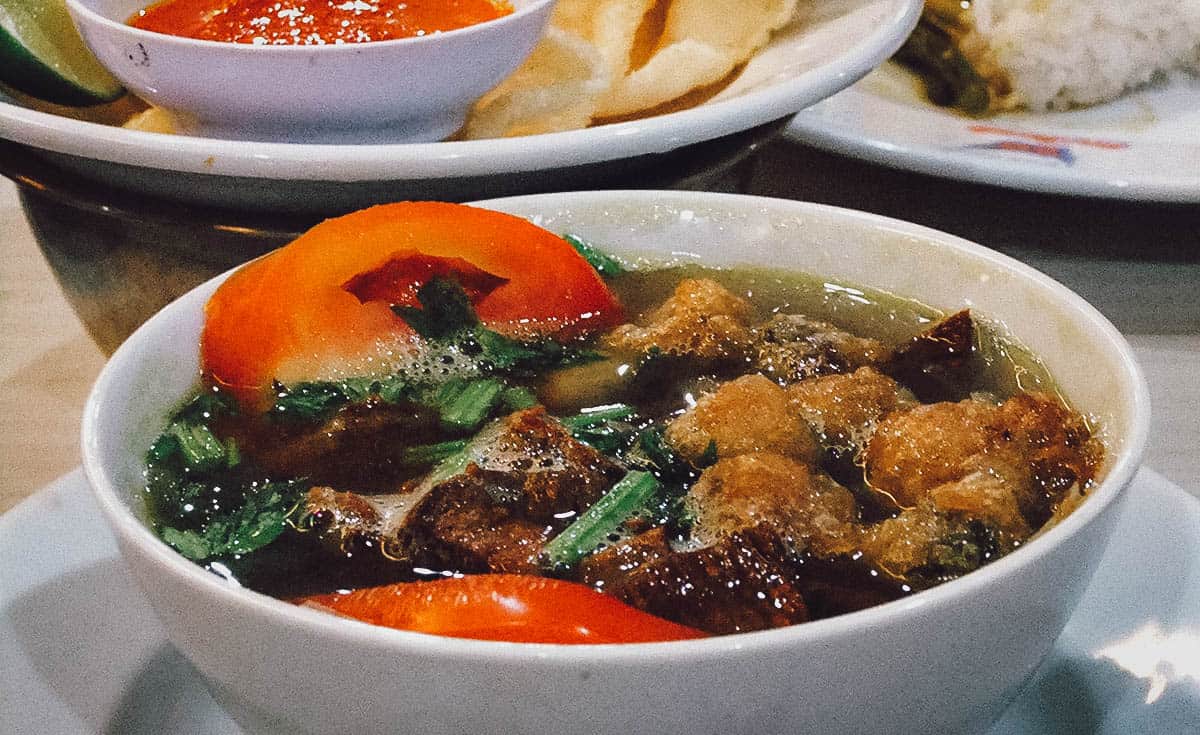 PHOTO: Midori, CC BY 3.0, via Wikimedia Commons / Cropped, processed in Photoshop and Lightroom 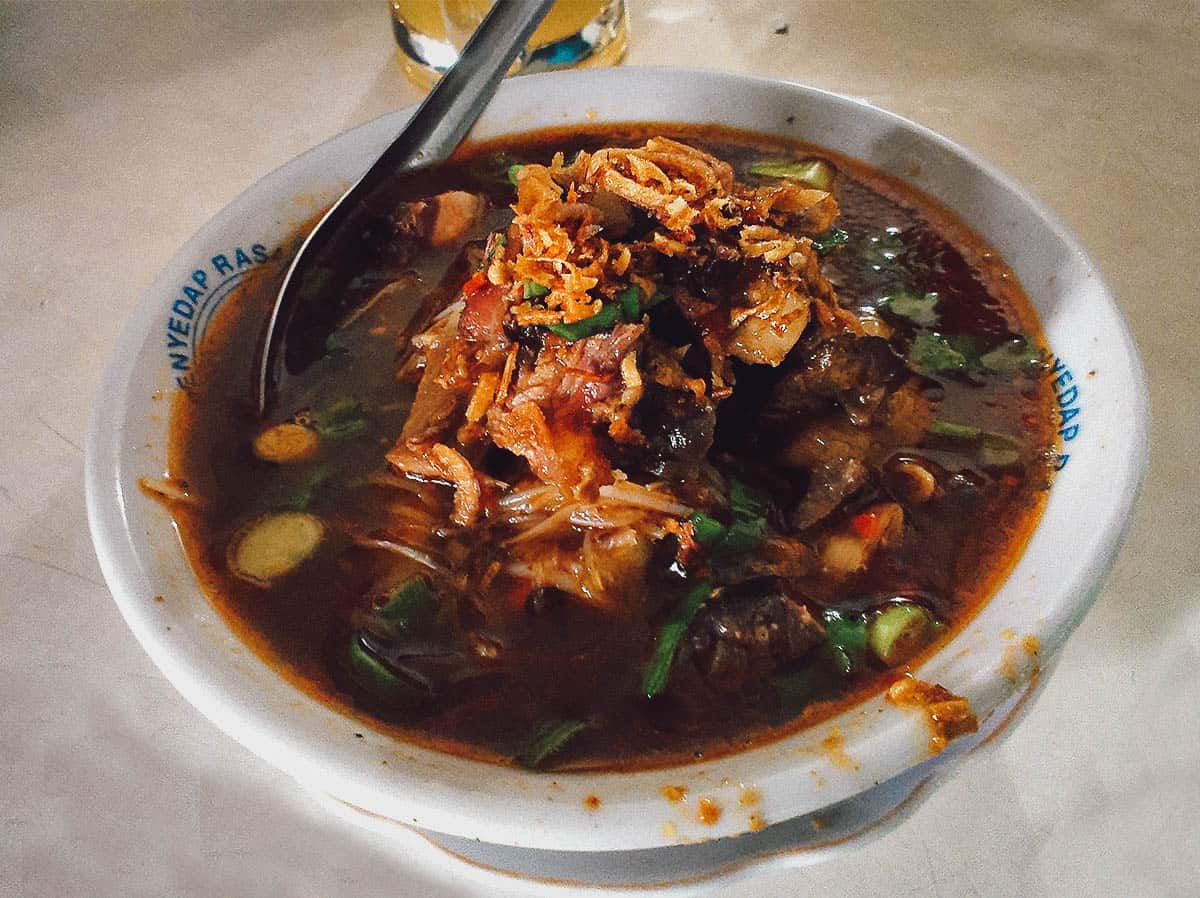 As described, soto can sometimes be a full meal and this overflowing bowl of Soto Semarang is the perfect example of that. It’s a type of chicken soup made with candlenut, potato fritters, and fried tempe, and eaten with a side of sate kerang (cockles), tripe, and quail eggs. 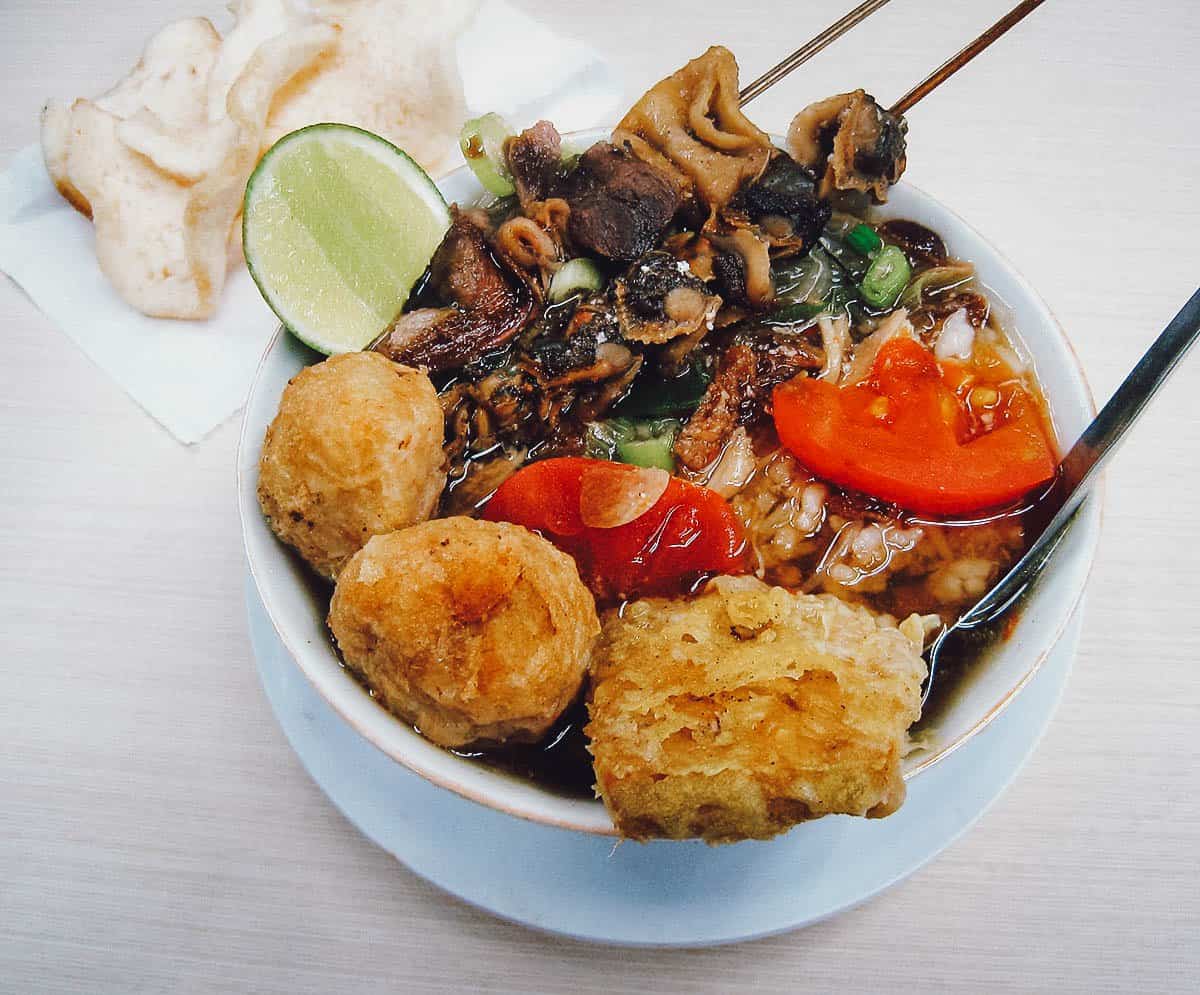 Simple and comforting soto ayam or chicken soup is perhaps the most famous type of soto. It’s the Indonesian equivalent of American chicken noodle soup. 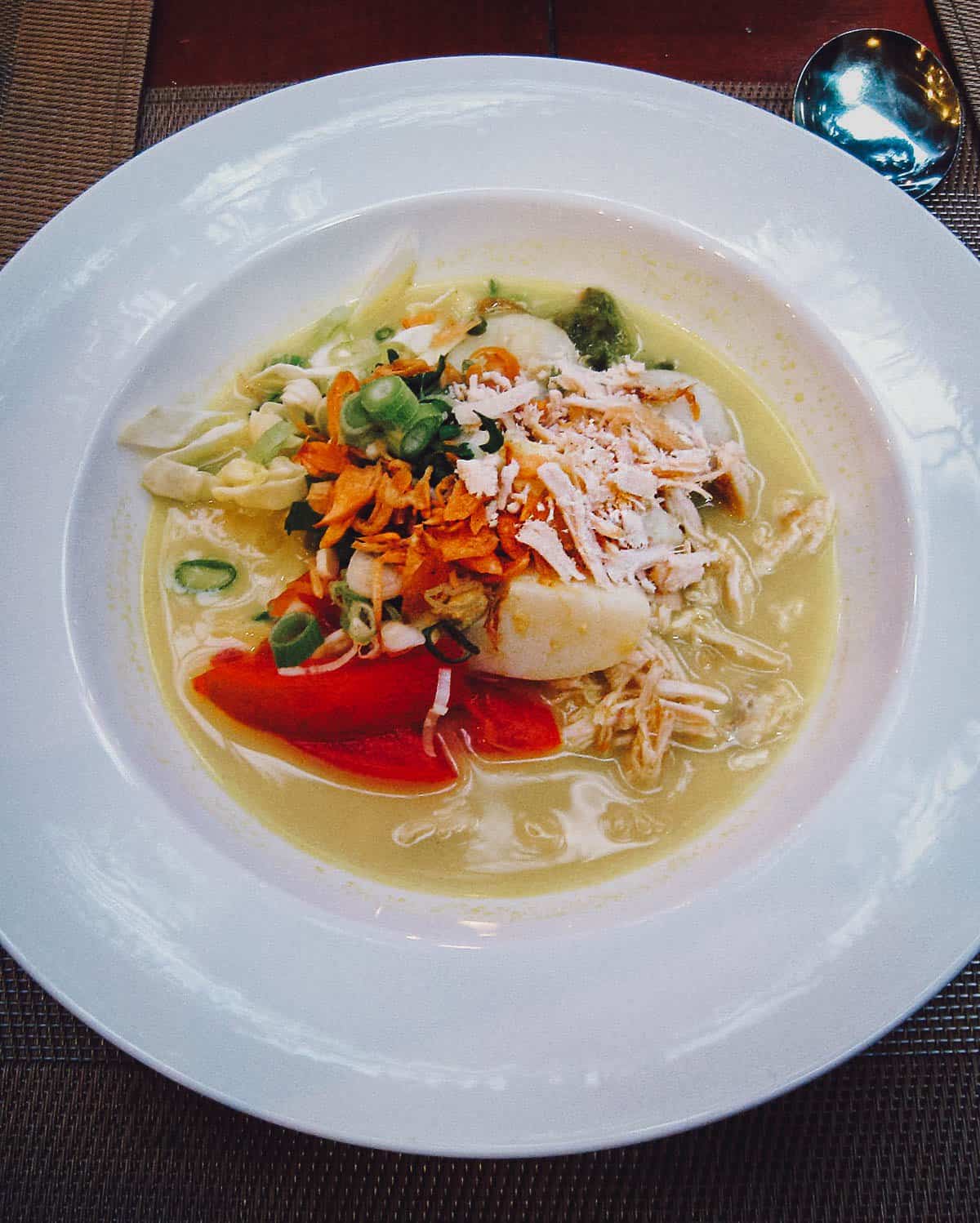 Indonesia is predominantly Muslim so pork is rarely used, except in non-Muslim-majority provinces like Bali. Pictured below is a bowl of soto babi or pork soup. 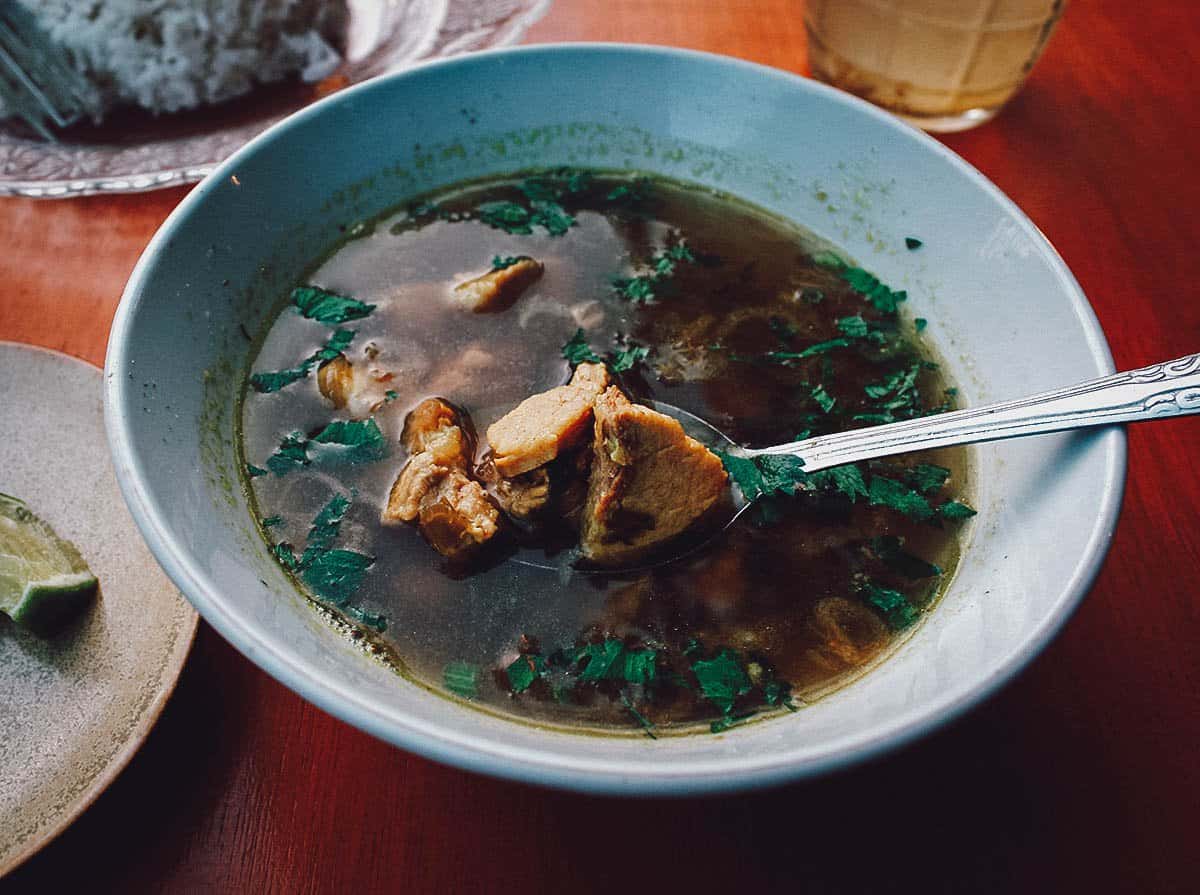 Popular in Java, soto ceker is a variation of soto ayam made with chicken feet. 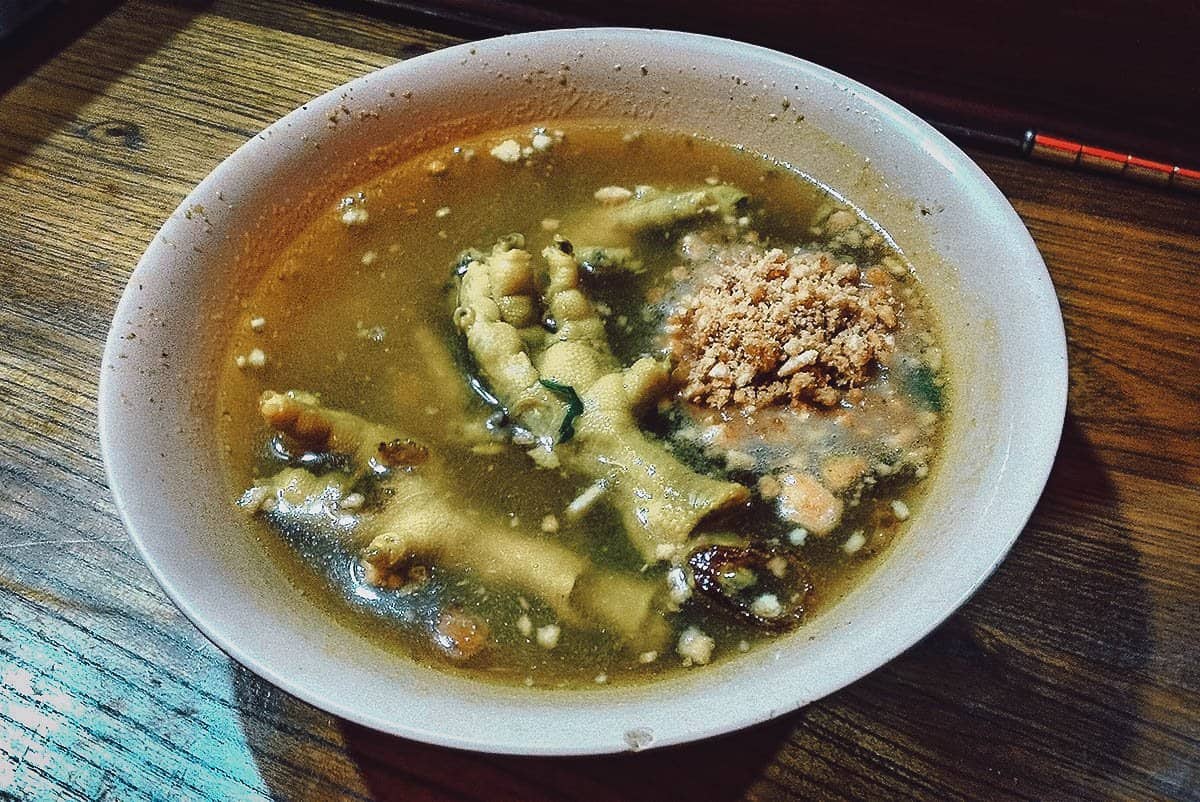 Soto kaki refers to soto made with animal feet. It’s a Betawi dish commonly eaten in Jakarta. This bowl of soto kaki kambing is made with goat feet. 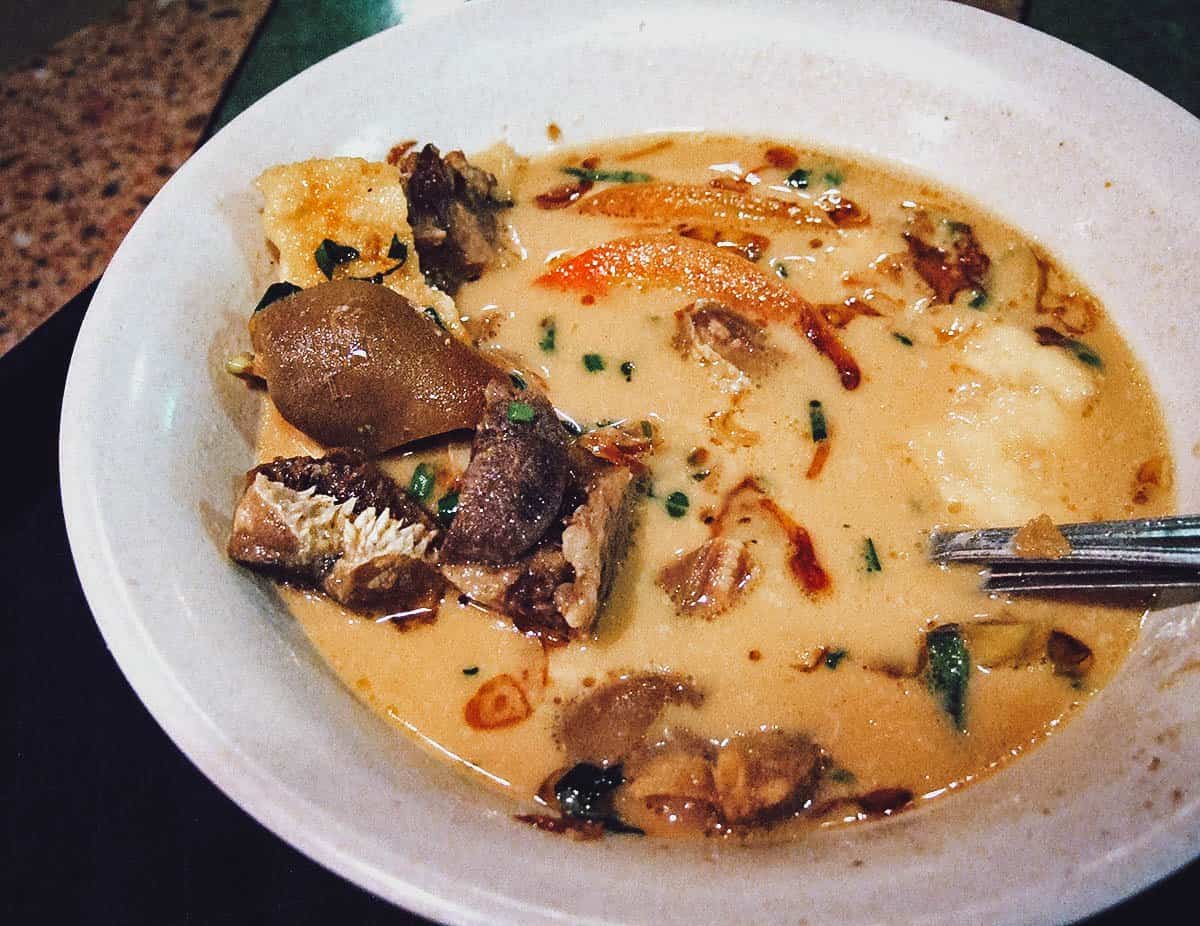 Soto kaki mencos is made with cow’s foot tendon. 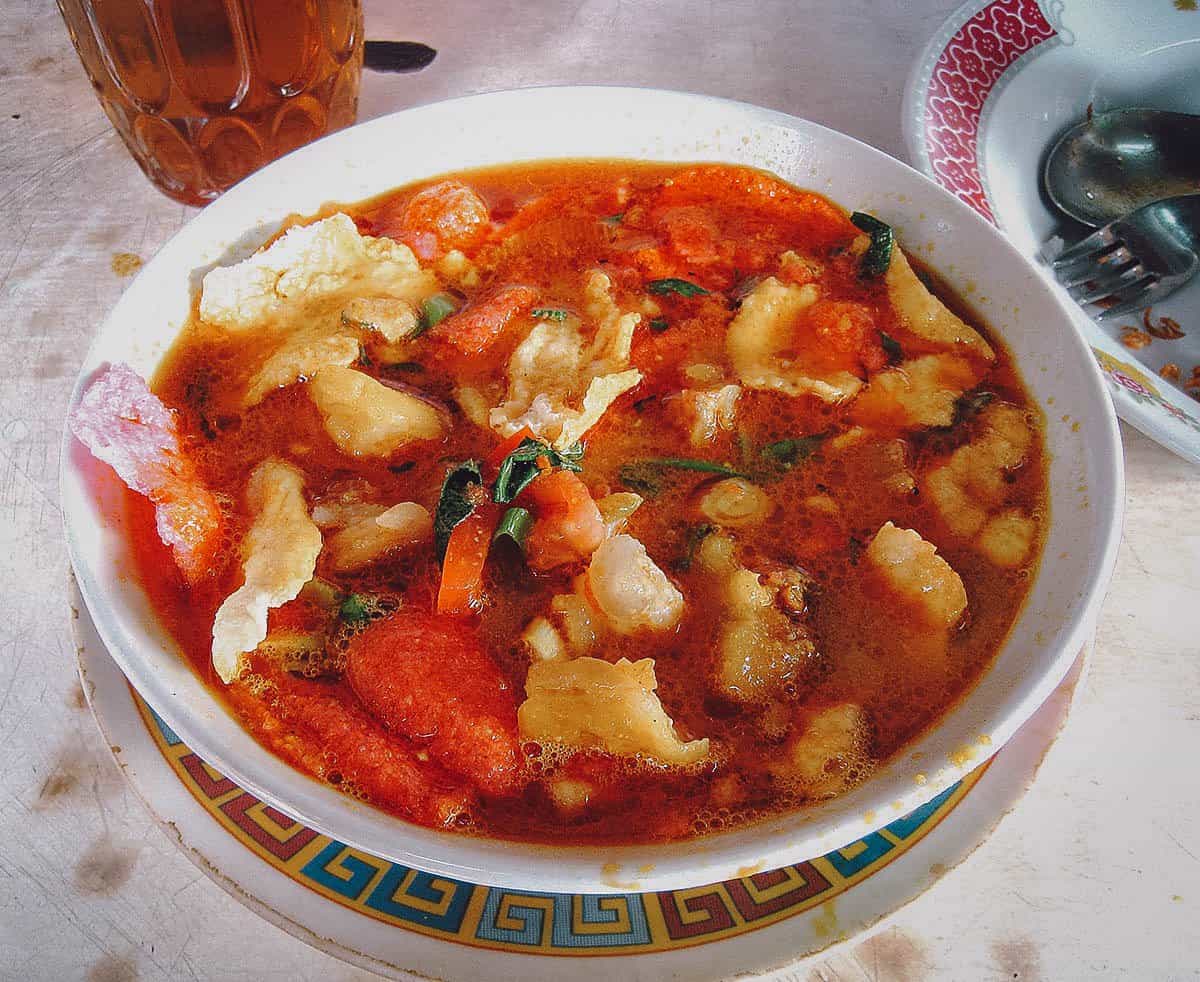 This bowl straddles both categories. Soto mie refers to soup made with mie noodles. Soto mie Bogor is a type of soto mie from Bogor City in West Java province. 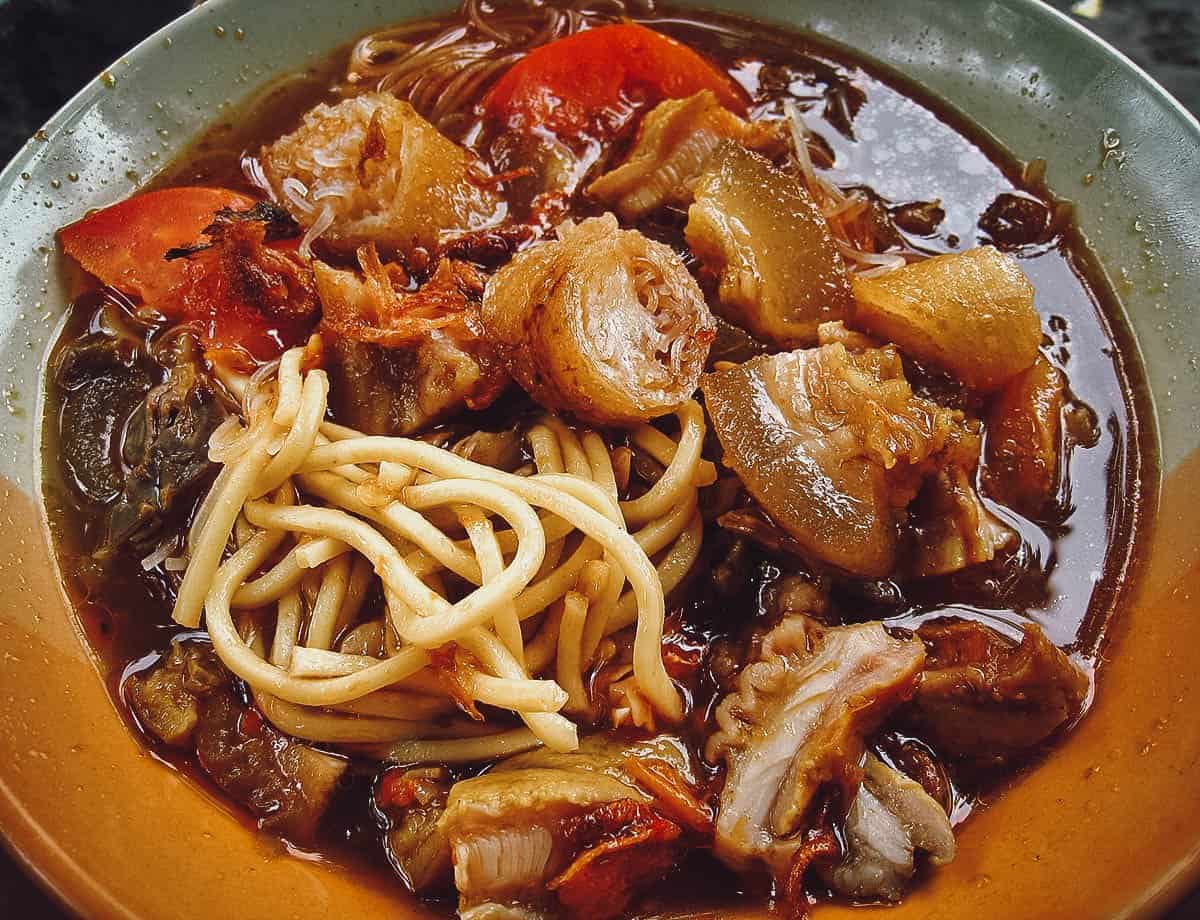 You’re probably wondering what sop looks like so pictured below is a delicious and hearty bowl of sop buntut from Dapur Dahapati in Bandung. Sop buntut is an oxtail soup in clear beef broth containing a mix of ingredients like potatoes, carrots, tomatoes, leeks, celery, and fried shallots. 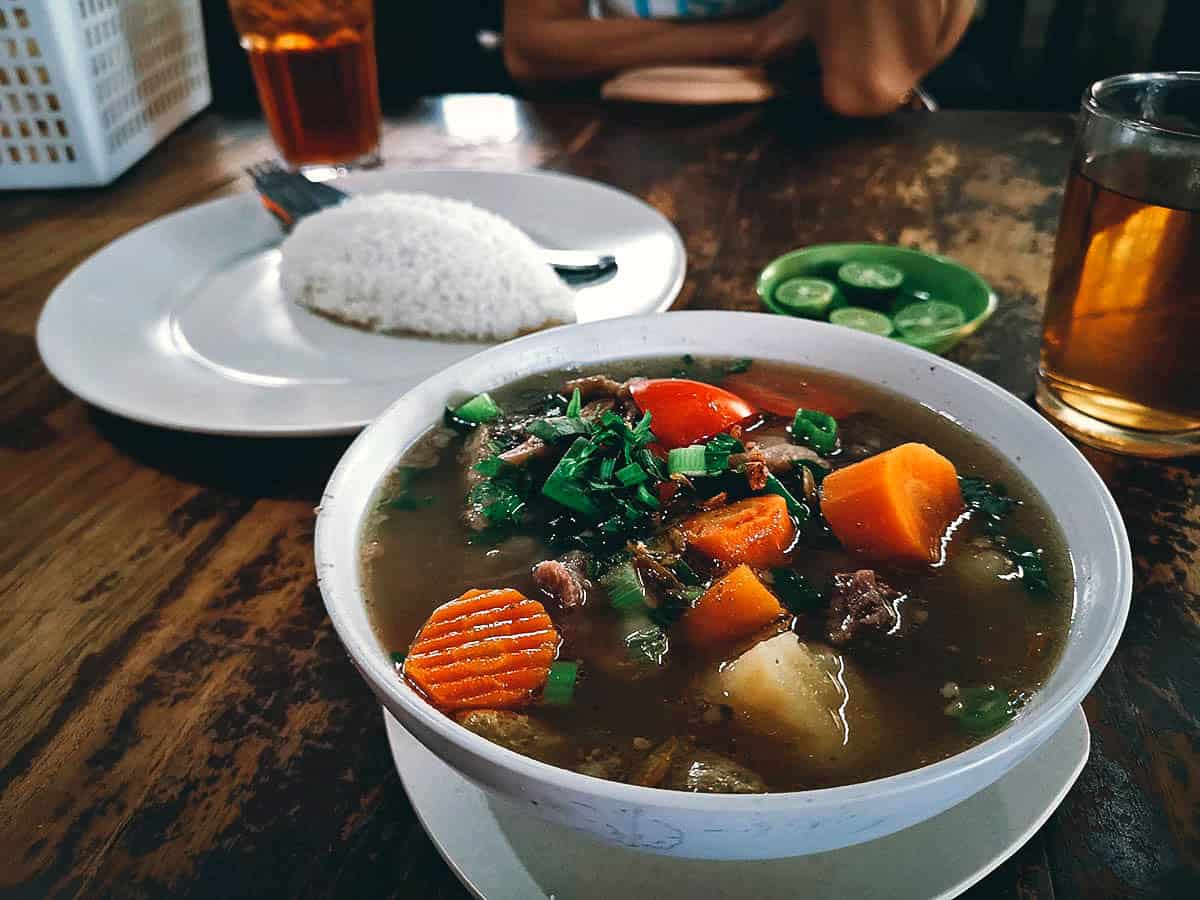 Nothing quite like a hefty hunk of oxtail and rice to kickstart your day. They sometimes grill the oxtail to give it a nice smokey flavor. 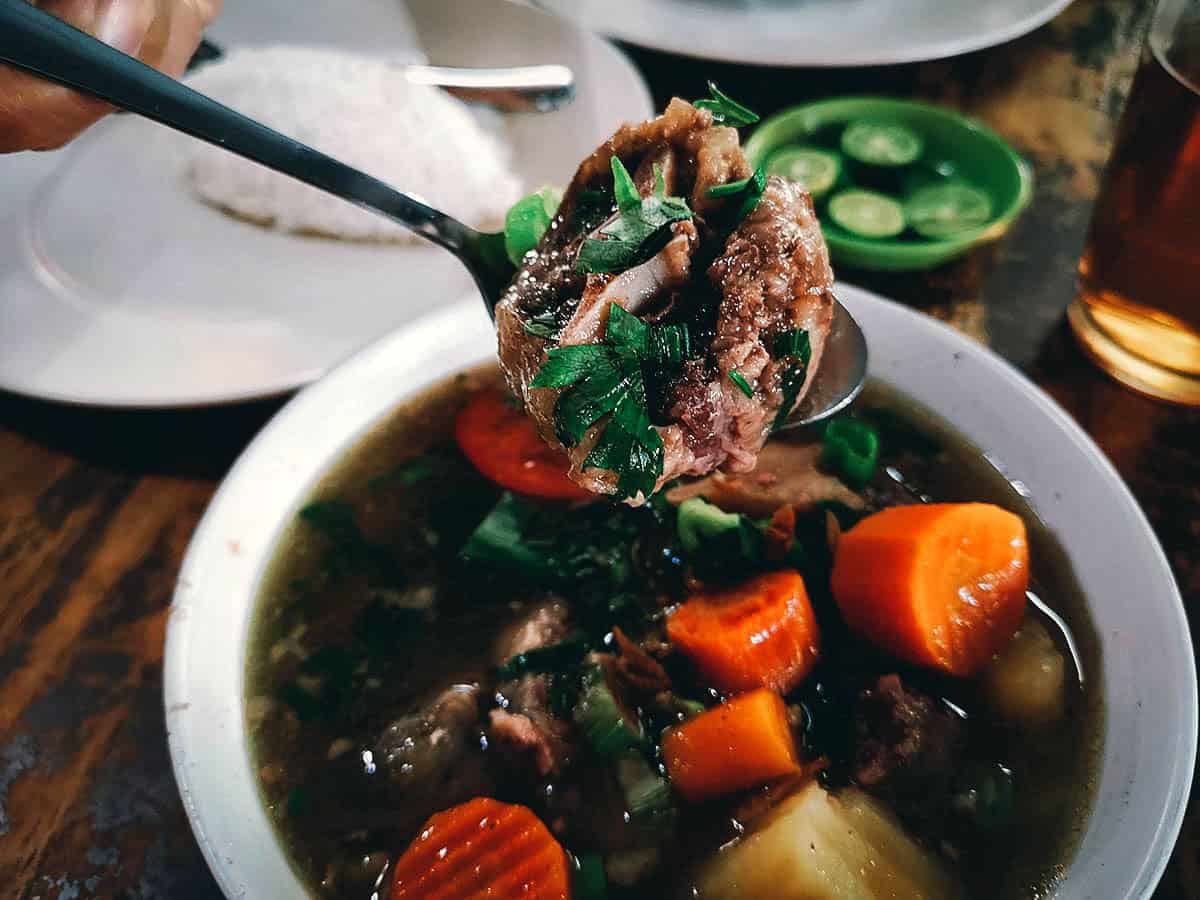 To be honest, I have my doubts whether the Wikipedia definition is true. I can’t find anything to support its veracity and the very same Wikipedia entry seems to contradict itself. It makes that distinction at the top of the page but jump to the history section and you’ll find claims that soto may have Chinese, Arab, and Indian Muslim influences. Wouldn’t that make it sop by their own definition?

Much is lost in the oral tradition of food, especially when it involves colonialism and migration. It opens up a fascinating discussion about food and national identity and made me realize things I may have innately felt but was never consciously aware of. Thanks to the ambiguity between soto and sop, I am now.

Hi, really impressive writing and thorough research. It is worth appearing in newspaper :). You are right when pointing out to the many variations of soto. Like any traditional recipes, soto will not be the same even from one vendor to the others. I'd like to comment about the difference between soto and soup.

Soto : less influenced by western (not foreign) style or ingredients or the western influence is kept minimum in soto. Historically from what I read, soto is a Chinese - Indonesian fusion food introduced by Chinese immigrants in Semarang, Central Java. Regional variations call for coconut milk, a signature of Southeast Asian origin. Soto features vegetables as garnish only and the emphasis is in the meat, vermicelli, meat, and broth. Rice can be added for a full meal.

Soup or sop: Meanwhile, soup was introduced by the Dutch colonists during Dutch occupation Era. A western cultural product and any sop will feature ingredients popular in western style soup such as potatoes, tomatoes, celery, carrots, cabbage, etc. Therefore, if you wonder why sop buntut is not called soto, it's because historically oxtail soup was invented by the British in the 18th century. Indonesians aptly call it sop because of the western origin. Moreover, the ingredients bear lots of influence from the west: potatoes and carrots to accompany the oxtail. Yet, the spices are clearly of Indonesian/Asian origin. You will not find soup mixed with coconut milk or added with vermicelli / noodle. Sop features vegetables as one of the main ingredients, and not as garnish. However, I am still confused with sop kaki lambung or goat foot soup as it is cooked with coconut milk.

Sayur : it puts heavy emphasis on vegetables. The main ingredients are vegetables so it's bizarre to add vermicelli or noodles in it. It may contain meat or egg but that's not necessary. E.g. Sayur asem or tamarind soup, sayur lodeh or vegetables in coconut milk broth.

This is just my personal observation but hope it helps shed some light.

Hi Javanese, thank you for this very insightful comment! I always enjoy reading comments like this from locals. I didn't realize it when I was eating them but vegetables seem to play a significant role in making the distinction between soto and sop. I'll pay more attention to that next time we're in Indonesia. Thanks again! :)