EDITOR’S NOTE: Traveleater Joseph Simborio is a bass guitarist and collector of chelo kebab memories. Here he shares his knowledge on the Thai bowl of deliciousness known as tom yum goong.

It’s been one of my yearly traditions to partake in some sort of feast during family reunions. This is the time when my extended family gets together and spends the whole day catching up and bonding over potluck food, essentially turning the host’s home into a busy restaurant.

After a successful Mexican-themed party the year prior where my salsa became a hit, I was tasked to hit the kitchen once more and prepare fried rice, particularly of the yang chow or Yangzhou chao fan variety since it was decided our theme was going to be Chinese cuisine this time around. 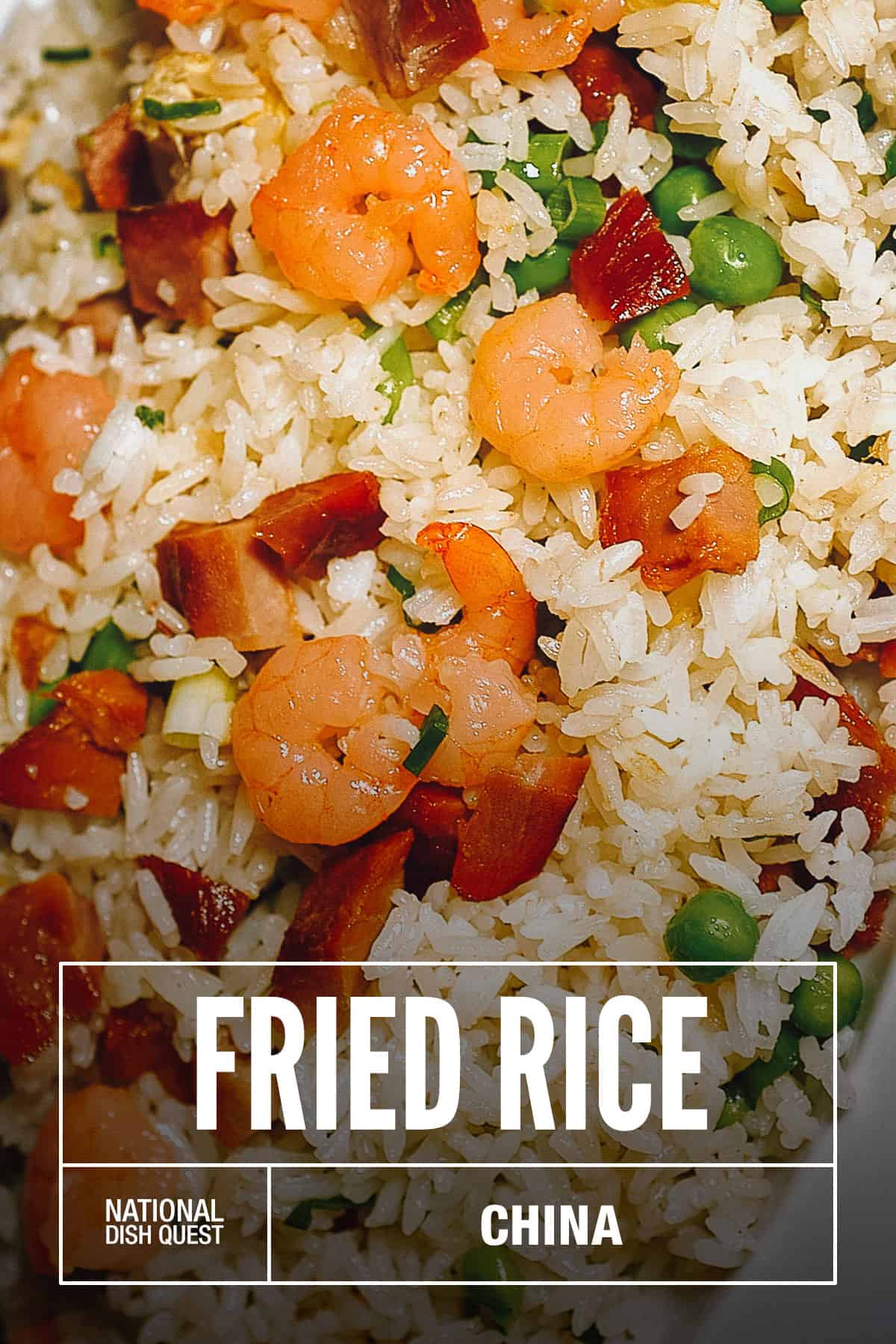 Photo by PerfectLinks via Pixabay

WHAT IS CHINESE FRIED RICE?

Also called chao fan, Chinese fried rice’s exact origins are lost to history. Its earliest recording was found during the Sui dynasty (589 – 618 CE) in the city of Yangzhou, though the stir-frying cooking method is known to have existed at a much earlier period. It wasn’t until the Ming dynasty (1368 – 1644 CE) that the technique became widely popular.

Fried rice is believed to have started as a means to deal with leftovers, specifically meat and vegetables from yesterday that have passed their prime but are still good to consume. The standard ingredients are generally shrimp, pork, and egg, which are stir-fried in chopped garlic and vegetables, and seasoned with soy sauce.

The dish may have evolved over the years and have spawned different varieties, but the basic elements remain the same. The great thing about Chinese fried rice is you can add more ingredients if you wish. My version is slightly different to give it a more distinct taste packed with flavor. 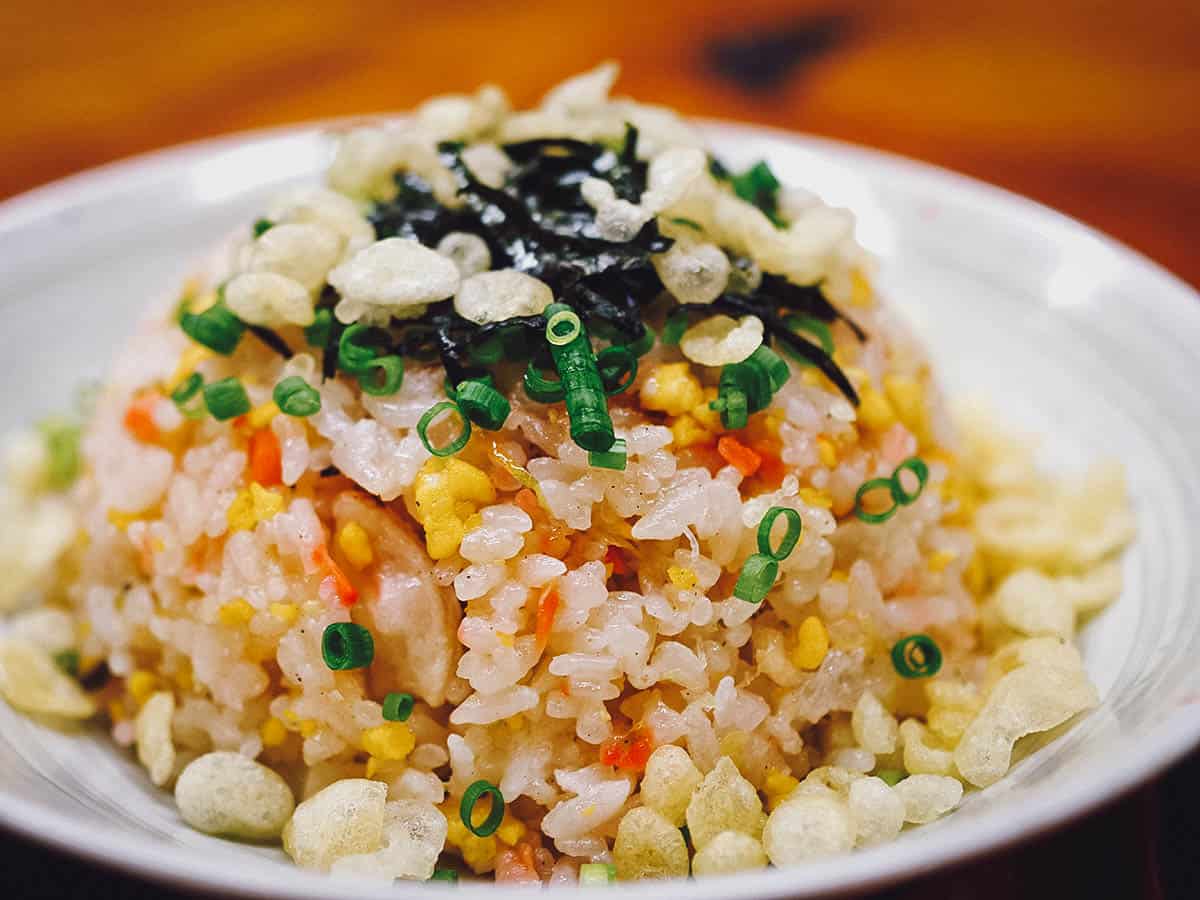 Photo by takedahrs via Pixabay

RICE THAT’S A MEAL IN ITSELF

Yang chow is an easy dish to prepare as long as you have the right ingredients. Everybody else in the family pitched in with different dim sum, grilled meats, and steamed buns to stay true to the theme. But the rice is a meal in itself with all the ingredients you’ve included to prepare the dish. Some even add squid, chicken, and fish to give it a more diverse flavor.

They say that Yang chow fried rice gets its distinct flavor from all the ingredients combined. If you don’t have char siu pork, the key ingredient here is the five spice powder. However, you must take it easy in adding this as it packs a strong flavor. You wouldn’t want to go overboard. 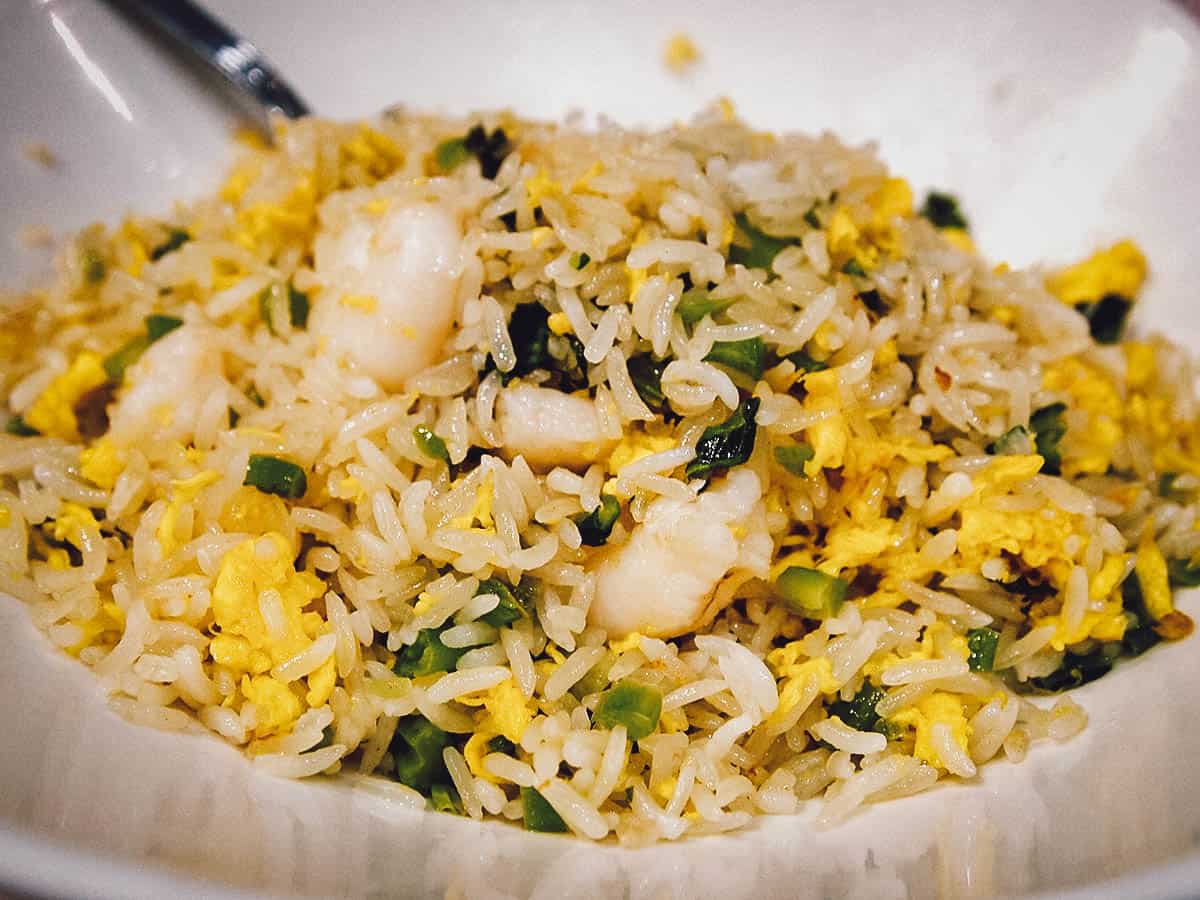 Photo by n23club via Pixabay

With its humble beginnings as a way to accommodate leftovers, Chinese fried rice has definitely reached a level of greatness where we can use a variety of premium ingredients and turn it into the star of your meal.

When lunch was served, it certainly did not disappoint. With a side of chili and tons of chatter, my family had their fill, and with all the unnecessary praises, I had mine, too.

A WORLD OF FRIED RICE

Fried rice may be a Chinese national dish, but we all know it isn’t just available in China. Thanks to the Chinese diaspora, you can now have fried rice pretty much anywhere in the world, with many cultures adapting and integrating the dish into their respective cuisines and making it their own. Here are a few examples.

Personally, this is one of my favorite types of fried rice. Japanese fried rice or chahan is a Chinese-derived fried rice that’s been suited to Japanese tastes, most notably with the use of sticky short-grain rice instead of drier long-grain. Japanese ingredients like bonito flakes, shiso, and nori may also be used to flavor and garnish the rice. 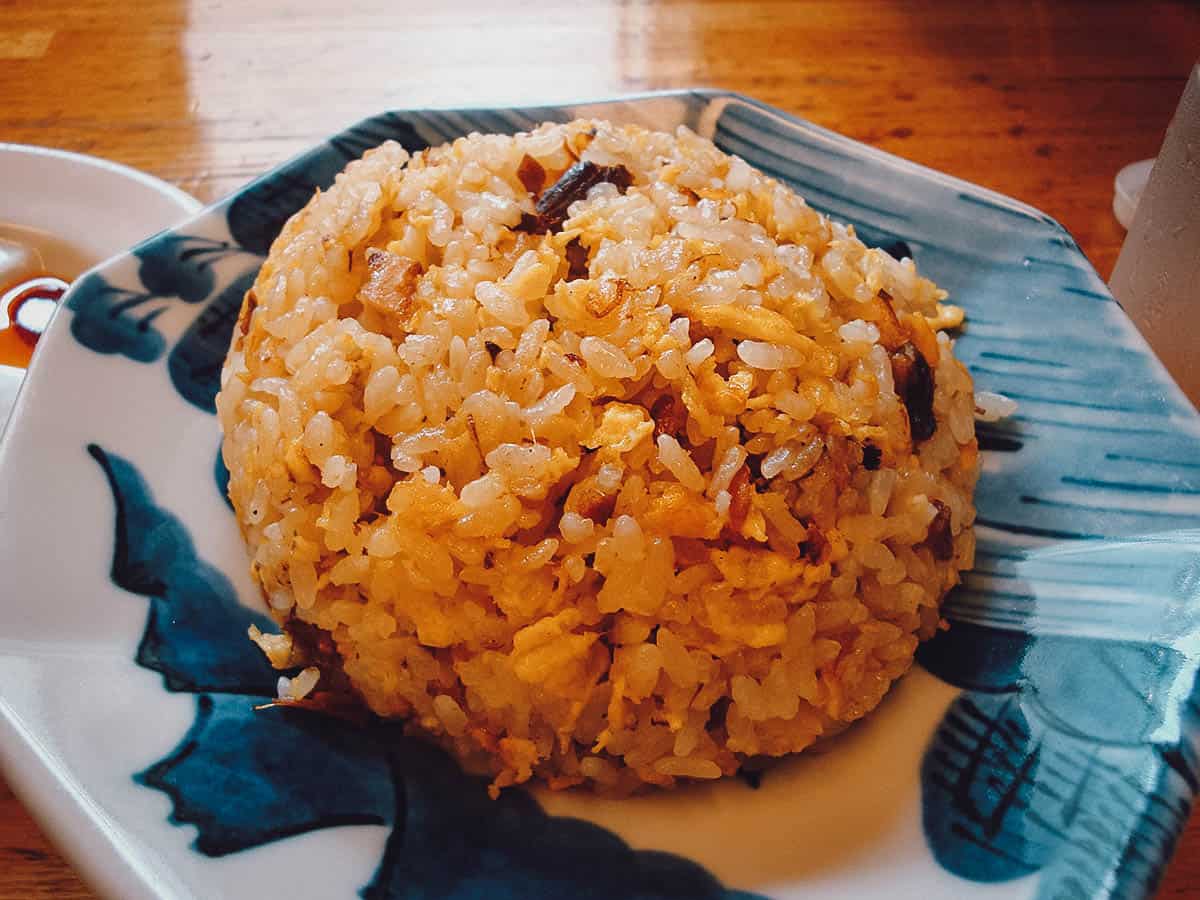 “Chahan” by David Pursehouse, used under CC BY 2.0 / Processed in Photoshop and Lightroom

Kimchi fried rice or kimchi-bokkeum-bap is made by stir-frying cooked rice with kimchi and other ingredients in vegetable or sesame oil. It’s typically made with leftover rice and over-ripened kimchi for fullness of flavor. A nuclear shade of orange, the fried rice is hot and spicy and often served with a fried egg and thinly shredded gim or seaweed. 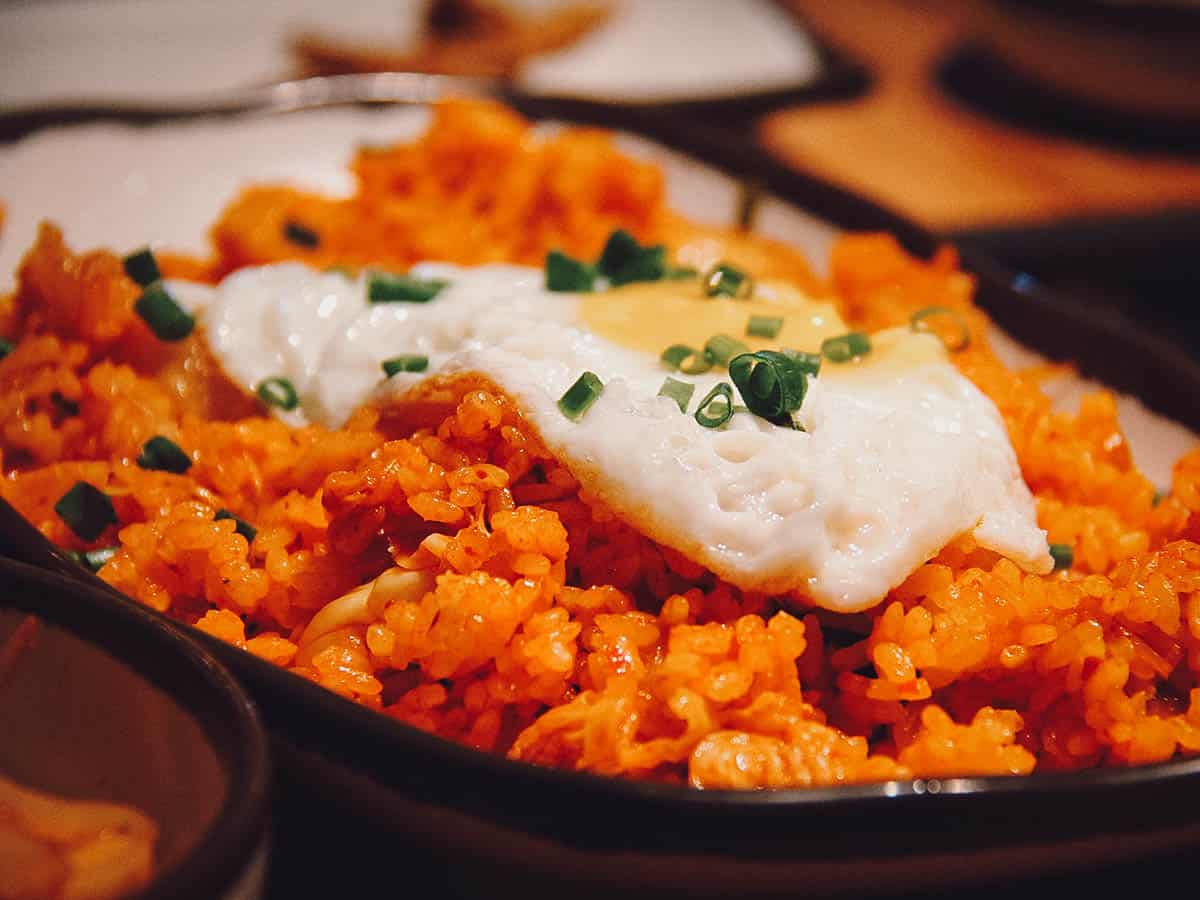 Photo by sharonang via Pixabay

I adore Thai food but I have limited experience with its fried rice. This is probably because I like to pair my robustly flavored Thai curries with a more neutral cup of steamed white rice.

In any case, Thai fried rice is said to be starkly different in flavor to Chinese fried rice because of its use of jasmine long-grain, which has an aroma reminiscent of pandan. Its most essential component is prik nam pla which is a condiment of diced chilis and chopped garlic in Thai fish sauce. Thai fried rice is typical of central Thai cuisine and is commonly made with meat (chicken, shrimp, or crab), egg, onion, and garlic, and served with slices of cucumber. 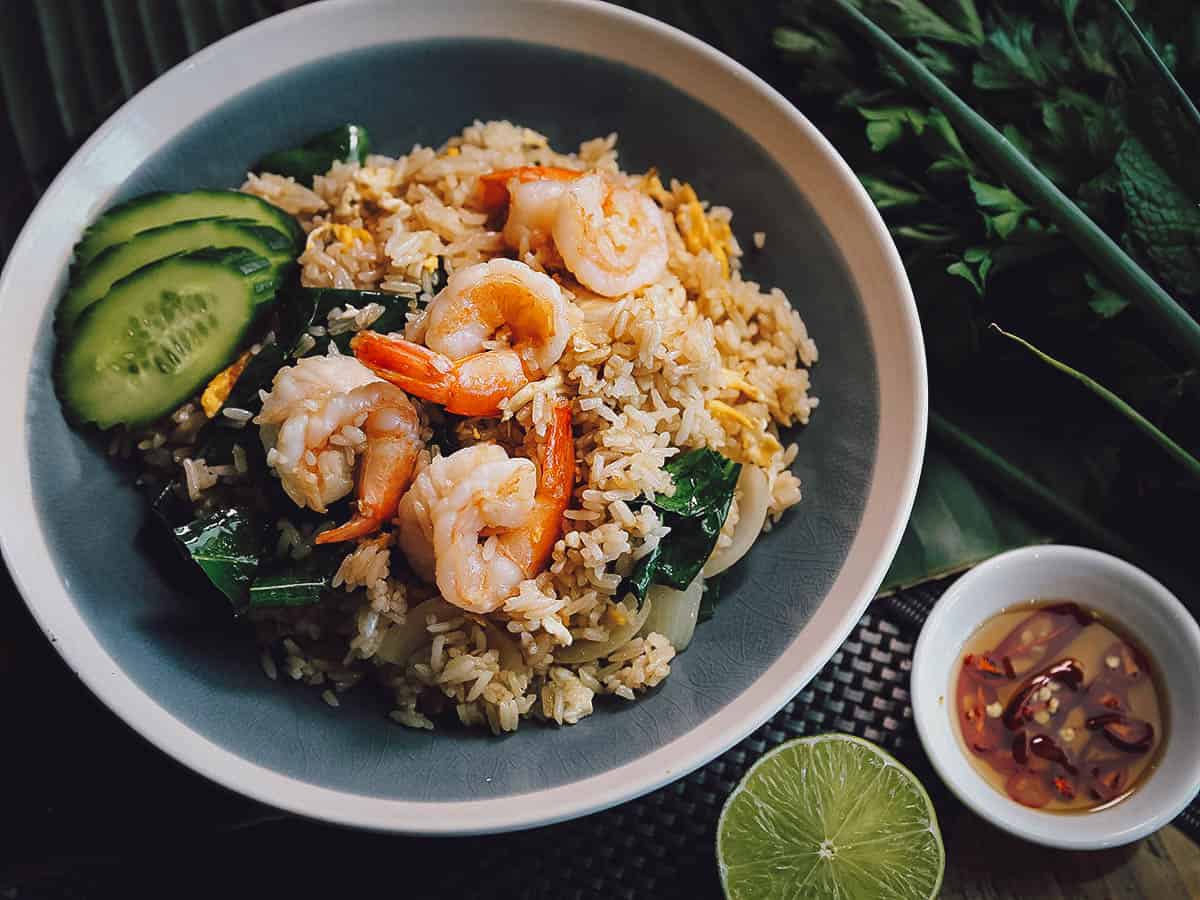 Photo by Huahom via Pixabay

Pictured below is an enviable mound of Thai fried rice mixed with green curry paste. 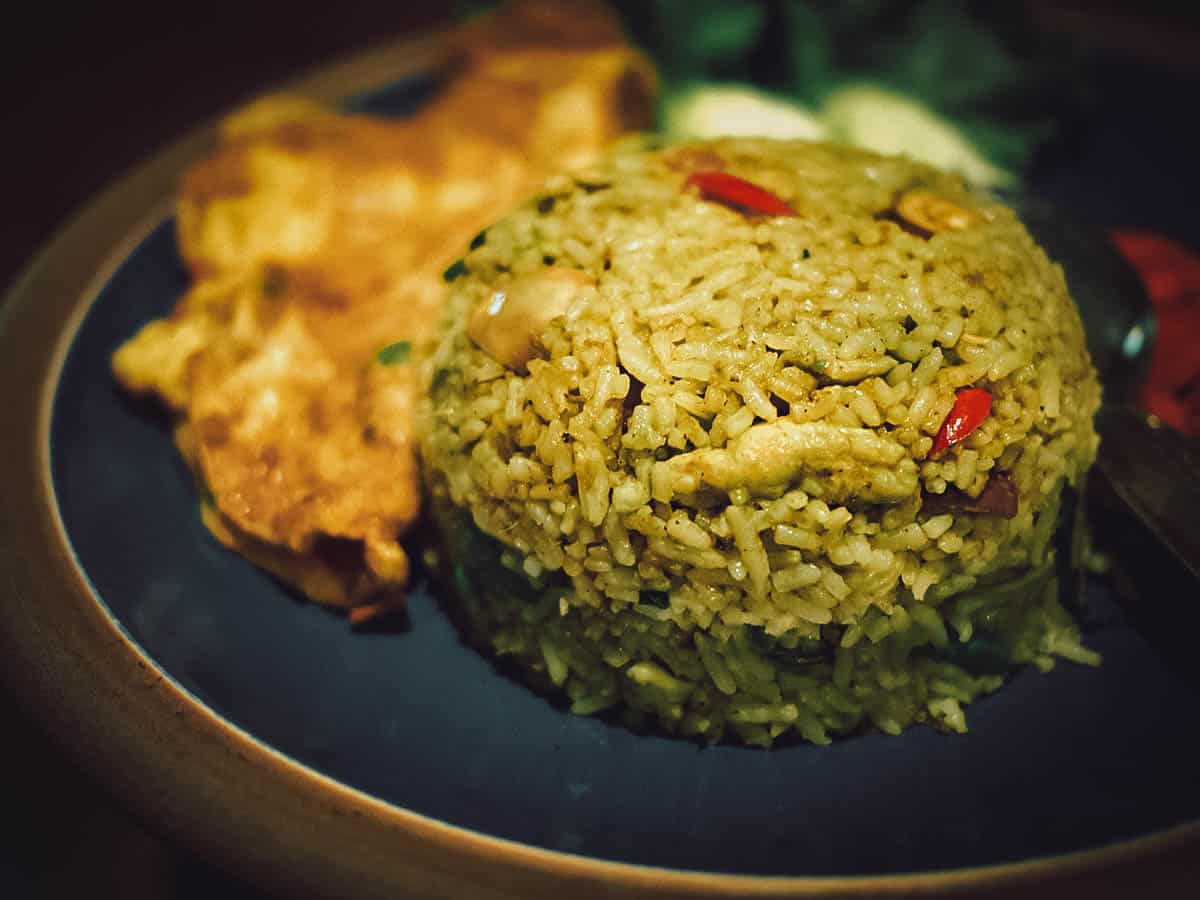 Fried rice has become so entrenched in Indonesian cuisine that it’s become a national dish. Nasi goreng is an Indonesian fried rice made with kecap manis, a local type of sweetened aromatic soy sauce. This is what gives the rice its patent dark brown color.

Like many Indonesian dishes, it can be served with any number of side dishes like fried chicken, satay, egg, and vegetables, along with a slew of condiments like sambal, fried shallots, and kerupuk. The term nasi goreng literally means “fried rice”. 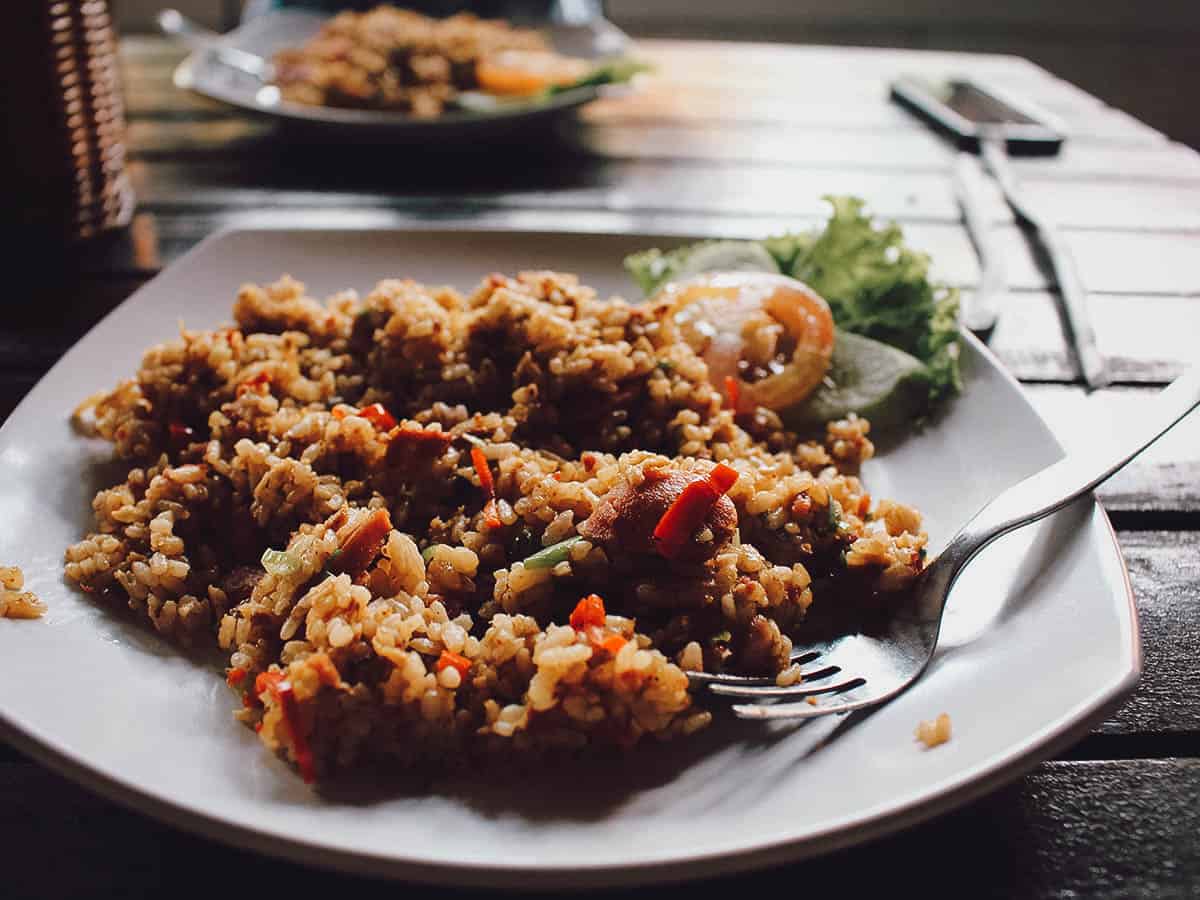 Photo by Fuzz via Pixabay

We eat fried rice often in our native Philippines, usually at breakfast. Sinangag or garlic fried rice is pre-cooked rice stir-fried with garlic. It can be enjoyed at any time of the day, though it’s most commonly eaten in the morning as part of a family of Filipino breakfast dishes called silog. 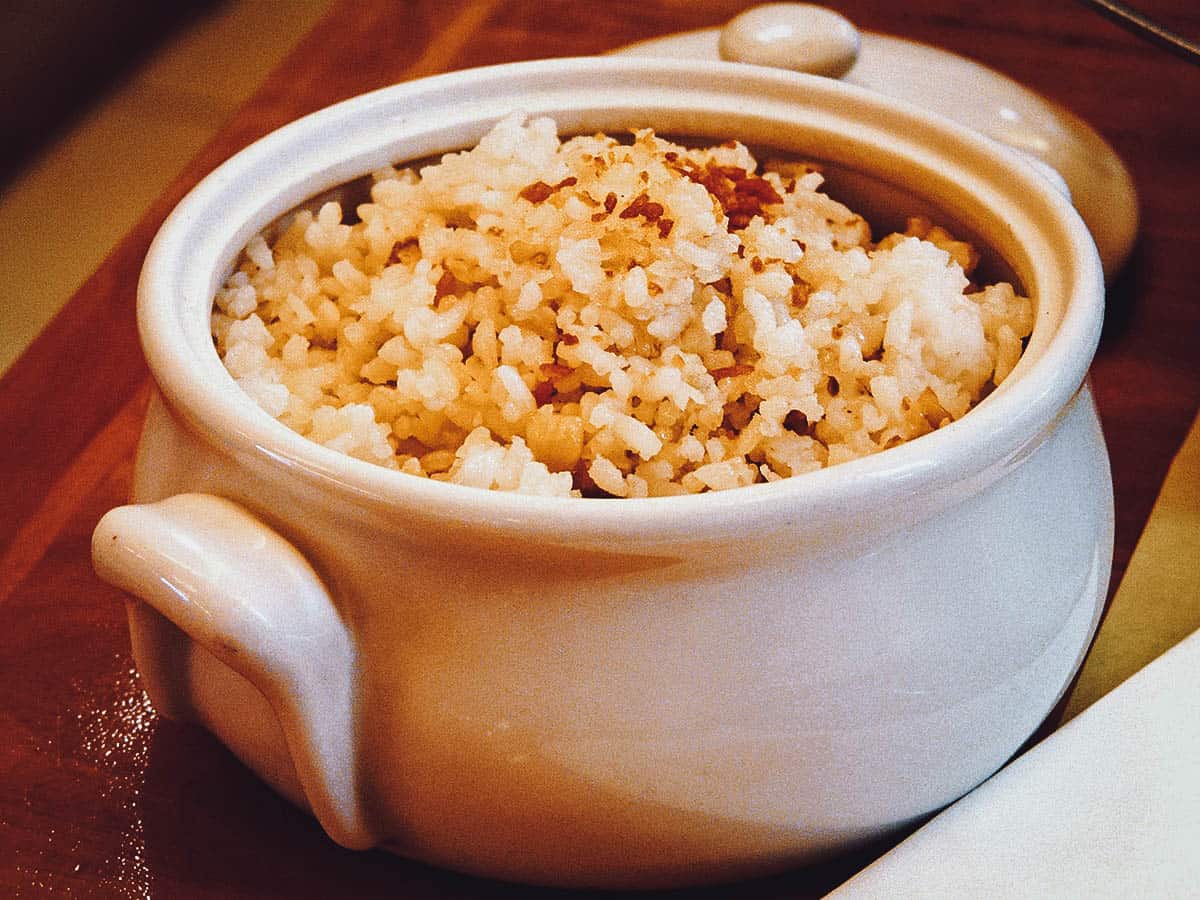 Photo by sharonang via Pixabay

I was in Sri Lanka in 2018 but I don’t recall trying their version of fried rice. In any case, I read that their fried rice is similar to Chinese or Indonesian versions, except they’re made with basmati rice and Sri Lankan spices. 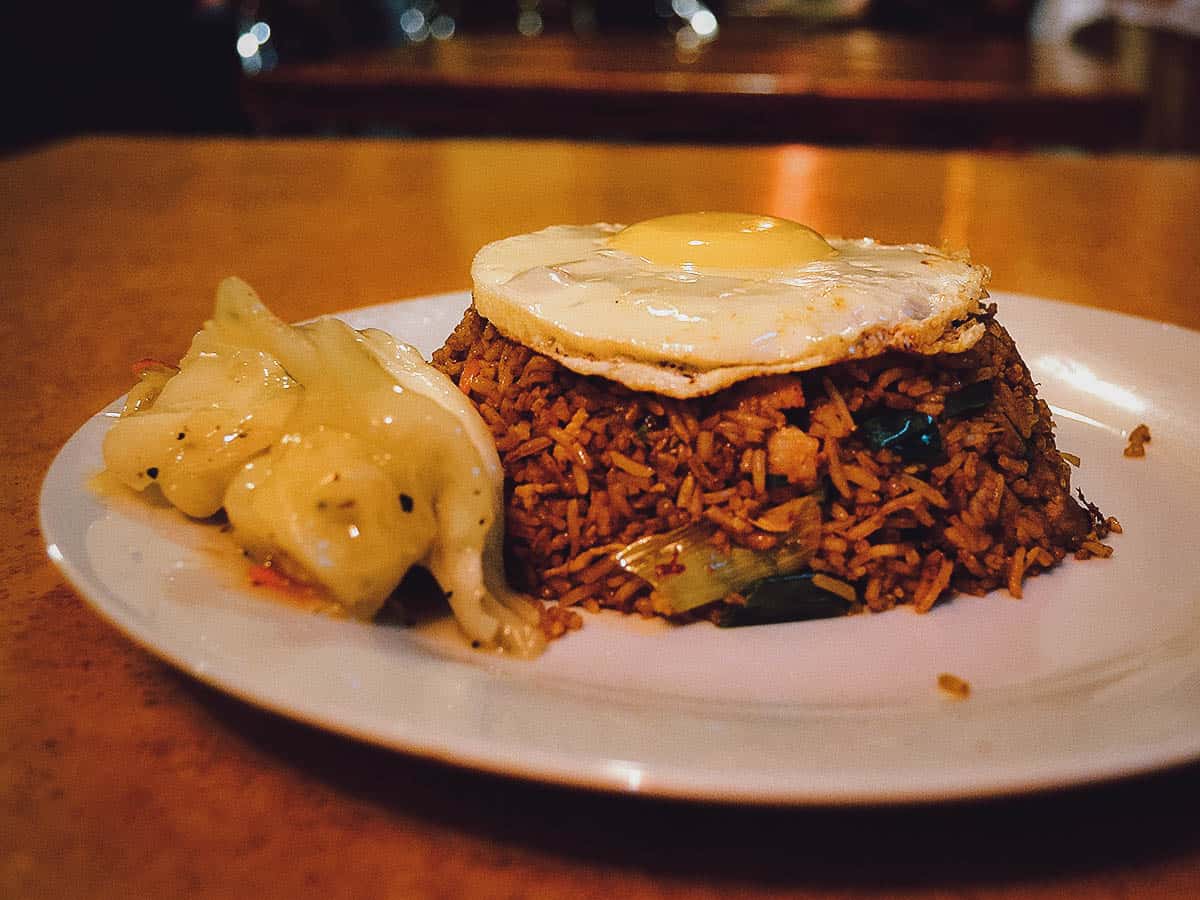 I haven’t been to Hawaii but they have a version of fried rice typically made with egg, vegetables, and you guessed it – Spam. 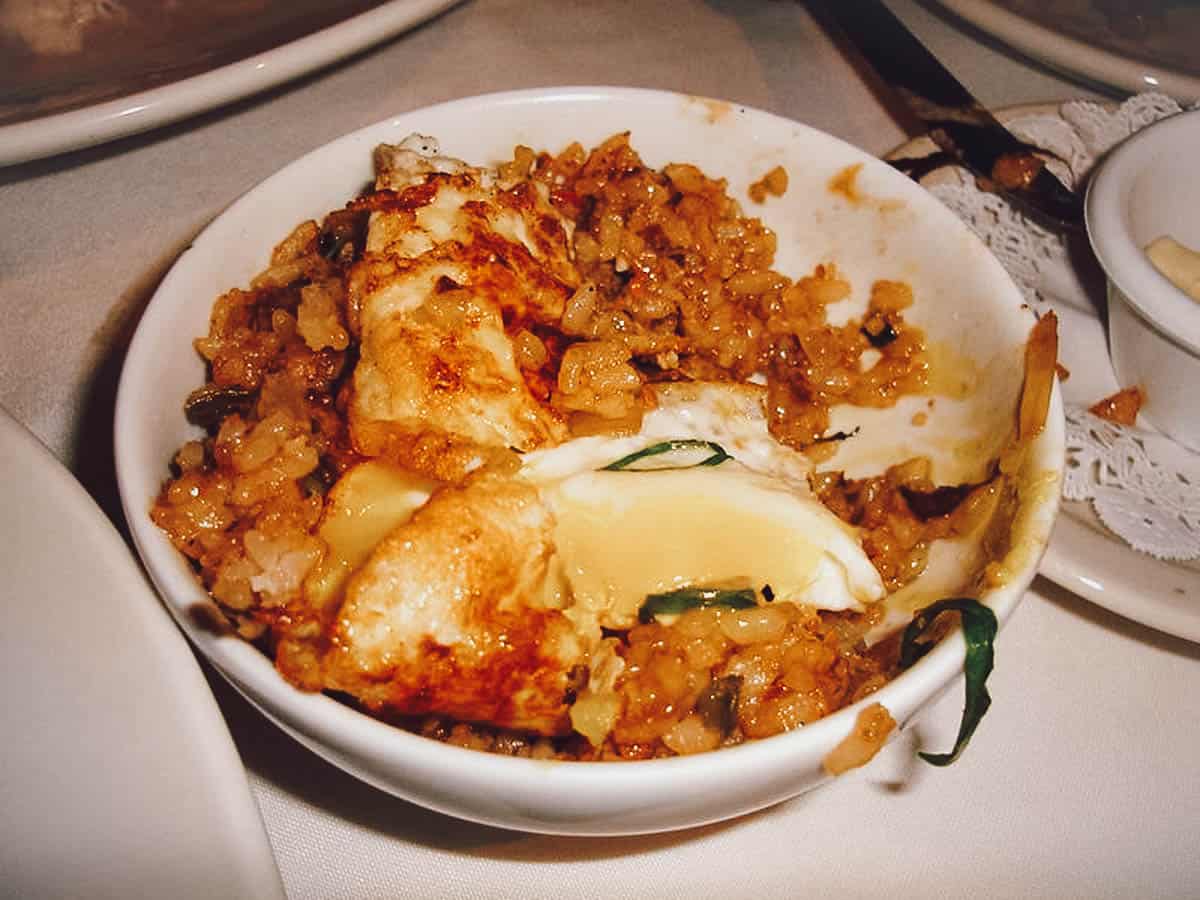 Cuban fried rice or arroz frito is typically made with pork, shrimp, chicken, egg, and vegetables. Fancier versions may include lechon (suckling pig), lobster tail, or crab. Arroz frito was popularized by Chinese immigrants who were brought in as contract workers in the mid to late 19th century. Many stayed after their contracts expired and created one of the oldest and largest Chinatowns in Latin America. 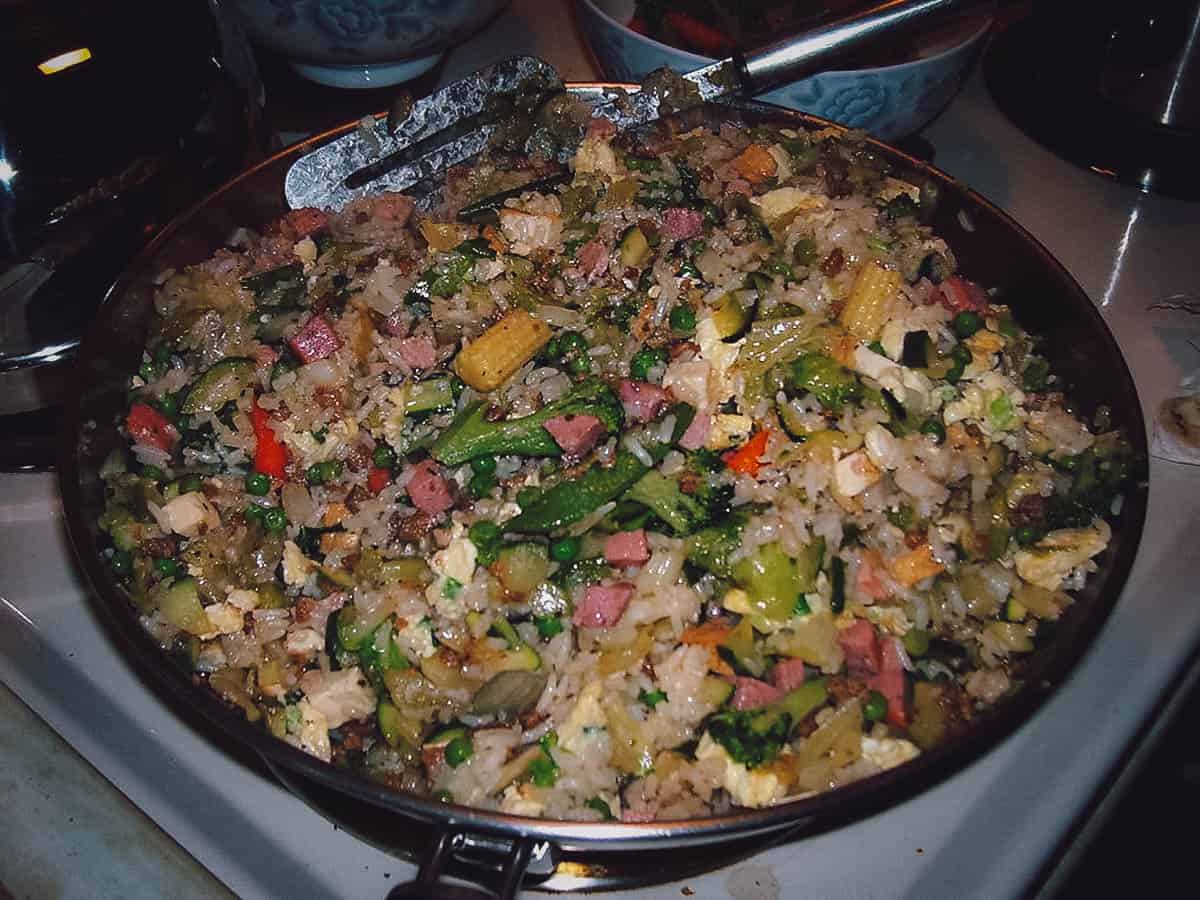 Arroz chaufa is the name for Chinese fried rice in Peru. It’s a chifa-style dish which is a fusion of Cantonese and Peruvian cuisine, created by an influx of Chinese immigrants to Peru from the southern province of Guangdong in the late 19th and early 20th centuries.

According to Wikipedia, the most common types of arroz chaufa are made with typical Chinese ingredients though more exotic versions made with alligator and lizard meat do exist. 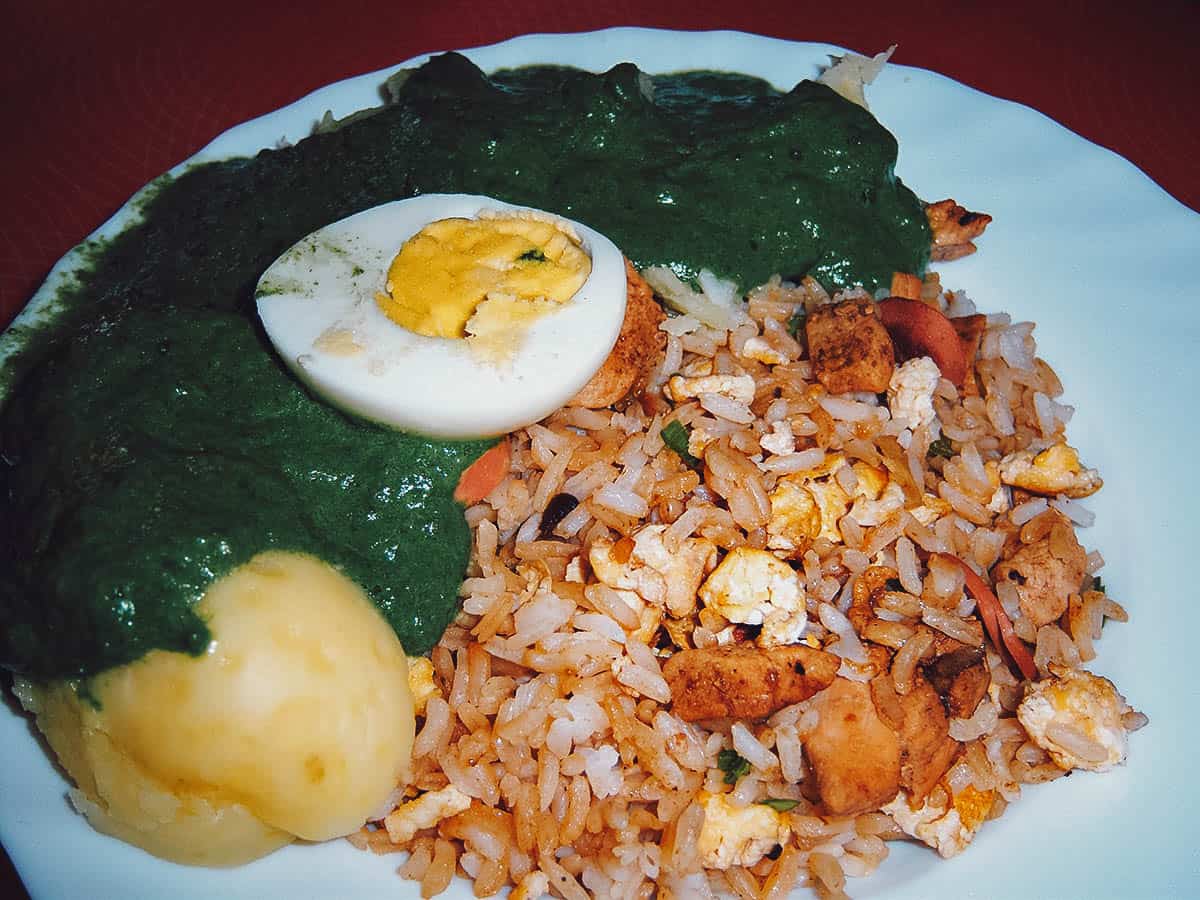 China has been the source of countless innovations and contributions to the modern world. Many people don’t realize it but a lot of the conveniences we enjoy today were invented by the Chinese. In fact, China is responsible for four great inventions – papermaking, the compass, printing, and gunpowder. In the realm of food, restaurant menus, soy sauce, stir-frying, tea bags, and tea pots all have their roots in China.

Fried rice may have found its way to other parts of the world, but most if not all can still be traced back to the Sui Dynasty in Yangzhou. Like every Filipino, I’ve been eating sinangag my whole life but never did I think our beloved garlic rice had its roots in China.

Like every other fried rice dish in the world it seems, it does.

That looks like proper Chinese-fashion fried rice that has to be made with cooked rice. Preferably lengthy grain white rice that became washed earlier than cooking.

Love all these different countries versions of fried rice! You know they all need very hi-heat to taste great.

But most of your viewers don't have a powerful wok stove like those restaurants stoves. Wouldn't it be great if they had the power of Wok Hei?