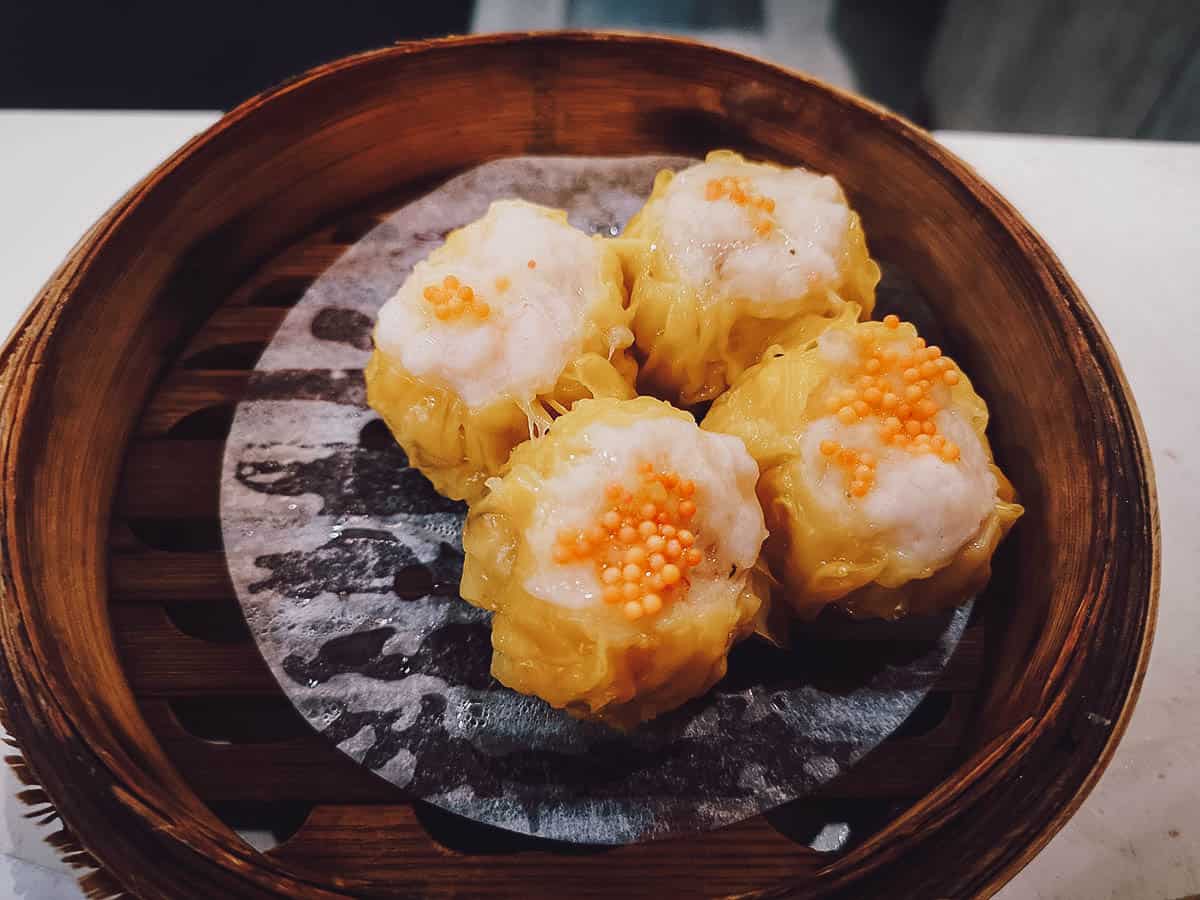 I love small or bite-sized servings of food. They offer variety, so instead of having just one big portion of something like steak, I can enjoy several dishes with different flavors and textures in one meal. This is why sushi, dim sum, and tapas are among my favorite foods in the world.

Dim sum for me, was about more than just the food. It was about the experience – the experience of enjoying these tasty Chinese morsels for brunch on a Sunday with friends, many of whom I hadn’t seen in a while. We’d catch up, laugh, talk about the old times over steaming bamboo basktes of siu mai and har gow. It wasn’t something we did often which made it all the more special.

I recently spent a couple of days in Hong Kong so I did some research to find the best yum cha experiences in the city. I came across an insightful article that talked about the evolving world of dim sum and its (gasp) possible demise. 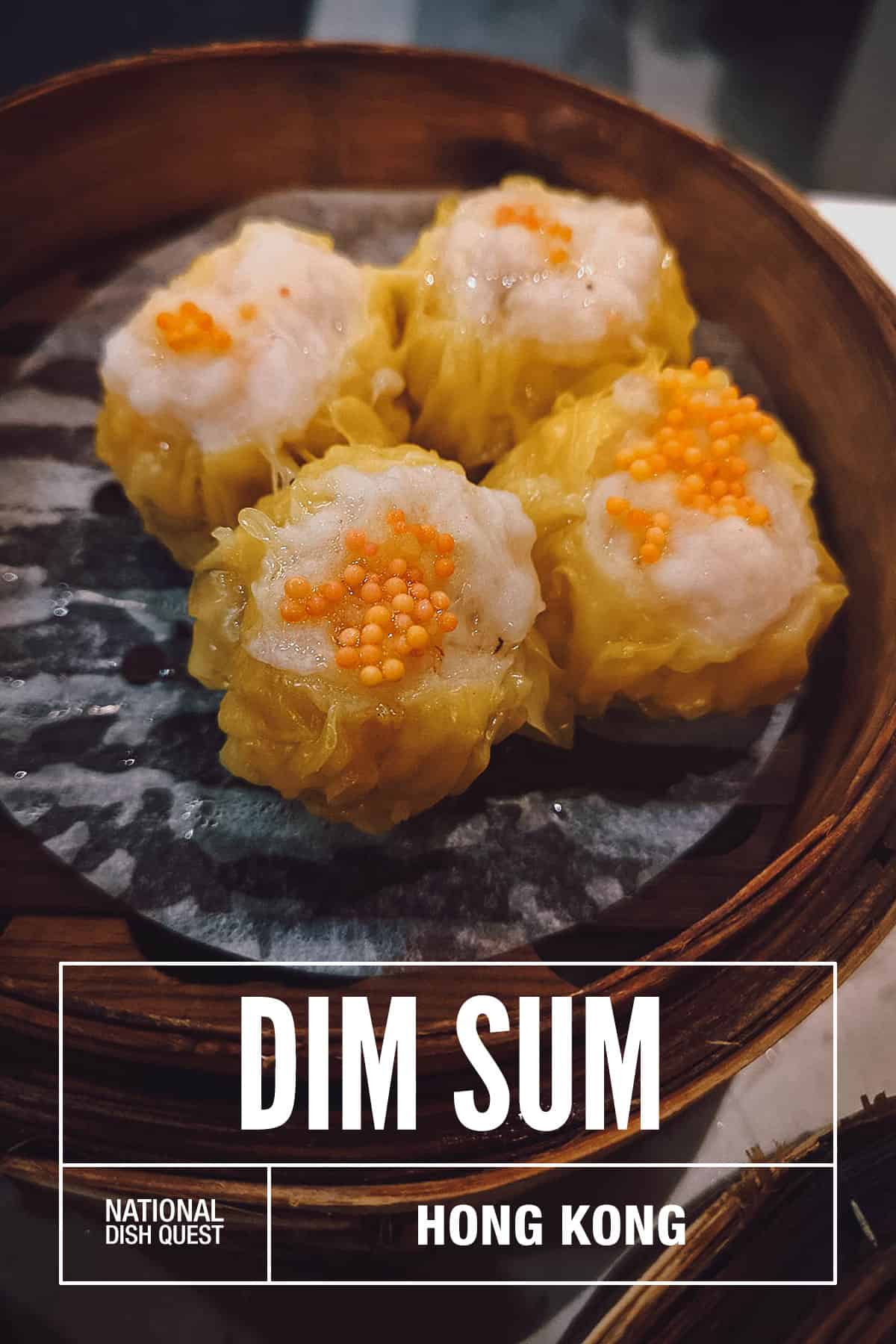 WHAT IS DIM SUM?

Dim sum is a style of Chinese cuisine. It can be found in different forms throughout the country, though it’s most closely associated with Hong Kong and Guangdong Province – ie Cantonese cuisine.

Traders traveling along the Silk Road would stop at local teahouses for rest and a cup of tea. With the growth of international trade came an increased demand for these teahouses, which would later introduce small bites of food like dumplings and buns to serve with their tea.

These early beginnings sowed the seeds for the modern yum cha experience. Yum cha literally means “drink tea” and refers to the practice of drinking tea with dim sum. The etymology of the term dim sum isn’t as clear, though it’s believed to mean “to lightly touch (your) heart”, or less figuratively “to barely fill (your) stomach”.

The yum cha brunches I enjoyed were mostly in the US so I came to associate the experience with spacious banquet halls and steamy pushcarts, a style of dim sum that was popularized in mid-1950s Hong Kong. That type of yum cha experience can still be enjoyed in Hong Kong though many of today’s restaurants have switched to a paper-based a la carte ordering system.

Dim sum, like sushi rolls, is always evolving. Some of the most traditional dishes have existed for centuries but new varieties and combinations are being created all the time. Listed below are some of the most common.

SIU MAI: Siu mai is one of the most common types of dim sum. It exists in many forms but the Cantonese version consists of ground pork, shrimp, mushroom, green onion, and ginger wrapped in a thin sheet of yellow or white dough. The top is open and typically garnished with crab roe, diced carrot, or a green pea for color.

HAR GOW: This is arguably the most popular type of dim sum. Har gow consists of whole or chopped pieces of shrimp wrapped in thin translucent skins.

CHEONG FUN: Cheong fun are made with slippery sheets of flattened rice noodle. They can be filled or unfilled, common fillings being shrimp, beef, mushroom, and vegetables. Whether filled or unfilled, they’re usually served drenched in one or more sauces.

TAU ZI FUNG ZAO: Also known as “phoenix claws”, tau zi fung zao refers to whole chicken feet that have been deep-fried then braised in a rich, sweet sauce before being steamed with fermented black beans and other aromatics. When served, the chicken feet are mostly skin and very gelatinous.

JIAN DUI: Jian dui is a crisp and chewy pastry made with glutinous rice flour coated in white sesame seeds and filled with lotus paste or black bean paste. People in the US call them sesame balls.

I didn’t know this, but apparently, yum cha has its own set of rules. Here are a few to remember:

Asking a local where to find the best dim sum in Hong Kong is like asking a New Yorker for the best slice of pizza or an Osakan for the best takoyaki – there’s no right or wrong answer and everyone will have an opinion. I googled “best dim sum in hong kong” and true enough, the answers were all over the place.

Nonetheless, here are a few of the most recommended contenders.

I only had time for one yum cha experience in Hong Kong so this is where I went. One Dim Sum was cited by a few trusted food bloggers as one of the best places to have affordable dim sum in the city. 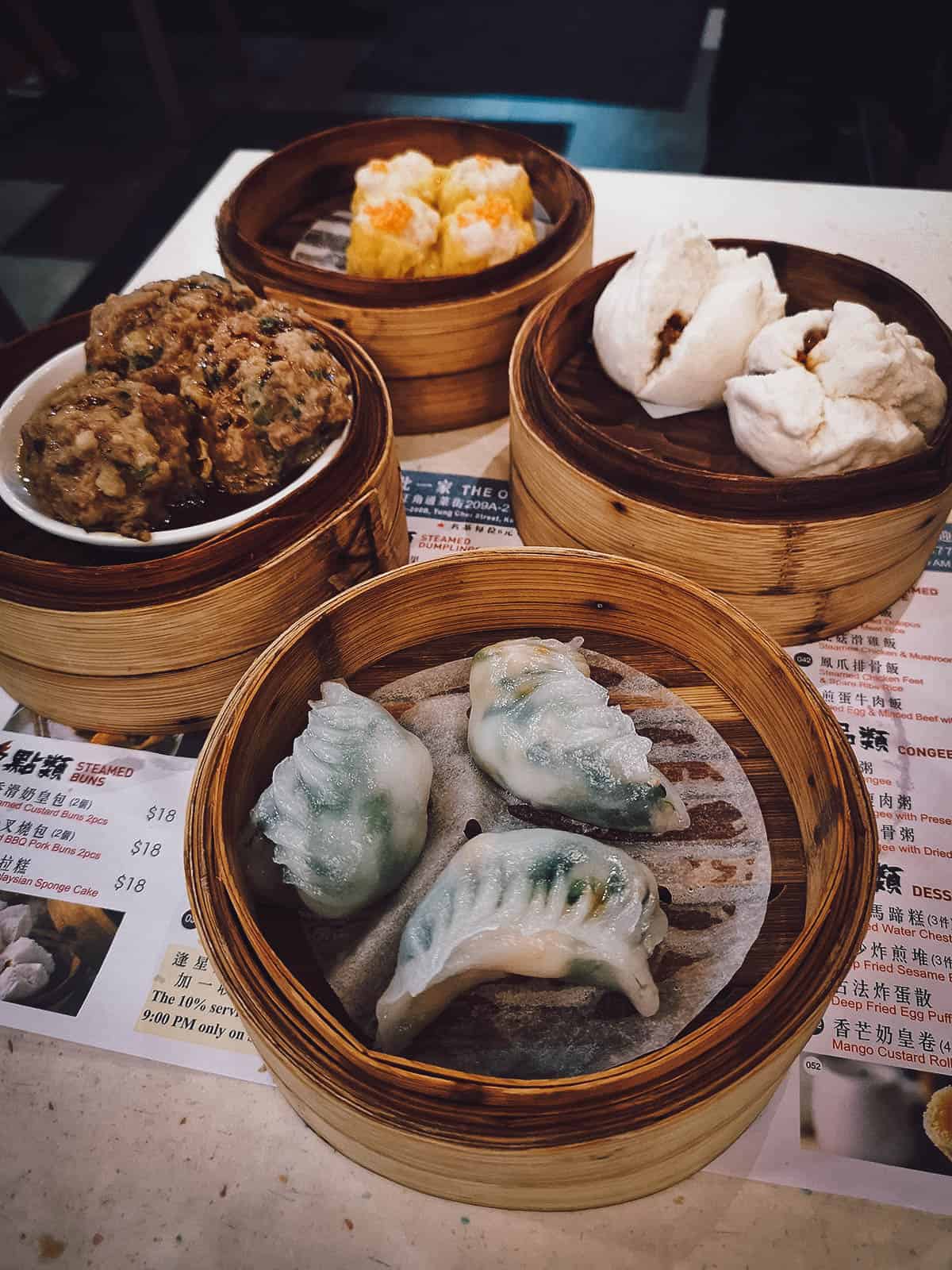 I don’t know what they’re called in Cantonese, but these shrimp and vegetable dumplings were delicious. They’re similar to har gow but with the addition of Chinese green vegetables for more flavor and texture. The shrimp was perfectly cooked – succulent and juicy with the green vegetables imparting fresh leafy crunch to every bite. 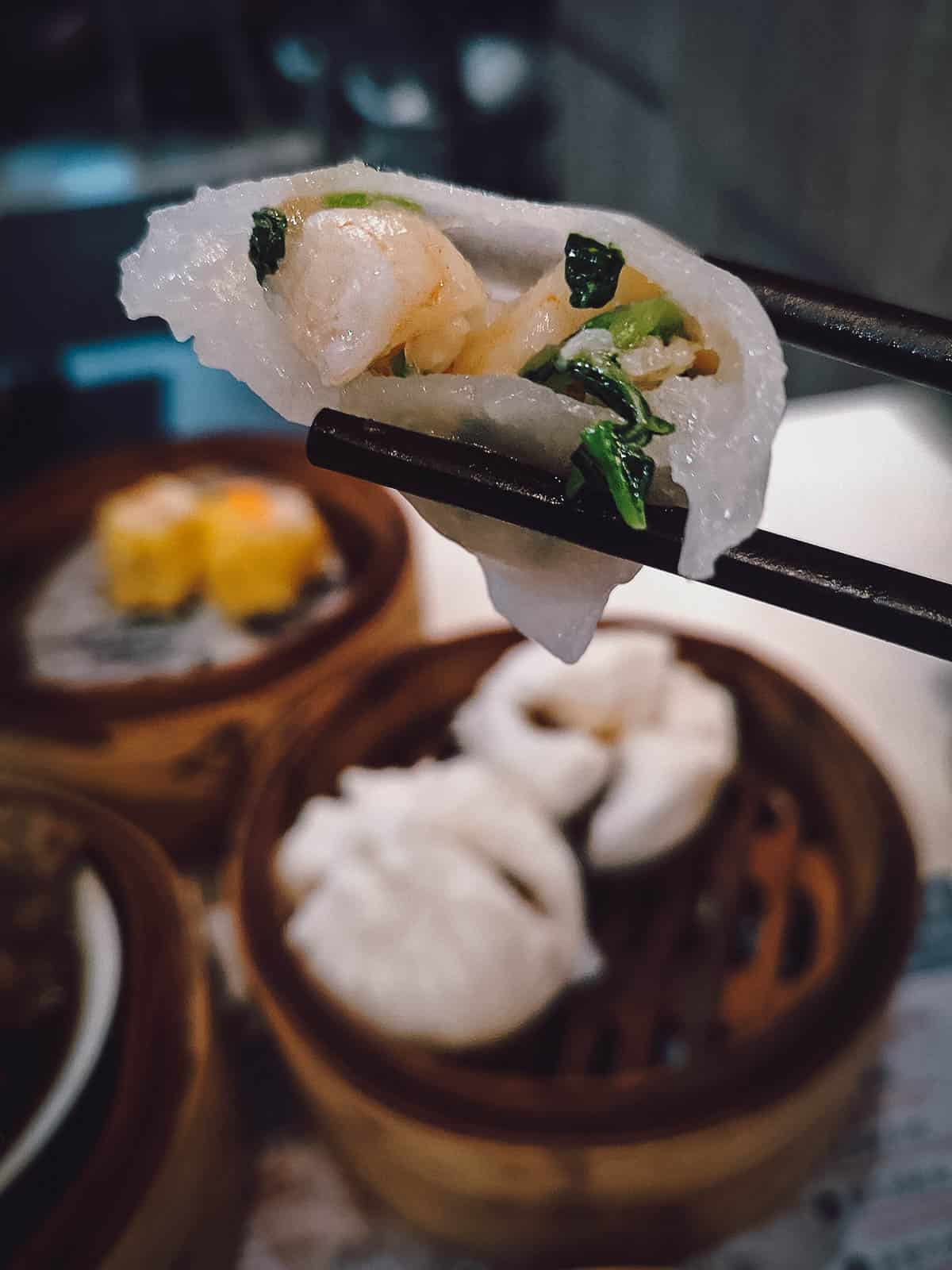 This basket of steamed beef balls was the only dish I enjoyed with a sauce. After dropping them off at my table, the server came back and doused them with some type of seasoned soy sauce. They were delicious – soft and sinewy in parts with the pronounced flavor of Chinese five spice. 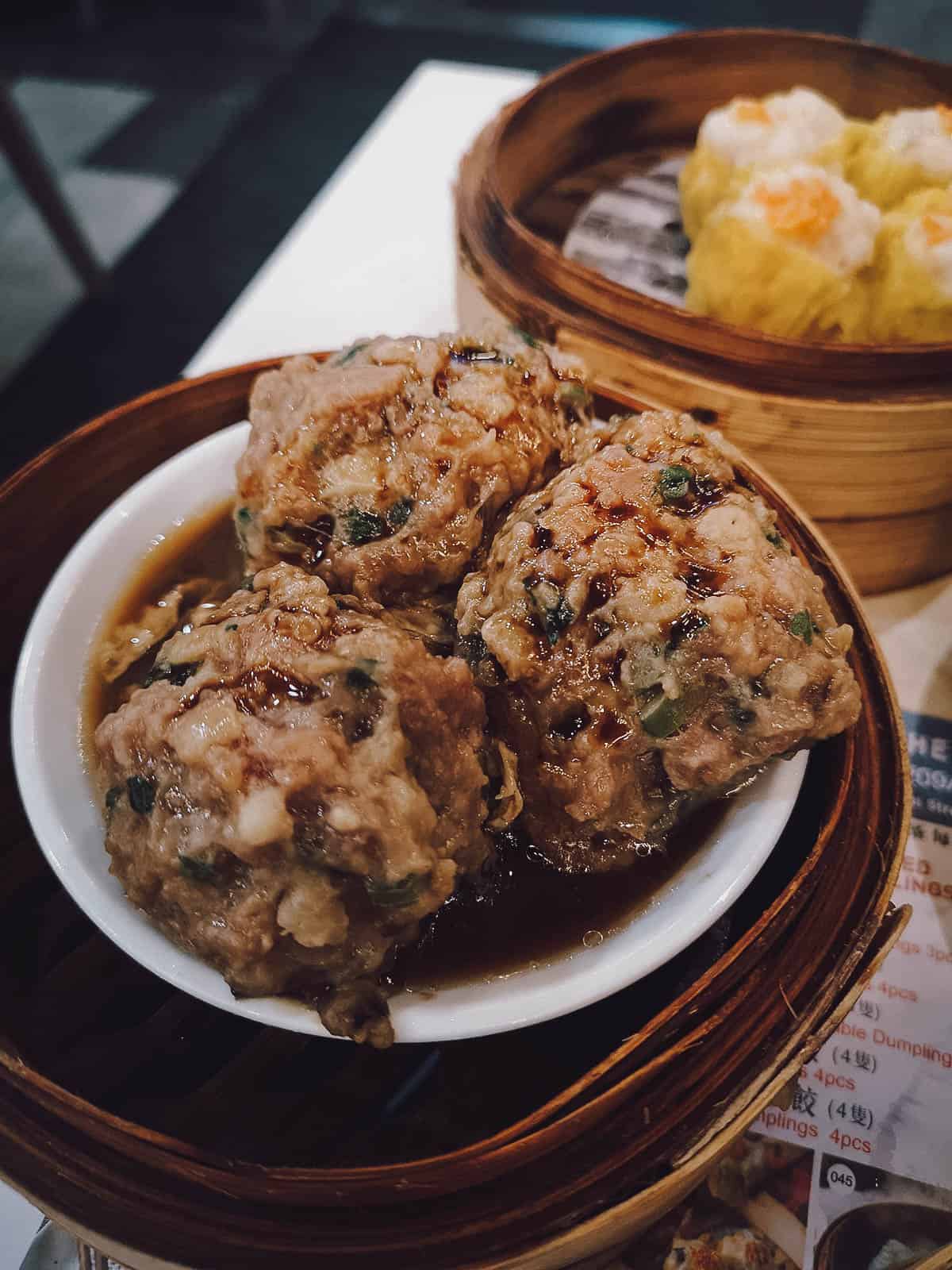 The ever popular siu mai garnished with what look like fish or prawn roe. I ate one on its own but I couldn’t really tell what it was. In any case, the siu mai was tasty. It was soft with snap and enough flavor not to warrant any soy sauce. 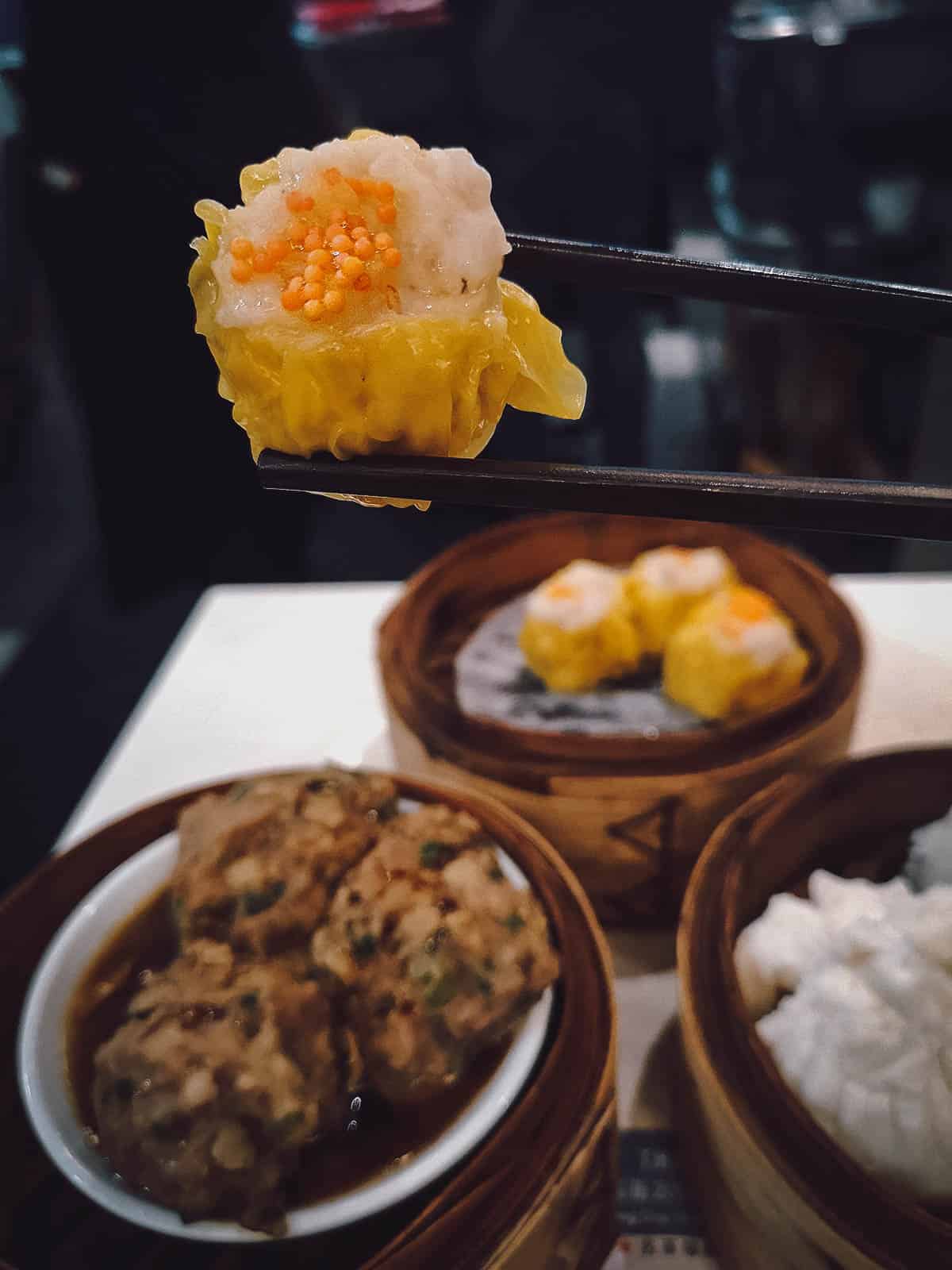 One Dim Sum is known for their char siu bao which are like pork-filled clouds of char siu deliciousness. 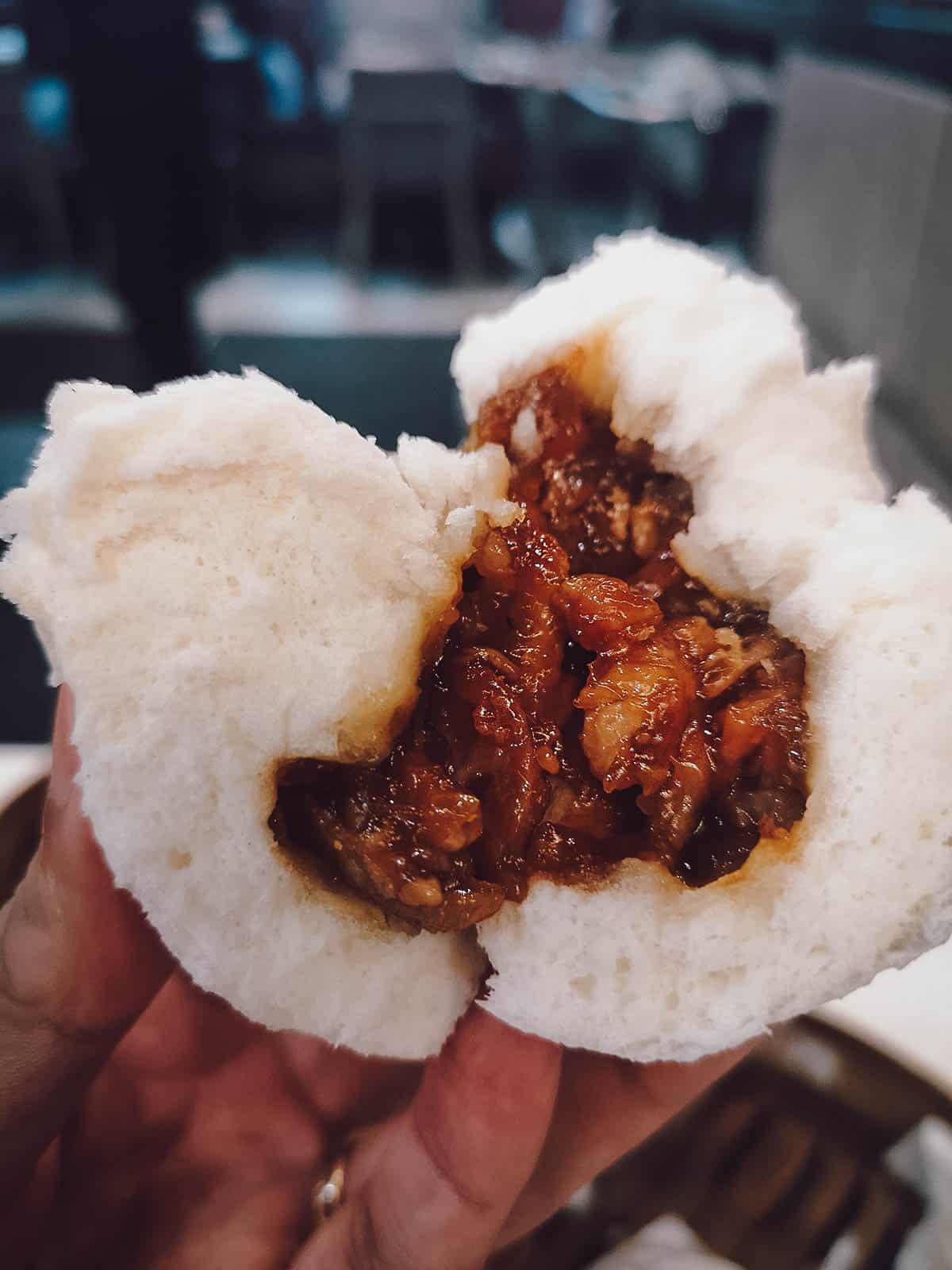 I don’t know what these deep-fried glutinous rice pork dumplings are called in Chinese, but they were delicious and my favorite dish from today’s spread. 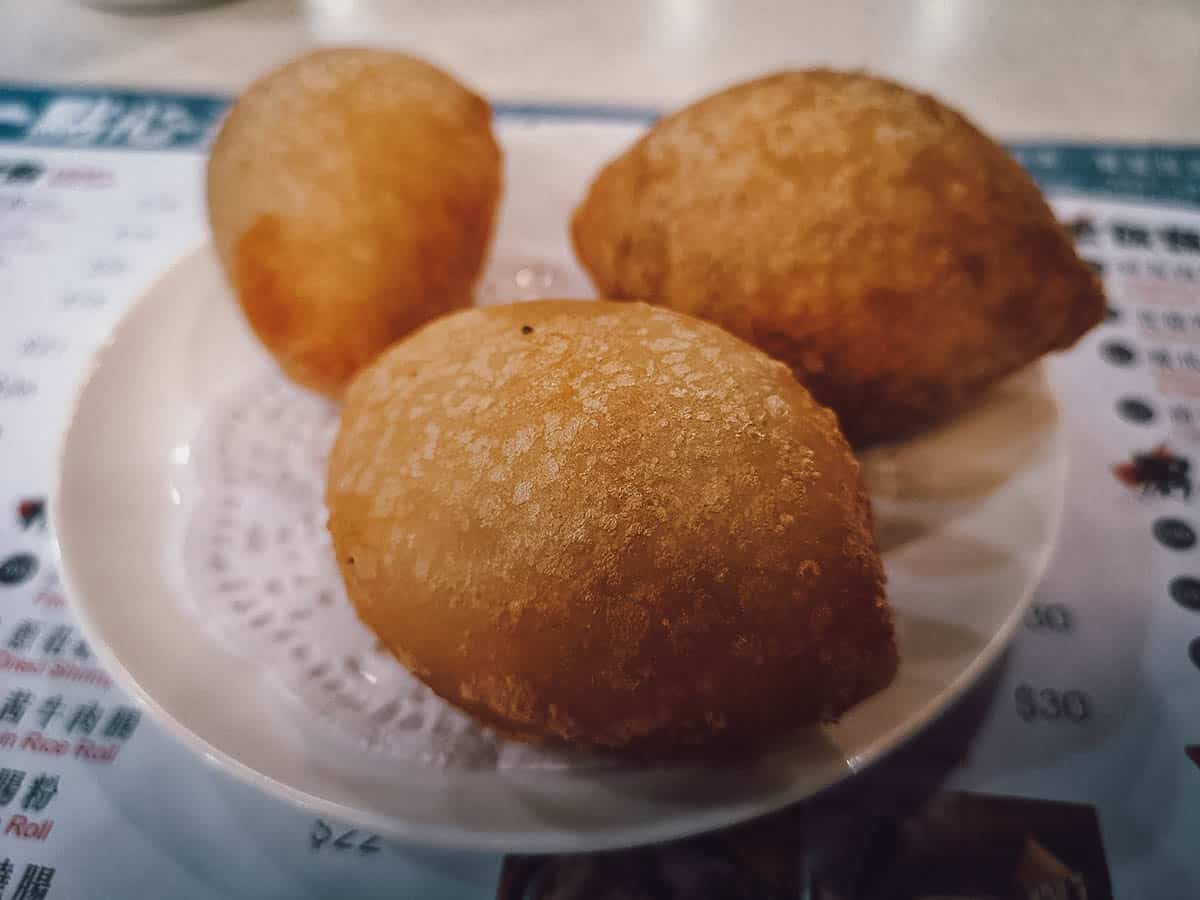 Tear it open to reveal an airy orb of glutinous rice filled with minced pork. They were a little greasy from being deep-fried but the taste and texture more than made up for it. 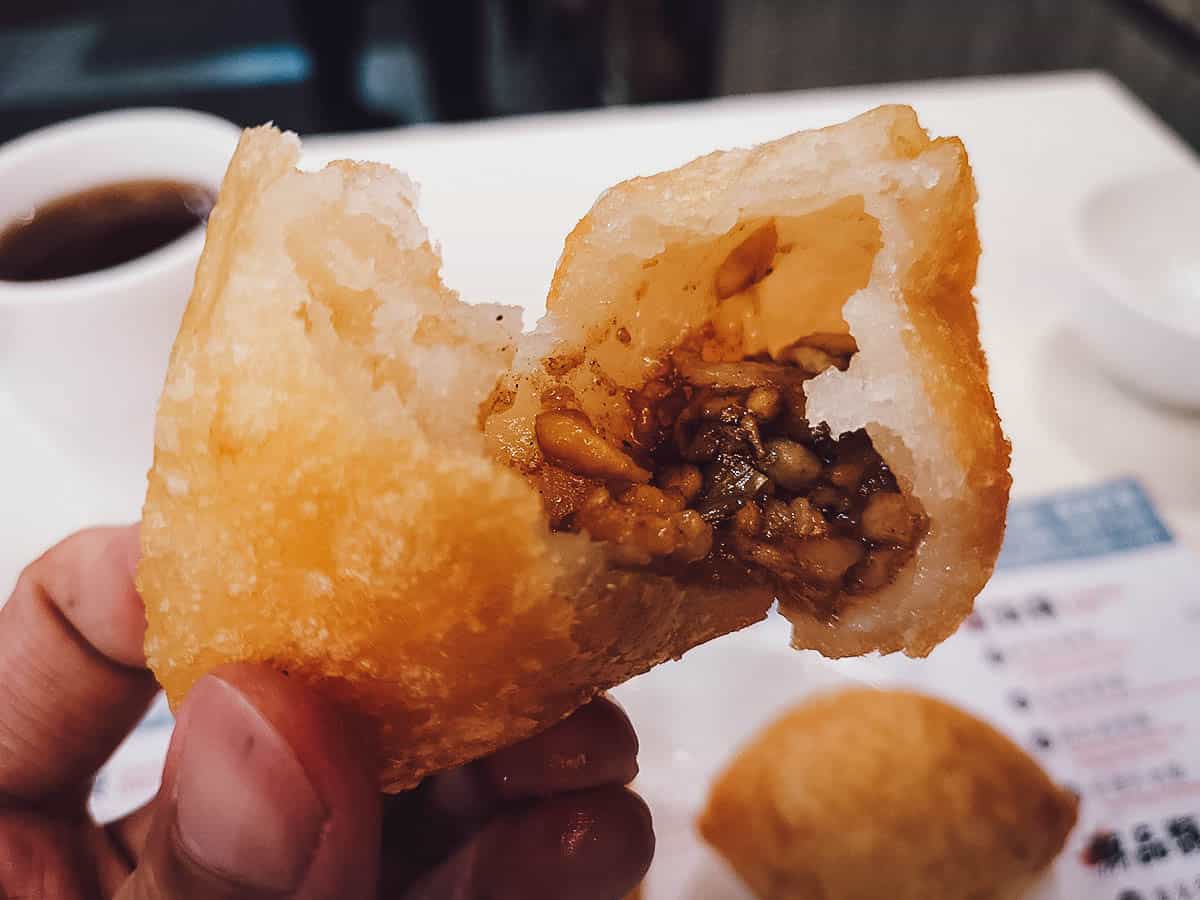 You can’t make a list of the best yum cha experiences in Hong Kong without mentioning Tim Ho Wan, once lauded as the cheapest Michelin-starred meal in the world. They serve solid dim sum but they’re best known for their bbq pork buns. These baked beauties put them on the map and turned Tim Ho Wan into a global phenomenon. 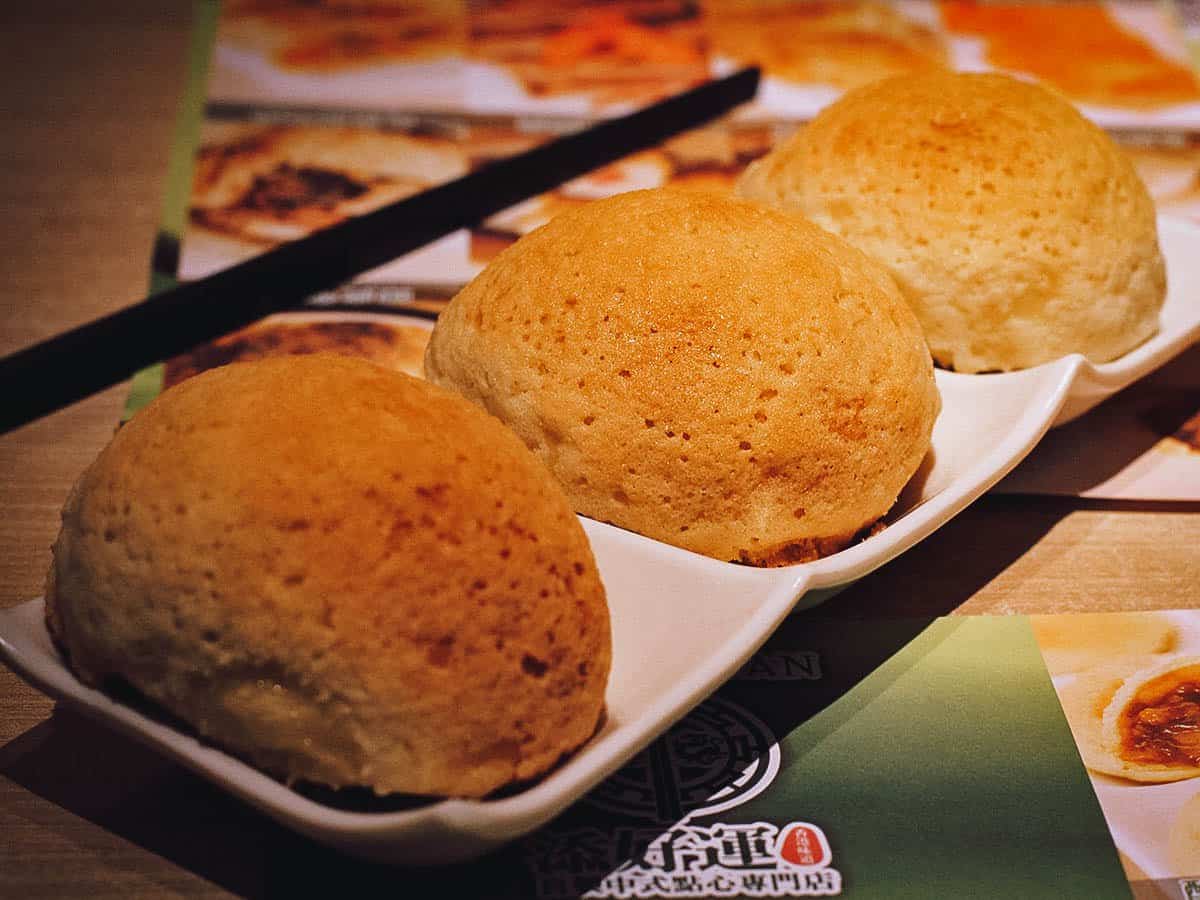 If you think traditional char siu bao is good, then wait until you get a taste of these. Baked fresh daily, the buns have a thin coating on top which makes them a little sweet and crunchy. Take a bite and steam will billow from the bun to reveal glazed chunks of barbecued pork with just the right amount of sweetness. These are so incredibly delicious. 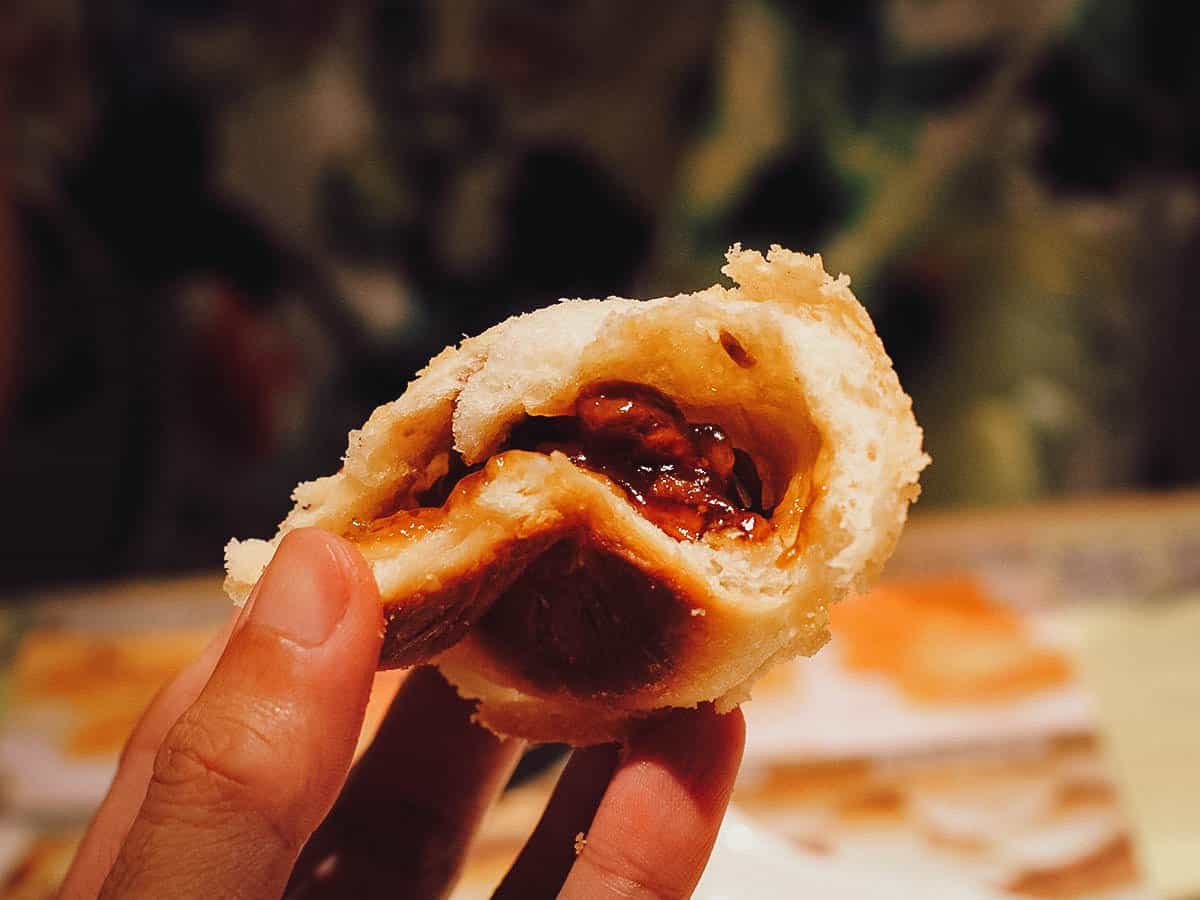 We haven’t eaten here but I came across Lin Heung Tea House more than once when searching for the best dim sum in Hong Kong. They’ve been open since 1928 and considered by many to be the “grandaddy of Hong Kong’s dim sum joints”.

Based on what I’ve read, if you want classic dim sum in the most traditional teahouse setting, then this is where you need to go. Just be prepared to elbow your way to the best and freshest baskets because this place is popular.

We’ve been hearing about this upscale restaurant for many years now. Every food-obsessed friend and family member has pointed to Mott 32 as the best place for high-end dim sum, and the online community seems to agree.

Personally, I prefer more traditional yum cha but Mott 32 sounds too good not to experience at least once. Ren and I are already talking about our next trip to Hong Kong. Once we’ve firmed up our dates, securing reservations at Mott 32 is the first thing I’ll do.

I learned about the Yum Cha chain from the same Medium article about the future of dim sum. They’re a new-school dim sum restaurant that caters to the younger Instagram set with their pig-shaped buns and googly-eyed baos. We’ll definitely check them out as well on our next trip to Hong Kong.

THE FUTURE OF DIM SUM IN HONG KONG

Going back to the future of dim sum, there are signs that traditional yum cha culture in Hong Kong is dying. According to the article, the core yum cha fan base is aging, as is the pool of skilled cooks who can make it. Western restaurants are said to offer better benefits and allow more creative freedom than the world of traditional Cantonese fine dining.

On top of it all, Hong Kong has the most expensive real estate in the world, making you wonder how classic teahouses offering affordable yum cha can survive in today’s landscape. Case in point, my little feast at One Dim Sum set me back HKD 116 (about USD 15) in a space that probably costs around HKD 140,000 (about USD 17,850) a month in rent. How many baskets of har gow do they need to sell just to break even?

I’m not an expert on yum cha so I can’t speak about its future, but I’d like to think that something as culturally significant as dim sum will find a way to stay. It has to. For traveleaters like us, a trip to Hong Kong without dim sum is like a trip to Singapore without laksa. It’s unthinkable.

The author does end his article on a positive note, expressing optimism about dim sum’s profitability and how easy it is to package and sell to tourists flocking to Hong Kong for a taste of the world’s best. Perhaps yum cha culture isn’t dying, it’s just evolving. The success of Mott 32 and modern commercial chains seems to be a sign of that.

No matter what the future holds for yum cha in Hong Kong, I suggest experiencing as much of it as you can. Go for the whole spectrum. Fight your way at traditional teahouses like Lin Heung and taste its possibilities at Mott 32. You’re in the city with the world’s best dim sum so enjoy it and enjoy it often.

On our next trip to Hong Kong, that’s exactly what we’ll do.

The TripAdvisor links in this post are affiliate links, meaning we’ll earn a small commission if you make a booking at no extra cost to you. We really appreciate your support as this helps us keep this website going. Thank you!

28shares
There are 6 comments for this article