11 Different Types of Sushi to Try in Japan

Posted on Last updated: July 5, 2021 By: Author The Traveleaters

EDITOR’S NOTE: Traveleater James is a sushi enthusiast and owner of a sushi blog called Easy Homemade Sushi. He has been to Japan numerous times and loves Japanese food and culture. He is also a passionate writer and likes to share his experiences and knowledge through his blog.

A trip to Japan is not just your ticket to discovering the fascinating culture of the country, but also experiencing their highly intriguing and varied traditional cuisine. Talk about food in Japan, and the first thing that comes to mind is sushi.

It’s not until you visit Japan that you realize how tough it can be to order a plate of sushi. You have probably gorged on your favorite Japanese dish countless times at the sushi bar close to your office or home, but tasting sushi in Japan is something you will likely hold close to your heart and remember for the rest of your life.

Everything from the feeling of entering the holy temple of sushi to watching a master Japanese chef prepare the delicacy in front of your eyes is an experience to cherish. Some restaurants may have just one or two kinds of sushi, but there are other places where you will be simply spoilt for choice.

If it’s your first time in a dedicated sushi bar or restaurant in Japan, then you may feel overwhelmed with the options. Some types of sushi may not be familiar to you even if you consider yourself the expert back home.

To make it easier for you to understand what’s on the menu and on your plate, we have created this first-hand guide to help you get to grips with the different types of sushi you can get in Japan. Read on to find out more about this tempting dish of rice, nori, and everything in between and over it.

No time to read this guide on the different types of sushi in Japan? Click on the save button and pin it for later! 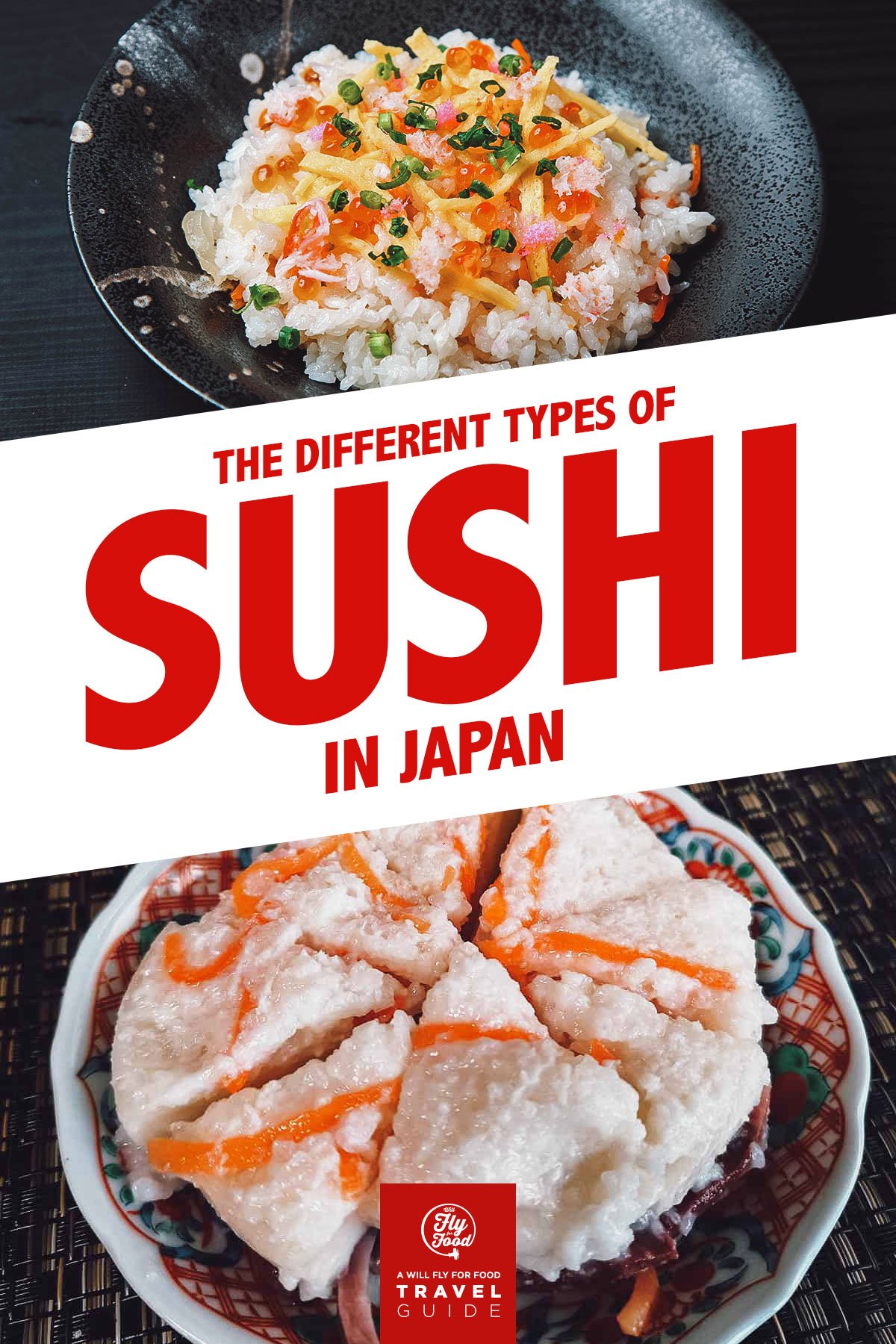 11 KINDS OF SUSHI TO TRY IN JAPAN

Nigiri (hand-pressed) is the most common type of sushi and is shaped by the chef’s own hands to give it a unique shape. It comprises of a bed of vinegared rice compressed into an oval shape, molded by hand, and topped with neta (fish).

The typical options of neta here are tuna, salmon, sea eel, freshwater eel, tamago, squid, or octopus. It is served with wasabi, soy sauce, and pickled ginger. The chef already adds the right amount of wasabi and sauce to sushi, so you must refrain from overdoing it when eating.

The term nigiri means “to hold, grab, or squeeze”, and it refers to the chef’s hand motion when shaping the rice with his fingers.

This is like comfort food for sushi lovers, and it’s so named because it comprises ingredients scattered in a bowl. In Tokyo, they may be also called Kaisen Chirashi Sushi or Edomae Chirashi Sushi due to slight differences in their arrangement.

The most common type of chirashi is sashimi nicely arranged over sushi rice, while the other variation has all of the ingredients mixed together. Besides the sushi rice, other ingredients may include kanpyo (gourd strips), bamboo shoots, fish cakes, inari age, avocado, green beans, Sakura Denbu (seasoned codfish), and Tobiko (flying fish roe).

Chirashi sushi is the easiest to prepare and is a popular dish during festivals, parties, and family gatherings.

The term “Narezushi” is believed to have been coined in the 10th century when the first ever forms of sushi appeared. It was used as a method of preserving fish by pickling it with rice and salt. In those days, rice was discarded and only fish was consumed.

Although sushi has come a long way since it was first invented, even today you can find traditional narezushi dishes in many restaurants. The name itself is an ode to its creation and ancient history, so it’s worth trying during your trip to Japan.

Narezushi looks nothing like modern-day sushi because it is served as a whole fish and covered in a yogurt-like sauce. The fish is sliced into patterns and arranged over a bed of vinegared rice. We should warn you that this dish could either make or break your appetite, as you typically need an acquired taste to appreciate the flavors.

Kida Yasuo, CC BY 2.0, via Wikimedia Commons / Processed in Photoshop and Lightroom

This is another form of Narezushi that is made using salted buri wrapped with seasoned kabu (turnips). The dish is then pickled in kouji or amazake, so it takes a lot of time to prepare. The resulting taste is quite simply unique.

Kabura Sushi is highly regarded as one of the best winter foods in Kanazawa City and Toyama. The locals have their own unique variations to the traditional recipe, with some also using mackerel in the dish. It is also considered as the staple dish served traditionally at New Year.

In Japan, you will find sushi packed in quick takeaway boxes known as hakozushi. Hako means box and zushi is sushi. It has a typical square-shaped presentation comprising of fresh pieces of cube-shaped rice topped with fish or tobiko.

These boxes are presented in an elegant way, making them a popular choice in Japan. It’s worth noting that the process for preparing hakozushi is often time-consuming and labor-intensive.

While hakozushi has become a rare dish these days, you can still find several outlets that offer a variety of styles and flavors. Besides presentation, the quality of ingredients is also important while making hakozushi. Some common ingredients include fish, meat, and vegetables.

Oshizushi, also known as pressed sushi, is probably the oldest kind of sushi that you will find in various parts of Japan, especially at airports. Also known as box sushi, oshizushi packs sushi rice and mackerel tightly in boxes for takeout.

This type of sushi is traditionally prepared using a wooden mold called oshibako. These days, plastic molds are also used at eateries to make quick sushi for travelers. They contain alternating layers of seasoned rice, condiments, and toppings.

These tempting sushi balls are not only delightful to eat but also exotic in their appearance and overall appeal. Designed like a traditional Japanese embroidered ball, they look like edible decorative ornaments with bright and colorful toppings.

Temari consists of two main parts – sushi rice as the base and toppings ranging from raw fish to assorted vegetables. There are also cooked toppings such as smoked salmon, boiled crab, grilled meat, and boiled shrimp.

If you thought sushi could only be wrapped in nori or seaweed then this may be a surprise to you. Sasazushi is a type of sushi that comprises of sushi rice, condiments, and toppings such as bamboo shoots, zenmai, warabi, and pickled vegetables.

This is a popular kind of sushi that can be served in two main ways. The bamboo leaves can either be wrapped like nori around the sushi rice and toppings, or they can be used as a base plate with the ingredients served on top.

If you have never seen temaki before then the format may slightly perplex you, because it’s nothing like traditional sushi. Often referred to as a sushi hand roll, the nori or seaweed is rolled into a cone shape with a variety of ingredients packed into it.

These ingredients include sushi rice, avocado or cucumber slices, and fish which all spill out of the wide end. This type of sushi is best eaten by hand instead of with chopsticks and comes in one piece instead of the typical eight on a plate.

The world is going crazy about temaki sushi, with some big outlets popping up in New York, Chicago, and Washington, D.C., to name a few. While you are in Japan, don’t miss out on the opportunity to try temaki in the land that started it all.

In this unique variation of sushi, the creators dropped the nori and substituted it with aburaage or deep-fried tofu instead. If you love sushi but the taste of nori puts you off, then you may try out this kind of sushi at one of the many inarizushi outlets in Japan.

For those who are unaware, boiled aburaage has a salty-sweet taste and comes in the shape of a bag stuffed with vinegared rice and other typical sushi ingredients. Some examples of common ingredients used are mushrooms, carrots, and kanpyo, or dried gourd shavings.

In some eateries, aburaage may be stuffed with chirashizushi as a take-out option. Interestingly, inarizushi is known by different names in different areas of Japan depending on the shape and types of ingredients used.

Invented at the Ginza Kyubey restaurant in 1941, gunkan maki is a special type of nigirizushi that uses finely chopped ingredients over a bed of sushi rice, and nori on the outside to cover the perimeter. Also known as battleship sushi, it is so named for its boat-like shape.

If you have ever been to Japan, you will know that this is one of the most common types of sushi you can get in the country. It comprises of a hand-formed clump of vinegared rice that has soft toppings that are often scooped in with a spoon.

Some common examples of toppings are fish roe, tuna, or even oysters. You can find this dish in almost every sushi shop and specialty sushi outlet in Japan.

If you’d like to learn more about the different types of sushi in Japan, then you may be interesting in going on a sushi tour. No one knows sushi better than the Japanese so you’ll have the benefit of a guide explaining the different kinds of sushi to you in more detail. Check out Get Your Guide for a list of sushi tours in Tokyo, Osaka, Kyoto, and other cities in Japan.

Going on a sushi tour is great but if you’d like a more hands-on experience with sushi in Japan, then you may be interested in taking a sushi-making class. It’s one thing to eat sushi but it’s quite another to learn how to actually make it. Check out Cookly and airKitchen for a list of sushi-making classes in different cities throughout Japan.

Now that you are well aware of the different types of sushi you can get in Japan, you can go ahead and treat your taste buds with the many exotic flavors and aromas these traditional dishes offer.

Some of the links in this sushi guide are affiliate links. We’ll earn a small commission if you make a purchase at no extra cost to you. As always, we only recommend products and services that we use ourselves and firmly believe in. We really appreciate your support as it helps us make more of these free travel guides. Arigato gozaimasu!