EDITOR’S NOTE: Traveleater Mike of Hoi An Now shares his experiences with one Vietnam’s most popular and iconic dishes, the banh mi.

No time to read this article on Vietnamese banh mi now? Click on the red save button and pin it for later! 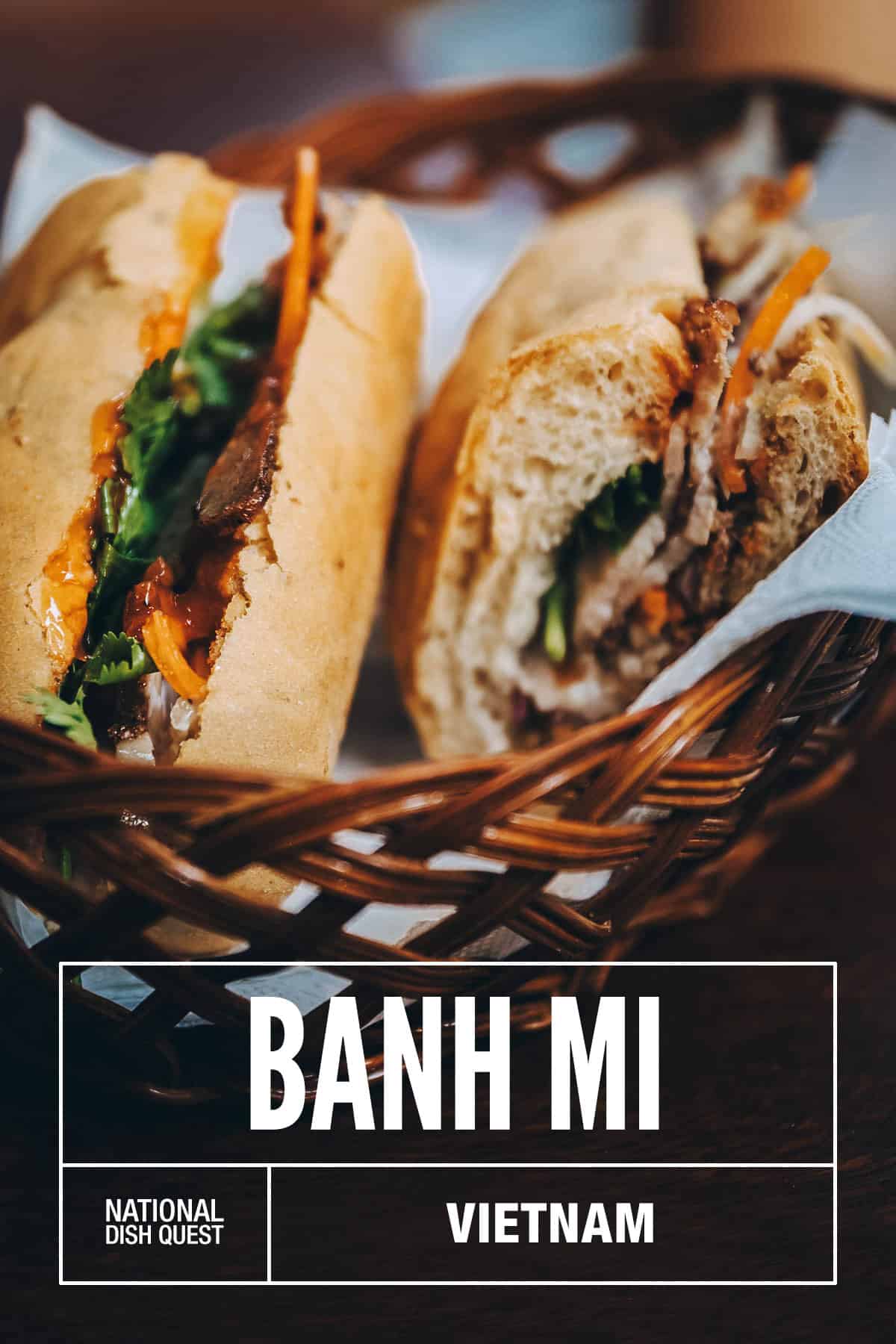 Photo by Flo Dahm via Pexels

WHAT IS BANH MI?

Banh mi dates from the French colonial period and is perhaps one of the original fusion foods of Vietnam. It literally means ‘wheat cake’ but it’s now come to mean a type of sandwich – with an extensive range of ingredients from both Vietnamese and French cuisine.

And no trip to Vietnam would be complete without indulging in several.

A ‘banh mi baguette’ can be picked up for just 10 cents from any baker. As it’s baked from a combination of rice and wheat flour, it’s lighter and has a thinner crust than bread found in the West. So it’s like a guilt-free visit to the baker!

You can grab banh mi easily in Vietnam and make your own sandwiches at home; however, the baguettes age quickly – within a few hours they lose their vitality and begin to harden. They must be eaten freshly baked as the Vietnamese do, still hot and crunchy. Mmm… 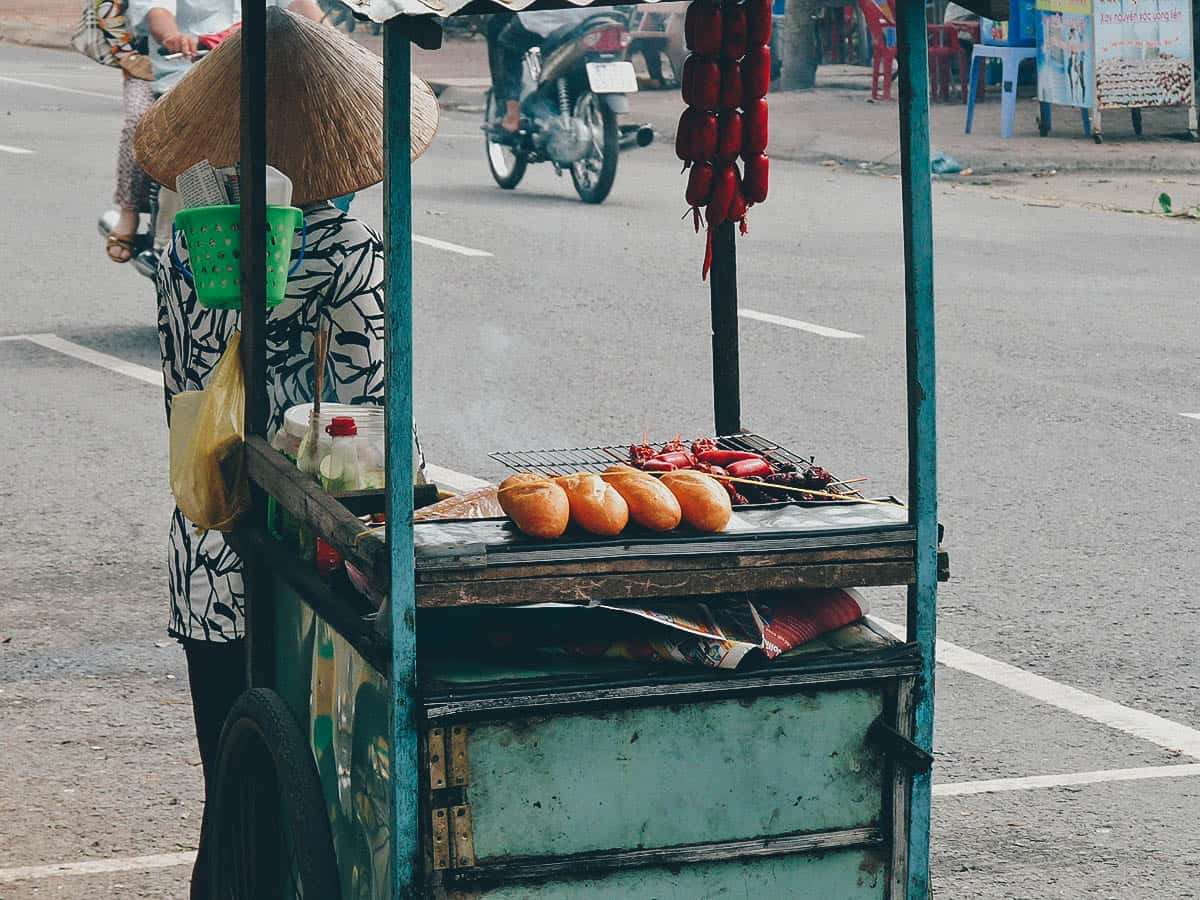 My First Banh Mi in Hue

Also known as banh mi thit (thit = meat), these filled sandwiches appear to be one of the most approachable foods for visitors to Vietnam. They’re cheap (less then 50 cents) and very popular with tourists in a land of rice and noodles.

Shortly after I arrived in Vietnam, I couldn’t have been happier when I spotted a banh mi seller by a suburban market in the backblocks of Hue – but appearances can be deceiving. Once past the inviting pictures, I watched aghast as thick chili sauce was applied like peanut butter all over. There were many ingredients but sadly I could only taste a single (incredibly spicy) one. In the end, gasping for air and guzzling water, I threw my first banh mi away after a solitary bite.

Now don’t get me wrong – I love chili. But the way it can be troweled on in Vietnam beggars belief. In addition to the chili rush you also need to be prepared for far fattier cuts of ‘mystery meat’, with an extra helping of gristle. The Vietnamese are flabbergasted that foreigners prefer lean fillets of meat rather than fatty bits near the bone. Each to their own, I guess.

“Bánh mì” by Rory Harnden, used under CC BY-SA 2.0 / Processed in Photoshop and Lightroom from original

After six years in Vietnam, thankfully my chili threshold has increased. It’s also become clear that banh mi vendors aren’t all as mischievous as my first in attempting to make my eyes water. Also, a smattering of the Vietnamese language (‘a little chili, please’) goes a long way.

In my current home town of Hoi An, banh mi street vendors abound on corners and in the markets – and I rarely come across a bad one. There are also a number of specialists who have set up dedicated shops; catering their banh mi more to tourists than to locals. Not surprising in a town with a local population of only 120,000 but that welcomes nearly two million tourists a year.

The leading vendors for tourists are: Banh Mi Phi, Banh Mi Queen and Banh Mi Phuong. At these popular locations the original Vietnamese style has been preserved – but it’s not quite as potent (or gristly, or fatty!) as local choices and there are many more Western-friendly items on the menu.

Banh Mi Phuong in particular has a large selection and queues down the street are common. On their menu board, bacon, cheese, chicken, tofu, beef and vegetable combinations sit alongside the standard barbecued and grilled pork options. Prices might be double than those found on the street – but you’re still only looking at a dollar or so, and it’s often worth the mark-up. 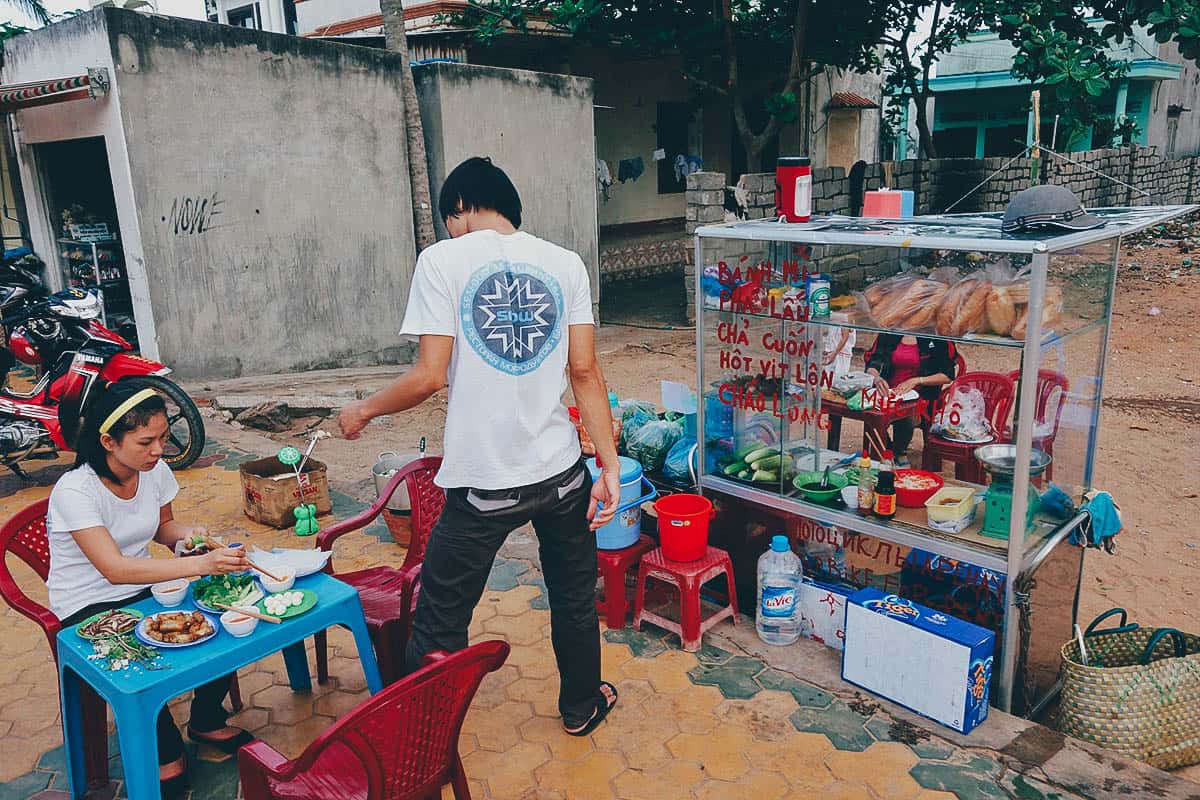 “A ubiquitous Bánh mì stand” by Dion Hinchcliffe, used under CC BY-SA 2.0 / Processed in Photoshop and Lightroom from original

For me a big part of the banh mi experience is watching the preparation – and this is best done at a local market. Deftly and with lightening speed, using chopsticks, spoons, spatulas and knives, an extraordinary number of ingredients are thrown together in seconds.

Mayonnaise, pate and, of course, the inevitable hot chili oil, form a base in a trice. Three or four different styles of sliced pork follow as well as slithers of cucumber, green coriander (cilantro), jalapeno, pickled carrots, cheese and daikon. It’s a whirl of hands almost too quick to follow; before you know it, your banh mi is ready, secured with a small sheet of white paper and a rubber band.

In recent decades, fusion food has been all the rage in Vietnam – often with very mixed results. But the modern-day banh mi has benefited greatly from a slow evolution over 200 years or so. In this case, the Vietnamese have got it oh so right.

At my favorite banh mi vendor in the local market, the three different textures of pork are tasty and succulent; the bite of chili beautifully balanced by thin slices of cucumber, cilantro and the tang of pickled carrot. The home-made pate and mayonnaise permeate the lot for a winning combination.

For me, banh mi is a genuine culinary triumph, an exquisite fusion of two national cuisines. Delis in the West agree and are now adding it to their special ‘gourmet listings’, while serving it up at exorbitant prices.

In the meantime, it’s readily available at thousands of markets and street stalls all over Vietnam – as common as burgers and hot dogs in the US – for less than 50 cents. A fact which most people here don’t think twice about.

For in Vietnam, banh mi will always play second fiddle to noodles and rice – the food of the people for millennia past – and dishes like Pho Bo, Bun Bo, Cao Lau and Duck Porridge will continue to dominate the breakfast tables, the hearts and the minds of the local people.

That’s ok – it just means there’s more for us.

Yes, the translation of bánh mì word for word IS "wheat cake." Rudeness and bad attitude please keep it to yourself. I grew up in Nha Trang and in the 80s and 90s the bánh mì was delicious, so hearty and not flaky like they are now. At 4,5 am, there was a vendor with his basket full of freshly hot baked bánh mì hopped from door to door advertising loudly " who wants baguette? " Every households would jump out and grab 4,5 loaves because they went fast. The best bánh mì thịt cannot be just stuffing but the bread itself also. I think Nha Trang has the best bánh mì ( I'm biased for sure 😜) compared to Sài Gòn or Hà Nội. Thank you for your article, it take me back the memory lane.

Thank you for sharing Mina! Absolutely love hearing personal stories like that. :)

Thanks for the catch Viet! I've corrected it on Mike's article. Cheers.

Wholeheartedly agree with the article writer. He was on the spot about Bánh Mì-the translation-but I am here to talk about Bánh Mì. I grew up with it, it was cheaper about 10 to 20 cents for Bánh Mì Không-nothing in it, nothing just the bargette. That was usually my breakfast before school if I am lucky-in the early 80, Because we was so poor than. I recommend that the author should go to the Delta region, especially the deeper Southern part to try the variations Bánh Mì. I am petty sure you will like it because I had tried the Bánh Mì in Hôi An and its is not good to me. May be because I am biased. Thanks for the article and keep up the good work.

Thanks for the very insightful comment Phe. Stories like yours are fascinating to me. I was in Vietnam for a month this past September and traveled from Hanoi and Sa Pa all the way to Sa Dec and Can Tho. I spent a few days in Ben Tre and went to the most popular banh mi shop in town. It was highly recommended to me by my homestay host and it was indeed fantastic.

Personally though, my favorite was the banh mi in Hoi An. But this is coming from a foreigner who isn't as familiar with the subtle nuances of Vietnamese food. Authenticity from a local's point of view is important to me which is why I enjoy reading comments like yours.

What are the main differences you'd say between central and southern Vietnamese banh mi?

Love these articles. My daughter and family just vacationed for a month in Vietnam. As a kid of German parents I’ve eaten quite enough fat and gristle. I’m paying a dollar for mine. Are we all supposed to say something rude before I leave you ? Don’t want to upset the apple cart. Thanks, Steve from St. Louis, MO

Hey Steve, banh mi and Vietnamese food in general are pretty awesome indeed. And no, rude comments aren't necessary. Only if you're a keyboard warrior with daddy issues. All the best.