I have mixed feelings about this place.

An animal lover through and through, I’ve always enjoyed going to zoos. In fact, I make it a point to visit at least one animal sanctuary on every trip. Thinking back on our travels, watching an 8-ft Komodo dragon wolf down an entire chicken and feeding eucalyptus leaves to a koala remain some of my fondest wanderlust memories.

The older I get though and the more petitions I sign in protest of animal abuse, the less inclined I am to go. In many cases, it just doesn’t seem humane anymore to keep animals in captivity for our entertainment, especially the larger mammals.

But with this Kaiyukan in Osaka being an aquarium, housing mostly fish that aren’t as intelligent nor self-aware as mammals, I didn’t think I’d have any moral reservations about the place. Until I saw the dolphins. Ugh. 👿 More on that later.

Located in Tempozan Harbor Village in Osaka, entrance to the aquarium is ¥2,400 for adults. It’s one of the world’s largest aquariums with tanks holding a cumulative 11,000 tons of water. 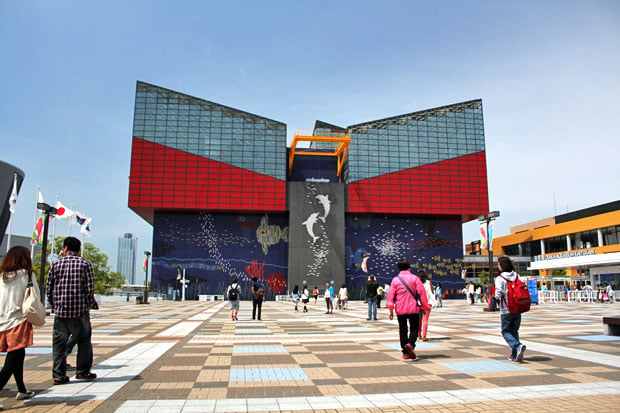 You start at the top and make your way down through the exhibits in a circular motion. At the center of the spiral is the aquarium’s largest tank (pictured below), with many smaller tanks around its perimeter. This main tank is 9 meters (30 ft) deep and holds 5,400 cubic meters (190,699 cubic ft) of water.

The undisputed stars of the large central tank are two juvenile whale sharks, Rhincodon typus, both of which unfortunately weren’t on display today. According to the staff, they had been refusing to feed for weeks so were isolated and put under observation. 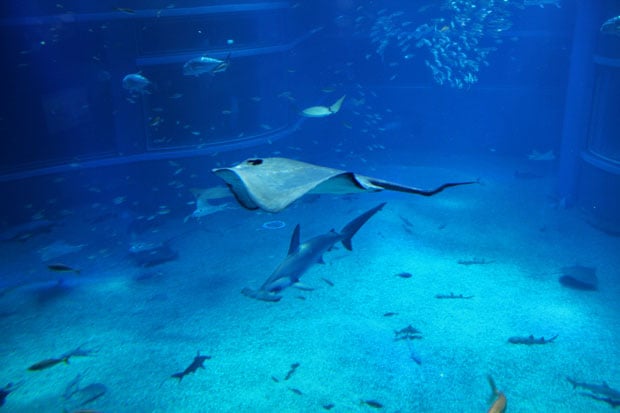 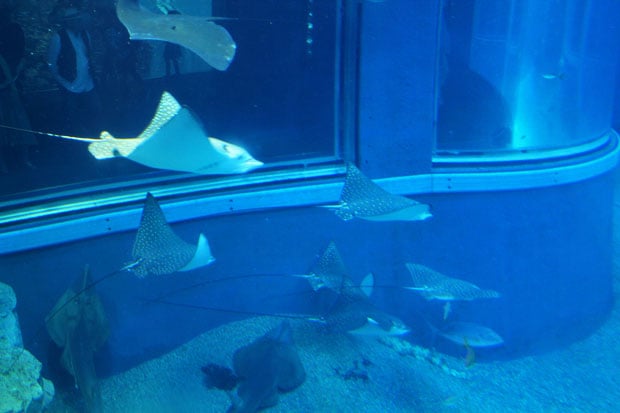 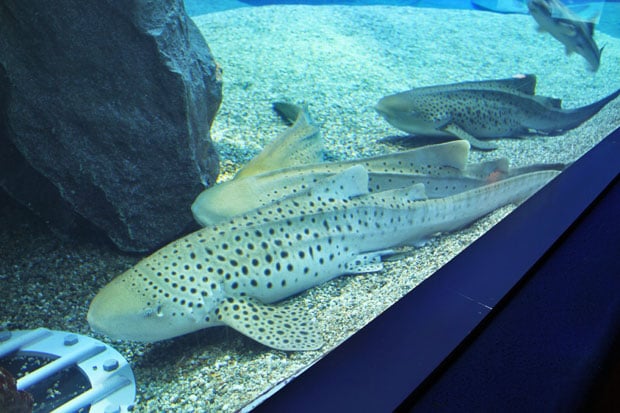 One of the smaller perimeter tanks housing one of my favorite types of seafood, squid! 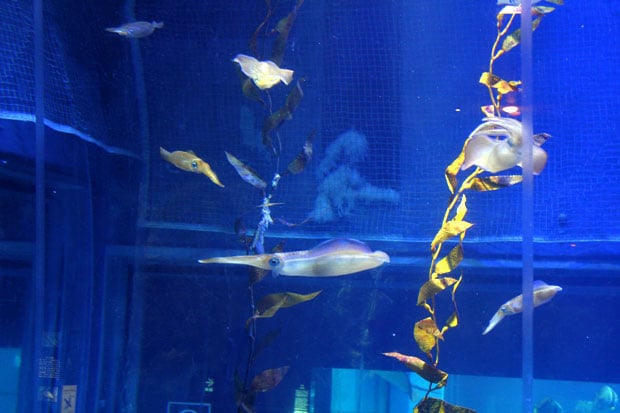 Ocean sunfish, Mola mola. The heaviest known bony fish, these strange-looking creatures can grow up to 11 ft and 5,000 lbs. 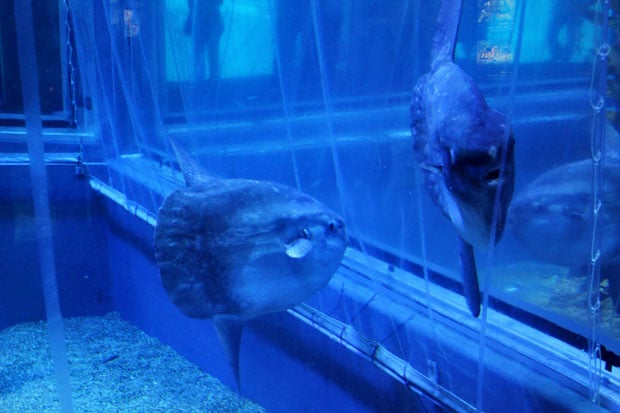 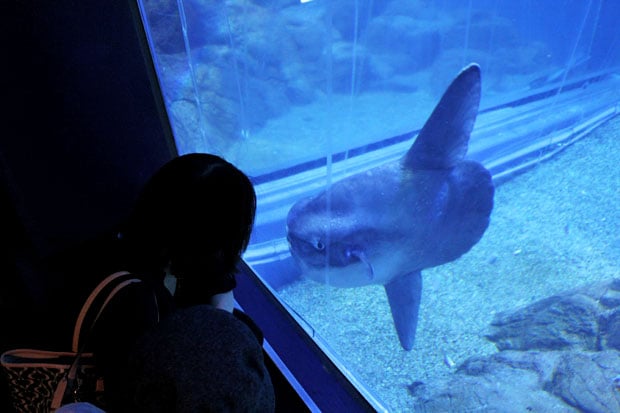 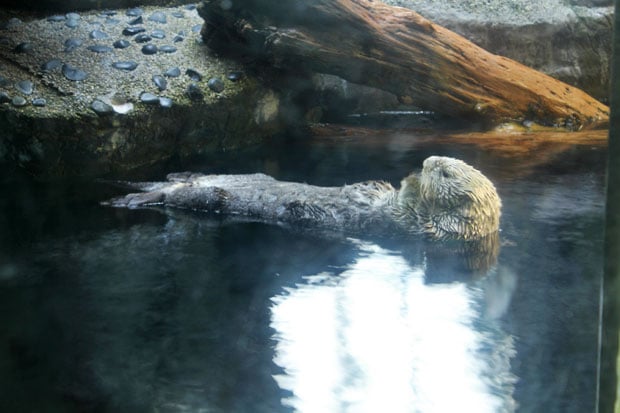 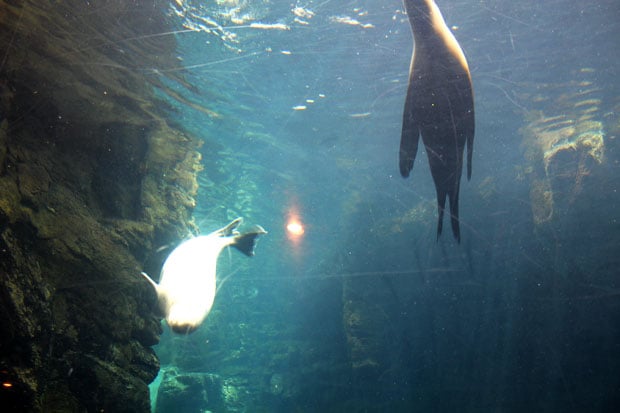 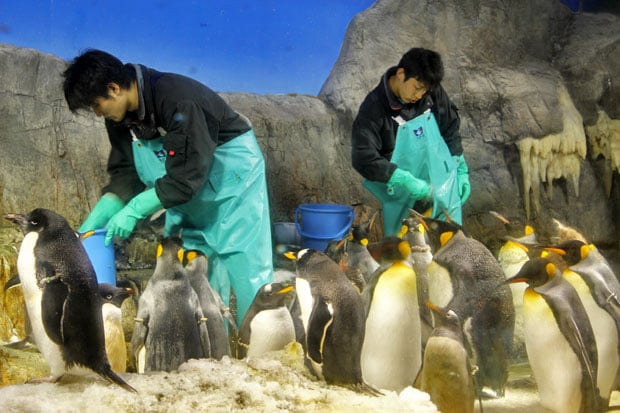 Olive ridley sea turtle, Lepidochelys olivacea. Like the dolphins, I didn’t think these guys were housed in a big enough enclosure. 🙁 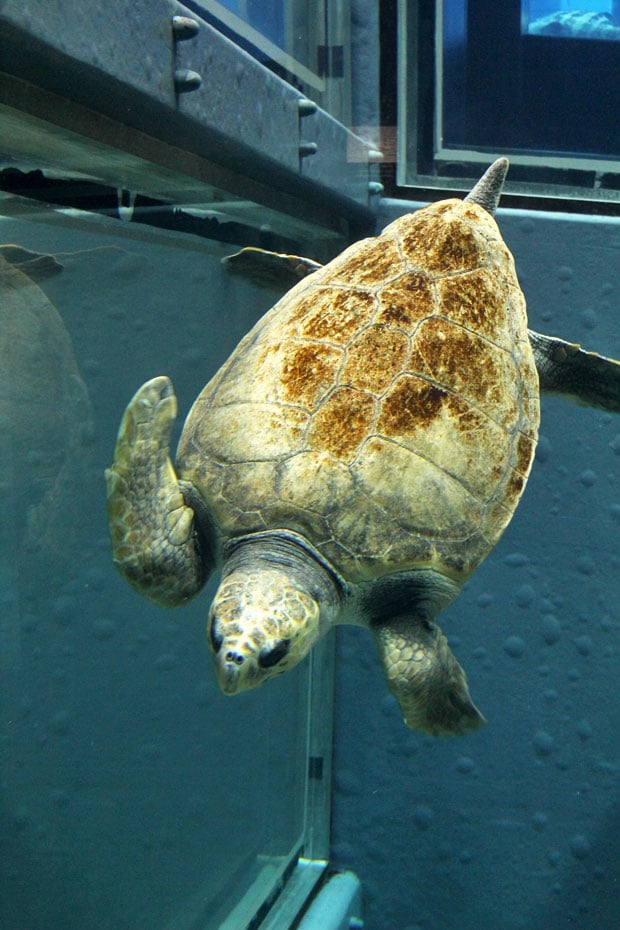 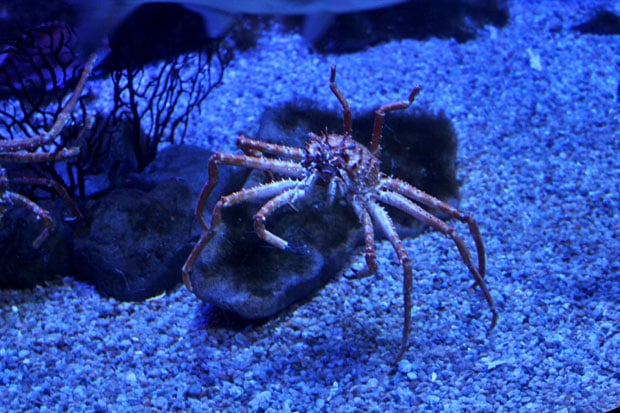 My favorite part of the aquarium, the jellyfish exhibit. So beautiful! I would have been happy with an exhibit filled with just jellyfish and seahorses. 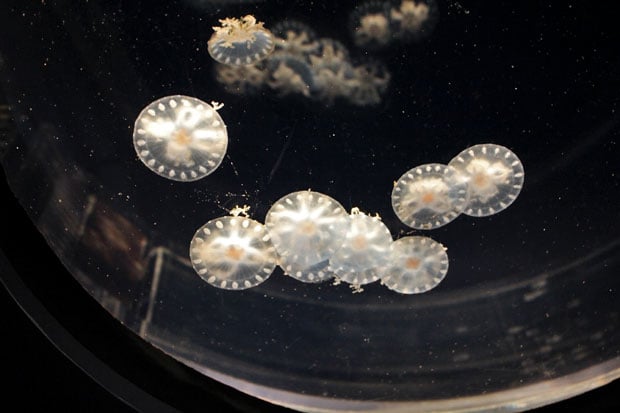 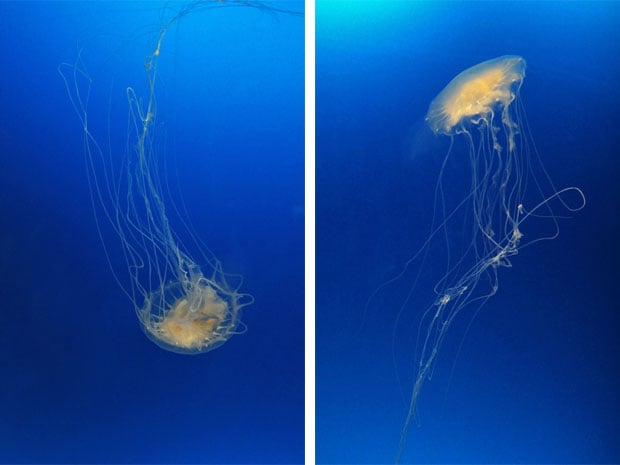 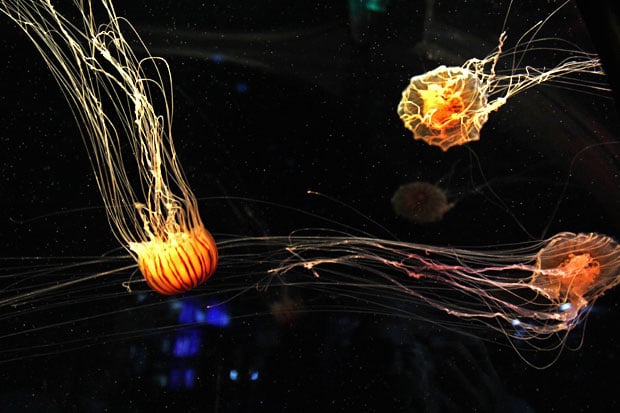 These little guys were cute. 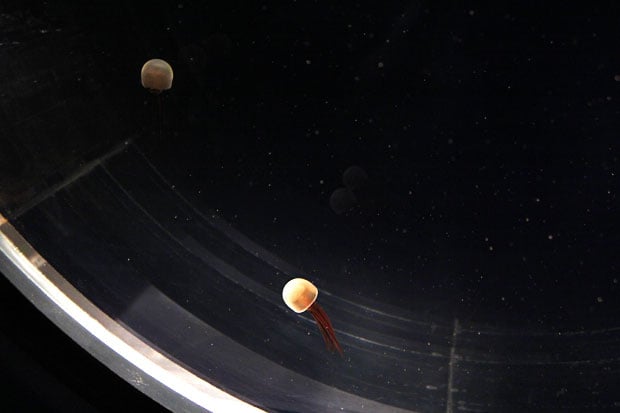 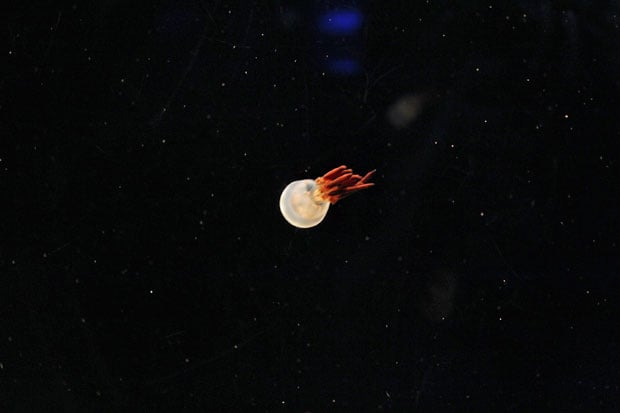 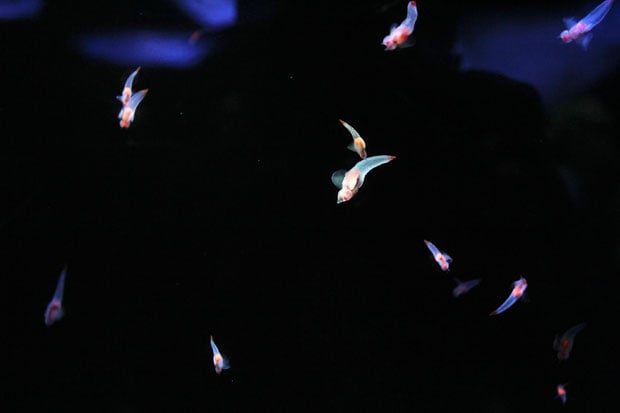 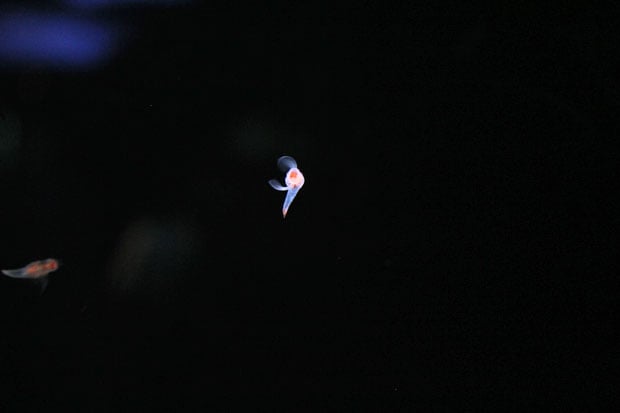 Aren’t they adorable? Like little undersea Teletubbies, each one was just a few millimeters long. 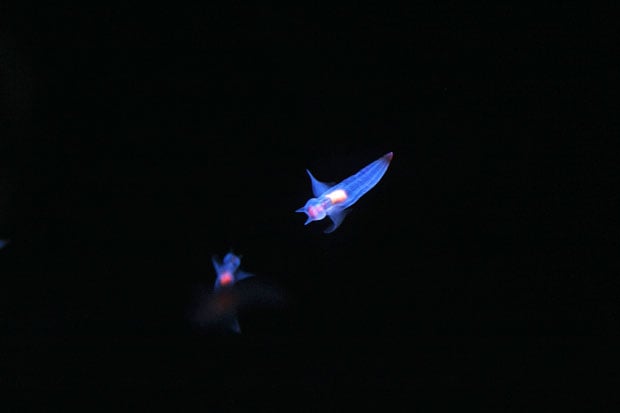 Leopard whipray, Himantura leoparda, at the petting pool. I can’t imagine hundreds of oily, grubby human hands being too good for their sensitive skin, noh? 😕 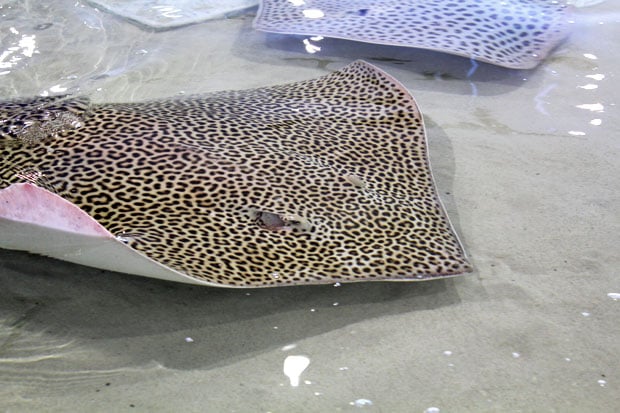 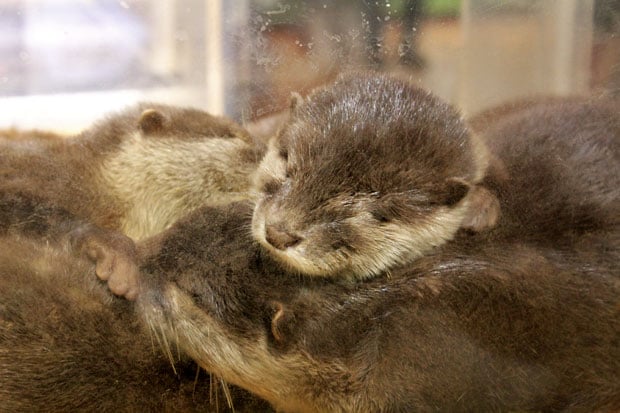 You’ll notice that there are no pictures of the dolphins I mentioned up top. I was disappointed to find them here so I wasn’t keen on taking their pictures. This may be one of the world’s largest aquariums, but their tank still wasn’t big enough. Dolphins can swim up to 100 miles per day hunting and playing, so no tank on earth can possibly provide them with enough space to facilitate their natural behaviors.

There’s a growing number of people in the world who are against keeping cetaceans in captivity, and I’m one of them. Dolphins aren’t fish. Like us, they’re highly intelligent mammals that live in complex social groups. Keeping them in undersized aquariums like this is inhumane and something that we really shouldn’t be doing anymore.

Dolphins aside though, I thought that the rest of the aquarium was pretty decent. It’s big, with many exhibits to see, so you can easily spend a couple of hours here. The jellyfish display was the best part for me. It would have been nice to see the whale sharks too, but I’ve swam with them before in Donsol and Oslob so I wasn’t too disappointed.

Looking back at that Donsol experience, I realized that in most cases, interacting with animals in their natural environment really is the best way of appreciating them.

For anyone interested, the Tempozan giant ferris wheel is next door to the aquarium. For ¥800, you can hop on this 17-minute ride that boasts a wheel diameter of 100 meters (330 ft) and an acrophobia-inducing maximum height of 112.5 meters (369 ft). No thanks! 😯 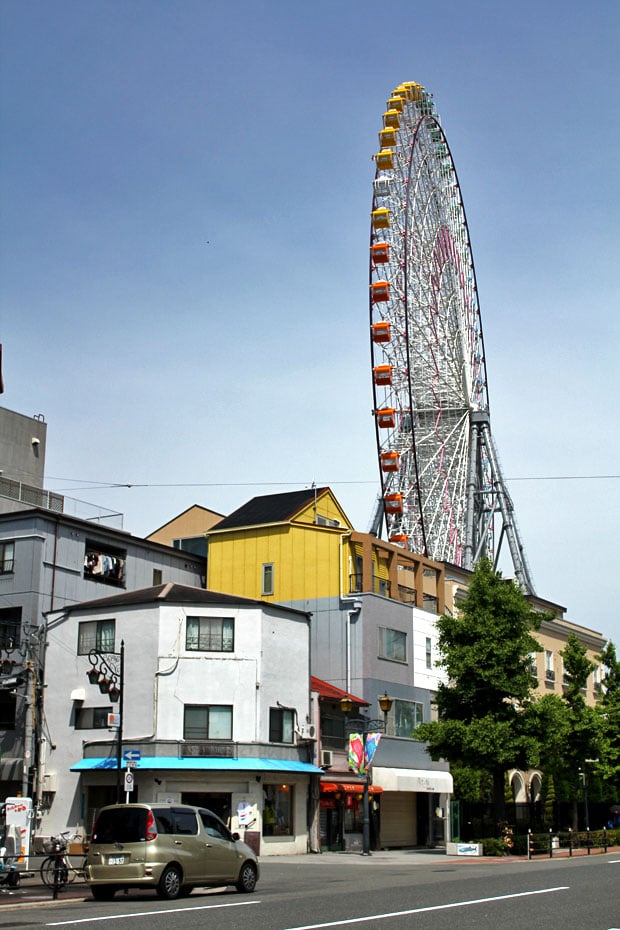 HOW TO GET THERE:
Take the Chuo line towards Cosmosquare and get off at Osakako station. It’s a five-minute walk to the aquarium from here.CLICK HERE for more information.

Would you recommend that we go on day tour to Kyoto-nara by ourselves (4 adults).? I searched japanican Kyoto-nara package tour and most comments are limited time. Rush activities including lunch. As first timers, would it be advisable to join in a tour instead? thanks. elen

Hi Eleanor, it's pretty easy to go to Kyoto and Nara from Osaka. I don't think it'll be a problem going by yourselves as long as you're comfortable taking public transportation. You'll probably have to do a lot more walking though as many attractions are spread out.

Hi JB Great!!! Will sure consider your recommendations. Hey, thanks for the quick reply. :) Very much appreciated.

Hi JB Great info here. I find your blog very helpful. We've booked our Osaka trip this November. We will be staying at Hotel Fino, Osaka. Browsing through a couple of websites, still into organizing an itinerary . Hope you can share some info here. We plan to do the following. Day 1: Arrival ( 4 pm ETA at hotel) Day 2: Universal Studios (whole day right?) Day 3. Kyoto Day Tour ( we plan to booked package tour here. Is this feasible?) Day 4: Osaka Tour (any suggestion on places to visit enough for 1 day) Day 5: Departure Kansai Airport ( late afternoon but still have free time to roam around in the morning)

Am I on the right track for a good itinerary?

Your itinerary is looking great Elen! You can book a Kyoto day tour from Osaka. Here are a few options from Kkday (listed in orde rof my personal preference):

As for Osaka, it all depends on what you want to do. Personally, we had an awesome time just exploring Dotonbori and Shinsaibashi. Kuromon Ichiba Market is nearby which offers great seafood for relatively cheap. You basically have one and a half days which is a lot of time. Other than the above, you can visit the aquarium and Osaka Castle too.

We're planning on doing this Go Kart tour in Tokyo later this year, but I didn't realize they offer it in Osaka now as well. It looks super fun so I'd definitely do that.

Hope that helps and enjoy your trip to Japan! :)

Hi JB, I'm really glad I chose to read your blog out of all the other links I came across on google. Everything you wrote about for a first timers guide to Osaka and Kyoto will be really helpful in planning my first overseas family vacation in April, 2018. I also share the same views about animals held in captivity, unless they're being well taken care of and have enough space to be comfortable, but I would still like to take my son there to show him the types of aquatic animals Japan has. Do you know if any of the enclosures have changed recently? Like if they have made the dolphins tanks bigger or something like that? If not, I could always educate my son with a first hand experience on ?-py animal enclosures.

Hi Kanani, happy to hear you found the guides useful! We haven't been back to the aquarium since then but I doubt they've made any changes. It seems too big an endeavor to do so. I just wish they stopped keeping dolphins in captivity. It mars an otherwise great experience but yes, I think it would be a good opportunity to teach your son about the plight of dolphins. Thanks for stopping by and enjoy your trip to Japan! :)

Loving your writing and insight. You've been invaluable in planning out my Kyoto and Osaka trip. I do want to mention that your reasons for being against dolphin captivity applies to whale sharks, mola molas and a whole host of other species, as well. These creatures are not sedentary/territorial animals, and were meant to swim the ocean currents. There are aquariums worldwide that keep these animals in captivity with a genuine basis for scientific study. I have yet to see a single Japanese organization that falls in this category.

Thanks Russ. Happy you found the guides useful. :) I was disappointed at first for not seeing the whale sharks but I realize in hindsight it was for the best. No tank can possibly be big enough to allow their natural behavior. And thanks for letting me know about the mola molas. I did not know that. As much as I love Japan, their treatment of marine animals leaves a lot to be desired. Have a great trip!