You’d think that after two consecutive days of wildlife encounters at Sydney Aquarium and Taronga Zoo that I’d be sick to death of animals, right? If you did, then you really don’t know me very well.

Located just 45 minutes west from the heart of Sydney, Featherdale Wildlife Park was the first stop on our private charter tour to the Blue Mountains. For a relatively reasonable AUD 27 per adult, we got to tour their 7-acre facility which contains some of the friendliest kangaroos and wallabies in Sydney, along with a slew of other native mammals, birds, and reptiles.

To top it off, here we also got to experience something that anyone who loves cuddly would be sure to treasure. It was a once-in-a-lifetime experience that made our Australian vacation truly complete. Scroll to the bottom of this post to see what I’m talking about. 😉 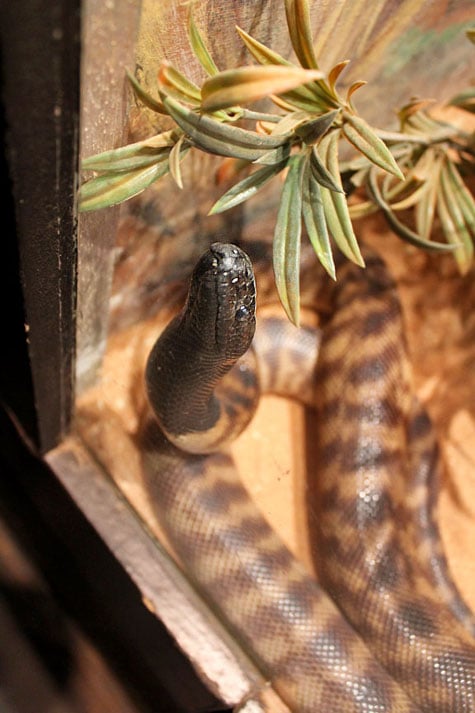 Olive Python – Liasis olivaceus – One of the largest snakes in Australia, the olive python grows to an adult length of over 4 meters and weighs in at over 18 kg. 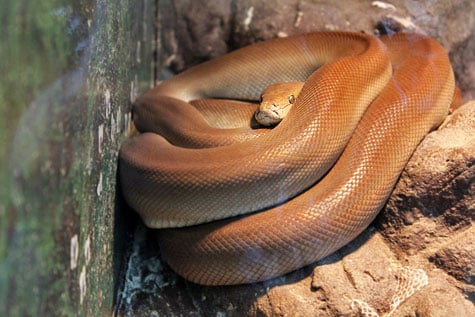 Perenti – Varanu giganteuos – Australia’s largest lizard and the fourth largest in the world, the Perenti is capable of taking down small kangaroos. Yikes! 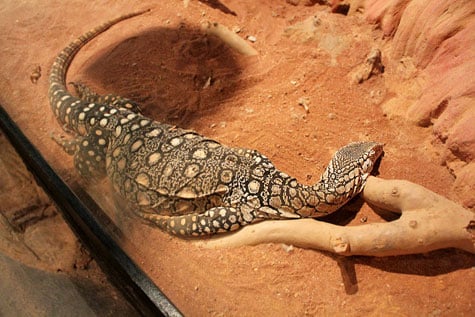 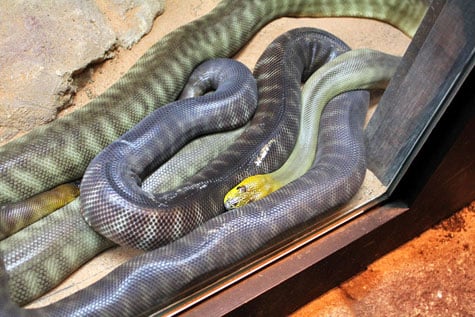 Common Goanna – Varanus varius – Also known as the Lace Monitor, the common goanna is the second largest lizard in Australia behind only the Perenti. They lay their eggs in termite mounds and come back months later to free the hatchlings. 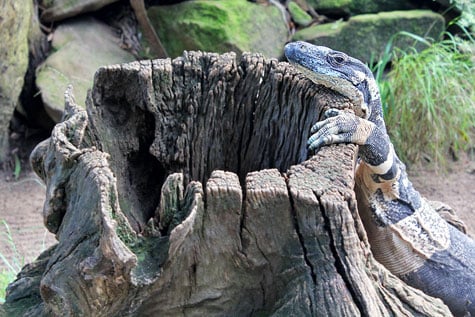 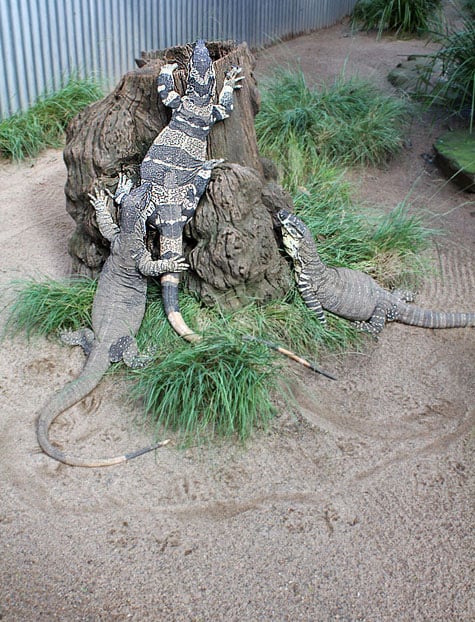 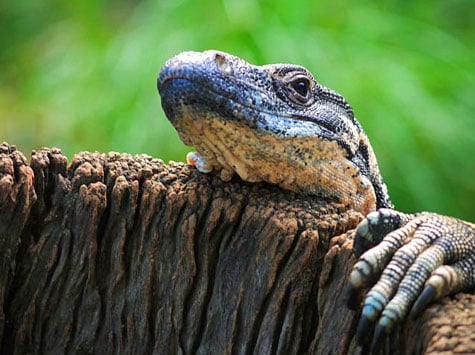 I don’t know what type of birds these were, but they were really cool. They were comical-looking and reminded me of Jack Lemmon and Walter Matthau in those “Odd Couple” films. 😆 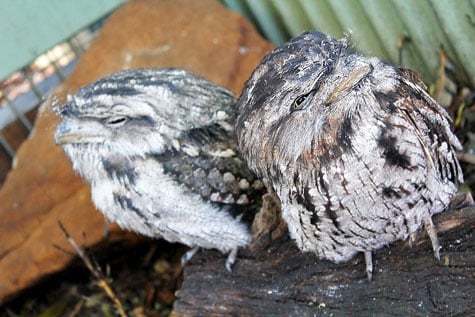 Awesome collection of birds. I’m no expert, but the one in front looks like some type of kingfisher. 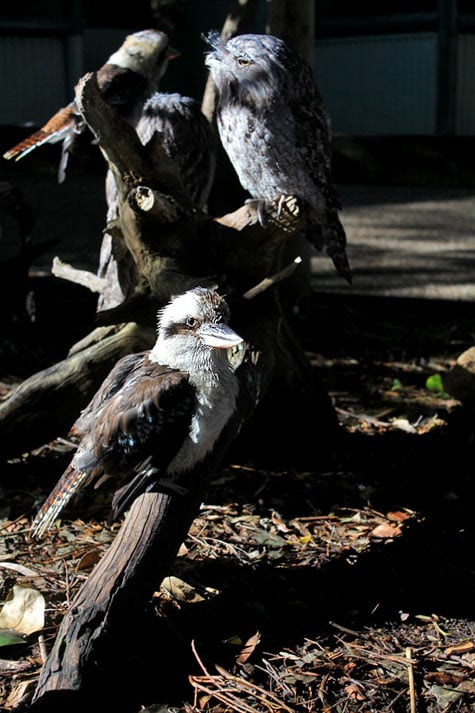 A hen and her eggs. 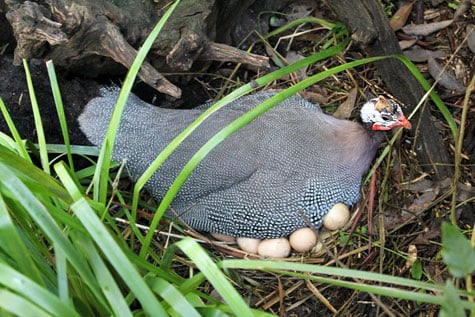 Wombat – I’m not sure what type of wombat this was, but a Google search seems to indicate that it’s a southern hairy-nosed wombat (Lasiorhinus latifrons). Cute little bugger. 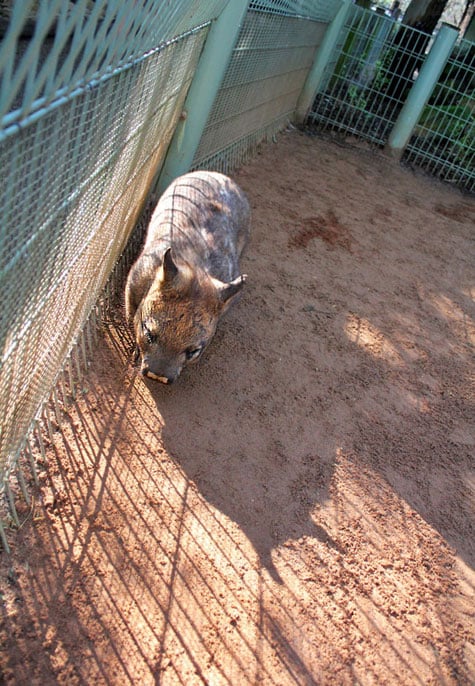 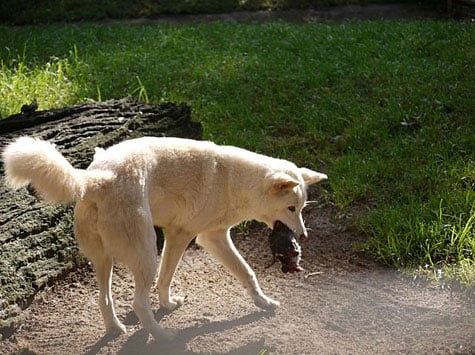 Flying Fox – Again, I’m not sure what type of flying fox this was but a Google search tells me that it’s a little red flying fox (Pteropus scapulatus). Though the smallest of the flying foxes native to Australia, it’s still considered a large fruit bat and can be found in large groups of up to a million individuals. 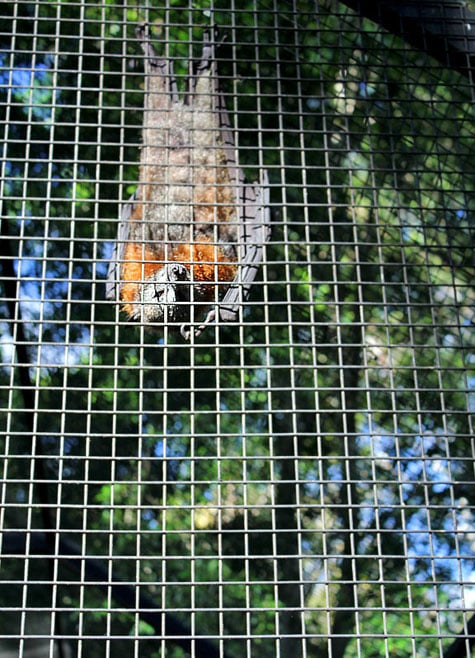 Look into my eyes… 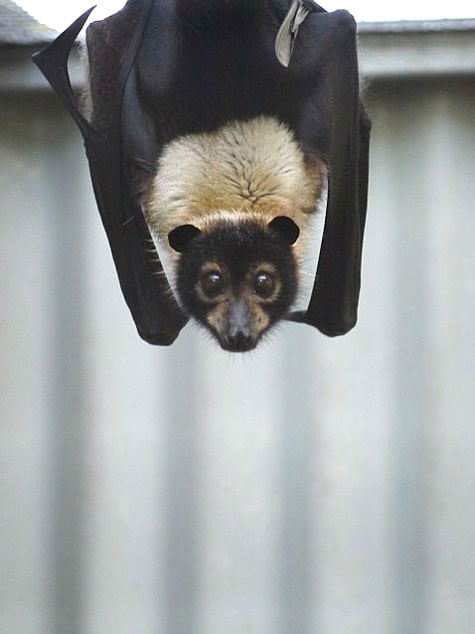 One of our favorite parts of the trip. For only AUD 1 per cone, you can hand feed the kangaroos and wallabies. This was loads of fun, though some of them can get a tad aggressive and physically snatch the cone from your hands. 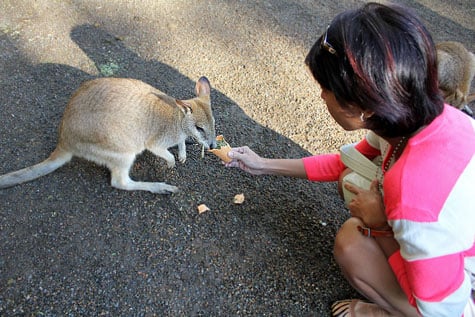 According to our guide, the story of how kangaroos got their name goes something like this:

The first European settlers were traveling through the bush with a few bushmen as their guides when they spotted these strange, hopping creatures for the first time. Excited, they screamed “What animals are those?!” The bushmen, not understanding a word of English, answered “kangaroo”, which in their language means “I don’t know what you’re saying.”

Hee hee. Accurate or not, it’s a great story, right? 😉 Here’s me amused by that story. 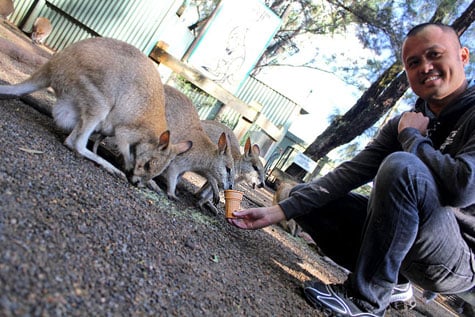 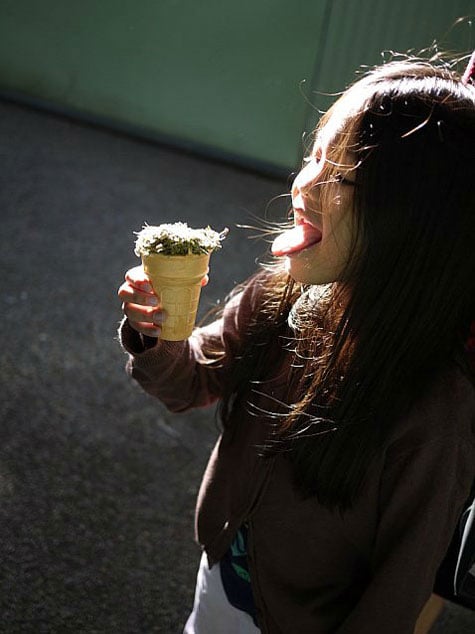 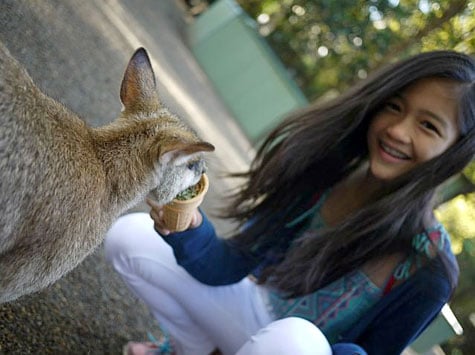 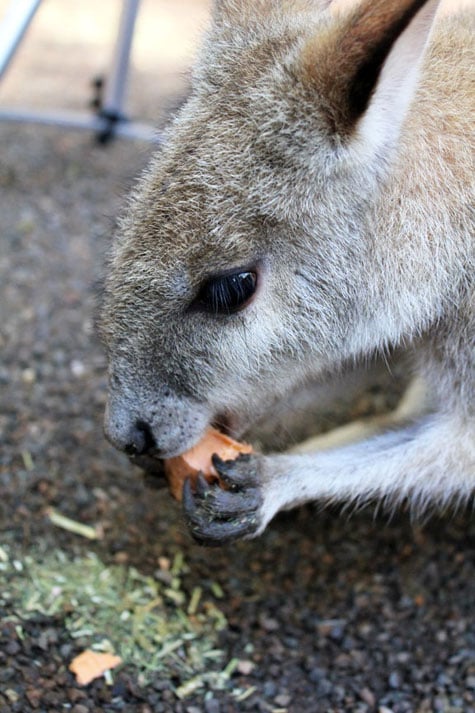 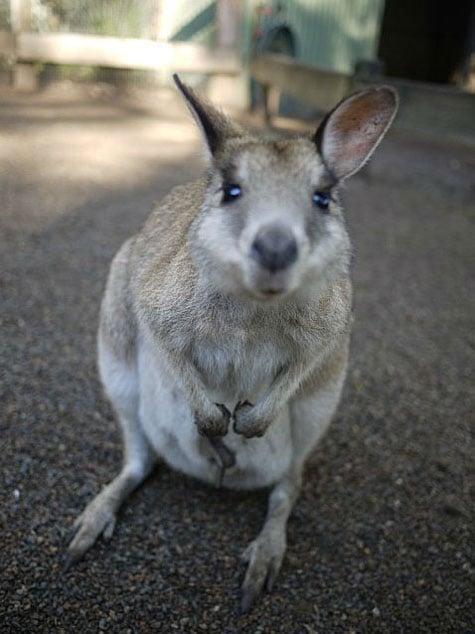 Eastern Wallaroo – Macropus robustus – The males of the species are black, the females are grey, so this white one must be gay. Just kidding, it’s an albino. Isn’t that picture of Ren nuzzling up with the wallaroo super cute? 🙂 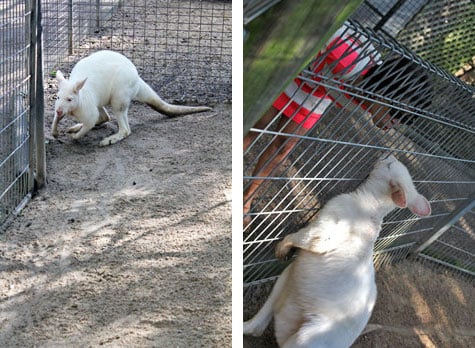 Tree Kangaroos – Yes, apparently some kangaroos are adapted for life in trees. Coolness. 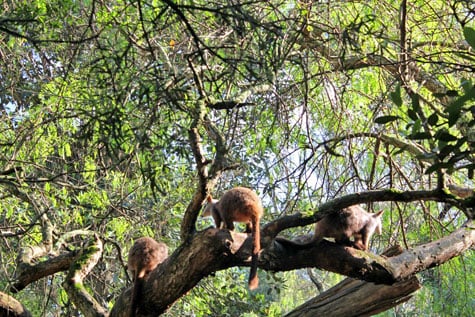 Self-portrait with marsupials. No, you can’t eat my shadow. 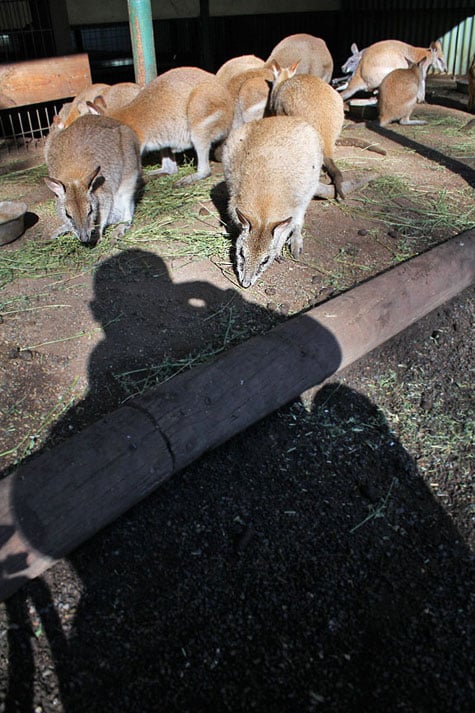 Koala – Phascolarctos cinereus – A beloved animal, the iconic koala, together with the panda bear, has got to be among the world’s most charismatic creatures. No way were we going to leave Sydney without an up, close and personal encounter.

Living almost entirely on eucalyptus leaves that are low in protein, high in indigestible substances, and contain phenolic and terpene compounds that are toxic to most species, koalas have a very low metabolic rate for a mammal, so they rest for about 16 to 18 hours a day, sleeping most of that time. This is why you frequently see them curled and wedged motionless between branches.

Our guide added that they’re probably a little high as well from all the toxins in the eucalyptus leaves. 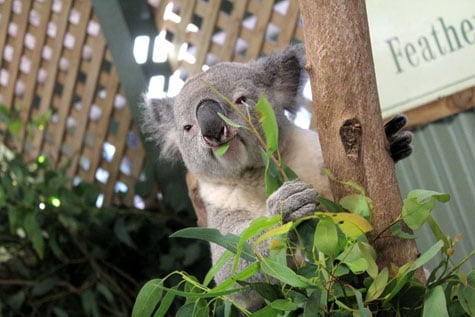 These little guys are just way too cute and cuddly. This one looks to be hallucinating. 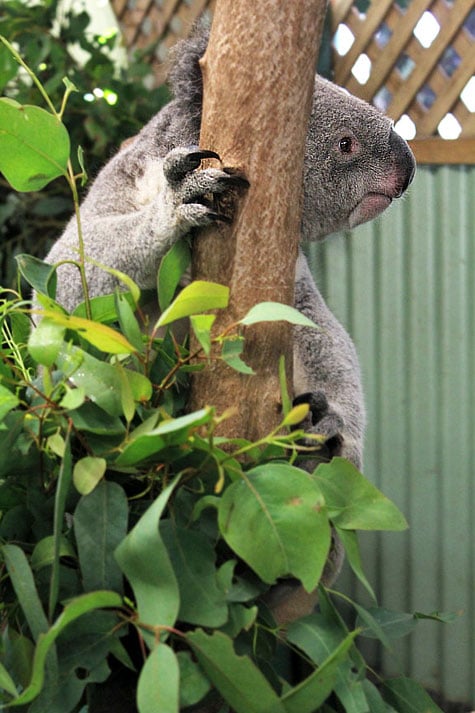 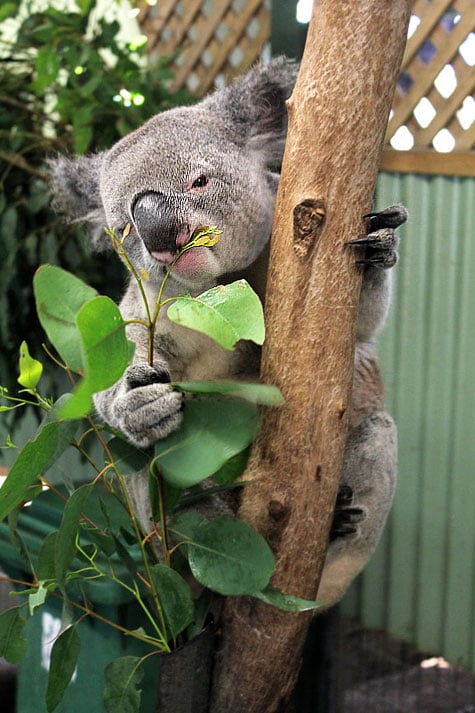 Petting the koala was definitely one of the highlights of my trip and an experience that I will never forget. Unlike Taronga Zoo that charges you an additional AUD 20 per person, the koala interaction comes free with your admission ticket here at Featherdale. 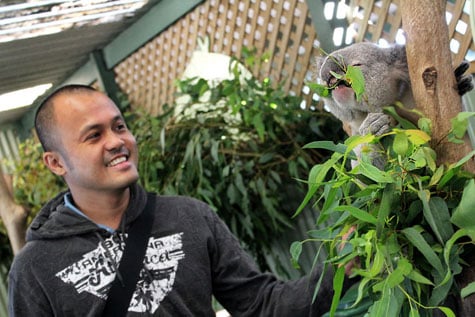 Ren too, though if there were a word bubble above this koala’s head, it would probably read “Why. is. this. human. touching. me.” 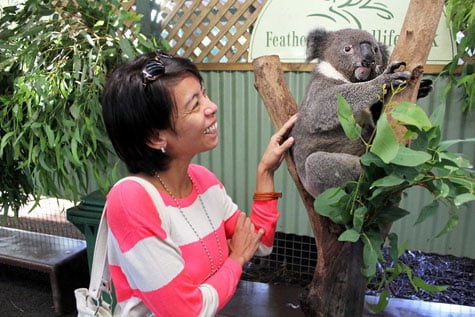 As cute as this koala was, the creature on the left is even cuter. 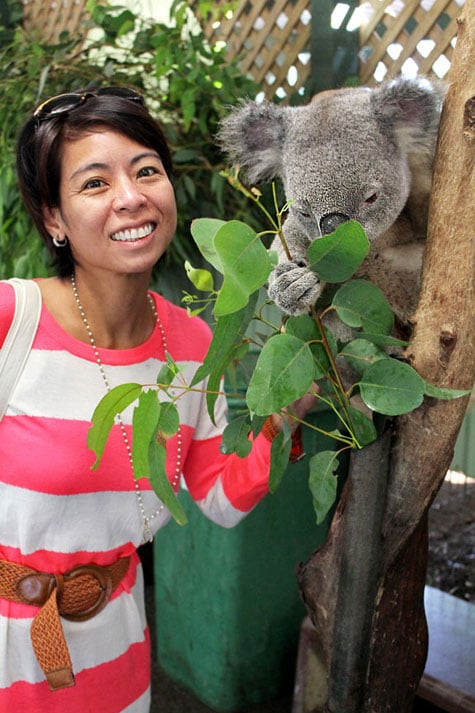 Sydney Aquarium, Taronga Zoo, Featherdale Wildlife Park. 3 consecutive days, 3 unforgettable animal sanctuaries, with the last providing the most memorable experience of them all. You can bet your life that this animal lover went home happy.

If you’re planning a trip to Sydney and would like to spend some time at Featherdale Wildlife Park, please visit their website for more information. You can prebook tickets there as well.

Hi Marianna! Did you like your picture eating the kangaroo food? :)