Food in Estonia: 12 Traditional Dishes to Look Out For

Posted on Last updated: September 23, 2021 By: Author The Traveleaters

EDITOR’S NOTE: Traveleater Kirke Mannik, a writer from Tallinn, shares with us twelve traditional dishes to try on your next visit to Estonia.

Are you familiar with Estonian food? Some travelers may have heard of verivorst or küpsetatud õunad but most people probably have little to no experience with the cuisine of this Baltic country.

Estonia is one of the least crowded countries in Europe. This former Soviet state in Northern Europe boasts beautifully preserved medieval castles, lush forests, and misty bogs and mires. It looks like a fairy tale come to life and offers plenty of sightseeing opportunities for first-time visitors.

But if you’re a Traveleater, then getting acquainted with Estonian cuisine is an absolute must. In this guide you’ll find twelve traditional Estonian foods to look for on your next visit to this beautiful country.

No time to read this Estonian food guide now? Click on the save button and pin it for later! 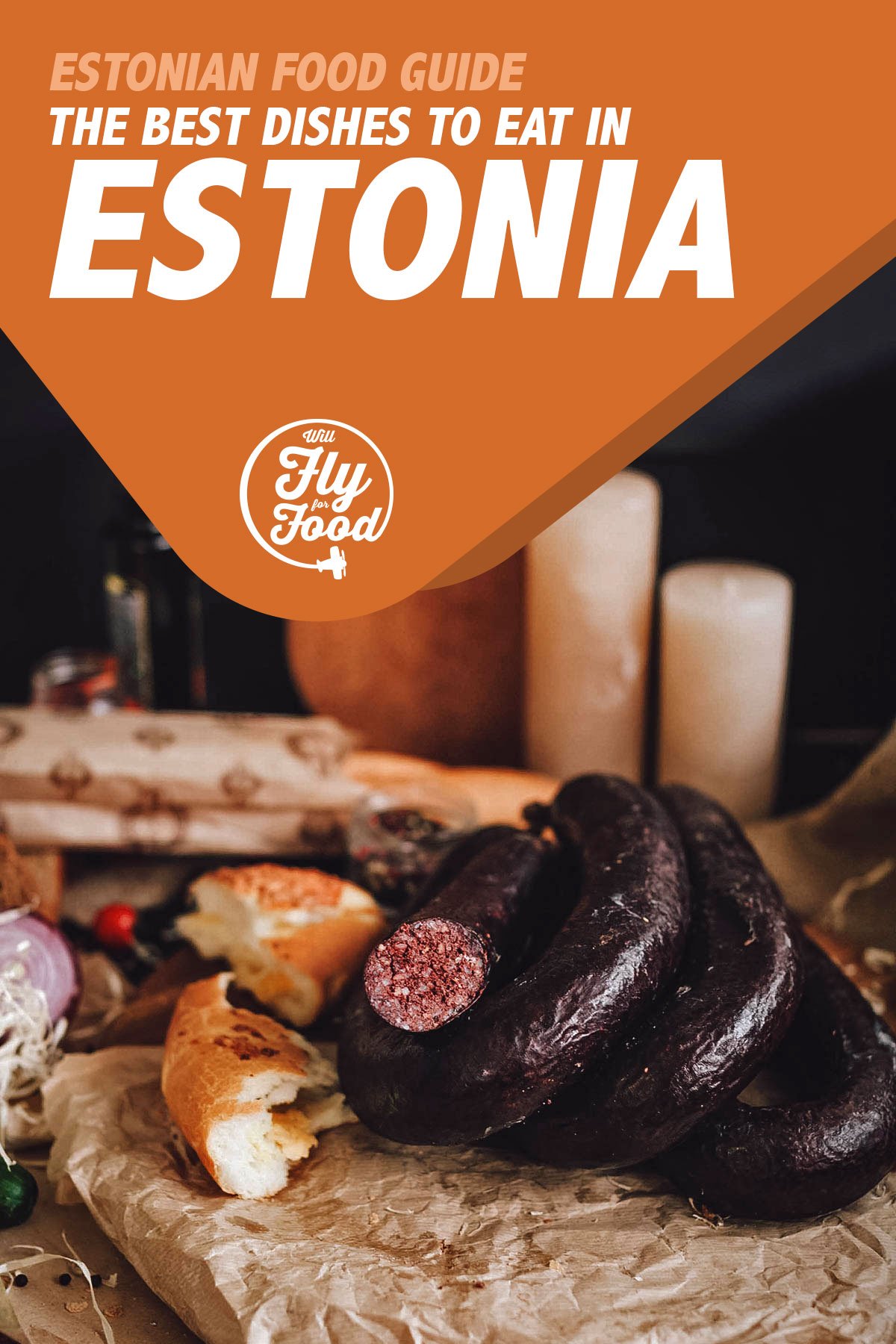 WHAT IS TRADITIONAL ESTONIAN FOOD?

Estonian cuisine has a long history. It’s founded on ancient cooking traditions and the freshest local produce, but it’s also been influenced by the cuisines of neighboring countries like Finland, Sweden, Russia, Germany, and Latvia. Rye bread, potatoes, and pork are staple ingredients in traditional Estonian cooking.

The eating habits of Estonian people have been historically related to the seasons. Estonia experiences long, dark, and snowy winters. As a result, food in the colder months tends to be heavier and more substantial as it’s meant to warm you up and get you through the winter.

In the summer, locals feed off of the sun and favor dishes that are lighter and fresher. Many summertime dishes are made with the freshest produce and vegetables, most of which are grown locally in home gardens.

THE BEST FOOD IN ESTONIA

Traveleaters with a taste for traditional local cuisine have these twelve dishes to look forward to in Estonia.

Eesti kartulisalat literally means “Estonian potato salad”. It’s one of the most popular traditional Estonian foods and is always served at parties, birthdays, and celebrations. It’s made primarily with vegetables that can be found in nearly every Estonian home’s garden – peas, carrots, potatoes, and cucumbers. Sausage, mayonnaise, and slices of hard-boiled egg can also added to the salad.

Eesti kartulisalat is easy to make which helps explain why it’s such a popular dish in Estonian cuisine. It’s rich, filling, and for most Estonians, associated with many delightful memories.

No party in this Baltic country can ever be held without this beloved Estonian dish!

Rosolje is a traditional Estonian food whose popularity dates back many decades, hitting its peak sometime between the 1930s and 1960s. Back then, no party could ever be complete without rosolje. Gradually, eesti kartulisalat supplanted rosolje in popularity because it was easier to make.

Rosolje is a purple salad made with boiled potatoes, beetroot, herring, and pickle. The salad often includes slices of hard-boiled eggs, meat, or apples. The various components are coated in sour cream, mayonnaise, and a mustard dressing that helps make rosolje the delicious purple Estonian dish that it is.

Estonians love barley and cabbage. Mulgikapsad is a mixture of sour cabbage and barley groats, with the occasional addition of chopped pork. The cabbage is stewed with other ingredients and only gets better the longer it stays in the pan.

Mulgikapsad is a centuries-old Estonian dish. As its name indicates, Mulgikapsad is from Mulgimaa, in the southern part of Estonia. It grew in popularity and eventually spread all across the country. By the end of the 19th century, it had become well-known in many other parts of Estonia.

Today, mulgikapsad can be found in almost every grocery store or supermarket. It’s more common for Estonians to buy it from stores than make it at home because it’s a time-consuming dish to prepare.

This traditional Estonian porridge has a long history. It was traditionally made with barley, potatoes, and meat, but modern versions of Mulgipuder can be made in different ways depending on the family and the region. Often, milk is added to make the porridge creamier.

Mugipuder is highly popular among Estonians. Large pots are used to make the porridge and it’s no secret that this beloved Estonian dish only gets better with time!

Like mulgikapsad, mugipuder is originally from Mulgimaa. Decades ago, animals were extremely important to the people of Mulgimaa. It’s said that Mulgipuder was given to animals first and anything left over was then passed on to the family.

Today, Mulgipuder is known for being cheap and nourishing comfort food in Estonia.

Kiluvõileib is a type of sprat sandwich. It’s a common Estonian snack that was popularized in the 20th century. It’s traditionally made with Estonian black bread coated with butter or munavõi (egg butter) and topped with slices of hard-boiled egg, onions, fresh greens, and of course the sprat itself.

Kiluvõileib is often served at parties and festive occasions and can also be found in many restaurants all over Estonia.  In 2014, the longest sprat sandwich was made in the old town of Tallinn, the capital of Estonia. That sandwich ended up being 20 meters (65 ft) long. It was set up on ten tables and was made by cooks from twenty central Tallinn restaurants and cafés.

Frikadellisupp literally means “meatball soup”. It’s a homey dish and probably the most popular soup in schools as it’s a favorite among children.

Frikadellisupp is made from vegetables and meatballs, its simplicity being a part of what makes it the beloved Estonian dish that it is. Vegetables and root crops like carrots, potatoes, peas, and onions are often used in the recipe. It’s the best served warm on cold rainy days, and trust me, in Estonia, rain occurs more often than not.

Verivorst is a traditional Estonian Christmas food. It is made from pig’s blood, barley, pork, and spices. The sausage was brought to Estonia by Swedes and Latvians at the beginning of the 19th century. Back then, people would make verivorst at home but these days, it’s more common to serve store-bought versions.

Verivorst is typically cooked in an oven or fried on a pan and is mainly eaten with cranberry jam, marinated pumpkin, and sour cabbage. This combination is always present on Christmas tables in Estonia.

Pirukas is a type of Estonian pastry made with a minced and spiced filling. When pirukas became popular among Eastern European countries in the 19th century, it didn’t quite catch on in Estonia. When it did finally become popular, the pastry was most commonly made from rye flour.

At first, the most popular pirukas were made from cabbage and salted fish. The fish was placed into the pastry in one piece and different types of fish were used in different parts of the country.

Nowadays, the fillings for pirukas vary greatly. Carrots (pictured below), turnips, and onions are often used. One of the most popular types is made with a mix of cheese and ham. The most common sweet pirukas is made from apples and cinnamon or rhubarb.

Kringel can be found at many parties and celebrations, often accompanying or replacing cake. This popular Scandinavian pastry is made from braided bread that’s shaped into a circle or a figure eight. Kringel can be either sweet or savory, making it either a main dish or a dessert.

Sweet kringel is classically filled with raisins and almonds and is topped with chocolate. However, many variations can be found.

Savory kringel is often cheesy and filled with ham, though more and more plant-based alternatives are being introduced into the market each year.

Kirju koer, means “colorful dog” or “spotted dog” and is a guilty pleasure among kids and adults. It’s a nostalgic Estonian dessert that’s near and dear to the hearts of many locals. It’s been known to steal the hearts of foreigners as well!

Kirju koer is made from classic vanilla-flavored biscuits, marmalade cubes, cocoa powder, butter, and condensed milk. The cookies are ground before being mixed with melted butter and the remaining ingredients. The dough is then rolled up into a big sausage or block and placed in the refrigerator to set overnight.

The following morning, children are excited to wake up early and taste this delicious Estonian treat. Many families have developed their own recipe, perhaps adding raisins, chocolate, or even rum.

Apples are the most popular fruits in Estonia. In autumn, during the apple season, many Estonian dishes are made from apples like apple jam, apple juice, and apple cakes. Küpsetatud õunad literally means “baked apples” and is a delicious and healthy addition to the list.

To prepare, apples are washed and hollowed out. They’re then filled with a mixture consisting of sugar or honey, raisins, cinnamon, and hazelnuts before being baked in the oven until hot.

A delicious Estonian dessert, küpsetatud õunad is just as popular on cold winter nights as it is on bright summer days.

Vastlakukkel is a type of sweet bun filled with whipped cream and jam and coated with powdered sugar. Who wouldn’t enjoy that? Also known as semla, it’s also popular in the cuisines of other Scandinavian countries like Norway, Finland, Denmark, and Iceland.

Vastlapäev is a Christian holiday celebrated at the start of a 7-week long fast before Easter. Although most Estonians don’t fast on this occasion, Vastlapäev is viewed as a fun day full of winter activities and good Estonian food.

After hours of sledding and skiing, vastlakukkel is something many Estonians look forward to. Cardamom, marzipan, and jam are often added to the bun.

Simply put, no one knows Estonian food better than a local, so what better way to experience the best of Estonian cuisine than by going on a guided food tour? A knowledgeable local will take you to the city’s best restaurants and markets and explain all the dishes to you in more detail. Check out Get Your Guide for a list of Estonian food tours in Tallinn and other cities throughout the country.

Estonians like their food simple and comforting. Because the region experiences long and cold winters, the food in Estonia is meant to warm you up. Estonian cuisine is very much seasonal. In winter, dishes are heavier while in summer, locals enjoy dishes made with fruits and freshly grown vegetables.

Speaking of vegetables, most dishes in Estonian cuisine are made with vegetables that are grown locally in home gardens. Estonians like their food fresh and local. Cooks don’t mind spending hours in the kitchen creating nurturing dishes to feed the whole family.

Before you experience the food in Estonia, it wouldn’t be correct of me to wish you bon appetit because that isn’t a phrase used in Estonia. Instead, locals say jätku leiba, meaning “may your bread last”, which in this case would be a lot more accurate.

Some of the links in this Estonian food guide are affiliate links. If you make a booking, then we’ll make a small commission at no extra expense to you. As always, we only recommend products and services that we use ourselves and firmly believe in. We really appreciate your support as it helps us make more of these free travel and food guides. Thank you!