Before arriving in San Miguel de Allende, we had spent four weeks in Puerto Vallarta, Guadalajara, Tequila, and Guanajuato City. Maybe we were too focused on street food stalls and taquerias to notice but up to that point, we had little idea how important coffee was to Mexican culture.

True coffeehouses – like the kinds you find in Hanoi or Saigon – didn’t seem all that common in the Mexican cities we had visited. We were making do with the cheap instant coffee we had been buying from our local OXXO, until we arrived of course, in San Miguel de Allende.

After spending the first couple of days in this gorgeous colonial-era city in Mexico’s central highlands, it became clear that coffee is indeed a thing in Mexico, and some of the best can be found right here in San Miguel de Allende.

Traveleating on your own is always fun, but if you really want to learn about the local cuisine, then it’s best to go on a guided food tour or join a cooking class. Check out these food tours and cooking classes in San Miguel de Allende.

No time to read this guide on the best coffee shops in San Miguel de Allende? Click on the save button and pin it for later! 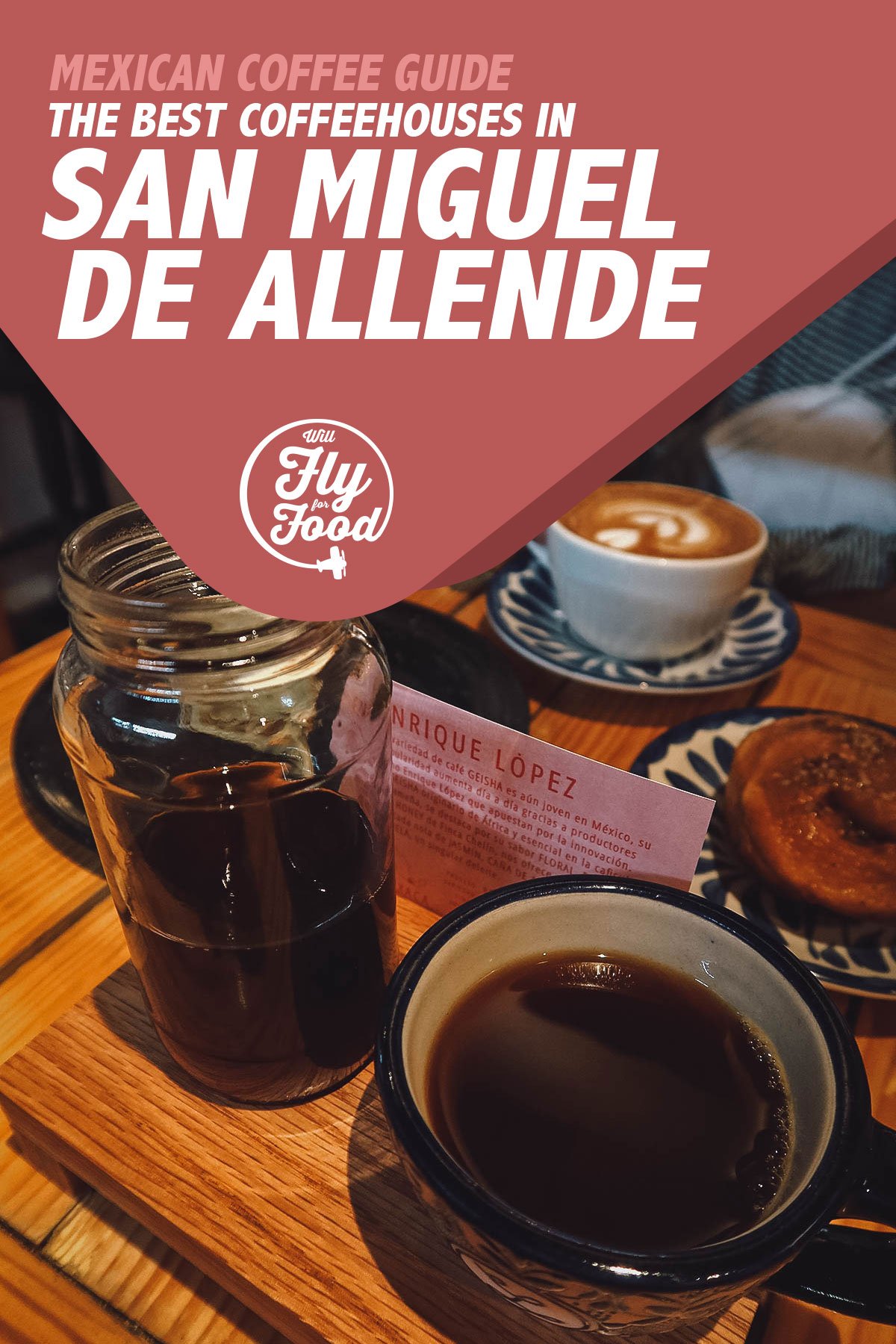 WHY IS SAN MIGUEL DE ALLENDE A COFFEE LOVER’S PARADISE?

Until I read this article on National Geographic, I didn’t realize that Mexico was a major coffee-producing country. I did some digging and according to the International Coffee Organization, Mexico is the 9th largest coffee-making country in the world, producing roughly 234,000 metric tons of coffee every year.

As I’d soon learn, not every major coffee-producing country in the world gets to enjoy the fruits of their labor. The majority of locals from top coffee producers like Ethiopia, Colombia, and Guatemala are priced out of the most valuable beans which are typically reserved for export. Mexico – particularly in affluent cities like San Miguel de Allende and Mexico City – is an exception.

In San Miguel de Allende, locals get to enjoy the world-class brews that their country produces. Explore the town on foot and you’ll find amazing local cafes on almost every block. Most coffee shops abide by a fair-trade ethos and source their beans ethically and responsibly, mostly from Oaxaca, Chiapas, and Veracruz – the three Mexican states known for producing the best coffee beans in the country.

According to the coffee shop owner and barista I had a long chat with, Lavanda Café is one of just two shops in San Miguel de Allende that serves coffee brewed from Oaxaca beans. Unsurprisingly, it’s also one of the most popular cafes in the city. There’s typically a half-hour wait so I suggest arriving early if you can.

Unlike some of the cafes on this list which serve only coffee, Lavanda serves delicious food to go with their excellent coffee. Lavanda is a popular breakfast and lunch spot with many offerings on their menu like waffles, poached eggs, baked goods, cakes, and Mexican favorites. Check out our San Miguel de Allende restaurant guide for more information.

As expected, Lavanda offers many different types of coffee, from espressos to cold brews to cups of joe infused with flowers. I had no idea what to get so I turned to our server for recommendations. She told us that they don’t serve super strong coffee but they do offer flavorful brews, one of the tastiest being a concoction they call the “Mexican Geisha”.

Here’s a shot of our server pouring me my cup of Mexican Geisha. It’s a type of pour-over black coffee that’s floral and fruity in flavor.

Don’t you just love the super cute presentation? The coffee cup and jar were served on a Japanese-like wooden tray with a card explaining the type of beans they use.

Renée wasn’t in the mood for something as frou-frou so she went with a standard cup of cappuccino. We enjoyed our coffee with a pistachio cinnamon bun and a slice of guava and dulce de leche cake.

If you want coffee on the go, then La Ventana is one of the best places to visit in San Miguel de Allende. As its name suggests, it’s a coffee shop that serves great coffee, mostly from a window on the side of a building. They do have indoor seating and a simple lunch menu with a few sandwich options, but most people just get coffee to go.

Here’s the window where you can order your coffee from. Entrance to the indoor seating space is around the corner.

National Geographic described Ki’bok Coffee as a “tiny café that serves some of the best coffee in the world”. Ki’bok, in a Mayan language local to Tulum, where the shop originated from, means “good aromas”.

Like Lavanda, Ki’bok is a lovely cafe that serves delicious food to go with their great coffee. It’s a popular breakfast and lunch spot that offers international dishes like pasta, hummus, quinoa bowls, and focaccia sandwiches along with traditional Mexican food like chilaquiles and enchiladas.

Pictured below are two cups of their Hemingway coffee. It’s their signature blend of Cuban cortado double espresso served with an infusion of brown sugar and topped with foam and powdered cinnamon. It was delicious and one of the best cups of coffee we had in San Miguel de Allende.

Ki’bok is located up the street from La Ventana. If you’re a digital nomad, then this is a great place to work. They have decent-sized tables and aren’t nearly as busy as Lavanda so you can work undisturbed for many hours. They have a nice covered rooftop seating area as well.

El Cafe de La Mancha is another cafe recommended by National Geographic. Located in a more residential neighborhood just outside the central tourist area, it’s a tiny coffee shop that offers almost a dozen ways to prepare your coffee.

With fancy names like Aeropress, V60, Chemex, and Origami, I was stumped on what to get so I asked the barista for recommendations. He suggested I get the Aeropress which is a modern, multi-step brew that culminated in him pouring the coffee from a beaker and into my cup. Fancy!

El Cafe de La Mancha makes good coffee but unfortunately, they don’t offer much in the way of food. They focus mainly on coffee so all they had at the time were some freshly baked cookies.

Luckily for us, El Cafe de La Mancha was located just a short walk from our AirBnB, so we could quickly pop in and get coffees to go.

As you can see from the picture below, El Cafe de La Mancha is tiny. The whole cafe basically consists of a counter, one table, and two small sofas with side tables. It’s a cute neighborhood cafe that seems to have a loyal following.

Like El Cafe de La Mancha, Zenteno Café is a tiny coffee shop with just three or four tables. We were here just for the coffee but they do offer light meals like sandwiches and quiche and have a decent selection of pastries, cakes, and various fresh breads.

Pictured below is my frothy cup of cappuccino brewed from Veracruz coffee beans. Zenteno Café makes great coffee, some of the best we had in San Miguel de Allende. They’re about a 5-minute walk from Parque Benito Juárez and make for a great stop to or from the park.

Similar to El Cafe de La Mancha, Zenteno Café seems to have a loyal following. One customer was on a Zoom call while other regulars would pop in for a chat with the baristas before taking their coffees to go.

This was our favorite coffee shop in San Miguel de Allende. This hidden gem located directly opposite the entrance to Ignacio Ramirez Market serves excellent coffee. We visited over ten of the most popular and recommended cafes in the city and this unassuming stall was our hands-down favorite.

Cafe 20 Trece serves gourmet coffee brewed from beans produced in Veracruz, Chiapas, and Oaxaca. When ordering my cup of joe, the owner asked if I wanted the strongest coffee or the best. I said the best so he proceeded to make me a cup of coffee brewed from Oaxaca beans. It was easily the best cup of coffee I had in San Miguel de Allende. It was balanced, it had body, and it wasn’t overly acidic or fruity.

This is what the Cafe 20 Trece stall looks like. They were barely three weeks open when I found them so they didn’t have a proper sign yet. It’s easy to miss so look for this stall opposite the entrance to Ignacio Ramirez Market.

I found Cafe 20 Trece by chance when I was looking for a cup of coffee shortly after sunrise. It was the first cup of quality coffee I had in Mexico so we spent the rest of our stay looking for something even better. We never found it.

Not only does Cafe 20 Trece serve great coffee, but it’s also the friendliest coffee shop we went to. Aarón, the owner, is a nice guy who genuinely loves what he does. He’ll gladly talk your ear off about all things coffee if you let him.

Address: Across the street from Ignacio Ramirez Market
Operating Hours: Opens at 8AM

Based on my conversations with Aarón, it seems that locally produced coffee is a source of pride only for some Mexicans. I asked him how many cups of coffee the average Mexican drinks and he said not enough. According to him, many Mexicans are happy with an average cup of coffee bought from the convenience store.

Coffee doesn’t seem to be a national obsession in Mexico the way it is in countries like Vietnam, but that’s something the coffee connoisseurs in San Miguel de Allende are rallying to change.

Some of the links in this article on the best coffee shops in San Miguel de Allende are affiliate links. What that means is that we’ll get a small commission if you make a booking at no additional cost to you. As always, we only recommend products and services that we use ourselves and firmly believe in. We really appreciate your support as this helps us make more of these free travel guides. ¡Muchas gracias!