It wasn’t the bombs that got me. Or the rubble and melted glass. Not even the articles of burnt clothing or pictures of the dead moved me as much.

It was the clock pictured above – its hands stopped at the precise moment of the blast – that made me feel the magnitude of that day. Twisted, destroyed, its face partly melted from the intense heat, I stood staring at that clock for several minutes before walking into the exhibit. Like many people, I had learned about World War II and the bombing of Nagasaki in school. I had read books and seen the documentaries but never did I get a sense of that moment as much as I did then. Looking at the hands of that clock sent chills down my spine.

Completed in 1996, the Atomic Bomb Museum is located near Nagasaki Peace Park and the Peace Memorial Hall. It’s open from 8:30AM-5:30PM and has three levels of exhibits. Admission is JPY 200 and you can rent audio guides in different languages for JPY 154. 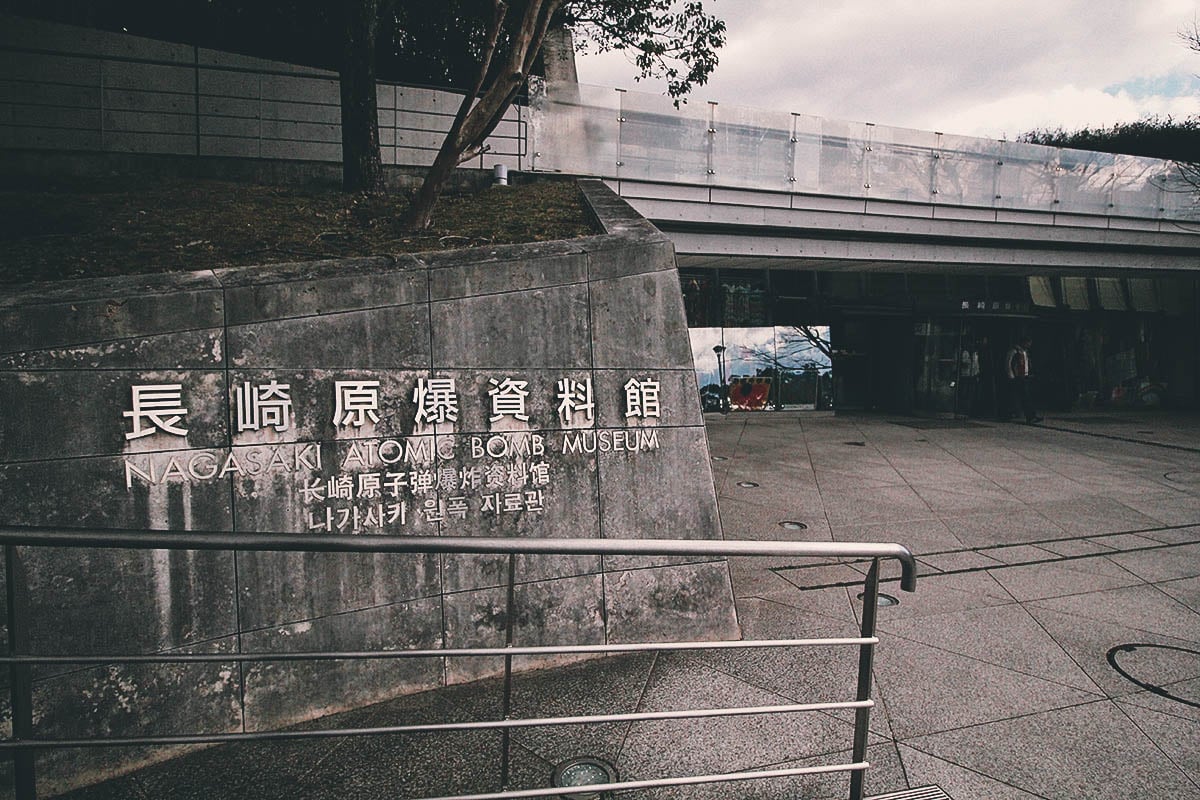 Here’s another picture of the clock. Destroyed with its hands preserved at the exact moment of detonation, it felt as if I were looking at a ghost. It was eerie. The clock was found in a house about 800 meters from the hypocenter. 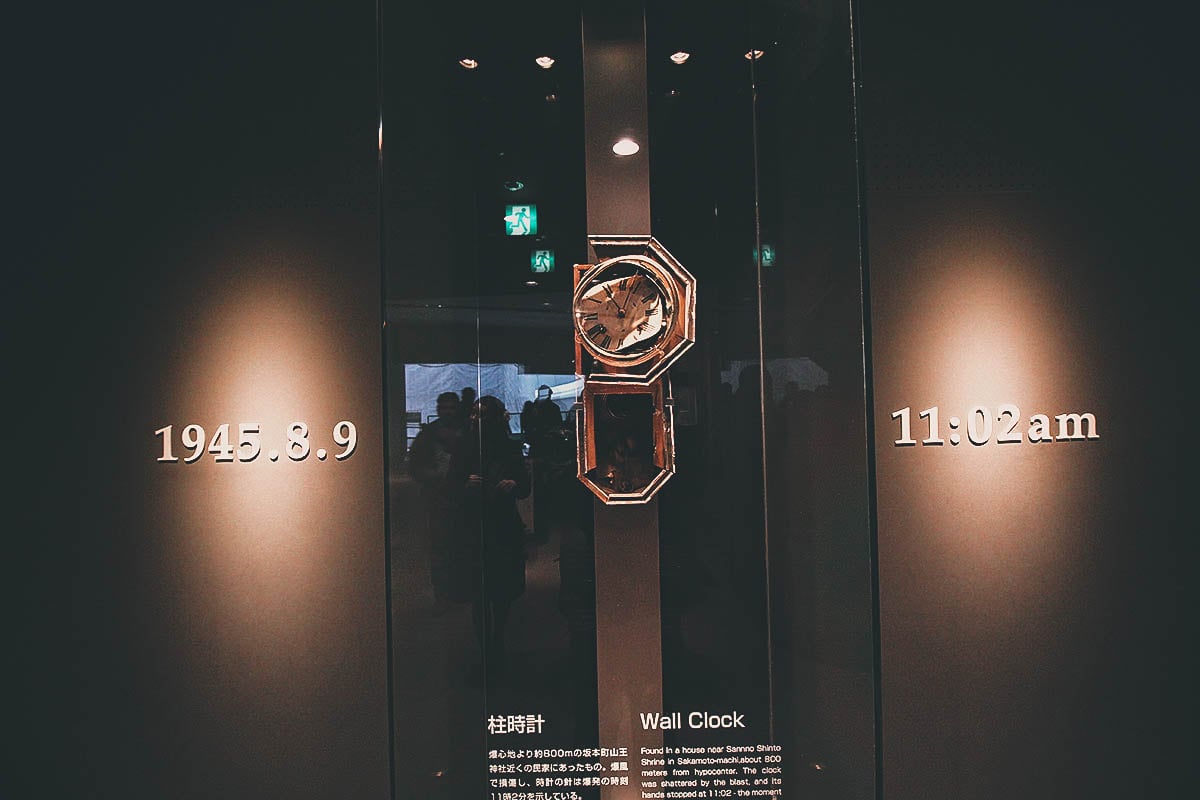 Here’s a bird’s eye view of Nagasaki pinpointing the bomb’s hypocenter. Near the museum is the hypocenter cenotaph pictured at the bottom of this post. 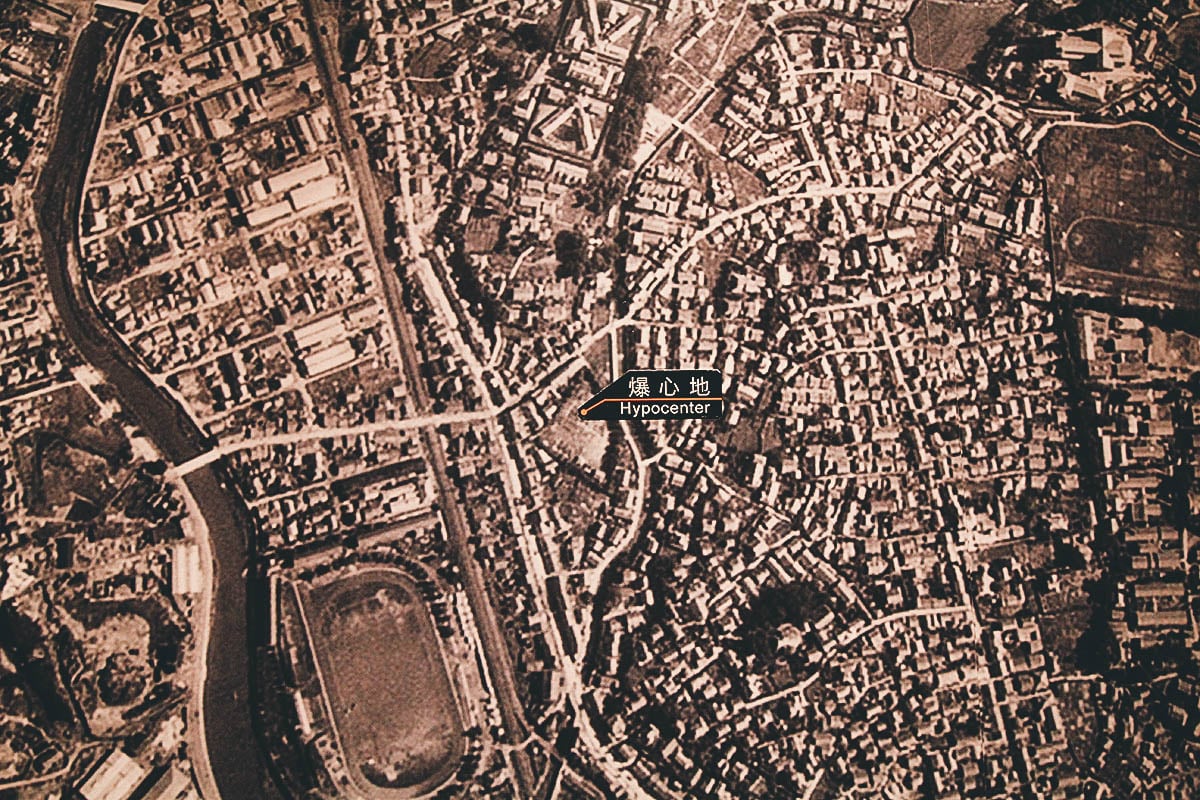 We started at the bottom and made our way up. If I remember correctly, this was a water tower that buckled from the heat of the blast. 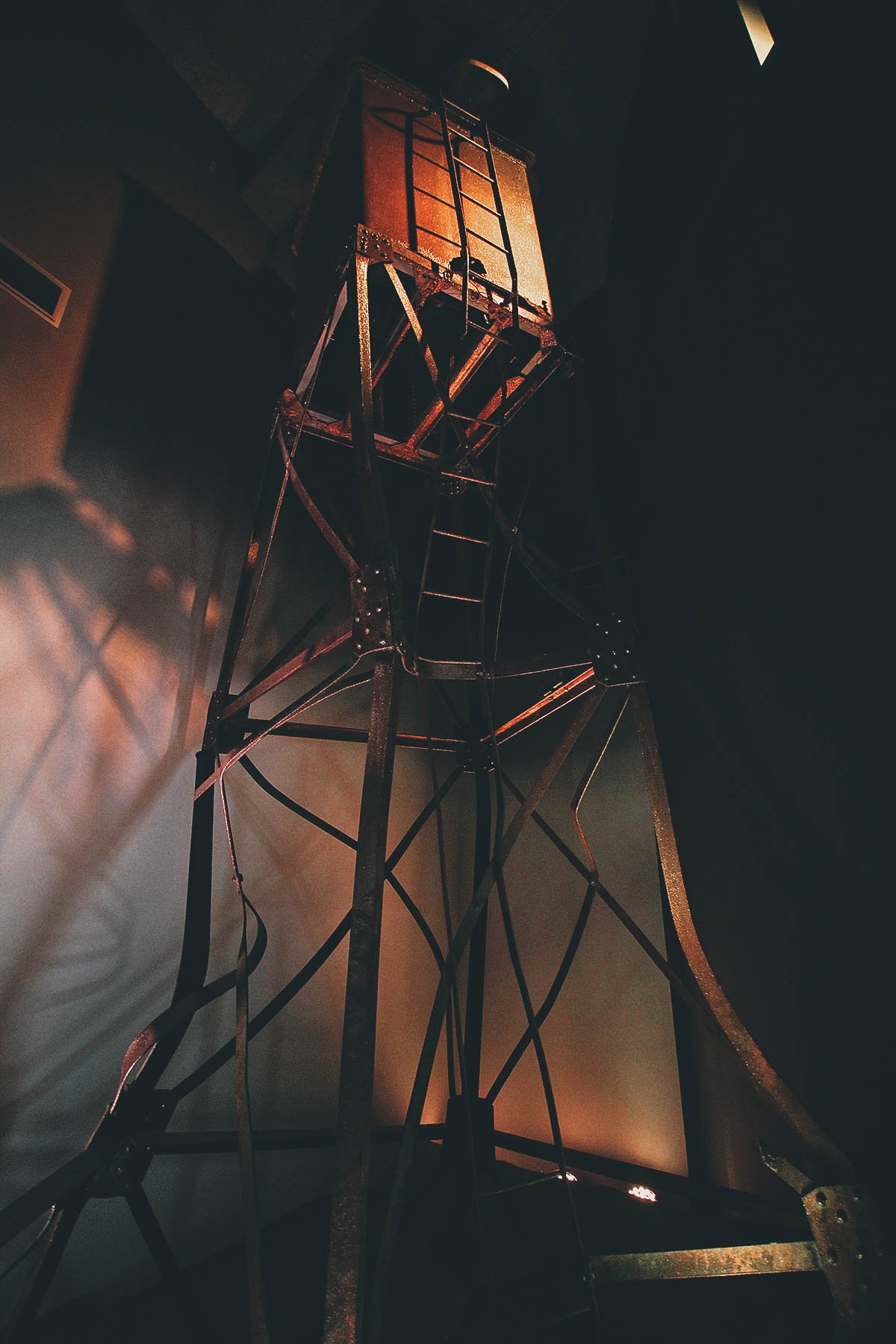 At the far end of the hall is a wall from Urakami Cathedral. The Cathedral was just a few hundred meters from the hypocenter so it was almost completely destroyed. It was rebuilt in 1959 but nearly everything that was left of the original structure is now here in the museum. 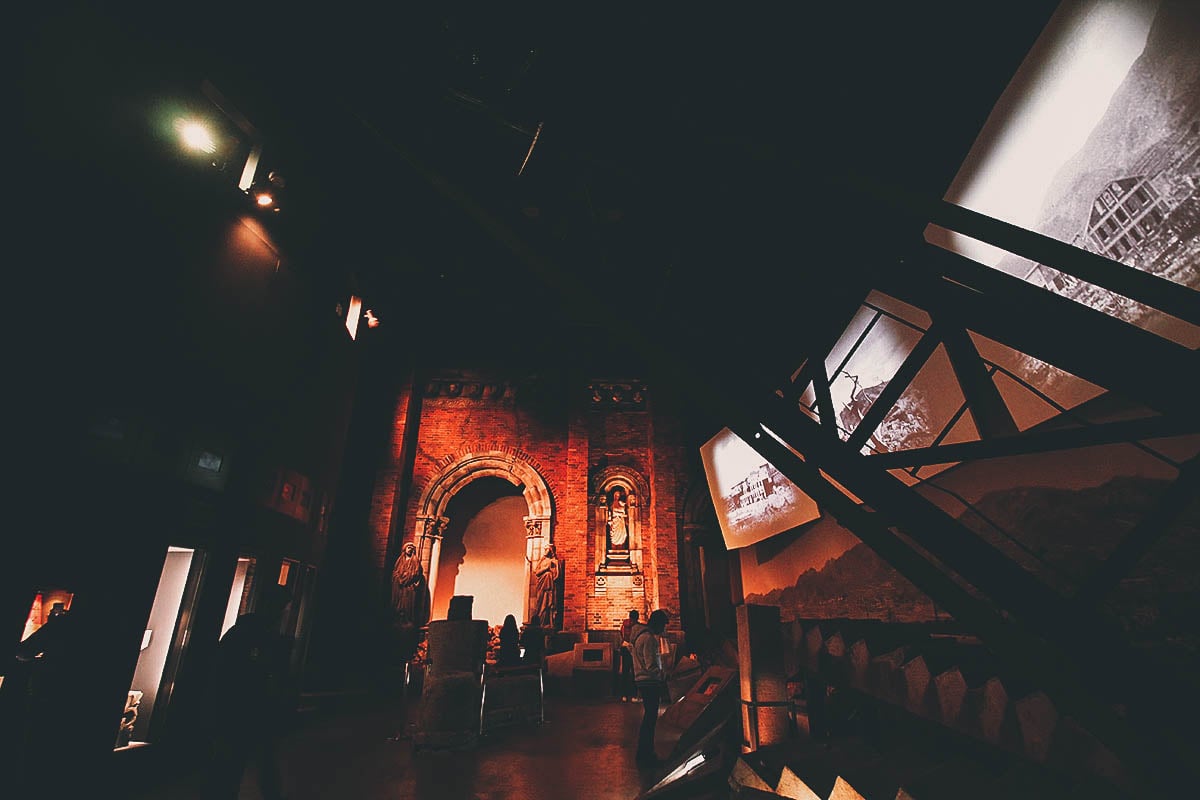 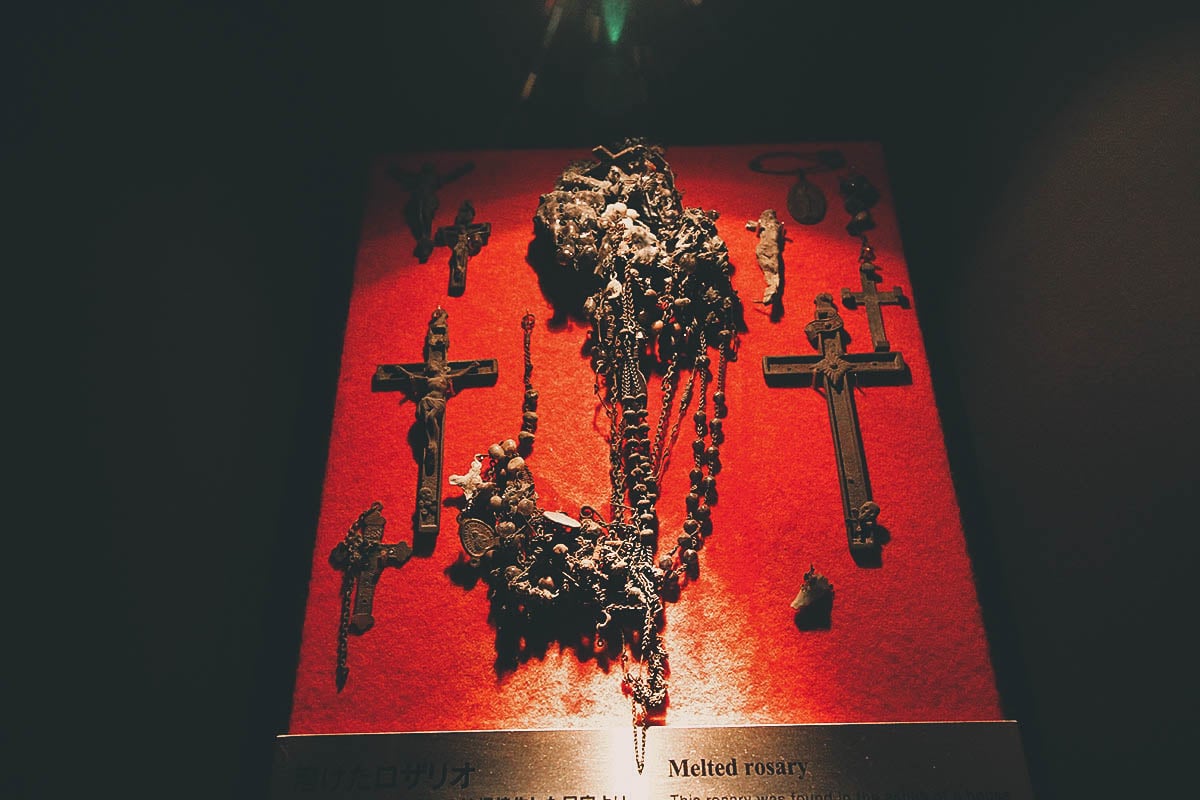 A closer look at the Urakami ruins 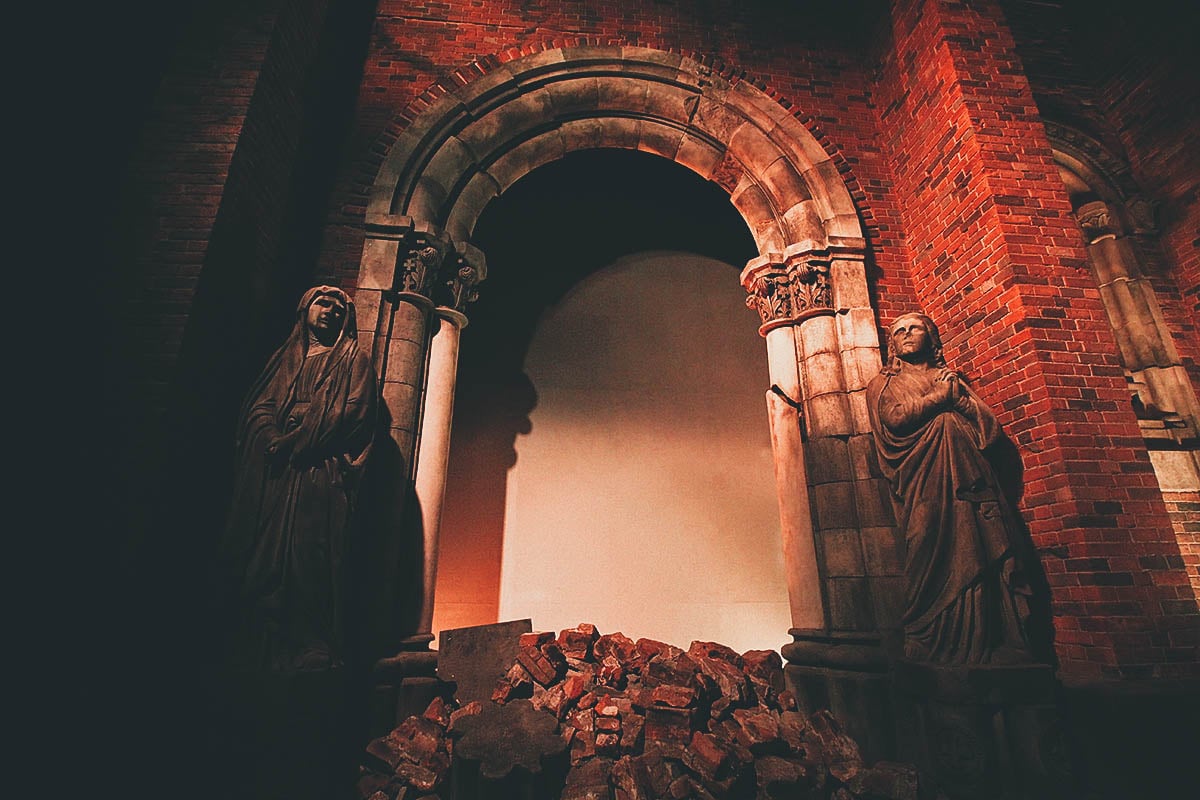 A replica of “Fat Man”, the bomb that devastated Nagasaki. 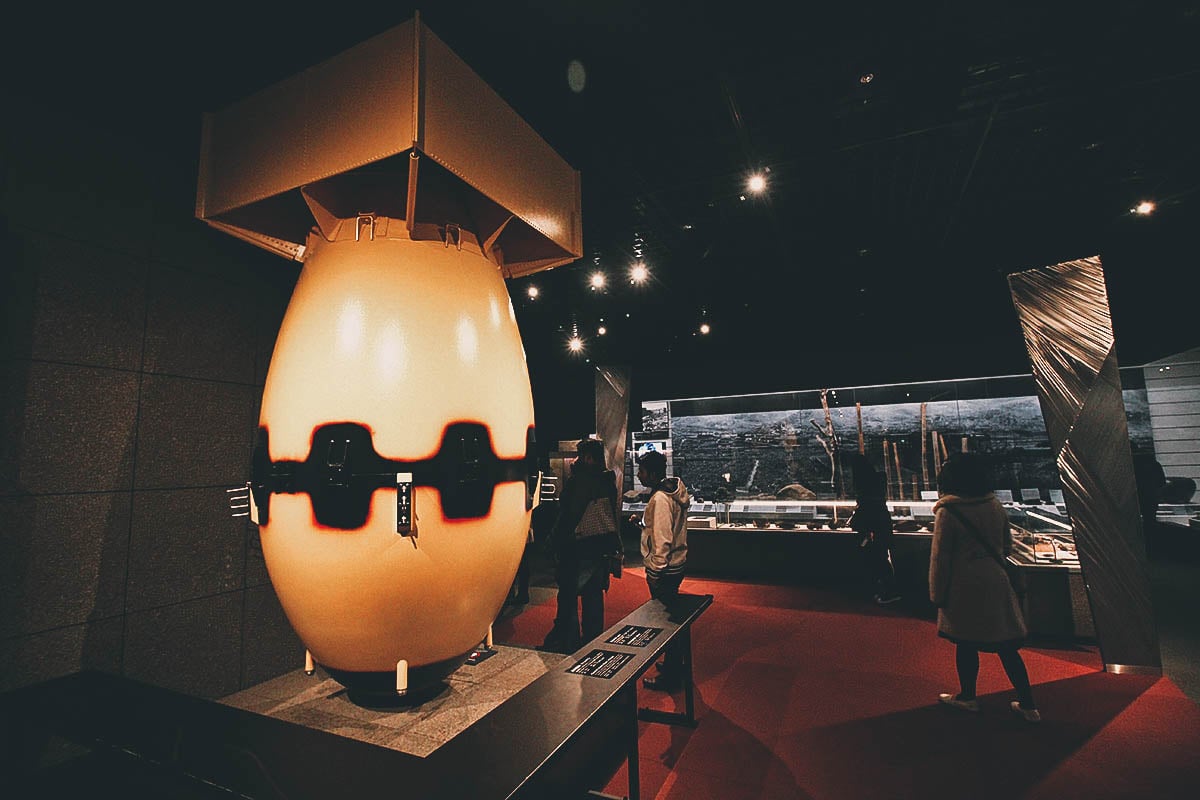 The anatomy of a Fat Man. That red ball in the center is its plutonium core. The bomb was 128 inches long by 60 inches in diameter and weighed 10,300 pounds. 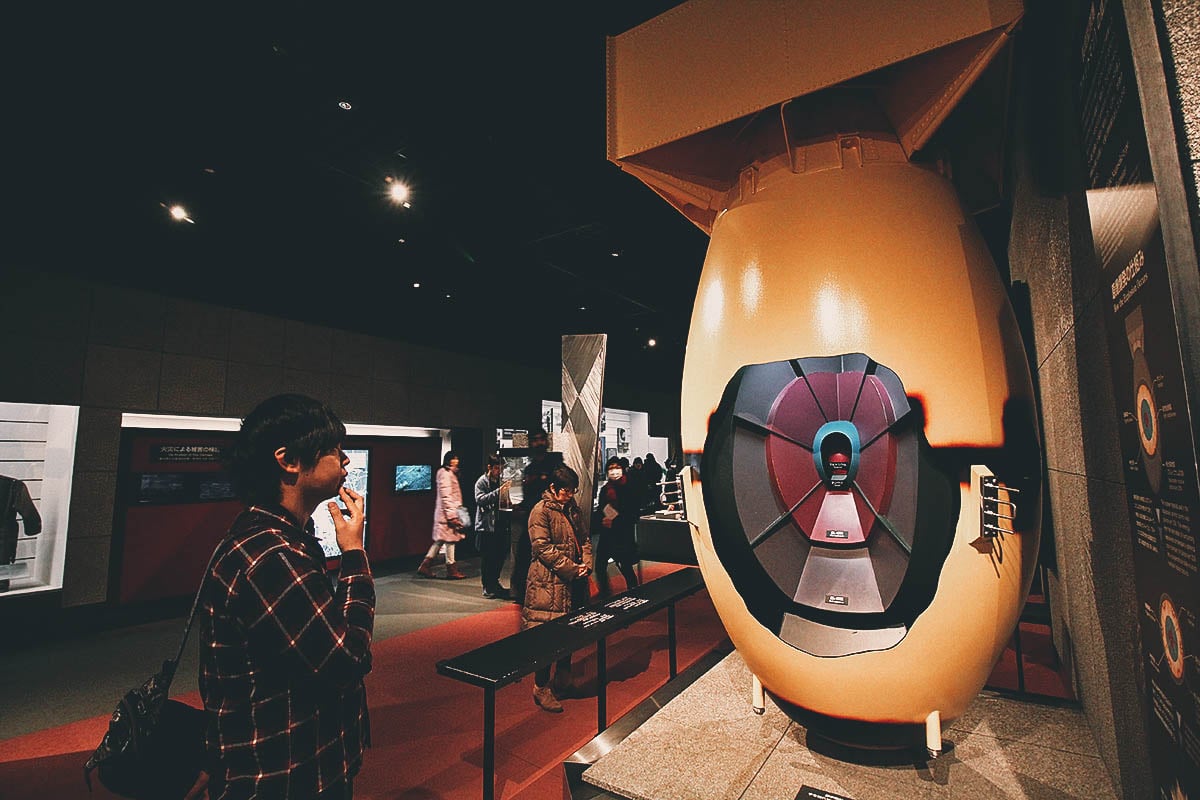 It was interesting to learn that Nagasaki wasn’t even the bomb’s main target. Kokura was the primary target while Nagasaki was the secondary target. Kokura was obscured by clouds and drifting smoke at the time so the decision was made to bomb Nagasaki instead. Some people think that the bomb hit ground but it was actually detonated about 1,650 feet above the city. 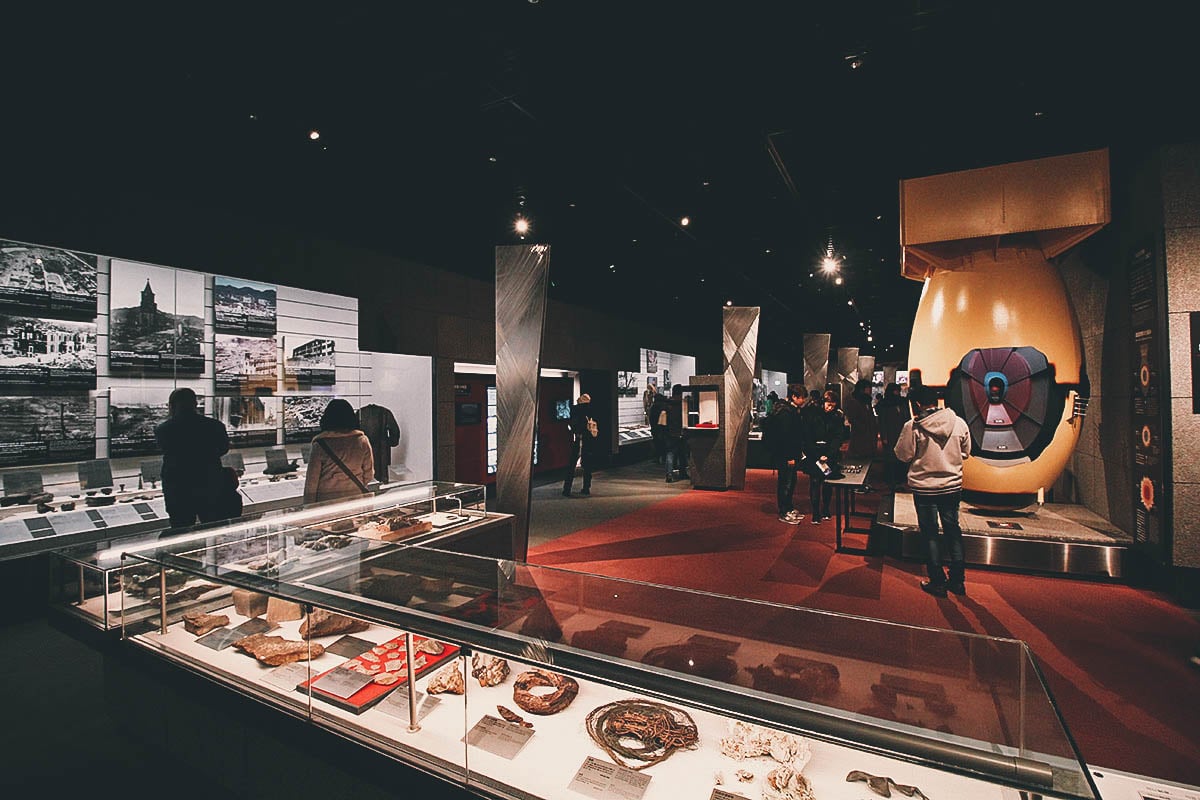 These used to be sheets of glass and bottles that melted from the extreme heat. 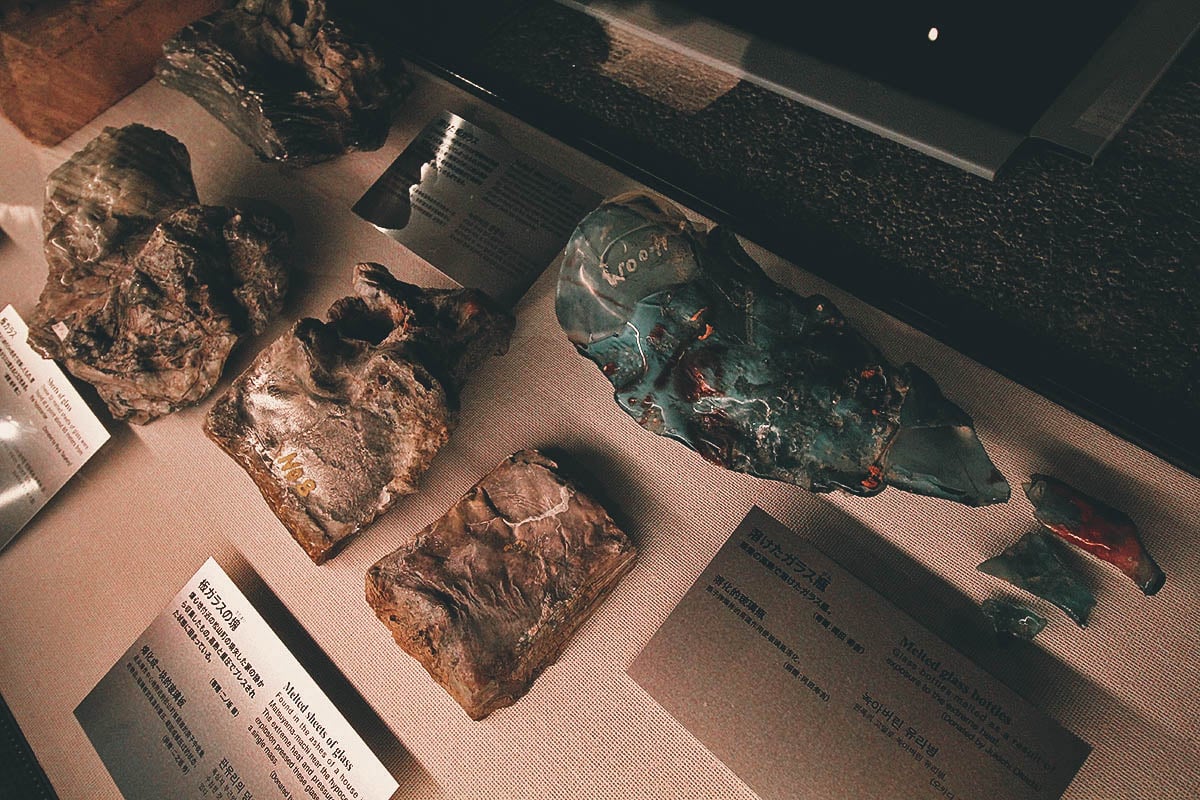 You cold touch some of the museum displays. I think this was another example of melted glass. 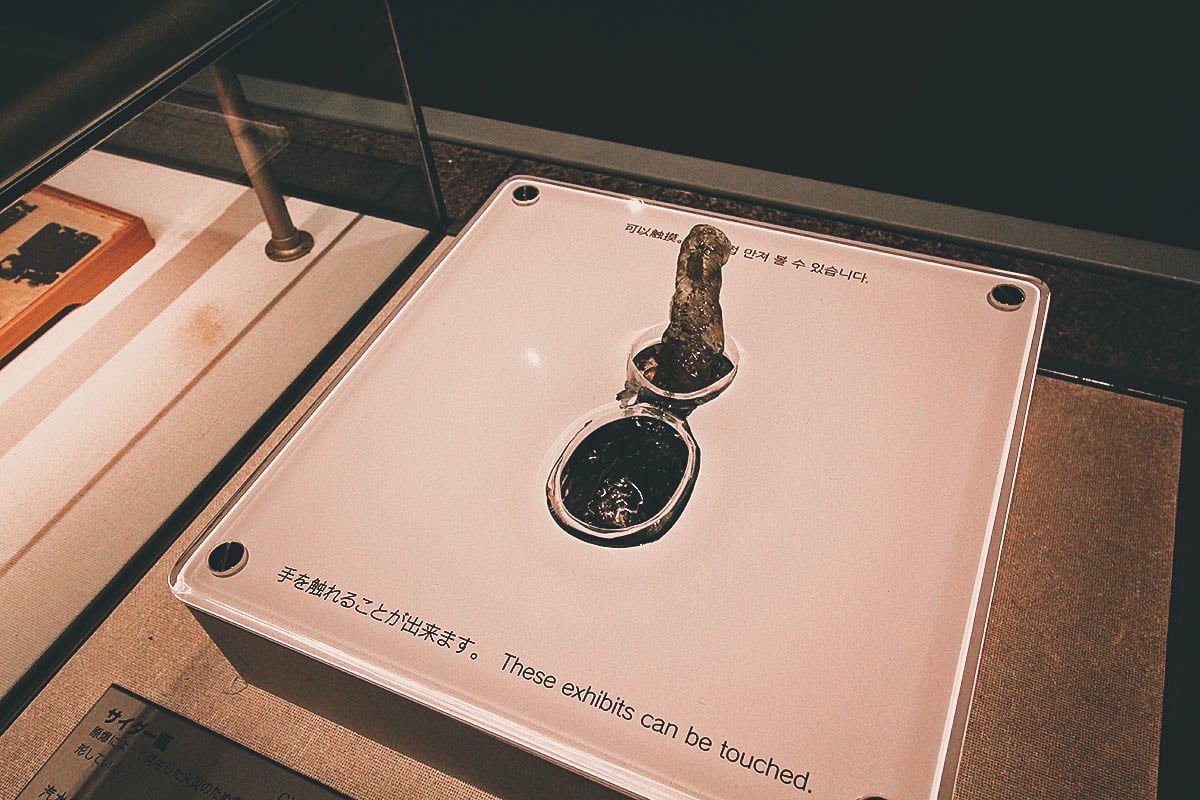 Articles of clothing recovered from the debris. 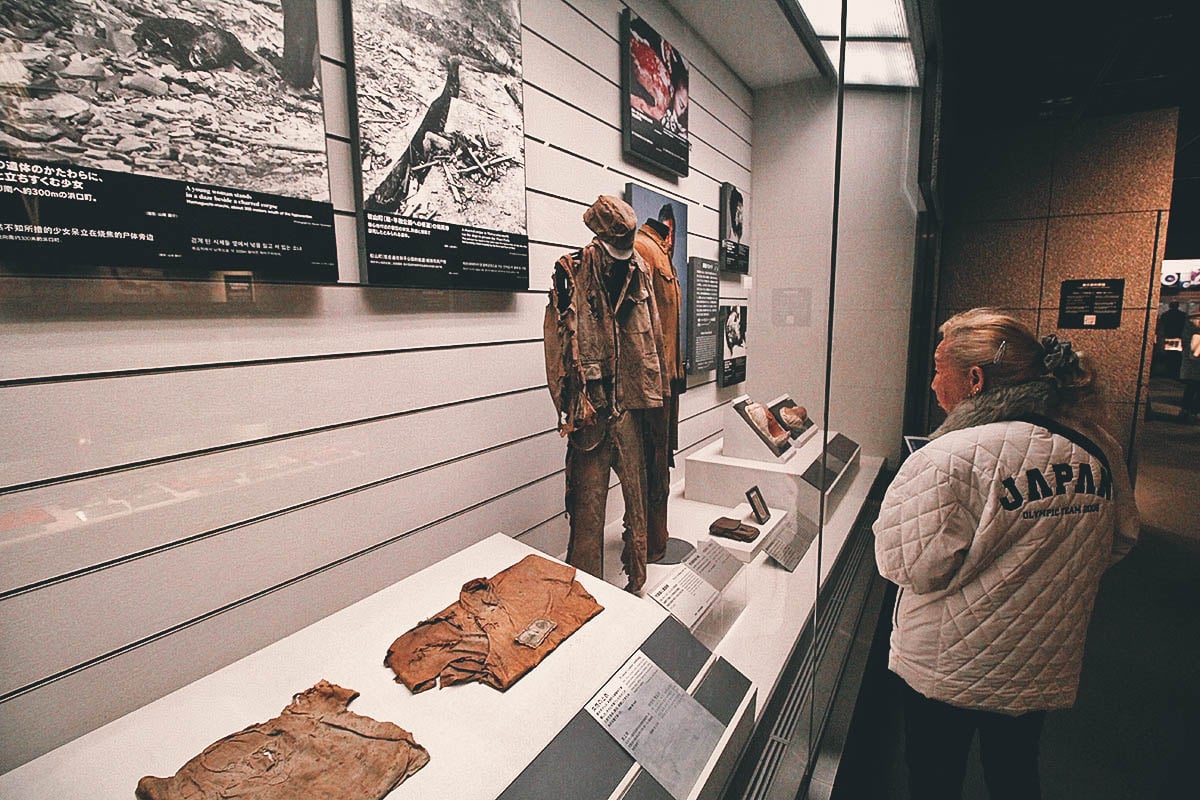 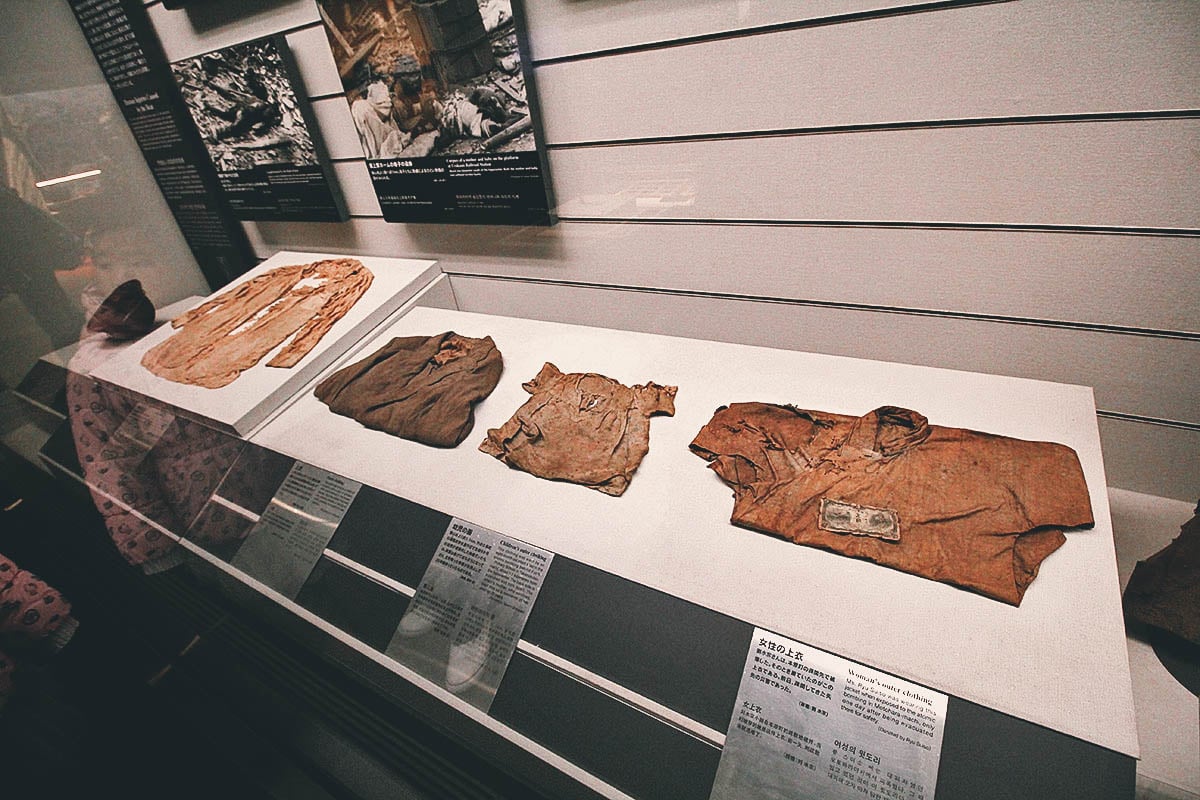 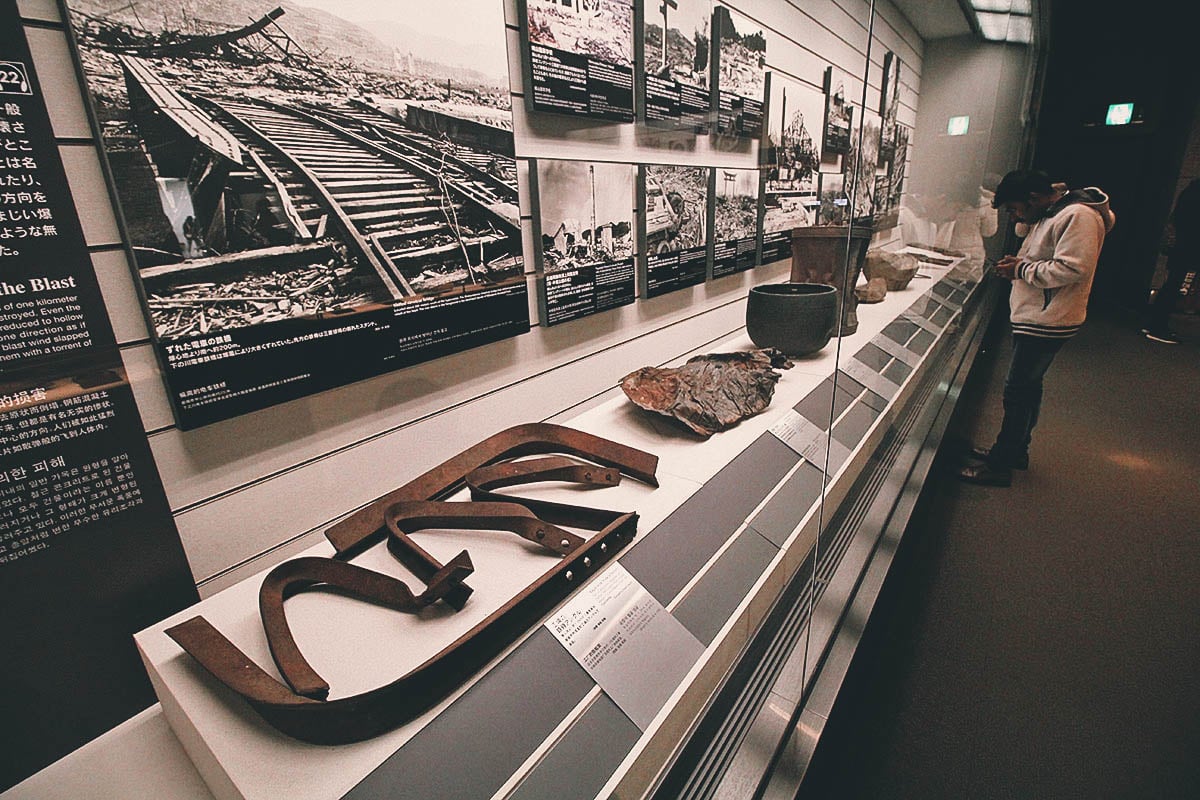 Another clock with its hands forever stopped at 11:02. Seeing these stopped timepieces made me think about my own personal routines. What would I have been doing at 11:02AM? I would have gotten up from my computer to start heating up my lunch. I’d be standing in front of the toaster oven, waiting for the cheese on my pizza to bubble up, when all of a sudden I’d see a flash of light from outside. I’d look up, and that was the end of it. 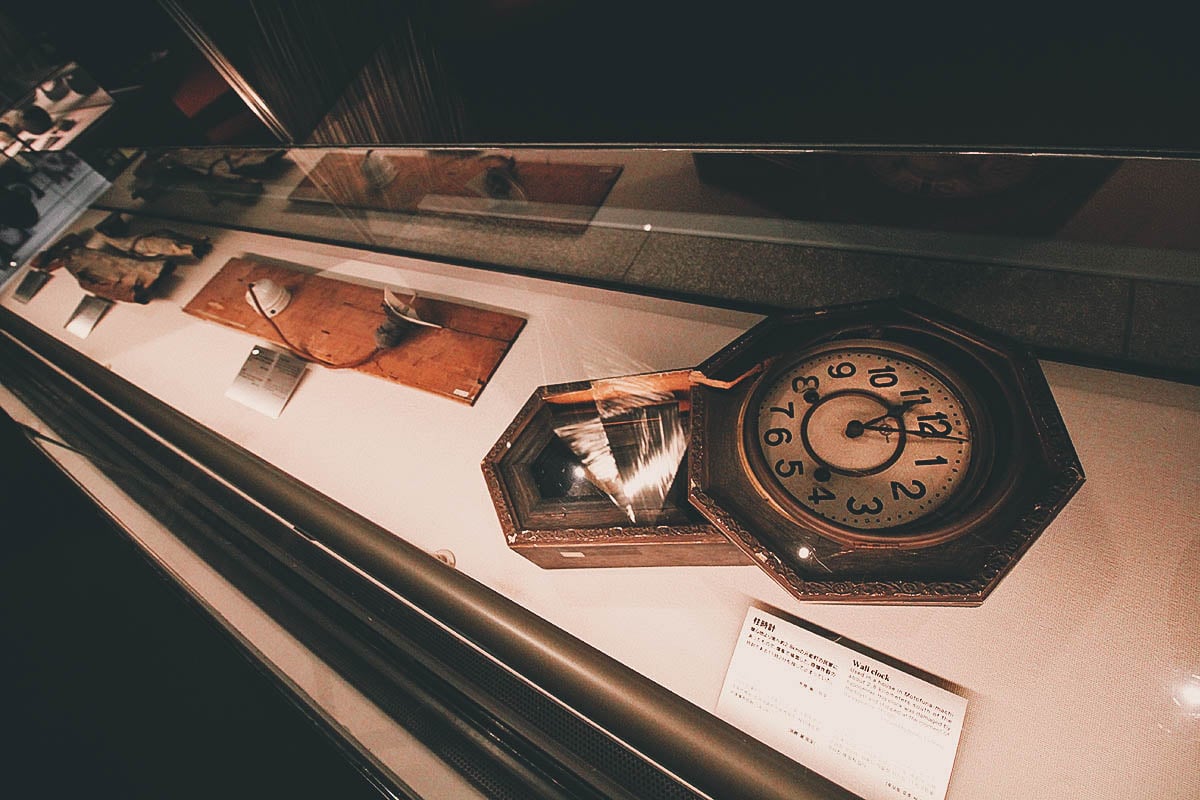 I think these were the medical supplies and equipment used to treat the survivors. 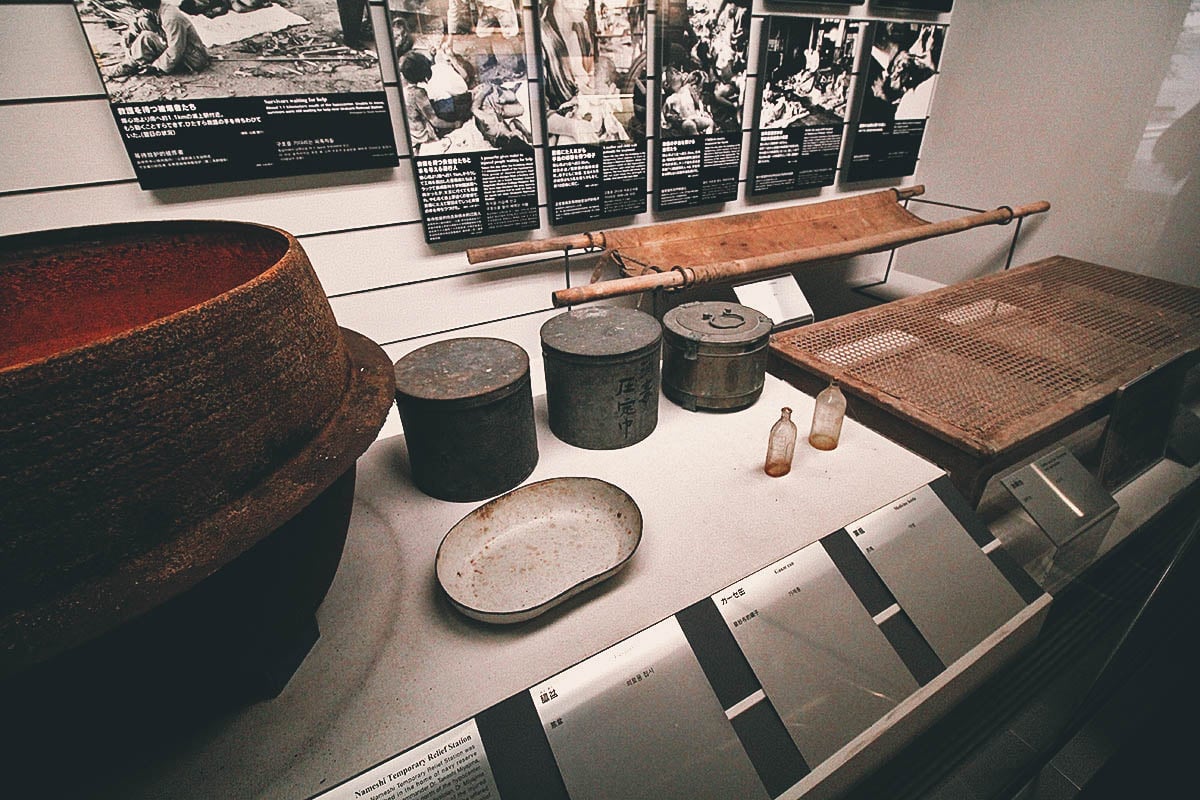 A global map showing present day nuclear stockpiles. Unsurprisingly, the US and Russia have by far the most. 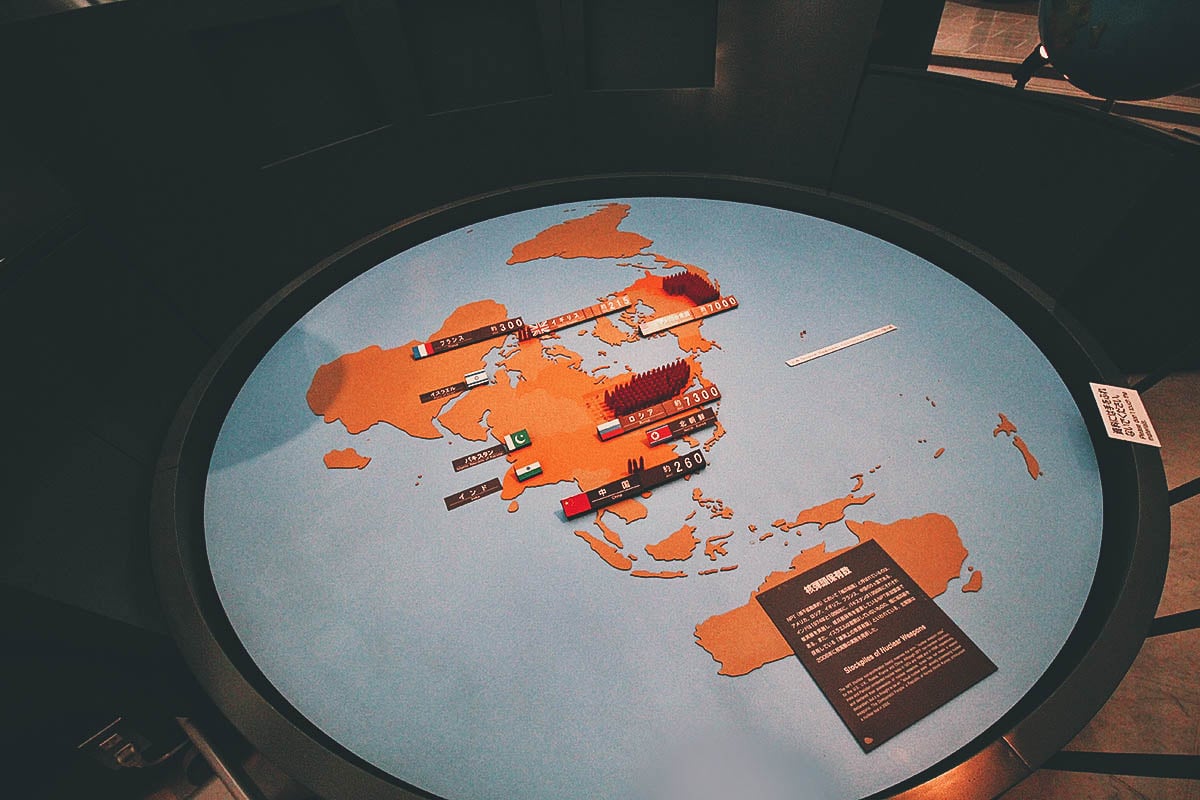 I thought this may have been a replica of “Little Boy”, the atomic bomb detonated days earlier over Hiroshima, but it isn’t. 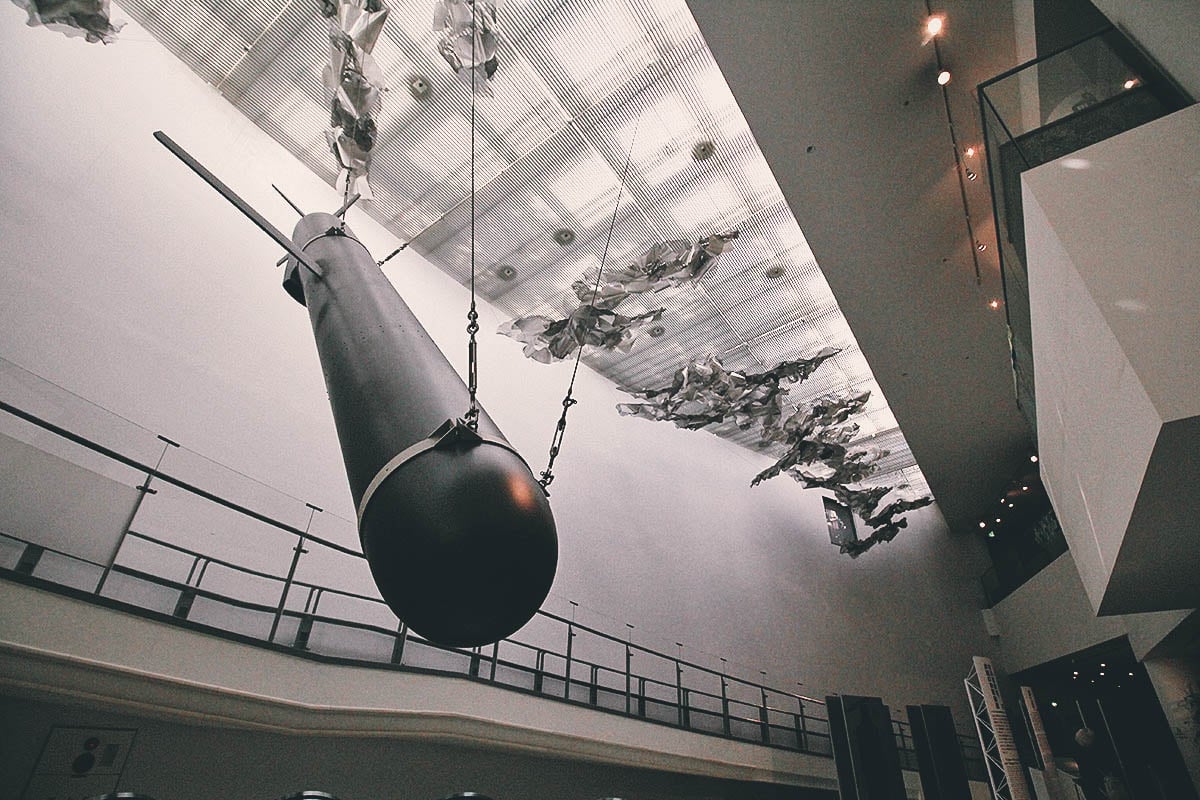 Here’s a display dedicated to the victims of nuclear testing. 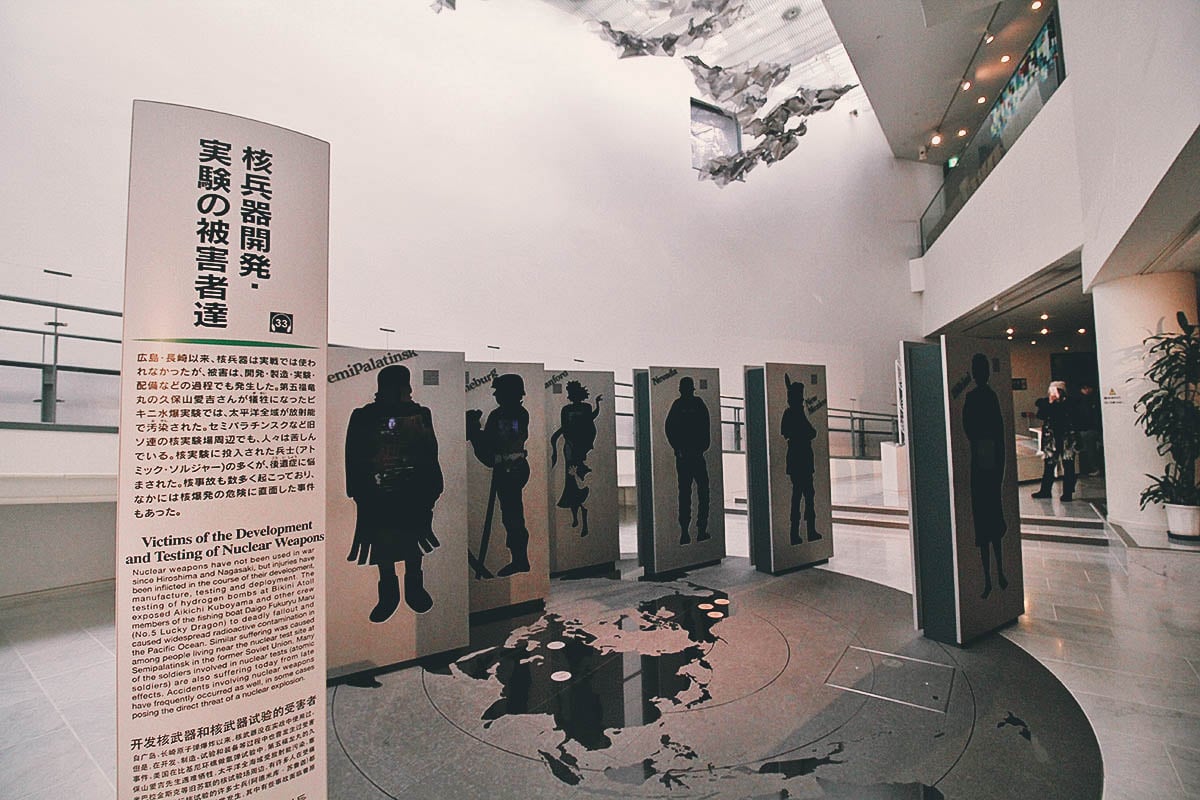 There appear to be two entrances to the museum, one at the bottom where we entered and another up here on the top floor. We made our way out to walk around Nagasaki Peace Park and see ground zero. 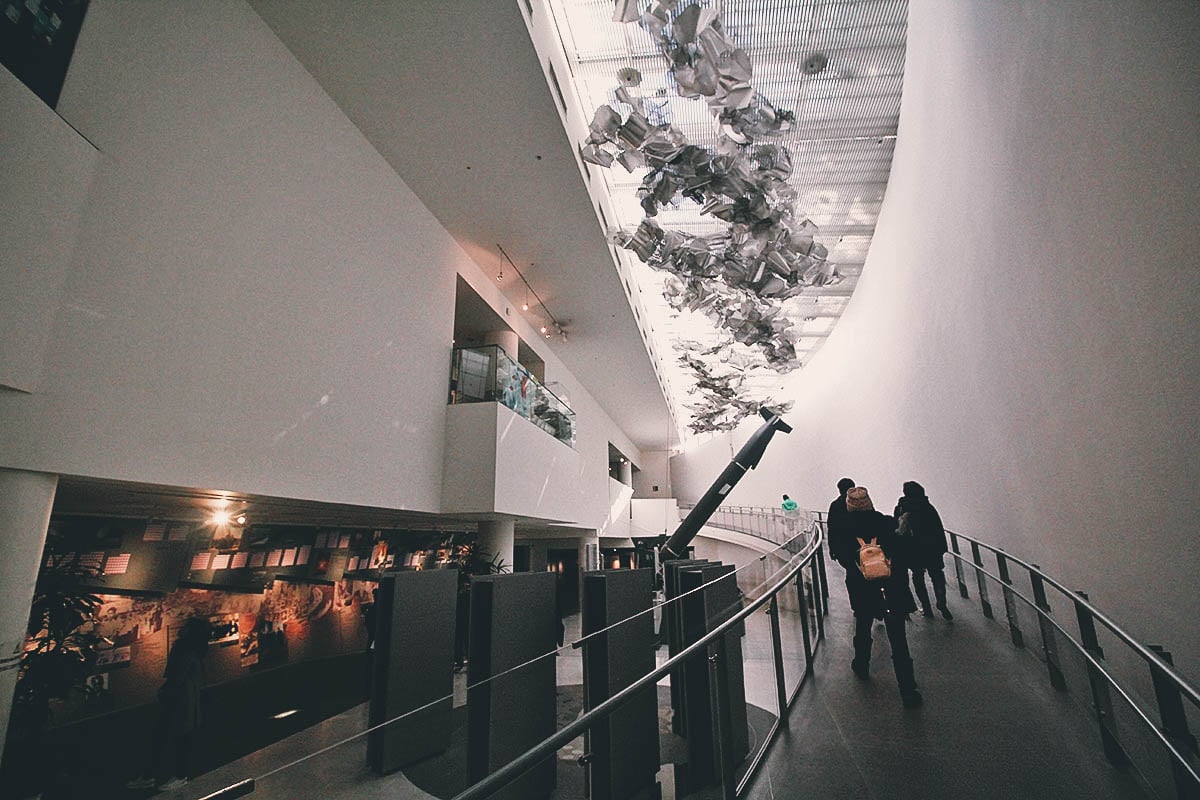 The park is lovely with lots of greenery, statues, and benches. 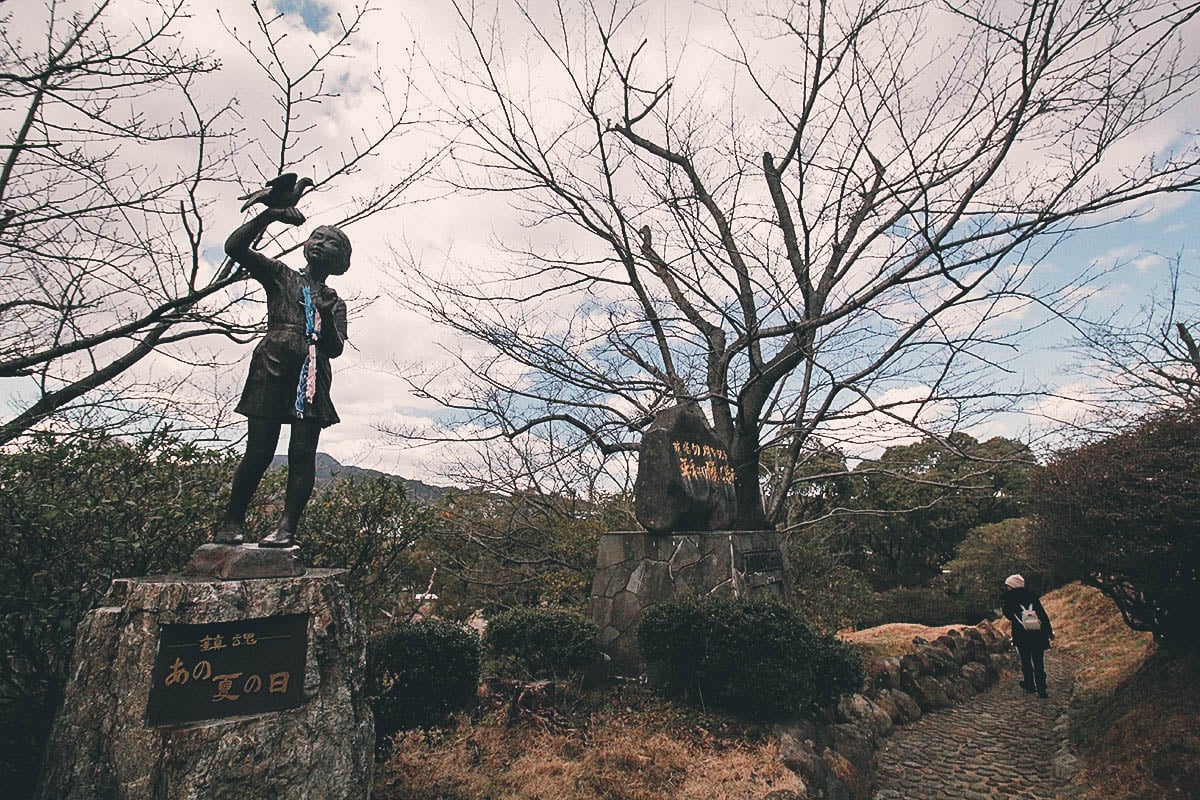 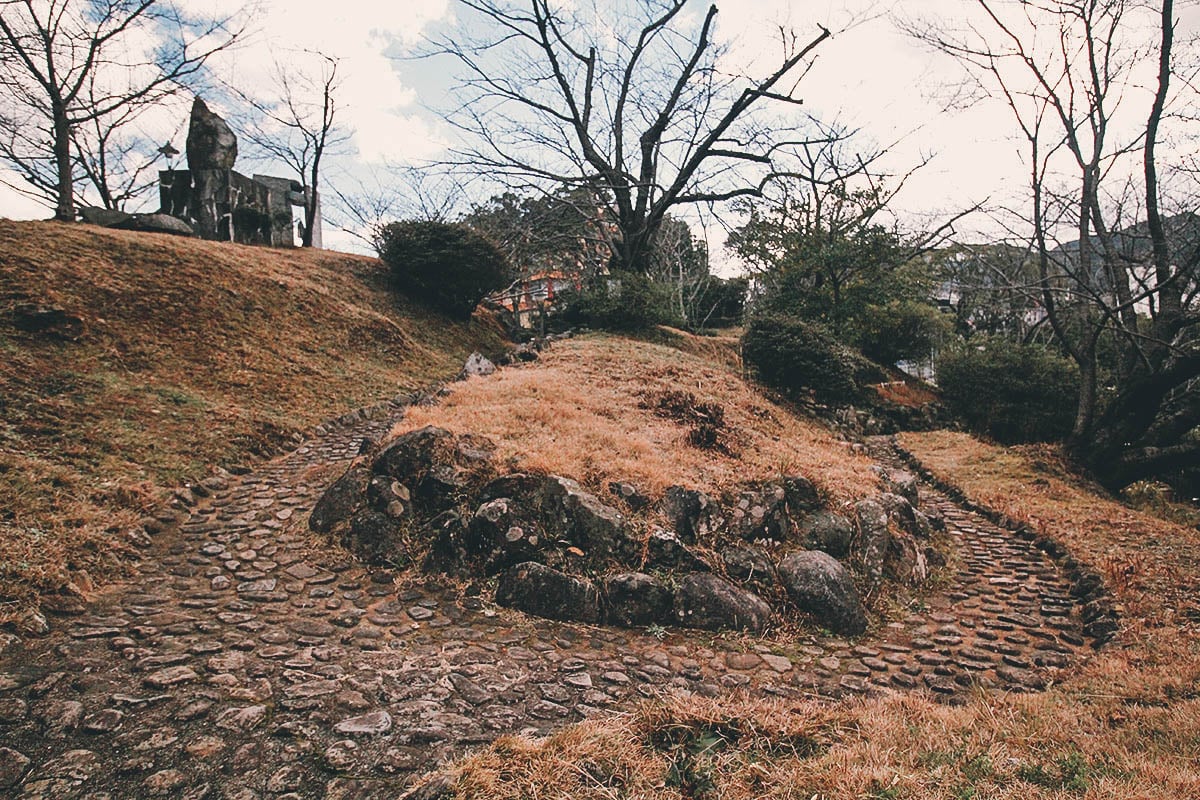 On the other side of this canal was the cenotaph. 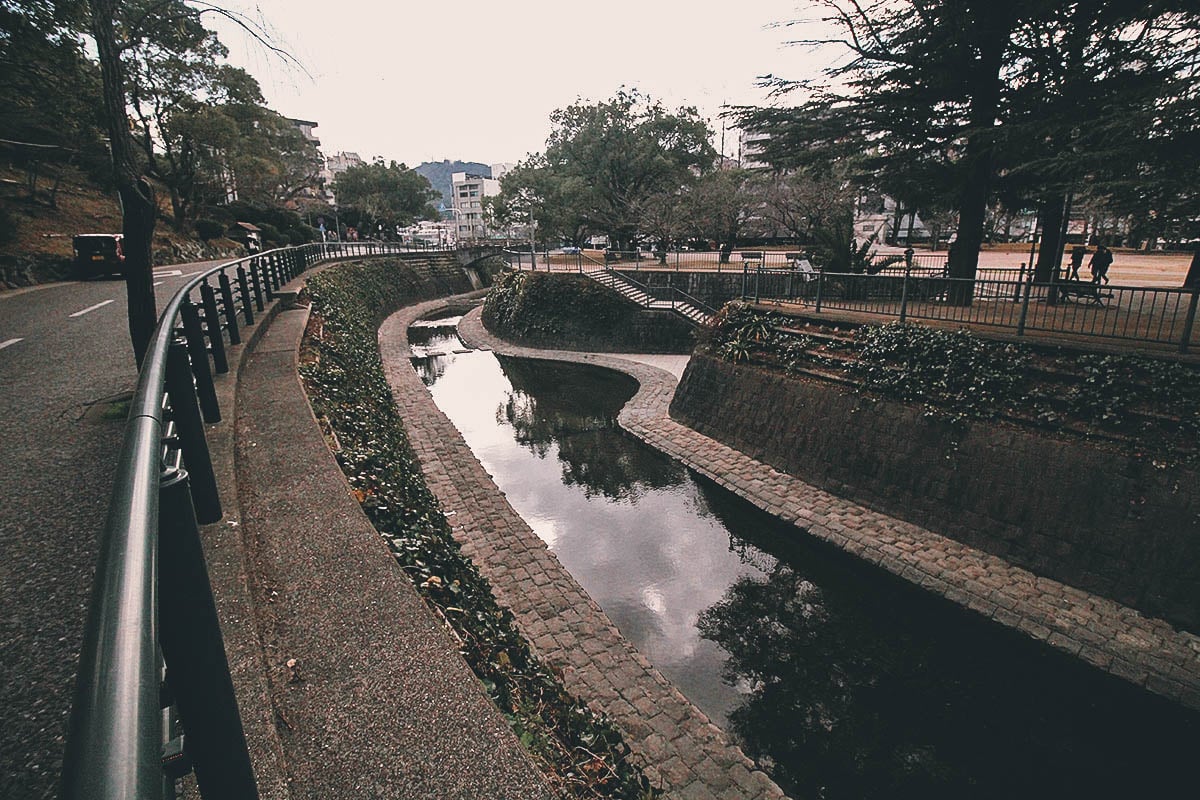 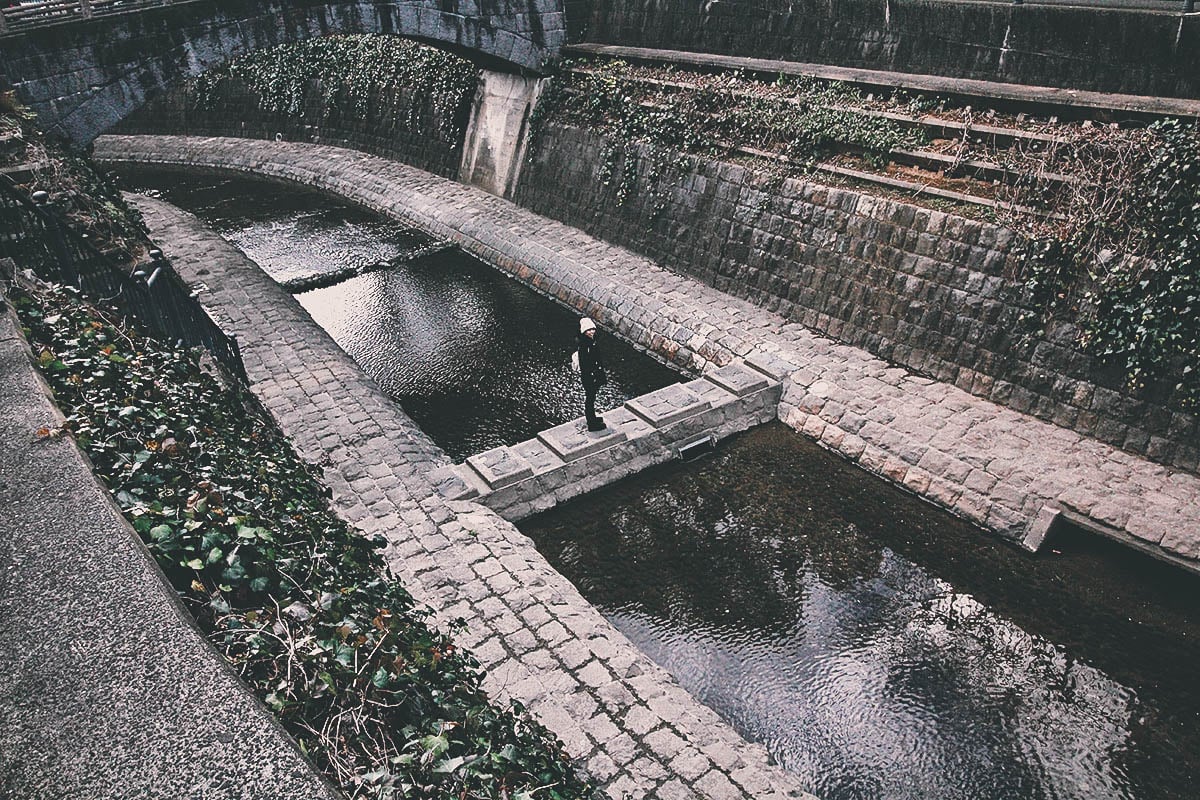 This display was interesting. It showed actual rubble from the bomb blast. 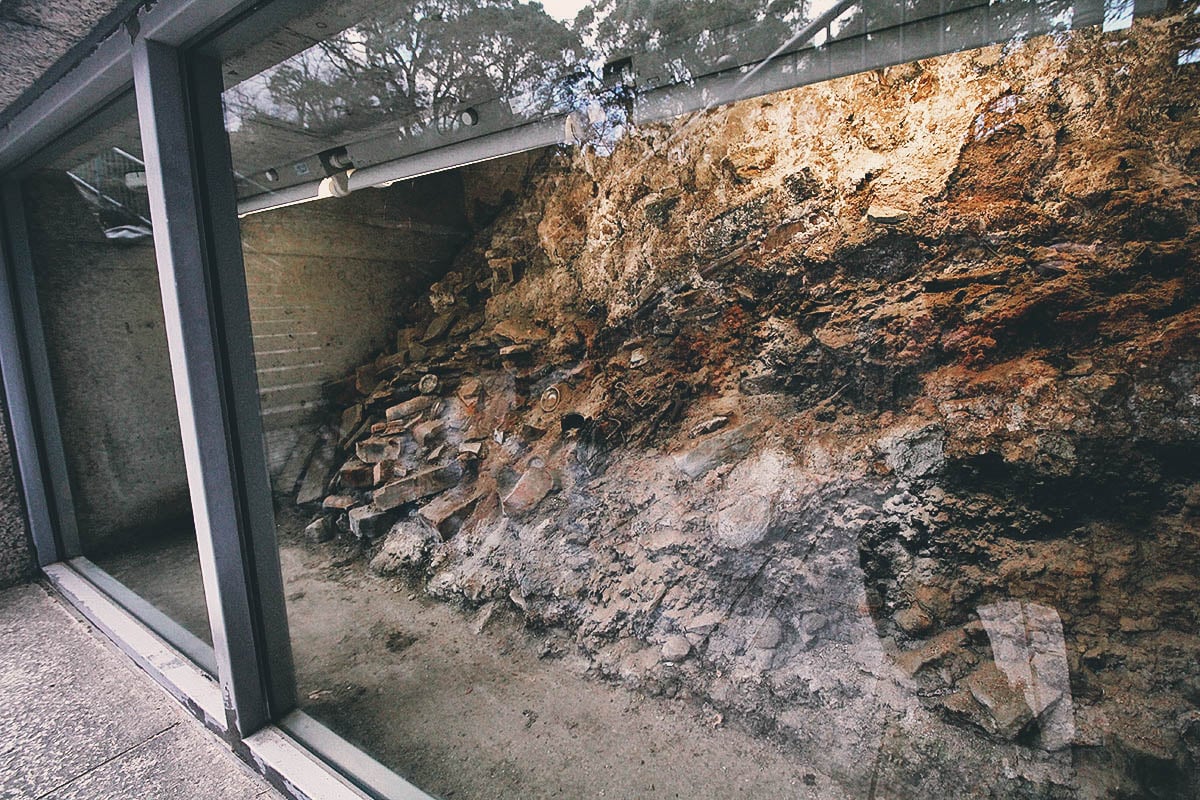 This large statue depicted a mother carrying her dead baby. On the base is the date and time of the bombing – 11:02AM, August 9, 1945. 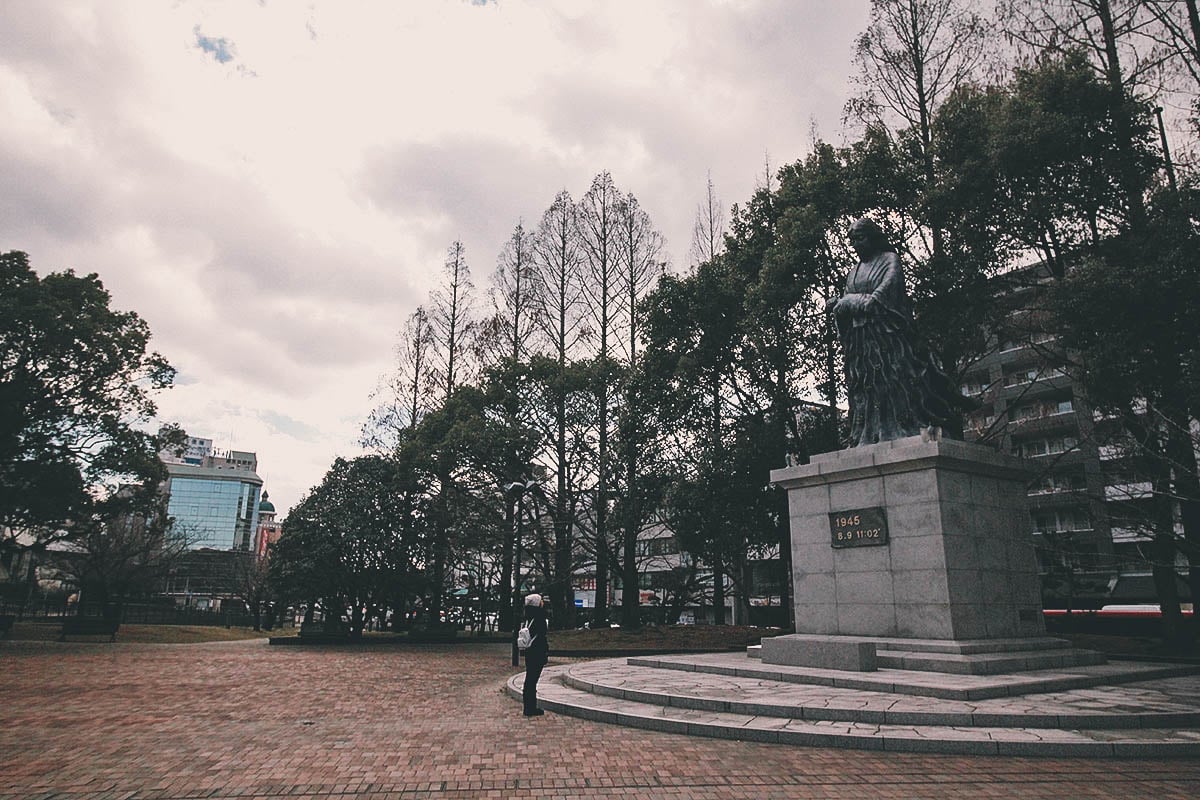 As you can probably tell from the design, this was ground zero. On the right side of the memorial are the structural remains of Urakami Cathedral. 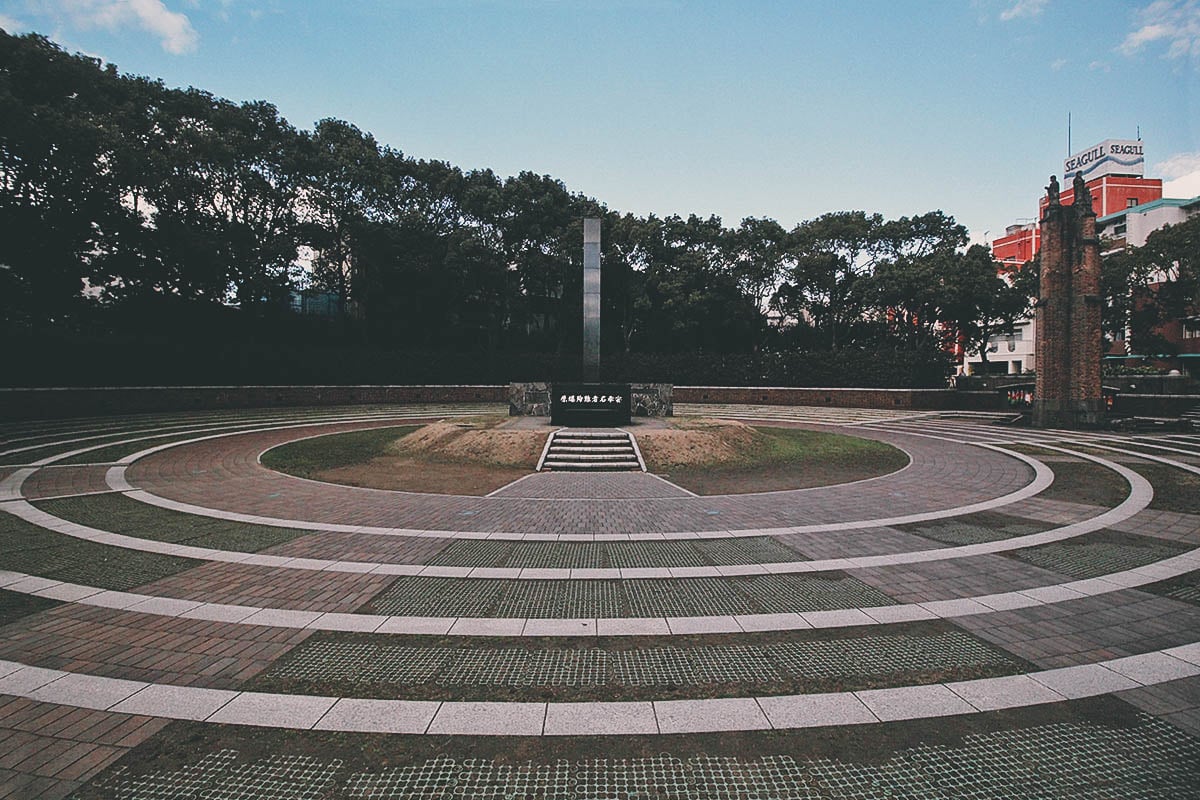 The attractions dedicated to the memory of the atomic bomb are spread out over a large area so there’s actually more to see here than what’s pictured above. For one, there’s the aforementioned National Peace Memorial Hall dedicated to the victims of the bombing. A commemorative monument situated next to the museum, there you’ll find photos, memoirs, and more intimate accounts of the event.

We didn’t have time to see everything but if you’re interested, then you can easily spend an entire afternoon here. There’s much to cover and the grounds are pleasant, but there is a palpable somberness to this place that leaves you feeling heavy. It’s understandable, and expected.

HOW TO GET THERE:
Take the tram to Hamaguchimachi station then follow the signs up to the Atomic Bomb Museum.