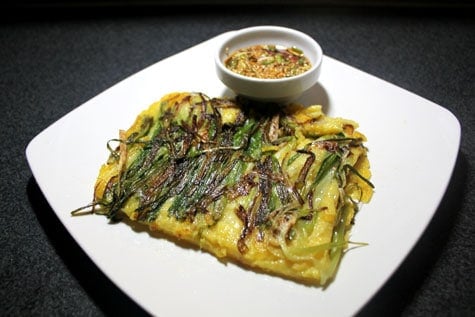 By pure coincidence, Ren whipped up this fantastic two-part Korean-themed dinner on the very same day North Korean dictator Kim Jong Il passed away. The fact that she rarely prepares Korean food makes this chance occurrence even more surprising, which got me curious as to the differences between North and South Korean cuisine.

Apparently, North Korean food in general is known to have a purer and cleaner taste than its South Korean counterparts, so if you’re used to a lot of spices and seasonings in your food, then you might find it relatively bland. Their kimchi, for example, tastes quite sweet and mild in comparison to the spicy South Korean variety, and it doesn’t contain heavy amounts of garlic.

One of the more famous North Korean dishes, particularly in the capital of Pyongyang, is mul naengmyeon. Served in traditional brassware, it consists of thin, chewy buckwheat noodles served in an extremely cold broth. It’s mixed in with watery kimchi and meat stock for just a hint of mild flavor, then topped with a slice of sweet Korean pear. Traditionally eaten during the cold winter, it is also humorously called Pyongyang deoldeori, which literally means “shivering in Pyongyang.”

This may be an oversimplification, but what a contrast! Shivering and bland up north, spicy and flavorful down south. Not to be insensitive since I’m hardly an expert, but it seems to me that even the personality of their food is representative of the dissimilarities in character between these two very like, but starkly different regimes, truly giving credence to the old adage: “You are what you eat.”

Part I of this two-part Korean mini-feast, Ren made this scrumptious Galibi Pajeon. Galibi in Korean means “scallop”, pa- means “green/spring onion”, and -jeon refers to any number of these pancake-like dishes. Absolutely dee-licious! 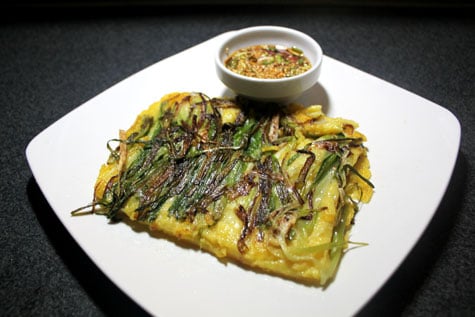 You can’t see them, but this pajeon is teeming with little Chinese scallops. 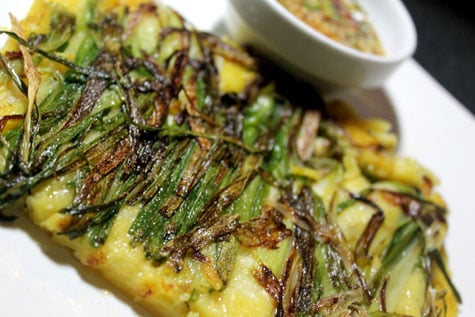 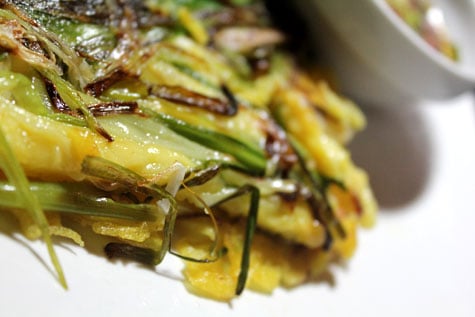 This sesame-licious sauce is magnificent. 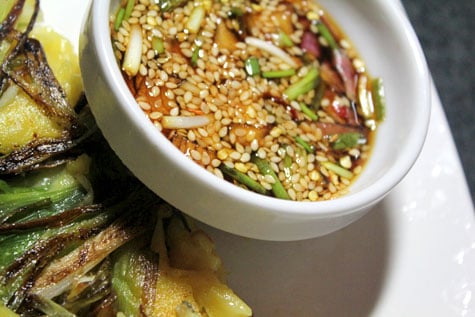 That Pajeon, in Korea, is usually eaten while drinking Makgeolli? Referred to in English as “Korean rice wine,” Makgeolli is a sweet alcoholic beverage made from a fermented mixture of wheat and rice which gives it a milky, off-white color.