EDITOR’S NOTE: This article was written by Traveleater Sep Simborio and verified by Andrea Albizures, a Guatemalan food expert and student at Rafael Landívar University in Guatemala City.

Nature-loving food lovers who are thinking of their next travel destination may want to shift their attention to this relatively small Central American country of Guatemala. The name comes from the Nahuatl word Quuahtlemallan, which translates to “place of many trees” or “land of trees.” It perfectly describes the country’s heavily forested regions and several mountain ranges, making it worth visiting by the outdoorsy tourist.

Guatemala is also recognized for its ethnic, cultural, and linguistic diversity with its 25 ethnicities, 25 languages, and four cultures (Ladina, Xinca, Garifuna, and Mayan). Combining the country’s rich history, diverse people, and geographic location has created a heterogeneous mixture that makes for an exciting cuisine.

If you’re planning a trip to Guatemala and want to learn more about the cuisine, then you may be interested in going on a food or drinking tour.

No time to read this article on the food in Guatemala? Click on the save button and pin it for later! 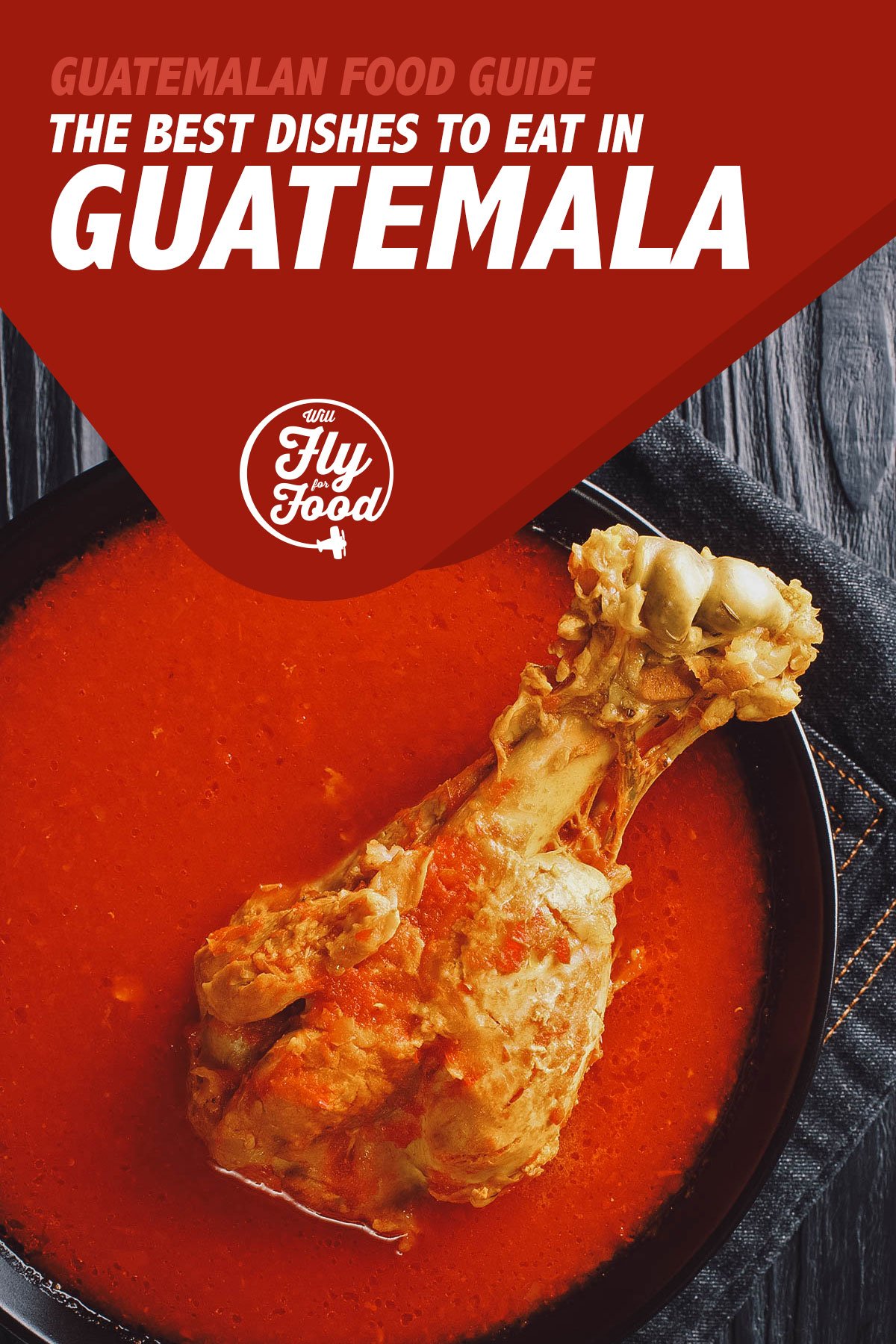 WHAT IS TRADITIONAL GUATEMALAN FOOD?

Traditional Guatemalan food is generally described as based on Mayan cuisine with Spanish influences. Dishes prominently include beans, chilies, and corn, which are abundantly cultivated along with a wide variety of agricultural products due to the country’s tropical setting, fertile volcanic soil, high rainfall, and warm temperatures. This ideal setting has helped make the country the birthplace of chocolate and home to the popular Hass avocado.

When it comes to meats, beef, chicken, pork, and to a lesser extent turkey are frequently used as ingredients and often accompanied by rice and beans. They’re stewed, grilled, or fried, with some dishes having creamy sauces that work well with vegetables. As a result, Guatemala arguably has the most delicious cuisine among its neighbors in Central America.

THE BEST FOOD IN GUATEMALA

Never leave Central America without sampling all the Guatemalan dishes on this list to have a deeper understanding of the country’s Mayan roots and Spanish colonial influence.

Tostadas Guatemaltecas or Guatemalan tostadas are snacks made with deep-fried or oven-toasted corn tortillas as the base. They’re often served as a quick snack or appetizer, usually before lunch or when celebrating holiday festivities with family. They’re also commonly sold as street food in Guatemala.

Tostadas can be topped with various ingredients but traditional Guatemalan tostadas are usually topped with guacamole, tomato salsa, or refried black beans. Recipes vary but other ingredients may include onions, sweet peppers, chopped meat, adobo seasoning, herbs, and spices to give the tostadas that extra kick of flavor.

Tamales are a traditional Mesoamerican dish that dates back to 8,000 to 5,000 B.C. They’re made with either corn masa or rice flour and steamed in fresh plantain leaves (or corn husks) to give them a rich flavor and aroma. They can be filled with various meats, cheeses, fruits, corn, tomatoes, bell peppers, roasted chilies, or any other ingredient.

While tamales are common in many Latin American countries like Mexico, Belize, Peru, Bolivia, and the Dominican Republic, Guatemala has four main versions of the dish – tamale colorado (red tamales), tamale negro, chuchito, and tamalito.

Of the four, tamal colorado are the most popular (pictured below). They’re typically eaten every Saturday by many Guatemalans. They’re made with a dark red savory sauce with green olives and meat, usually chicken or pork.

Tamales negros are a type of Christmas tamale made with a sweet mole sauce, raisins, and meats like turkey, chicken, or pork. Chuchitos (pictured below) are made with thicker masa and wrapped in corn husks. A popular street food in Guatemala, they’re filled with a simple tomato sauce and chicken. Lastly, tamalitos are small tamales often served with meals. They’re eaten like bread and used as a vessel to dip into soups and salads.

Guatemalan tamales come in various sizes, with the bigger ones having more ingredients that could be more than enough for a full meal. Tamales recipes may involve simple ingredients but the dish itself is labor-intensive to prepare, so it could take most of the day to create them.

If each country has its own soup dish that stands to represent its culture and cuisine, Guatemala has caldo de res. Often called cocido or “cooked” in Antigua, this beef broth is one of the most consumed dishes in Guatemala. As a result, it’s a regular offering in menus of Guatemalan restaurants and other dining establishments.

Its roots can be traced back to a similar dish of Andalucian origin – a peasant soup called puchero that was prepared during colonial times in Latin America and the Philippines. It has taken many names in countries where it’s popular, and Guatemala has its own version of it in the form of caldo de res.

This Guatemalan dish is made by first preparing the broth using the meat and bones before adding the vegetables, including carrots, corn, potatoes, and chayote squash. Finally, it’s served with rice, freshly made corn tortillas, or avocado slices.

Jocon is another traditional Guatemalan dish that hails from Huehuetenango, a city and municipality in the country’s western highlands. It’s popular among the Mayan population since the dish itself is heavily influenced by its people.

Also known as jocon de pollo, the recipe uses chicken stewed in a green sauce made with cilantro and tomatillos. It’s then thickened with ground pumpkin and sesame seeds and served with corn tortillas, rice, and avocado slices.

Being recognized as one of the national dishes of Guatemala is huge, earning pepian de indio its rightful spot on this list. This chicken stew is also said to be the ultimate Guatemalan comfort food. With its tender cuts of chicken cooked in a lightly-spiced tomato sauce and mixed with toasted pumpkin seeds and chili sauce, it’s hard to argue with that.

Its origins date to pre-colonial times when the Mayans grew crops such as corn, beans, chilies, squash, and tomatoes, which are the basis of their cuisine. But the key to the delicious nutty flavor of pepian de indio is the pan-roasted pumpkin and sesame seeds that are ground into a fine powder and mixed in the sauce to give it that smooth velvety texture. It’s simply mouthwatering.

Kak’ik is one of the most popular Mayan dishes in Guatemala and is also recognized as one of the country’s dishes of intangible cultural heritage. It’s a type of turkey soup cooked in a lightly spiced red broth.

The name of the dish was derived from a Mayan Q’echi’ tradition during pre-colonial times. This popular Guatemalan turkey soup is traditionally prepared by using native turkeys, tomatoes, cilantro, chilies, and achiote that gives the soup its vibrant color.

With almost 300 years of colonial rule (1540 to 1821), Spain had a massive influence on the country, particularly on its cuisine. One of its delicious gifts is hilachas or the Guatemala version of shredded beef stew, which features shredded beef simmered in a lightly spiced velvety sauce with cuts of tender potatoes. The name hilachas literally translates to “threads,” describing the appearance of the beef that’s been shredded into thin strips.

Since hilachas have roots in colonial Spain, it’s quite similar to the Cuban dish ropa vieja. Also made of shredded beef with vegetables, ropa vieja appears like a pile of colorful rags, which is where the translation “old clothes” came from.

Like most traditional dishes in Guatemala, hilachas has evolved to have popular variations with recipes that include carrots, chayote squash, cloves, cinnamon, fresh green beans, and tomatillos.

If there’s one dish served during a specific holiday in Guatemala, that would be fiambre. Widely regarded as a Guatemalan national dish, fiambre is a unique salad prepared and consumed yearly for All Saints Day (Dia de Todos Santos) and the Day of the Dead (Dia de los Muertos).

Fiambre was believed to have started when families tending their dearly departed’s graves would bring food – usually what their loved ones enjoyed when they were still alive – and share a meal. They believe this reignites their connection with them. With Guatemalans known for being warm and friendly, they eventually share what they have with other neighboring families visiting their gravesite, creating fiambre in the process.

Fiambre translates to “cold meat” or “cold cuts” in Spanish. It’s an assembly of various ingredients in one big plate and served cold. A fiambre recipe involves an assortment of meats, cheeses, pickled relishes, and vegetables, which totals an average of around forty ingredients, making it worthy of being the mother of all salads.

Being the birthplace of chocolate, you’ve probably been waiting for a chocolate dish to be represented in this guide on Guatemalan cuisine. This is where mole de platano makes its grand appearance.

The dish has been deemed so important in the country’s culinary heritage that it was given Intangible Cultural Heritage status in 2007 by the Guatemalan Ministry of Culture and Sport.

As described, Guatemala is considered the birthplace of chocolate. The ancient Mayans worshipped the cacao tree and its beans to the point that they referred to it as the “food of the gods”. Ixcacao was the goddess of chocolate and was often called upon to provide bountiful harvests.

During the Mayan era, chocolate was consumed mostly as a bitter and spicy drink. To prepare, they would grind the cacao beans by hand and mix it with water, vanilla, honey, corn, and chili. Typically reserved for the elite, chocolate was regarded as a valuable commodity that was used as an aphrodisiac and a form of currency.

Atol de elote is a sweet and creamy corn drink that’s commonly sold in markets. Served warm and often seasoned with cinnamon or vanilla, atol de elote tastes similar to arroz con leche and could be described as a cross between horchata and corn chowder.

Creating the silky rich texture is traditionally done by grinding corn using a grinding stone or metate. Milk, sugar, and spices are mixed in a giant pot where the sweet concoction is heated before being served in cups.

Needless to say, no one knows Guatemalan food better than a local, so what better way to experience Guatemalan cuisine than by joining a food tour? A food-obsessed local will take you the city’s best markets, restaurants, and street food stalls and explain all the dishes to you in more detail. Check out Get Your Guide for a list of Guatemalan food tours in Antigua and other cities in the country.

Traveleaters are in for a treat when visiting Guatemala. Not only will they get to experience the gorgeous landscape of the country, they’ll also get to have a taste of history through the wonderful Guatemalan dishes on this list. How fascinating would it be to know that the best of Guatemalan food has been passed on for generations by its Mayan ancestors? That’s a mouthful of rich ancient history right there.

Some of the links in this article on Guatemalan cuisine are affiliate links. If you make a booking, then we’ll earn a small commission at no additional cost to you. As always, we only recommend products and services that we use ourselves and firmly believe in. We really appreciate your support as it helps us make more of these free travel and food guides. ¡Gracias!