It’s the restaurant with no name. At least, as far as I can tell, no formal English name.

We had already tried Hokkaido’s famous grilled mutton dish called jingisukan (pronounced jing-giss kahn) or “Genghis Khan” at the Sapporo Beer Museum. We enjoyed it so much that we wanted to have it again, but this time, we wanted it over coals and a wire grill instead of the customary convex metal skillet. The thing is, we didn’t know where to get it.

Googling “wire grill charcoal jingisukan sapporo” didn’t give us many leads so we decided to walk around Susukino and try our luck. Thankfully, we found this place just a couple minutes away from Susukino station.

It doesn’t seem to have an English name, but it does have one in Japanese – ホルモン食堂 4条店 – which when plugged into an online translator, roughly translates to “Hormone canteen 4 st stores”. Not the catchiest of names is it? 😆

The restaurant is about a couple minute’s walk from Susukino subway station. It’s across the street obliquely from this building with all the Japanese lanterns. 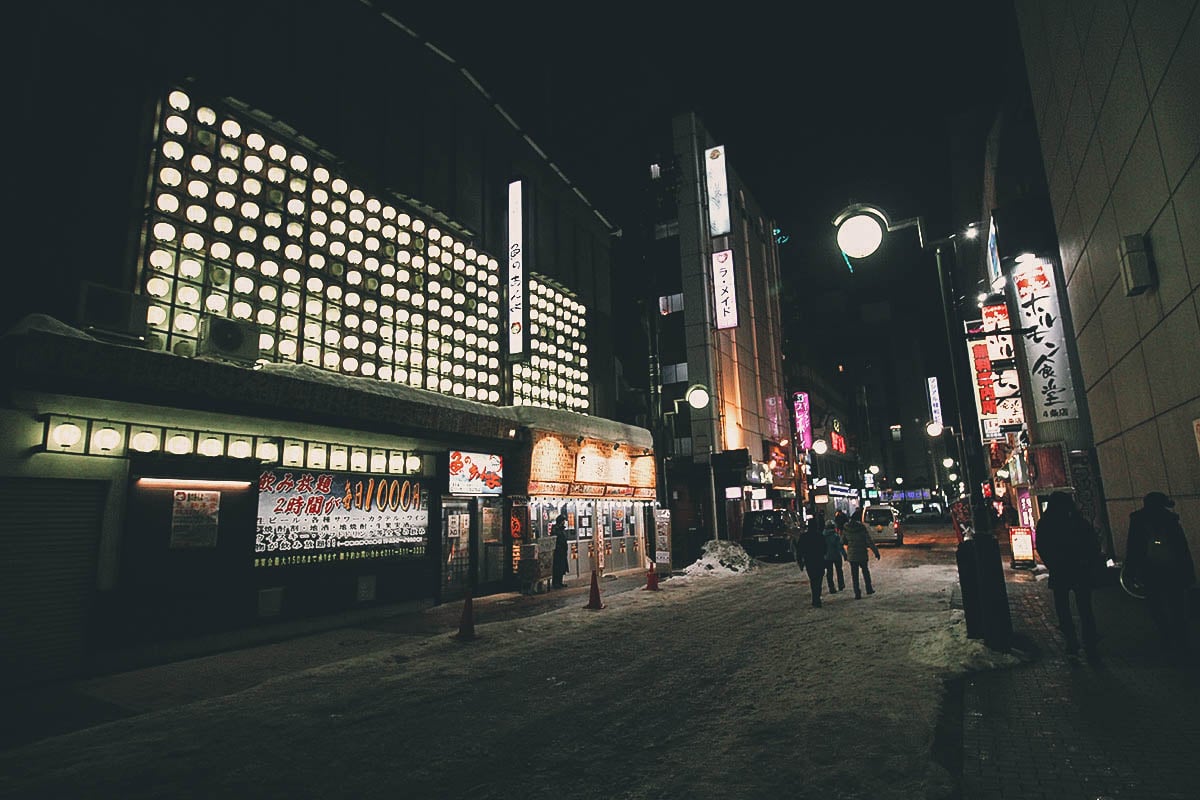 Jackpot! That picture of the wire grill over charcoals told us we were at the right place. As described, the restaurant’s Japanese name loosely translates to “Hormone canteen 4 st stores”. By “hormone”, it’s referring to the Japanese word horumon which means “offal”. We didn’t know it at the time but this restaurant specializes in grilled offal as well. I wish we knew! 😥 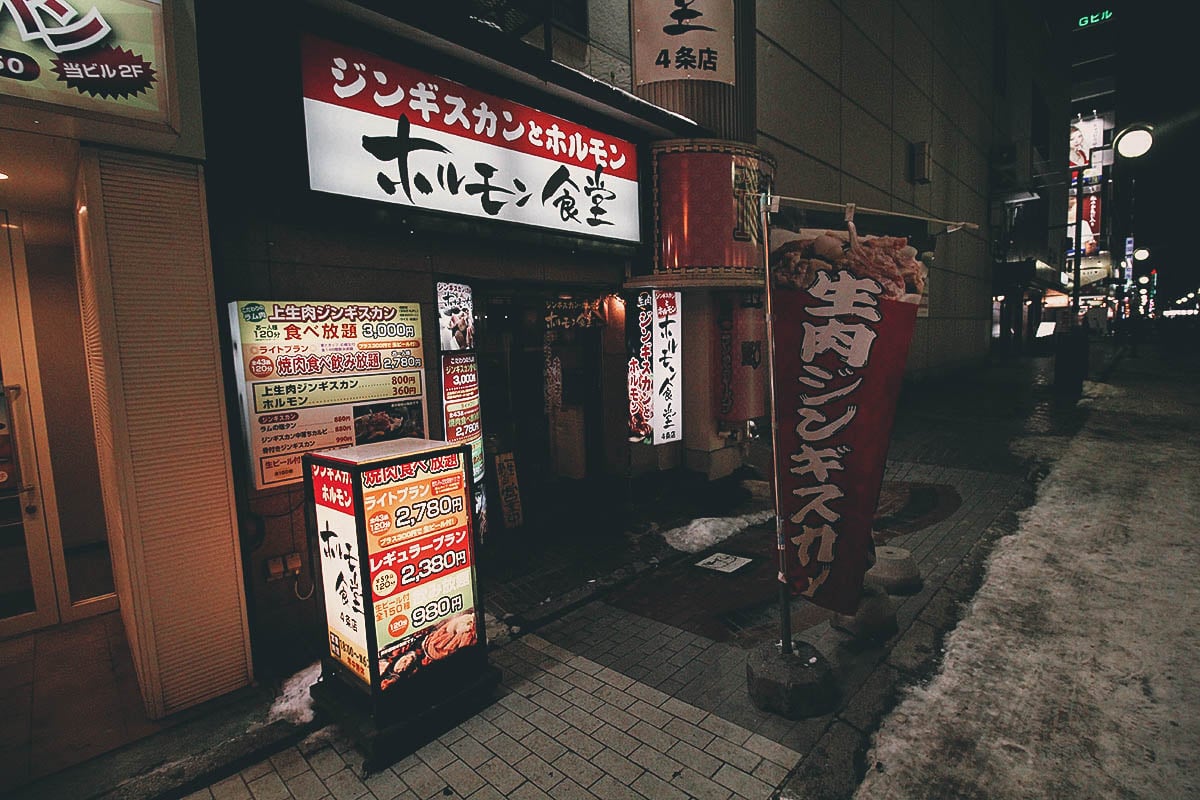 It’s a long and narrow restaurant with booths, counter seating, and sunken Japanese tables. See that poster on the right? You can get three draft beers for just JPY 980 if you order over JPY 3,000 worth of food. That’s basically giving you one free beer since draft beers usually cost JPY 500 in Japan. Awesome! 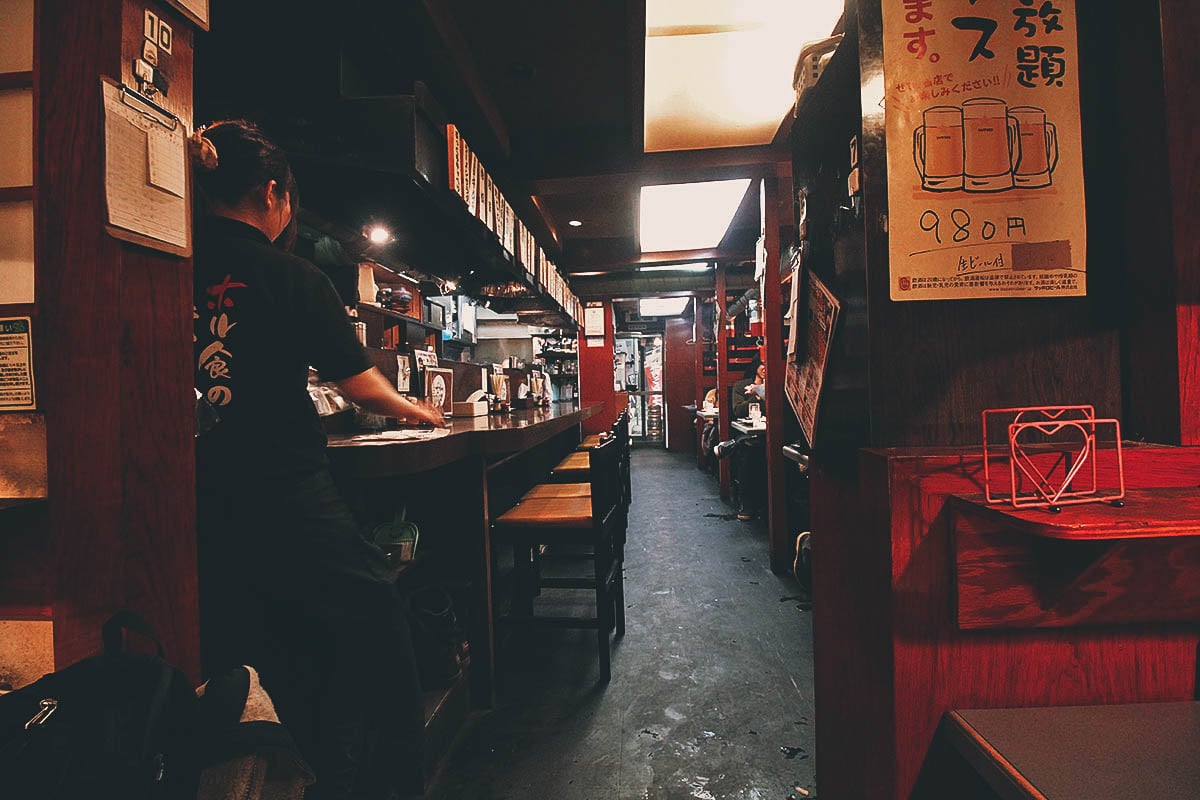 We went with one of these sunken tables. There are four at the far end of the restaurant with pull-down partitions between tables for privacy. 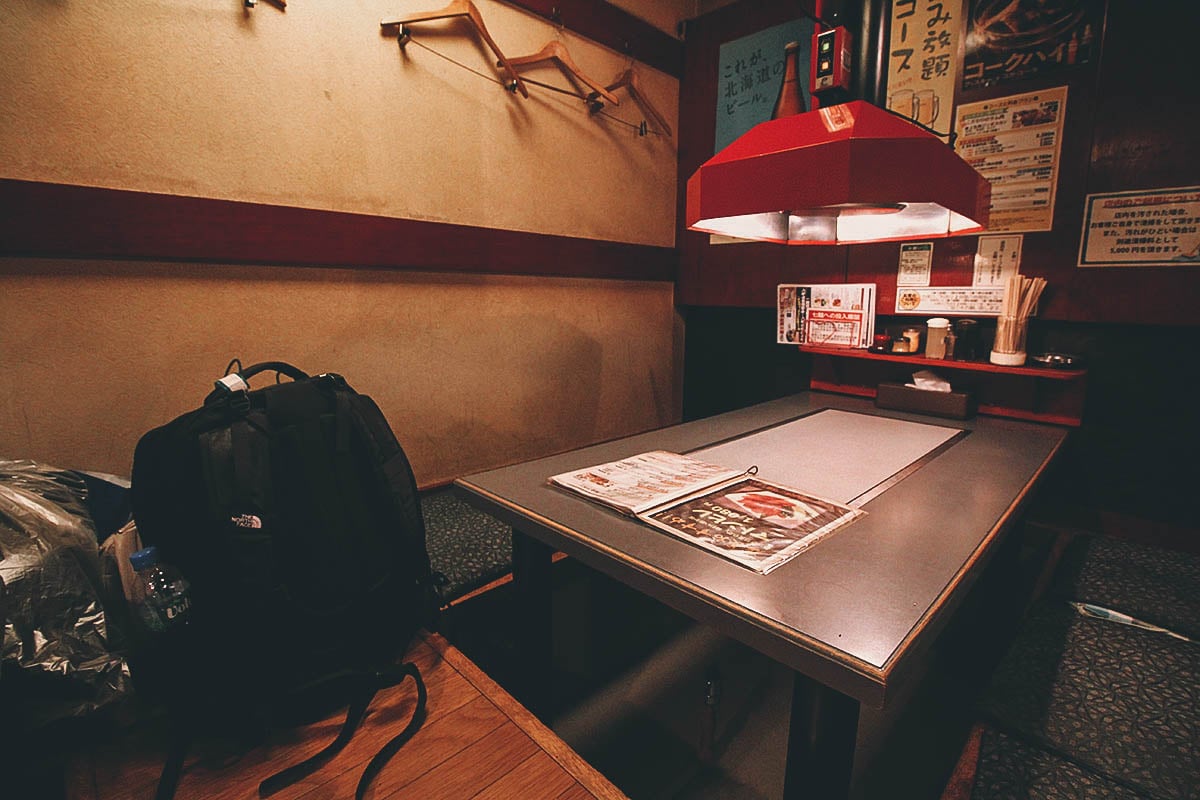 We were here for the lamb so that’s what we got. Aside from the tongue, I think we also got an order of the belly and shoulder. All prices listed below are before tax. 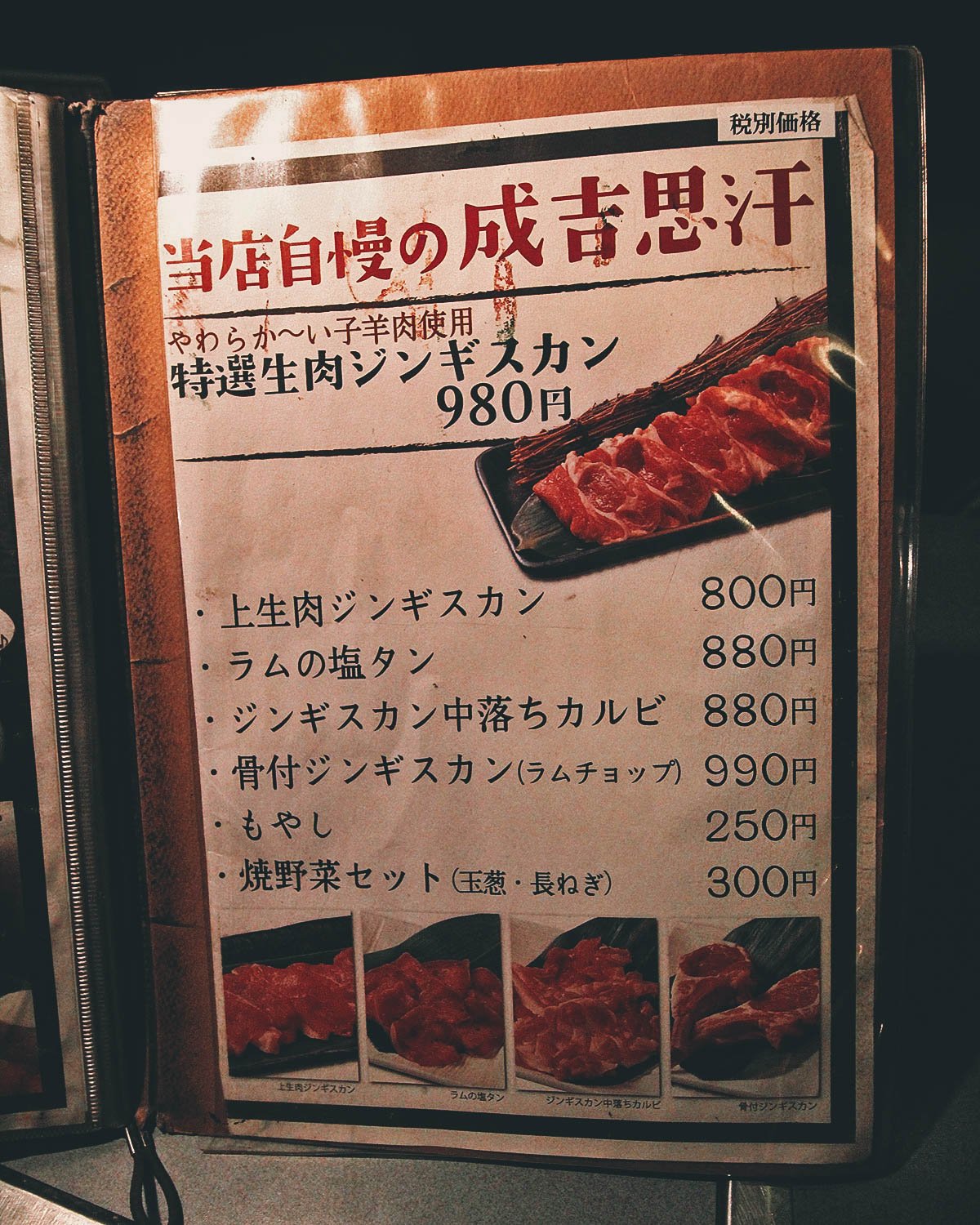 What we wanted – a wire grill over charcoals. Because jingisukan is traditionally served over a convex metal skillet, our server was going to give us that when we ordered the lamb. We asked if we could have it over a wire grill instead and she agreed. If you want to try jingisukan over this type of grill, then be sure to ask for it. 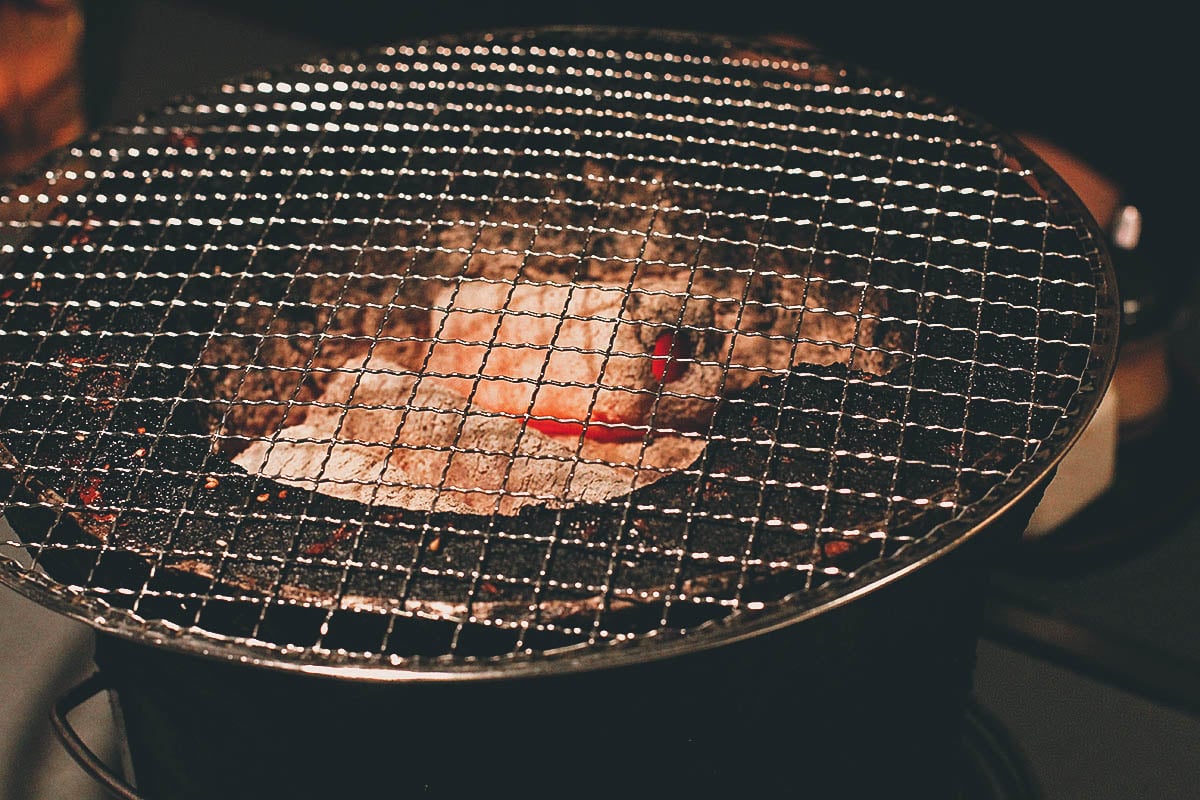 I think this was the lamb shoulder. 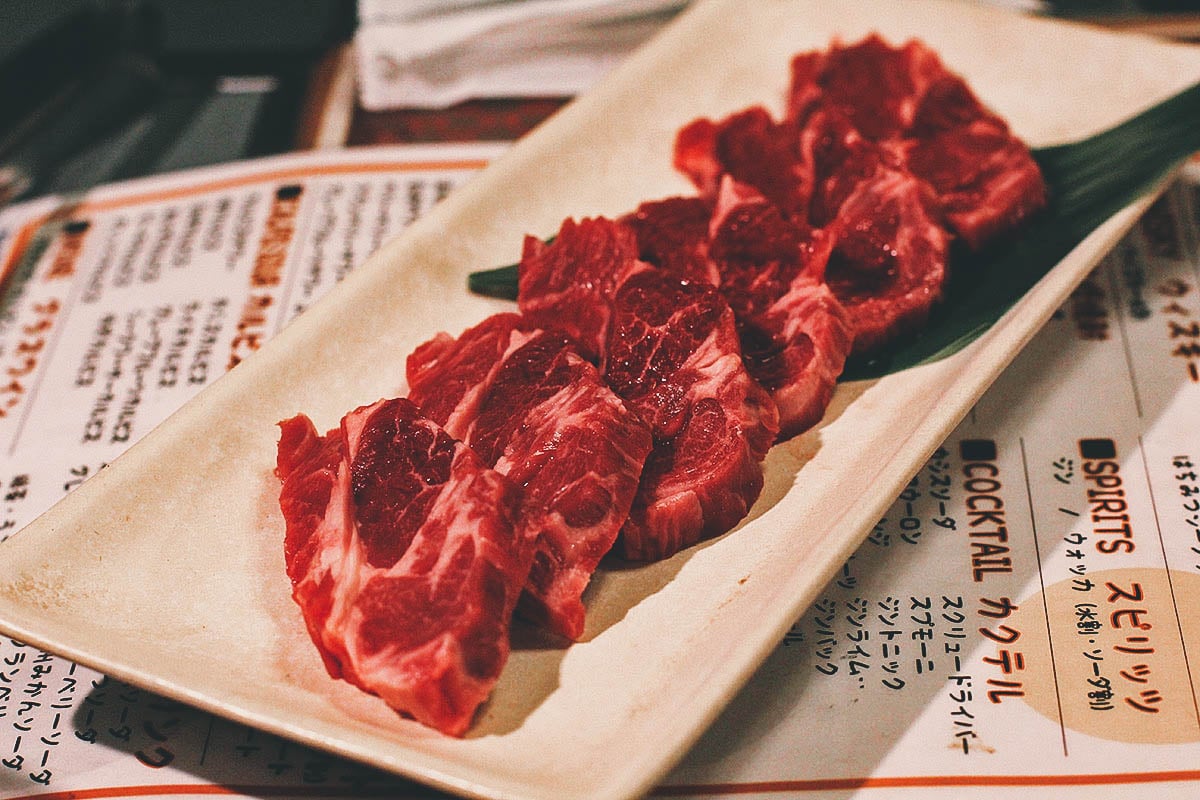 Lamb belly in the front, tongue at the back, and a bowl of kimchi to the side. I highly recommend you order some kimchi as well. It went so well with the meat and rice. 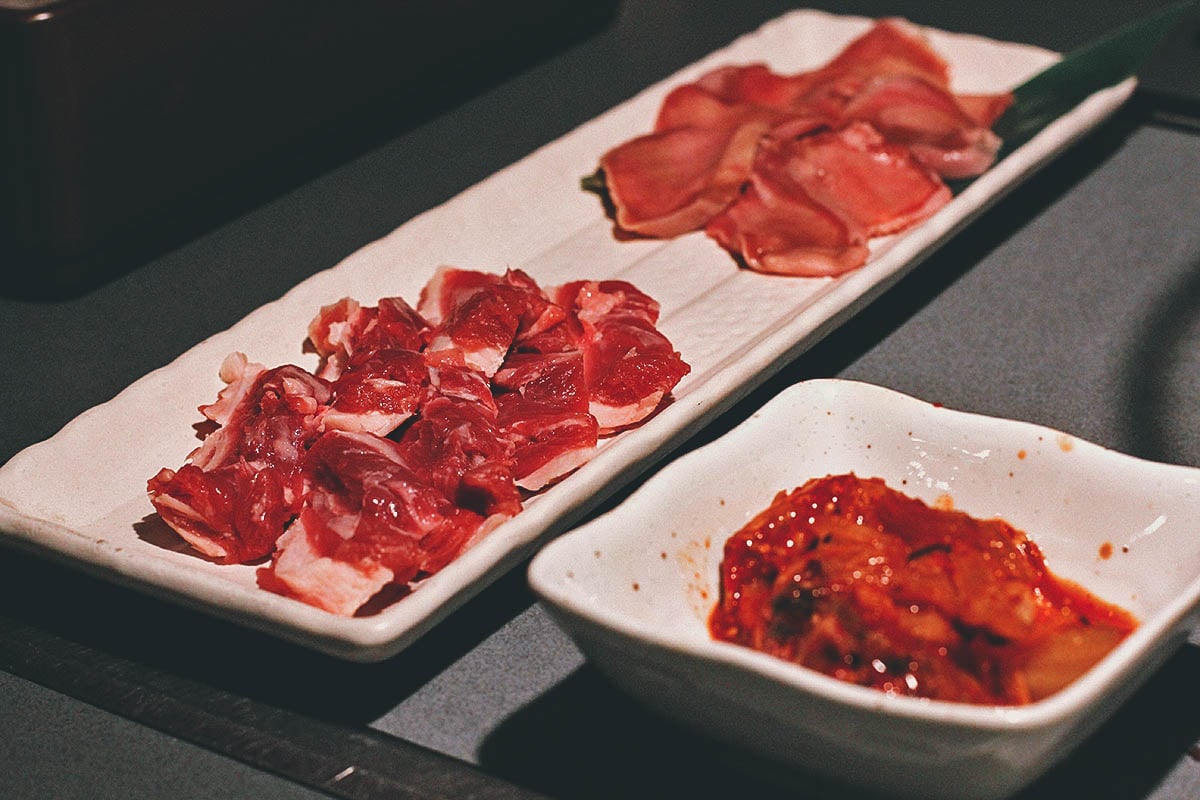 Grillin’ like a villain! Jingisukan or Genghis Khan is rumored to have gotten its name in prewar Japan, when lamb was thought to be the meat of choice among soldiers in Mongolia. This isn’t it but the dome-shaped skillet commonly used today is meant to represent the soldiers’ helmets which they allegedly used to cook their food. Interesting! You can see it in my Sapporo Beer Museum post.

I took some mouthwatering footage of the meat cooking as well which I’ll include in a “Things to Eat in Japan” video. If you think this looks good, wait until you see (and hear) the meat sizzlin’ like a villain. 😉 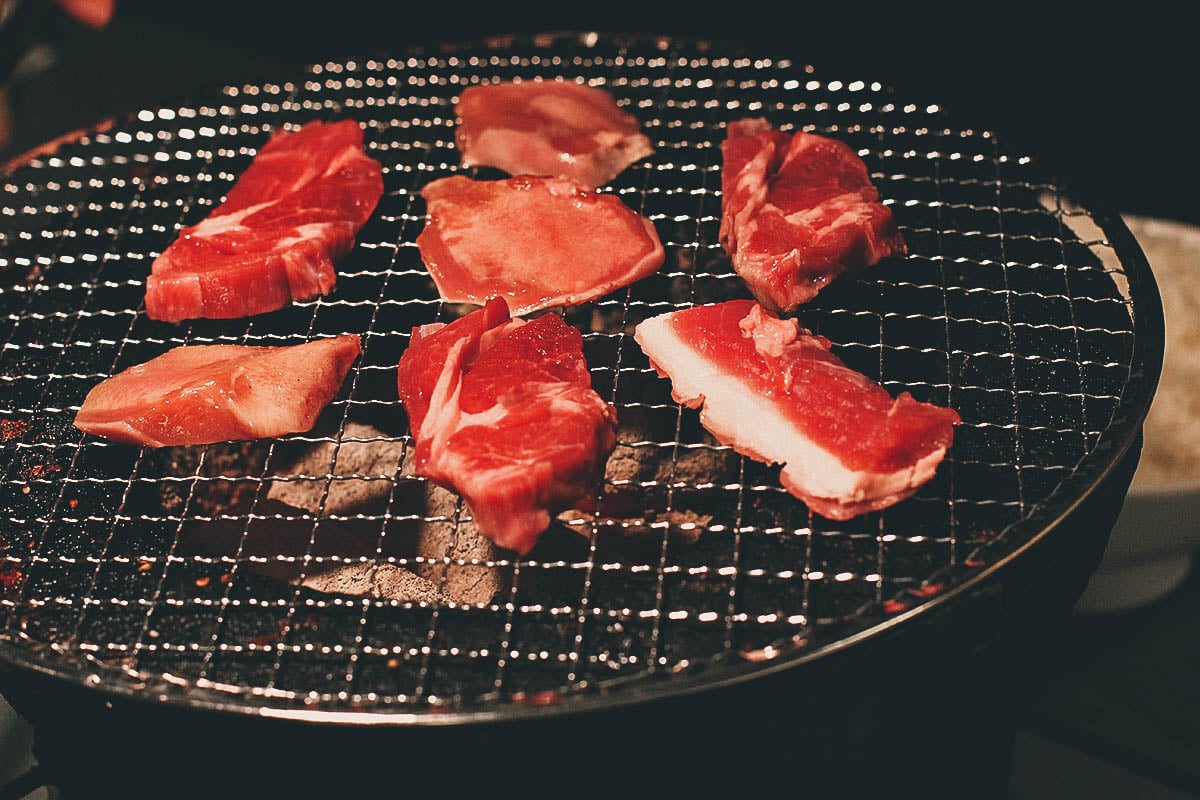 Once cooked, you dip the meat in the sauce… 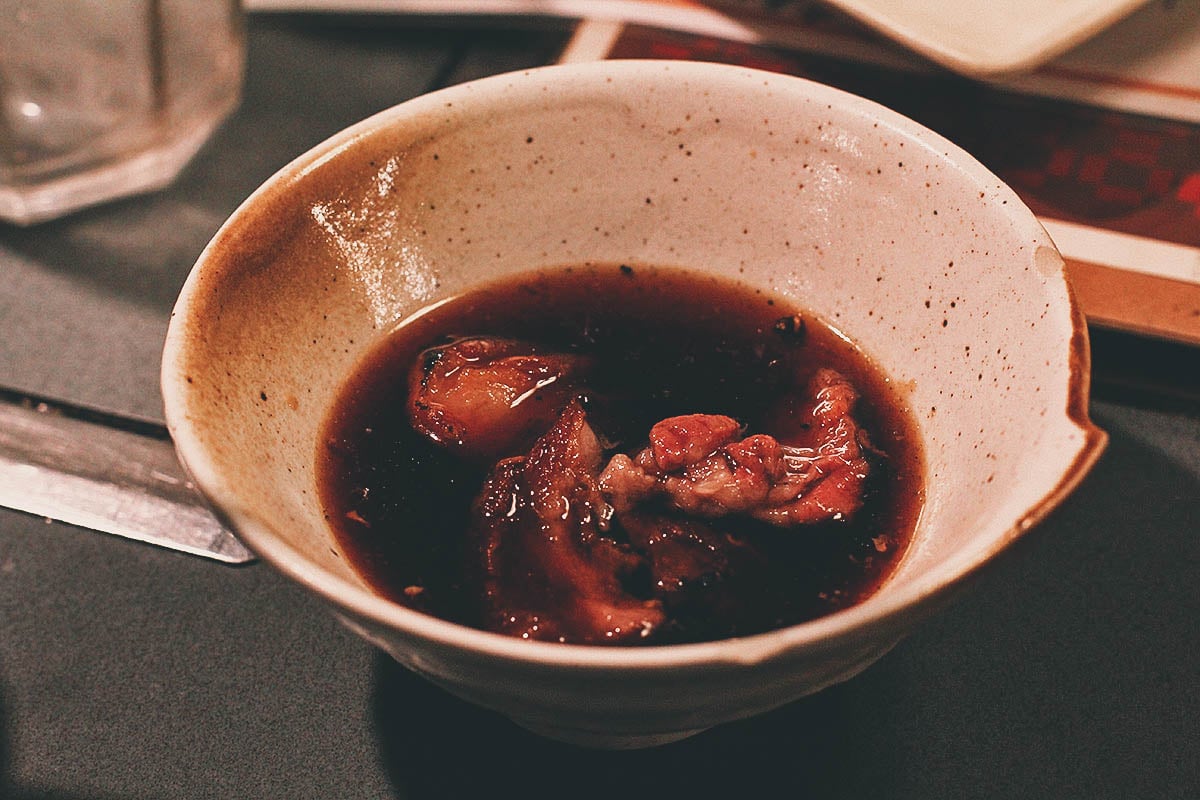 …then eat it with your rice. This was SO. DAMN. GOOD. Cooking over coals is way better than using a gas stove. It imparts that unbelievable charcoal flavor which you can’t get cooking any other way. The wire grill seems to help with the caramelization of the meat as well. More charred bits = more flavor and texture. Yum! 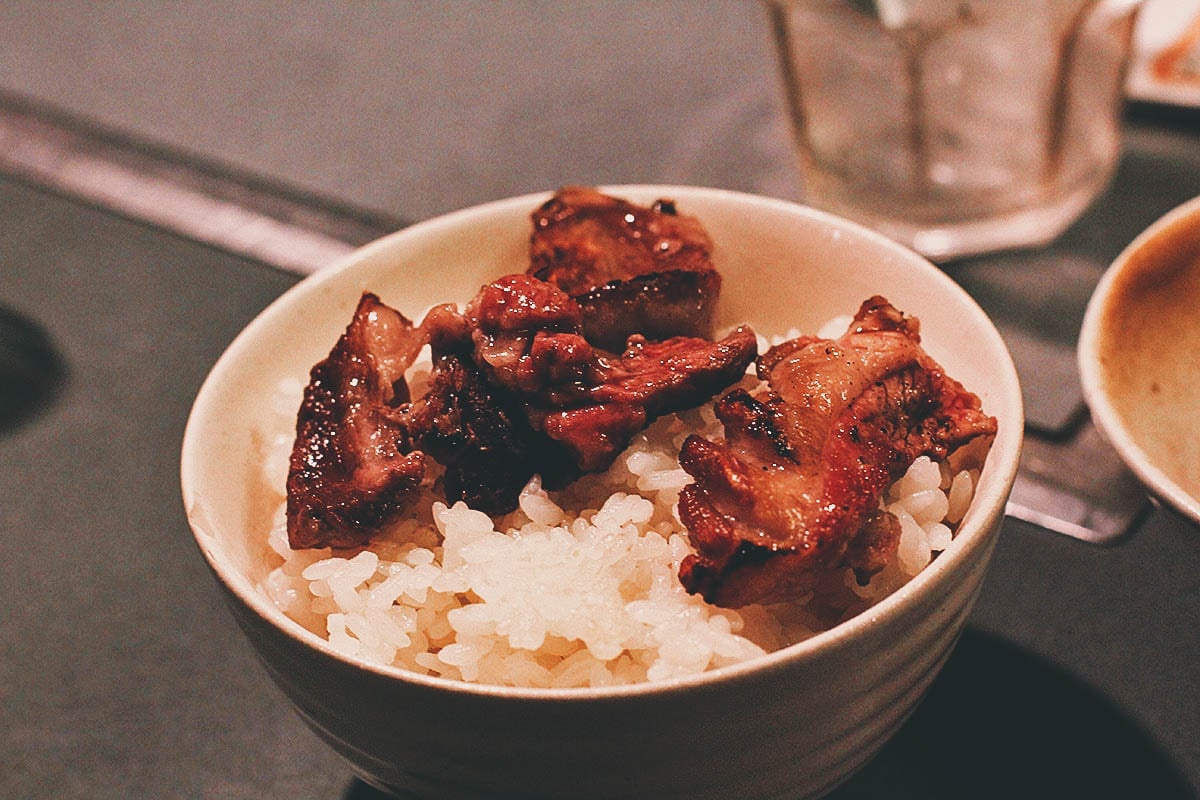 Three orders of meat weren’t enough for the three of us so we ordered two more and a bunch of veggies and shrooms. ♥ 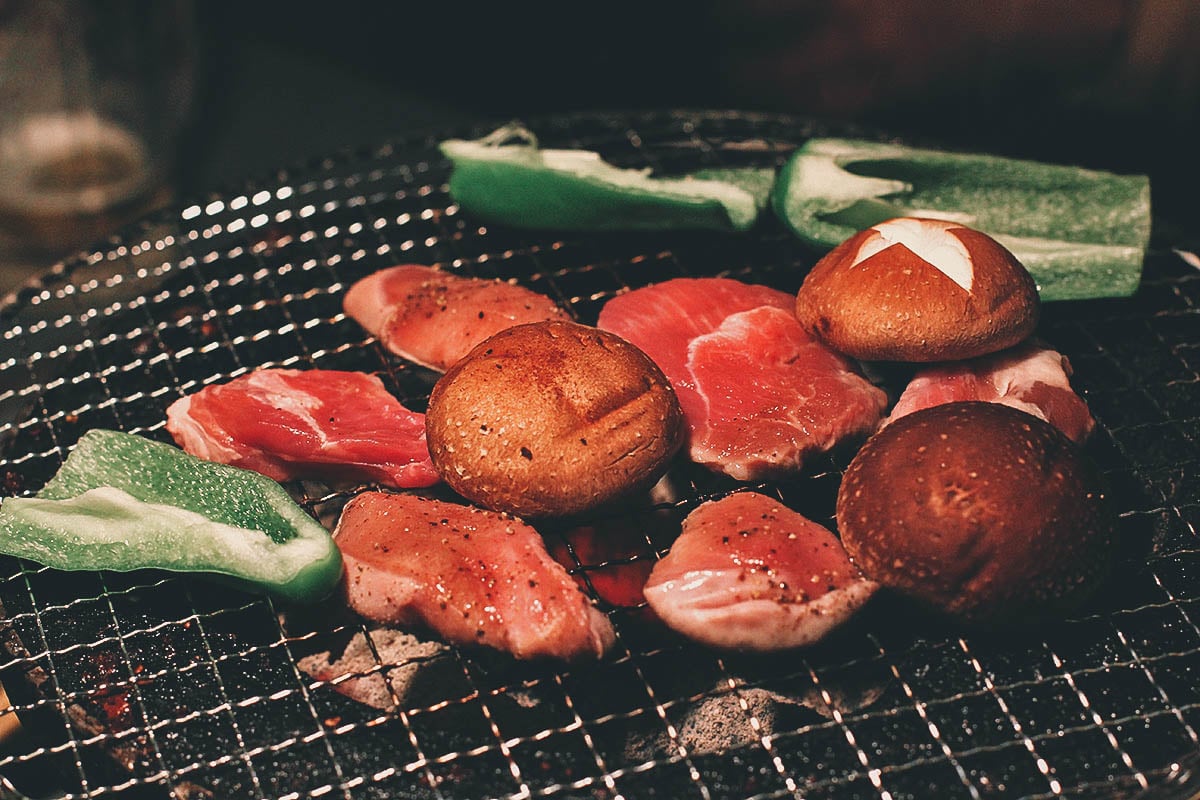 It wasn’t until after our trip and I started doing research for this restaurant did I learn that not only do they specialize in offal yakiniku, but they also offer an all-you-can-eat deal after 10PM. It’s true! After 10PM every night, you can have as much of the 33 yakiniku items and drinks on their menu for just JPY 2,380 (plus tax). If you have a big appetite and like to eat late, then this is definitely the way to go.

If you’re a carnivore, then there’s no doubt in my mind that you’ll enjoy Hokkaido’s famed jingisukan. You’ll probably want to have it more than once so be sure to try it both ways – on a convex metal grill and over a wire grill like this – just to see which method you prefer. Me? I enjoyed both. What’s more important than the grill I think is to find a place that cooks it over coals. The charcoal really does wonders for the taste. ♥

HOW TO GET THERE:
Take the subway to Susukino station. Exit the station and walk south. Make a right on the first street and the restaurant will be on your right. CLICK HERE to see its exact location on a map and get walking directions from where you are.