Food in Mongolia: 10 Traditional Dishes to Look Out For

Posted on Last updated: August 12, 2021 By: Author The Traveleaters

EDITOR’S NOTE: Traveleater Aminaa Ganbold, a writer from Ulaanbaatar, shares with us ten of the tastiest and most interesting traditional foods to look for in Mongolia.

But for travelers who’ve already been to Mongolia, the Mongolian steppe, Gobi Desert, and endangered animals like the snow leopard and takhi (Przewalski’s horse) will come foremost to mind.

The Mongolian-Manchurian grassland and its nomadic people attract many travelers to the country in summer, while people drawn to extreme weather will find winters in Mongolia to be a more interesting time to visit. But regardless of when you go are what you’re into, one thing you can always look forward to is traditional Mongolian food.

In this article, I’ll talk about ten of the tastiest and most interesting traditional dishes to look forward to on your next visit to Mongolia.

No time to read this Mongolian food guide now? Click on the save button and pin it for later! 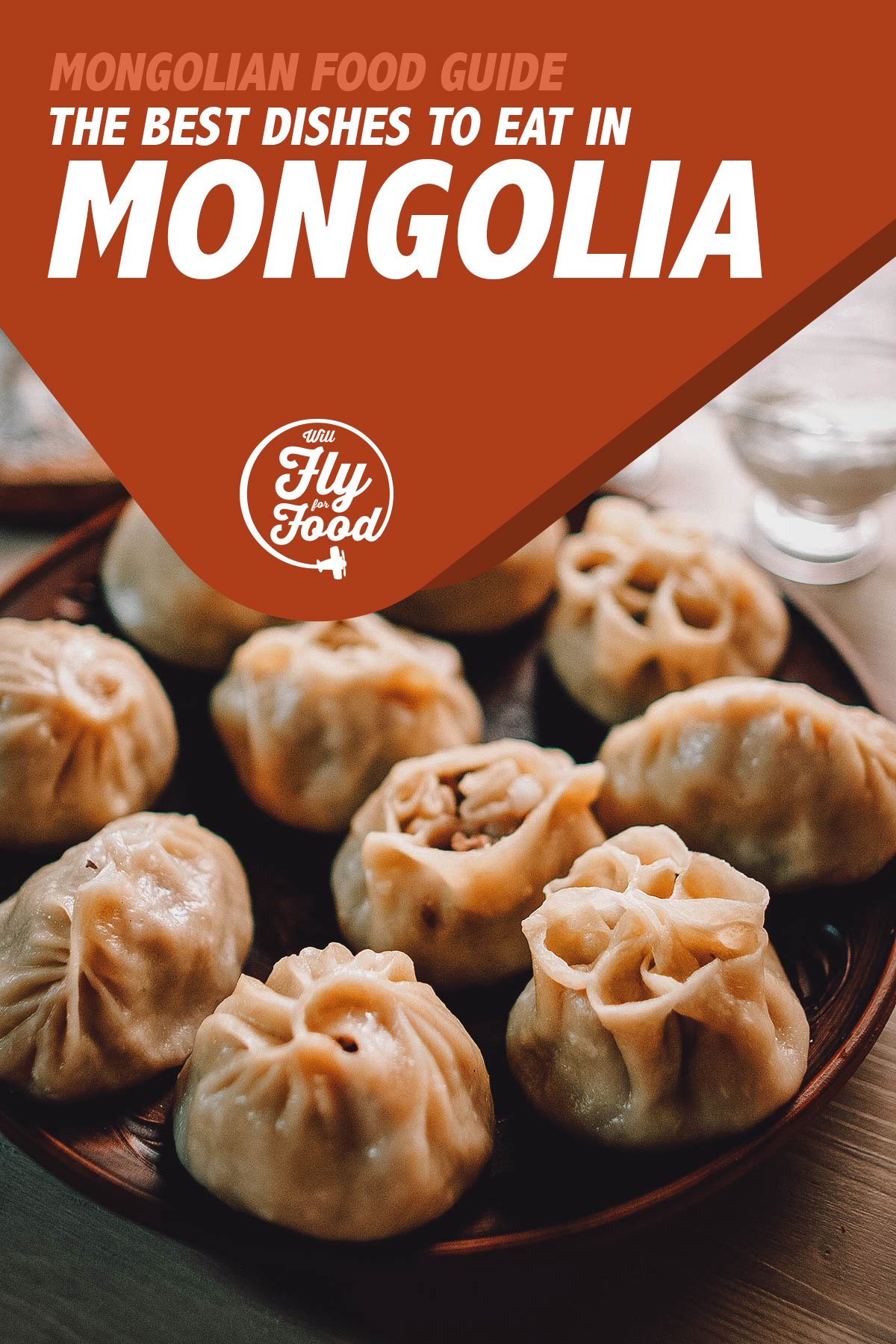 WHAT IS TRADITIONAL MONGOLIAN FOOD?

With a land area of roughly 1,564,116 square kilometres (603,909 square miles), Mongolia is one of the largest countries in the world. However, less than 1% of its land is used for agriculture. Its high altitude, extreme winters, and low precipitation make most of the country unsuitable for growing crops.

With about 30% of the population being nomadic or semi-nomadic, much of the agricultural sector continues to be heavily focused on nomadic animal husbandry. It was never easy for nomads to grow and harvest crops so most of their attention has been focused on rearing livestock.

While crops like corn, potatoes, barley, and wheat are produced in Mongolia, about 75% of the land is dedicated to pasture for the rearing of domestic animals like cows, horses, goats, sheep, and camels. As a result, meat figures heavily in traditional Mongolian food, much of which is seasoned lightly, often only with salt.

THE BEST OF MONGOLIAN CUISINE

If you’re a fan of meat-heavy dishes, then you’re going to enjoy Mongolian food. Listed below are ten traditional dishes to try on your next trip to Mongolia.

In winter, the country comes under the influence of the Siberian High so fatty Mongolian foods like buuz help people get through its harsh winters. Recipes vary from cook to cook but the dumplings are usually made with dough filled with a mixture of lamb, tail fat, and other ingredients like onions, victory onions, and caraway.

In Mongolia, you’ll find buuz in many forms. They get their names from how they’re folded and shaped like “flower buuz”, “sheep buzz”, or “lazy buuz”. As their names suggest, flower buuz resembles a flower while lazy buuz is the easiest and quickest to make.

To prepare, the dough is cut into pieces roughly the size of your palm. They’re rolled out flat and filled with the meat mixture before being folded and pinched shut. The dumplings are then steamed for about twenty minutes and consumed by hand.

Bansh refers to a smaller type of Mongolian dumpling, about half the size of the average buuz. It can be steamed and eaten on its own or added to soups.

One of the most interesting Mongolian dishes made with bansh is banshtai tsai, a type of milk tea with dumplings. Recipes vary but it’s typically made it with bansh, water, milk, flour, salt, and tail fat.

To prepare, a sheep’s tail is cut into pieces and then fried. Once it turns a golden brown color, a bit of flour is added to fry in the tail’s fat. Water is then added and brought to a boil.

At this point, you may think that it’s just soup with dumplings but it isn’t! Once the bansh is ready, we add it to the soup along with some salt and milk.

In Mongolia, we have a traditional drink called suutei tsai which is tea with milk. If you add bansh into suutei tsai, then it becomes milk tea with dumplings or banshtai tsai. It’s an interesting dish that you need to try in Mongolia.

You can think of khuushuur as the Mongolian version of chebureki, a Russian fried pastry filled with seasoned ground meat. It’s a Mongolian dish that was directly influenced by Russian cuisine.

The ingredients for khuushuur are very similar to buuz or bansh but it’s much larger, about 4-6 times bigger than the average buuz. It’s usually shaped in an oval or half-moon and is much oilier than the previous two dumplings because it’s deep-fried.

Khuushuur is the main dish served at Naadam, a traditional Mongolian festival that features competitions in three sporting events – wrestling, horse racing, and archery. Unlike homemade versions, the khuushuur served during Naadam are round.

Tsuivan is a type of Mongolian noodle dish made with meat and various vegetables. It’s traditionally made with mutton but other types of meat like beef or pork can be used as well.

To prepare, the dough is rolled out into a round flat sheet and poured over with some oil. It’s then cut into quarters and stacked before being sliced into strips about 0.4 cm (0.15 in) wide.

The noodles are placed over the meat and vegetables simmering together in a pot. The pot is covered tightly with a lid to allow the noodles to be steamed by the shallow layer of water boiling in the pot. After about 10-15 minutes, the noodles are cooked and the pot is tossed with the lid still on to thoroughly mix the ingredients.

Mongolian men love tsuivan so there’s a general saying that a woman’s abilities as a housewife can be determined by how well she makes tsuivan. If she can cook it well, then chances are she’ll make a great housewife.

One interesting type of guriltai shul you should try in Mongolia is tasalan guriltai shul. It’s a simply seasoned noodle soup made with boiled lamb or beef bones, salt, and short flat noodles cut by hand. In some cases, the flattened sheets of dough are fried first before being cut into strips.

Compared to other countries that typically form their noodles into long strands, Mongolians don’t have a preference to the shape or length of their noodles. As long as it tastes good, then noodles can be short or long, narrow or wide, thick or thin.

Borts refers to the Mongolian version of jerky. Before cold storage was invented, Mongolians would expose fresh meat to the cold air to dry and preserve it. Lamb and horse meat weren’t as suitable for preservation so borts was typically made with beef, goat, or camel meat.

This method of food preservation was ideal for the nomadic lifestyle because it allowed meat to last for a long time, about 1-3 years. It was also just a fraction of the weight of fresh meat, making it much easier to transport. 1 kg (2.2 lbs) of fresh meat and bone would produce about 214 grams (7.5 oz) of borts.

Borts is an ingredient in many Mongolian recipes. It’s used in soups, dumplings, and many other Mongolian dishes. It was even brought to space as a food source by Mongolia’s first astronaut Jügderdemidiin Gürragchaa.

During the era of Genghis Khan, borts was an invaluable food source that provided sustenance to Mongolian soldiers in times of war.

To make khorkhog, the meat and vegetables are placed in a milk churn which is used like a pot. River stones are then heated in a fire and added to the pot, followed by water which produces steam to cook the vegetables and meat. It’s a method of cooking that was invented by nomadic Mongolian tribes and is still used by families living in the countryside.

When the khorkhog is ready and the stones have cooled down a bit, Mongolians will take the stones and rub them in their hands. They do this because they believe the heated stones have healing effects. If you get the chance to try khorkhog in Mongolia, then you should do the same.

Boodog refers to a unique method of preparing meat in Mongolia. It’s similar to khorkhog but it doesn’t make use of a milk churn or pot to cook the meat. In fact, it doesn’t use any type of cookware at all. Instead, boodog is made by cooking the meat in the animal’s own skin.

Mongolian nomadic warriors carried what they could on horseback. They couldn’t be weighed down by heavy cookware so they devised a method of cooking meat and vegetables using the animal’s carcass.

Boodog was traditionally made with any type of animal but these days, it’s made only with lamb or goat. The most difficult part was removing the meat, bones, and organs without tearing the skin. The meat is then seasoned and stuffed back in the carcass with vegetables, heated river stones, and water before being sealed shut to cook.

In ancient times, boodog would be roasted over an open fire to scorch the fur, but modern cooks now use blowtorches. Any leftover fur gets scraped away with a knife. When the opening that was sealed shut starts to drip with hot fat, then you’ll know that the boodog is cooked and ready to eat.

Boodog is an ancient dish that’s highly respected in Mongolia. In fact, Mongolians have a saying about boodog that goes something like this: “People who make and eat Boodog together will be best friends for life”.

Boortsog is a type of fried dough snack popular in Mongolia and Central Asian countries like Kazakhstan, Kyrgyzstan, and Uzbekistan. It’s available throughout the country with every province having its own unique spin on the dish.

Recipes for boortsog vary but it’s generally made with a dough consisting of flour, butter, water, salt, and sugar. The dough is cut and formed into various shapes like spheres, rectangles, or strips before being deep-fried to a golden brown. When ready, they can be eaten plain with tea or enjoyed with butter, honey, or cheese.

Airag is made by filtering fresh mare’s milk through a cloth and pouring it into a leather sack called a khukhuur. The milk is repeatedly stirred for 1-2 days with a wooden masher called a buluur until its ready to drink. Slightly sour but pleasant in flavor, it’s often the first drink offered to guests as a show of hospitality.

Airag has an alcoholic content of about 2% and is known to be a rich source of vitamins and minerals.

Mongolians use meat in nearly every dish so you’ll have no trouble enjoying Mongolian food if you like eating meat. As previously described, seasonings are used sparingly in Mongolian cooking. Meat dishes are often seasoned lightly using just salt to allow the natural flavors of the meat to shine.

Because of the country’s long and cold winters, Mongolians consume a lot of animal fat to pack on the calories and help get them through the winter. Their nomadic ways demand that they maintain a simple lifestyle. Belongings and kitchen supplies must be kept to a minimum.

It isn’t a lifestyle for everyone, but visit Mongolia and you’ll find a happy and content people well-connected to their land. If you enjoy nature and simple living, then there’s much to fall in love with in Mongolia.