On Sultans, Concubines, and an 86 Carat Diamond at Topkapi Palace in Istanbul, Turkey

If only these walls could talk, what sordid tales they’d tell. Home to libidinous sultans, overbearing queen mothers, and scheming concubines and eunuchs, intrigue and scandal were surely the norm here.

The court of the Ottoman Empire from the 15th to the 19th centuries, Topkapi Palace is the second most visited tourist destination in Istanbul, behind only Ayasofya. It’s comprised of four sprawling courtyards and a lavish Harem spread out over an area covering 700,000 sq m (7.5 million sq ft). Visiting its many rooms and reading about its stories gives you a fascinating glimpse into the lives of Ottoman royalty.

There’s much to explore at the Palace so you can spend a couple of hours or an entire afternoon here depending on your level of interest. For those pressed for time, the Harem and the Treasury can’t be missed.

Rococo-style fountain located just outside Babı Hümayun, the Imperial Gate to the Palace. Entrance to Topkapi is included in the 5-day Istanbul Museum Pass. Otherwise, admission is 60TL. 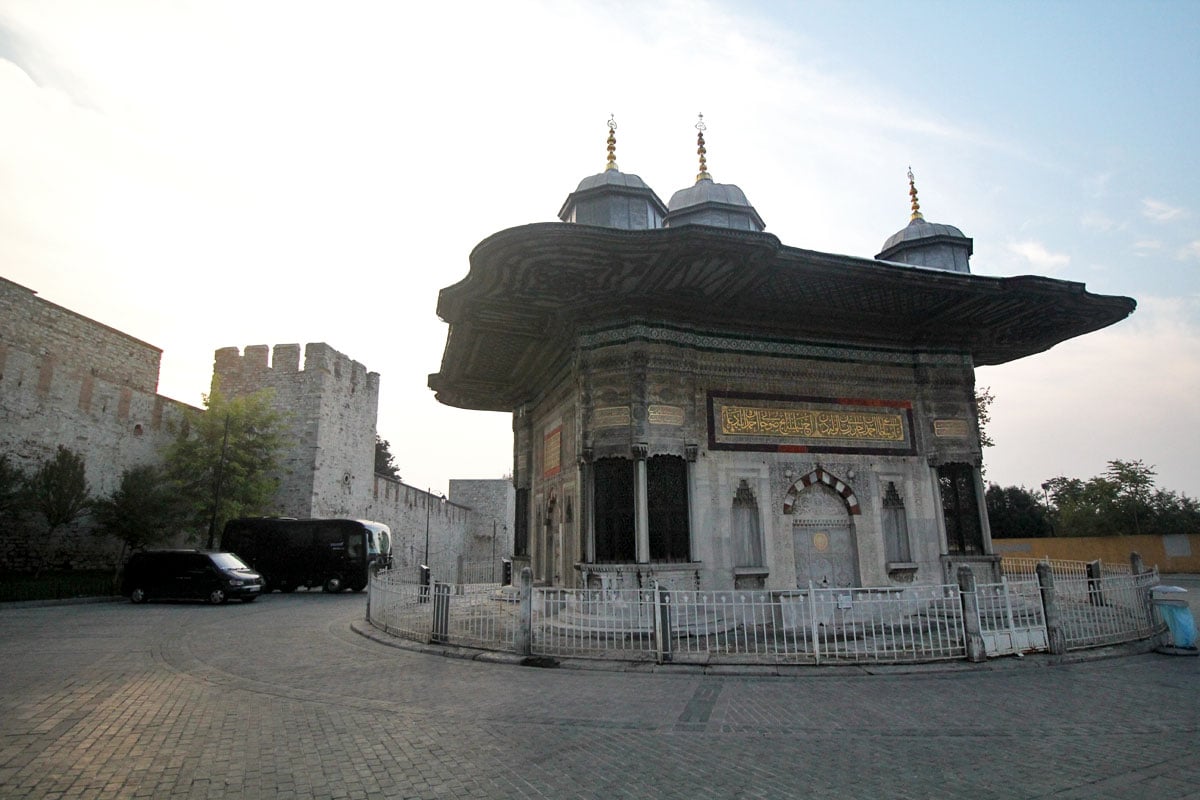 Once you walk through the Imperial Gate, you’ll find yourself in the First Courtyard also known as the Court of the Janissaries or the Parade Court. On your left you’ll see this Byzantine church, Hagia Irene. Entrance is an additional 30TL so only go if you can get in for free with the 5-day Istanbul Museum Pass. There wasn’t much there when we went, so it isn’t worth the extra price of admission in my opinion. 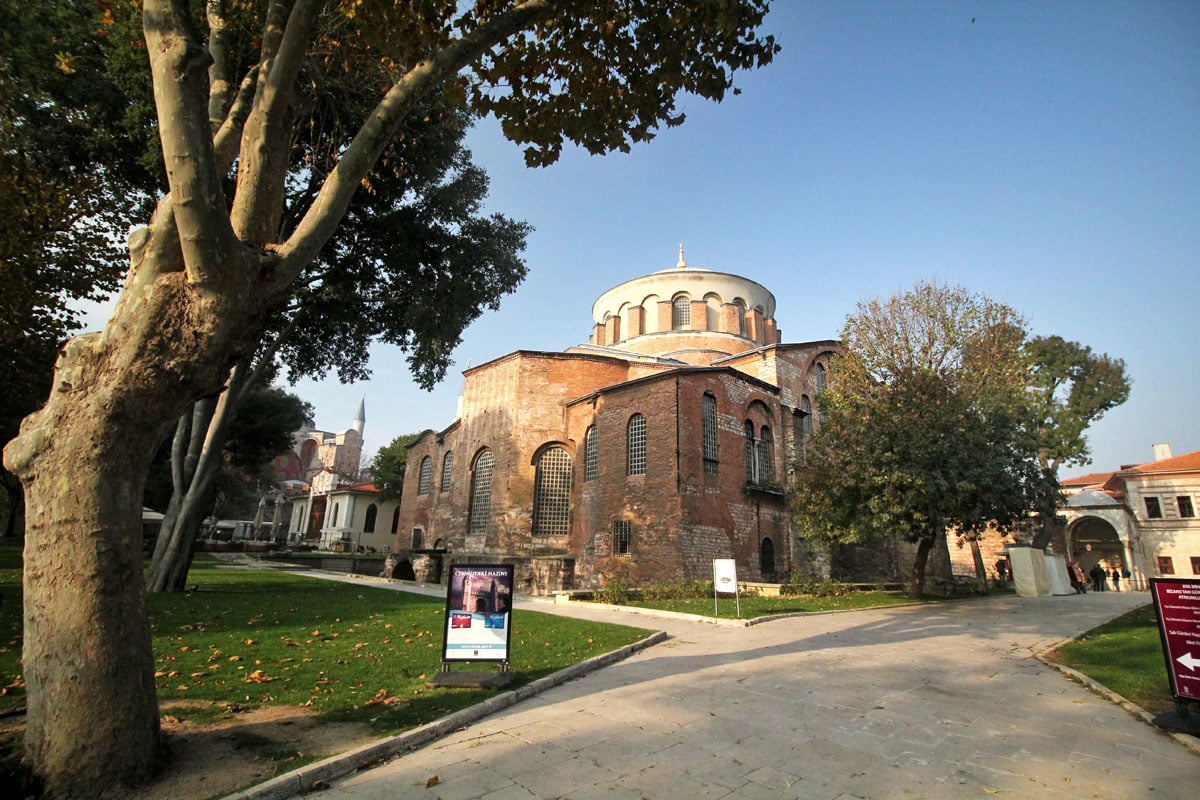 Walking across the First Courtyard, you’ll get to another gate called Babusselam or the Gate of Salutation. It resembles a castle and leads you into the Second Courtyard. In Ottoman times, only the Sultan and his mother were allowed to enter through this gate on horseback. Everyone else had to dismount. 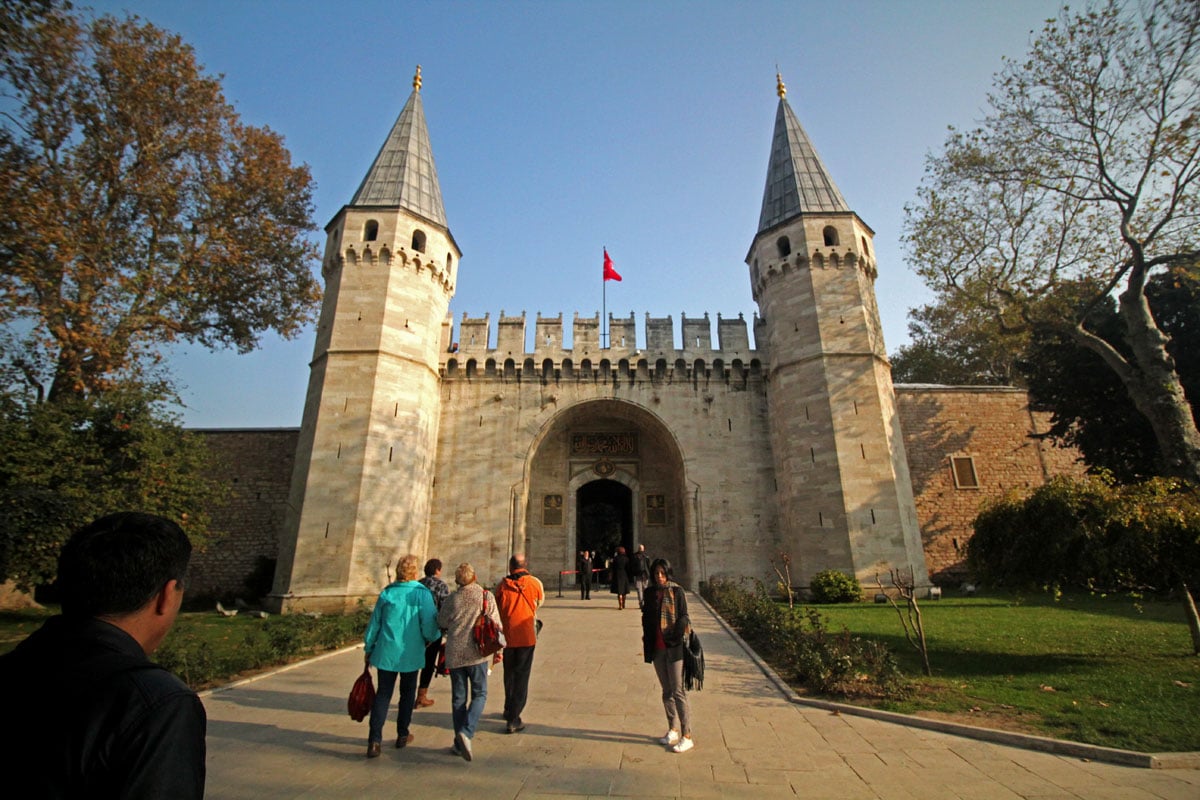 The Second Courtyard was the administrative center of the Ottoman Empire and where palace ceremonies were held. Pictured here is the Tower of Justice and the Carriages’ Gate to the Harem. 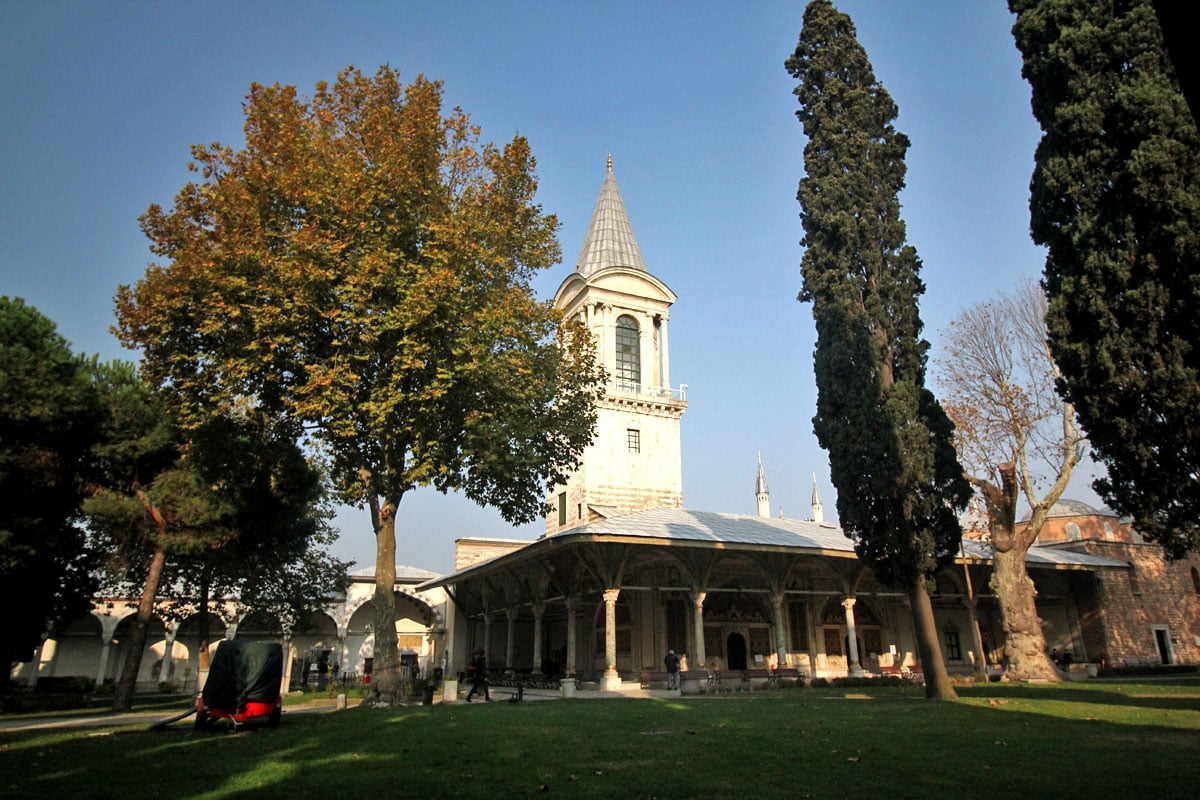 The Harem is one of the highlights of Topkapi Palace. If you only have a couple of hours to spare, then you should spend them here. Entrance to the Harem is an additional 35TL, but it’s free with the 5-day Istanbul Museum Pass. They only allow a certain numbers of visitors at a time so if you arrive when the Palace opens at 9AM, then you should go straight here to avoid the lines. 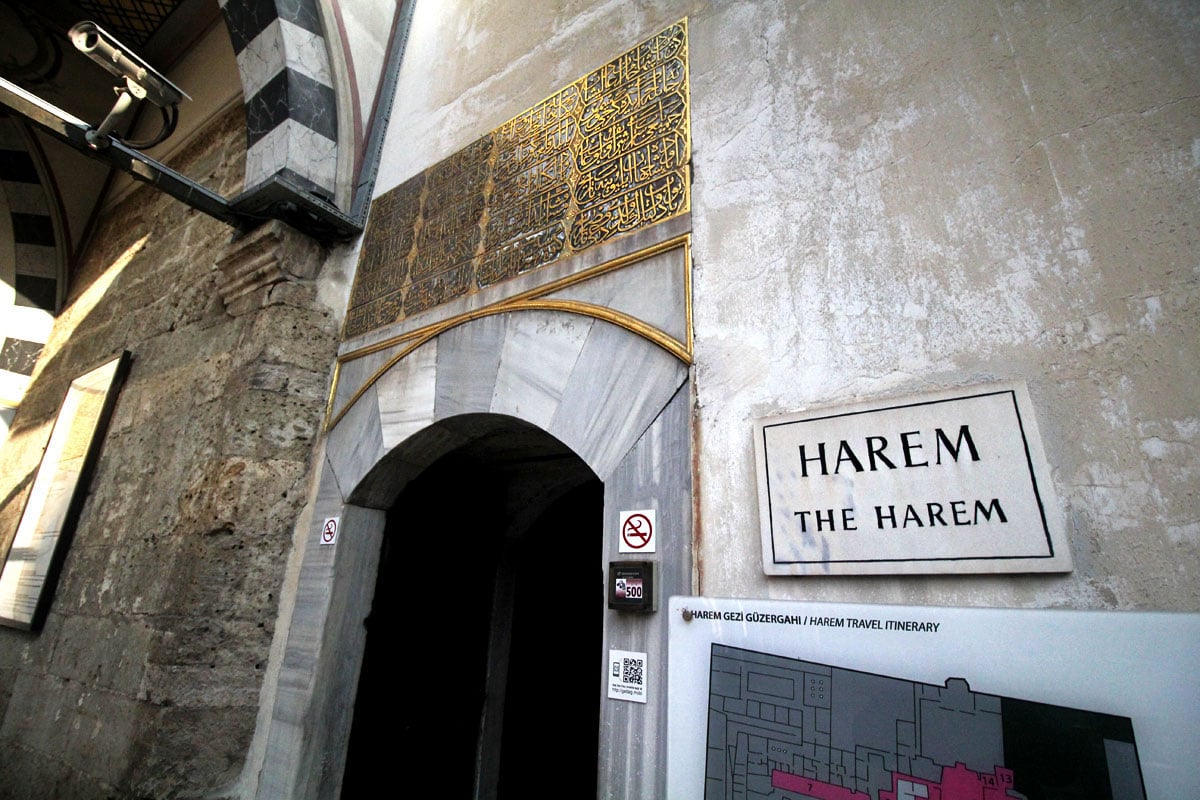 It was interesting to learn that a harem wasn’t by definition a place where the Sultan could engage in debauchery as popular belief would have it. In reality, it was the imperial family quarters. The word harem literally meant “forbidden” or “private” and referred to a holy place that not everyone was allowed to enter. I guess all that privacy really sent people’s imaginations soaring.

The sultan was allowed by Islamic law to have four legitimate wives. Each wife received the title of kadın. If a kadın bore him a son, then she’d be called haseki sultan. If she bore him a daughter, then she’d be referred to as haseki kadın. 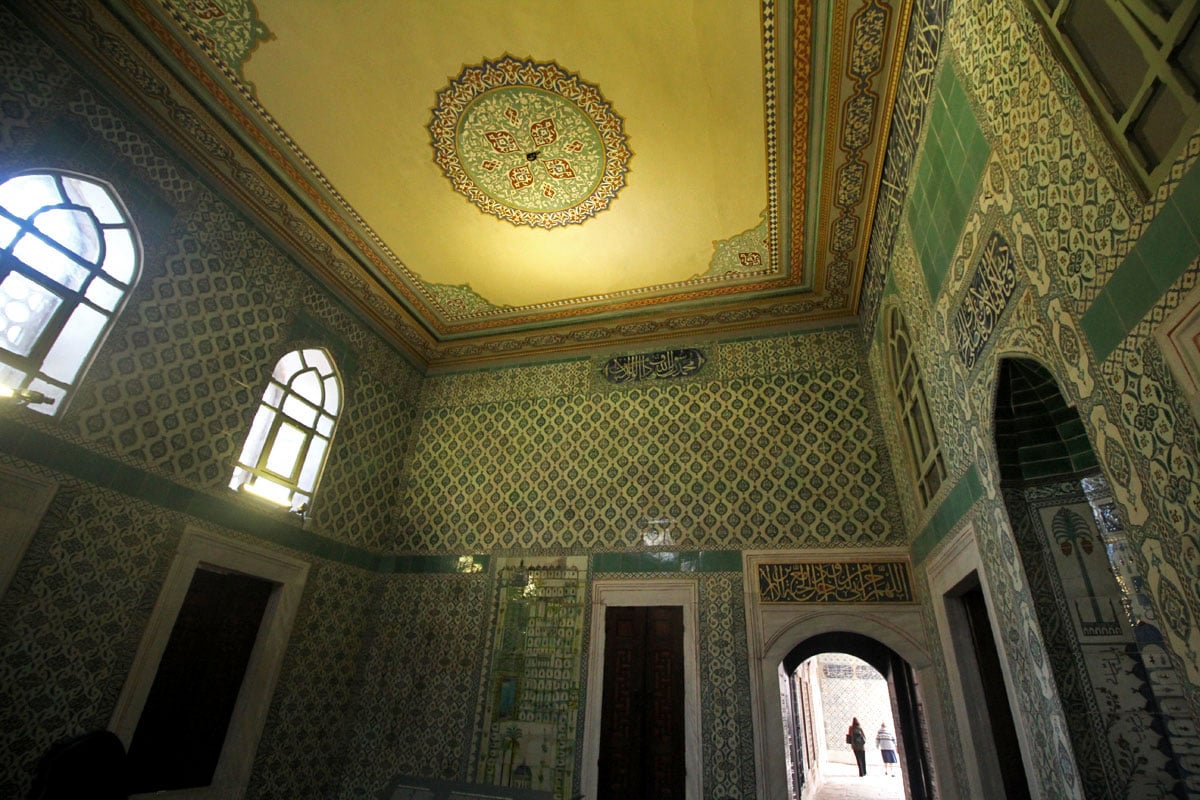 The picture on the left shows the main entrance which separated the Sultan and his family/concubine’s quarters from the Courtyard of the Eunuchs. The picture on the right gives you a glimpse into the Queen Mother’s room.

The Queen Mother, or Valide Sultan, enjoyed much power and was considered the highest authority in charge of the Harem. Especially powerful in the 17th century when many of the Sultans ascended the throne at very young age, the Valide Sultan often owned large estates in her own name and was able to give direct orders to the Grand Vizier (prime minister). As such, her influence on the sultan — on the selection of his wives and concubines and on matters of state — was often profound.

“Be nice to the Queen Mother my little concubine, because she WILL eat you.” 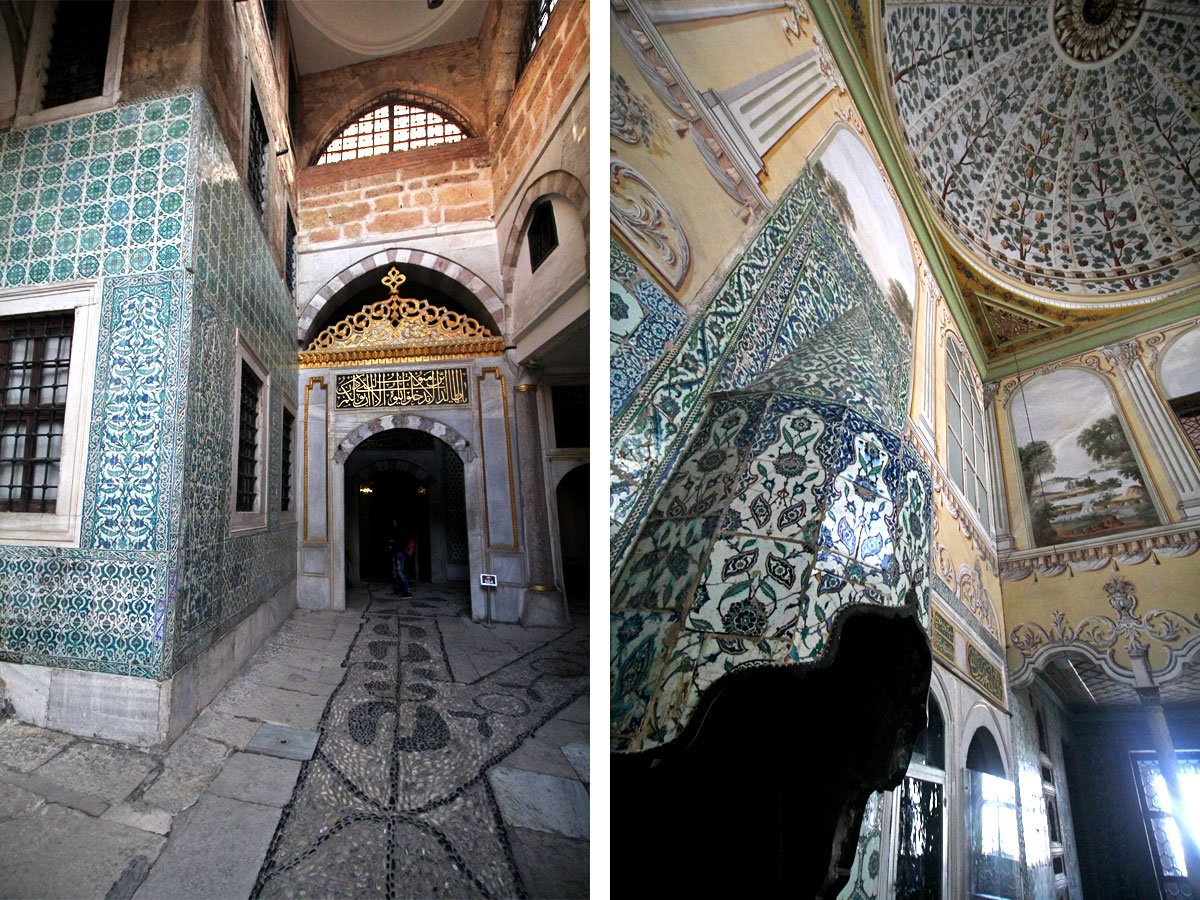 As many as 200 eunuchs lived in Topkapi Palace. They guarded the doors and waited on the women of the Harem. White eunuchs were used in the early days of the empire, but black eunuchs — who were sent as presents by the Ottoman governor of Egypt — later took control. 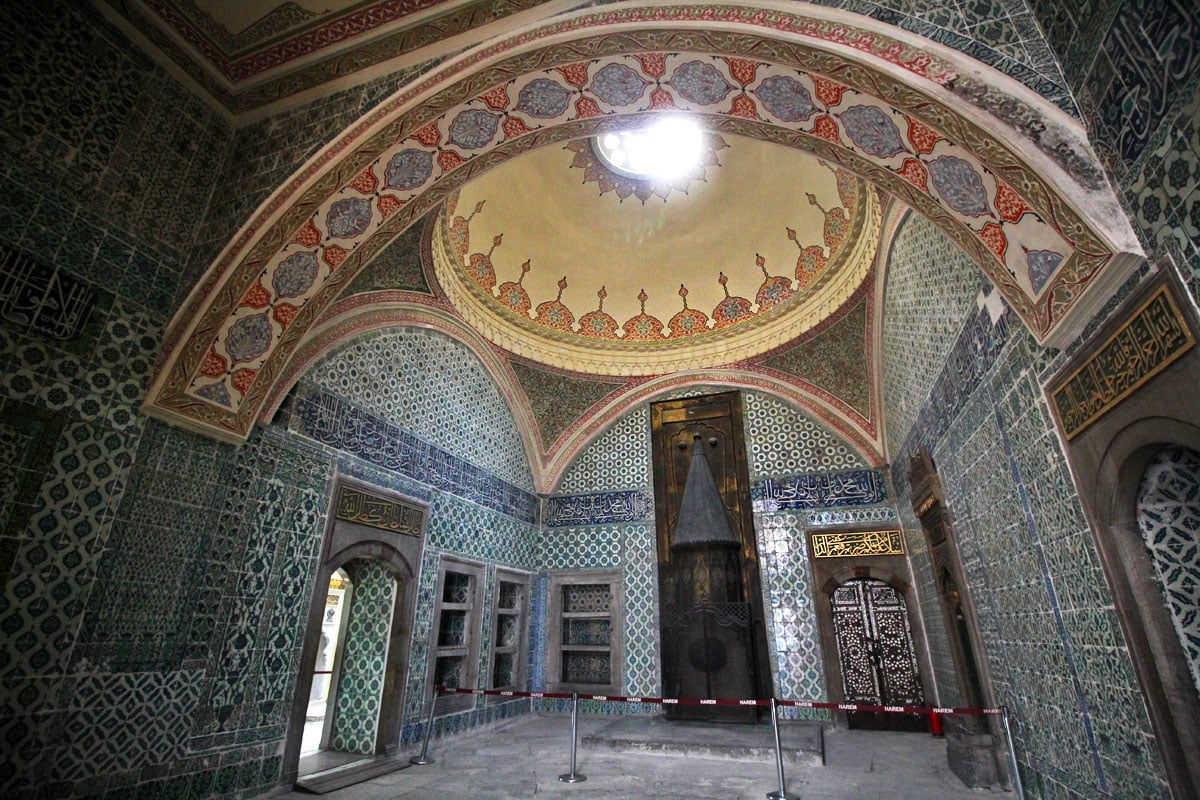 The Hall with Fountain

This vestibule was where princes, the Valide Sultan, and senior concubines waited before entering the Imperial Hall for an audience with the Sultan. Pictured here is an ornamental fountain and niches in the walls for turbans. 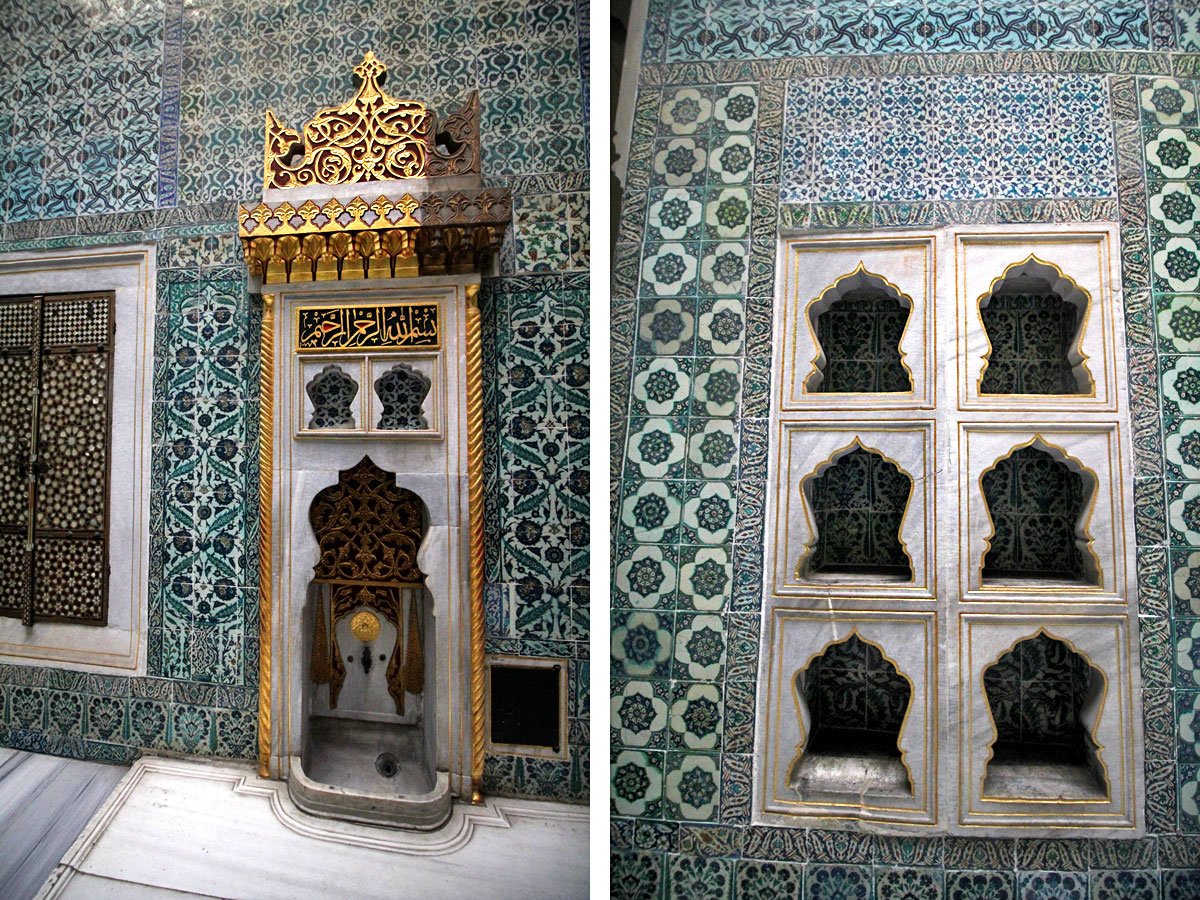 Possibly the most striking room in the Harem, the Imperial Hall is the largest domed space in the Palace. It was where weddings, ceremonies, and receptions were usually held. The amount of detail here, and pretty everywhere else in the Palace, is extraordinary. 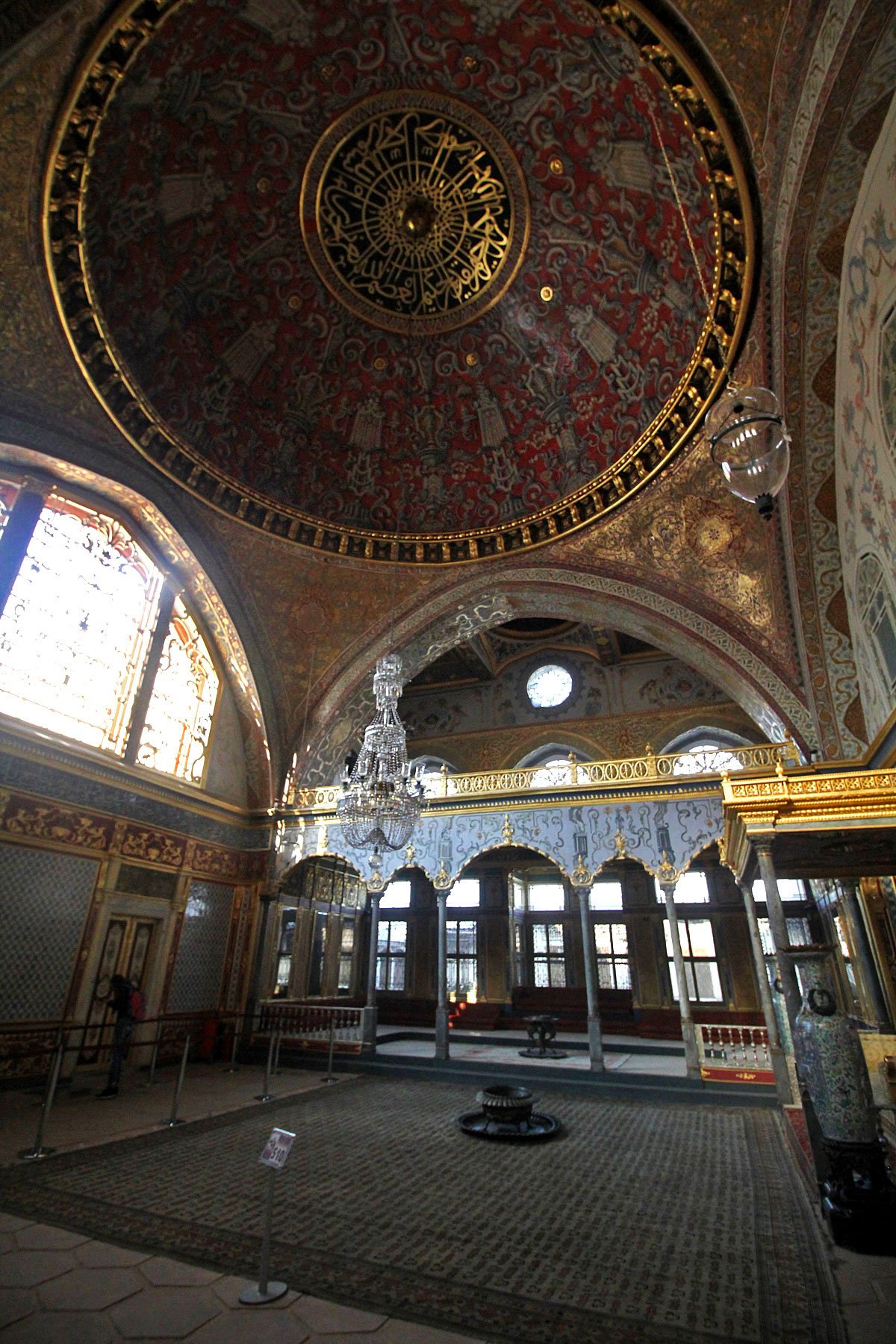 This pair of dark rooms with ornate stained glass windows were the twin chambers of the crown princes. 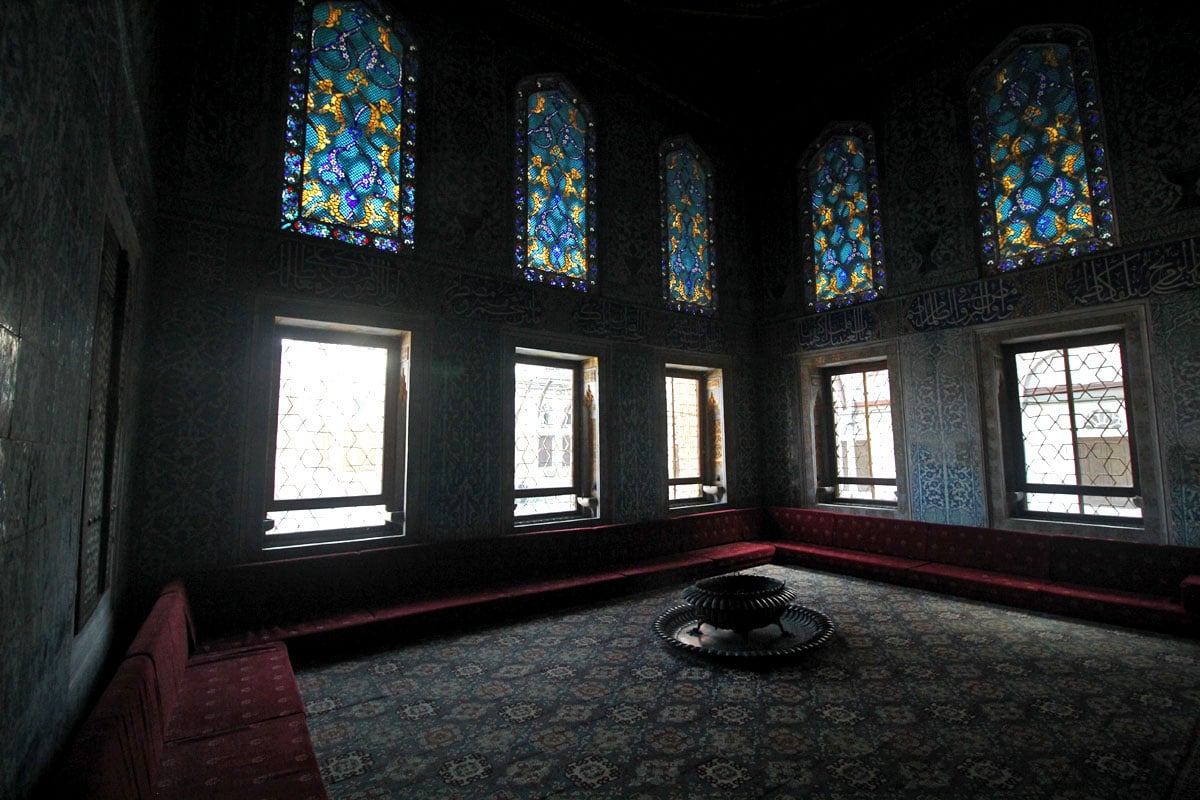 Apartments of the Sultan’s Favorites and the Mabeyn Courtyard

To the right are the apartments of the Sultan’s favorite concubines. Girls brought into the Harem would be schooled in Islam and Turkish culture and language, as well as in various arts like make-up, dress, music, writing, embroidery, and dancing. When ready, they would enter a meritocracy — first as ladies-in-waiting to the sultan’s concubines and children, then to the Valide Sultan. If a concubine was particularly attractive and talented, then she’d be called upon to serve the Sultan himself. The Sultan was allowed to support as many as 300 concubines in the Harem. 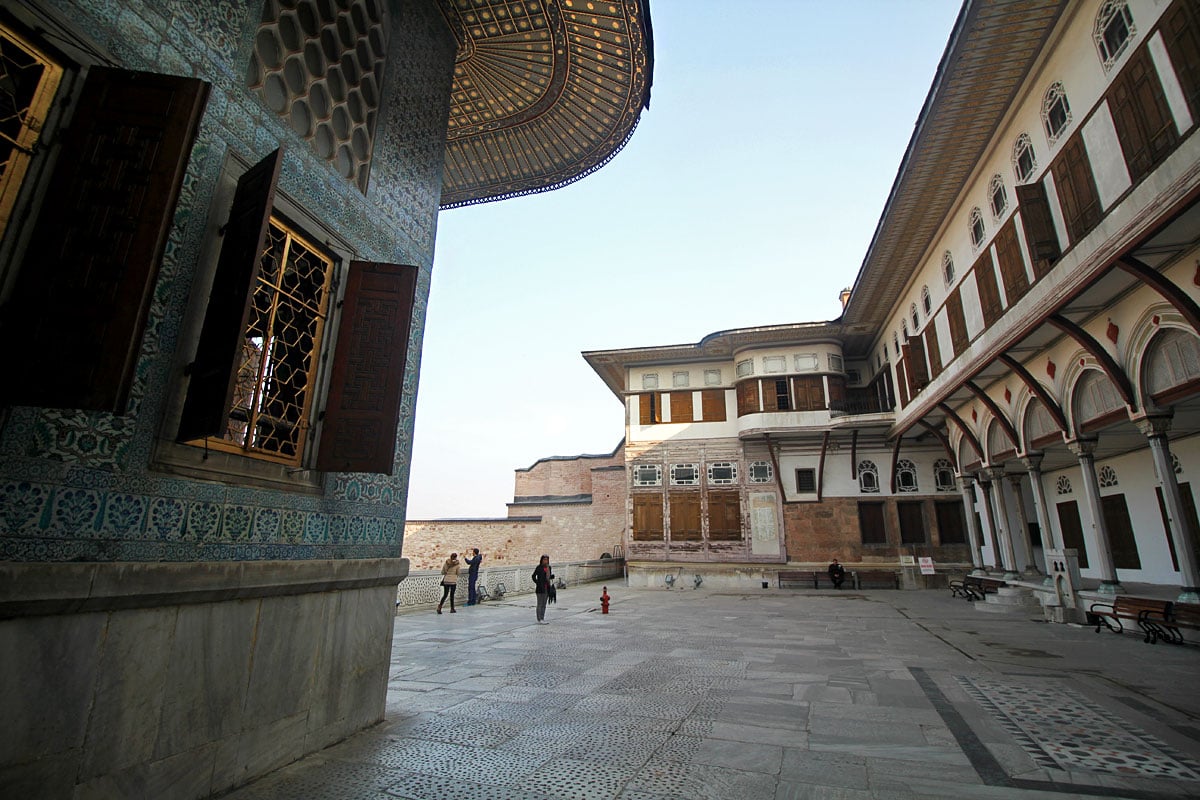 Fountain with pond just outside the Harem. I think the area behind the columns is the Arz Odası or “Audience Hall”. 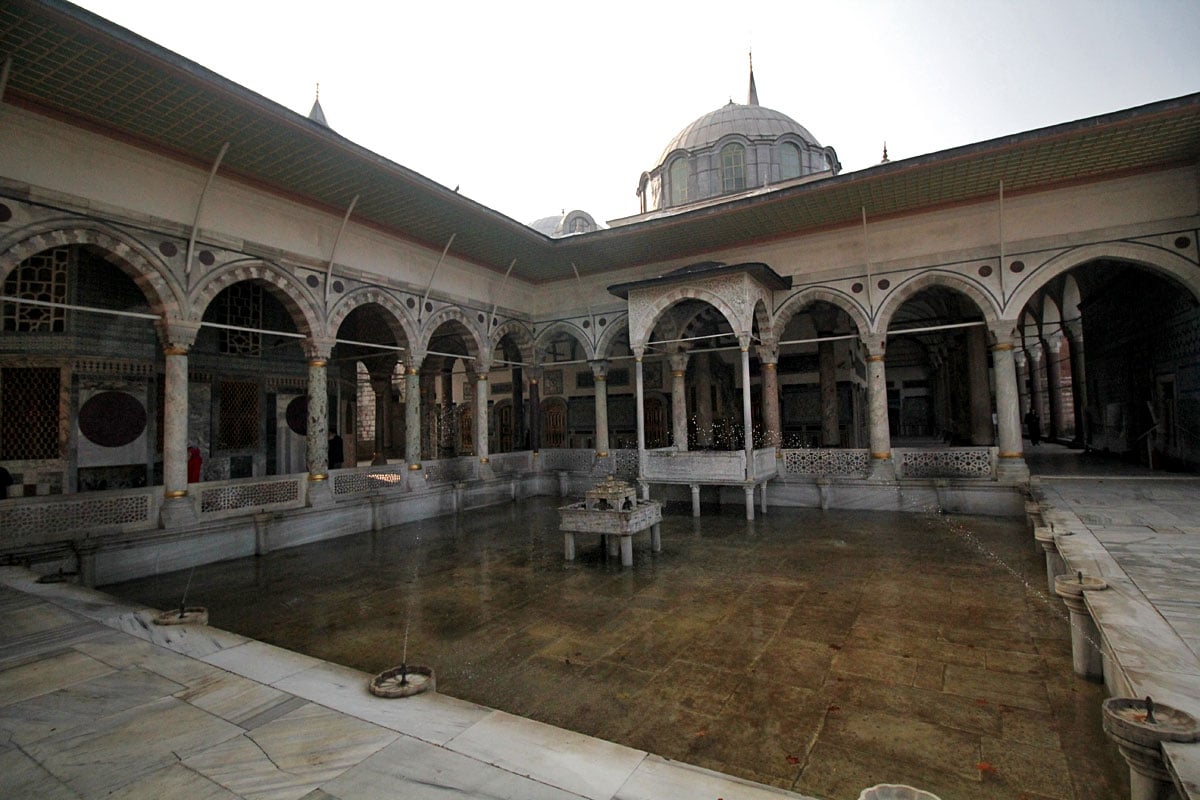 Built to commemorate the capture of Revan in Iran, the Revan Kiosk was also known as Sarık Odası or “Turban Room”. This was where all the Sultan’s turbans were kept. 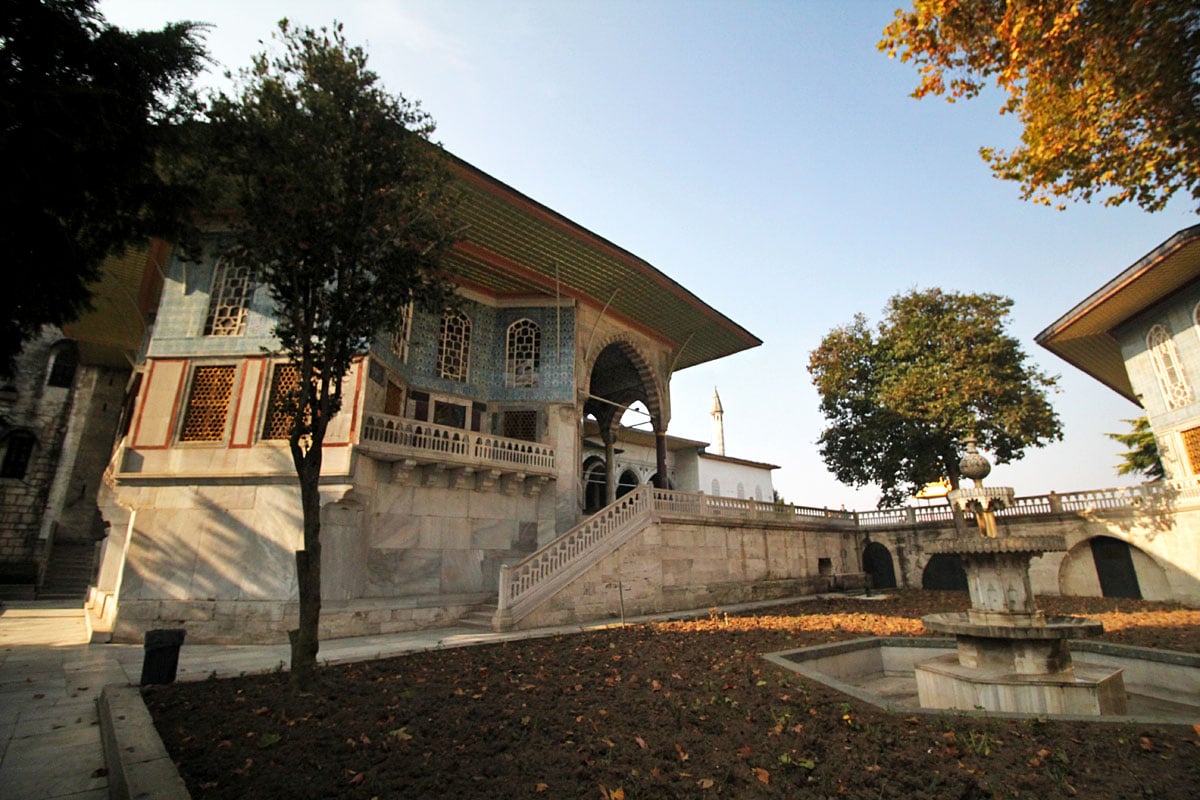 Splendid interior of the Sofa Kiosk. This was where the Sultan would watch sporting events performed by the Enderûn or “Interior Service” of the Imperial Court. 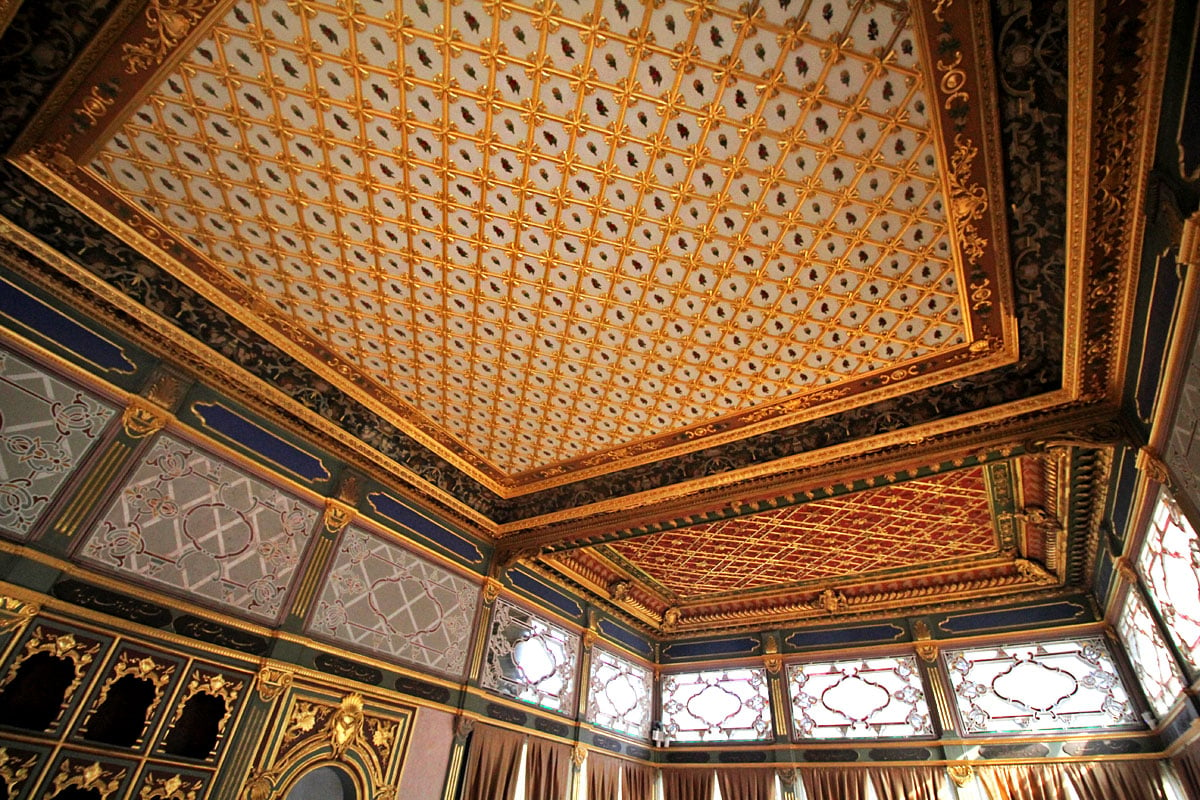 Not sure what these buildings were but they’re beautiful. Kind of like southern plantation homes. 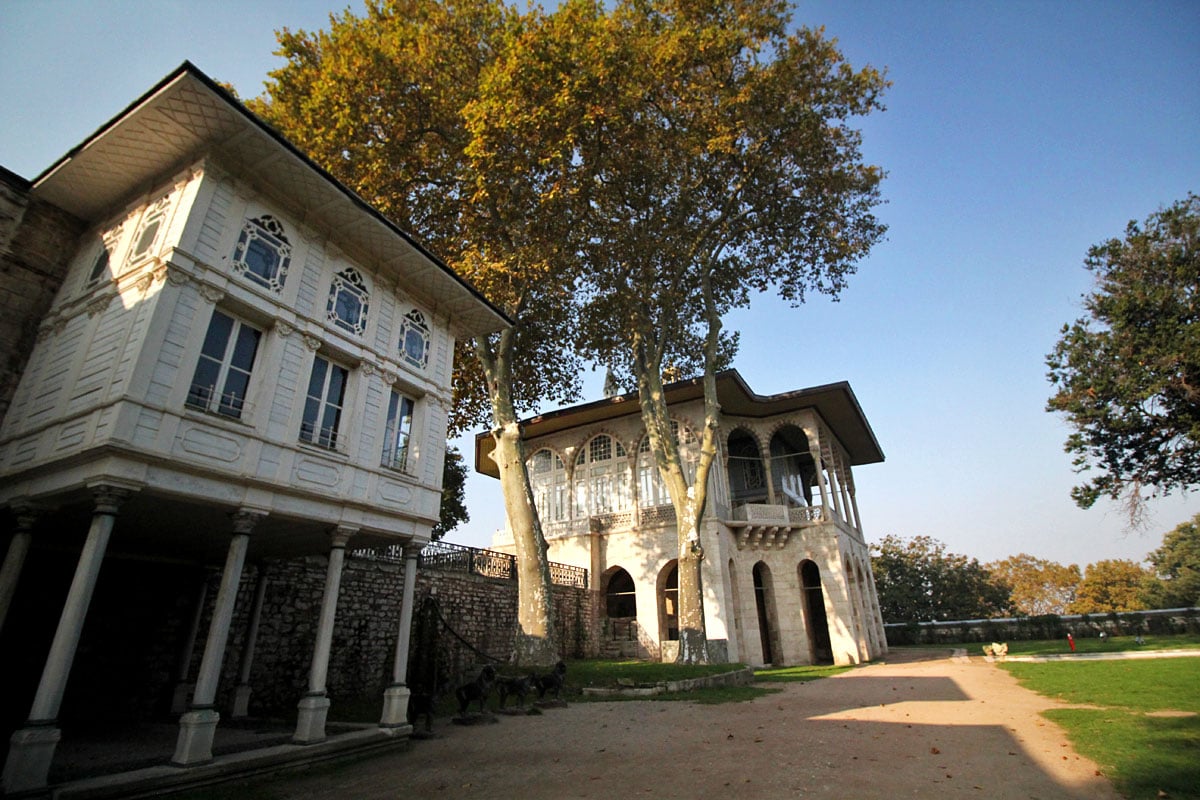 Check out the detail on the underside of this building’s roof. 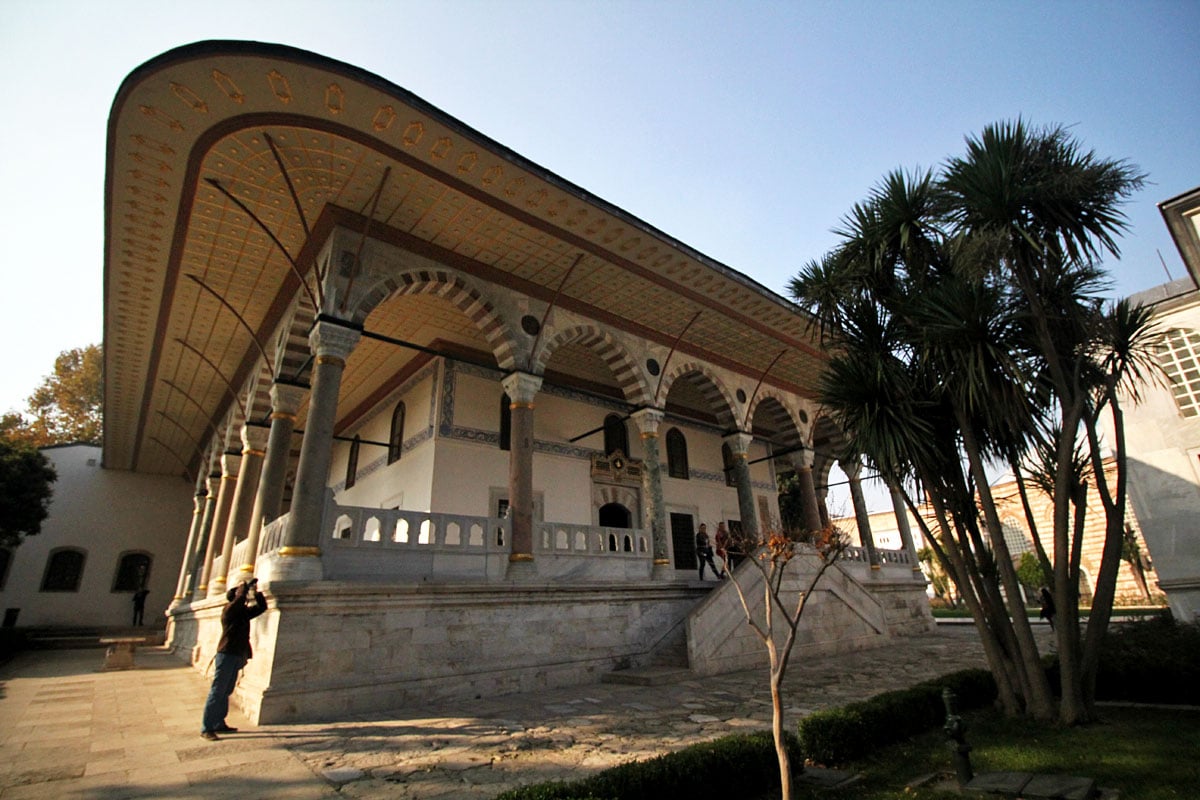 One of the last examples of classical palace architecture, Murat IV built this kiosk to commemorate his victory over Baghdad. 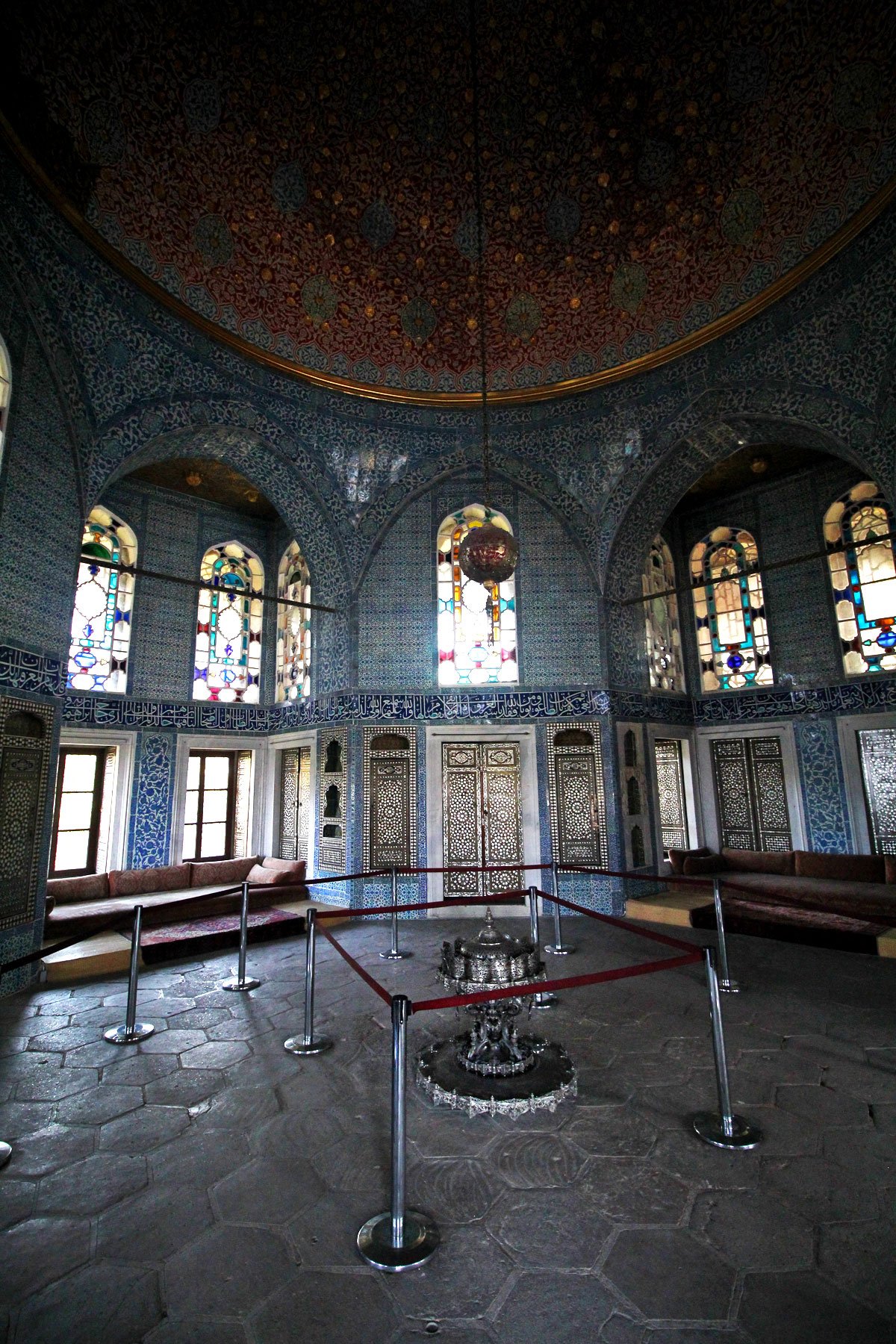 Inspired by European architecture, the Mecidiye Kiosk offers fantastic views of the Bosphorus. We were lucky to be here on a perfectly sunny day. You can’t see it in this picture but on the level below, accessible by stairs, is the Konyalı Restaurant. Based on what I’ve read online, the best thing on their menu is the view. 😆 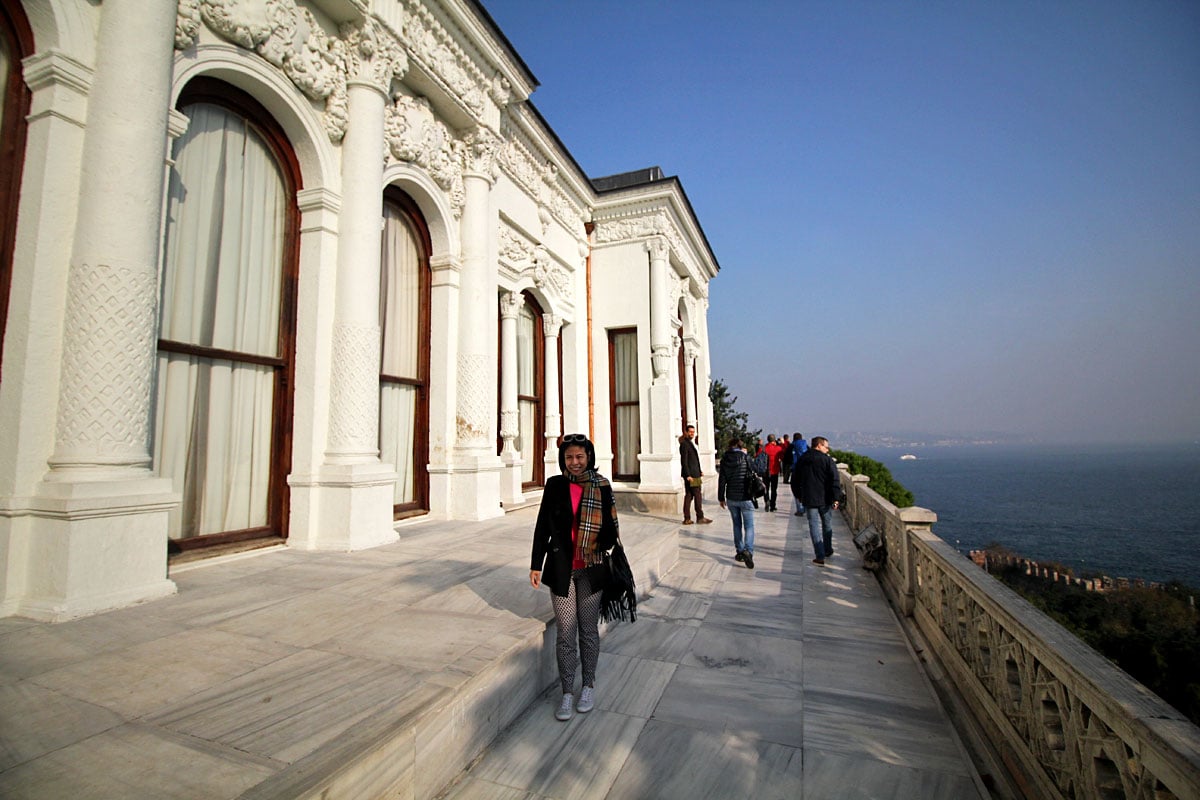 Please be advised that what’s pictured above is just a fraction of what you’ll find at Topkapi Palace. We didn’t have an entire day to spend here so we focused on the Harem and a few adjacent sections.

Conspicuously absent from this post are pictures of the Treasury. They don’t allow pictures inside and understandably so. It contains a jaw-dropping collection of objects decorated with precious metals and stones like gold, silver, rubies, emeralds, jade, pearls, and diamonds. Particularly awesome for me was a golden cradle studded with diamonds and gems, and the Kasıkçı (Spoonmaker’s) Diamond — a teardrop-shaped 86-carat rock surrounded by dozens of smaller stones. It was as big as a baby’s fist. 😯

HOW TO GET THERE:
The Imperial Gate to Topkapi Palace is just a stone’s throw away from Ayasofya.

0shares
A Mosque, a Museum, and a Cistern in Sultanahmet Square in Istanbul, Turkey
← Previous
Take a Whirlwind Tour of Sultanahmet's Top Tourist Attractions in a Day
Next →
Click here to cancel reply.