Sultanahmet is the heart of historic Istanbul and home to many of its top tourist sites. Some of its more labyrinthine attractions — like Topkapi Palace and the Archaeology Museums — can easily take up several hours of your time. Unfortunately, not all travelers have that luxury. With so many important sites to visit here, it can be hard to squeeze everything in with a limited amount of time. By focusing on the highlights, this guide aims to help you do just that.

Included in this guide are seven of Sultanahmet’s top tourist attractions as well as restaurant suggestions for lunch and dinner. It’s important that you follow this DIY tour any day from Wednesday to Sunday only. Topkapi Palace is closed on Tuesdays while Ayasofya, the Archaeology Museums, and Ibrahim Pasa Palace are closed on Mondays.

Here’s an area map indicating where all the attractions and restaurants are in relation to one another. The two attractions that are farthest from each other — Topkapi Palace and the Blue Mosque — are only about 15 minutes apart on foot. Click on the map to enlarge. 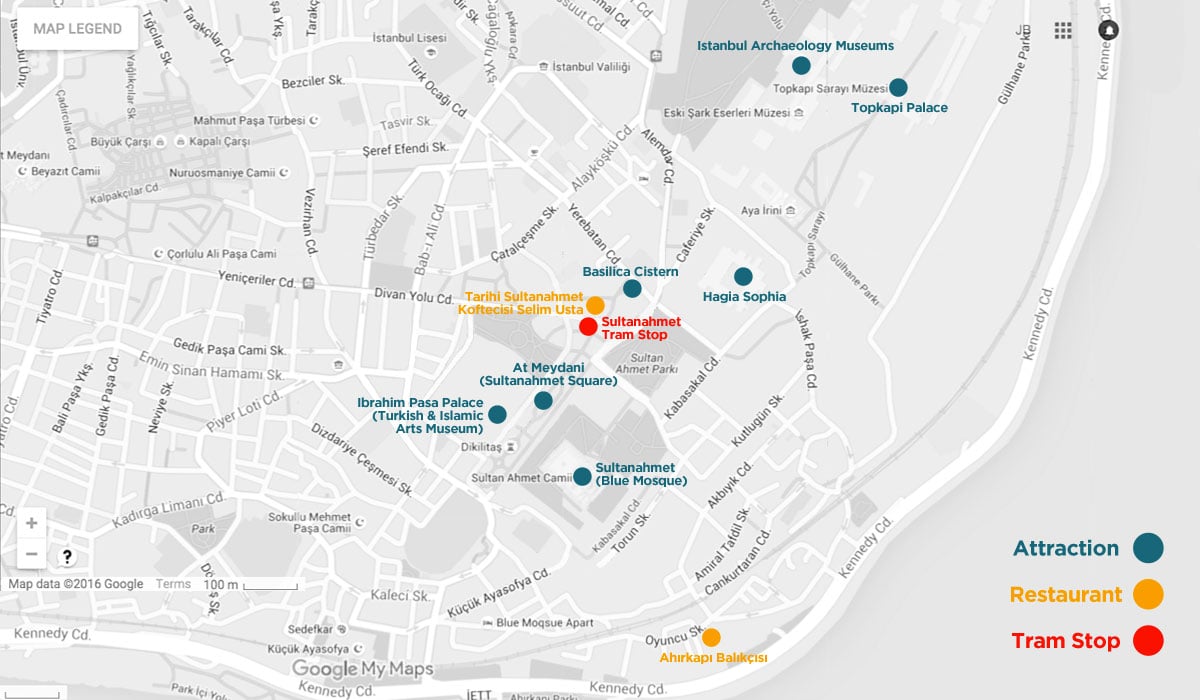 To save time and money, it’s highly recommended that you invest in the 5-day Istanbul Museum Pass. For 700TL, it gives you access to most of the sites* mentioned here along with a few others within 120 hours after its first use.  Admission to Topkapi Palace alone amounts to 500TL.

Available at the ticketing office of any participating museum, it also saves you a lot of time since you won’t have to line up to buy tickets at every site. These museums are popular so lines can get pretty long. 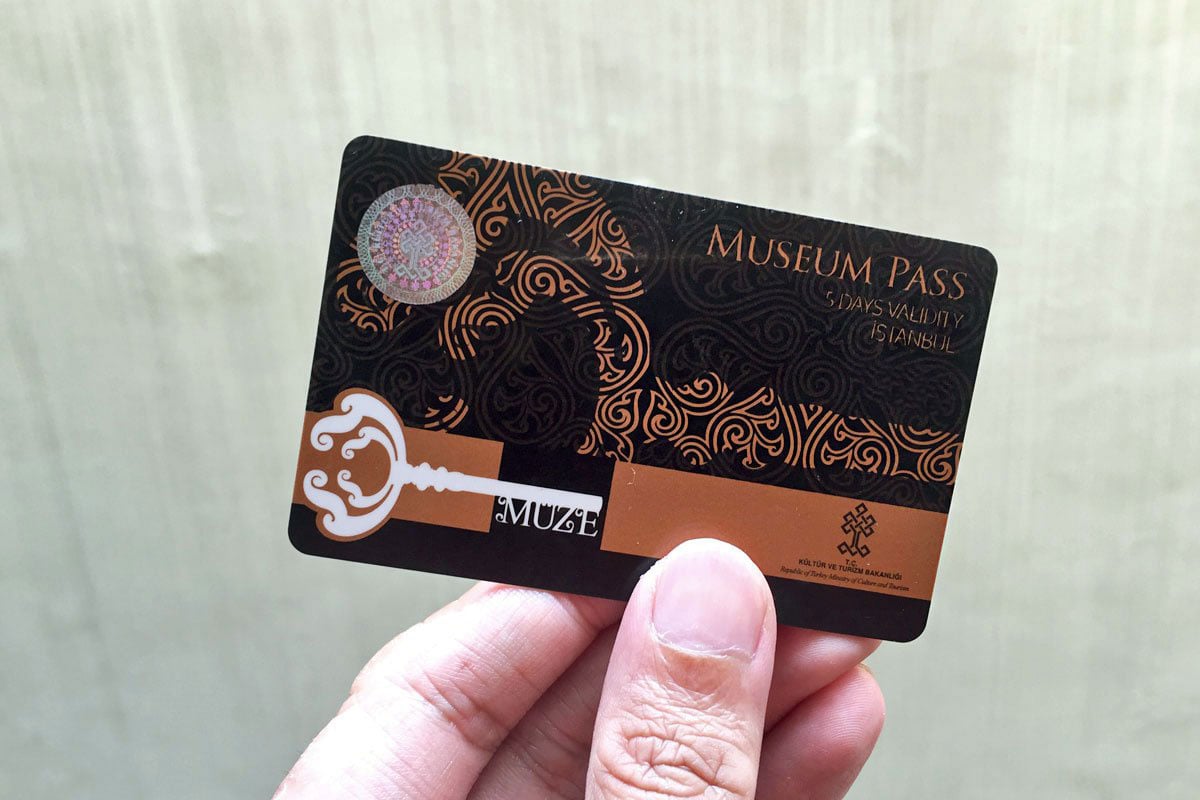 *Entrance to the Basilica Cistern is not included.

BACKGROUND: The court of the Ottoman Empire from the 15th to the 19th centuries, Topkapi Palace is the second most visited tourist destination in Istanbul, behind only Ayasofya. It’s comprised of four sprawling courtyards and a lavish Harem spread out over an area covering 700,000 sq m (7.5 million sq ft). There’s much to explore here but the highlights for me are the Harem and the Treasury.

TIP: You can stay an entire afternoon at the Palace but to visit all seven attractions in this guide, try not to spend more than two hours here. Be sure to arrive at 9AM when it opens and go straight to the Harem. This is precisely why I started this guide with Topkapi Palace. Unlike the other sites in this guide, they only allow a certain number of people in the Harem at a time so it’s best to arrive early to beat the crowds. Afterwards, make your way to the Treasury to see a jaw-dropping exhibit of objects decorated with precious metals and stones, including the 86 carat Kasıkçı (Spoonmaker’s) Diamond.

Check out my post on Topkapi Palace in Istanbul for more pictures and information. 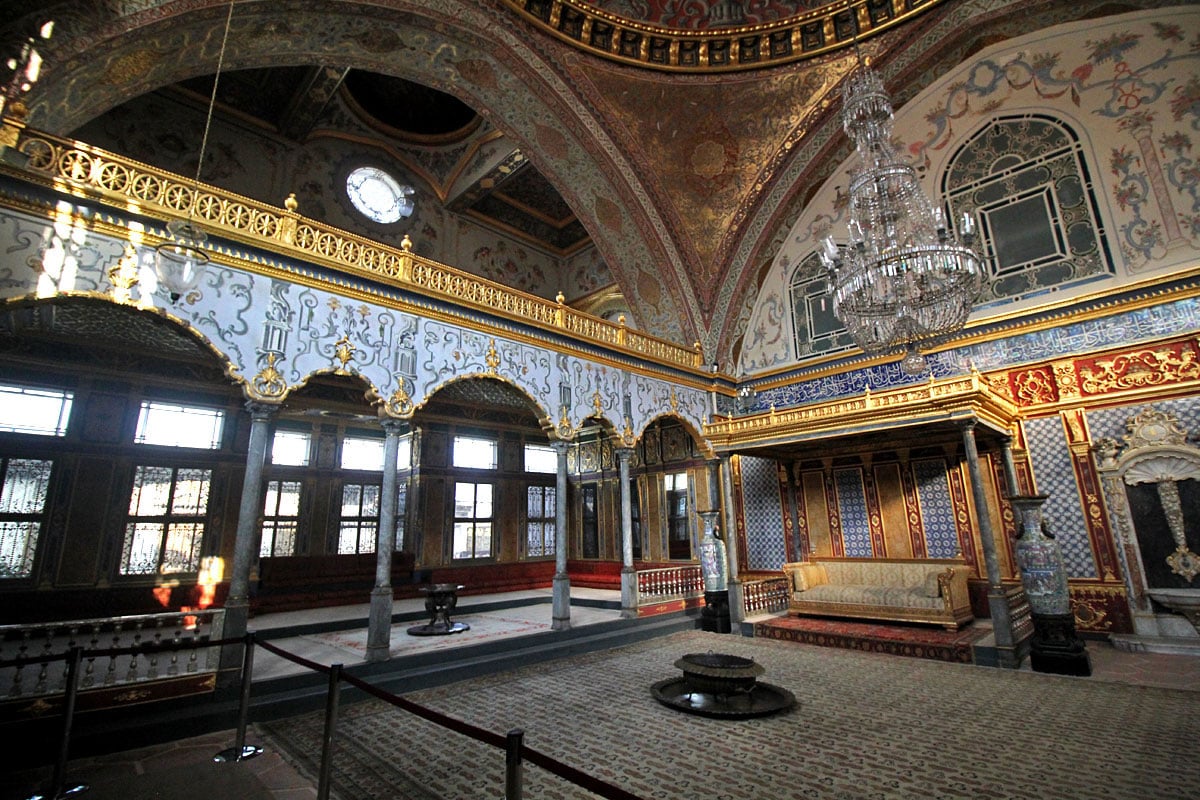 BACKGROUND: The Istanbul Archaeology Museums is comprised of three museums. The Museum of the Ancient Orient houses a collection of pre-Islamic items collected by the Ottoman Empire. The Tiled Pavilion is home to the Museum of Islamic Art and showcases Seljuk, Anatolian, and Ottoman tiles and ceramics. And the Archaeological Museum, the biggest of the three, houses a large collection of classical statues, sarcophagi, and artifacts from different periods and regions.

TIP: Like Topkapi Palace, there’s much to see here so you can spend a whole day perusing its exhibits if you wish. For the purpose of this guide, try not to spend more than 1-2 hours here. The highlights for me are the well-preserved sarcophagi in the Archaeological Museum. They’re spectacular so I suggest starting there.

Check out my post on the Istanbul Archaeology Museums for more pictures and information. 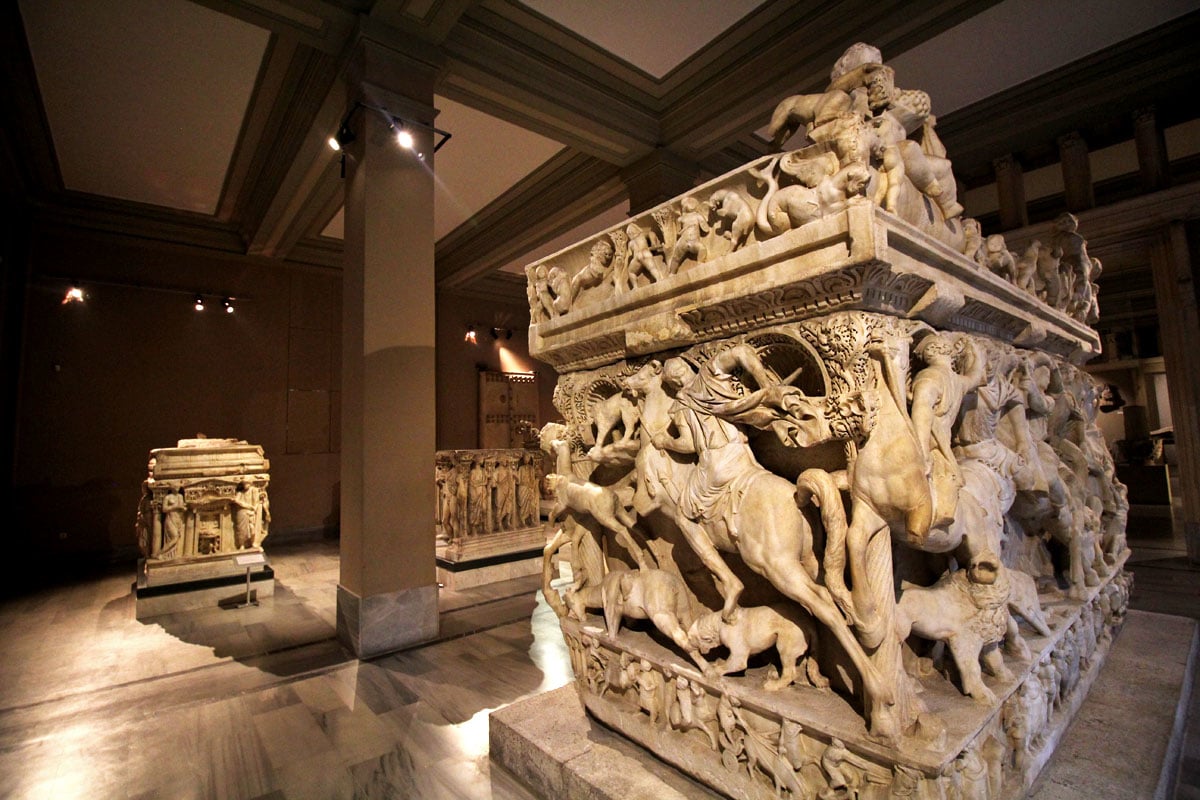 I’m guessing you’ll be pretty hungry after spending about four hours at Topkapi Palace and the Archaeology Museums. There are plenty of restaurants in Sultanahmet. Most are touristy but this one’s an exception. Located right by the Sultanahmet tram stop, Tarihi Sultanahmet Koftecisi Selim Usta is said to serve some of the best kofte (meatballs) in Istanbul. It’s a TripAdvisor Certificate of Excellence awardee with a solid 4.5 star rating.

TIP: Order their specialty which is the izgara köfte or grilled beef meatballs. Please be advised that there are a few restaurants around it with similar names so be sure to look for the one that has the words “Selim Usta” in its name. You’ll see it on the brown wooden sign above its red awning.

BACKGROUND: Built in 532 AD, the Basilica Cistern is the largest surviving Byzantine cistern in Istanbul. It contains 336 marble columns each around 9 meters (30 ft) high, and can hold up to 80,000 cubic meters (2,800,000 cu ft) of water sourced from a reservoir near the Black Sea. It’s the sight of many famous scenes in movies and books like Dan Brown’s Inferno and the James Bond film From Russia with Love.

TIP: Entrance to the cistern is 190TL and not included in the 5-day Istanbul Museum Pass. I’m not sure how much, but taking pictures with a tripod or monopod inside the cistern is subject to a fee.

Check out my post on the Basilica Cistern in Istanbul for more pictures and information.

BACKGROUND: The most visited and iconic site in Istanbul, Ayasofya was once considered the greatest church in Christendom. It was the largest church ever built until St Peter’s Basilica was constructed a thousand years later in Rome. It was eventually converted into a mosque before being declared a museum in 1935.

TIP: Be sure to go upstairs to the mezzanine level to see the Byzantine mosaics. You can get the best pictures from one of its many balconies as well.

Check out my post on Ayasofya (Hagia Sophia) in Istanbul for more pictures and information.

BACKGROUND: The name “Sultanahmet Square” refers to a park that was once the Hippodrome of Constantinople. It was a race track in its heyday that served as the sporting and social center of the city.

TIP: There are only four remaining fragments from the original structure so there isn’t much to see here. No need to spend more than a few minutes to take pictures before proceeding to the next stop.

Check out my post on At Meydani (Sultanahmet Square) in Istanbul for more pictures and information.

BACKGROUND: Ibrahim Pasa Palace houses the Turkish and Islamic Arts Museum which is said to contain an impressive collection of calligraphy and rugs.

TIP: This was the only place on this list that we didn’t go to. I added it because it’s located directly across from the Blue Mosque and admission is included in the 5-day Istanbul Museum Pass. If you follow the suggested times on this guide, then you should get here by 5PM which is right around prayer time at the mosque. Based on its favorable TripAdvisor reviews, this is a good place to spend an hour or so to wait for prayers to end before proceeding to Sultanahmet.

Check out my post on Ibrahim Pasa Palace (Turkish and Islamic Arts Museum) in Istanbul for more pictures and information.

BACKGROUND: Sultanahmet for me was the most striking mosque we visited in Turkey. It’s an imposing sight with its many voluptuous domes and six minarets. Just as impressive inside, it gets its popular name from the tens of thousands of blue Iznik tiles that cover its interior.

TIP: Sultanhamet is a functioning mosque so it will be closed during prayer times. Be sure to observe proper mosque etiquette when visiting. It’s improper to show too much skin so shorts and sleeveless shirts are prohibited. Women are provided scarves to cover their heads and everyone will be asked to remove their shoes before entering the mosque.

Check out my post on the Sultanahmet (Blue Mosque) for more pictures and information.

I’m guessing you’ll be pretty tired by now after 8-9 hours of walking. If you’ve been following the suggested times on this guide, then it’ll be around 7PM at this point so you’ll probably be famished as well. Surrounded by water, Istanbul is known for its seafood so what better way to cap off a day of sightseeing than with fresh seafood? Like the meatball restaurant, Ahırkapı Balıkçısı is highly regarded and boasts a solid rating on TripAdvisor.

TIP: They serve the freshest seafood so order whatever’s in season. Prices may seem high at first but portions are usually good for two, sometimes up to four depending on the fish. The restaurant is a little out of the way so click on the link below and scroll to the bottom for directions on how to get there. Be warned that an alleged copycat bearing a similar name has opened directly in front of it. The original has the word “orijinal” in its awning. Look closely at the name as well. The correct one only has one “h” in the first word — Ahırkapı Balıkçısı. The other one is named “Ahhir Kapi”, spelled with two “h”s. It also has the words “fish home” in its name. That’s not the one I’m suggesting. 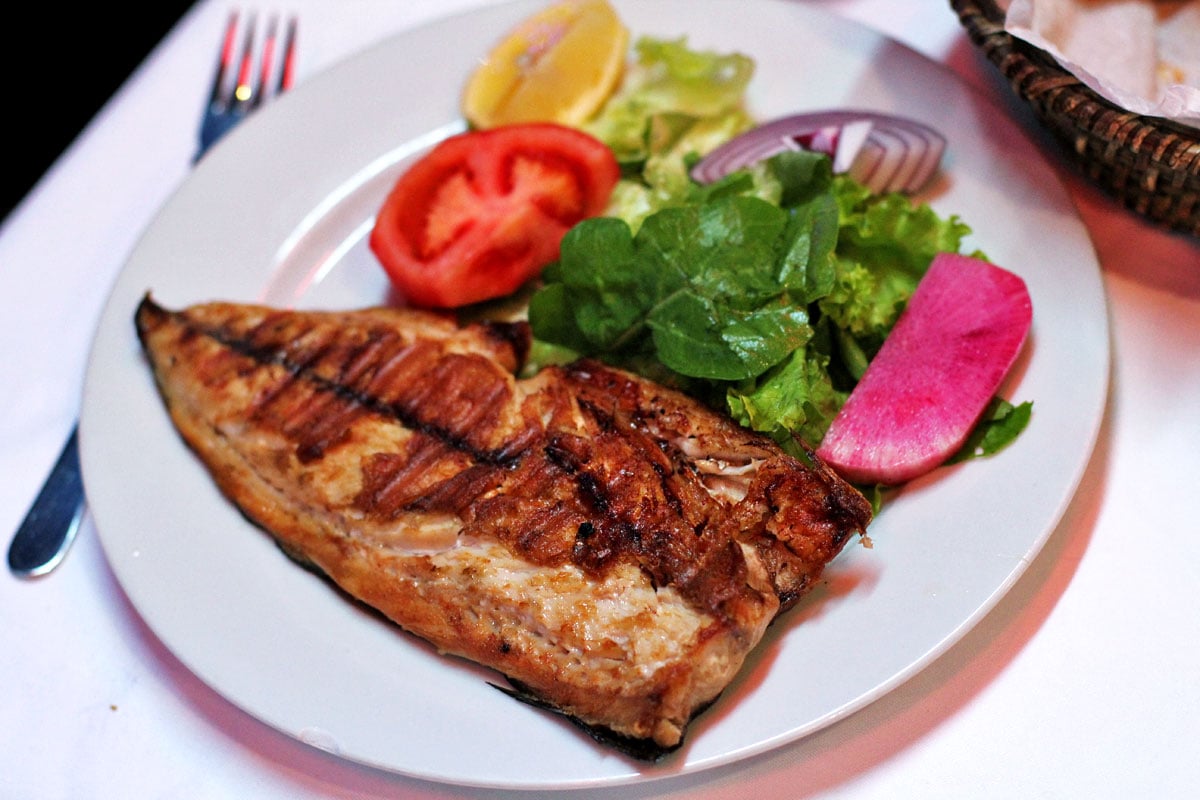 If you found this guide useful, then you may be interested in a DIY walking tour of Istanbul’s two most famous bazaars — the Grand and Egyptian Spice Bazaars. It starts at Sultanahmet Square and makes a stop at Rüstem Pasha Mosque which is a small but beautiful mosque just minutes from the Spice Bazaar. It’s a leisurely walk that takes about half a day, maybe more if you’re a big shopper. 😉

Loving your entries! Going there in a month so definitely cannot wait. It helps to get a Pinoy's perspective, too!

Thanks Karyl! Have an awesome time in Turkey! Love that country. :)