EDITOR’S NOTE: Traveleater Emily Henry shares with us twelve traditional dishes to try on your next visit to Ireland.

When reflecting on the most delicious and recognized cuisines from around the globe, Ireland is rarely, if ever, mentioned.

Ireland, of course, is most known for its majestically rugged landscape, fetching folk music, and mouth watering ales. But there is a world of delightful dishes that are part of the history and traditions of the Emerald Isle. Irish food is hearty and comforting, with a familiarity and humbleness to it that makes many dishes both charming and irresistibly delicious!

If you ever find yourself traversing through this breathlessly beautiful country, here are just twelve of the traditional Irish foods you will want to make certain you try before you leave!

If you’re planning a trip to Ireland and want to really dig into the cuisine, then you may be interested in joining a food tour.

No time to read this Irish food guide now? Click on the save button and pin it for later! 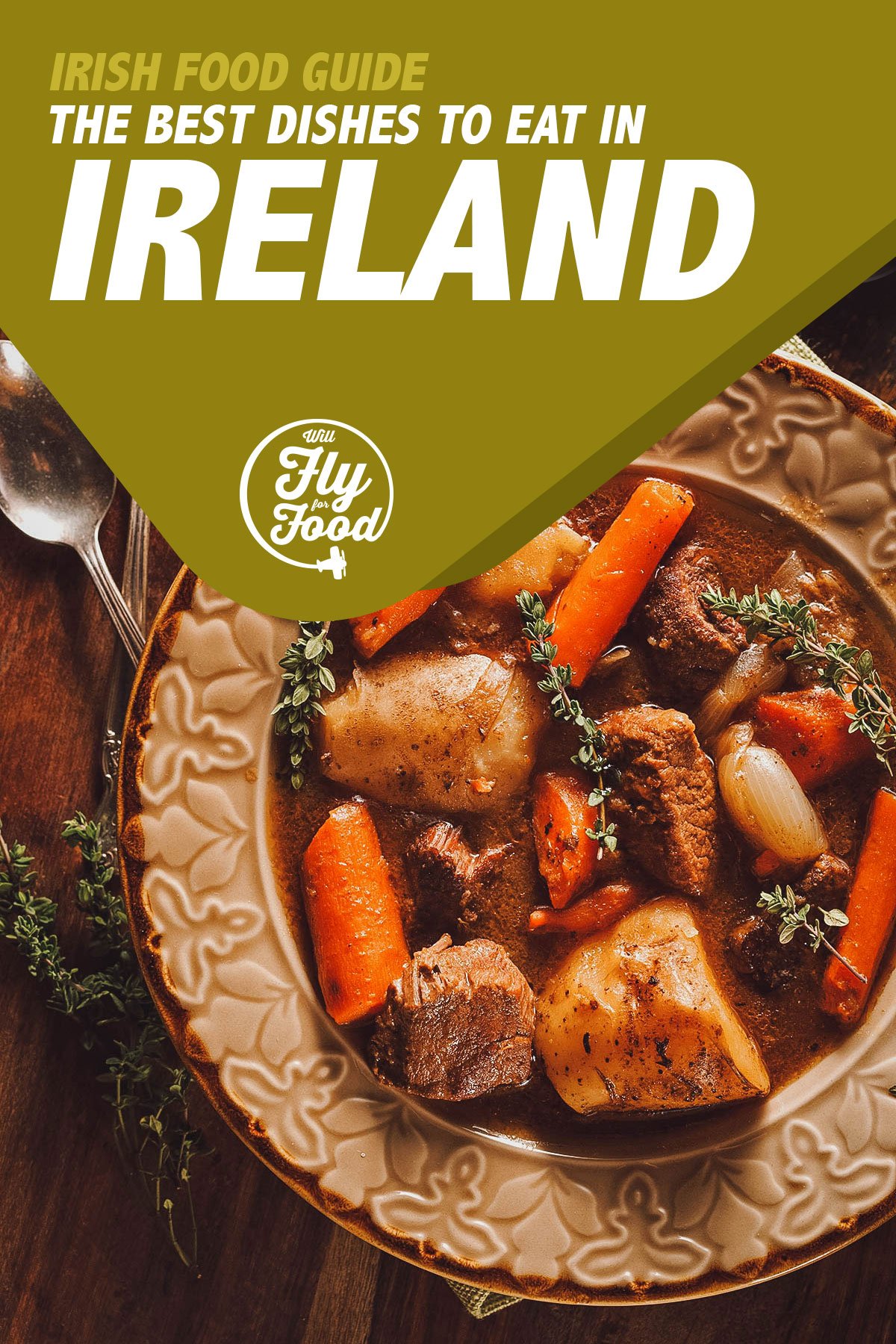 WHAT IS TRADITIONAL IRISH FOOD?

Traditional Irish food is simple but hearty. Ireland is home to an abundance of locally grown produce and fresh fish and seafood caught from the surrounding waters of the Atlantic Ocean.

Bread and potatoes form an important part of the Irish diet. Bread usually accompanies the main meal while potatoes have been an important part of Irish cuisine since the 18th century. It can be prepared in a number of ways and continues to feature prominently in many traditional Irish recipes.

Ireland is not rich in fruit but it does have a thriving meat and dairy industry. Its temperate climate allows pastures to grow grass for about ten months a year making it an ideal place to raise cattle, sheep, and pigs.

Meat and potatoes are likely the two foods that come to mind when thinking of Ireland. And, nothing reflects the warmth and homegrown comfort like a good old hearty Irish stew.

Made with what most Irish would find in their pantry or growing in their garden all tossed into one single pot, Irish beef stew is a simple yet satisfying meal that’ll fill the belly and warm the soul. It’s one of those foods that can bring you back to another place and time with each spoonful.

With a base of root vegetables and beef, it’s the perfect dish to make in the dead of winter or on a cold and rainy spring day.

The number of variations on the recipe for Irish soda bread will likely match the number of families in Ireland. Starting off with the base recipe, added twists and ingredients have resulted in an endless variety of breads that vary from family to family and even between generations.

And, even though it’s bread, there’s no yeast in the recipe, and most recipes will traditionally call for golden raisins and dried cranberries. Other variations can include dashes of honey, sugar, bran, and even Guinness, just to name a few.

A mainstay on the Irish dinner table, you’ll find Irish soda bread best served straight out of the oven or day-old toasted with butter.

Potatoes once again take center stage, this time in their creamy mashed rendition alongside cabbage and spring onions. It’s a classic comfort food – creamy, buttery and plentiful. And, adding bacon to this traditional Irish dish only elevates it to the level of unavoidably irresistible.

How is this dish even better than your run of the mill mashed potato? How about a generous dollop of butter sat right in the middle, slowly melting its way down. Much like Irish Soda Bread, every family seems to have their own rendition of this Irish classic.

Perhaps one of the most well known Irish dishes, Shepherd’s Pie is typically made with a layer of ground beef or lamb with vegetables and topped with creamy whipped mashed potatoes, then baked and browned to perfection.

It’s a hearty meal that originated in Scotland as a proper pie, complete with crust rather than potatoes. Once it landed in Ireland, however, they swapped out the pastry for potatoes that are inexpensive and plentiful throughout the country. And, to this day shepherd’s pie is most commonly recognized as being made with mashed potatoes and not pie crust.

It has also become a quite popular way of using up leftovers, as there is really no limit to what vegetables and meats can be combined to prepare the base.

Once again potatoes make their stand, in yet another delicious rendition.

An amalgamation of raw grated potatoes and mashed potatoes, Boxty is a resourceful way of combining the potatoes already cooked with the potatoes waiting to be cooked. Mix both together into a patty, fry them up and top the potato pancake with a dollop of sour cream and a generous sprinkling of spring onions.

Traditionally, boxty is paired with bacon and fried eggs, but they can hold their own just fine when presented as a solo offering. Served for breakfast, lunch, dinner or anything in between; there’s never a wrong time of day to enjoy this Irish potato pancake!

Barmbrack, commonly shortened to “brack”, is most often associated with Halloween but can be enjoyed any time throughout the year.

At Halloween, however, it’s baked with a little extra surprise in the form of trinkets and coins mixed into the dough. Be lucky enough to grab a slice with a coin, and you’re destined to find wealth in the year ahead; Find a ring, and you can start planning to walk down the aisle.

Made with juicy raisins or dried fruits, this sweet loaf is made even more delicious when it’s soaked in tea and whiskey. Enjoy a thick slice of this fortunetelling fruitcake with an afternoon tea.

Admittedly, this dish sounds painfully bland and boring, however it’s one of the most popular favorites across the land.

The boiled bacon in this dish isn’t what most people on this side of the pond would recognize as bacon. Salted pork shoulder is the base of the dish, boiled with onions, carrots and herbs and finished off with cabbage for the last ten minutes of boiling.

Finished off with a delicate and creamy parsley sauce, it’s an unexpectedly delicious and traditionally Irish meal – and one that isn’t centered around potatoes and doesn’t even need to see a potato touch the plate.

Cured or smoked salmon is the most popular way to enjoy this protein throughout Ireland. And, it can be found in any meal of the day, be it breakfast, lunch or dinner.

Pair it with scrambled eggs in the morning, atop a salad for lunch or with boxty for dinner. It’s also great just on its own! As the most common type of fish served up in Ireland, salmon is a staple in Irish kitchens.

Nope, don’t be deceived, this is not a dessert! But, it is a staple in Irish cuisine. This is actually a type of sausage that is given the name based on whether or not the sausage has been made with blood.

Black pudding – which actually has a purplish hue – is a type of blood sausage while it’s sidekick white pudding is simply made without the blood. Making its appearance more frequently than white pudding, black pudding is often served in a traditional Irish breakfast, both within Ireland and abroad.

Although potatoes are the most common root vegetable seen in Irish dishes, it doesn’t mean that other roots can’t make an appearance every now and again!

As a side dish, honey glazed carrots and parsnips go together with meat or fish and are quick, simple and such a yummy combination of sweet and savory. They add a bright pop of color to your plate and provide a healthy pairing alternative.

Like shepherd’s pie, the Dublin coddle is a traditional Irish stew that makes use of the week’s leftovers. It’s a working-class Irish dish that gets its name from the gentle simmering or “coddling” of ingredients in a one-pot stew.

There’s no set recipe for coddle though it typically contains rashers (Irish bacon) and pork sausage slowly simmered for hours with potatoes, onions, carrots, and herbs. Often served with soda bread or Irish brown bread to mop up the juices, it’s an inexpensive and filling meal that’s especially popular in winter.

Many people say that breakfast is the most important meal of the day. That sentiment clearly isn’t lost on the Irish with this hearty breakfast fit for a king!

Also known as an Irish fry or Ulster fry, a full Irish breakfast is a traditional cooked breakfast in Ireland that contains some or all of the following: rashers, black pudding, white pudding, pork sausages, baked beans, mushrooms, grilled tomatoes, fried eggs, and leftover potatoes. It’s similar to a full English breakfast and is usually served with tea, orange juice, toast, butter, and marmalade.

An absolute feast of a meal, the full Irish breakfast was created for farm workers to fill them up and get them ready for a full day’s work. It was comprised of locally sourced produce and ingredients, all of which were cooked together with butter in a frying pan.

Short of an Irish chef, no one knows traditional Irish food better than a local, so what better way to experience Irish cuisine than by going on a food tour? A food-obsessed Irish guide will take you to the city’s best restaurants and markets so all you have to do is follow and eat. Check out Get Your Guide for a list of Irish food tours in Dublin and other cities throughout Ireland.

Fill your plate with any of these irresistible dishes and your heart and soul will instantly be comforted and filled with warmth – and your belly will be filled with the heartiness of Irish tradition.

And, if you ever find yourself wandering across the Irish countryside, exploring the towns and taking in the sights, be sure to include trying at least a few of these traditional Irish foods as a part of your travel plans. It will add even more to your journey, and give you just another reason to fall in love with Ireland even more.

Emily Henry is a food and travel writer at Ukwritings.com and Academized.com. She also contributes her knowledge as a tutor at Undergraduate writing service UK.

Some of the links in this Irish food guide are affiliate links. If you make a booking or reservation, then we’ll earn a small commission at no added cost to you. As always, we only recommend products and services that we use ourselves and firmly believe in. We really appreciate your support as it helps us make more of these free travel and food guides. Thank you!