Honestly, I didn’t think we’d land. I hoped that we would, but based on what I had read online, there was a good chance that we couldn’t.

The waters around Nagasaki Harbor are known to be choppy, so much so that landing on Hashima Island is never guaranteed. Located 19 km from Nagasaki Port, it takes around half an hour to get there. The captain will circle the island a couple of times before making the decision on whether or not to land. It’s entirely his call so the possibility of you stepping foot on this UNESCO World Heritage Site rests solely on his shoulders. Based on TripAdvisor reviews, enough people are disappointed by his decision to make it a concern. From the sound of it, what may seem like sunny skies and calm waters isn’t good enough on some days, resulting in the captain turning his ship around and heading back to port.

They have no way of predicting the landing conditions until they get to the island, so paying the non-refundable fee to go on this tour is at your own risk. Thankfully, it paid off for me.

Several operators offer this tour but I went with Gunkanjima Concierge based on their reviews. As far as I know, all tours regardless of which company you book with are in Japanese only. Gunkanjima Concierge seems to be the only one that provides English audioguides, which is another reason why I booked with them. They have two departures – at 9:50AM and 1PM daily – both of which leave from Tokiwa Terminal. 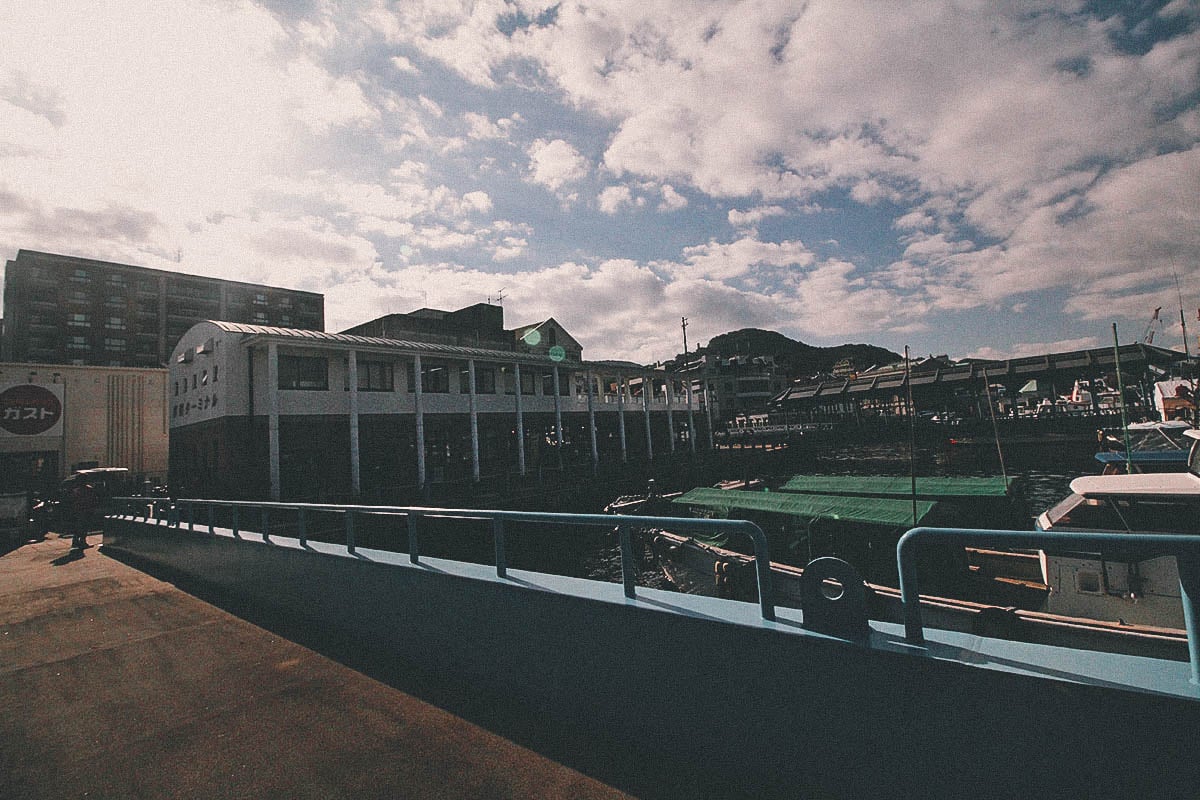 There’s our ship – the Mercury – which can accommodate up to 130 people. It almost always gets full, like it did today, so it’s recommended that you book your slot weeks in advance. I paid JPY 4,000 for the cruise and an additional JPY 300 to land on the island.

From what I understand, they’ll give you a full/partial refund or replacement tour if the weather is bad enough for them to cancel the tour outright. But if you go to the island and the captain decides it’s not safe enough to land, then you’re not entitled to a refund. The literature on this is vague so you may want to confirm before booking. One disgruntled TripAdvisor reviewer complained how they were only given free entrance to the Gunkanjima Museum in lieu of not being able to land, which is a pretty poor tradeoff. As previously described, there is some risk involved when you go on this tour. 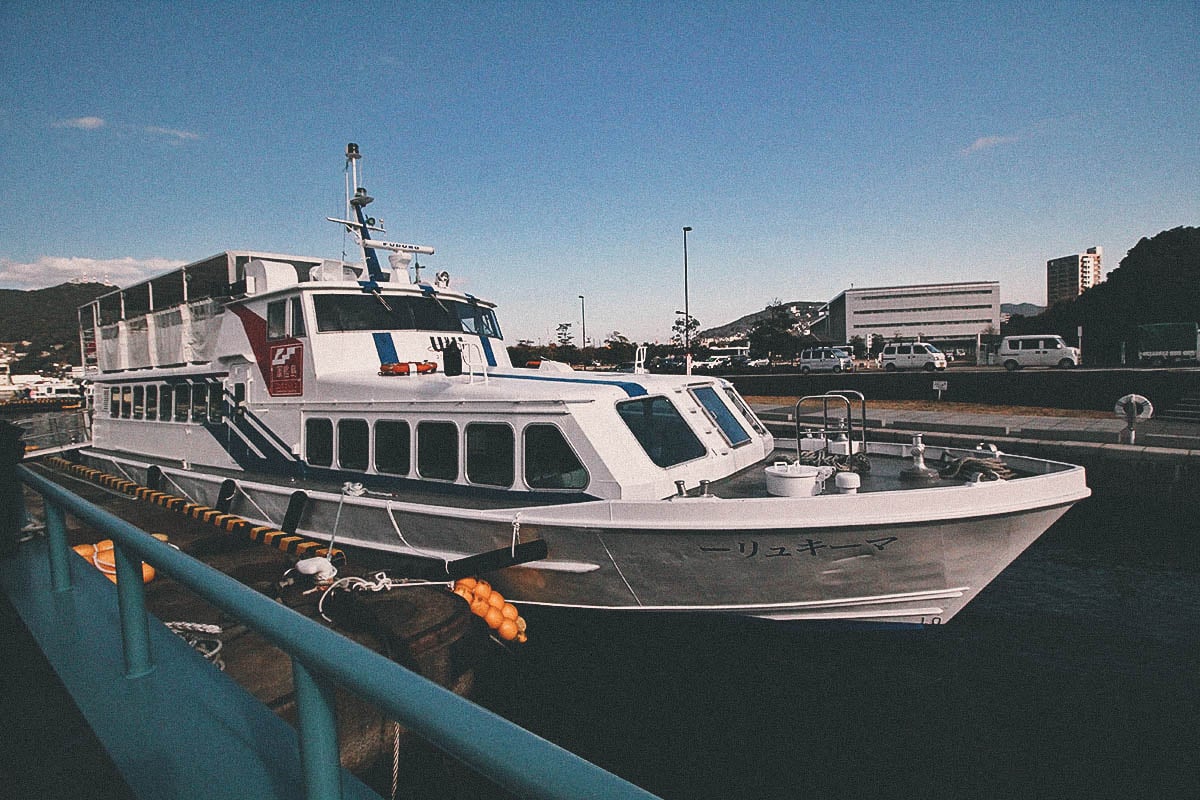 Soon as we were allowed to board, I made a beeline for the top deck to get unobstructed views of the island. My English audioguide was useless from up here though. Reception is best in the main cabin so if you want clear audio, then it’s best to sit downstairs. English audio guides are free but they’re available on a first-come, first-served basis. 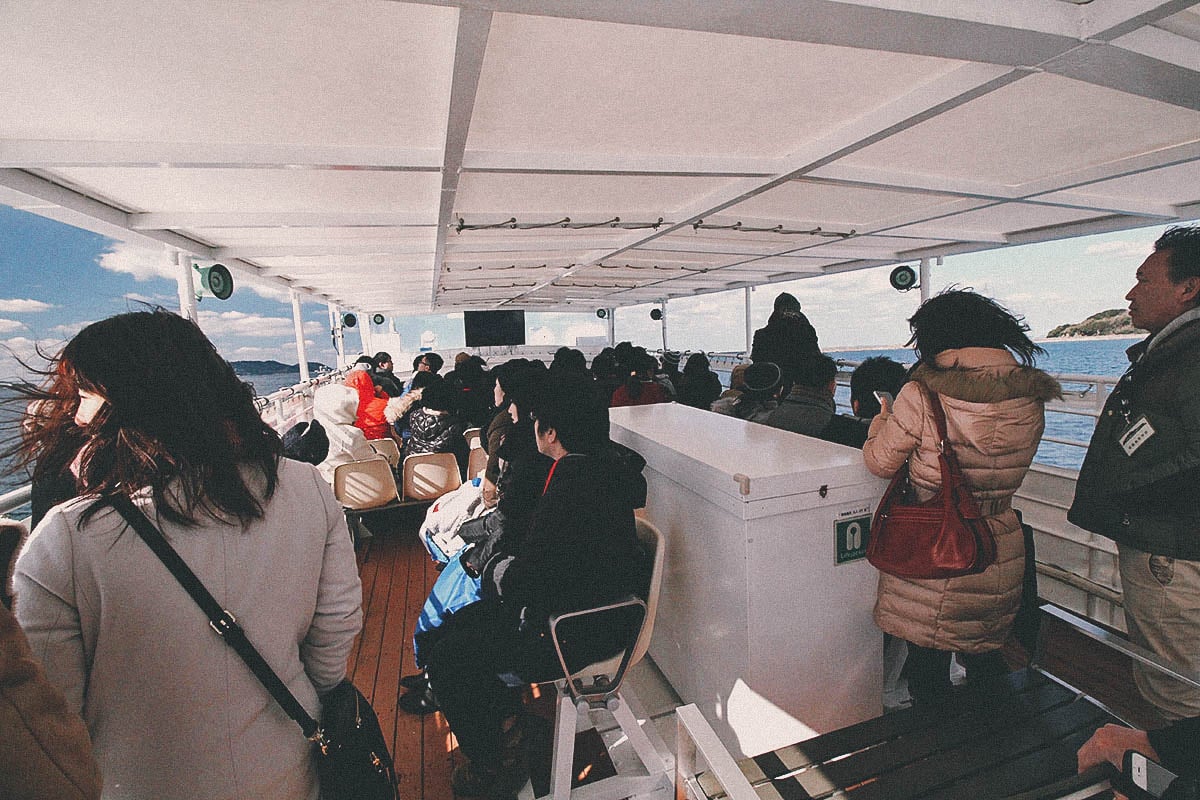 And away we go! They weren’t kidding when they said Nagasaki’s waters are treacherous. The ship rocked back and forth pretty hard at times, especially when close to the island. If you’re prone to seasickness, then this tour may not be for you. 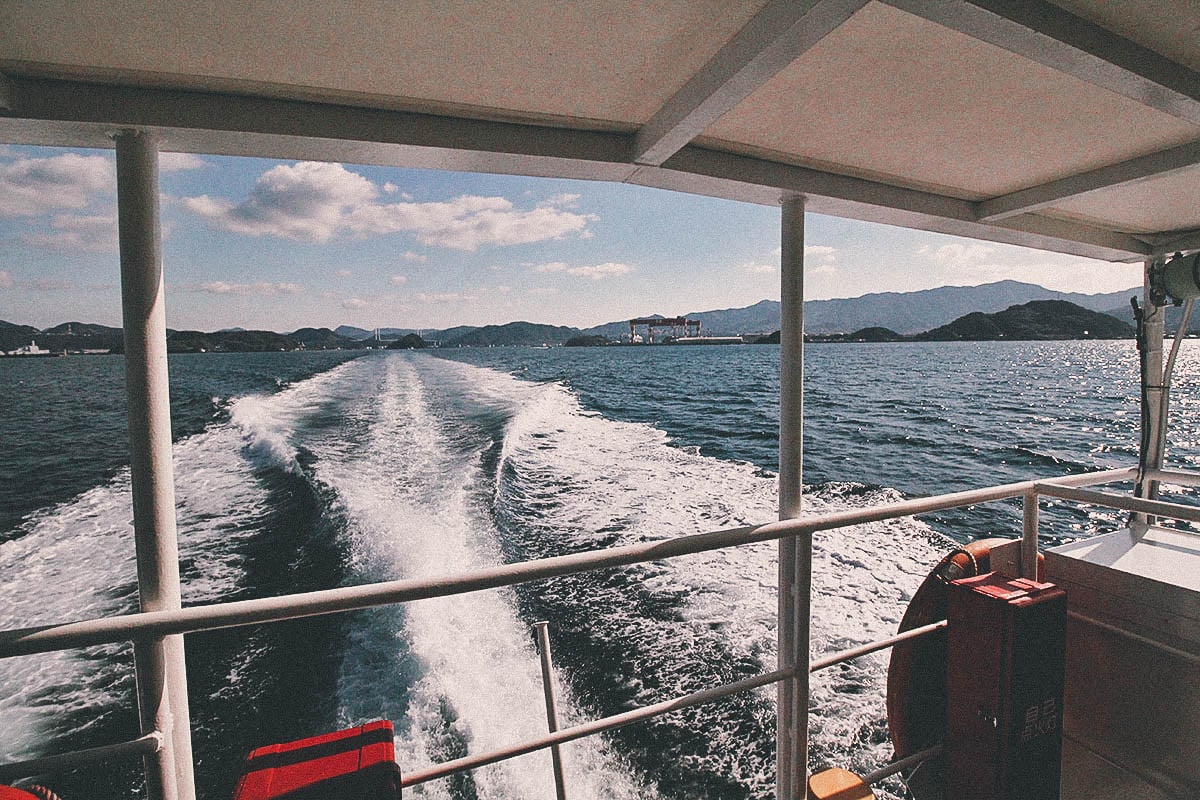 Our first glimpse of the island. It’s the one on the left. 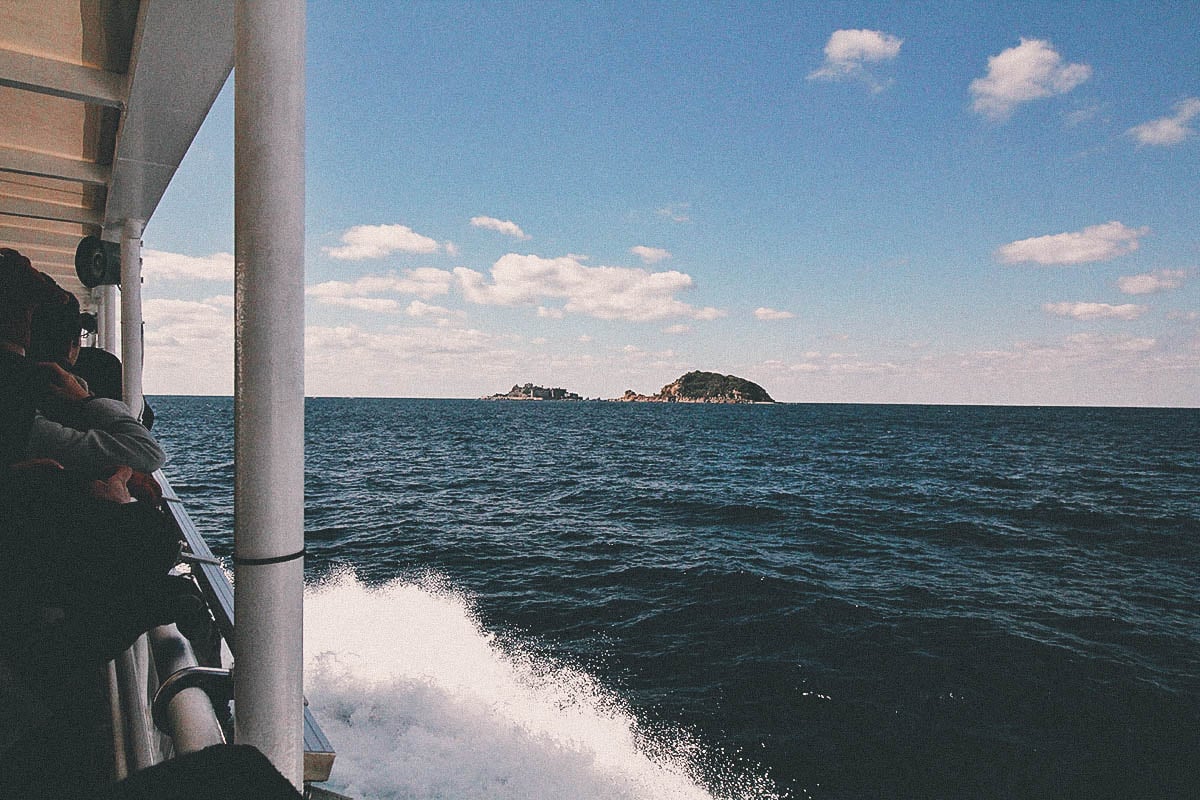 The former settlement is commonly referred to as Gunkanjima or “battleship island” because of its shape, but its real name is Hashima Island. It was inscribed as a UNESCO World Heritage site in July 2015. 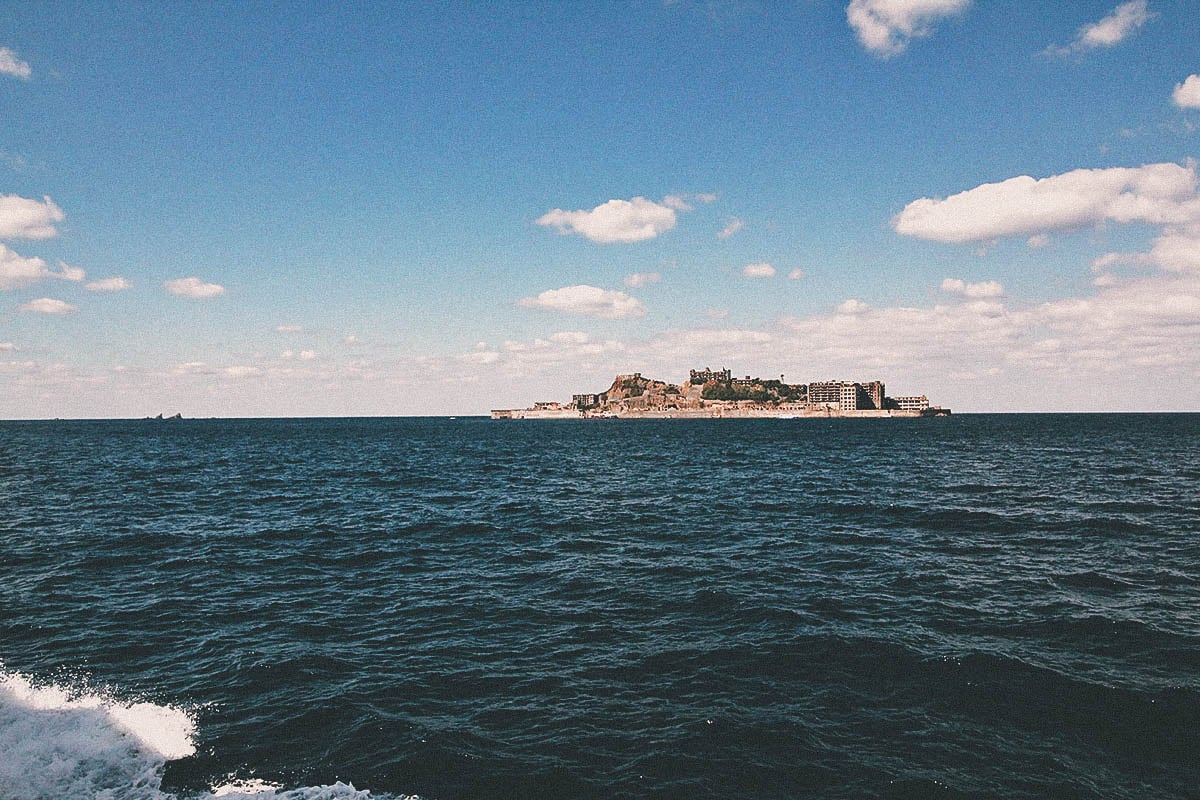 Moving closer to the island, I was getting pretty excited at tis point but I still wasn’t sure we could land. The waters did seem fairly choppy so I just kept my fingers crossed. 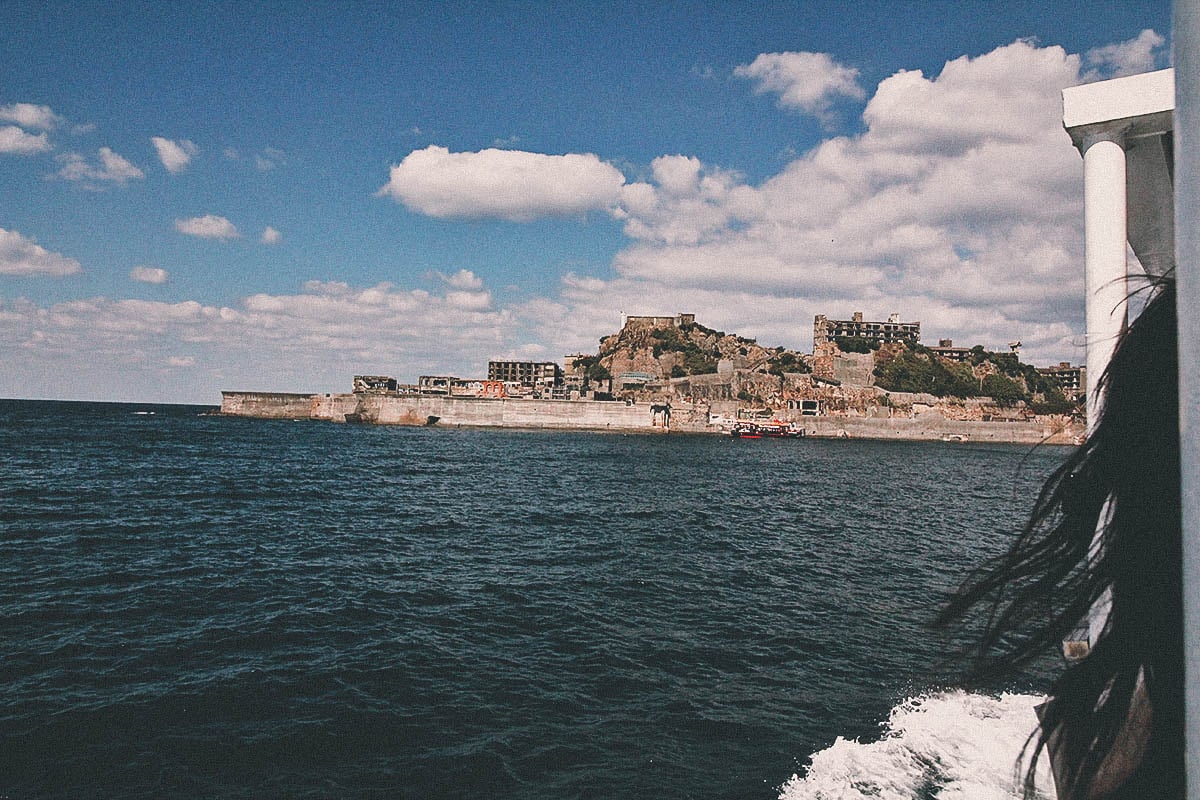 It really does look like a battleship doesn’t it? The island served as a coal mine until 1974. It housed over 5,000 residents at its peak, resulting in the highest recorded population density in history. 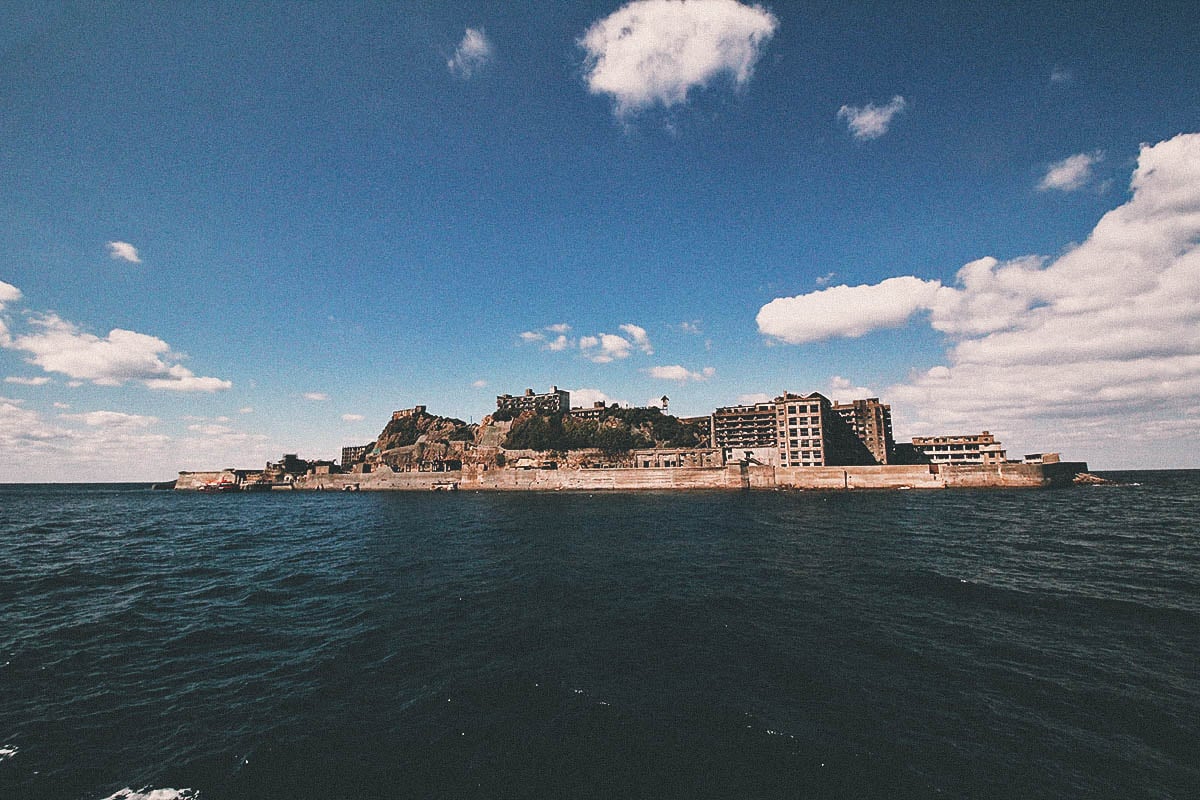 In April 1974, the coal mine was permanently closed and all the island’s inhabitants were made to leave Gunkanjima. It was left abandoned for 35 years until April 2009, when a newly constructed dock made it possible for sightseeing tours to land on the island. 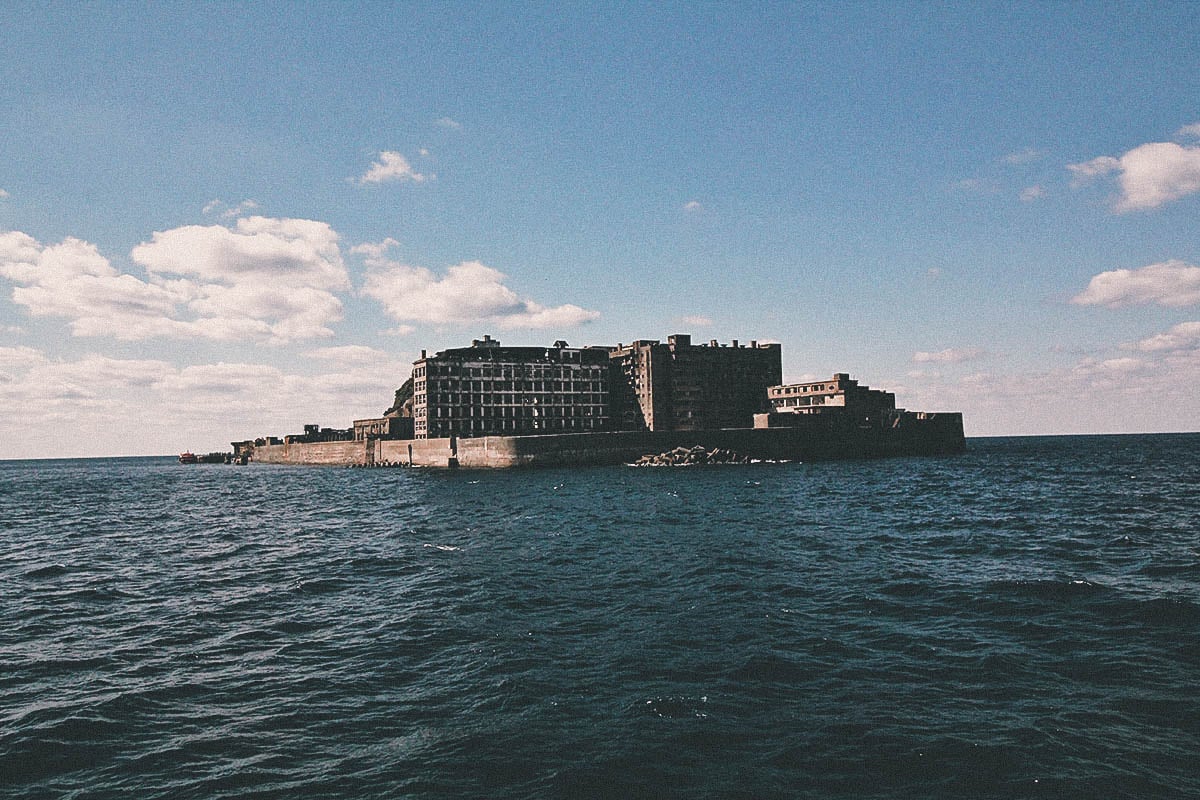 You’ve heard of the Mitsubishi Corporation yes? Interestingly, they bought the island in 1890 and were responsible for creating the residential environment inhabited by coal mine workers and their families. In its heyday, it had schools, a hospital, barber shops, a Buddhist temple, a movie theater, even a Pachinko parlor! 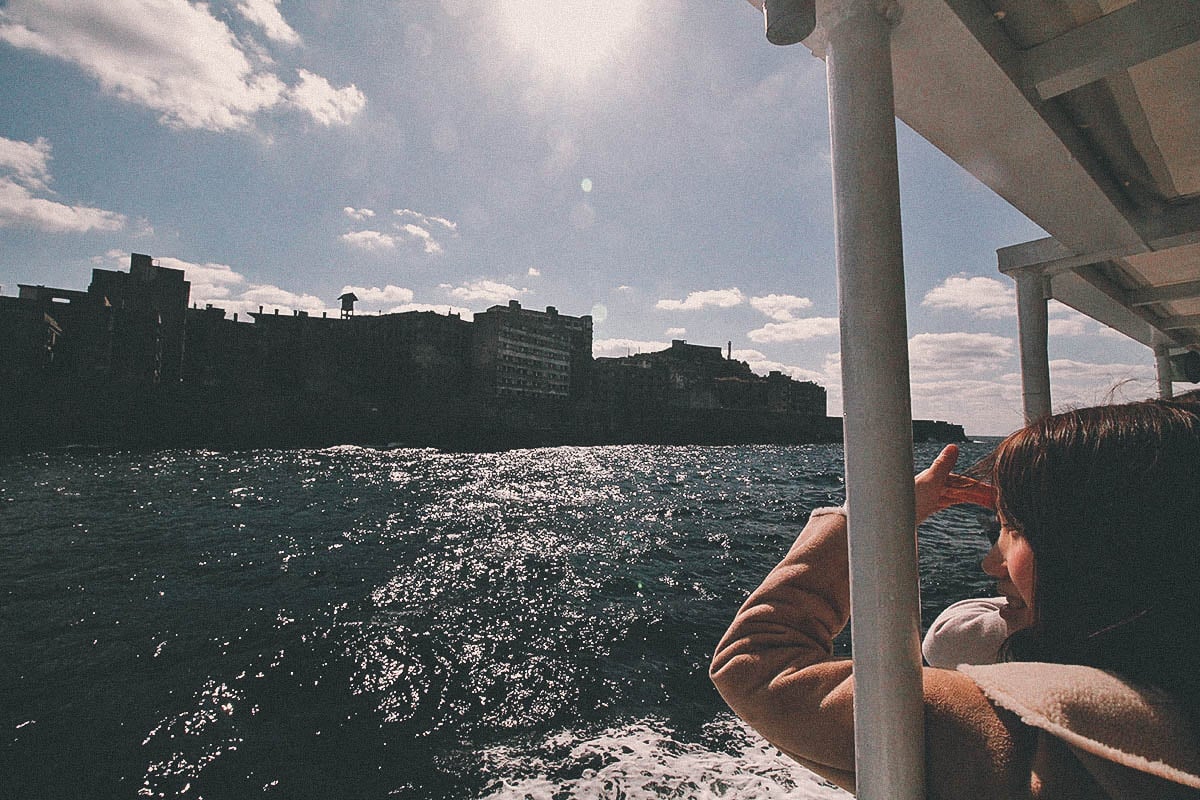 Having already circled the island twice, it was time for our captain to make that critical decision. Was it safe enough to land? 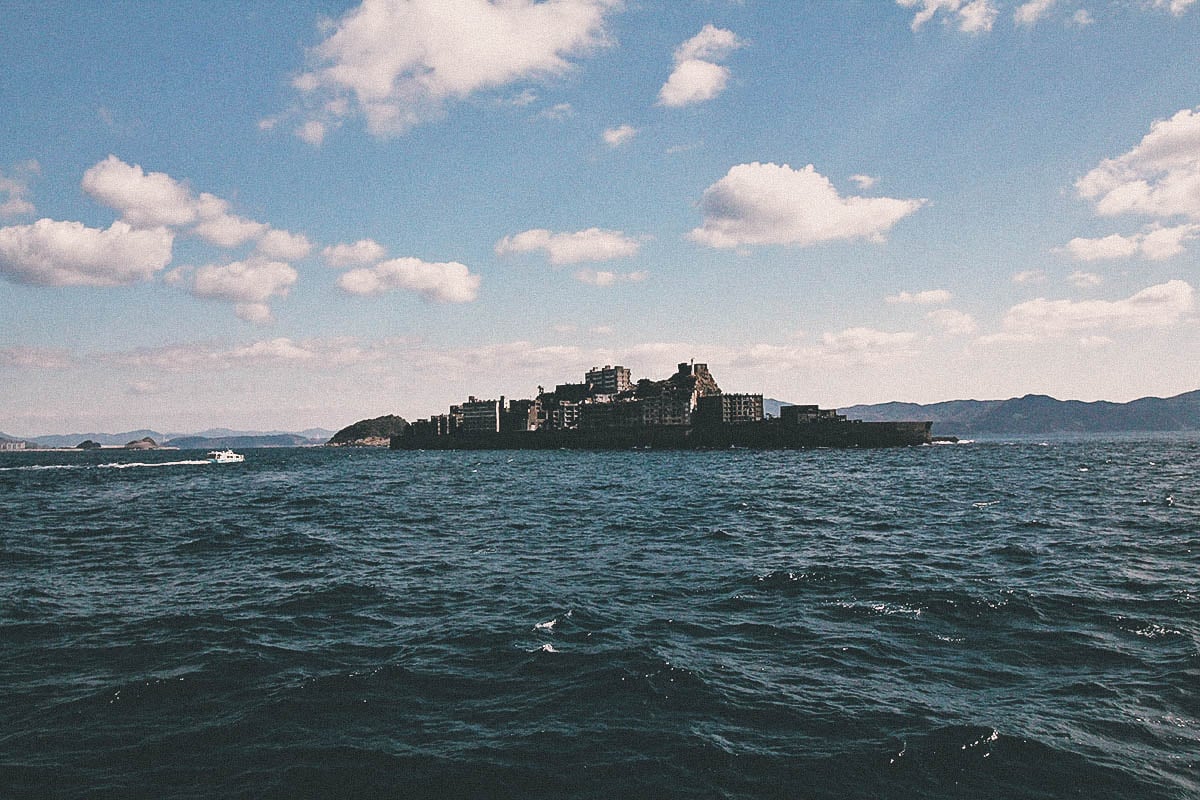 As luck would have it, it was! Woohoo! Never in my life have I been so happy to walk amongst rubble. 😆 Based on what I’ve read, there are on average just 100 days in a year when boats are able to land on Gunkanjima, so we were very lucky indeed. 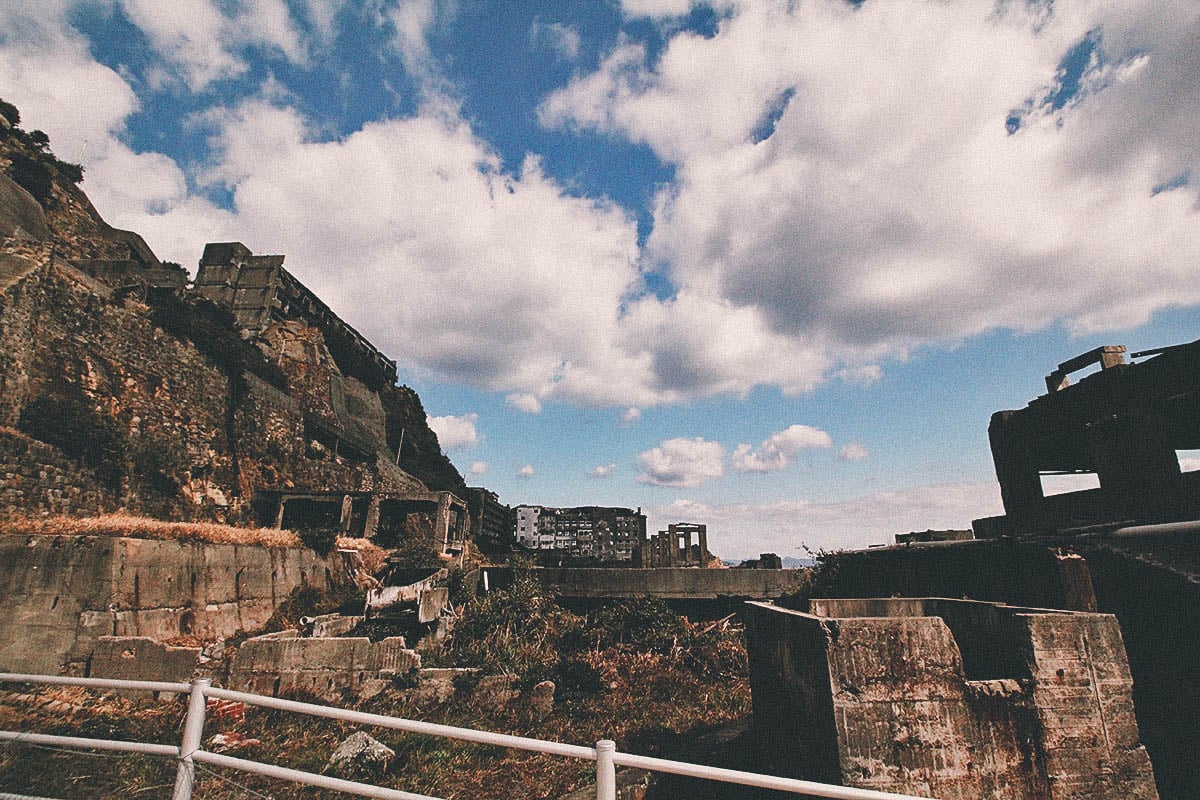 Having been left abandoned for so many years, it was obviously unsafe to venture out too close to the ruins. For your safety, you can’t explore on your own. Instead, there are a few designated stops on the island where tour guides would talk about Gunkanjima and you could take pictures. Total time spent on the island was less than an hour. 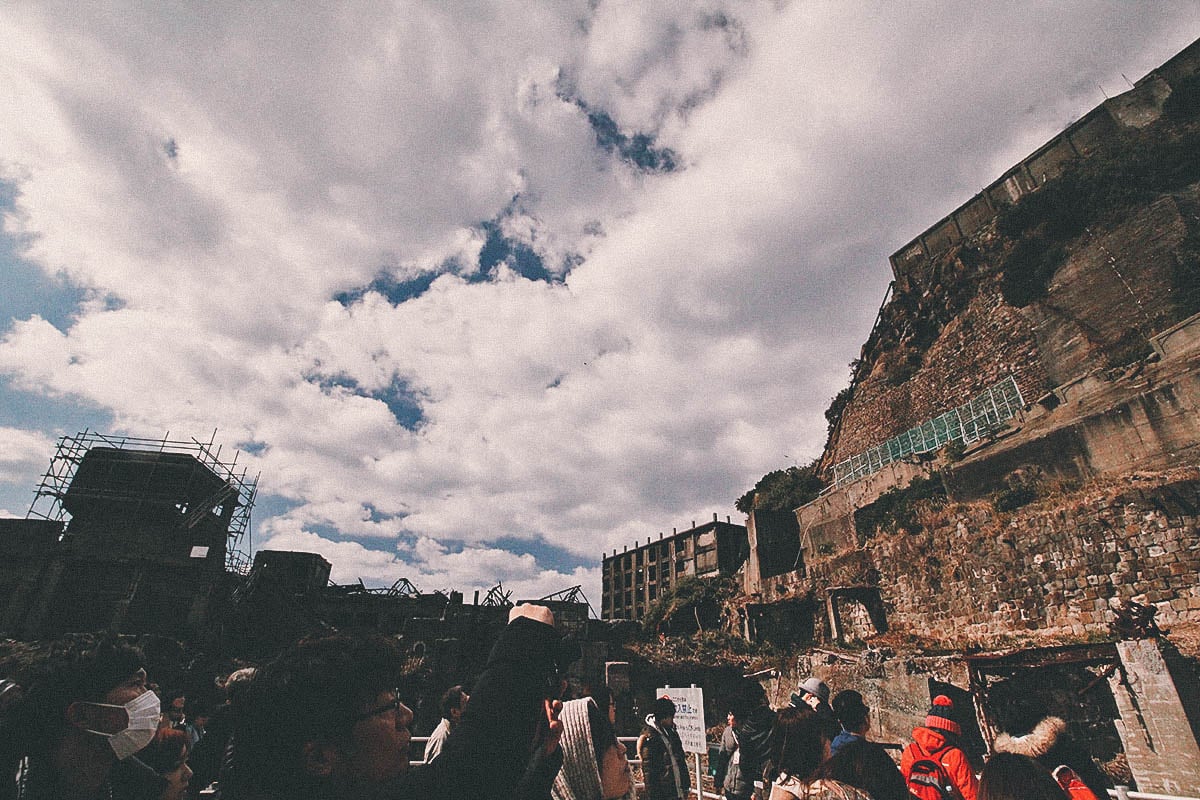 The tour guides’ explanations are in Japanese but you can tune in to your English audioguide. Surprisingly, the reception is better here than on the top deck of the ship. 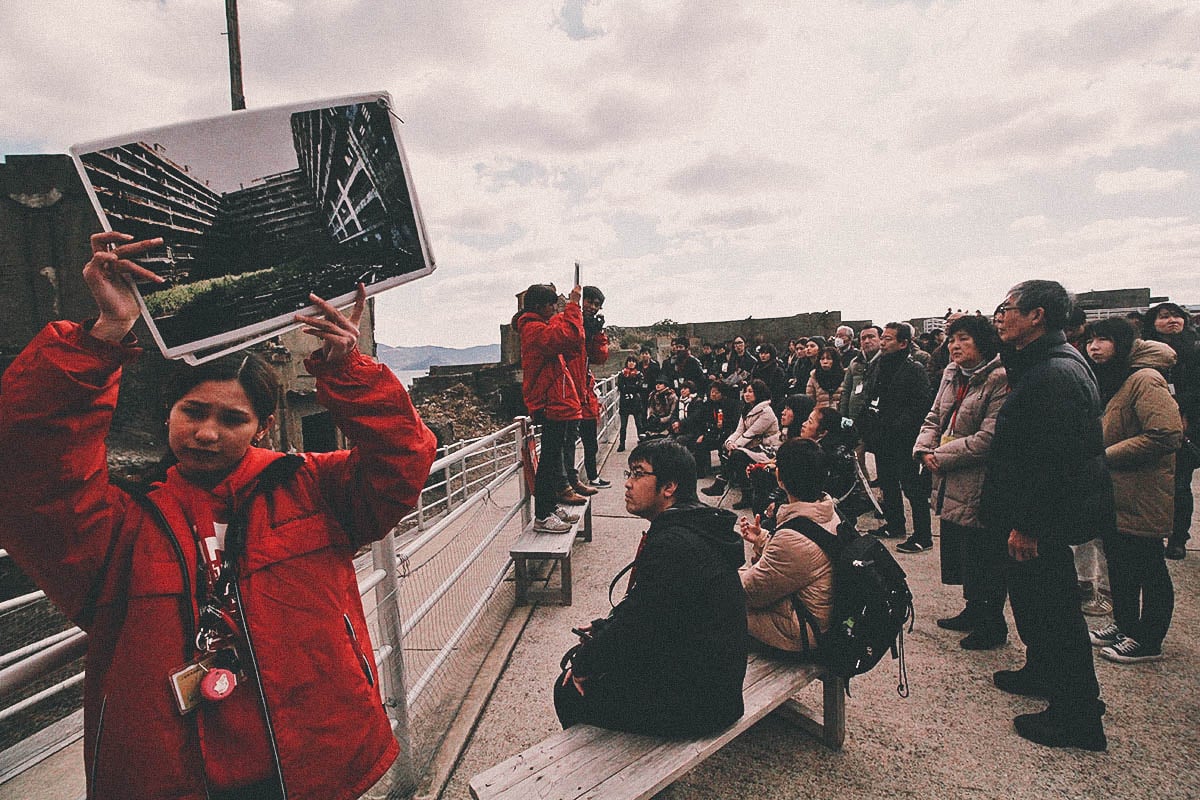 It’s funny, I had read about Gunkanjima’s dark history of forced labor before and during WWII, but the tour guides made it sound like it was the happiest place on earth. They told tales of lovers wooing and children playing but I don’t recall any mention of its controversial past. My English audioguide was spotty at times so either I missed it or it was completely left out. 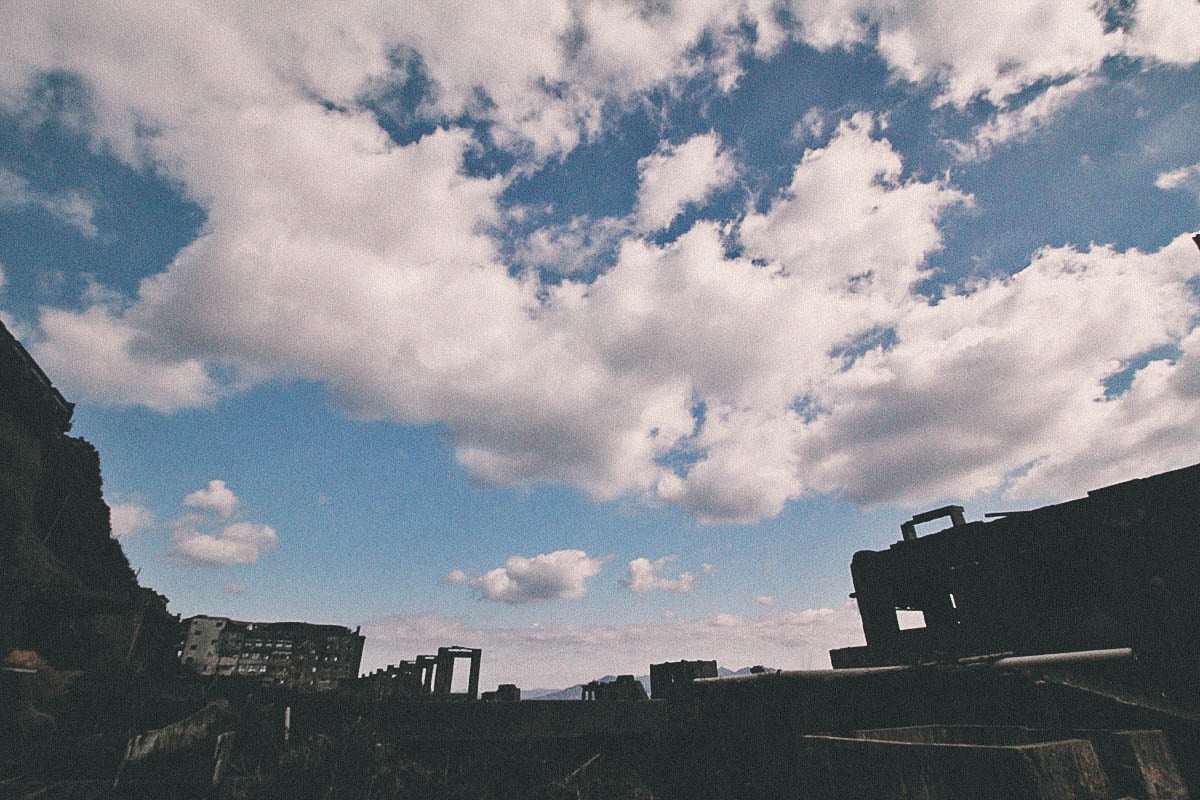 Japan is incredibly strict with their drone laws but this would have been the perfect place to fly one. Imagine flying above and between those buildings? It would have been so cool! 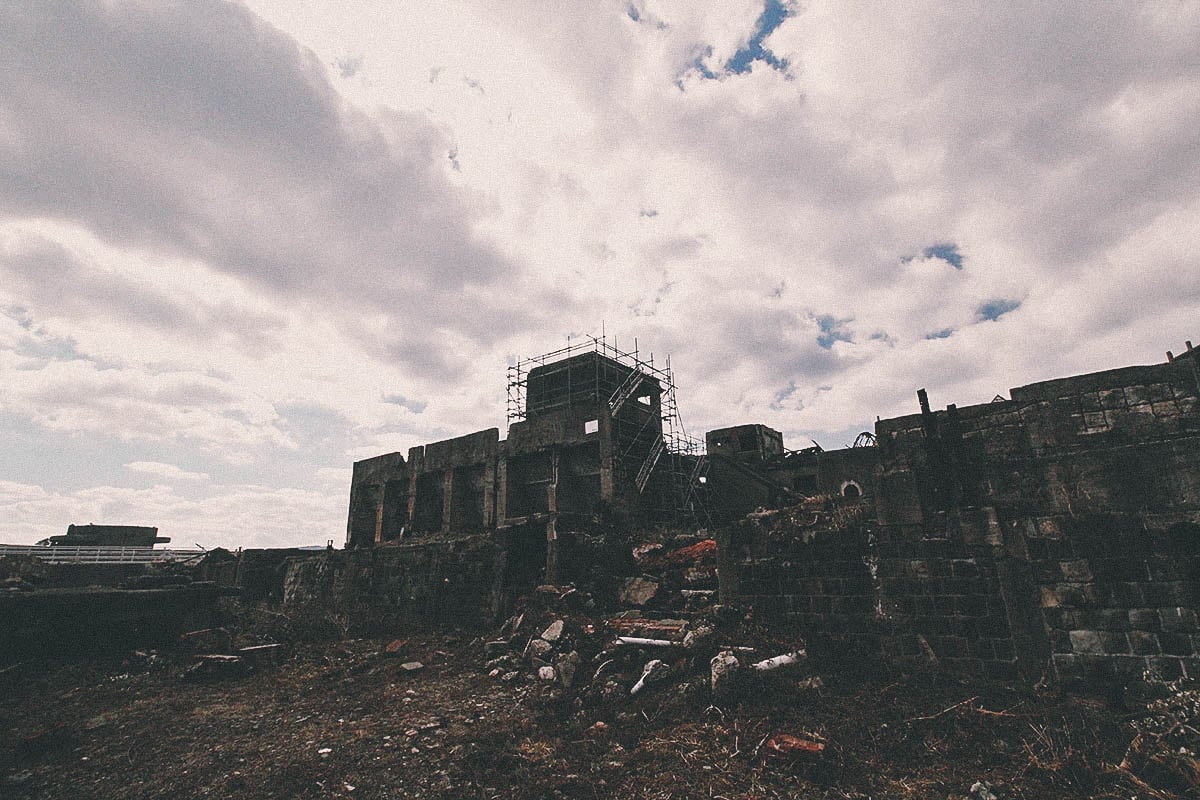 As described in the title of this post, Gunkanjima served as the inspiration for Raoul Silva’s secret hideout near Macau in the James Bond movie Skyfall. They used external shots of the island but for safety reasons, the film wasn’t actually shot in Gunkanjima. A section of it was recreated at Pinewood Studio in the UK with other parts rendered digitally. I haven’t seen Skyfall so I have no idea what those scenes looked like. 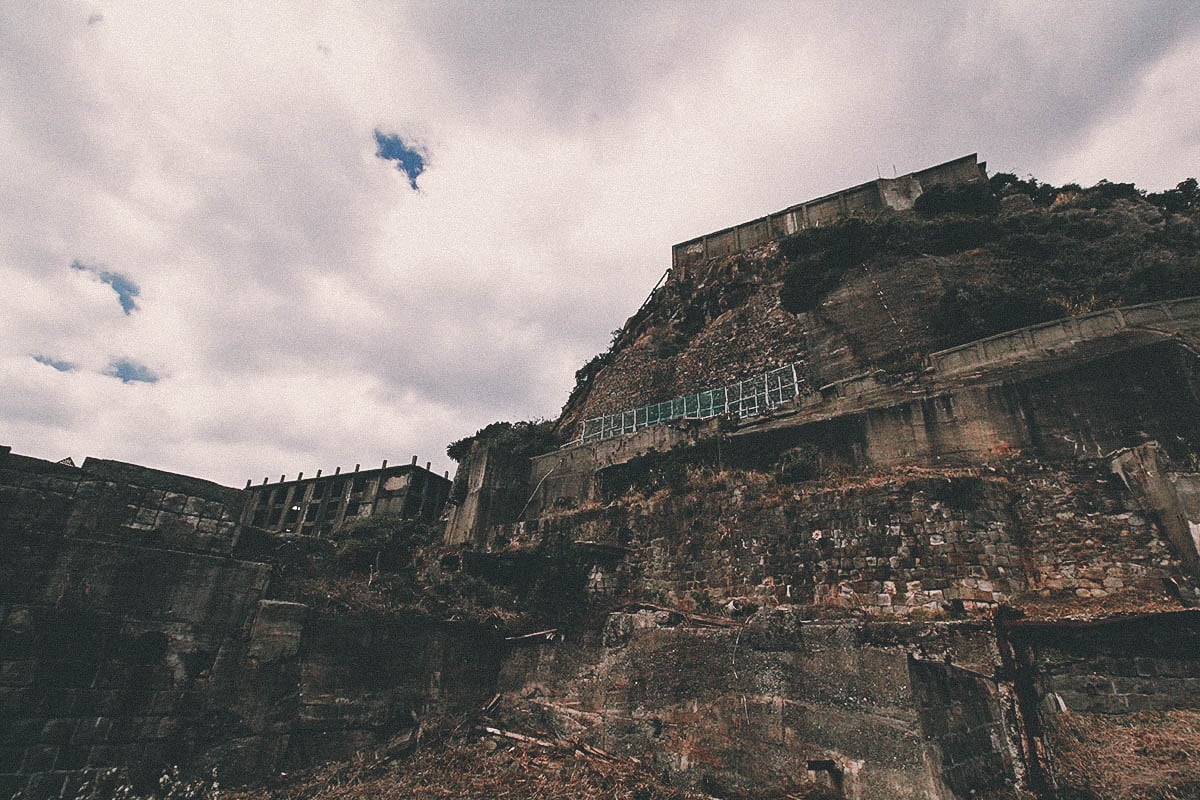 The island was the backdrop for other films as well, including the live action Japanese films based on the popular manga series Attack on Titan. 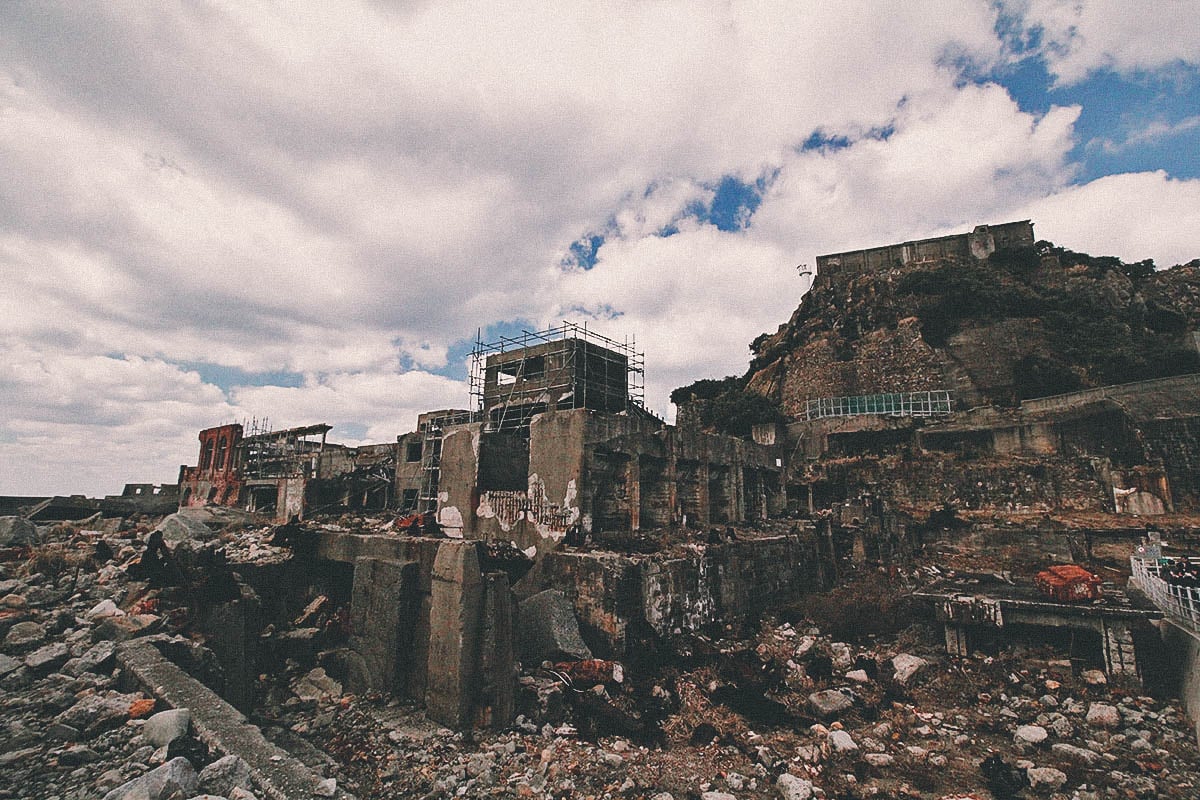 Touching on its dark past, I read that enlisted Korean civilians and Chinese prisoners of war were forced to work in brutal conditions in the coal mines from the 1930s to the end of the second world war. They were forced laborers under Japan’s wartime mobilization policies. During that period, an estimated 1,300 people died on the island because of underground accidents, exhaustion, and malnutrition. 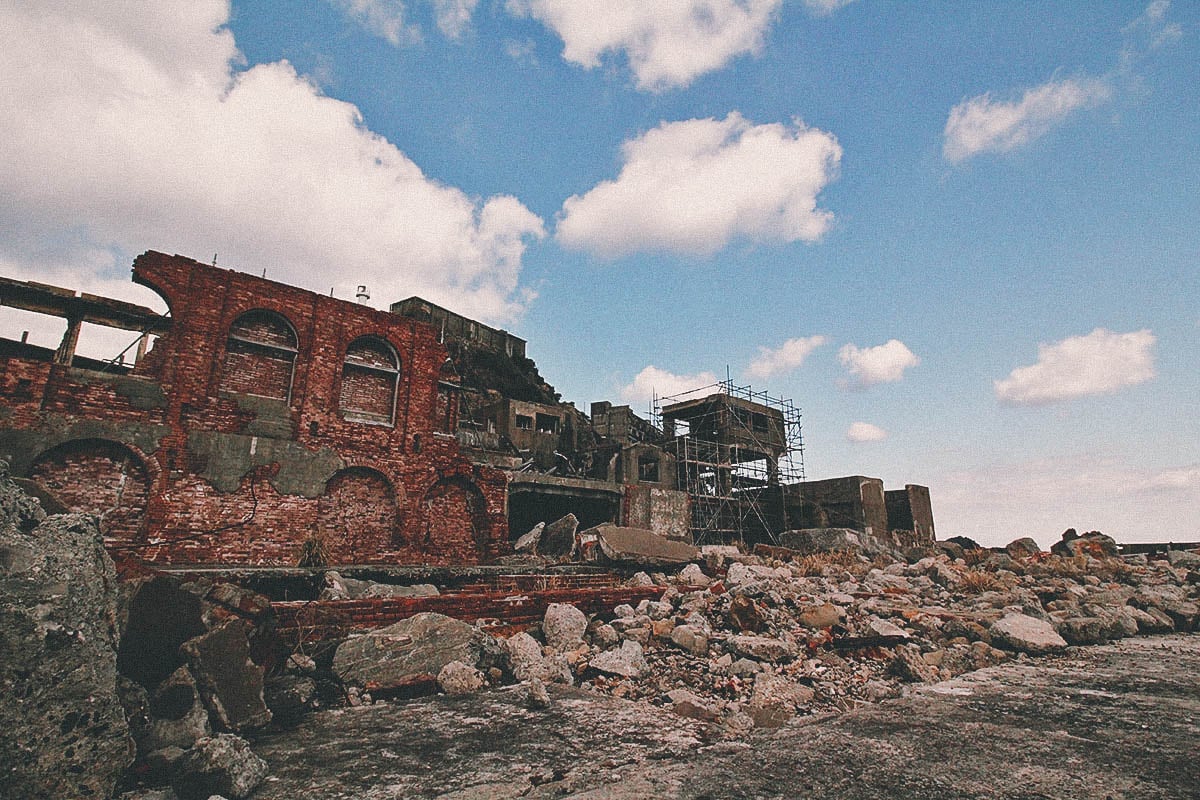 In 1959, the island reached its peak population of 5,259 residents. That’s a population density of 835 people per hectare, making it the most densely populated place in history anywhere in the world. 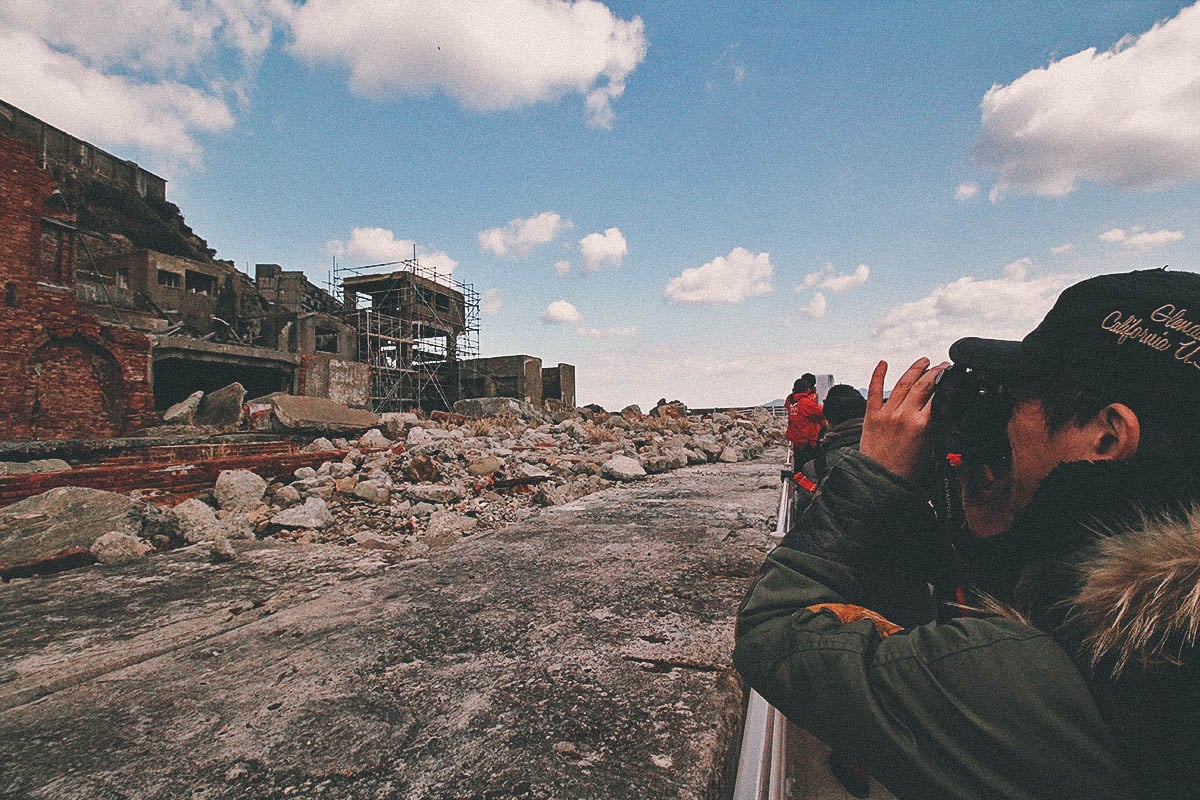 With petroleum replacing coal as Japan’s main energy source in the 1960s, coal mines began shutting down across the country, Hashima included. Mitsubishi closed the mine in January 1974, and cleared the island of its inhabitants by April of that year. 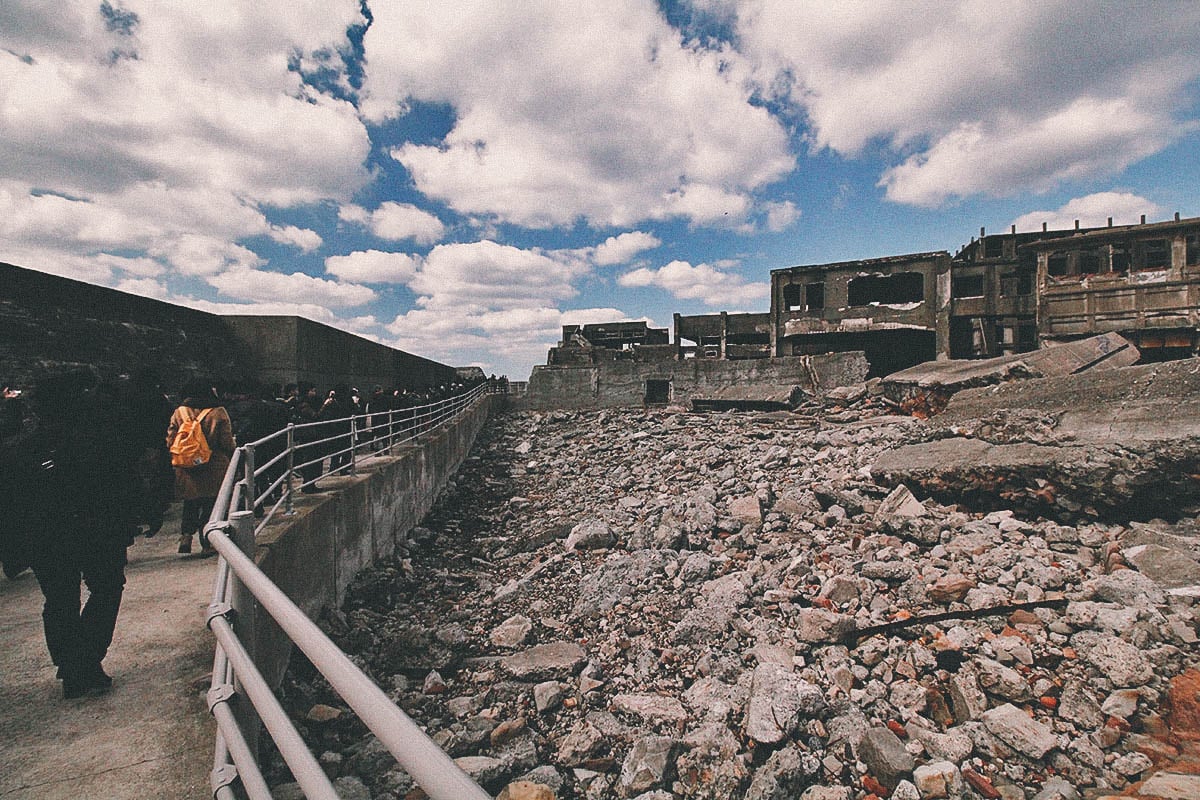 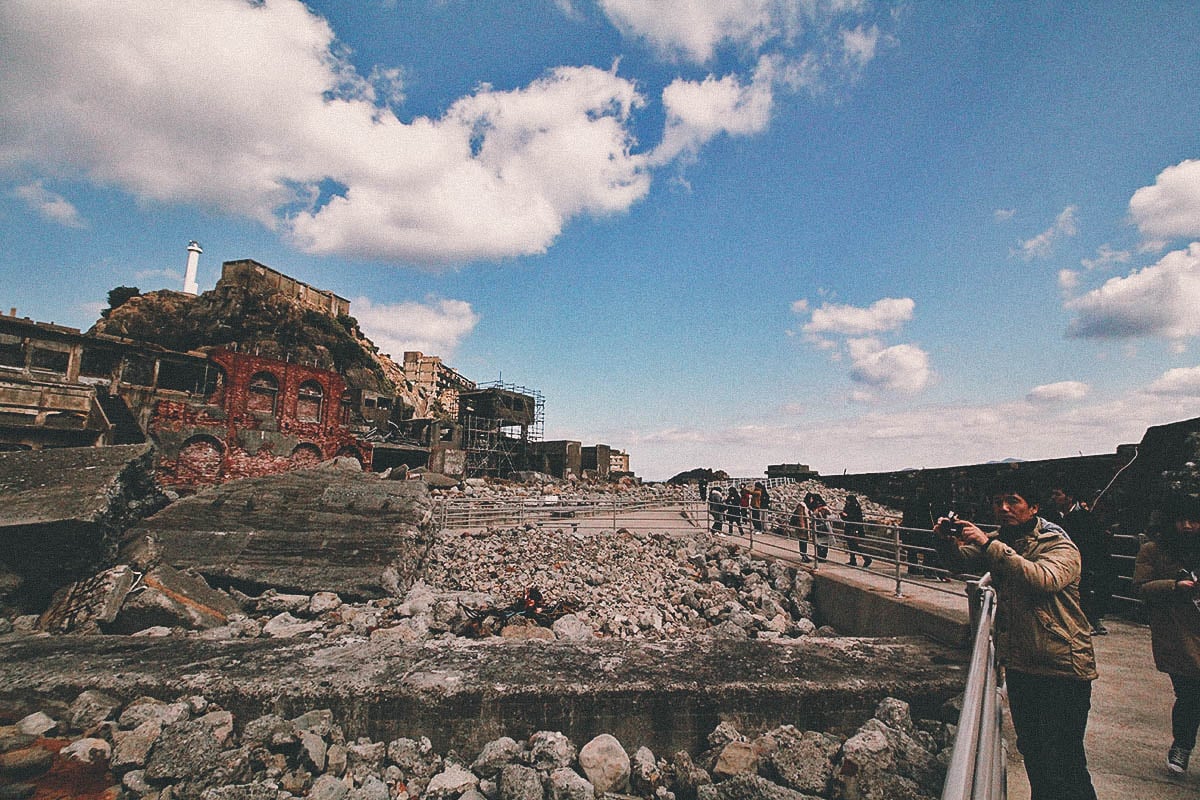 Inscribed as a UNESCO World Heritage Site in 2015, Hashima Island’s inscription wasn’t without controversy. It’s inclusion was initially opposed by South Korean authorities because of its history of Korean and Chinese forced labor. It was only when Japan agreed to acknowledge this part of the island’s history did South Korea withdraw its opposition. Gunkanjima was approved for inclusion in the UNESCO World Heritage list on July 5. 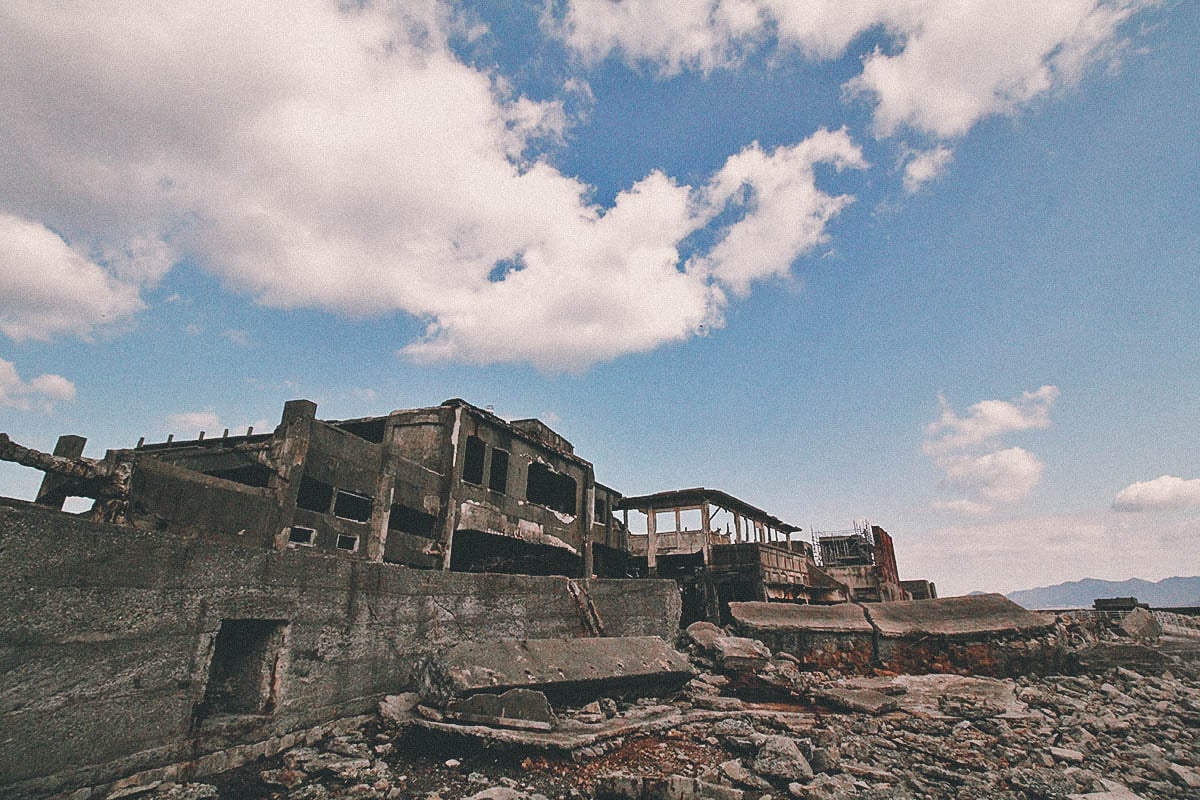 Shortly after the UNESCO World Heritage Committee meeting, Japanese Foreign Minister Fumio Kishida publicly announced that the remarks – “forced to work under harsh conditions” – did not necessarily mean “forced labor”. As they say, denial is not just a river in Egypt. 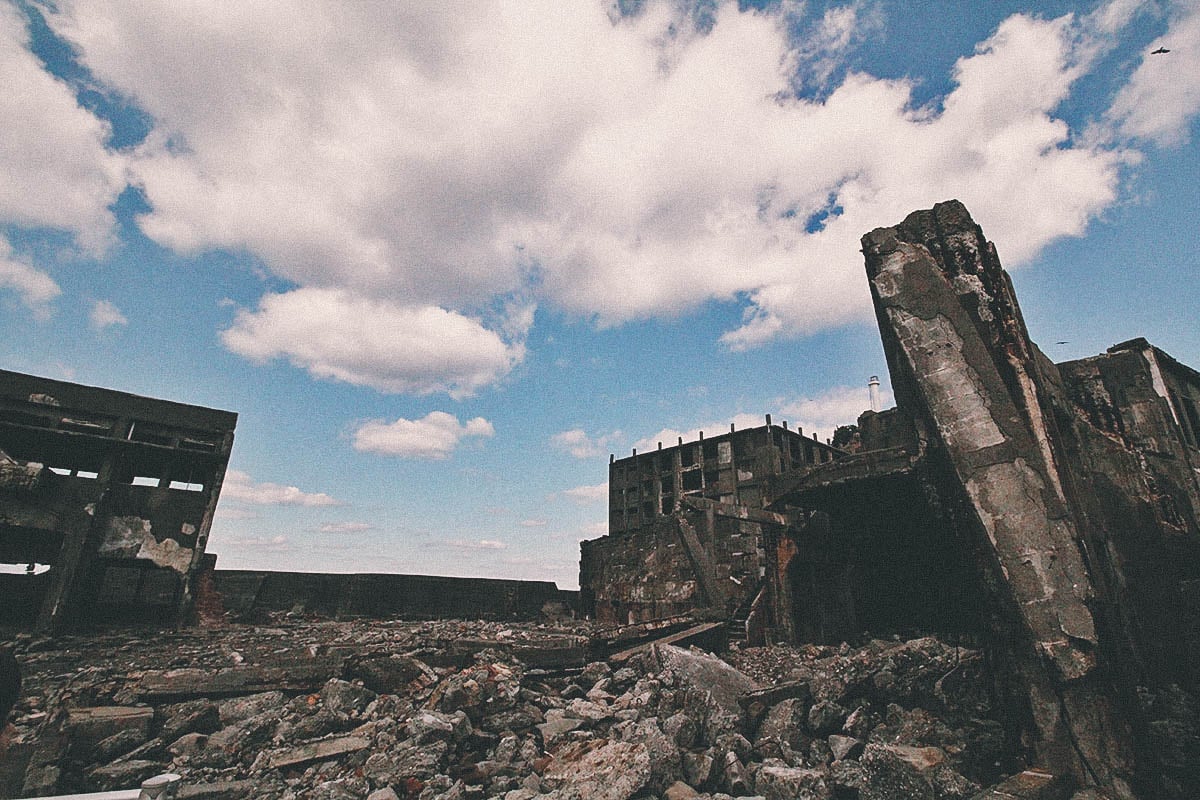 I didn’t want to look too closely at the buildings lest I see something that reminded me of Gunkanjima’s dark past. 😯 Whatever the truth may be on the forced labor controversy, there’s no doubt in my mind that many people died here. 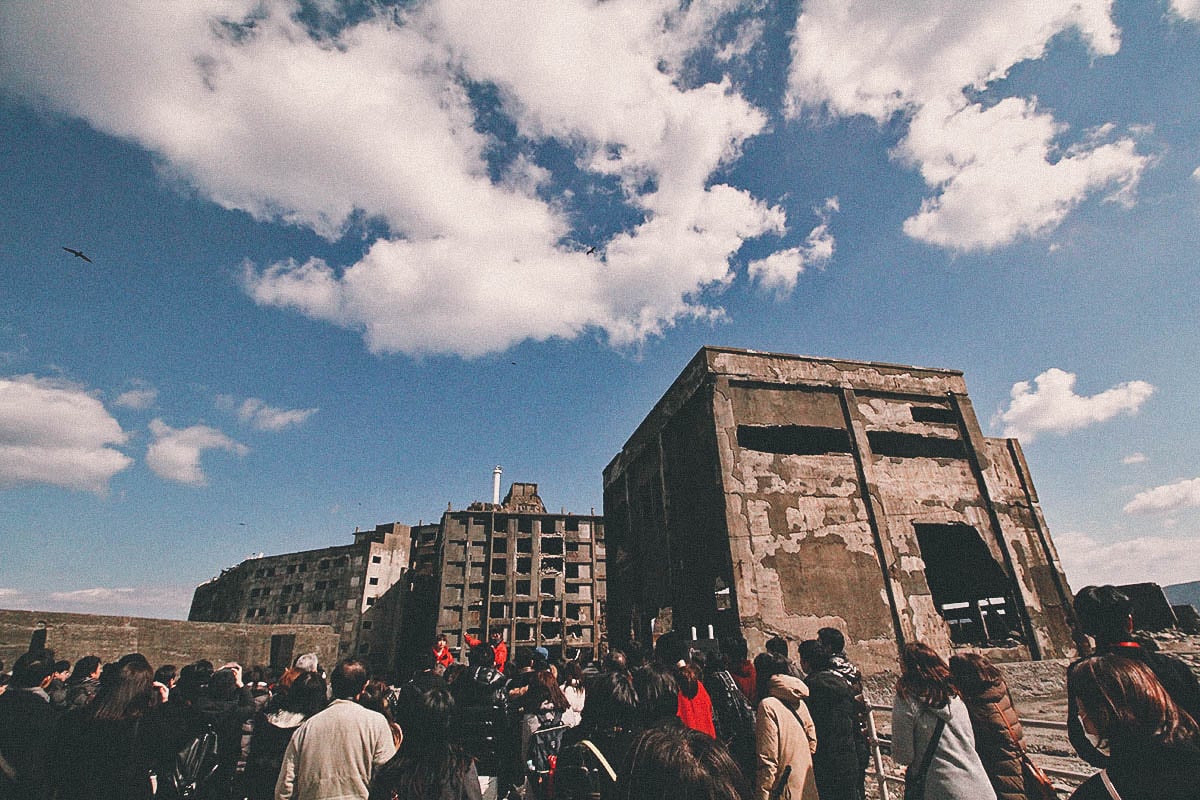 On the perimeter wall of the island were these fishermen. 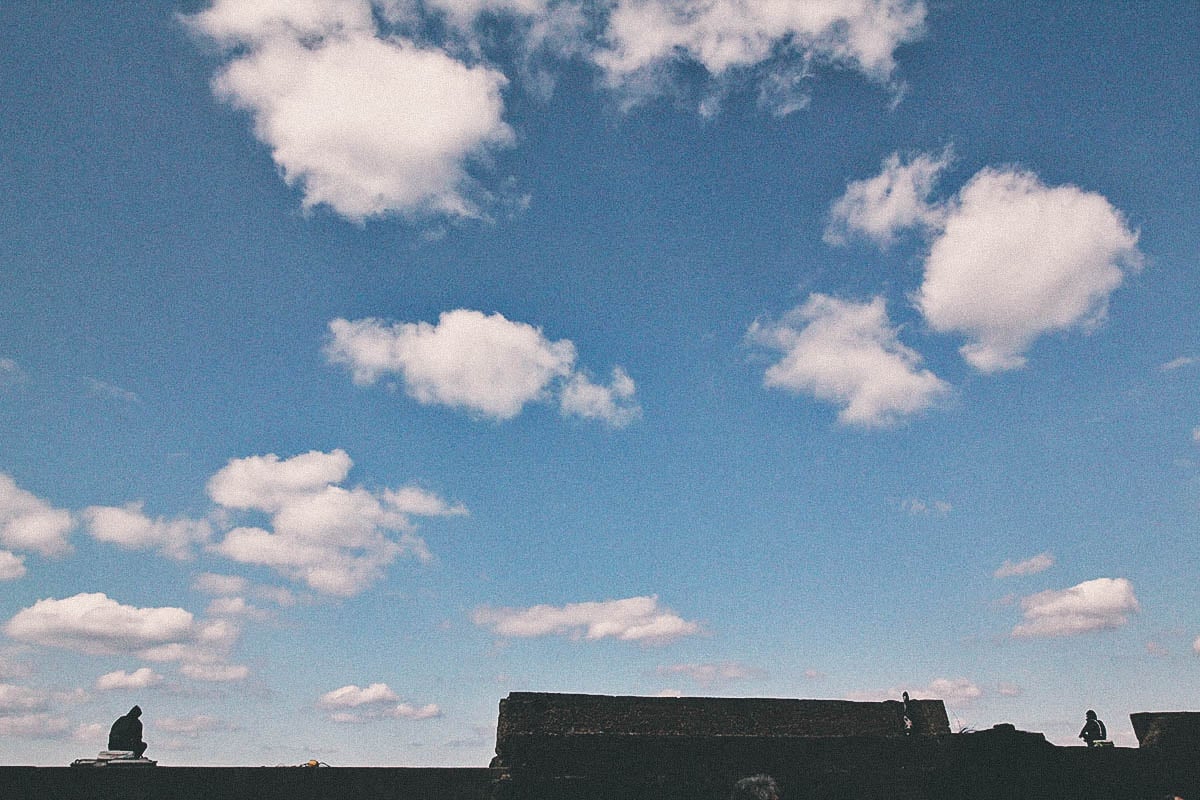 I didn’t see them catch anything, except maybe a few compliments when I posted this picture on Instagram. 😛 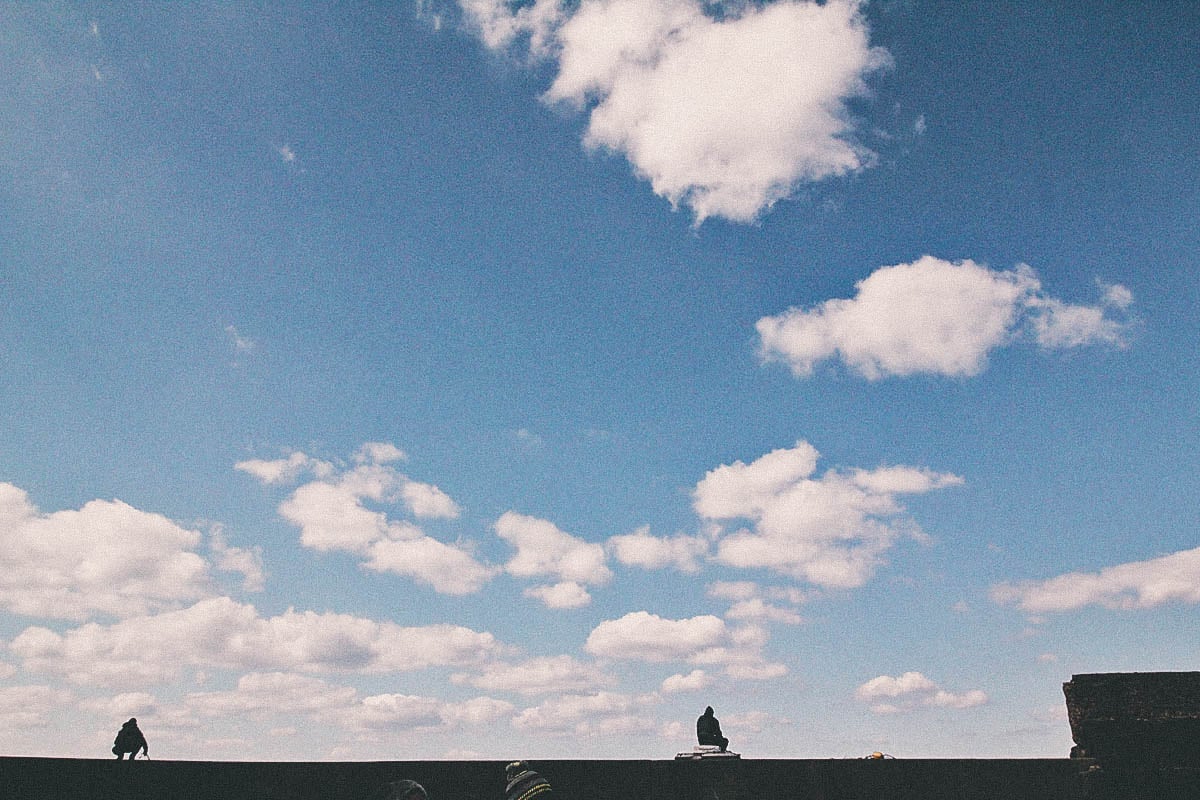 At the start of the tour, we were asked to sign this waiver. I got a kick out of the last stipulation. Remember kiddies, Pokemon Go and PPAP are highly disrespectful so no doing the “pen-pineapple-apple-pen” dance on Gunkanjima! 😆 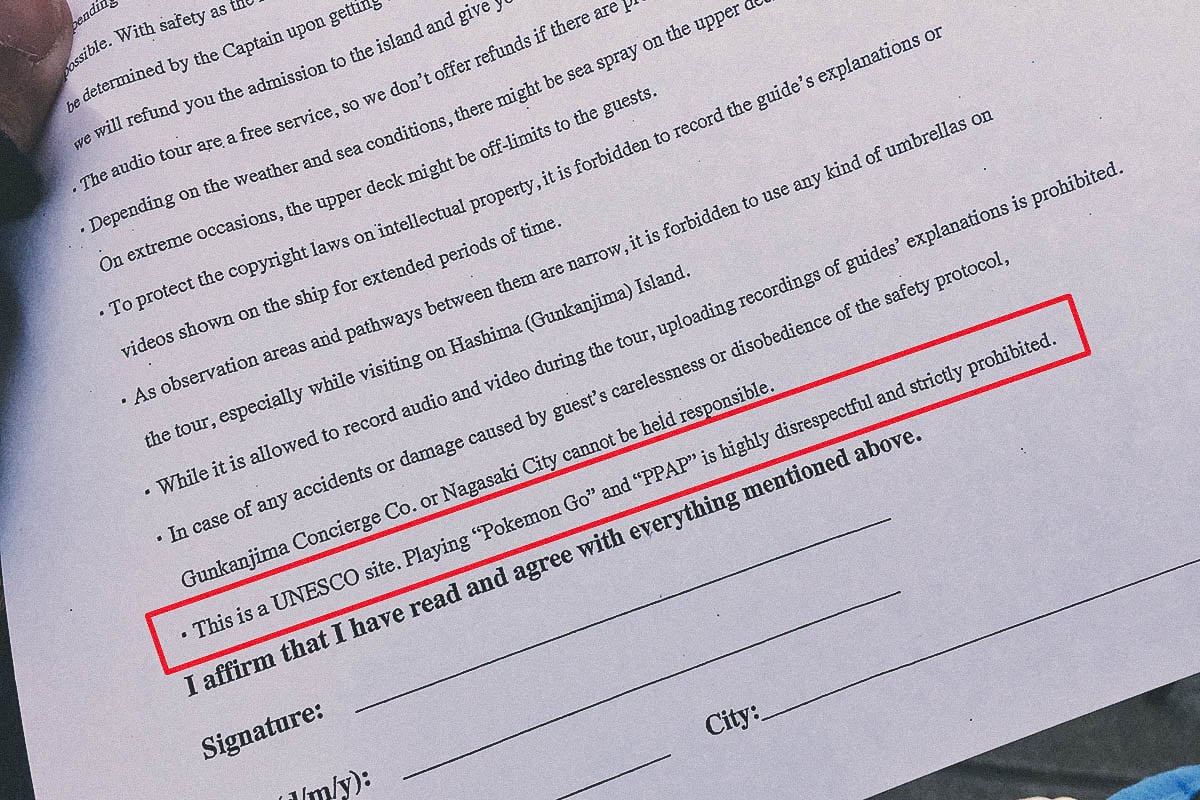 Without question, Gunkanjima is one of the most interesting sites I’ve ever visited on a trip. It isn’t the most beautiful or Instagram-worthy, but it’s unique and highly provocative. If you’re into unusual destinations, then Gunkanjima is definitely for you.

As described, there are many factors involved so this tour isn’t without its risks. Whether or not you get to land on the island is highly dependent on the weather. Based on what I’ve read, some months are better than others, with November to February being the most ideal. You can check the landing rate chart on this tour provider’s website to get an idea. Just scroll down to the middle of the page to see their shipping/landing rates per month.

But even if you’re able to go on a month with a higher landing rate, understand that anything can still happen and landing on the island is never guaranteed. No matter when you go, just expect the worst and hope for the best. Also, the trip can be rough so if you’re prone to seasickness or have mobility issues, then you may want to reconsider going on this tour. Ren gets seasick easily which is why she didn’t join me.

As advised, these tours fill up so it’s important for you to make a reservation as early as possible. You can book with Gunkanjima Concierge through their website. If for some reason you don’t think they’re the best tour company for you, then you can check Gunkanjima Cruise or Yamasa Shipping Company as well.

HOW TO GET THERE:
Take the tram to O-Urakaigandori station. Cross the street to the Gunkanjima Concierge office at Tokiwa Terminal.

Gunkanjima was the perfect bond villain lair for Skyfall. Looks like a great visit too!

Hey Chris, yep it's interesting and unique for sure. :)