You may have heard of the farm-to-table movement, but have you heard of fish-tank-to-table dining? Probably not, because I just made it up. But that’s bascially what a dampa is.

The word dampa in Tagalog literally means “hut”, but when used in conjunction with fresh seafood, it connotes a row of restaurants which cooks fresh seafood at the request of the diner. What makes the concept fun and unique is that the fresh seafood is conveniently sold in nearby stalls. Often kept in tanks and still alive, it’s bought by the diners then brought to the restaurant to cook according to the guest’s wishes.

Got squid? Would you like that fried or stewed adobo-style? Well, yes and yes! 😀

If you like seafood and don’t mind the soppy, fishy, often stinky conditions of an authentic wet market, then a visit to a dampa in the Philippines is a must.

The Seaside Market dampa is along Macapagal Boulevard in Pasay City, Manila. It’s a short drive to Mall of Asia (MOA), Intramuros, and the National Museum so you can pair it with any of those destinations if you like. There’s a large Balikbayan Handicrafts store across the street from the dampa as well. It’s one of the best places to buy native items and souvenirs. 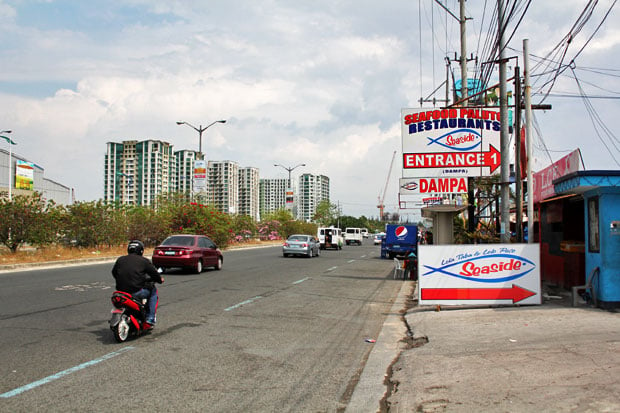 Scallops. We started off with half a kilo of these beauties for PHP 175. That translated to well over 20 pieces! It’s important to note that restaurants here have a minimum half kilo cooking charge. So even if you bought one-fourth kilo of seafood, you’ll still be charged for half-a-kilo’s worth to cook it. For that reason, it’s best that you buy no less than half a kilo of anything. 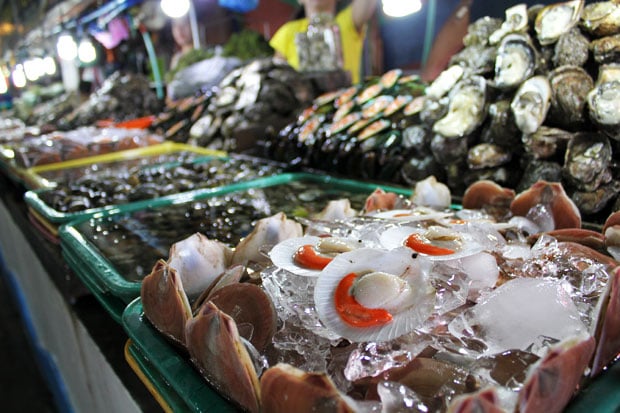 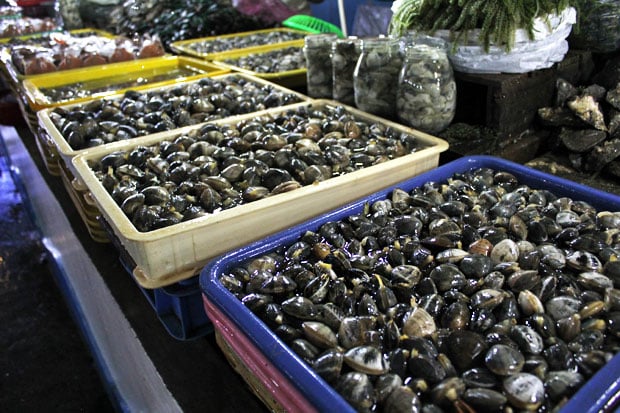 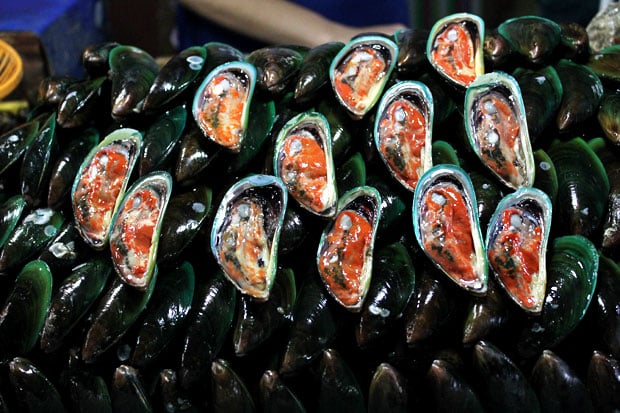 Oysters. We got a kilo of these for PHP 100. That amounted to about 12 oysters. 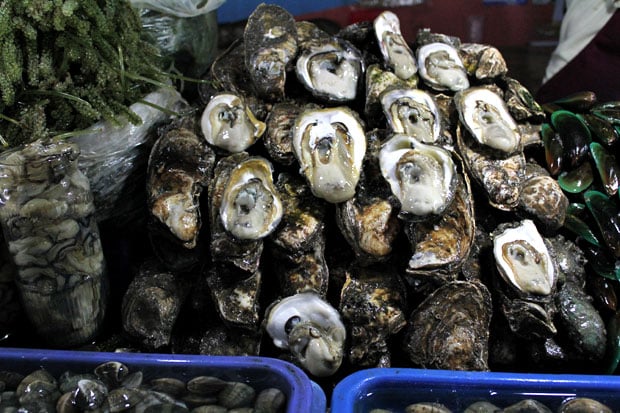 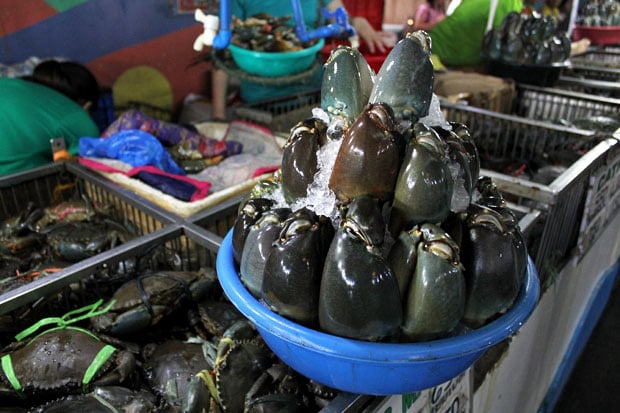 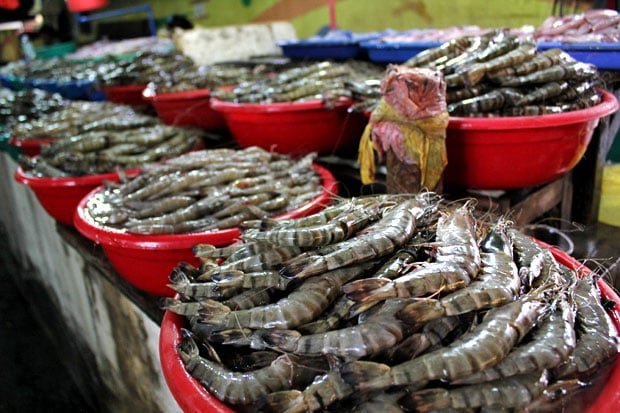 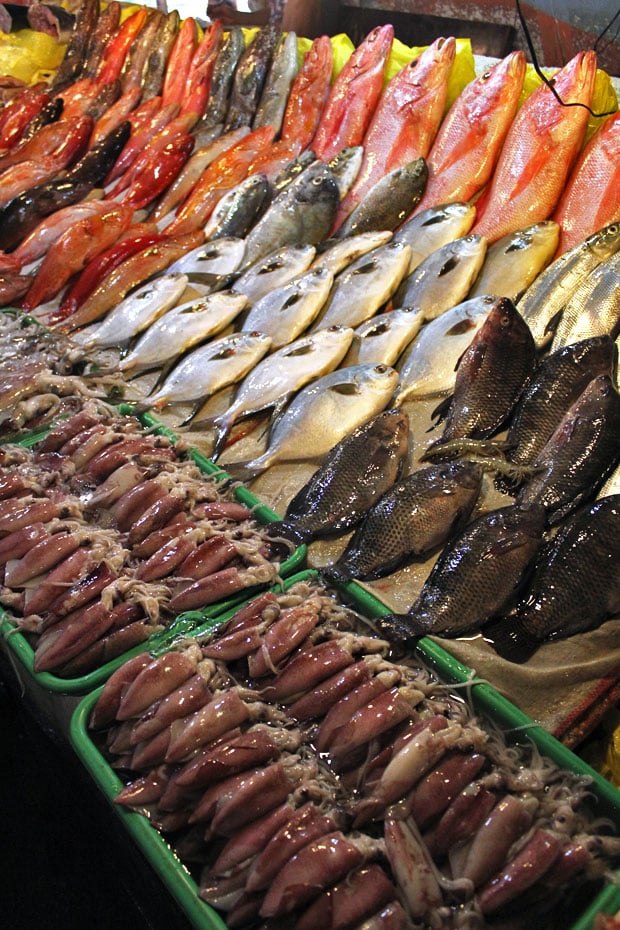 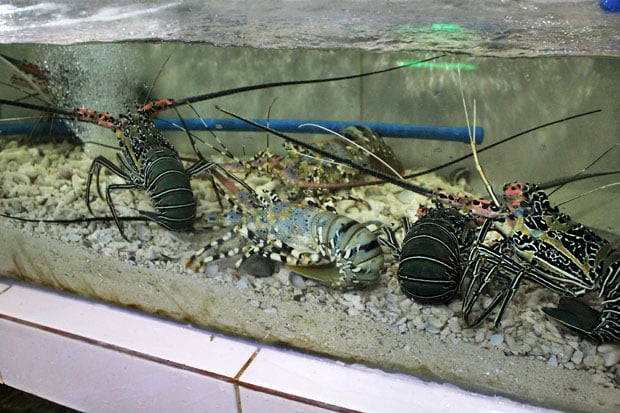 Now for some of the more exotic stuff. Here’s a tank full of live mantis shrimp individually kept in plastic soda bottles. The reason they’re kept this way is because mantis shrimp are sea-dwelling ASSASSINS.

They possess two appendages called smashers that are capable of dismembering each other AND breaking aquarium glass. Yup, you read that right. Accelerating with the same velocity as a gunshot from a .22 caliber rifle, they can strike prey with 1,500 Newtons of force in less than three-thousandths of a second. To put that in perspective, if we humans could accelerate our arms at 1/10th that speed, we’d be able to throw a baseball into orbit. WOW.

Mantis shrimp are expensive but I have tasted them once before. They’re similar to shrimp or lobster but just a little hard to separate from their shell. You can read more about these fascinating alien-like creatures on THE OATMEAL. 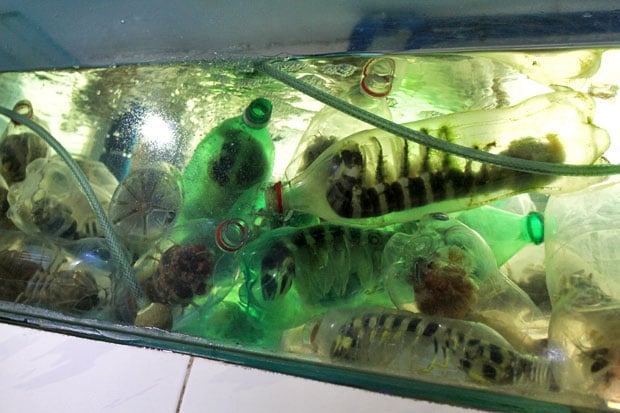 Meet the stonefish, the world’s most venomous fish. I’m not sure how they’re prepared here but they’re commonly eaten in Japan as sashimi called okoze. I’d love to try this. 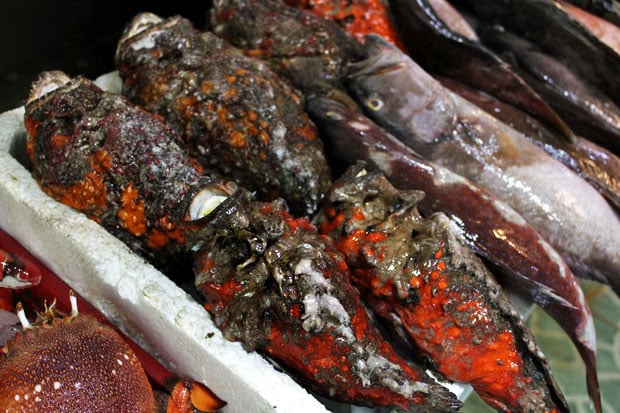 Spanner crabs or red frog crabs locally known as curacha. Commonly found in the waters of Sulu province and Zamboanga, the curacha is a hybrid crustacean with crossbreed characteristics of a large sea crab and a big spiny lobster. Unlike most crabs, they’re red when alive and stay the same color when cooked. 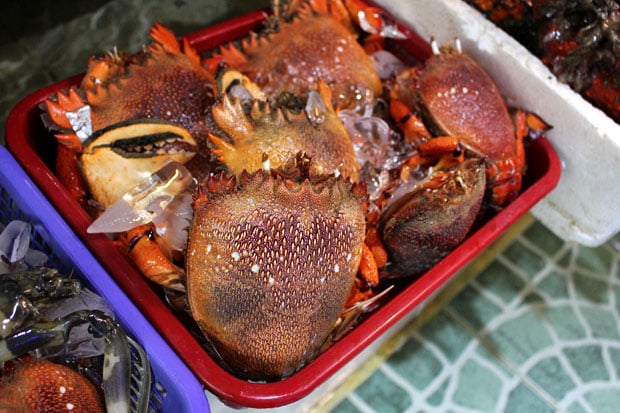 After buying your fresh seafood, you take them to one of these many paluto restaurants to cook. Paluto in Tagalog means “cook to order”. I didn’t know which restaurant was supposed to be good so we just randomly picked one. I think they’re all pretty much the same. 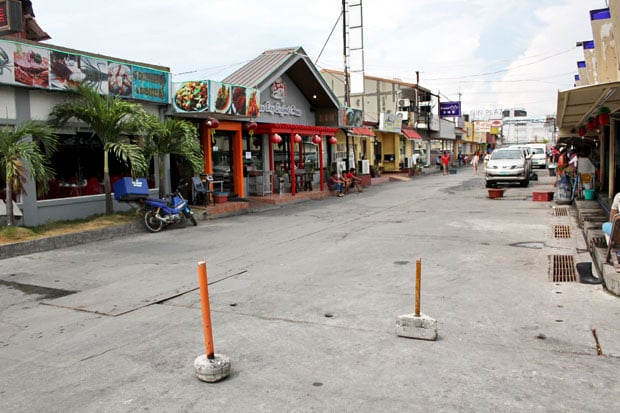 We had our scallops baked with cheese. Too much cheese in fact. They were good but the cheese became a little unctuous and overwhelming after the fourth or fifth scallop. 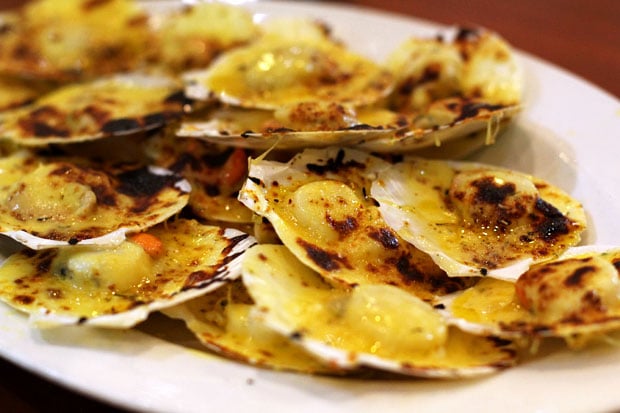 Our oysters were used to make this delicious oyster omelette. 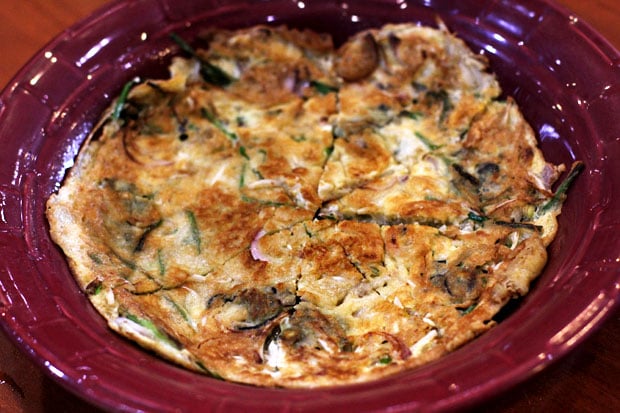 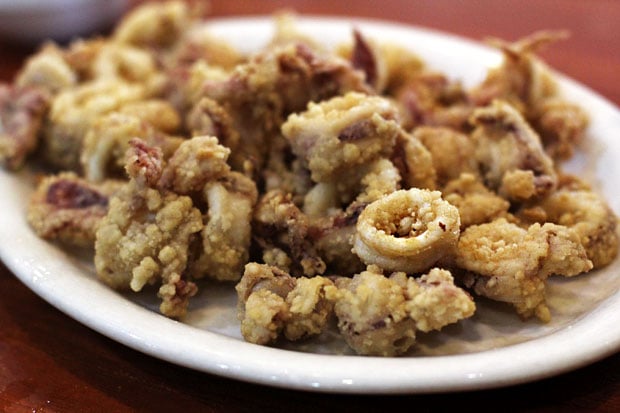 To go with our seafood, we got this “small” order of Yang Chow fried rice that was probably big enough for four. 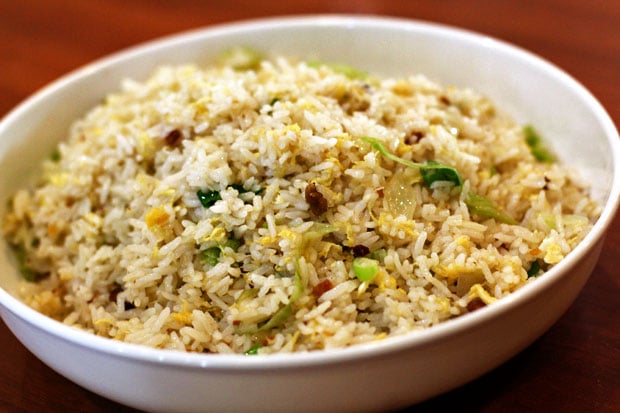 And a refreshing bowl of mango sago to wash it all down. Sago balls are similar to tapioca balls. 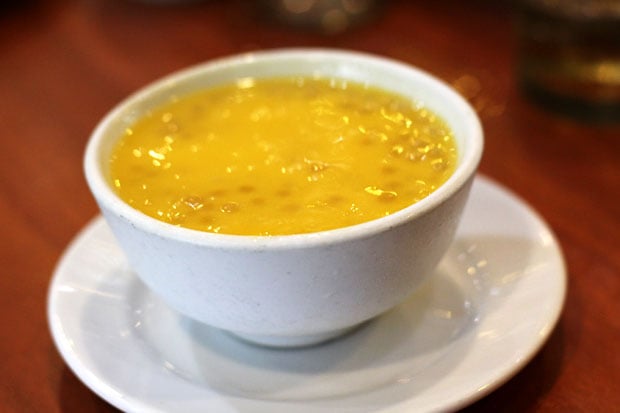 Our bill to cook the seafood came out to around PHP 1,200. That includes the order of fried rice, two bowls of dessert, six beers, and tip. All in all, we spent about PHP 1,650 for everything. Not bad, considering that we had enough food for four people. We wound up bringing home the rest and enjoying it for dinner that night. Half a kilo of seafood is usually too much for two people so dampa meals like this are best enjoyed in larger groups. That way you can get more variety as well.

If you’re a fan of Anthony Bourdain and have seen that Philippine episode of No Reservations, then you can visit the same dampa he went to. It’s at Farmer’s Market in Cubao, Quezon City. You can check out THIS POST for more information. Please be advised that my post on Farmer’s Market is over two years old so prices may have risen since then.

Thereatened by extinction, some marine wildlife are protected under Philippine law but that doesn’t stop some people. I was happily snapping away when the vendor pulled out this fish from his secret stash and plopped it in front of me. “Ser, endangered po ito!” (Sir, this one’s endangered!) he proudly said. 😐

What you’re looking at is a juvenile Napoloeon wrasse, locally known as mameng. One of the world’s most valuable live food fish, specimens can fetch up to PHP 6,000 a kilo at posh seafood restaurants in Hong Kong, Singapore, Taiwan, and Malaysia. They were selling this one today for PHP 1,200 per kilo, PHP 12,000 for a whole fish of this size if alive.

I’m not sure if it’s protected yet but the fish to it’s right, the red one with spots, is also being threatened by overharvesting. It’s a leopard coral trout and another of Asia’s most sought-after reef fish. 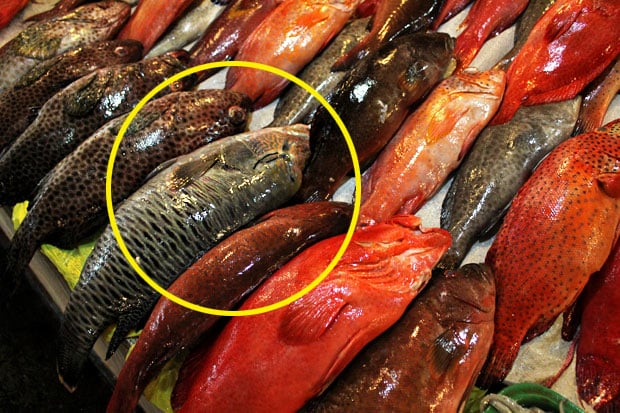 Another fish that needs our protection is the jewel-like parrotfish. Colorful and voracious herbivores, parrotfish spend up to 90% of their day eating algae off of coral reefs, keeping them clean and healthy in the process.

On top of that, they keep our beaches nice and “beachy” by pooping sand. Unable to metabolize the coral it inadvertently eats, parrotfish poop it out as sand, accounting for up to 70% of the sand found on tropical beaches. In fact, they spend so much time eating and pooping that each parrot fish can produce up to 100 kg of white sand every year!

If you visit the dampa and are offerend any of these threatened fish, please don’t buy them. 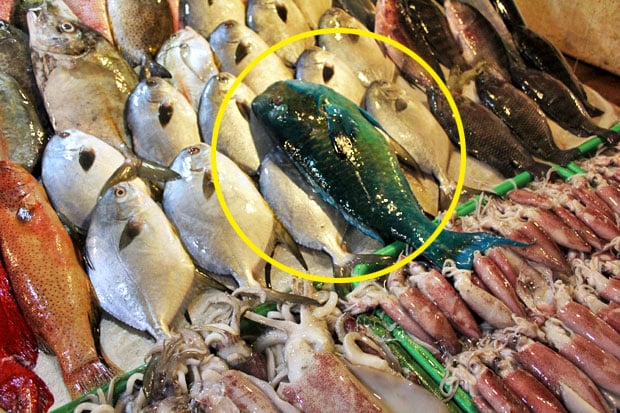