We had just polished off two big bowls of Hakata ramen at Ganso Nagahamaya so we weren’t supposed to be thinking about food, at least not so soon. But the moment we stepped out of the restaurant, there they were in a row, just across the street.

At first, we weren’t sure what they were. They looked like shanties or shuttered newsstands. We couldn’t see any people from where we were standing but every one of them was lit from the inside. Could these be those famed yatai food stalls that Fukuoka is known for?

I had read about them when doing research for this trip but I wasn’t expecting them to look like that. They looked like glowing cubes of light! We crossed the street to get a better look and sure enough, people were inside. And as we suspected, they were eating.

We were still too full at that point to eat again, but with just one night in Fukuoka, we couldn’t let a bellyful of ramen get in the way of this yatai experience.

I was a fan of The Transformers as a kid and these reminded me of those energon cubes from the cartoon. It was the middle of winter so all the stalls were boxed up, but they do open them up in warmer weather. There are over 150 yatai clustered in certain areas of Fukuoka – mainly Nakasu, Tenjin, and here at Nagahama. 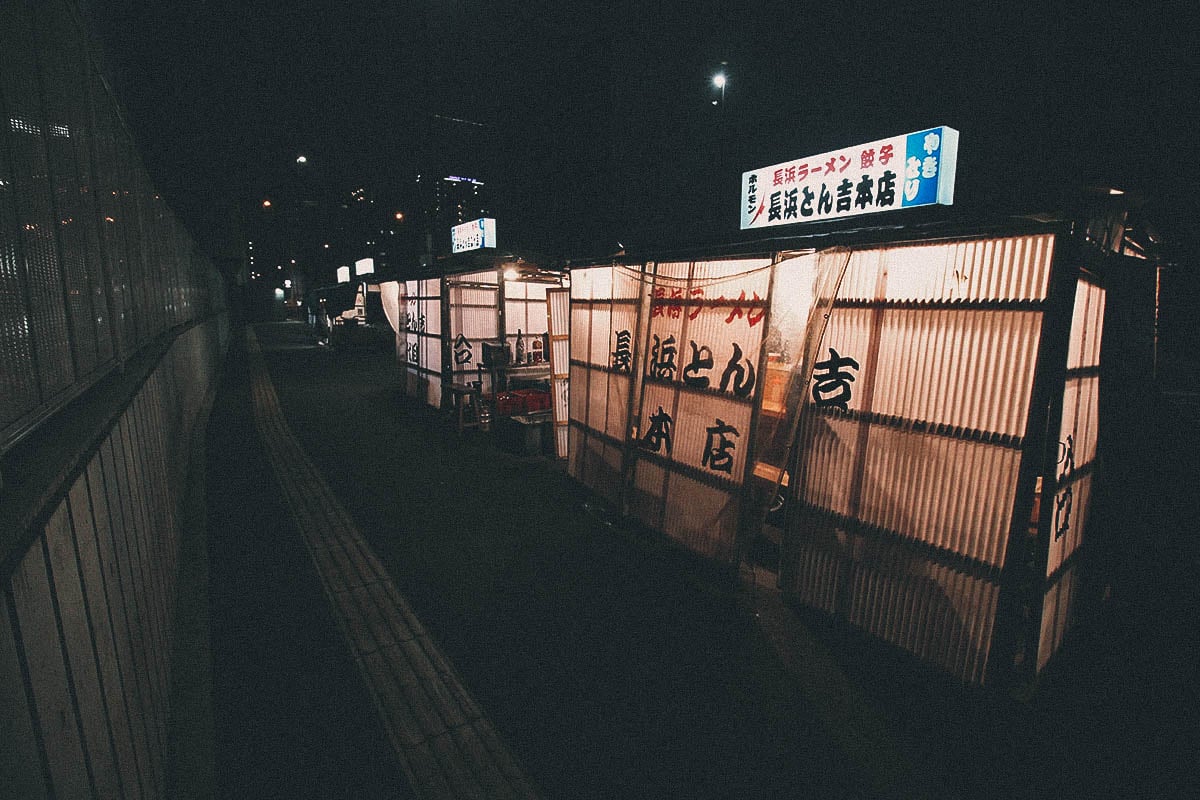 Yatai stalls are tiny, with a capacity to seat just 8-10 people. They offer simple dishes like yakitori, hot pot, and Hakata ramen. Many serve beer so they’re a great place to get drinks and a late night snack. There’s the yatai owner on the right peeking from behind the counter. 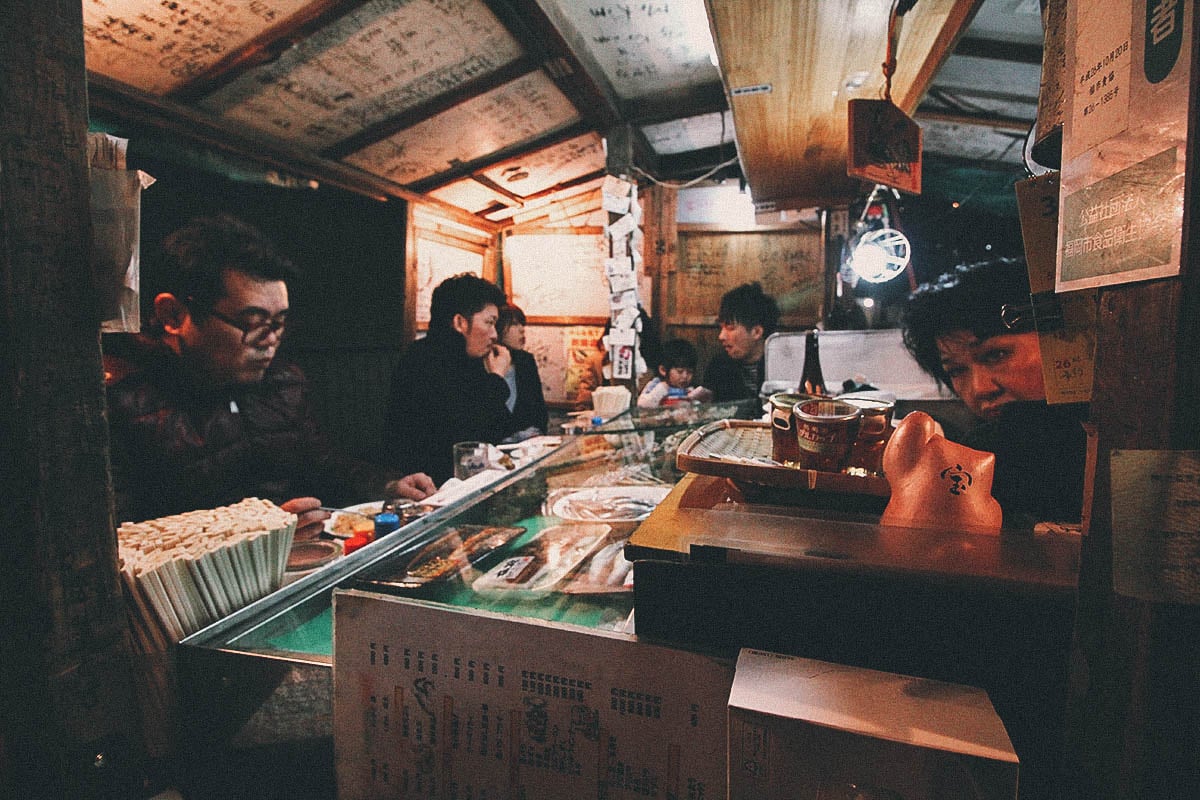 This is the cooking area behind the counter. I guess this is where they make the ramen and hot pot? The yakitori is grilled outside. 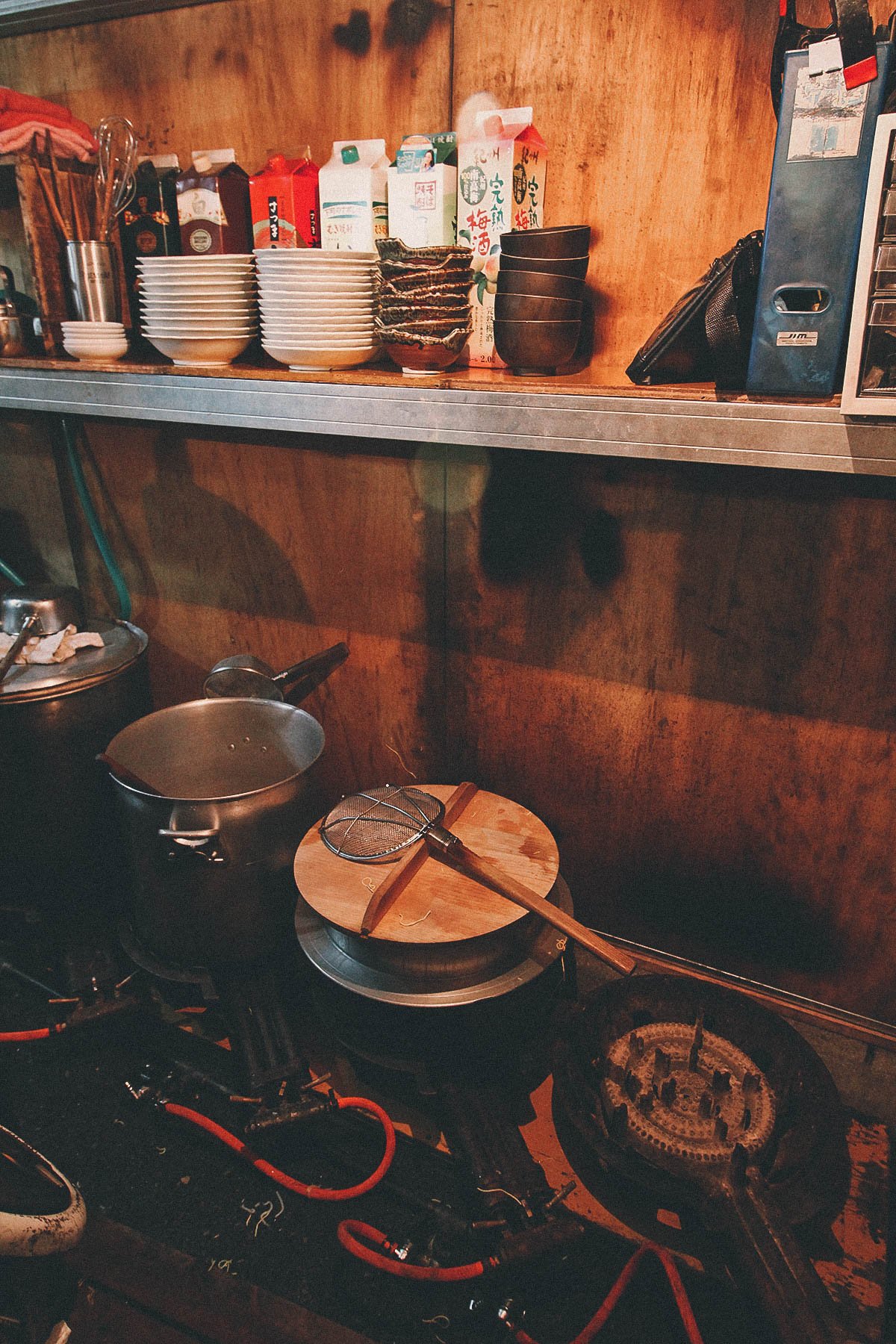 It seems customary to sign the insides of the yatai. It’s a fun casual atmosphere that invites interaction with the locals. 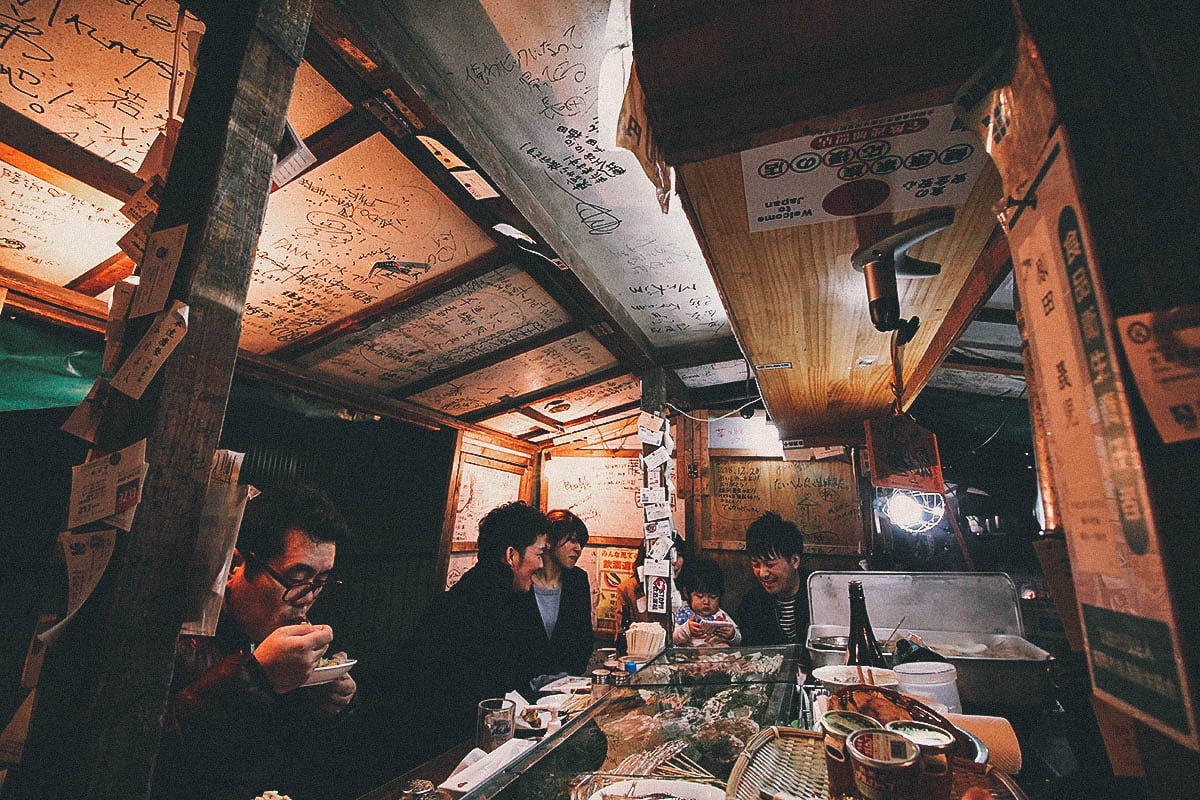 If I remember correctly, the couple sitting next to Ren was on vacation here from Yokohama. The group on the far right was busy writing “we were here” or something along those lines on the walls of the yatai. In quarters this tight, you have little choice but to chat and enjoy each other’s company, which we did in spite of the language barrier. 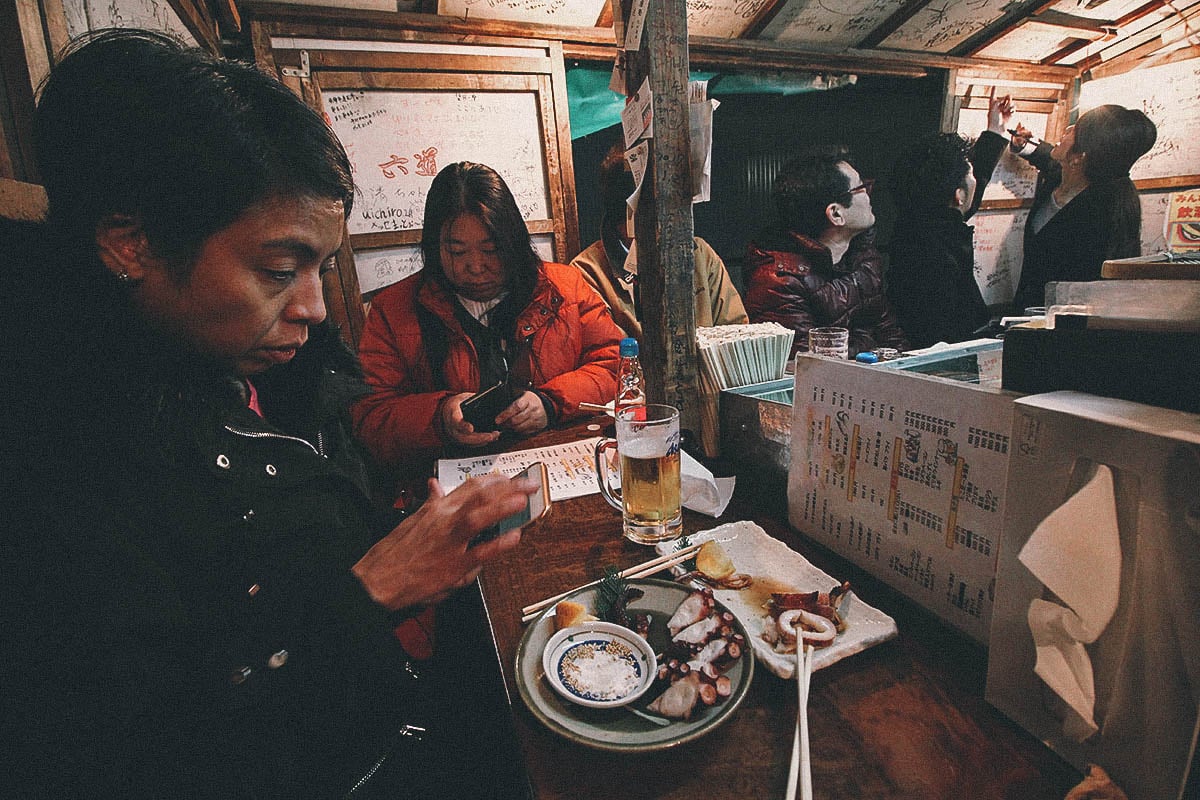 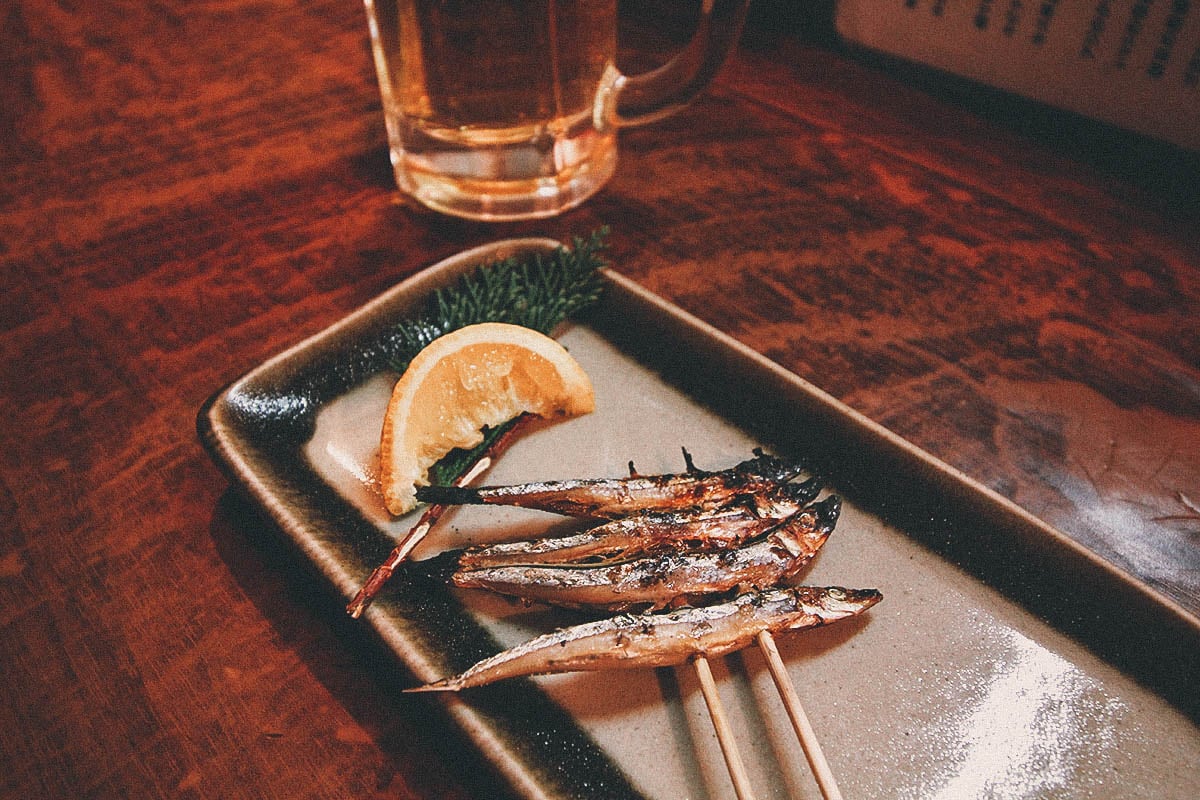 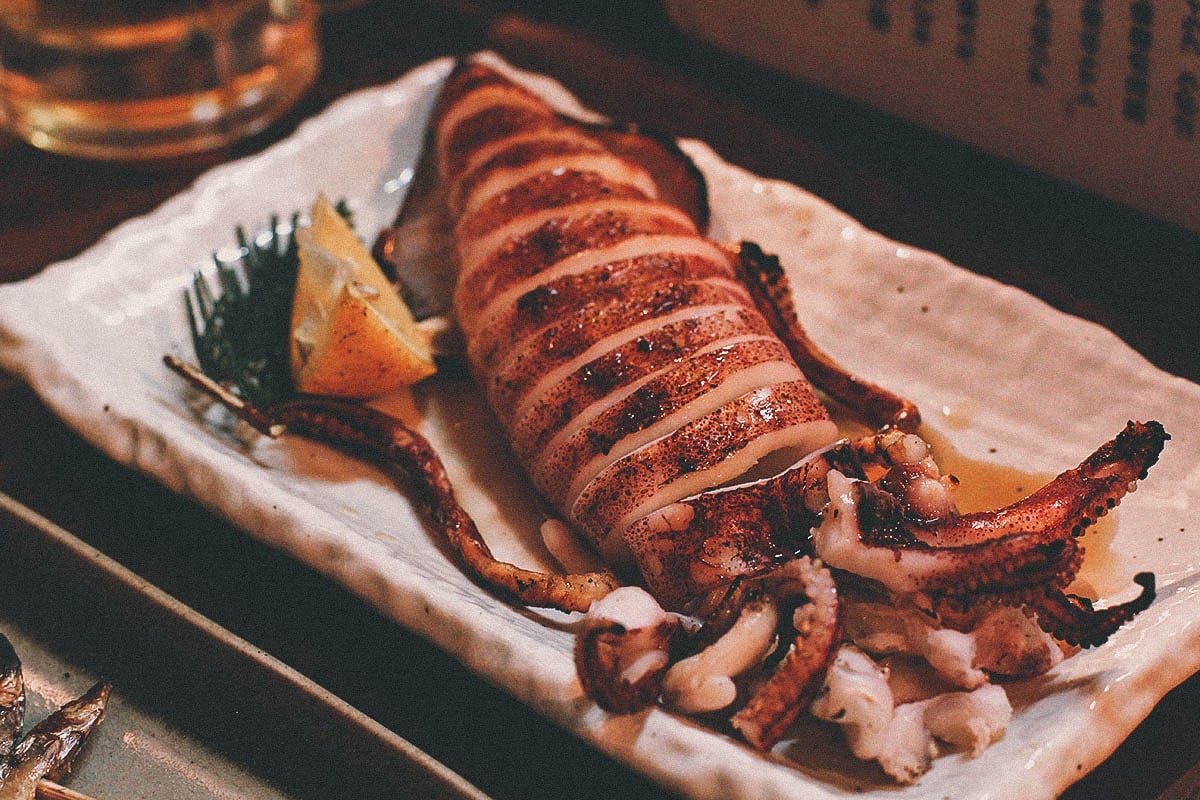 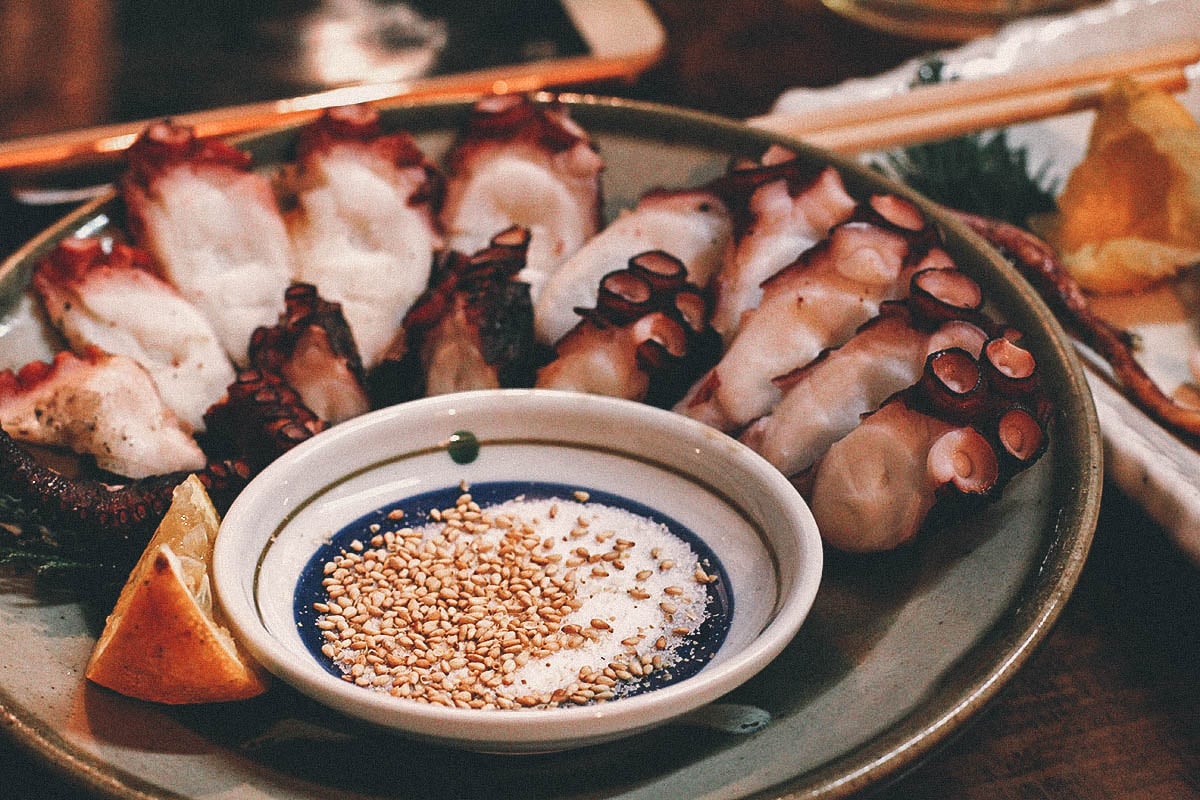 In this picture you get a better sense of just how small these yatai stalls are. They’re no taller than the average person! They look so much bigger from the inside don’t they? 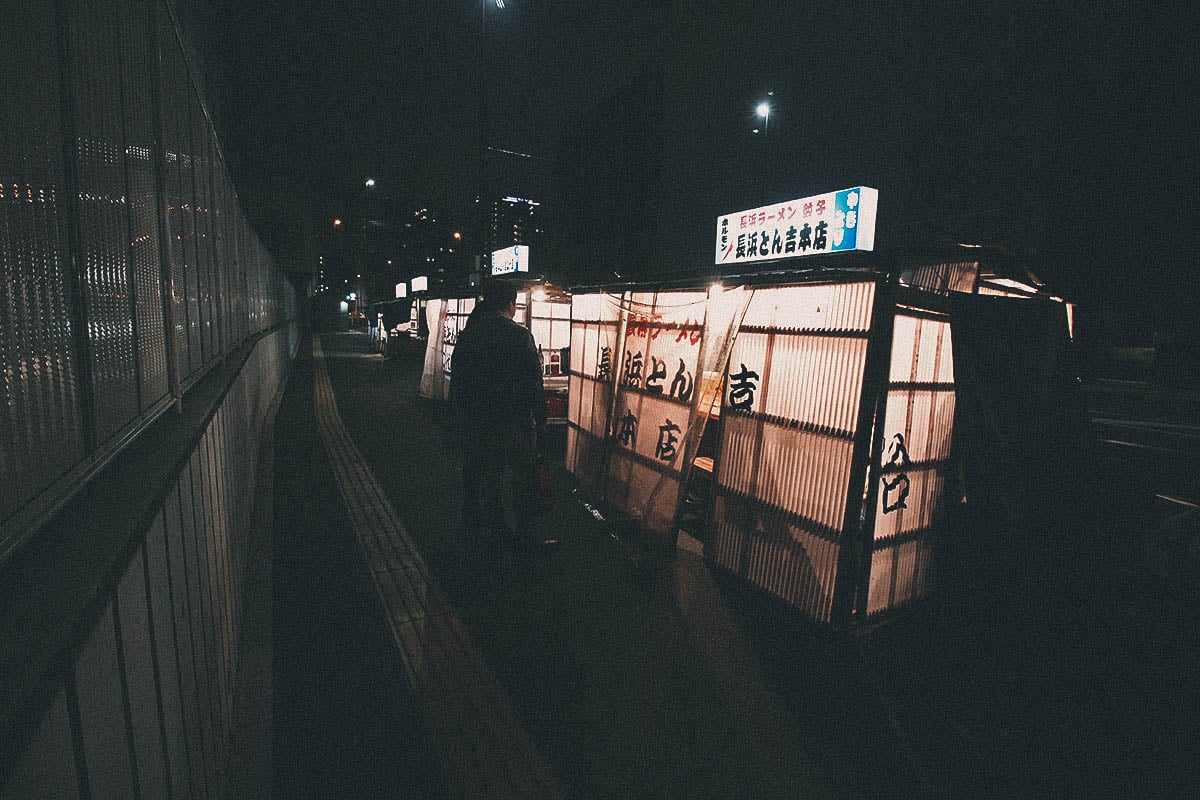 As described, yatai stalls are a beloved symbol of Fukuoka so it’s a good idea to have at least one meal here next time you’re in the city. They typically open at 6PM and close around 2AM. Many are closed one day of the week which I read is usually on a Sunday, but this varies from stall to stall. In fact, it was on a Sunday night when we ate at this yatai in Nagahama. Most in the area were open.

Word of advice, don’t expect prices to be cheap. We paid JPY 4,800 for two sticks of smelt, a whole squid, octopus, and two draft beers. Granted what we had was all seafood, we were still surprised by the bill considering this is basically just Japanese street food. We paid less than that at some restaurants! The big bowls of ramen we had at Ganso Nagahamaya for example, cost just JPY 500 apiece.

It wasn’t until after our trip that we learned why. An expat in Fukuoka described in a forum how the Japanese food at yatai stalls is generally 1.5-2X more expensive than many restaurants. As it turns out, yatai stalls have a reputation for overcharging customers. My Japanese friends confirmed this.

They said that prices do seem higher to begin with and some don’t even have menus at all. Many people, including the Japanese, have complained about feeling ripped off after eating at a yatai. In my estimation, we were overcharged JPY 1,000-1,500 for what we had.

With that said, we did enjoy the experience. The food wasn’t anything exceptional but the people were friendly and the atmosphere was fun. I usually don’t like crowded places but it was amusing to be squeezed into a tight space like that over beers and sticks of yakitori.

The idealist in me would like to think that not all yatai owners are bad, so if you want to experience it anyway, then try looking for one that has a menu with prices clearly displayed. Be sure to add things up in your head as you order so you have an idea how much your bill should be. In spite of their reputation, these yatai stalls are an important part of Fukuoka culture so it would be a shame not to experience them at all.

Nagahama has a few stalls but the biggest cluster is in the Nakasu area. There are about twenty yatai lined up along the river so I suggest going there. If you’re wary of being overcharged, then you can just walk around and enjoy the atmosphere.

For more information, you can check this article on Fukuoka’s yatai stalls. At the bottom of the page are directions to the Nakasu area along with a map pinpointing the location of all three major yatai areas.