Samurais are cool. Ninjas are even cooler.

Like many boys, ninjas and samurais played a significant role in my childhood. Swordfights, ninja stars, all that “sneakiness”, what wasn’t to like? And that costume. Black and badass, that was just the coolest thing ever. I was into G.I. Joe back then and like most kids, Snake Eyes was by far my favorite character.

Before video games came along and zapped me of my imagination, I remember how I used to lay down on the floor, on my side, close to the wall with my hands and feet against the baseboard. Making as little noise as possible, I’d slide up and down our hallway pretending to be a ninja scaling some impenetrable fortress. Or was I Spider Man? Either way, I was pretty stealthy.

Now forty years old, I may be a few decades removed from those stealthy floor buffing days, but today at Toei Kyoto Studio Park, I got to be a ninja all over again.

It may look modern from the outside, but as soon as you pay the ¥2,400 entrance fee and walk through those front doors… 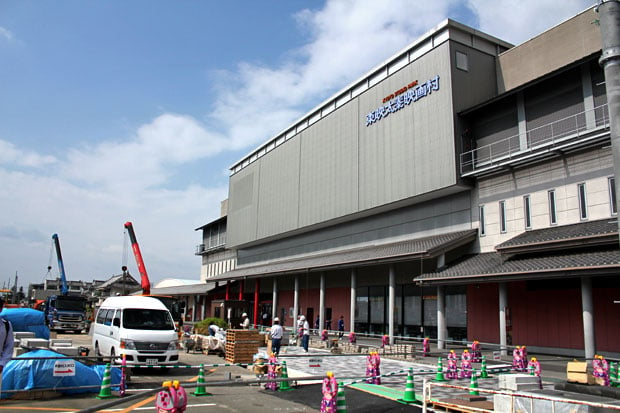 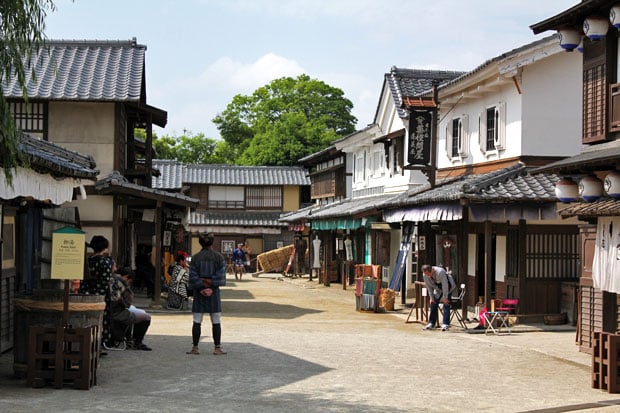 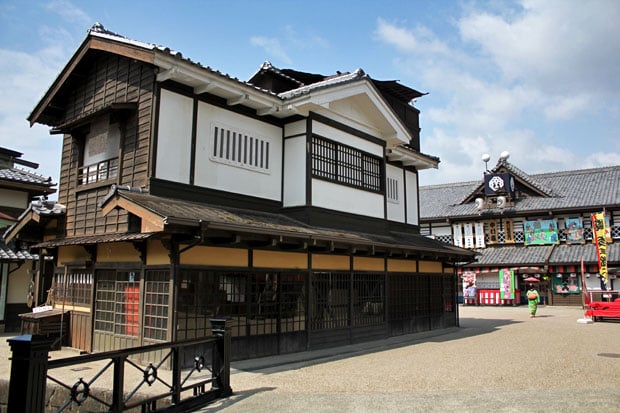 My friend Tom challenging two park attendants dressed as samurais to a duel…or is he just asking them for directions?

We didn’t do it but I believe guests can rent period-style costumes at Toei Kyoto Studio Park.  That would be awesome walking around all day as a ninja or samurai.  I may never want to leave! 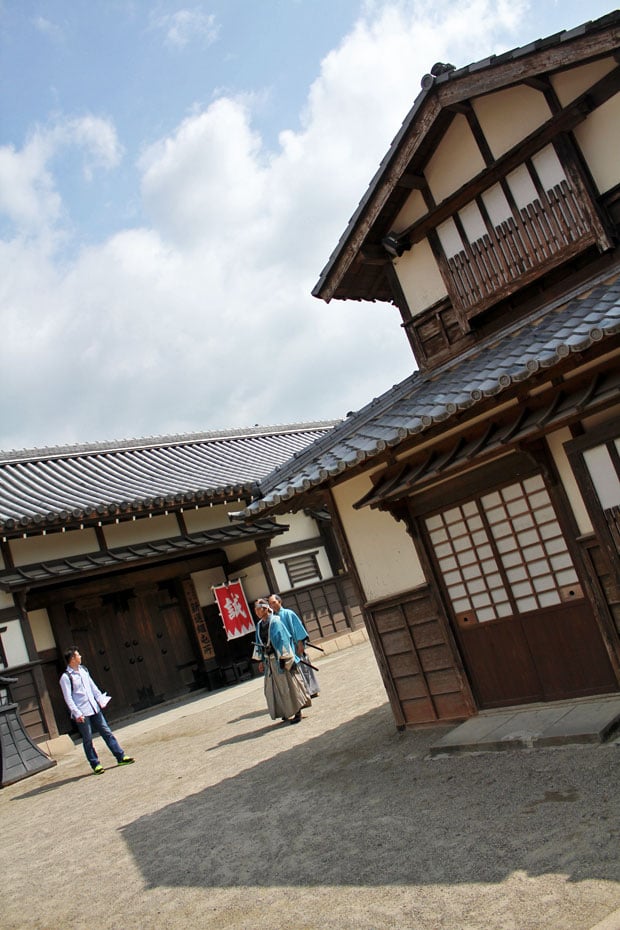 Not sure which buildings they were but there are supposed to be replicas of the Yoshiwara red light district and a traditional court house at Toei Kyoto Studio Park. 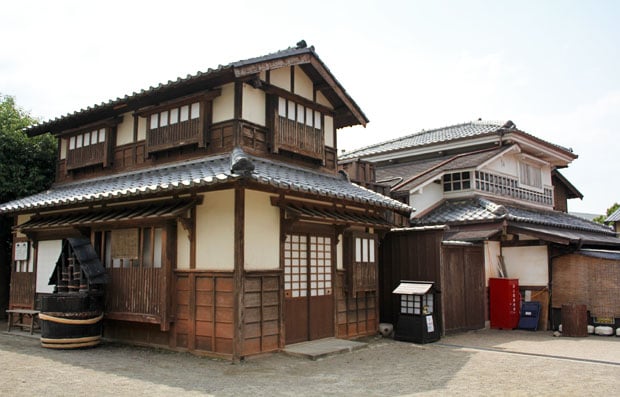 If I’m not mistaken, that box is called a ryūdosui, which is a type of wooden pump used to put out fires. 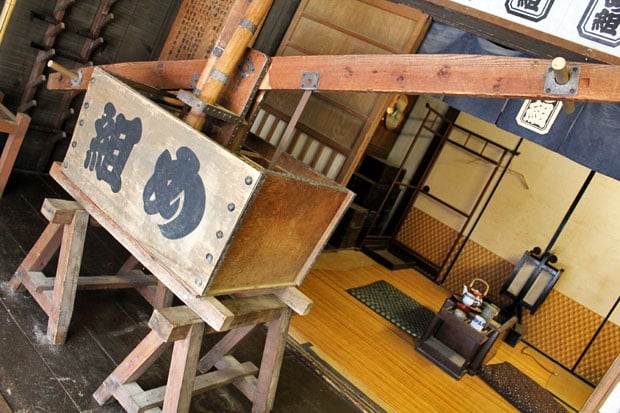 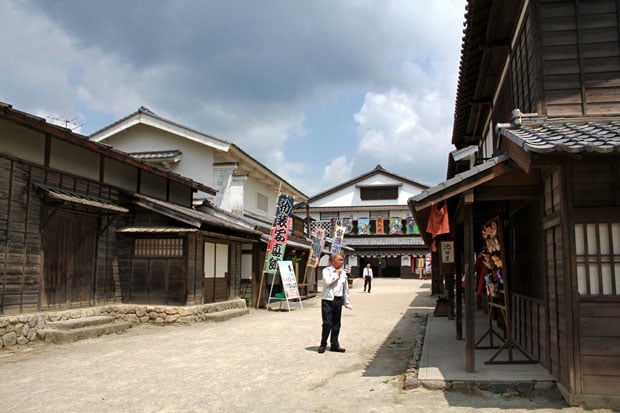 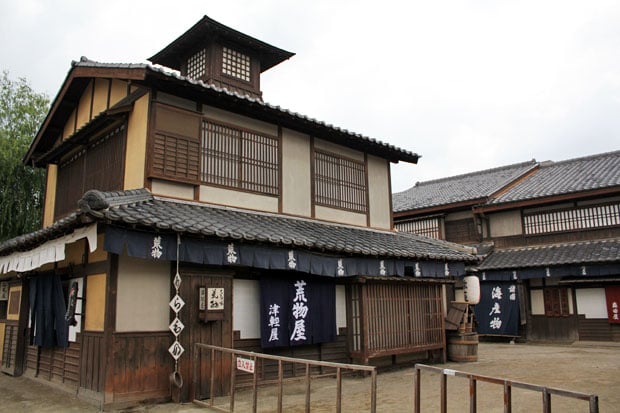 As mentioned up top, Toei is an active film studio and we were lucky enough to witness a program being shot there that day. 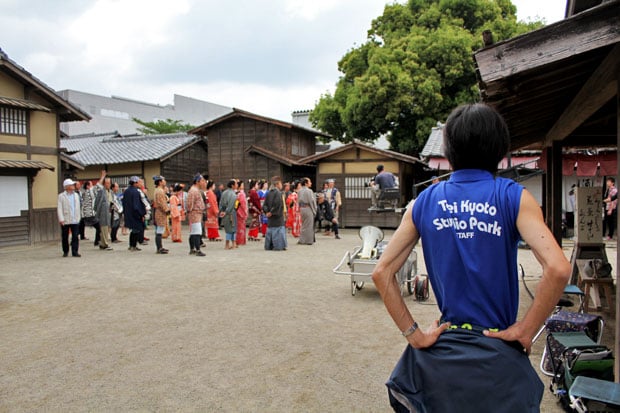 To Tom’s surprise, in the middle of that group was a very famous Japanese actor named Kōtarō Satomi. If I remember correctly, that’s him in the grey kimono. 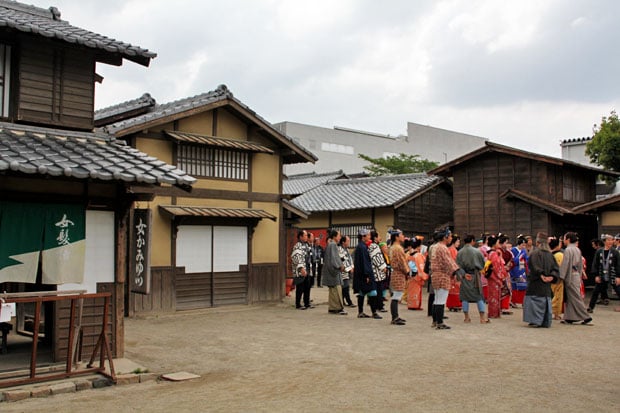 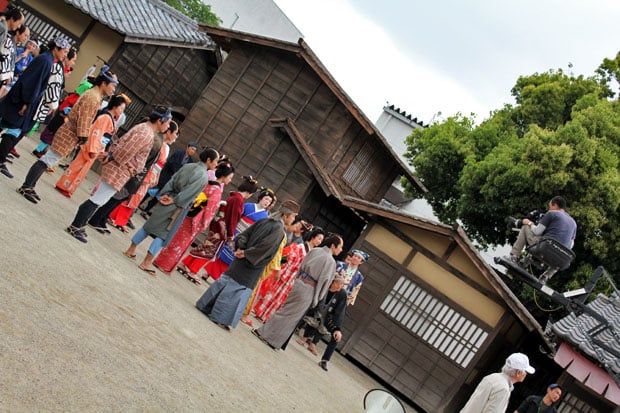 This was fun and my favorite attraction at the park. For an additional ¥600, you can explore this house and learn about the stealthy ways of the ninja. An unguided walking tour that starts with a short briefing conducted by (you guess it) ninjas, you have to make your way through the house room by room by uncovering the secret passageways. Many of the passages are cleverly hidden with lots of decoys and traps to throw you off. Unfortunately, they don’t allow you to take any pictures inside. 🙁 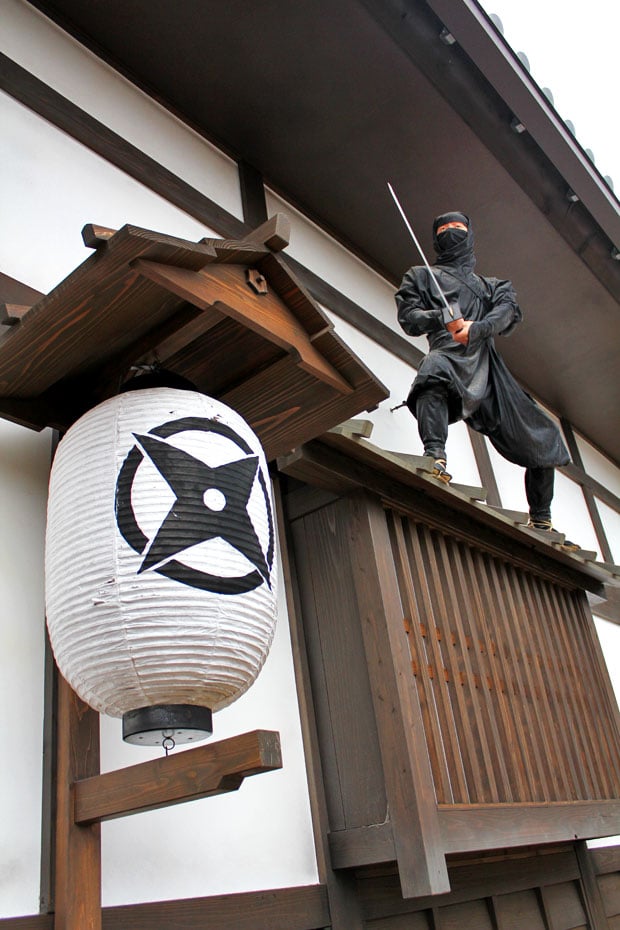 Ren learning the ways of the ninja whilst trying very hard to keep her balance and a straight face. 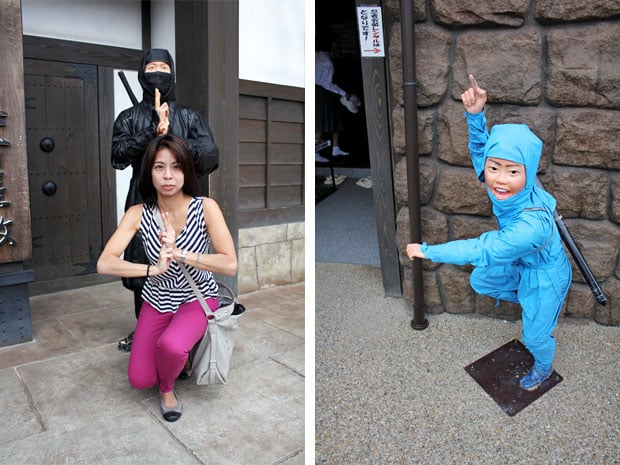 Sneaky mechanical ninja going back and forth on those wires 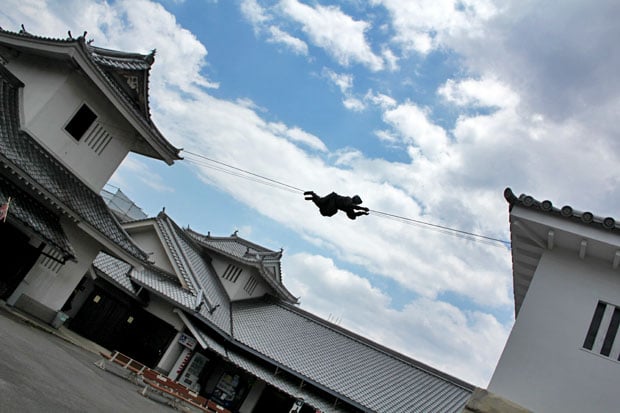 This was fun too. Like the ninja mystery house, you have to find your way through the house by going from room to room filled with these optical illusions. Here they allow you to take pictures. 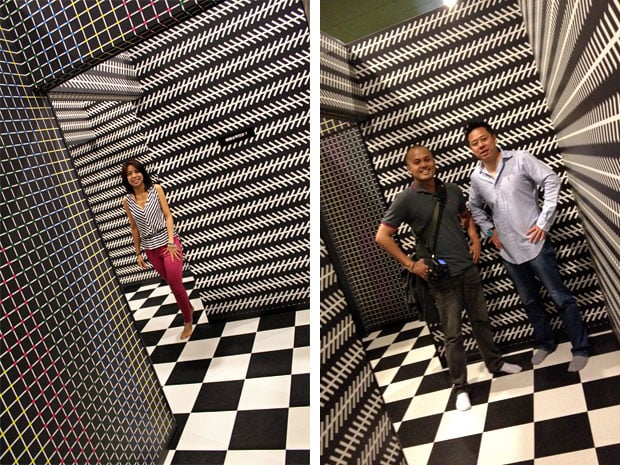 Like being on the set of Enter the Dragon 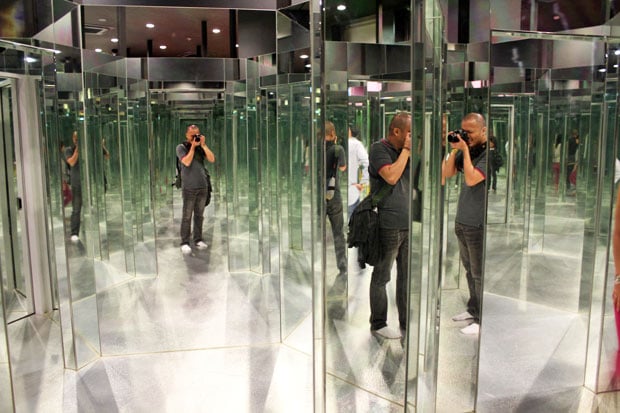 Some of the rooms and passages here are dizzying! 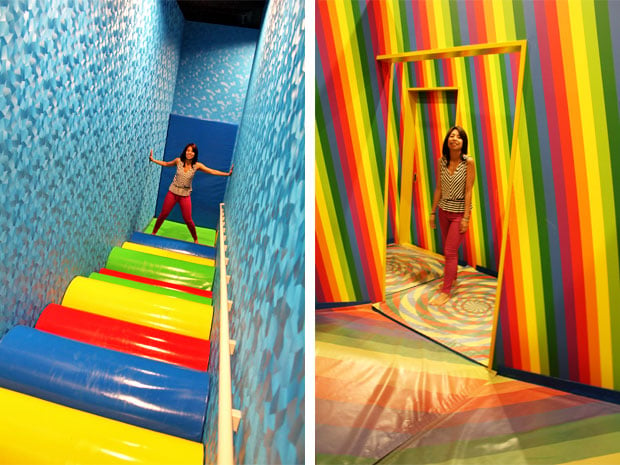 After reading about this haunted house in a blog, this was one of the main reasons why I wanted to come to Toei Kyoto Studio Park. Like the ninja mystery house and optical illusion maze, this is an unguided walking tour where you have to make your way through the house one room at a time. I wasn’t too scared at first, but as soon as the lights went out and the door into the haunted house slid open, I was terrified.

I don’t want to give too much away, but if you’ve seen many Japanese horror films, then you know this is gonna be good. No pictures are allowed inside, and they expressly tell you NOT to punch nor kick any of the actors. 😆

*Tom told me that the sign above says “Scariest haunted house ever!” 😯 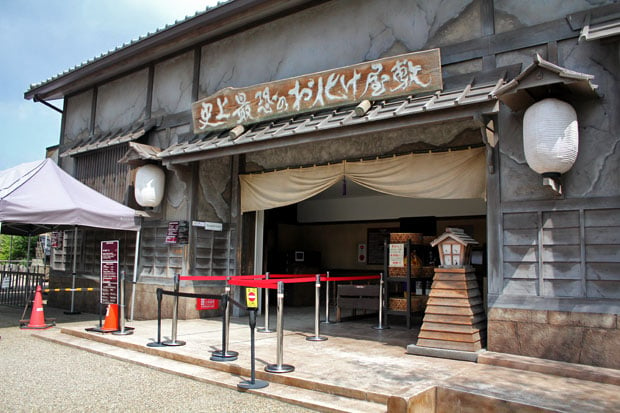 We didn’t have time to check it out but there’s an anime museum here as well featuring original pictures, animation cells, and life-sized statues from some of Toei’s classic productions like Hustle Punch, Dragon Ball, and Sailor Moon. Anime fans would have a ball here. 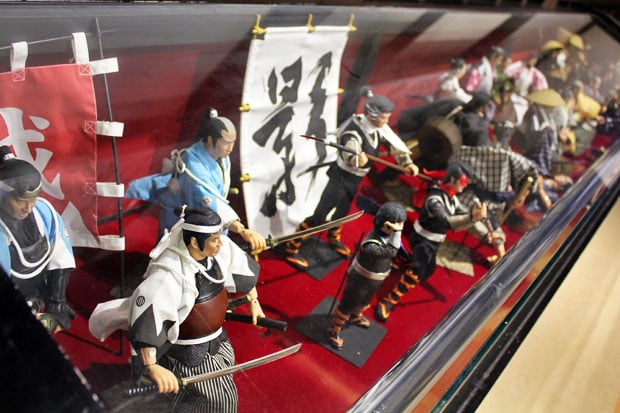 If you like samurais, ninjas, anime, or Japanese kitsch in general, then you’ll have fun at Toei Kyoto Studio Park. Be prepared to allocate at least a couple of hours here to give you enough time to go through the park’s attractions.

Though not pictured above, we went to a behind-the-scenes show as well that demonstrated the various tricks of the jidaigeki filmmaking trade. There’s also a theater with very popular live ninja shows. It’s entirely in Japanese, but you can kinda follow what’s going on. Emphasis on “kinda.” 😆

HOW TO GET THERE:
Take bus number 75 from Kyoto Station to the Uzumasa Eigamura-michi bus stop. CLICK HERE for more information.

I hope you can still see this comment. We are planning to go here as a side trip on our last day before going to KIX airport for our flight back to manila. Any suggestions on where we can leave our luggages since we plan to check out first in our hotel then go here in the morning? Thank you!

Hi Stacy Ann, there are coin lockers at Kyoto Station. Check out THIS POST for more information. Hope that helps!

Hallo.... Thank you for the writting, next month I planned to go there .... & Do you know the price for make up & costume like geisha? I heard that Toei provided make up artist & kimono rent

Hi Intan, I'm sorry but we didn't do that so I don't know the price. They do offer that though if I remember correctly.

My request: May I have the original high-resolution file of the photo "Ninja on the roof with a sword" taken at Kyoto Ninja House?

Hi Jeyhun, what do you intend to use it for?

Hi! Chanced upon your website while I was looking for Haunted House. Unfortunately, I was too chicken to enter that, and my sis doesn't want to go in either.

However, one exhibit we went to was the Kamen Rider, Super Sentai display. Featuring our (or at least my generation's) heroes Bioman, Maskman, Shaider, Mask Rider Black.

I think this was opened recently as it is not even in its website. One tip for your readers who are planning on going is to visit on a Sunday as they have a live action show of the Super Sentai.

Great blog! Keep it up!

Thanks for the tip about Super Sentai Kendrick! That's good to know. :)

Thanks Cicha! Yes, some of the attractions like the Haunted House and Ninja House have additional fees on top of the entrance fee to the park. Most of the park though you can explore at no extra cost. Have a great time! :)