Moscow by Foot, All for the Love of a Big Mac 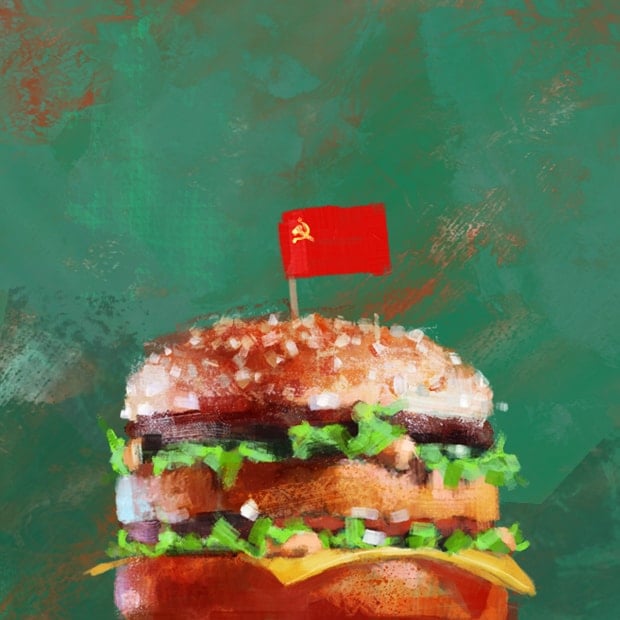 NOTICE: Your health and safety come first. Please adhere to the WHO recommendations and avoid any non-essential travel at this time. If travel is unavoidable for you, then you can check the Flatten the Curve website for information on global travel restrictions.
DISCLOSURE: Some of our articles may contain affiliate links and sponsored brand mentions. Any affiliate partnerships or sponsorships are disclosed at the bottom of the article.
DISCLAIMER: You are reading the information on this website at your own free will and any reliance you place on said information is strictly at your own risk. You can refer to this website's terms of use for more information.

This story took place over 20 years ago.

I was a sophomore in high school and we were in Russia on a school trip. It was 1990, and the Russia back then was very different from the Russia of today. It was still a communist state.

On our way to Moscow by train, we had just spent three days eating horrible food in Leningrad. I can still remember the breakfasts. The coffee had solid, chewable sheets of curdled milk, and the bread was hard and crunchy, like glass. Excited to get to Moscow, we heard that Russia’s first McDonald’s opened up there a couple of months before. Being westernized teenagers, we needed our junk food.

Arriving in Moscow, our teacher/chaperone Mr. Lavalee told us that we were free for the whole afternoon. Our rooms weren’t ready yet, so two friends and I quickly dumped our luggage at the front desk and hopped in a taxi to go to McDonald’s. On the way there, Ryan asked:

“What’s the name of our hotel?”

I was sitting in the front seat and I remember looking back, searching their faces for an answer. They were doing the same. It never came.

Too excited for McDonald’s to even write our hotel’s name down, all we could remember was that it started with the letter “S”. That was it.

If we were smart, we would have told the driver to turn around and bring us back to where he picked us up. But no. We were so eager for burgers that we said screw it, we’ll figure it out later. After waiting an eternity in that mile-long queue, we stuffed our faces silly with burgers and fries. After three days of that glassy bread in Leningrad, my Big Mac tasted like the absolute best thing in the world. It was.

Satisfied, we now had to find our way back to the hotel that started with the letter “S”. Among the three of us, only Ryan had any memory of our taxi’s route.

“I remember seeing that poster! Let’s go that way.”

Vague as that might have been, Ozzy and I had no idea where we came from so we had little choice but to follow him.

I don’t remember anymore how long we were walking for, but it was long, maybe around 2-3 hours. It was March and the weather was still very cold. There was slush all over the roads and I recall walking at one point on an island that divided a major street. It wasn’t pleasant.

Tired and losing faith in Ryan, we decided to hail a taxi. The driver spoke little English so we just pointed down the road and said:

He understood, dropping us off a few minutes later at a hotel that did start with the letter “S”. Unfortunately, it wasn’t ours – Sports Hotel.

Resigned, we went in anyway and asked the hotel manager for help. Luckily, she was kind and spoke good English. She took us into her office and proceeded to call all the hotels in the phone book that started with the letter “S”. She was speaking in Russian so the only word I could understand was “Americansa” (or something like that). Obviously, it was in reference to the three idiot kids sitting in her office.

When it seemed like she wasn’t getting anywhere, Ryan tried to help by pointing both hands to the right and saying:

“The hotel kinda faces the street at an angle.”

Ozzy and I looked at him and were like: “Are you effing serious dude?” We chided him for even saying it, but as Ryan quickly pointed out, it was more than what we could offer. He was right.

The manager patiently called hotel after hotel but got nothing. Did it really start with the letter “S”? Beginning to doubt even that, we were losing faith when the manager finally hung up the phone after calling at least 20 hotels. She then wrote this single word down on a piece of paper. At the time, it was the most reassuring word I had ever read.

Thanking the manager profusely, we grabbed a taxi back to our hotel. You’d think this was the perfect ending to a frightening ordeal, but it wasn’t. At least not for me.

As described earlier, it was the tail end of winter in Russia so we were all wearing heavy clothing. I had on a black wool trenchoat, and in its inner leftside breast pocket was where I kept my passport.

Apparently, it had fallen out sometime during the day, most likely when we were out lost in the city.

Now anyone with half a brain would have been worried to death about this. But I wasn’t. At least not as much as I should have been. I remember being bummed about it, but I was just too young and too stupid at the time to fully understand the gravity of the situation.

Frightening scenario right? Luckily for me, it didn’t end that way.

The next morning, a girl from the school we were traveling with knocked on my door, holding my passport. She found it in their room. Apparently, it slid out of my pocket when I threw my coat onto the bed, relieved as I was to get back to our hotel.

My ordeal was finally over.

It’s been 24 years since that day, but I haven’t forgotten it. And I don’t think I ever will. Wiser than I was back then, I understand now just how truly lucky I was.

Still the most reassuring word that I’ve ever read in my life.

0shares
Shinsaibashi & Dotonbori: Shop & Eat Your Way through the Heart (and Stomach) of Osaka
← Previous
A Scorpion, a Spliff, and a Swiss Army Knife at Chitwan National Park, Nepal
Next →
Click here to cancel reply.

It was Jim! Though in hindsight, I should have been way more worried than I was. Being a kid, I just didn't understand how serious the situation was at the time. I'm grateful that everything worked out in the end.

Thanks for stopping by! I love your blog. :)