A Scorpion, a Spliff, and a Swiss Army Knife at Chitwan National Park, Nepal 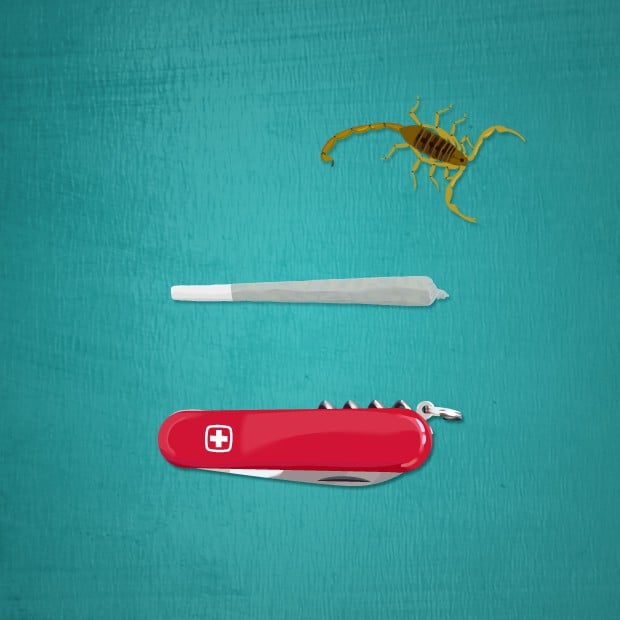 NOTICE: Your health and safety come first. Please adhere to the WHO recommendations and avoid any non-essential travel at this time. If travel is unavoidable for you, then you can check the Flatten the Curve website for information on global travel restrictions.
DISCLOSURE: Some of our articles may contain affiliate links and sponsored brand mentions. Any affiliate partnerships or sponsorships are disclosed at the bottom of the article.
DISCLAIMER: You are reading the information on this website at your own free will and any reliance you place on said information is strictly at your own risk. You can refer to this website's terms of use for more information.

I was traveling alone in Nepal in 1997 and one of my stops was the Royal Chitwan National Park. Located around two days south of Kathmandu, it’s a wildlife reserve that’s home to many large mammals like elephants, rhinos, sloth bears, and Bengal tigers.

I remember going on three animal encounter trips when I was there. The first was in a jeep with other travelers, the second on the back of an elephant, and the third on foot with my guide Sarot. With the potential of coming face to face with wild animals, the jungle walk was the most thrilling.

Before entering the Jungle, Sarot briefed me on what to do and what not to do should we encounter any dangerous animals.

He said that if an elephant charges, climb a tree and stay quiet.

Same with a rhino. If the tree is too thin to climb, then keep your back against the trunk and shimmy left and right as it tries to come around and gore you. (I laughed when Sarot demonstrated this.)

If you’re unlucky enough to be trapped in an open plain, then run like hell in a zigzag motion while stripping off all your clothes. Rhinos are faster than humans but can’t turn as quickly. They also have an acute sense of smell but poor eyesight. Hopefully, they’ll stop and gore your shirt or shorts, giving you enough time to escape.

If you see a sloth bear, don’t run because it’ll attack your companion (in this case, Sarot). Instead, stand your ground, hold your walking stick like a spear, and make as much noise as possible while slowly backing away.

If you run into a tiger, then you’re basically fucked. There’s nothing you can do.

Luckily for us, we didn’t run into any tigers, but we did see a bear through the trees around 20-30 feet away. It wasn’t exactly the face to face encounter that Sarot warned me about, but it was still unnerving, and cool.

Later that night, I celebrated the bear sighting by smoking a joint in my room. I was sitting on my bed with my bare feet on the ground, when I saw something scurrying on the floor from the corner of my eye.

It was a scorpion.

“What the fuck?” I had never seen a live scorpion before in my life, and here it was scurrying out from underneath my bed, just a few inches from my exposed foot. What else could be lurking around in this room?

Thanks to my marijuana-induced Zen state, I didn’t freak out. I just calmly grabbed my slipper and smashed it. I remember it being crunchy, like a cockroach.

At this point, my joint had burnt down almost to the nub so it was getting pretty hot and hard to hold. I didn’t want to put it out just yet so I looked around for something that I could use as a roach clip (tool to hold a joint when it gets too small and hot). Spotting my Swiss army knife on the bedside table, I thought that the scissors would make the perfect tool.

Now I don’t know if it’s because I was high, still in shock from the scorpion, or just plain stupid, but I didn’t even think of putting the roach down before pulling out the scissors. Instead, I held on to the joint with my left hand, while I took the Swiss army knife in my right and tried to pull the scissors out with my teeth.

Getting it almost halfway out, it slipped and started going back into the knife, but not before catching my lower lip between the scissor’s blades.

Anyone who’s ever pulled anything out of a Swiss army knife knows that it takes some force to yank out the tools. Now imagine that same force pulling the scissors back into the knife with the soft flesh of my lip caught in its blades. Ouch.

Jolted by the intense pain, my initial reaction was to yank it off. But I couldn’t do that because doing so would have taken half my lip with it. I was stoned so problem solving wasn’t my strongest suit at that moment.

Tossing the roach, I ran into the bathroom with the Swiss army knife dangling from my lip. I needed a mirror so I could pry it off as gently as possible without injuring myself any further. Carefully wedging my finger between the scissors and knife body, I pried it open just enough to free my lip.

Thankfully, it didn’t take any of my lip with it, but blood did start gushing out like water from a dam. I had never cut my lip that badly before so I had no idea how much blood there would be. There was a lot, and it was spurting everywhere. On my chest, on the floor, all over the sink. Nasty.

When I finally got the bleeding to stop, I was left with a perfectly shaped, sideways “V” mark on my lower lip. It looked like a “greater than” symbol, something like this:

A strange scar, but oddly, cool.

The adrenalin pretty much killed my buzz so I smoked another joint to relax. This time, I used both hands to get those damn scissors out. And just as I suspected, they made a great roach clip.

The next day, I had to explain to Sarot how I got the funny shaped scar on my lip. I told him that I fell into the sharp end of my walking stick while going to the bathroom during the night. Why I would need it to go to the bathroom, I have no idea. But to support my story, I wrapped the offending end of the stick with bandage tape to smoothen it out so it “doesn’t happen again.”

He seemed to buy it.

0shares
Moscow by Foot, All for the Love of a Big Mac
← Previous
Sunday Brunch at Whole Pet Kitchen, the Country's First Pet Deli & Bark-ery!
Next →
Click here to cancel reply.