Our next big trip isn’t until late October, so like any obsessed wanderluster, I find myself virtually glued to travel websites these days. I’m hoping to squeeze something in between now and then, because three months between trips is like an eternity in travel blogger years.

I was recently turned on to Traveloka Malaysia and their MAS online promotion flight finder. Ren and I have been meaning to do a comprehensive Malaysian food guide, so I’ve been making dummy bookings to different cities in Malaysia, hoping to find irresistibly cheap flights.

Going through their list of Malaysian destinations, I see Langkawi, which coincidentally was the last time we flew on Malaysia Airlines. We visited that archipelago in 2014 after reading an article listing it as one of the best islands in the world. I’m a sentimental guy so seeing that name brought back a flood of fond travel memories. There was one experience in particular that neither Ren nor I will ever forget.

We had booked an evening jungle trek that would take us on a guided tour through the rainforest behind the Berjaya Hotel. There were 10 of us in the group. Aside from Ren and myself, there was a young Chinese couple from Hong Kong, an older Indian couple, a pair of German newlyweds, a solo Dutch traveler, and our Malaysian guide Jerome.

Before entering the rainforest, Jerome gave us a quick briefing on what to expect. He warned us about the slippery jagged rocks and the needle-like spines on the underside of leaves. He told us to watch out for mosquitos, leeches, and black termites. The black termites sounded particularly ominous. He told us to spray mosquito repellant on our shoes to keep them from crawling up our legs. Yikes!

As if that didn’t make us nervous enough, he then tells us a story about a European couple who had entered this same rainforest unguided just a few months before. Wearing little more than singlets, shorts, and flip-flops, they went in shortly after sunset carrying just a small bottle of mineral water between them. They climbed all the way to the top and snapped a few selfies, presumably to post on Instagram. #blessed

But before they could climb all the way down, night had already fallen. In the pitch black of night, down looked up, and up looked down. Going around in circles, they became hopelessly lost and couldn’t find their way out of the jungle.

Luckily, they had rented a motorbike to get there, its contract expiring in 24 hours. When they failed to bring it back, the operator looked for the motorbike and found it at the base of the rainforest where the couple had left it. A search party was sent into the jungle and they were rescued over 48 hours after they first went in. Weak and dehydrated, their exposed skin was covered in leeches.

“Stay close to me, and DO NOT wander off” was clearly the point of Jerome’s story. And with that, we entered the rainforest.

Now mind you, this wasn’t some tourist-friendly trail with cement paths and railings. On the contrary, there was hardly any trail at all. Like infants, we were completely dependent on Jerome as he guided us through Langkawi’s dense and potentially dangerous rainforest. 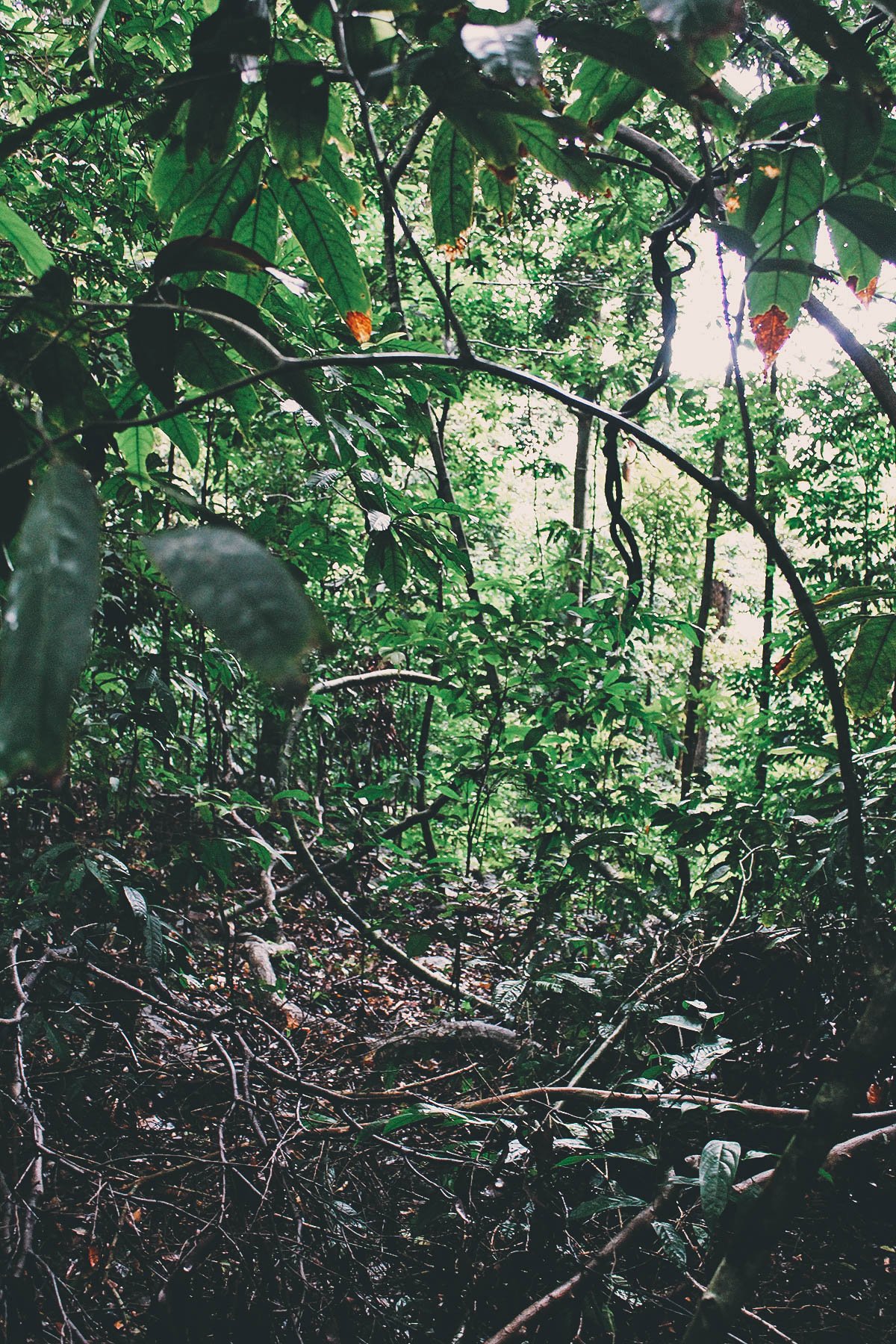 Within minutes of entering the jungle, the sole of my left sneaker became detached. It separated from the rest of my shoe and was dangling only by the front tip, kind of like the way two sheets of paper are held together by a single staple in the corner.

The glue had already started to come undone even before our trip so the sole must have been jarred loose by the rough terrain. Every time I took a step, the silicone gel sole would snap forward and back, making a *fap fap* slapping sound.

Worried as I was that the soft underbelly of my shoe wouldn’t hold up to the sharp rocks, it didn’t help that the Dutch tourist walking behind me started laughing when he saw my flapping sole.

“Your shoe! It’s…haha…it’s hahahaha!” He was laughing so hard he couldn’t even finish his sentence.

Before I could turn around and give him dagger looks, it started to rain. Hard.

Within minutes of feeling the first few drops, it was coming down on us in buckets. It felt like we were standing beneath a waterfall! Night had fallen so Jerome wisely decided to cut the tour short and head back to the Berjaya. Unfortunately, it was a long way from where we were.

Though my camera bag was water resistant, it wasn’t waterproof. Jerome didn’t have any ponchos for us so all I could do was pray that my USD 2,000+ in camera equipment would hold up.

By this time, the sole of my shoe had fallen off completely, leaving my left foot with no traction and barely any protection against the wet, jagged, slippery rocks. The situation was pretty bad at that point so I didn’t think they could get any worse, but they did.

In our rush to get the hell out of that jungle, the sole of my other shoe, my right shoe, decided to say I’m outta here too. It detached itself from my shoe, just like the other one. I couldn’t believe it.

Now this could have happened the day before while we were walking up the steps to Telaga Tujuh Waterfalls. It could have happened when we were bike riding earlier that morning. But no, as if to prove that Murphy’s Law did exist, my shoes had to disintegrate at the worst possible time.

At this point, looking at my camera bag sopping wet, and that ridiculous rubber sole dangling from the tip of my right shoe, all I could do was laugh. Resigned that my equipment was already ruined, I tore the right sole completely off and just focused on keeping my balance whilst crossing over logs, under lianas, and through ankle-deep pools of water steadily rising from the heavy rain.

Minutes later, we were out of that jungle looking like wet t-shirt contestants, but unharmed.

Seeking shelter, I nervously opened my bag expecting to find my DSLR marinating in rainwater. But to my surprise, my equipment didn’t suffer any damage. The inner lining of the bag was already wet, but the camera and lenses were still dry. It was nothing short of a miracle.

Had we been out for any longer, then there’s no doubt in my mind that all my gear, and the hundreds of pictures I had taken during our trip, would have been destroyed.

We walked back to the Berjaya a little earlier than planned, but happy and relieved. Our trek may have been cut short by the rain, but it turned out to be a night that we would never forget. Terrifying at that moment but remembered with much fondness the next, it’s the kind of fodder that all epic vacations are made of.

What about you? Have you ever experienced anything like this on your travels?

Here are the very shoes I was wearing that night. The soles are probably still in the rainforest. 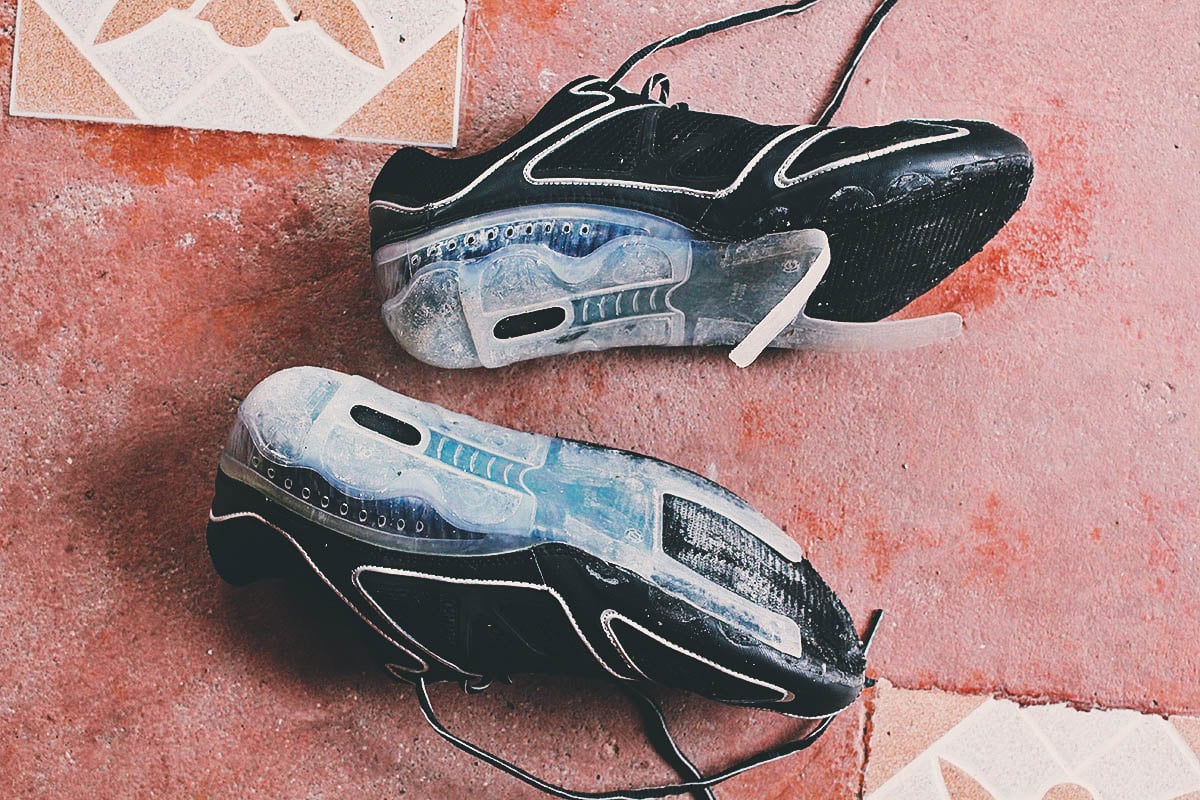