I was confused by this place at first. On the surface, it looks like any other park you’d find in a big city but it’s more than that.

I went on a blogger trip to Taichung in October 2017 and one of the places they took us to was Calligraphy Greenway. When I googled it before my trip, I thought we’d be visiting restaurants in the area because as pretty as the park looked, it didn’t seem to be anything more than a manicured lawn with trees on either side. But as it turns out, Calligraphy Greenway is like art central in Taichung. It’s a green urban space dedicated to arts and culture in the city.

If you like the arts and enjoy spending time at museums, then a day exploring Calligraphy Greenway is a must. Here’s what you can find there. 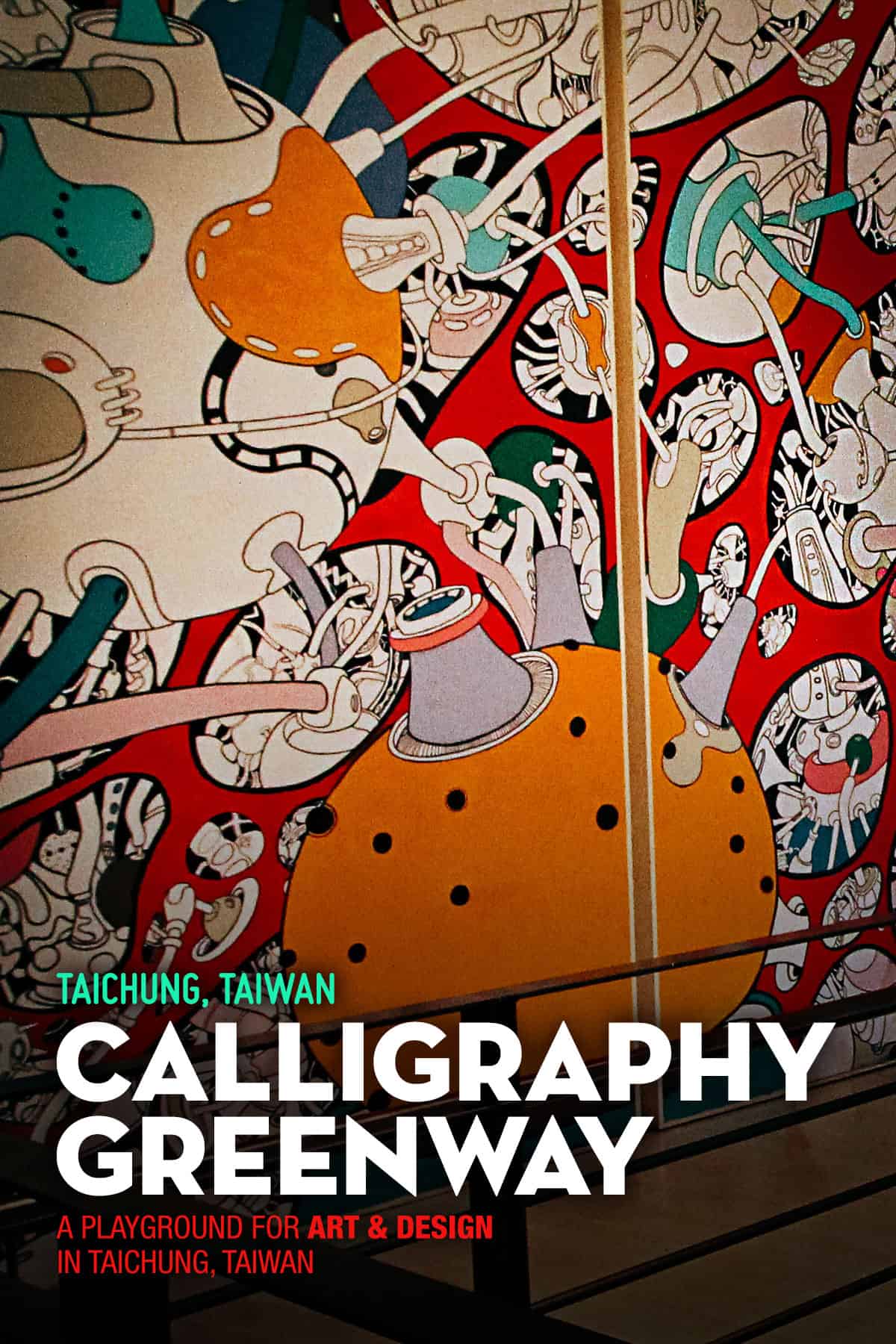 What is Calligraphy Greenway?

Calligraphy Greenway is a 3.6 kilometer long, 6.5 hectare green open space stretching from the National Museum of Natural Science in the north to the National Taiwan Museum of Fine Arts in the south. It’s a pleasant tree-lined area on either side of which is a plethora of shops, restaurants, and cafes.

Located in the heart of Taichung, Calligraphy Greenway is the arts and cultural center of the city. It’s a collective hub of creativity where you can enjoy exhibits and performances, visit museums, and explore artsy neighborhoods with pockets of interesting shops and boutiques.

How Do I Get to Calligraphy Greenway?

Calligraphy Greenway is located in central Taichung. There’s no metro system in Taichung so the easiest way to get there is by Uber or taxi. If you’d prefer to take the bus, then I suggest downloading the Google Maps app (iOS | Android). It’ll tell you how to get to Calligraphy Greenway from wherever you are. Once you get there, you can easily walk to all the places listed below.

Some of the places mentioned in this guide are a bit hard to find, so I’ve pinned them all on a location map to show you where they are in relation to one another. You can easily visit all these places in one day so to help you plan your itinerary, I’ve listed them below by location starting from south to north. I suggest starting from the southern end of Calligraphy Greenway and making your way up north.

Located at the southernmost end of Calligraphy Greenway is the National Taiwan Museum of Fine Arts. It’s a big museum with four floors of exhibit space to go through so you can easily spend a couple of hours here. Best of all, admission is free. 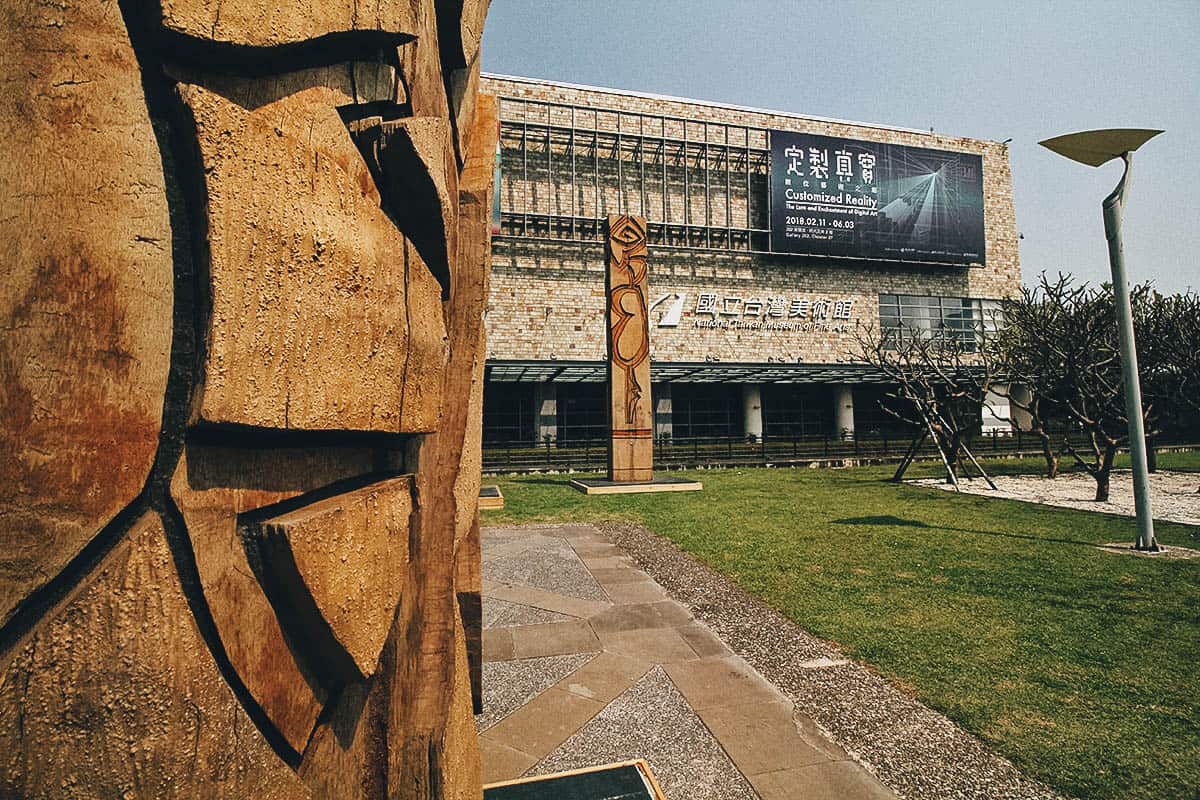 When we visited in March 2018, the entire first floor and garden were dedicated to the gigantic sculptures, wood carvings, and paintings of Taiwanese artist A-Sun Wu. Many of his sculptures and wood carvings were massive. As you can see below, some were even taller than the building. 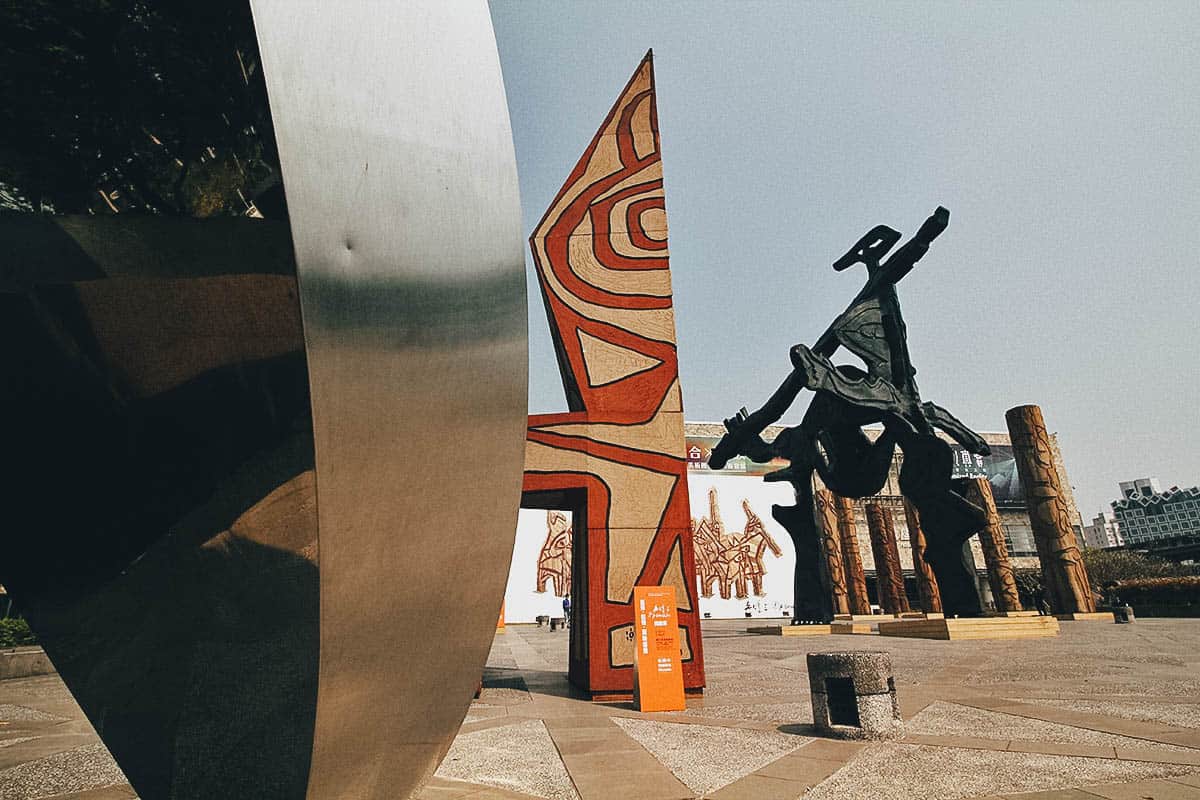 The museum is modern and very well-maintained, which is why I was surprised to learn that admission is free. As described, the entire first floor during the time of our visit was dedicated to the work of A-Sun Wu. I was amazed by his extensive body of work which spanned many different types of media. This man was incredibly prolific. 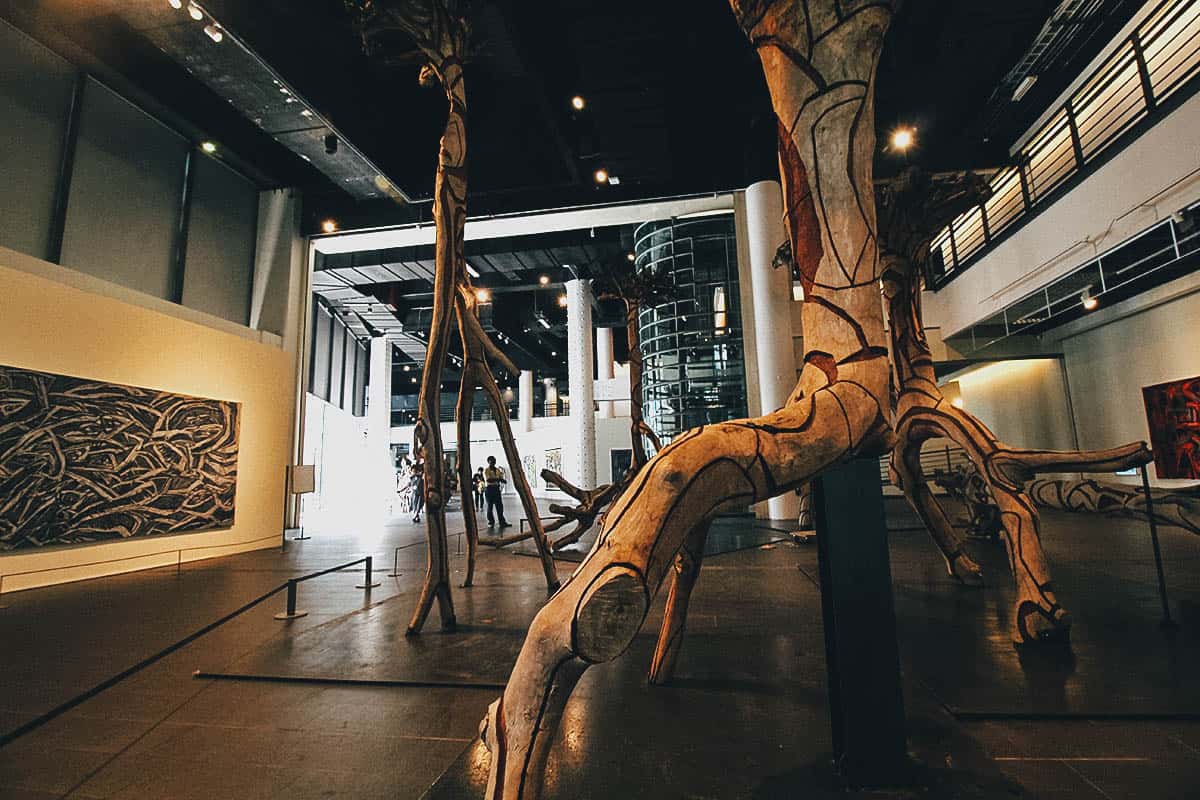 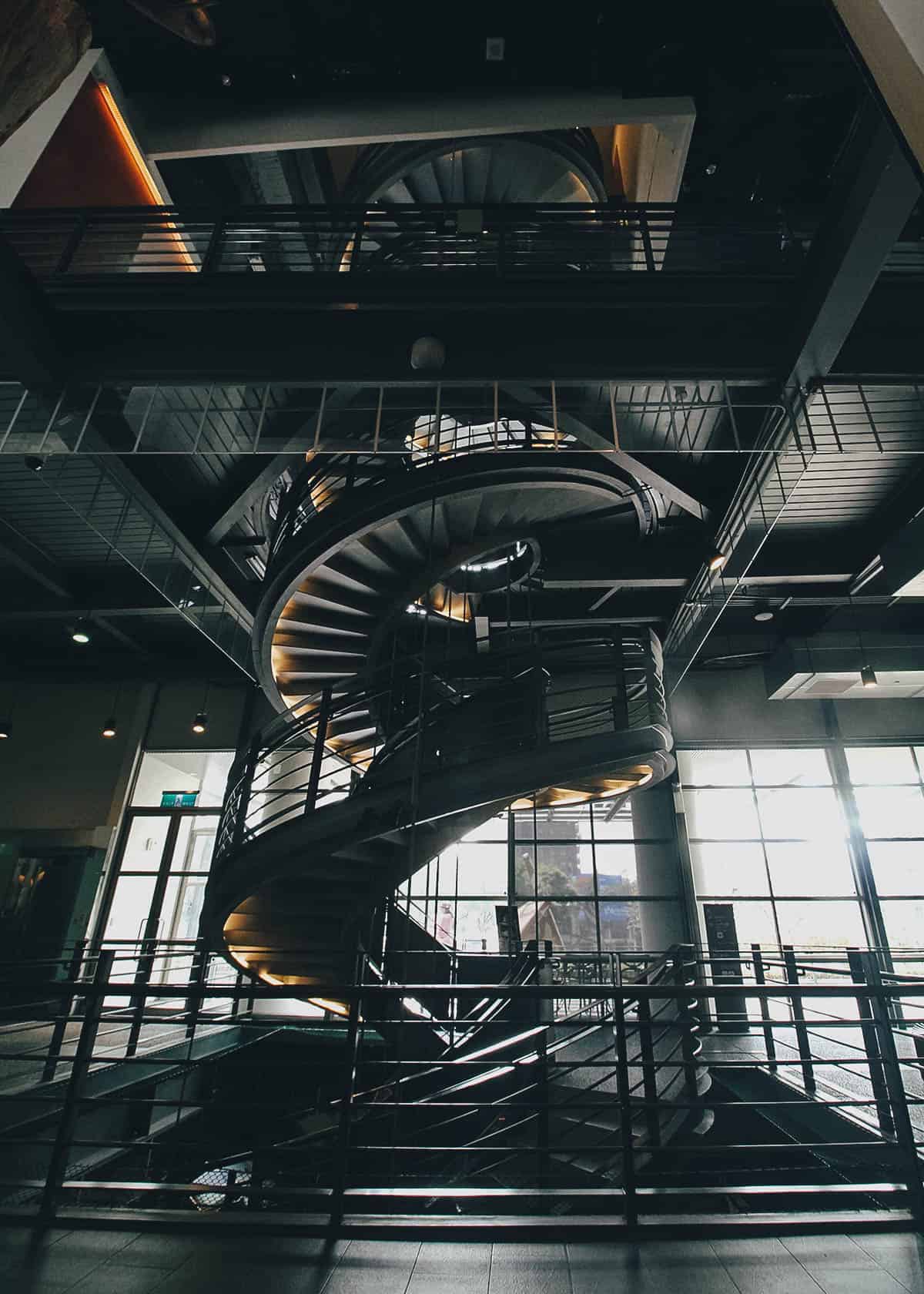 When we were there, on the second floor were interactive digital exhibits while the third floor galleries featured more traditional art like paintings and sketches. The digital exhibits were the most fun and my favorite part of the museum. 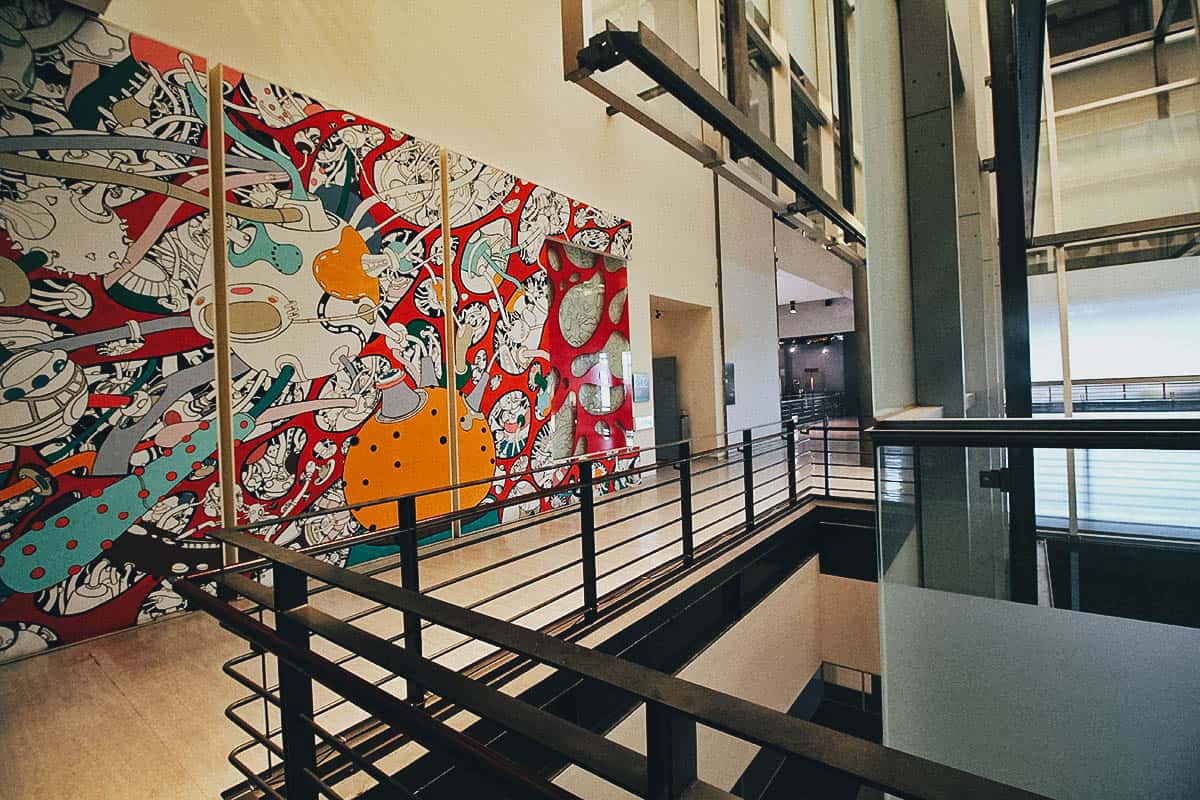 This place was cool and something I probably never would have found on my own. Located a couple blocks west of Calligraphy Greenway, Audit Village was one of the places we visited on that blogger trip I mentioned at the top of this post. It’s basically a small compound of artist studios, workshops, and cafes housed in an old dormitory block once used by Japanese provincial government staff. 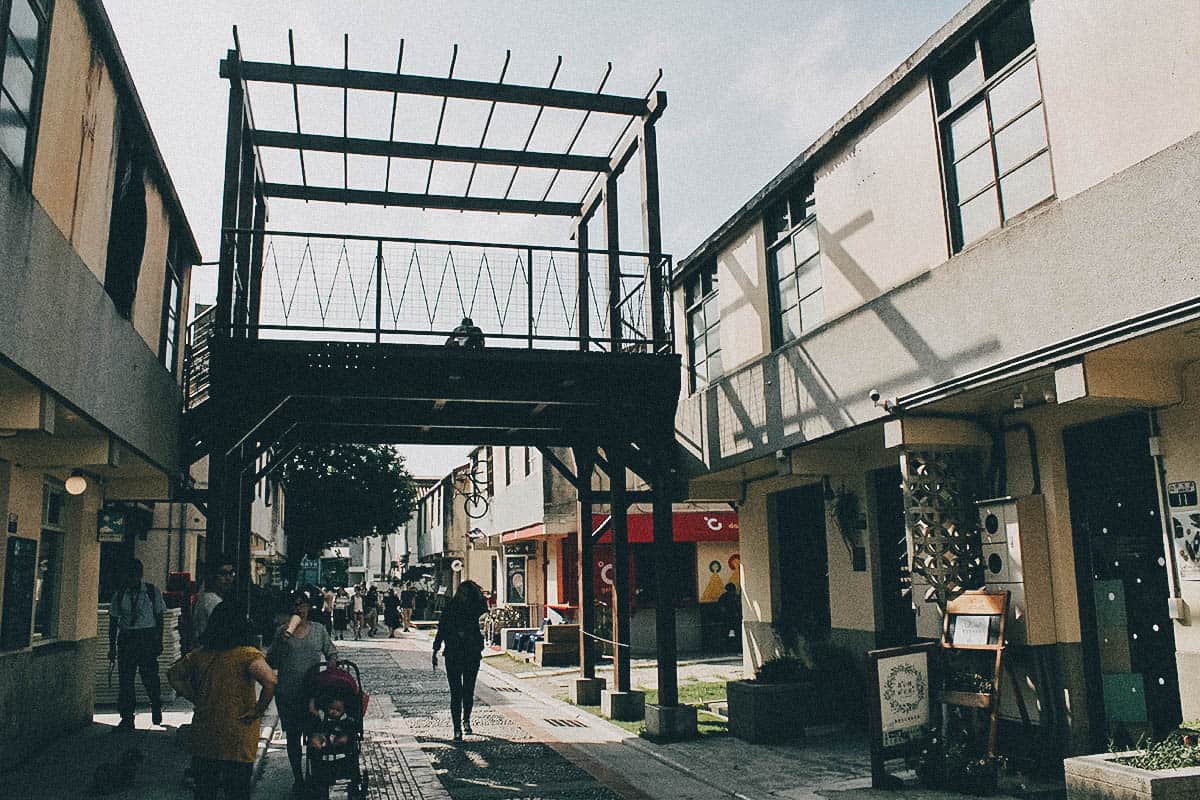 Like the rest of the neighborhoods surrounding Calligraphy Greenway, Audit Village is teeming with character. 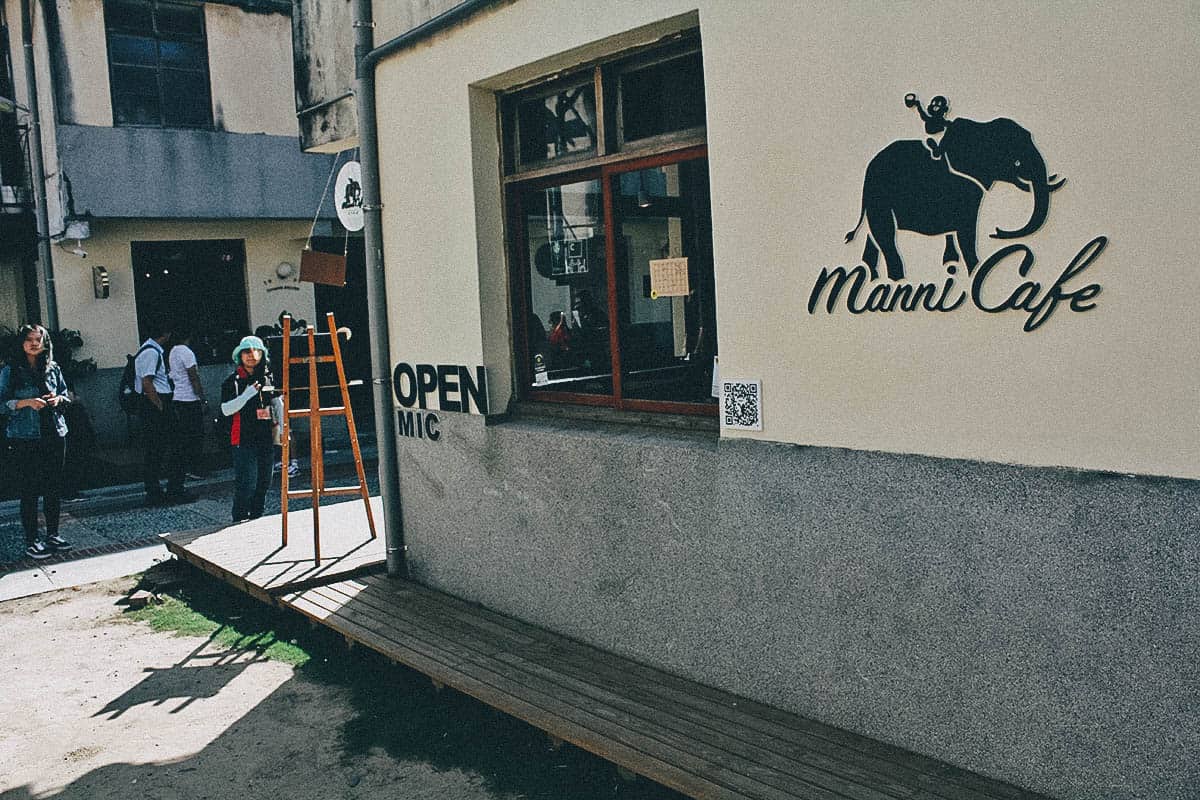 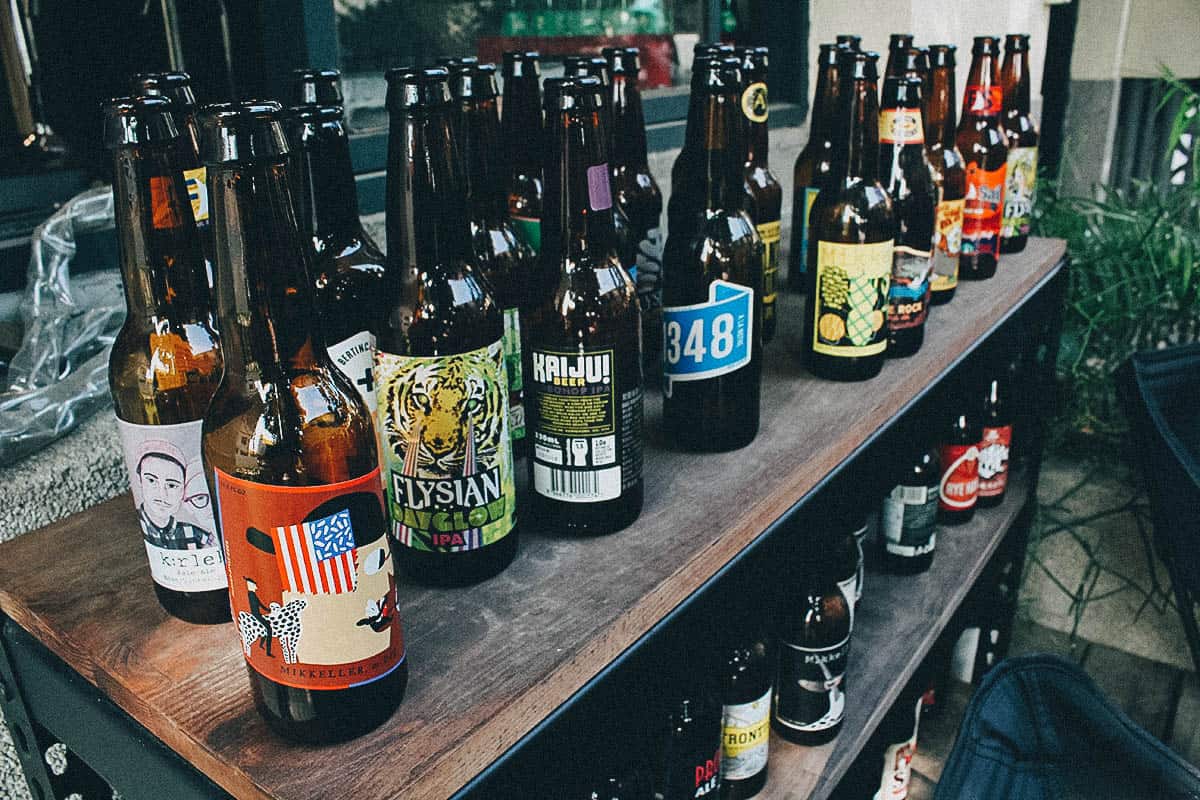 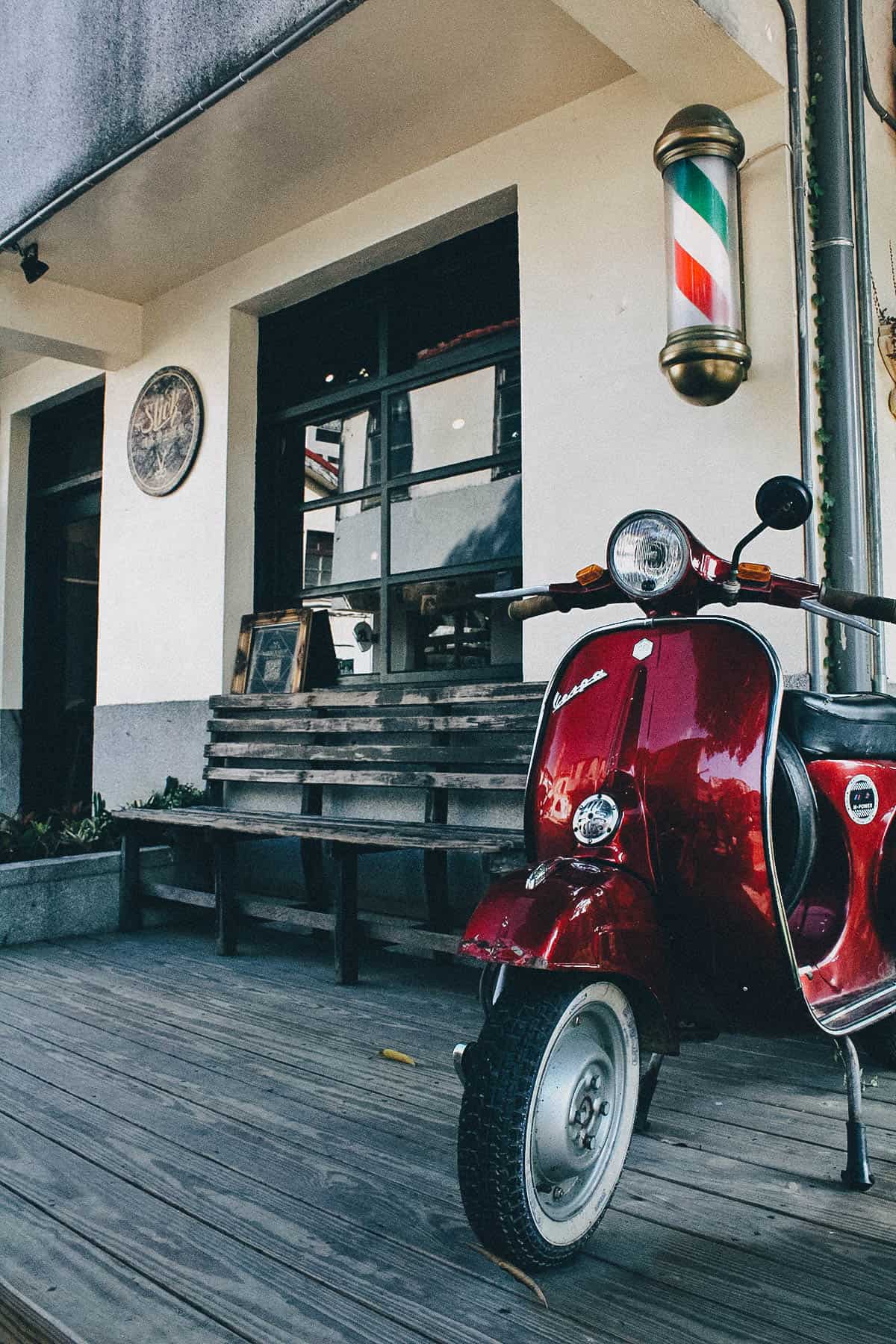 Be sure to go upstairs and explore the second floor as well. 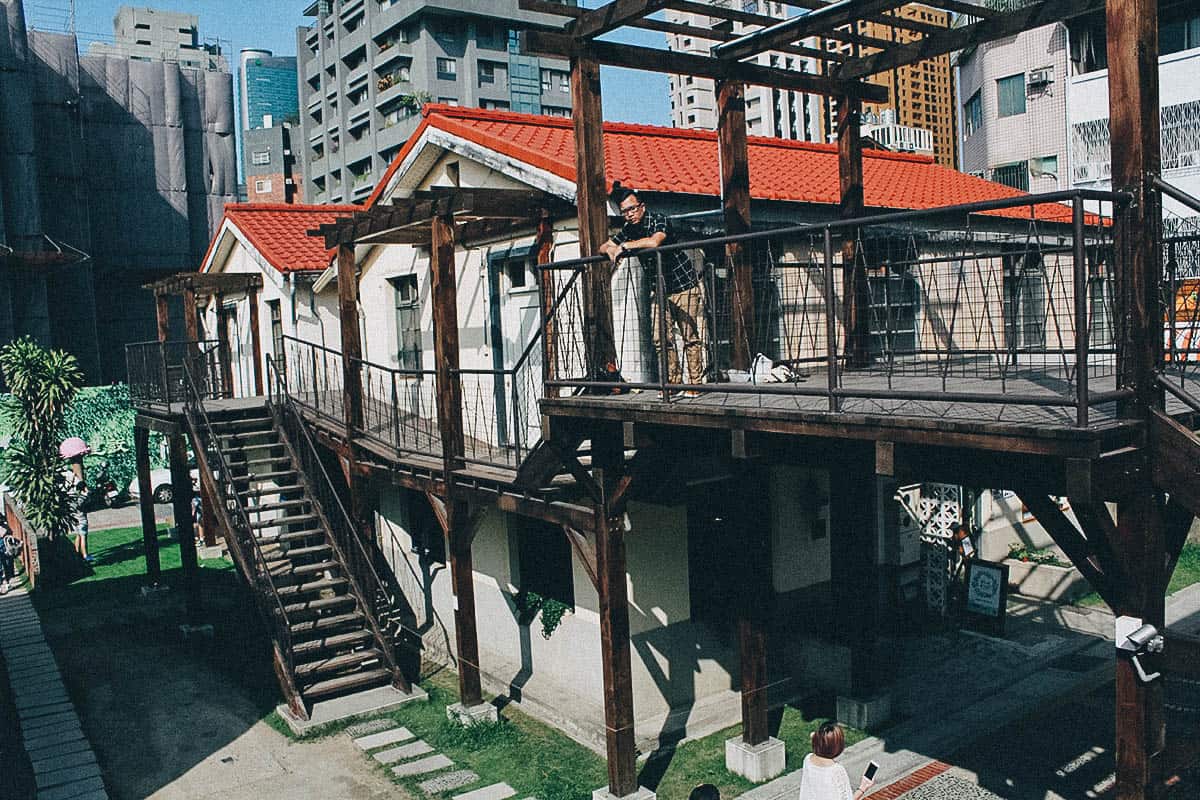 It was fairly empty when we went but it gets pretty busy during the weekends when markets are held throughout the space. 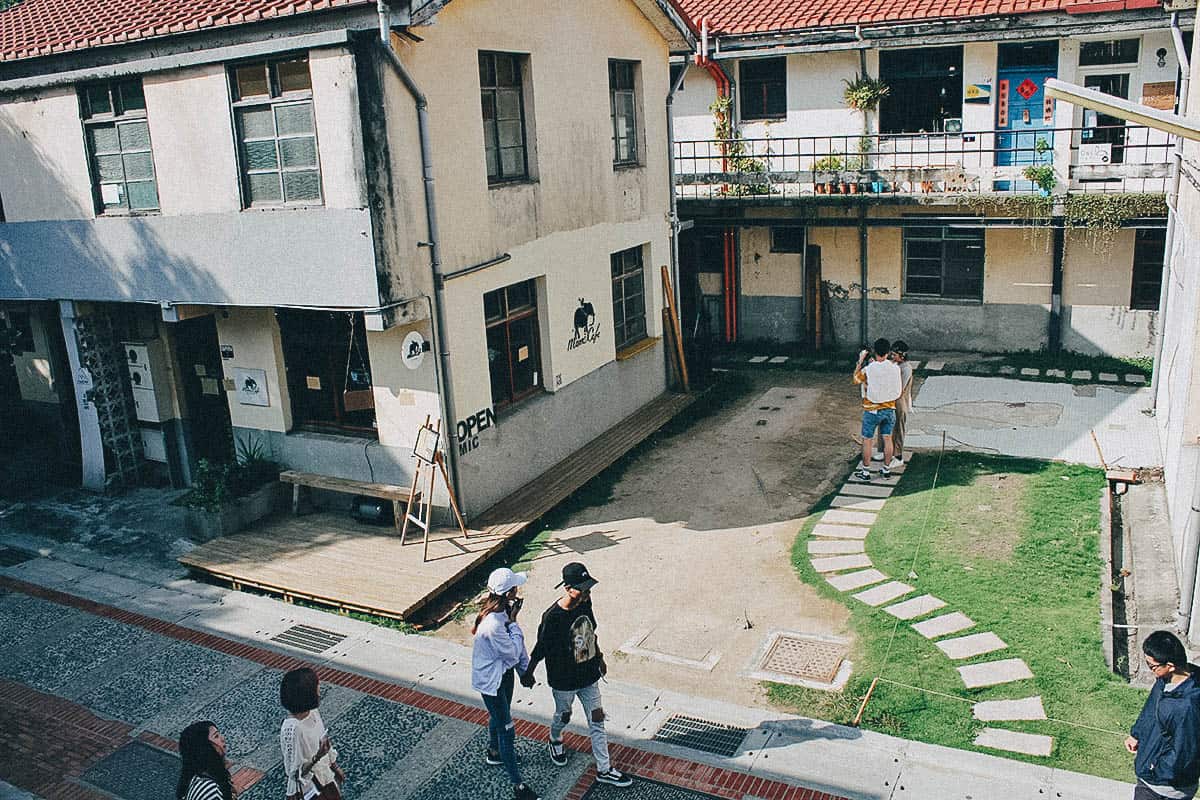 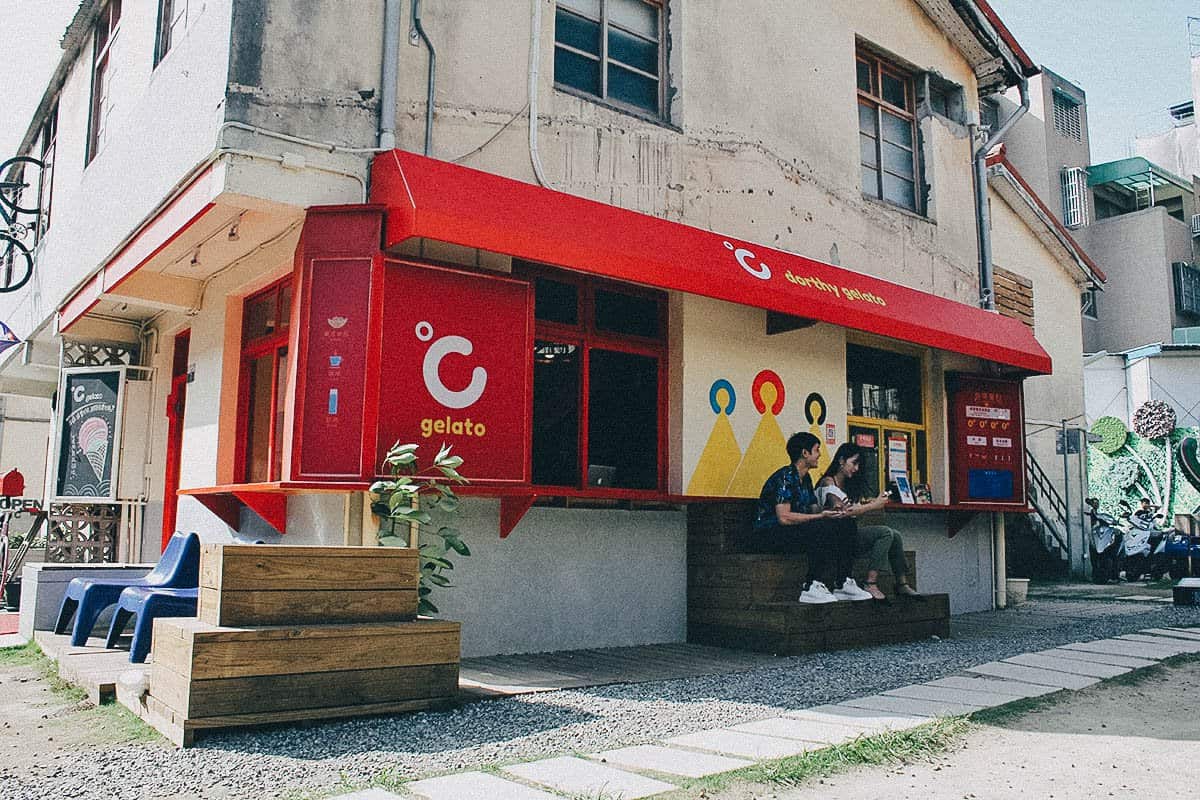 Address: Alley 2, Lane 368, Minsheng Rd, Taichung 40358, Taiwan
Facebook: AuditVillageTaichung
How to Get There: From the National Taiwan Museum of Fine Arts, walk north on Section 1, Meicun Road. Make a right on Minsheng Road and the entrance to Audit Village will be on your left.

Like Audit Village, Fantasy Story is another example of the hidden pockets of coolness just waiting to be discovered around Calligraphy Greenway. 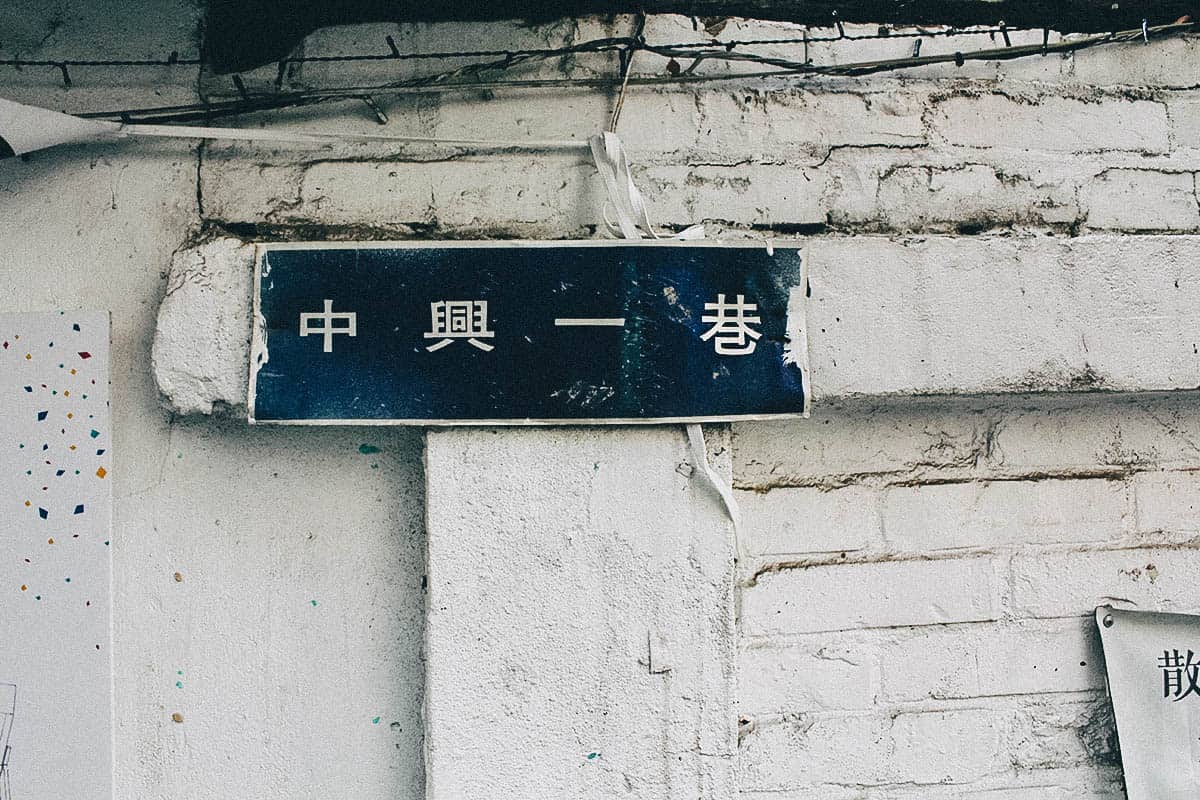 On that same blogger trip, we were taken to the Fantasy Story on Zhongxing 1st Lane but as it turns out, it’s spread out over three streets. Most of the shops are divided between Zhongxing 1st Lane and Lane 117, Meicun Rd, Section 1, but a handful of shops can also be found on Xiangshang North Rd. 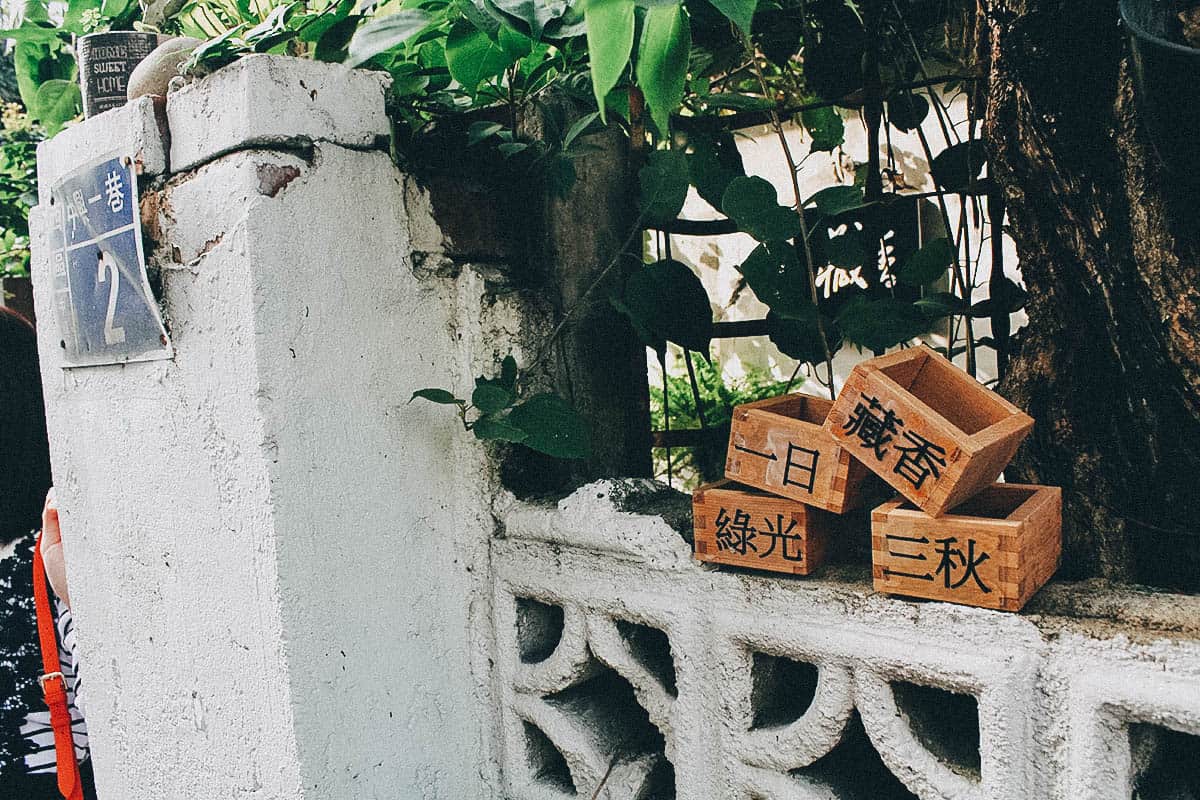 Fantasy Story is an eclectic mix of shops, restaurants, and boutiques. These pictures are from Zhongxing 1st Lane but Fantasy Story’s main cluster of shops is on Lane 117, Meicun Road, in a disused former water facility that’s been repurposed into a hip commercial space. 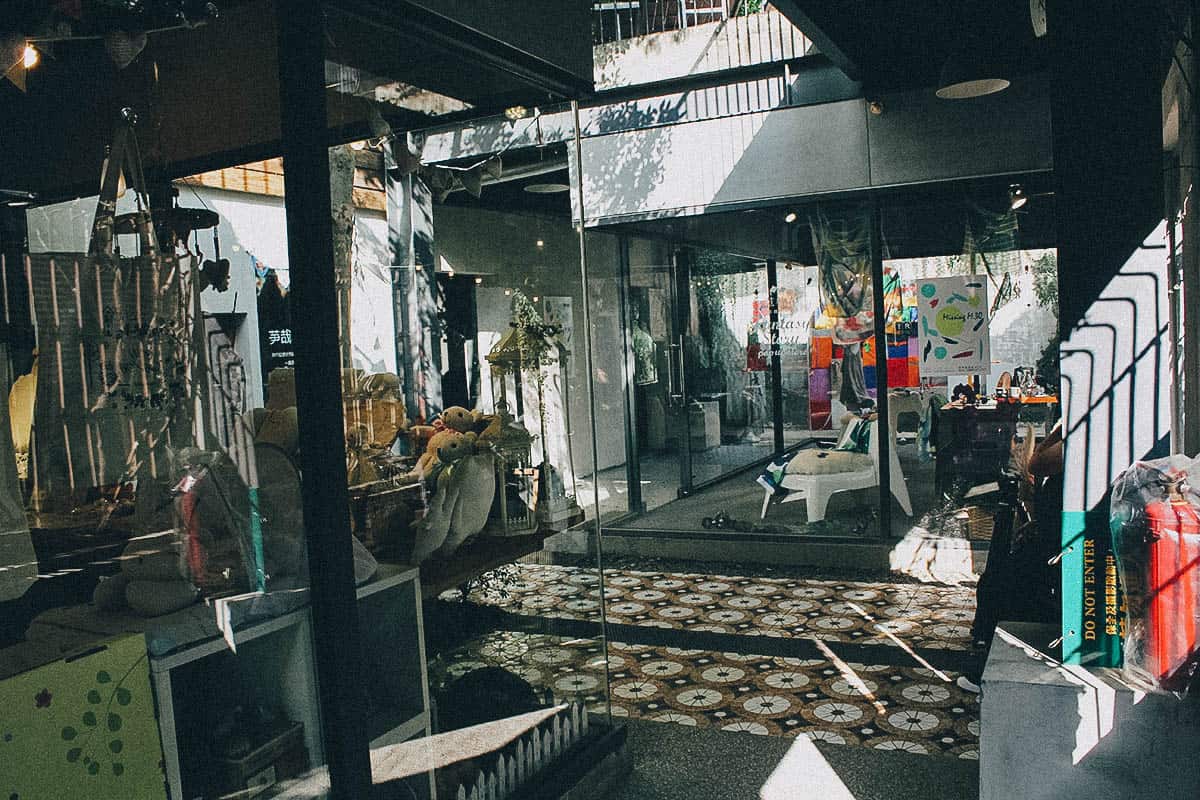 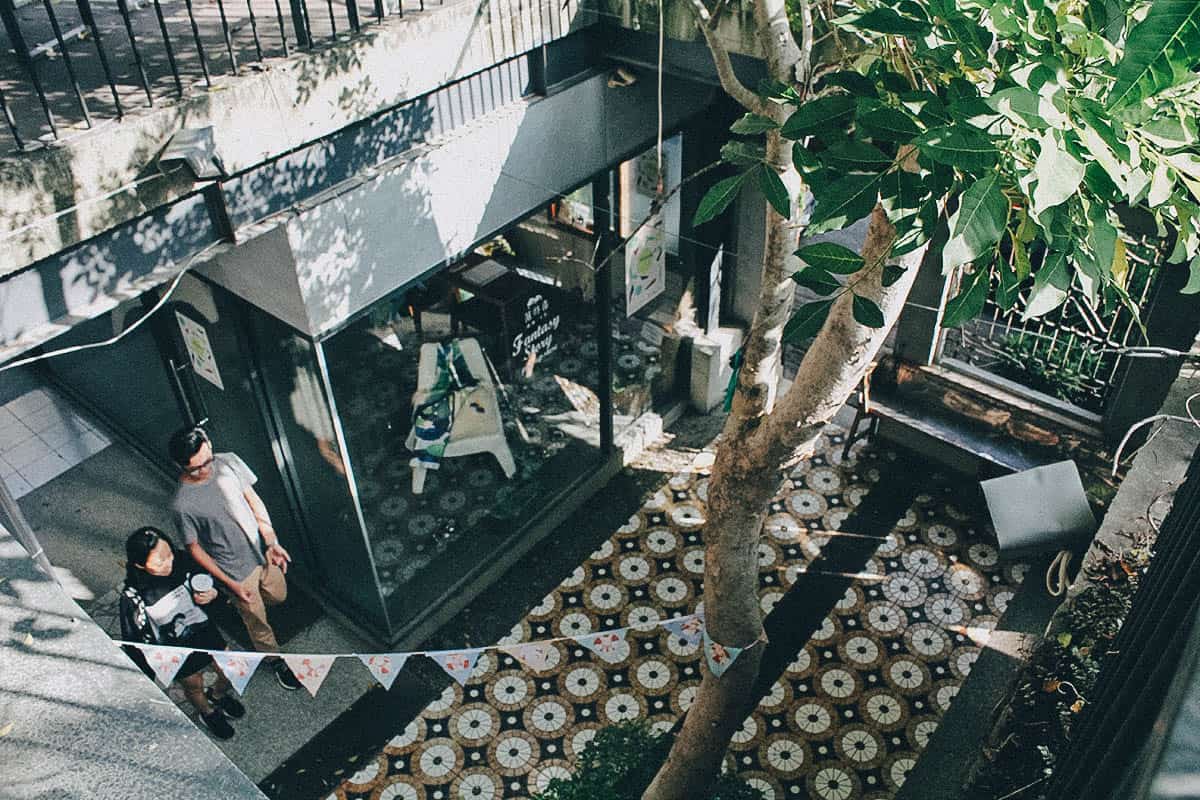 This shop with the sawed off Mini Cooper was selling all sorts of vintage American memorabilia. 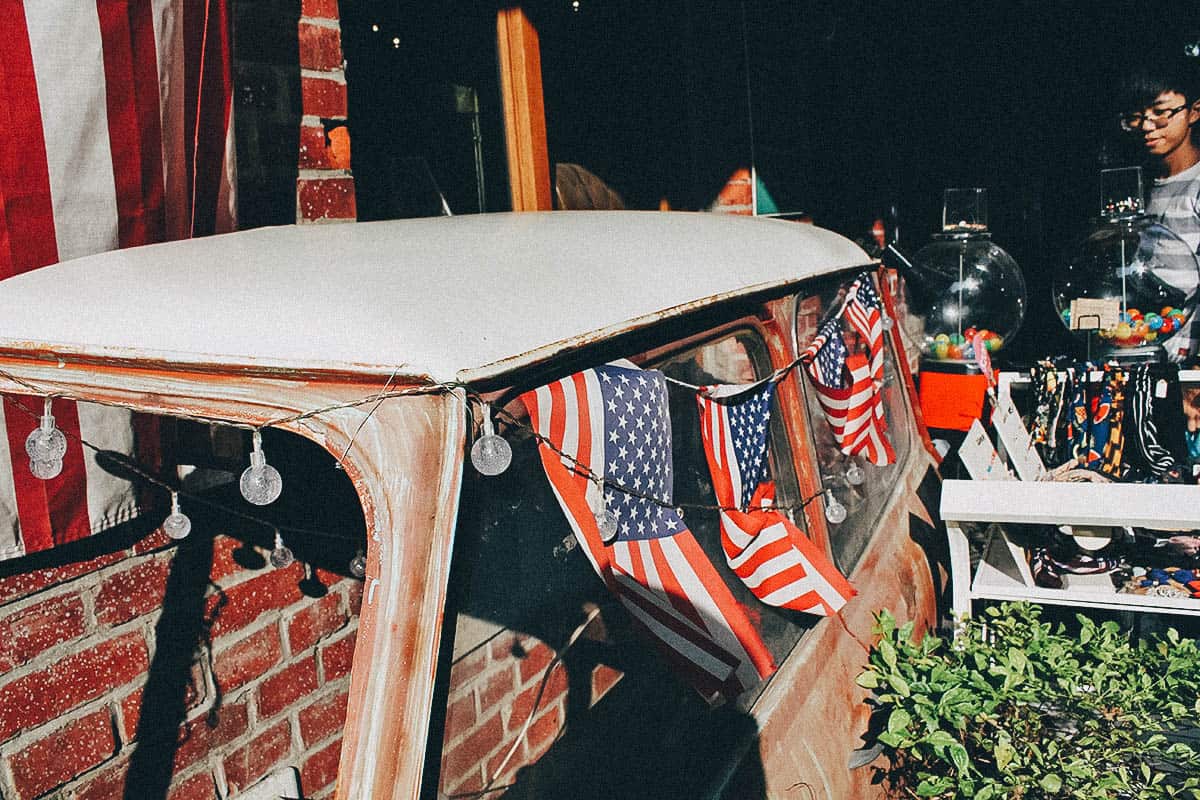 This one was selling funky lightbulbs and other expensive-looking handcrafted items. 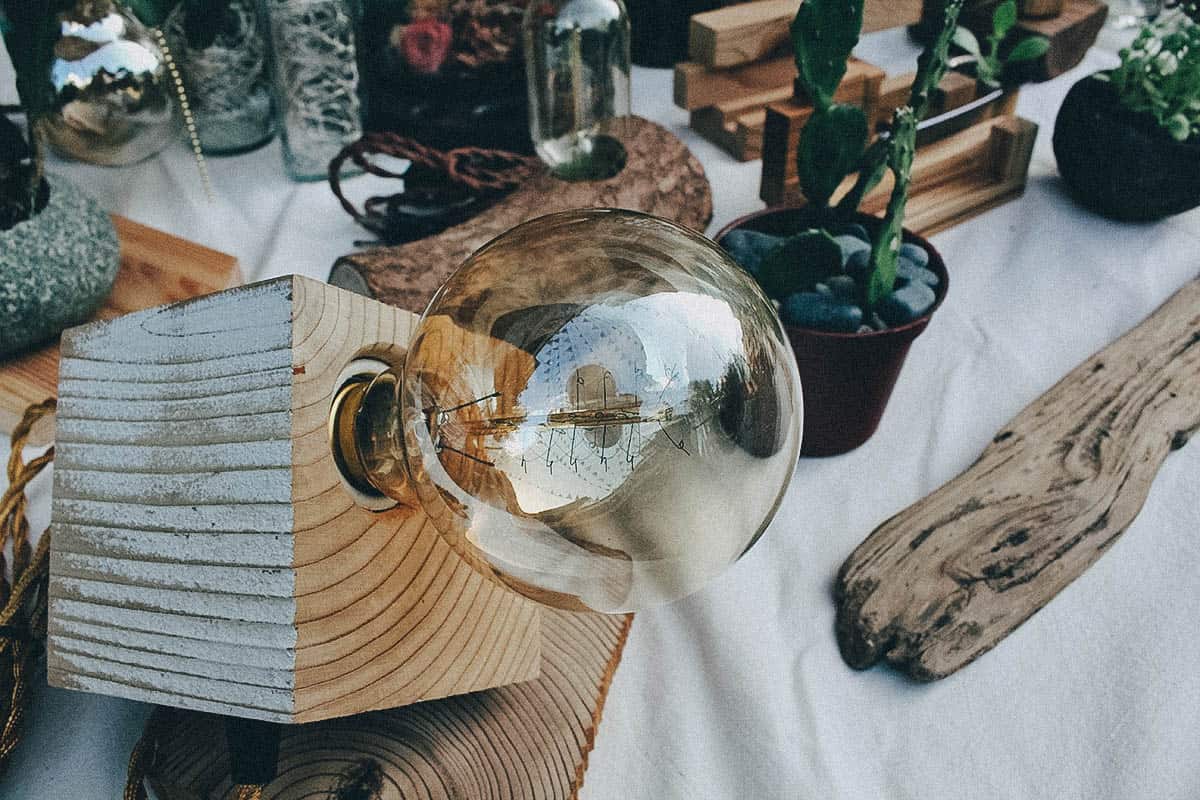 I thought I’d throw this in here just to show you all the quirky shops you can find around Calligraphy Greenway. We were walking around the neighborhood when we chanced upon this charming book shop called Book Store Forbeginners. We didn’t go in so I don’t know if they have any books in English, but these murals make for a fun Instagram backdrop. 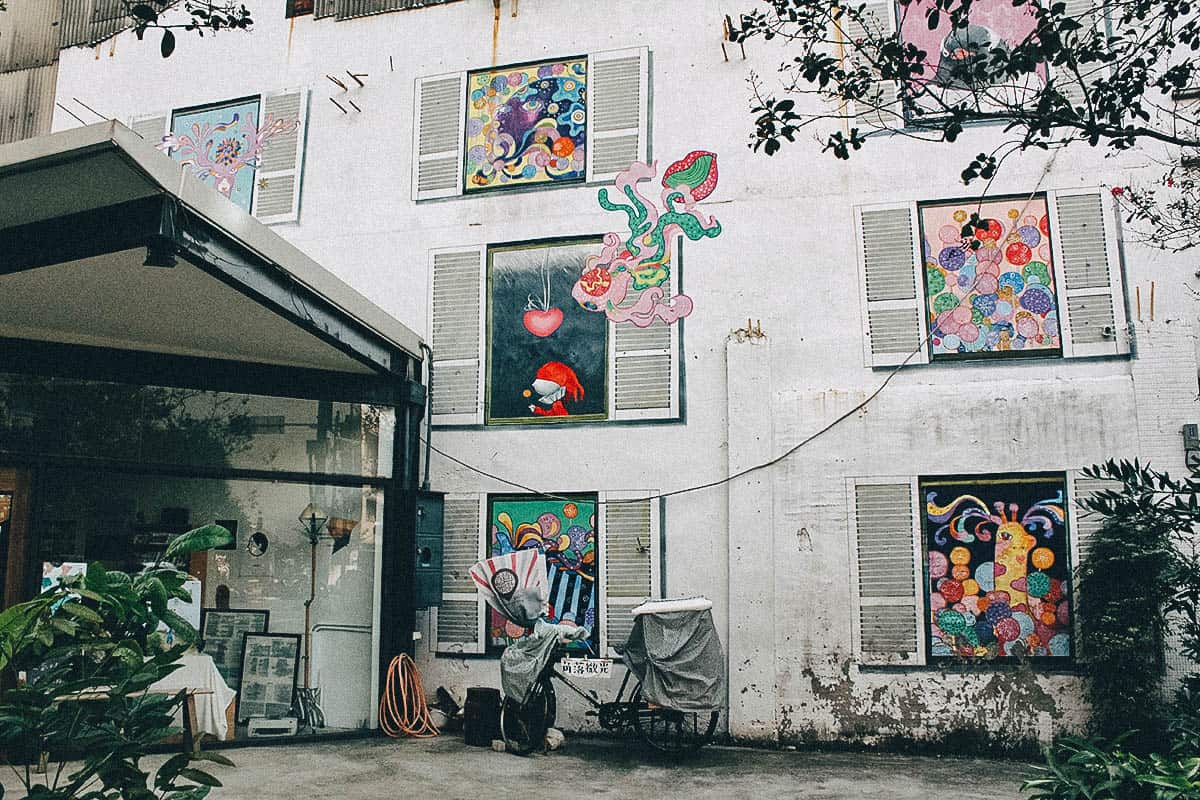 If you’re a fan of Warcraft, then this statue needs no introduction. This giant 14 foot bronze statue of Lich King Arthas Menethil weighs a staggering 4,000 pounds. The cape alone weighs a thousand pounds!

Designed by Taiwanese artist Steve Wang, it took more than thirty people and nine months to complete this statue that was built to commemorate the 25th anniversary of Blizzard Entertainment. I’m not familiar with the game but fan or not, this statue is pretty badass. 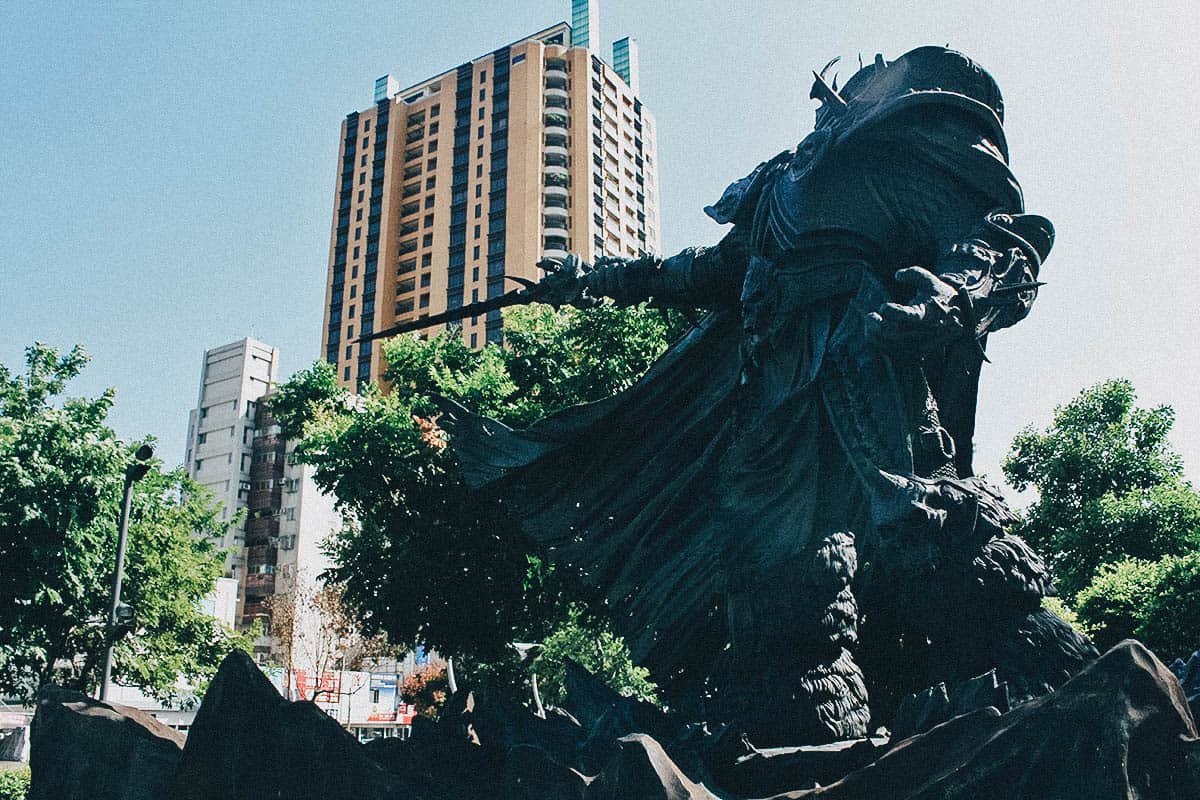 Address: No. 100, Xiangshang North Road, West District, Taichung City, Taiwan 403
Tel: +886 4 2305 0215
Operating Hours: 24 hrs
How to Get There: From Book Store Forbeginners, walk east on Xiangshang North Road towards Calligraphy Greenway. The statue will be on your right.

If you like shopping for unique artsy items, then you’re going to love this place. Located around the middle of Calligraphy Greenway, Caowu Square is a retail space showcasing products created mostly by Taichung-based designers. 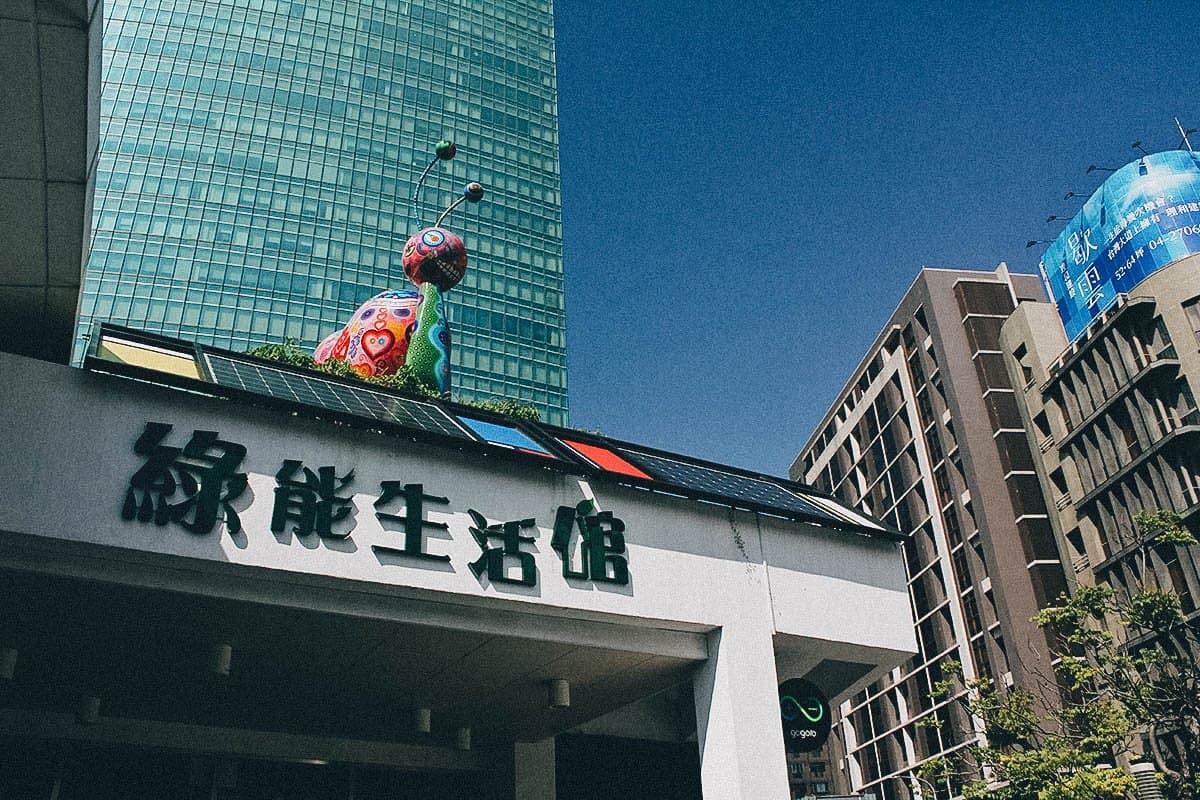 There are plenty of interesting and unique products on sale at Caowu Square so you can easily spend a good hour just going through all the items. 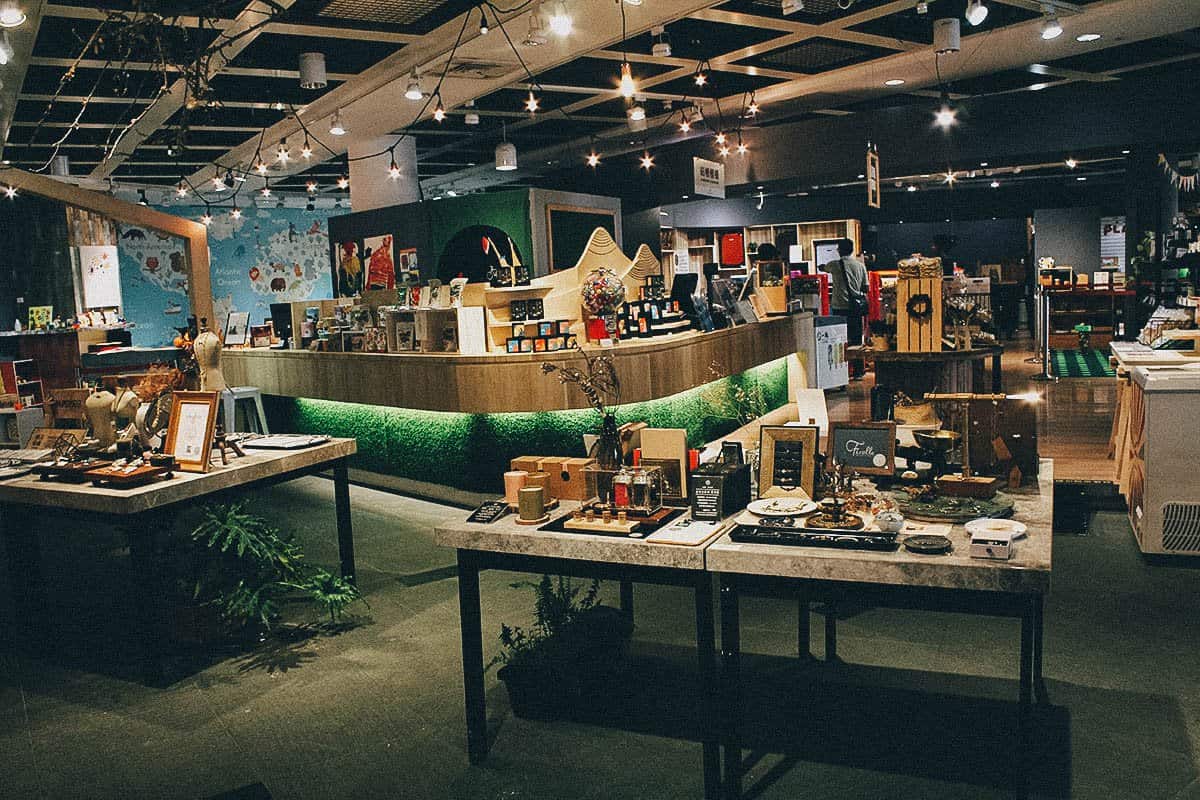 If I remember correctly, about 90% of the products sold here are created by Taichung-based designers. I love it when establishments support local. 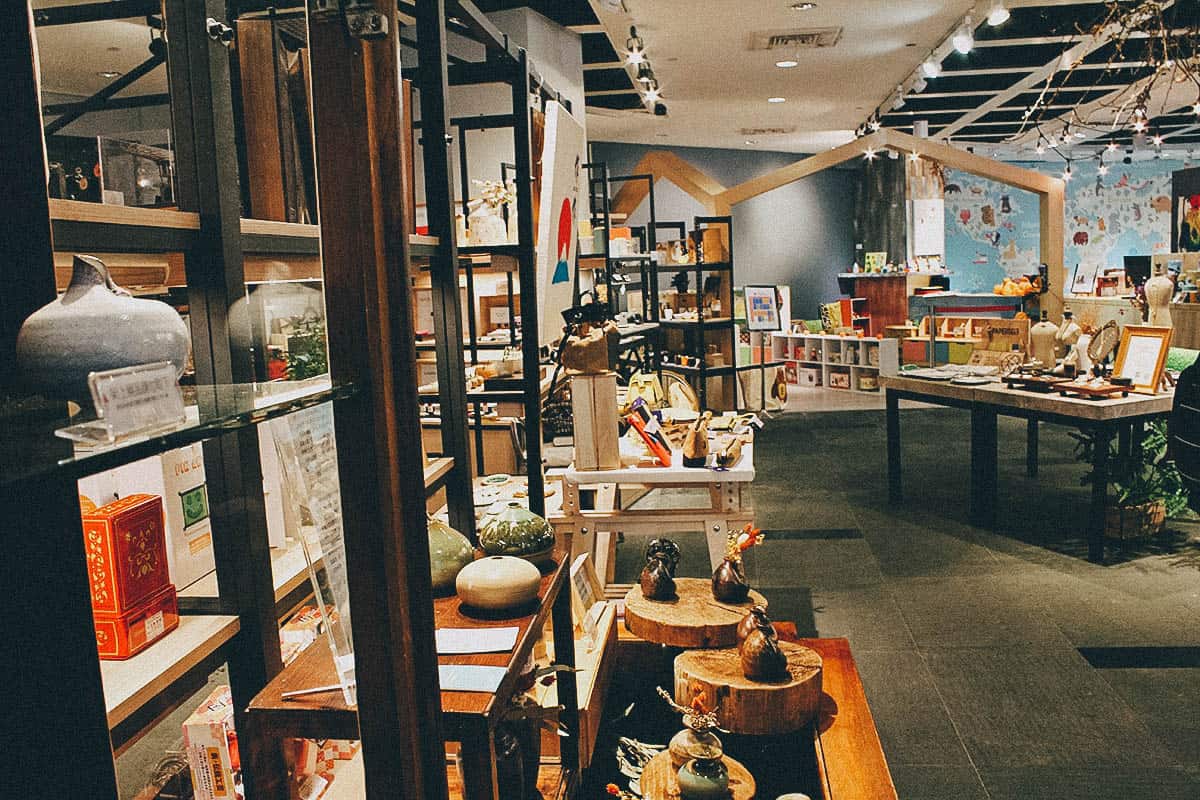 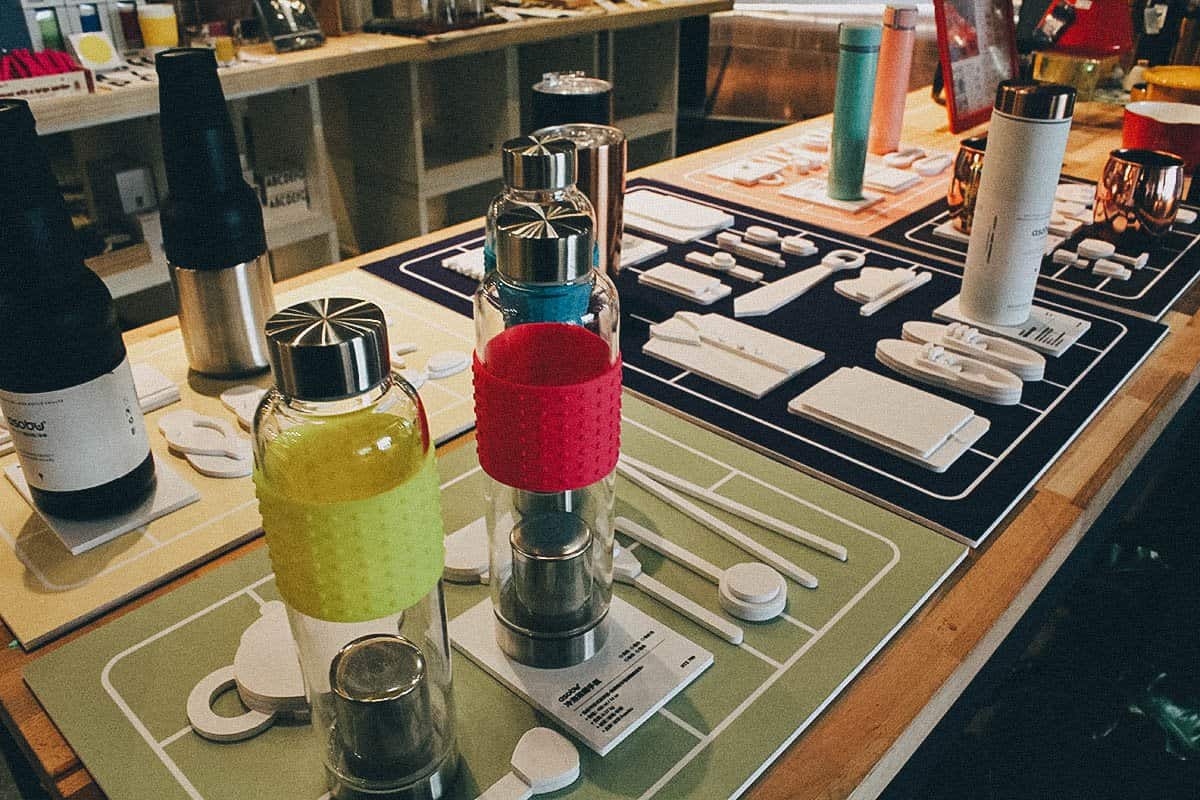 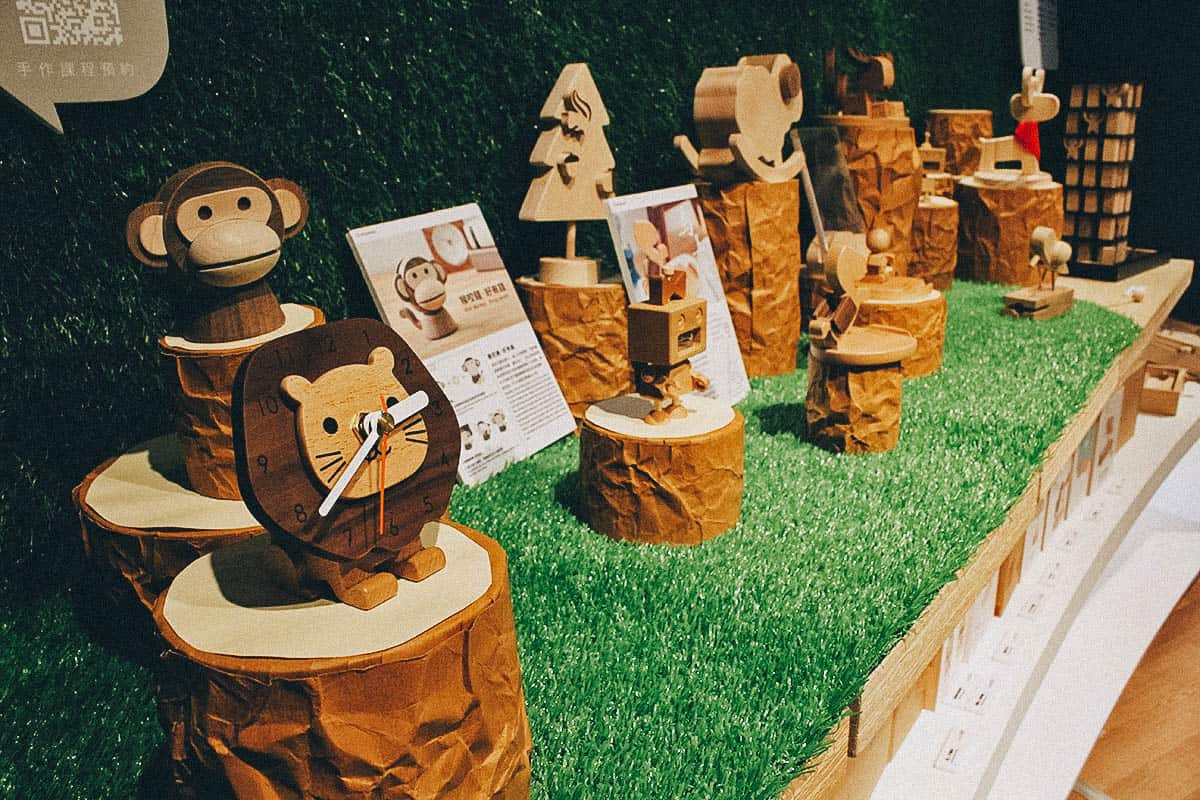 There are a few restaurants and cafes here as well, including this segway rental shop. You can take them out for a spin around Calligraphy Greenway if you wish. 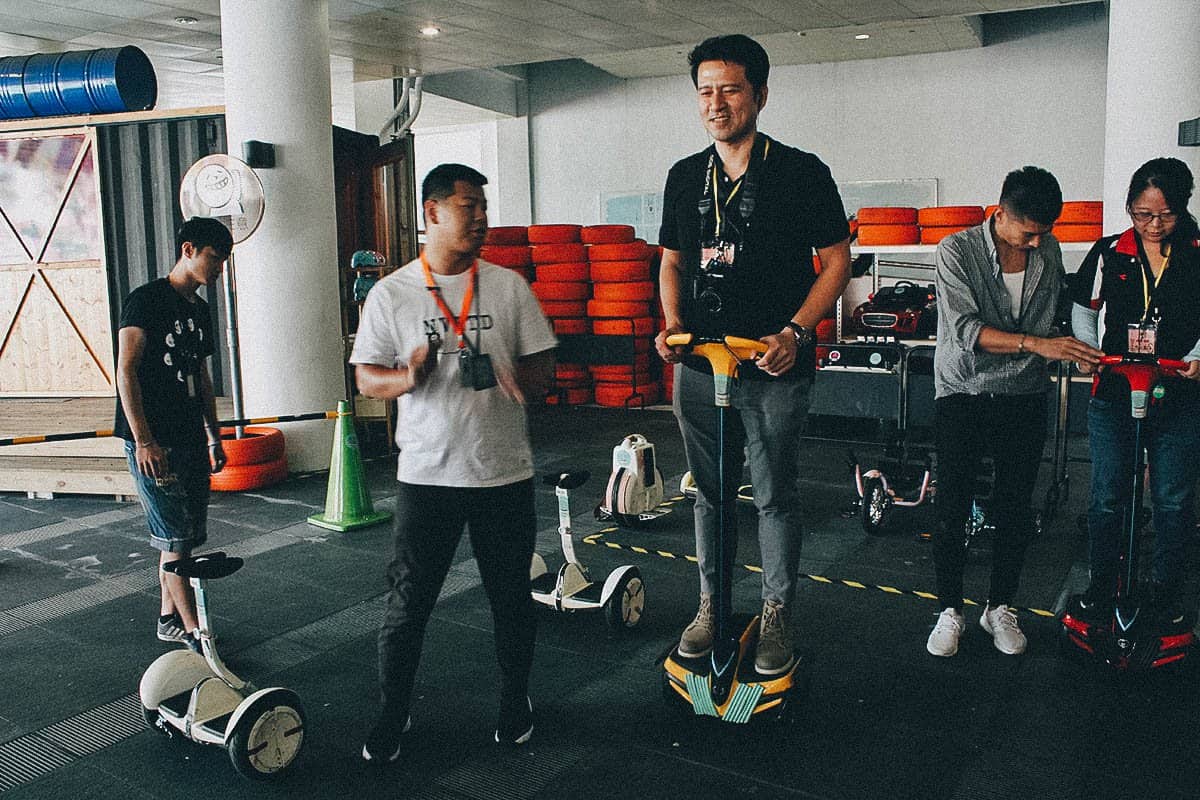 They were between events when we were there so you may want to check their website for a schedule of exhibits. 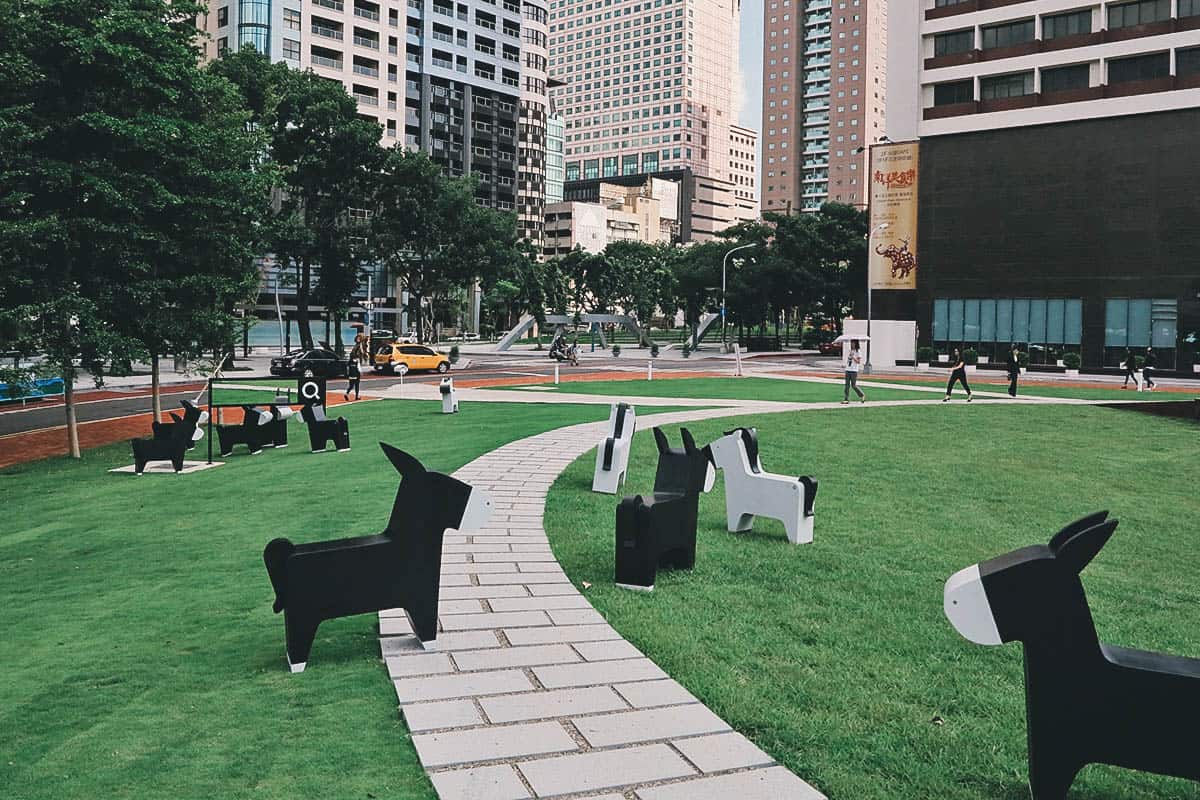 “IMG_5755 – CMP BLOCK Museum of Arts 勤美術館.JPG” by 準建築人手札網站 Forgemind ArchiMedia, used under CC BY 2.0 / Processed in Photoshop and Lightroom

We didn’t go but if you’re traveling with kids or enjoy science museums, then you may want to visit this one. Located at the northernmost end of Calligraphy Greenway, the National Museum of Natural Science is a large complex covering 22 acres of exhibit space.

It’s comprised of six distinct venues – the Space IMAX Theater, the Science Center, the Life Science Hall, the Human Culture Hall, the Global Environment Hall, and the Botanical Garden. There are over thirty permanent exhibits at the museum so I imagine you could easily spend a good 2-3 hours there. 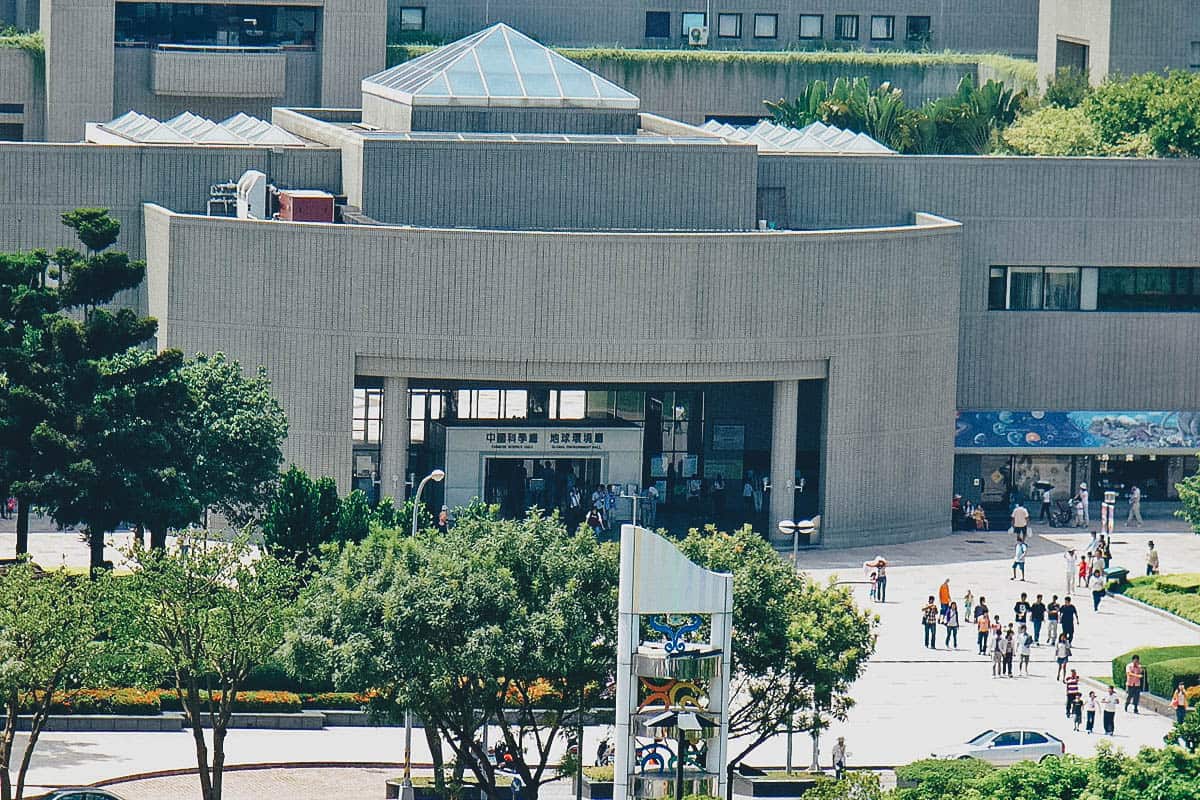 David Villa, CC BY 2.0, via Wikimedia Commons / Processed in Photoshop and Lightroom

Some of the places mentioned in this post can be hard to find so to help you navigate, I’ve pinned them all on the map below.

You can also download a copy of our entire 2-week Taiwan itinerary in editable Word format from our EAT-ineraries page. It covers Taipei, Tamsui, Jiufen, Taichung, Sun Moon Lake, Tainan, Kaohsiung, and Hualien.

Thanks for reading and have fun exploring the artsy Calligraphy Greenway neighborhood in Taichung! 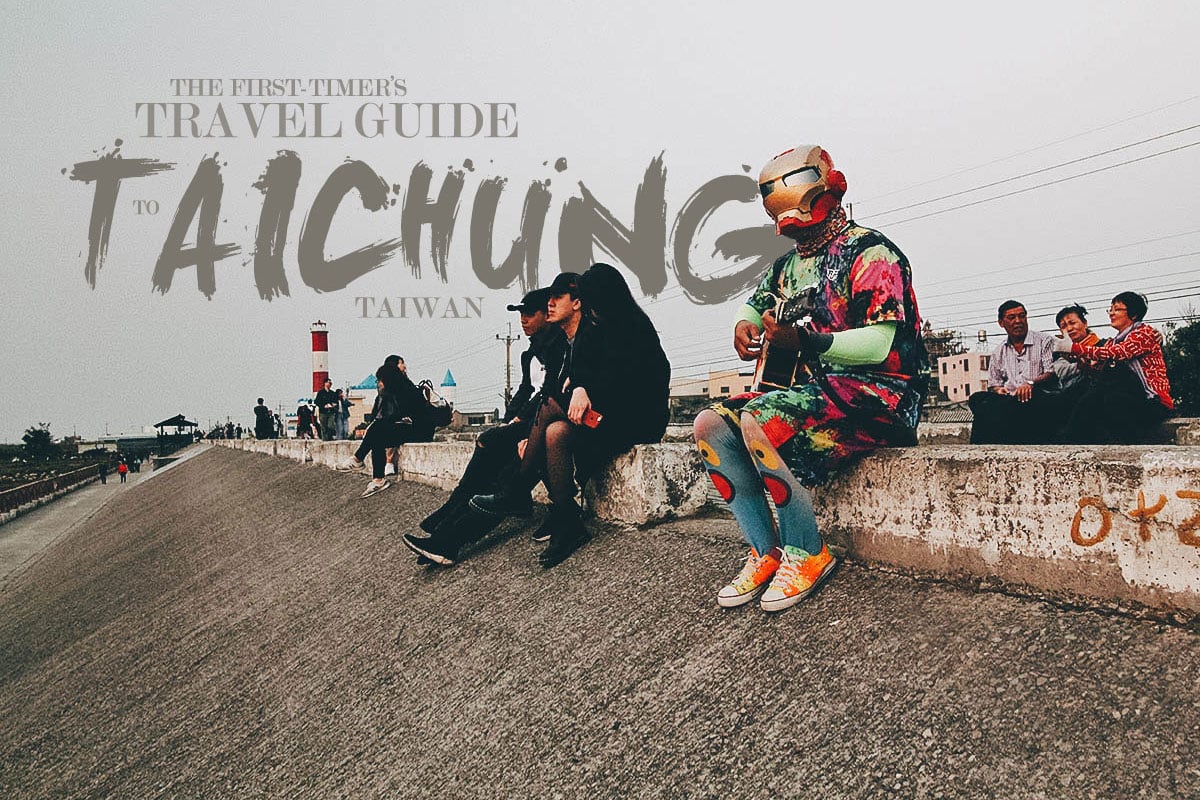 Very informative! How much did it take you to go around Calligraphy Greenway?

Hi Nash, not sure what you mean. Calligraphy Greenway isn't that big so you can easily explore it on foot.

Excellent and unique blog post! I've been looking for non-touristy thingsto do in Taichung and this is perfect!

Do you have any suggestion for eateries along the Greenway? I plan to visit the Fine Arts Museum in the morning and stroll the Greenway after but that'd be lunch time and I don't see many reviews on food around there.

Hi DD, I'm afraid we didn't eat anywhere too close to the Greenway but I looked at the map and found a Chun Shui Tang branch just south of the park. They offer a full menu there aside from their bubble tea so that may be a good place to go. We ate at the original branch and enjoyed it. Hope that helps! :)

Do you know this place has luggage storage service? Thank you

Hi Trang, not sure but you can check lalalocker for places that store luggage in Taichung.