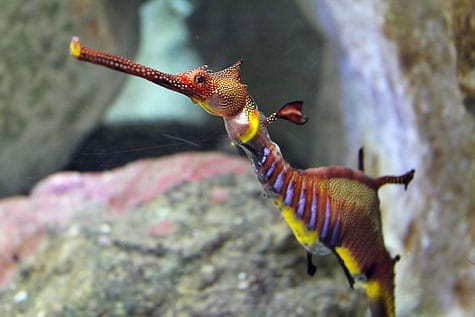 Set in beautiful Darling Harbour in the heart of Sydney, the Sydney Aquarium showcases over 12,000 aquatic animals from 650 species in spectacular habitat displays, including the world’s largest Great Barrier Reef exhibit and spectacular underwater viewing tunnels. Frequently listed as one of the world’s top aquariums, the Sydney Aquarium houses one of the world’s largest and most impressive collections of sharks, dugongs, platypuses, seahorses, tropical fish, stingrays, and crabs, many of which I had never seen before.

I had some time to kill during our recent trip to Sydney, so for AUD 35, I spent a couple of leisurely hours here photographing as many of these amazing creatures as I could. It was dark and all the animals were behind glass (obviously and thankfully), so the photos didn’t come out as well as I had hoped. Below are a few of the better images. There were LOTS more though so if you think the animals pictured here are cool, then you should definitely go see them for yourself if you ever find yourself with a few hours to spare in Sydney. 😉

Soon as you enter the lobby, you’re greeted by this giant lego statue of Poseidon. 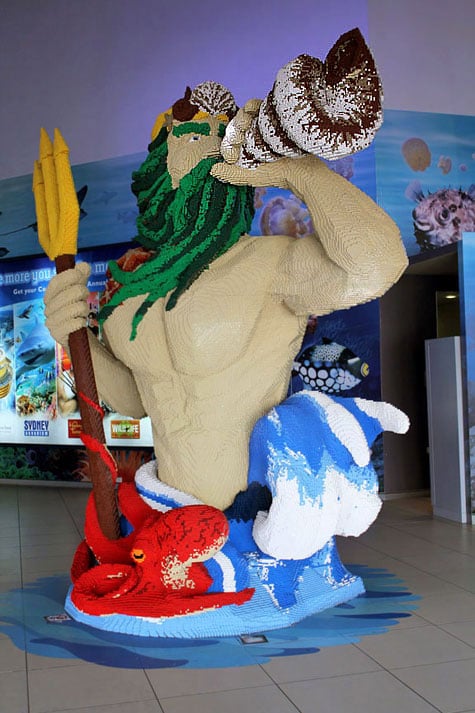 Platypus – Ornithorhynchus anatinus – How cute! My first time seeing a platypus, I tried to get better photos but the room was just way too dark to get any sharp images of this very fast-moving animal.

A semi-aquatic mammal endemic to eastern Australia, the platypus, together with the four species of echidna, is one of only five existing species of monotremes, mammals that lay eggs instead of giving birth to live young. If the concept of an egg-laying mammal isn’t unusual enough, the platypus is also duck-billed, beaver-tailed, otter-footed, and venomous, with the males capable of delivering a painful venom via a spur on its hind foot. Awesomely bizarre indeed! 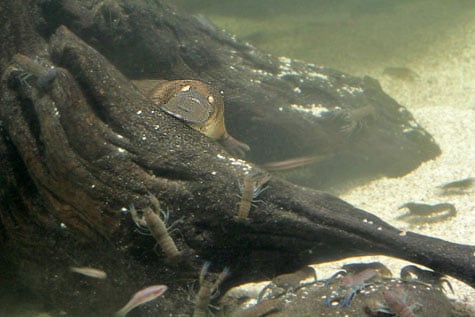 Upside Down Jellyfish – Cassiopea andromeda – So named for its habit of resting on the bottom, bell side down, to get more light to its tentacles. Their tentacles have algae which provides food for the jellyfish through photosynthesis.

The upside down jellyfish’s stings cause red, rash-like skin irritations that are notorious for being extraordinarily itchy. This jellyfish is sometimes picked up by the urchin crab and carried on its back as a defense against possible predators. 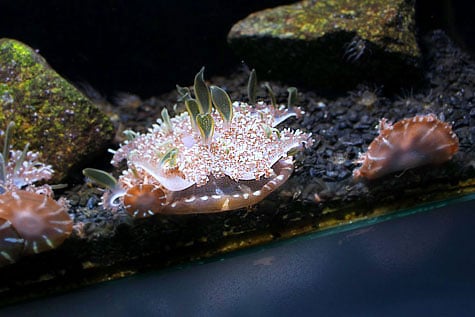 Weedy or Common Sea Dragon – Phyllopteryx taeniolatus – Stunningly beautiful, this relative of the seahorse is a specialist feeder on tiny shrimp-like crustaceans called mysids. Unlike seahorses, males brood eggs on their tail, rather than in a brood pouch. 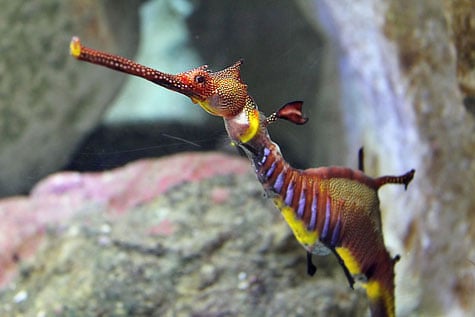 Giant Cuttlefish – Sepia apama – The world’s largest cuttlefish species, the giant cuttlefish can grow to an adult mantle length of 50 cm and over 10.5 kg in weight. 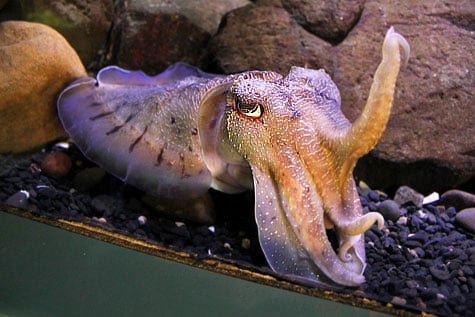 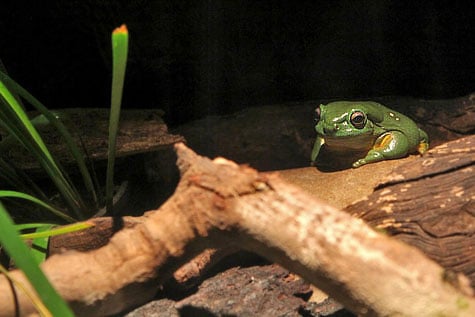 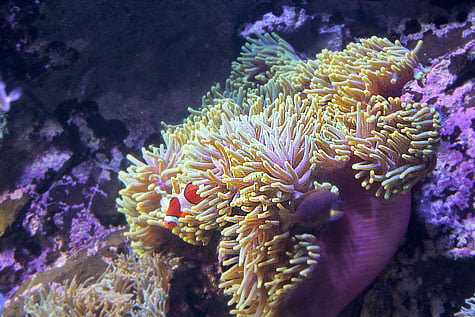 L: Glow in the dark coral R: Some unknown, tiny yellow fish chilling on the front pane of his tank. 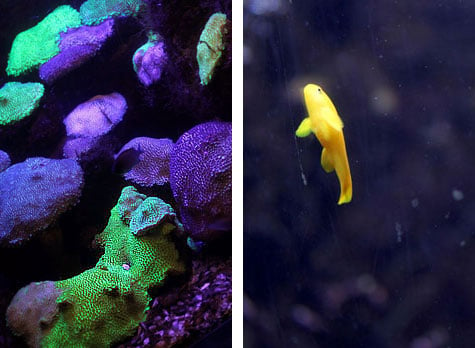 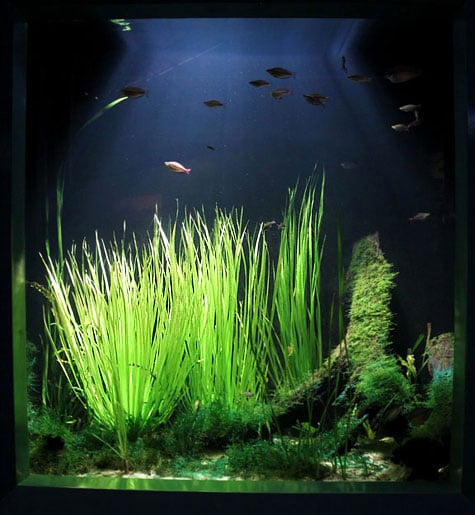 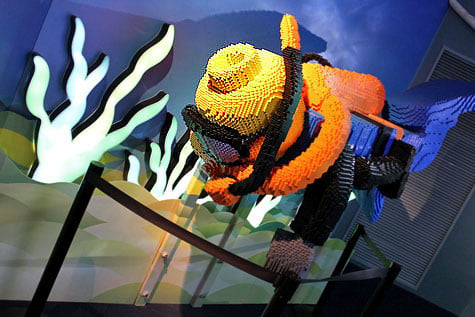 This underwater observation tunnel was way cool, complete with ambient music to enhance the experience. 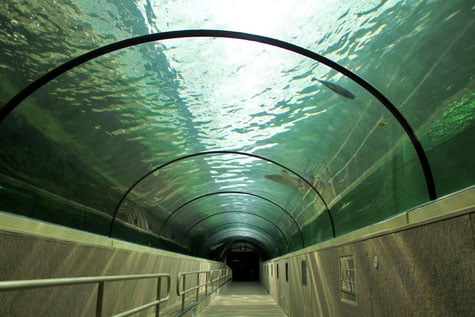 The Sydney Aquarium is home to several species of sharks. Not sure what these were though. 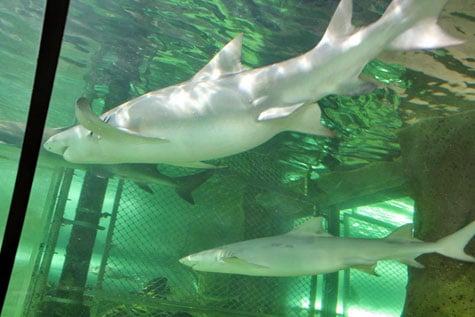 If I’m not mistaken, this was a lemon shark. 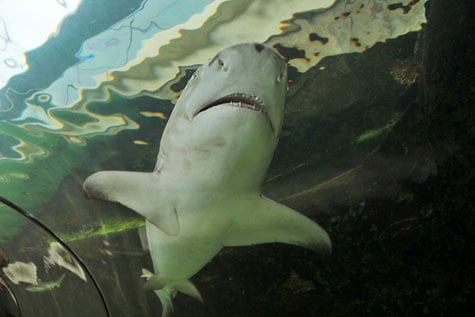 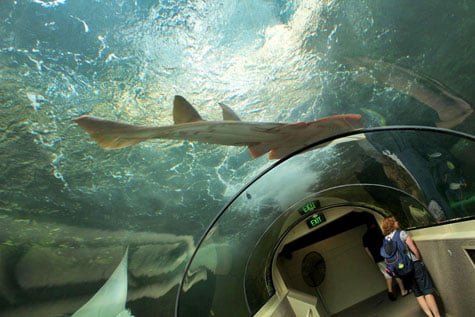 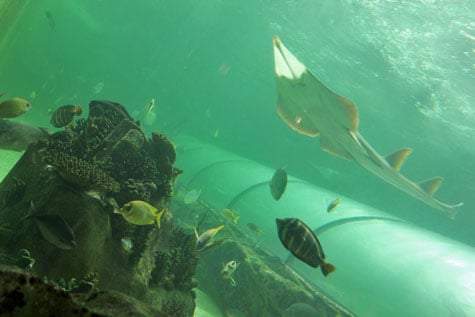 Not sure what type of stingray this was, but it was massive and strangely without much of a tail. 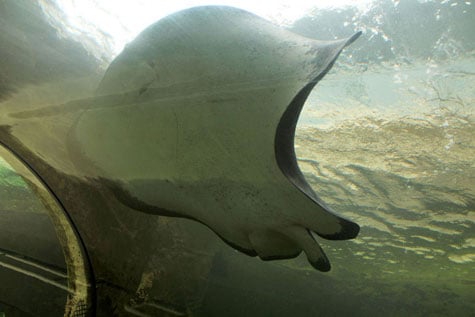 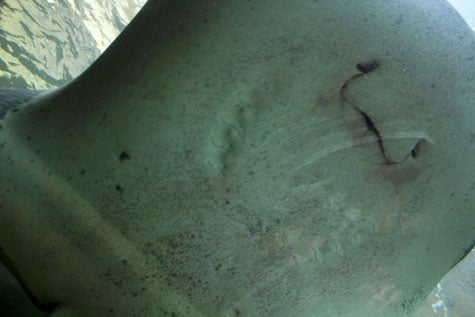 This short section of tunnel had views all around – the walls, ceiling and floor. That little kid was having a blast stomping on the glass with his bare feet. 🙂 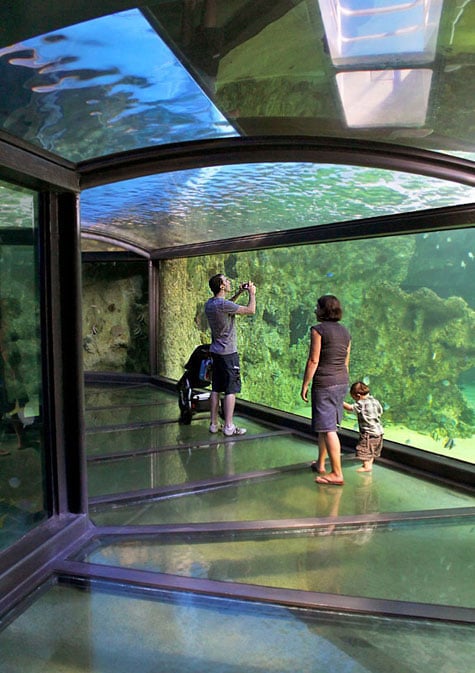 Smalltooth Sawfish – Pristis pectinata – One of Australia’s rarest animals, the smalltooth sawfish is listed as critically endangered worldwide by the IUCN. They live in shallow water around river mouths and freshwater systems, moving between freshwater and saltwater. Relatives of sharks and stingrays, they can grow to an adult length of over 6 meters.

Its most distinctive feature is its “saw”, which it uses to swing at prey by flicking its head from side to side. This stuns or kills small schooling fishes or prawns which it then feeds on. 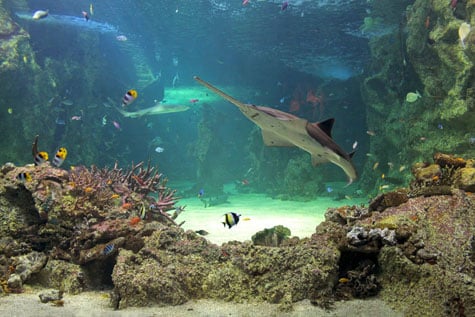 The Sydney Aquarium is home to four of these rare beauties. 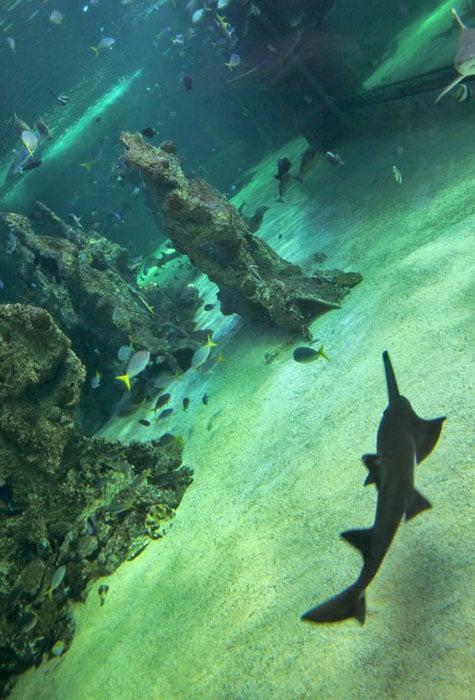 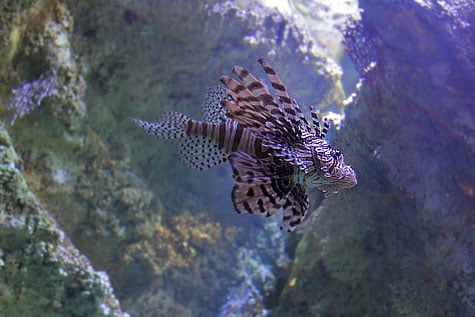 As much as I enjoyed this experience, I have to admit that I was a bit disappointed for not having seen the two dugongs Pig and Wuru. The Mermaid Lagoon was being renovated and won’t be reopened until September 2012, so the dugongs were temporarily taken off display. Apparently, Pig and Wuru are only two of five long-term captive dugongs in the world.

Though I can’t help but be a little sad to see some animals in captivity, it’s comforting to learn that Pig and Wuru were rescued after being found washed up on different beaches in Queensland, Australia. Pig, a 12 year old male, and Wuru, a 6 year old female, were both orphaned and separated from their mothers at early ages.

Pig was released back into the wild after a period of rehabilitation, but was found washed up again soon after and so a decision was made not to release him again for fears he wouldn’t survive in the wild. They now reside here at Sydney Aquarium in a large, soon-to-open exhibit called Mermaid Lagoon where visitors can come face-to-face with them in the underwater viewing tunnels. 🙂

Even without the dugongs however, there’s a lot to see and enjoy here so don’t let their absence stop you. As mentioned up top, the adult entrance fee is AUD 35, but you can get discounts either by booking your tickets early or getting combo passes through their website. You can also reach them by phone – +61 2 8251 7800, or by emailing them via email.