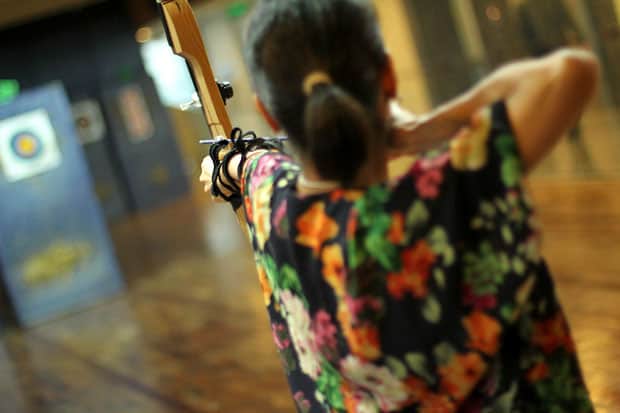 NOTICE: Your health and safety come first. Please adhere to the WHO recommendations and avoid any non-essential travel at this time. If travel is unavoidable for you, then please refer to these advisories on COVID-19 coverage from our friends at World Nomads and SafetyWing. Please be advised that all information on this website is for travel pre-COVID-19. We'll update the information soon as new travel guidelines become clearer.
DISCLOSURE: Some of our articles contain affiliate links. The ones that do will have a disclosure statement at the bottom. You can refer to our privacy policy and terms of use for more information.

Though I was an avid comic book collector as a kid, I admittedly did not know much about him growing up. Unlike Batman, the Flash, and Captain Carrot, I was never a big fan of his, so I didn’t become too familiar with his story.

I knew that his alter ego was billionaire playboy Oliver Queen. I knew that he had a quiver-full of trick arrows, tipped with everything from explosives, boxing gloves, even synthetic kryptonite. I also knew that he had a sexy, heroine girlfriend named Black Canary who, despite being clad in badass biker leather and fishnet stockings, was about as useful a superhero as Aquaman in an Ethiopian drought. Apart from that, I didn’t know, nor did I want to know, anything more about this Spandex-wearing Robin Hood with the cheesy, handlebar mustache.

Then comes that new TV series Arrow, starring a brooding, six-pack-toting Stephen Amell. After just two episodes, Ren and I are already hooked, captivated by all the things that I didn’t know about this rebooted superhero.

For instance, I never knew that Arrow honed his skills while stranded on some mysterious, Lost-like island for five years. I didn’t know that his father blew his brains out to save Oliver’s life, making him promise before his death to clean up the decrepit city that he helped corrupt. I didn’t know that he gave his marks one chance to redeem themselves, before executing the ones who didn’t. Hell, I didn’t even know that he actually killed people. Like many of his cheesified contemporaries from the 80s, I didn’t know that Arrow’s character could actually be dark, and dare I say it, cool.

Thanks to the many things that I didn’t know, but am slowly finding out with each episode, Ren and I are here today at Gandiva, inspired by Arrow to try for the first time, this ancient but exciting sport known as archery.

Here’s what I learned.

I never realized just how beautiful bows can be. Like musical instruments, they’re sleek and elegant with a gorgeous wood finish, kinda like violins that you can kill people with. 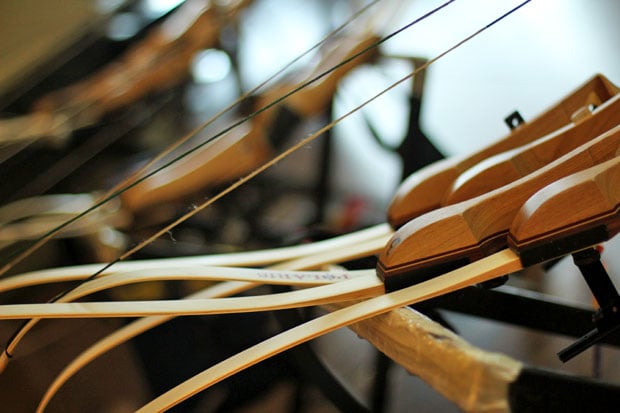 Gandiva refers to the ancient mystical bow of the hero prince Arjuna from the Maharabat story. Possessing gold discs, radiant ends, and an inexhaustible quiver of arrows, Gandiva was bestowed upon Arjuna by the demigods, rendering him invincible and victorious in the Battle of Kuruksetra. 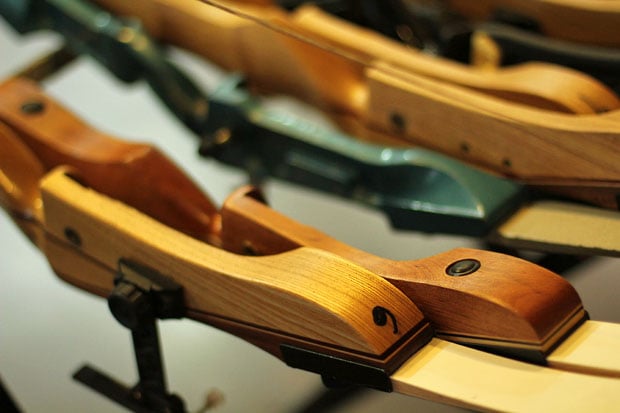 The slings and arrows of outrageous fortune. Do you see that notch at the end of each arrow? It’s called an “arrow nock”, and it snaps onto a specific nocking point on the bowstring. 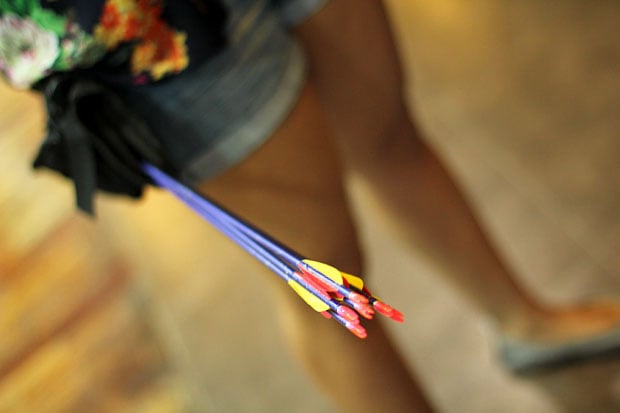 Reneelicious getting ready to shoot. After snapping the arrow in place, she positions it onto the arrow rest. 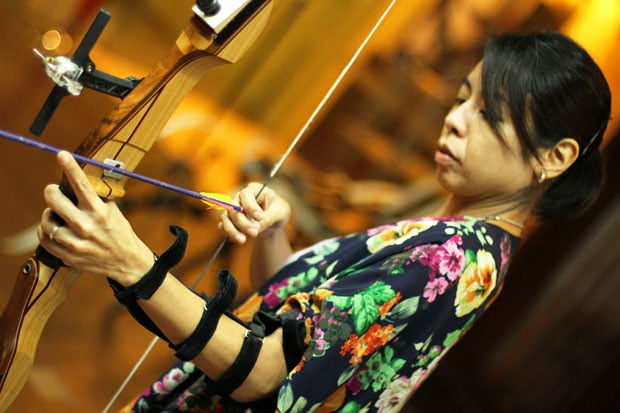 Check out that form baby! We were told by our instructor to keep our feet inline with each other, drawing a line perpendicular to the target. Apparently, this is called a “squared stance”, and is one of three basic foot positions. Telling us to relax, our instructor then taught us to pull the bowstring as far as we could whilst keeping our right elbow parallel to the ground. That black sleeve around Ren’s left arm is for protection against the snap of the bowstring. According to our instructor, it can be quite painful. We believe him. 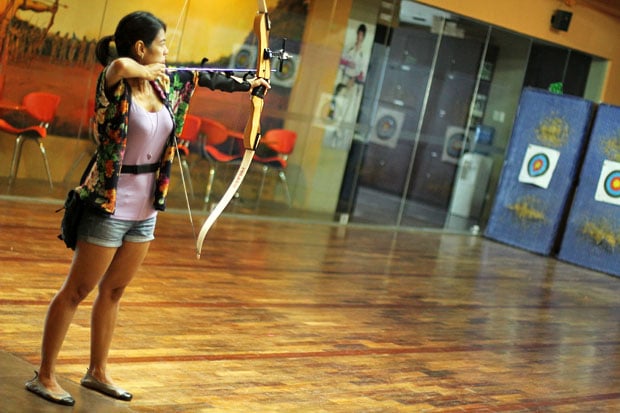 You see that white protruding thing a couple inches above the tip of her arrow? That’s the sight and you use it to aim. The bowstring is pretty taut, so if you have weak arms, the entire bow can shake like a motherfucker while you’re trying to aim. 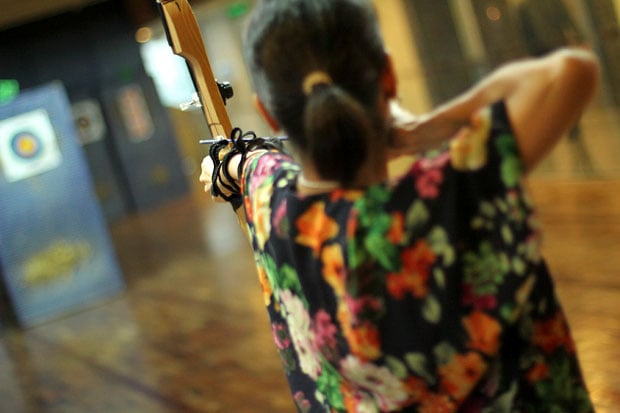 As you can see, our first attempt wasn’t very encouraging. I did manage mild success, hitting the target once. If you’re wondering where Ren’s third arrow went, it flew over the stand and into the back row of targets. 😆

Like Green Arrow. Except Asian, middle-aged, and balding, with a pot belly instead of a six-pack. *sigh* 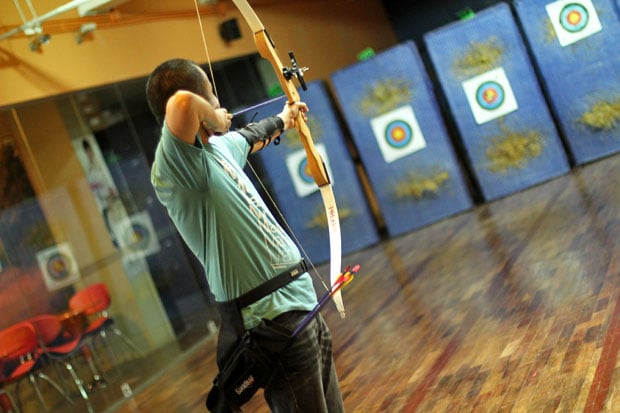 Now that is one HOT archeress. ♥ 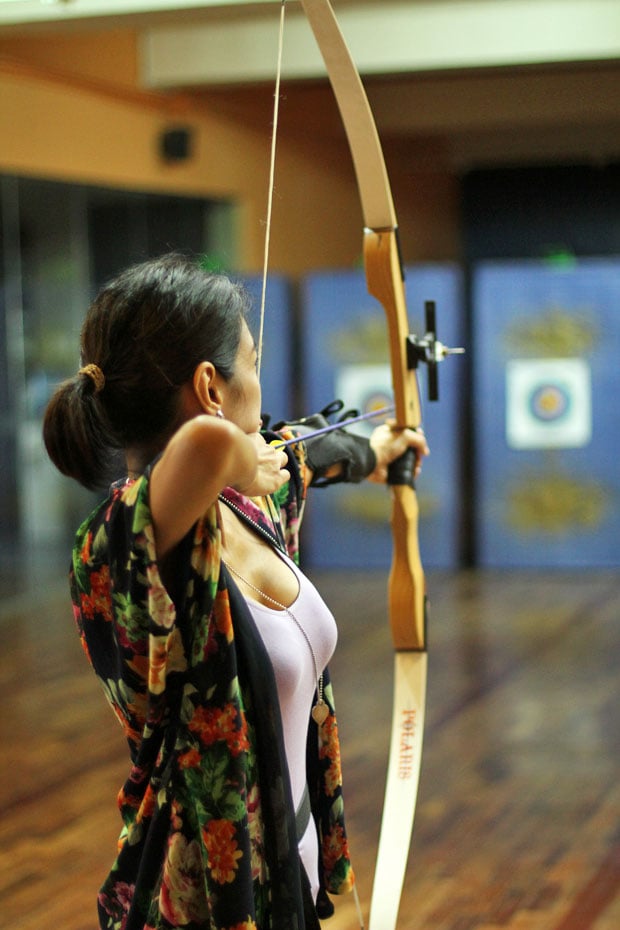 As for me, I took a step back in this round. Though I did hit the bullseye once, two arrows missed the mark entirely. I know what I did wrong too. For those last two arrows, I locked my left elbow to relieve pressure off my arm while I aimed. Obviously, it was a bad idea.

Naks! The former green archer in a zone, pretending to know what he’s doing. 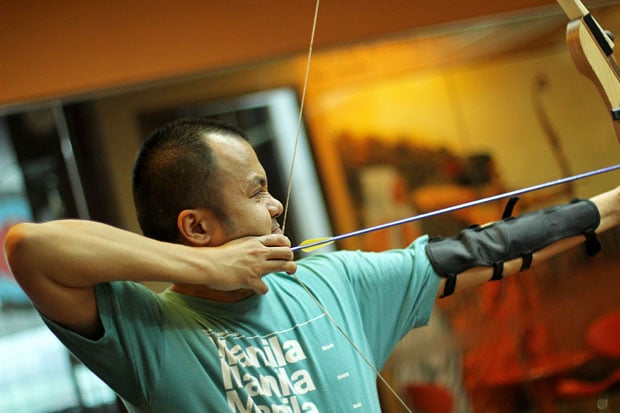 Now that’s how you do it! All of our arrows hit the target this time around, with two of mine even entering the kill zone. Ok, time to leave on that high note. 😆

Though I only posted the first four rounds, we actually went six, but our results from the fourth round were by far the best so I decided to stop there. Like I said above, It’s best to leave things on a high note. 😆

Even though we shot at a slow, leisurely pace, with me even pausing a lot to take pictures, it only took us around 45 minutes to complete those six rounds. That time already includes the brief tutorial we received at the start, making that PHP 600 per hour fee well worth it I think, especially since equipment rental is already included. Archery isn’t something that you come across often here in Manila, so if you’ve ever been curious about the sport, now’s your chance.

Surprisingly, it was much easier than I thought too. Not that I was good or anything, but I honestly saw myself piercing the floor or ceiling with a few errant shots, kind of like a shanked drive in golf. Not at all though. Each and every arrow cut through the air with ease and velocity, piercing the target with an audible, lethal thud. It was awesome.

Ren and I had an absolute blast today, and this is something that I could definitely see myself doing again in the not too distant future. And who knows? Perhaps with some practice and a few choice vegetarian dishes from Gandiva Cafe, I can start pinning tossed tennis balls against the wall and have a slamming, Arrow-like six-pack to boot.

Now THAT would be super. 😉

8shares
There are 2 comments for this article