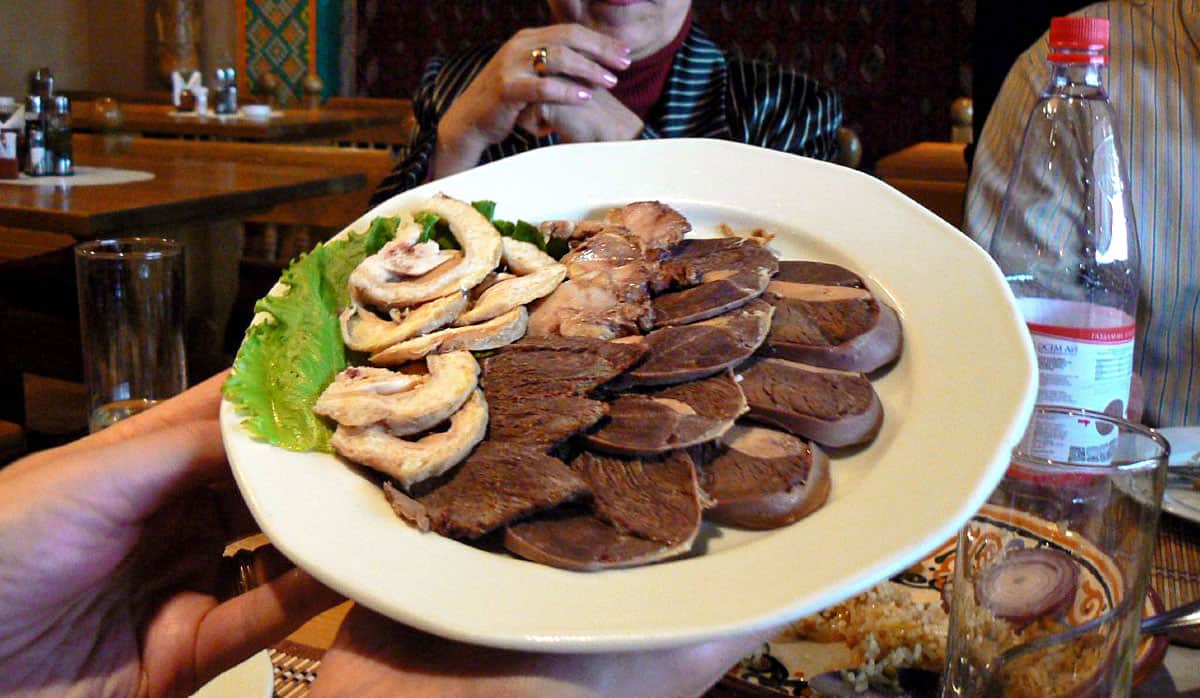 GUEST POST: Peter J. Harris, author of “A Wayward Spirit”, shares with us some of his most memorable meals.

I am a somewhat perpetual traveller and my book, “A Wayward Spirit”, is a collection of notes made during the many years in which I have visited a vast array of countries, journeying on business and more recently on a spiritual path. Like all travellers, I found that eating local foods is part of the experience and along the way I have enjoyed (or endured!) a wide range of memorable meals.

I used to make the fatal mistake of insisting on the local delicacies but paid the price in Colombia where I ate minced beef which was decidedly odd and rushed to the loo after the first course only to return 3 hours later to find the chairs stacked on the table and my hosts consuming their 3rd bottle of wine. We were stopped by the Bogota police on the way back to the hotel as our driver didn’t have his ID and so was hauled off by the police leaving us on the side of the road to make our own way home.

In Kazakhstan, a traditional dish turned out to be horse intestine filled with meat [similar to haggis] and 7 out of 10 people at one formal dinner had to be medi-vacced out of the country.

In Taiwan, it was dealing rather inefficiently with a dish of slippery seaslugs. And then on another occasion, confronting “drunken shrimps”, still moving, as part of a 26-course dinner. In Korea, I discovered bulgogi, which consisted of fatty beef cooked with cabbage, curry and garlic; and on my departure, I was presented with a jar of their national dish kim chi, made from cabbage with garlic, vinegar and chillies and then fermented for five months. It is no wonder that the Koreans are apt to fart a lot and travelling in a lift is always interesting trying to spot the culprit.

In Japan, there were mice embryos and bear paws in honey to experience. And at an expensive fish restaurant I almost fell into the fish pool as I entered in the dim lighting and then discovered that the swimming fish were on the menu. The one I chose was brought to me still moving on the plate as it was being served – a new experience of the Japanese speciality of raw fish dishes, to be followed by mini octopi still crawling on the plate.

There are many more tales in “A Wayward Spirit”, from Africa and Latin America – including travelling on a bus in Senegal with four live, “crapping” chickens and later on a ferryboat with a dead pig! And Vietnam has to be remembered for its traditional coffee; apparently the coffee beans have been fed to ferrets who pass them through their systems before they are ground giving an interesting aroma. And In Tahiti I ordered snails, only to go to the loo to find them being cultivated on the toilet wall.

I was the guest of honour for a meal in Saudi Arabia. We sat on the floor in the Majlis and ate with our hands, which is difficult if you are left handed as it cannot be used, so I sat on mine, only to be served the sheep’s eye which was plucked from it’s head…..

All these experiences contributed to my desire to write about my travels, which started as quest to raise funds for my handyman, Danny Fewtrell, an inspirational character who endured cancer of the stomach and bladder, yet still managed to play cricket after sessions of chemotherapy with a smile on his face. My initial literary efforts failed but were then re-kindled during a visit to Cambodia by seeing the plight of the children living on the smoking mountain of refuse in Phnom Penh (the Dumpsters). Many of them have been abused, orphaned and abandoned, so now I am trying to walk my talk and through this book, give these youngsters the chance to get a step up the ladder of life, as there is always light at the end of the tunnel.

According to a number of my chums, I have packed a lot into my life as I remain forever curious. Along the way, I have faced life-threatening experiences in two continents and endured wrongful imprisonment on Greece. But I hope some of the stories in my book also makes you smile…..

*Header image by Sara Yeomans [CC BY 2.0], via Wikimedia Commons

Peter J. Harris is the author of “A Wayward Spirit”. It’s available from Amazon as a paperback or e-book.